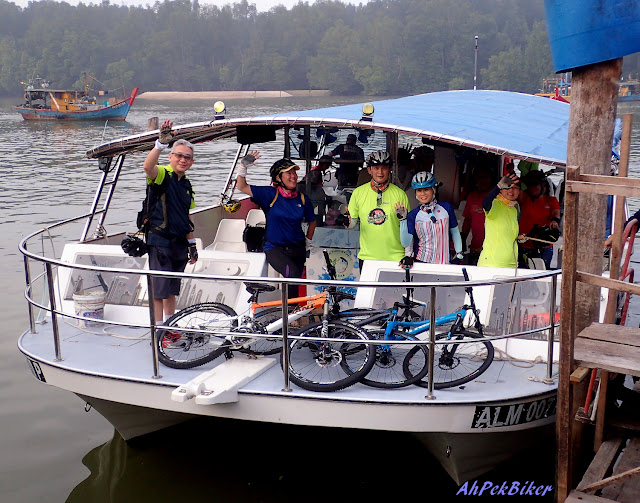 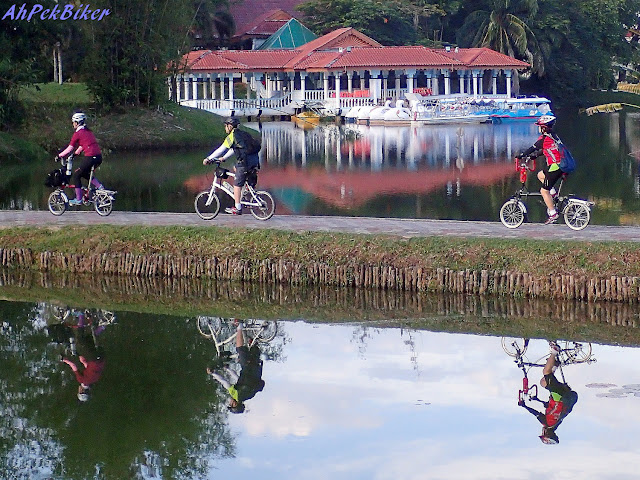 On Friday, many of us had arrived at Taiping and did a short acquaintance ride around the town; the highlight being meeting another group of friends (who were doing a parallel ride on this same weekend) at the renown "Fireworks" Char Keow Teow Stall in Simpang. Then yesterday we did a loop of the southern outskirts of Taiping down to Trong and back where we had a good porridge lunch at the Light House Seafood Restaurant in Matang and also visited some farms and the Sepetang Charcoal Factory.
Some of us (yours truly included) stayed the night in Kuala Sepetang and had a good dinner at Xin Restaurant; while others stayed in Taiping. Today we are heading out for another good adventure, a multi-mode bike packing one that include boat and rides. Unlike our previous tour here in 2014, we will be doing a reverse route ending in Parit Buntar with some new interesting destinations. Even just after two years, things have changed in this area, some for the better, some for worse; read on to find out.

Ride Route - Taiping>Kuala Sepetang>by boat>Kuala Gula>Kuala Kurau>the Bund>Tanjung Piandang>Parit Buntar.
The route is a multi-mode one with a boat ride from Kuala Sepetang to Kuala Gula, and a train ride back to Taiping and Kuala Lumpur. This time round, instead of several motorised sampans, we took one larger tour boat that could fit all of us and our bikes in. 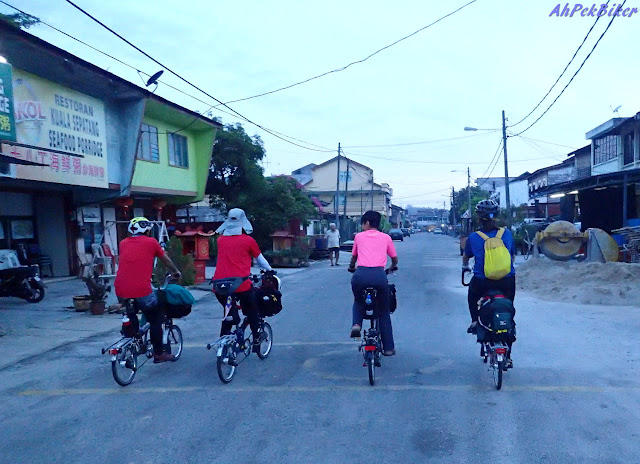 In the early morning, we headed out from our home-stay at Kuala Sepetang Inn and cycled the short distance to one of the coffee-shops in town for breakfast. At this time, although the town has woken up, the tourists have not arrived and it was relatively peaceful and quiet - we could even cycle four abreast without obstructing the local traffic! 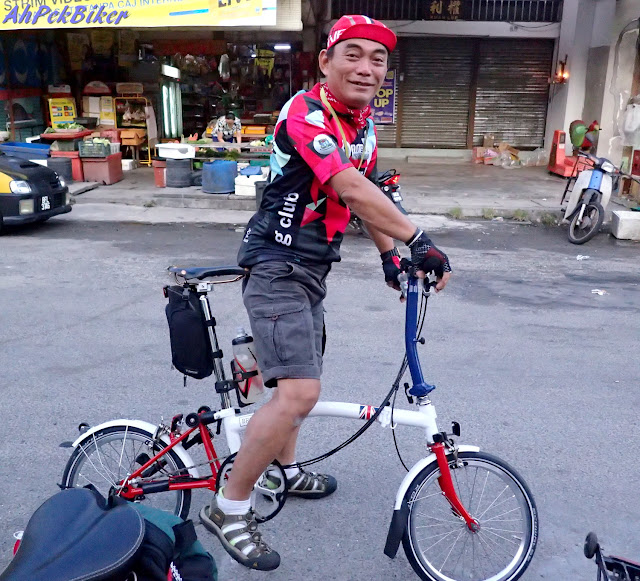 Our timing was just right, en-route we bumped into Ho, Nellie and another friend. They had cycled from Taiping to join us for breakfast and to later send us off. And we had this great opportunity to try out Ho's Brompton World Championship 2016 Special Edition. It was a beautifully sleek machine with gear ratios made for fast cycling. 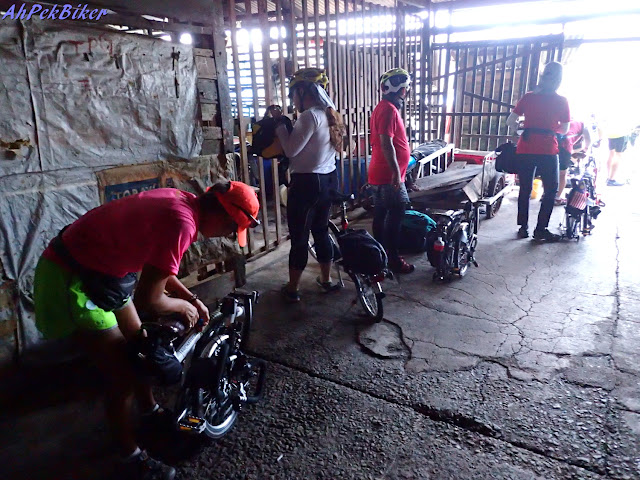 At the jetty next to the Happy 8 Hotel, we met the rest of the gang who had rode down their Taiping home-stays. In it's dim atmosphere, without our bike we would look no different from illegal immigrants waiting to board boats. 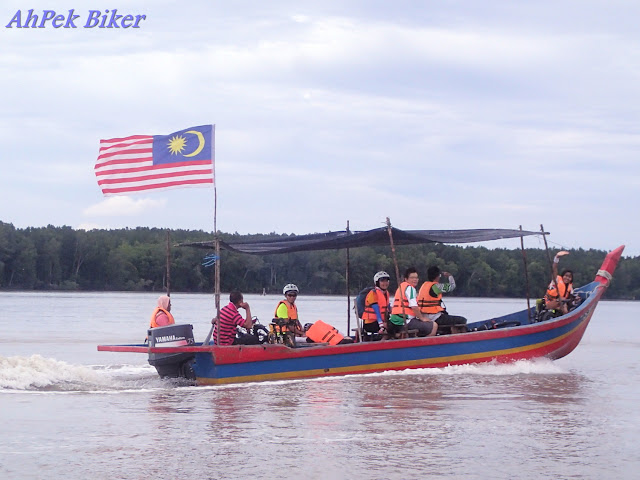 The boat came, it was a huge boat, one that is used to take tourists out to watch eagle feeding, etc. (see top-most photo). It was definitely unlike the smaller motorised sampans (shown in above photo) that we took during our last tour.

Both large boat and sampans have their advantages. With the large boat all of us together with our bikes could fit into a single boat, seating was more comfortable (comfy enough for later snoozing). With the motorised sampans, only five or six of us could fit into on sampan but there was the high-adrenaline thrill of stronger wind-in-the face experience with some splashing water onto the face experience too - a real sea salt adventure. 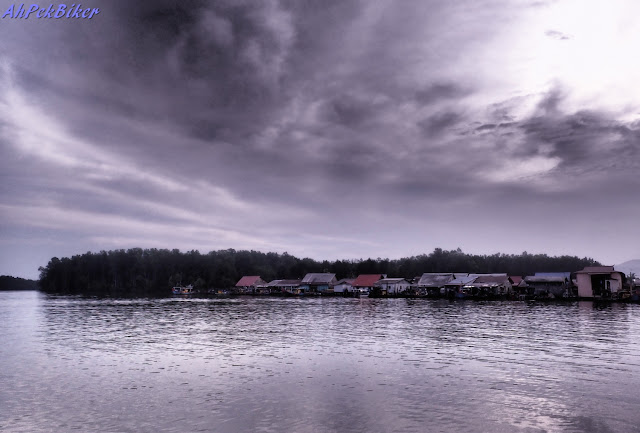 A look at the Kuala Sepetang fishing village from the sea as we set out, the sun was just coming out to paint the sky blue. 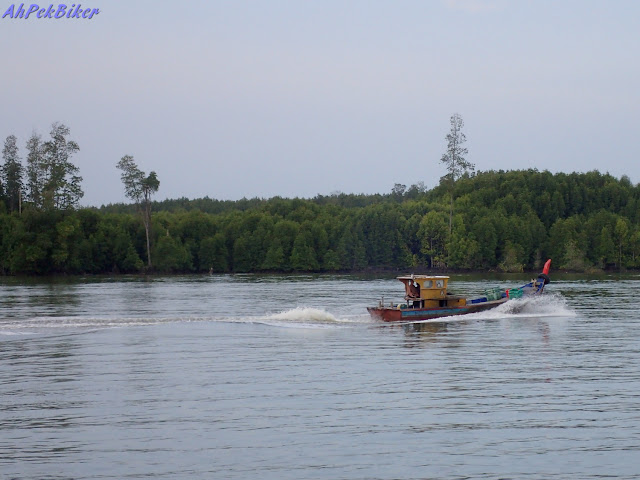 Further out, we pass by newer mangrove swamps. These are young mangrove trees (about five years old) which are not ready to be harvested for making into charcoal. Mangrove trees takes about thirty years to grow to a suitable girth (8-9 inches in diameter) before they can be used for manufacturing charcoal, so this young trees still have a long way to go. 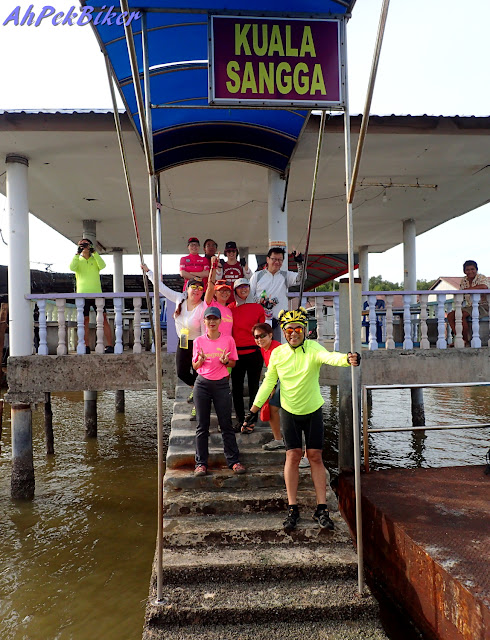 Within less than half an hour we docked at Pulau Sangga. This island was a former pirates' haunt, today it is a peaceful village occupied mainly by fishermen and their families BUT who knows, perhaps there are still pirates living up in the hills, after all the island is quite large; so we spoke with care here. Any wrong words and alas!, we could be walking the plank!
Most of the houses sit on stilts, there are no roads here hence no cars. In fact Kuala Sangga, just like it's former pirate days, is till only accessible by boats as there are no roads leading here.


The place had not changed much except the cute little girl who followed us around the last time was not here anymore, she had grown up and is now attending school at the mainland. 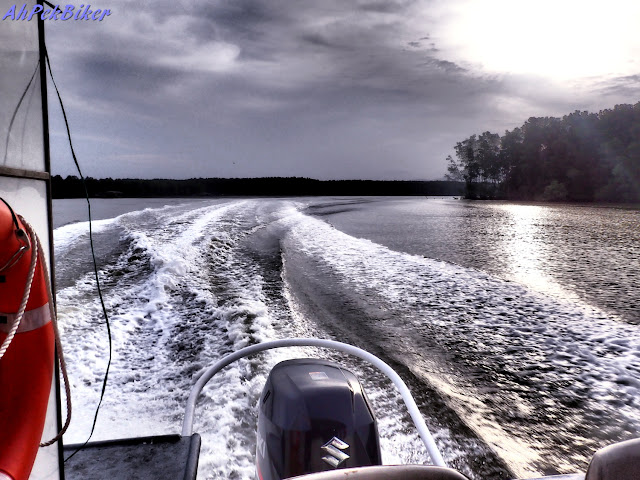 We left Pulau Sangga, leaving the Sungai Sangga Besar estuary and headed out for the open sea. Out here, the pilot throttled the boats engine faster and with a powerful roar we were skimming the sea's surface leaving a wake of white water behind us. The sea blew into our faces, it's salty air freeing our souls. Man! This is life! 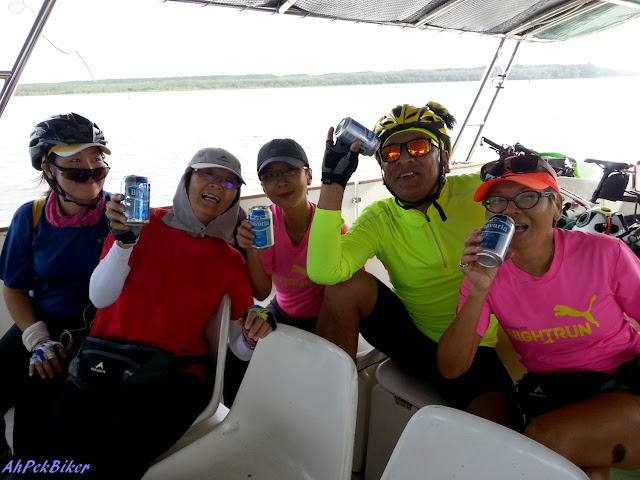 Soon we were like old sea salts, breaking open "Bavaria" beer and tossing away. Luckily we each had only one can each, and no one fell into the sea for a "man overboard" situation.
By the way, many thanks for the beer Ho! 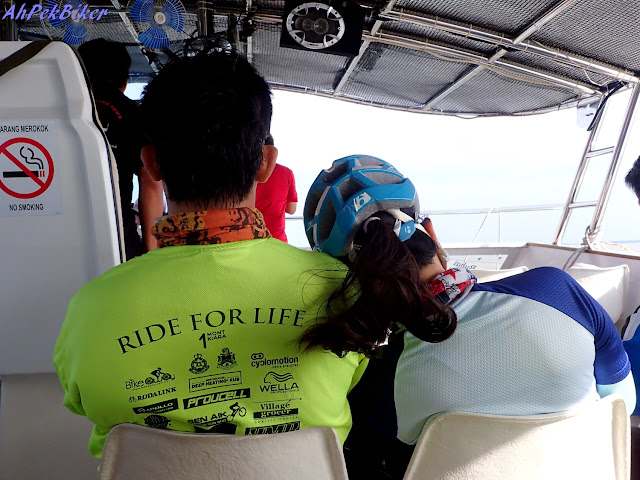 The larger boat was less rocky than the sampans, and soon it's slow rocking motion lulled some to sleep - wonderful to have a loving shoulder to lean on right now, isn't it? 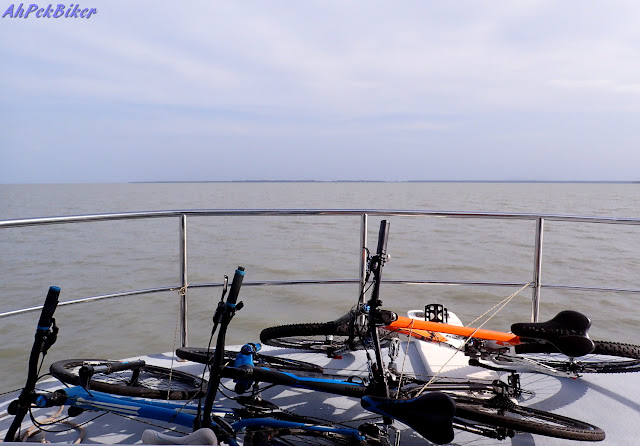 Our bikes also settled down, some lying on the bow, enjoying the sea breeze too.
But I was getting a wee bit nervous, the captain while piloting the boat was peering right and left, nervously on the look out for something. Hopefully he was not looking out for those Yo-Ho-Ho / Skull & Crossbones types.
My apprehension calmed down as he made a turn inland; he was actually looking for the river mouth of Sungai Gula, where he headed in to dock at one of many fishermen's jetties lining the river. 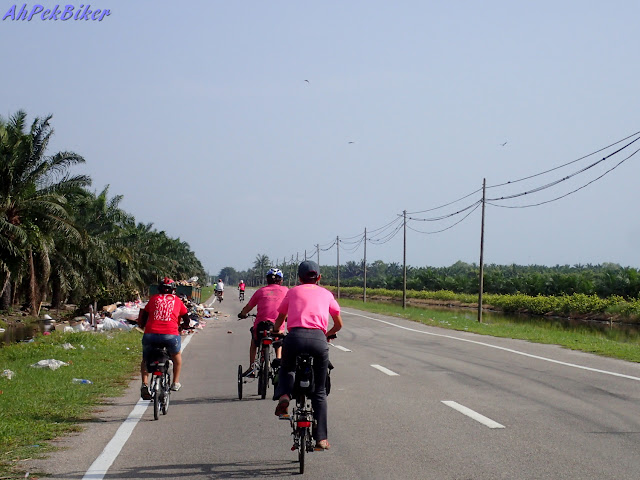 Eagerly we disembarked, unfolded our bicycles and were soon riding down Jalan Kuala Gula. The road was lined with oil palms which were set a distance from its side thus not affording any shade for us. But we were not complaining, we were just happy to be pedalling away. Patrick on his folding tricycle was one of the happiest! 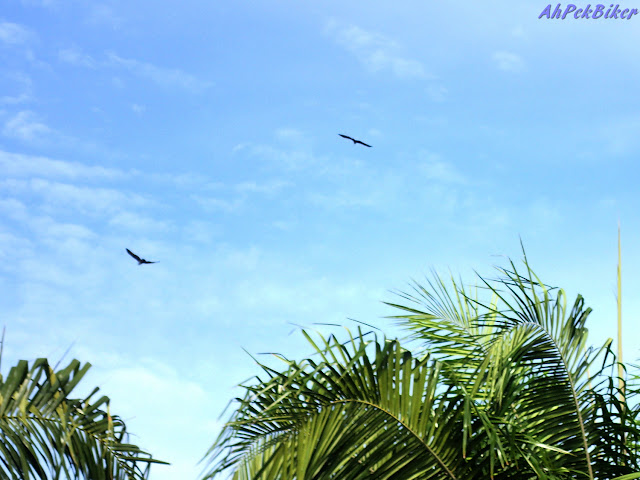 Nearby some birds were circling above. No, they are not vultures preying for one of us to slow down and be isolated from the rest. These are sea eagles, many of which can be found in this locality. 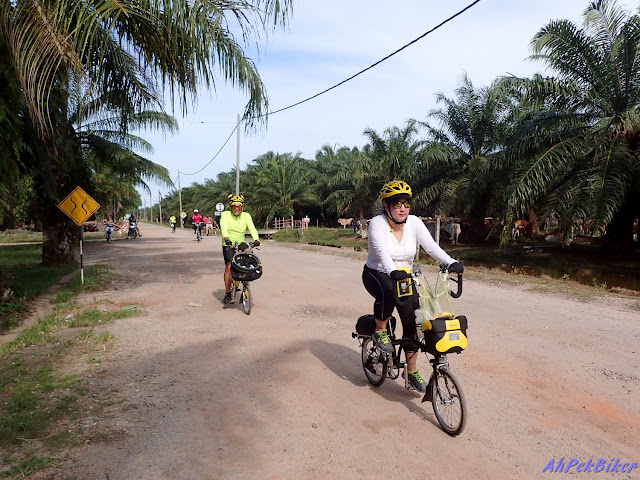 Slightly ahead, we mad a left turn into the private estate roads of Eng Thye Plantations. This were un-tarred road covered with sand, some of which a relatively deep, so we had do cycle with care. But here the palms came nearer and gave us some shade. Here too, cows were grazing nearby, a few stopped to take photos of them. 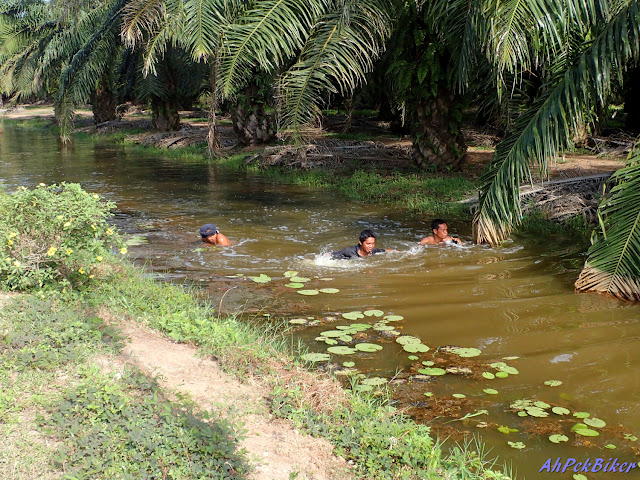 At one of the canals, three local boys were swimming but not just for the fun of it. They were waving the hands rapidly underwater, swirling the water to make lots of noise and commotion, trying their best to drive fish to a waiting net down stream. 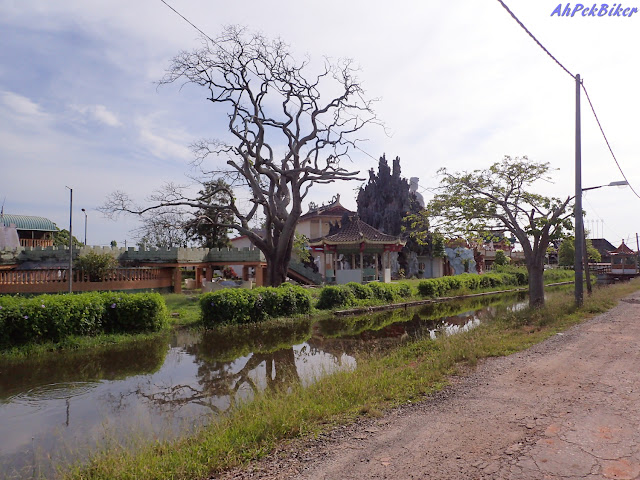 Soon at the road side, a surrealistic view of a leafless tree... 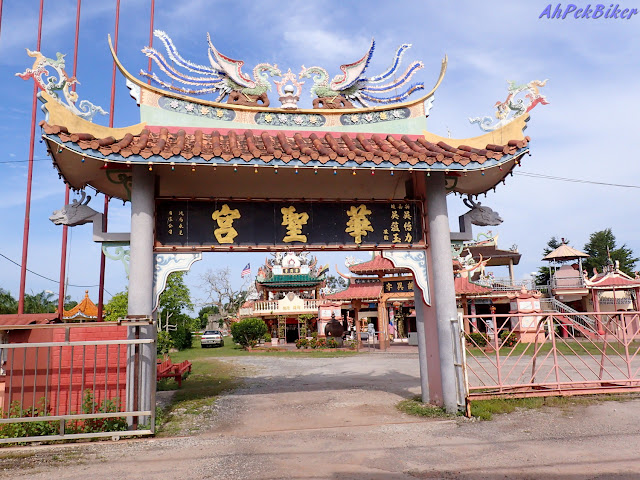 ... which led to the entrance archway of the Hua Seng Keng Temple. Notice the top of the arch roof is decorated by two phoenixes, seems like here they take precedent over dragons.
I had seen beautiful photos of this temple and had requested Wong to bring us here; most kind of him to include this temple into our route. 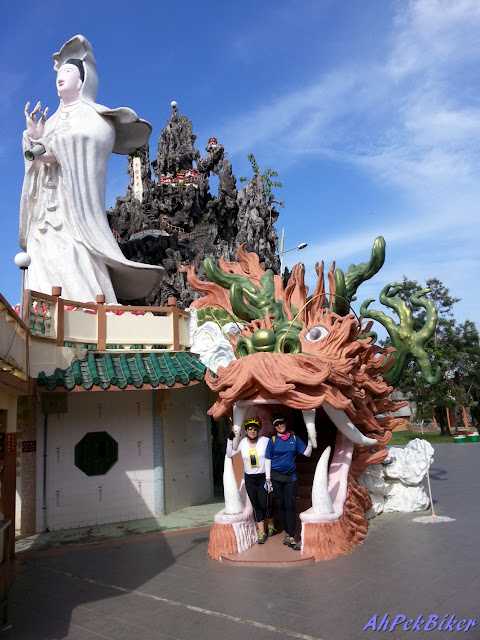 Inside, there were beautiful and colourful statues. One was of a large dragon with fangs sticking out from its opened mouth. But this was a friendly dragon, and visitors get "swallowed' into its mouth as there were stairs there leading to a higher platform where a large statue of Kuan Imm stands in a calm praying position. 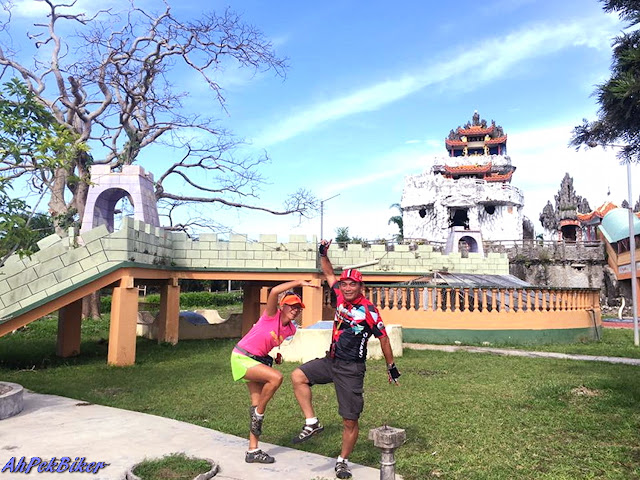 There is even a miniature Great Wall here that leads up to whitish mini-mountains with shrines on top. Time for some Kung-fu stances! Sorry, wrong place for kung-fu as this is no Shaolin temple but rather a temple dedicated to Tua Pek Kong. 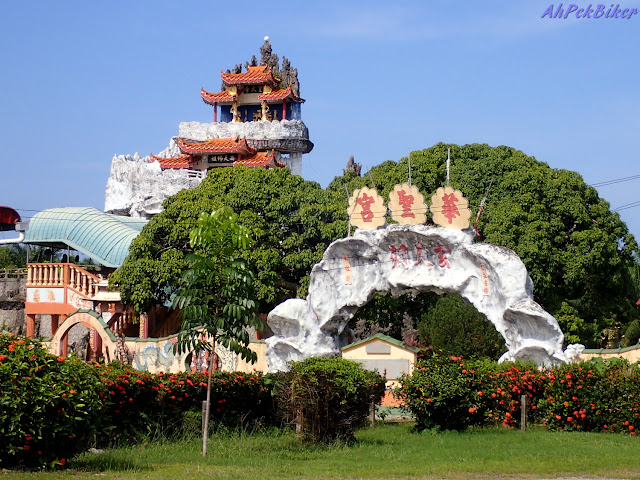 The shrines atop the white "mountain' are not that miniatures, there are platform balconies there and inside are altars for praying. 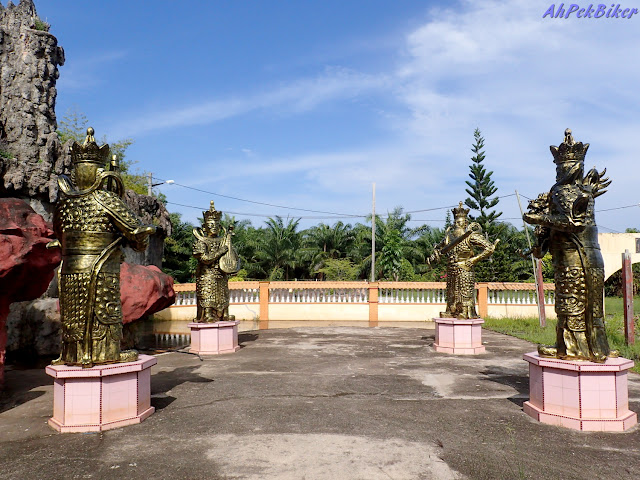 To another side, a more serious scene: fierce looking guards watching over an entrance door that leads into a grotto below the mountain. 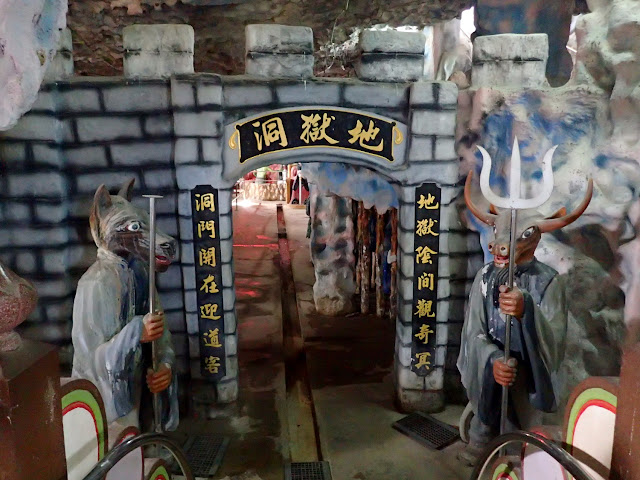 This grotto is the darker side of the temple, it leads slightly downwards like descending towards the nether lands which in a way it was, for here there were rooms displaying scenes of the Chines hell. Two statues guard the entrance, one is a horse-face guard and the other cow headed. These are guardians to the underworld. 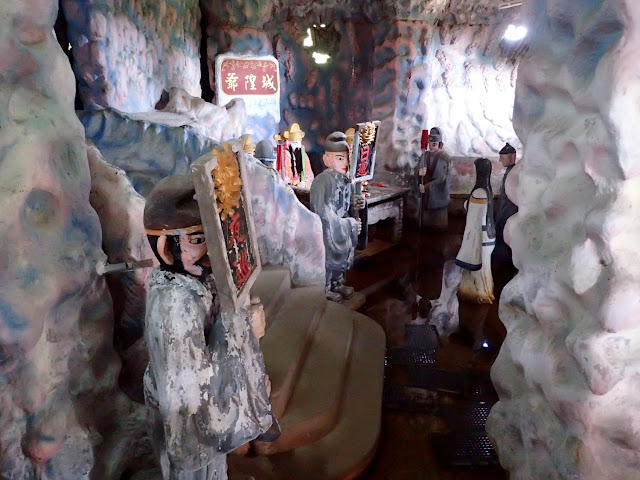 Inside are several displays of scenes from"hell", the above is the Judge of Hell, laying out penalties to spirits who have just arrived. 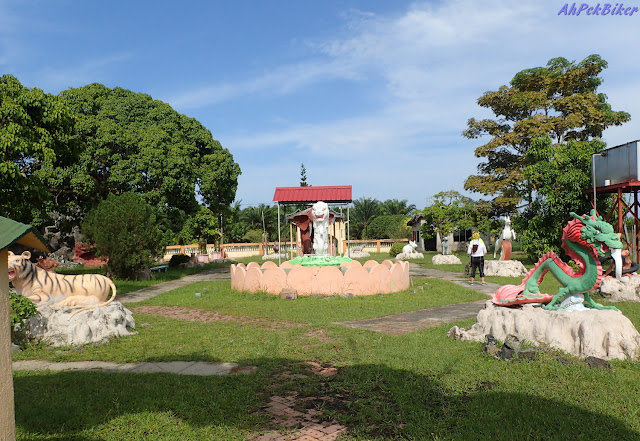 We ascended from the underworld to the heavens, to a Chinese Zodiac garden which displayed all twelve animals from the zodiac, plus one extra .... 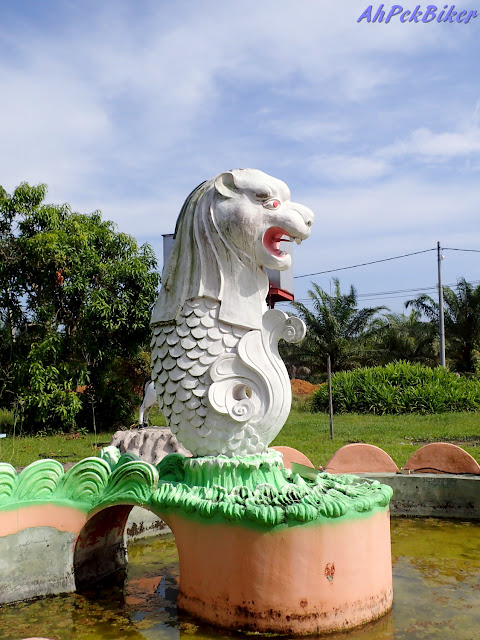 ... a merlion. which I think is also a fountain as it faced a pond. Unfortunately the fountain was not working and it was not spouting water from its mouth like the Merlion of Singapore.
It was a beautiful garden to visit, with many displays to appreciate. Too bad that it was a bit run down with faded paintwork and non-functioning fountains, hopefully they will be able to get more funds or sponsors and also volunteers to upkeep it.

We rode off, not into the sunset but to continue our little adventure. Kuala Kurau, here we come!