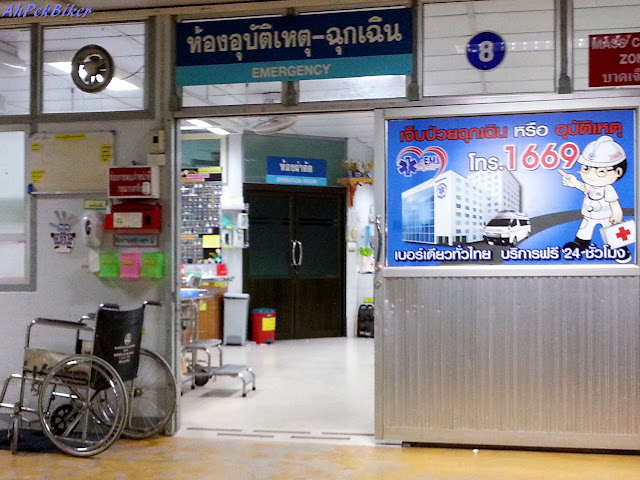 Route Recommendations :
1. We were recuperating after a couple of us fell sick with diarrhoea, so not much cycling. Only cycled to the Khlong Thom Hospital to visit our buddy who was admitted.
2. Accommodations
- At Khlong Thom, we stayed the Sweet Dream Resort (GPS: 7.94067, 99.15031) which is located within an oil palm estate and has it's own mini-market.
- At Phuket Town, our accommodations for two nights was Pho Thong Phuket Hotel (GPS: 7.88405, 98.39302).
3. A medical emergency cropped up and it was fortunate that we had the Thai nationwide emergency number 1669 to call for help. 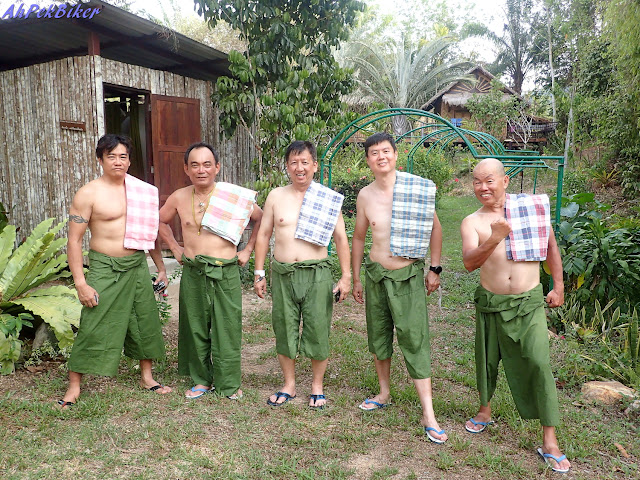 The day before we had arrived at the Khlong Thom after cycling fifty odd kilometres from Wang Wiset. We did pamper ourselves with a stay at the Wareerak Spa Resort, it was a expensive than our usual budget motels accommodations but was worth it as it included breakfast and a hydrotherapy massage. Our night's sleep at the relaxing resort was interrupted in the middle of the night. Let's see what happened.

There was not much of cycling while we were recuperating, for me it was just one cycling trip from our new accommodations, Sweet Dream Resort, to the hospital to visit our buddy. We had shifted to this resort as it was much closer to the town and the hospital than Wareerak which was more than 10 km. away (see above map). 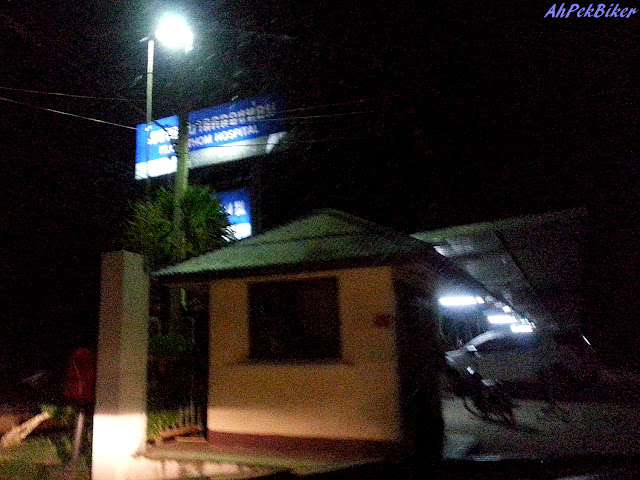 The hot spring spa and the accompanying massage at Wareerak was really therapeutic. Feeling very relaxed, we retired early at around nine and was soon snoring away. Roger, Kit & me shared a room, while Yong Sin & Sin shared another. Then ......

12:00 midnight - "KNOCK! KNOCK! KNOCK!" The loud banging woke us up; it was Sin and he informed us that Yong Sin had fainted while trying to go to the toilet.
Wareerak staff had all gone back and their reception had closed; they had left a number for us to call should we need anything. I called that number, it was for a Mr. Choo, trying to explain to him our emergency and mentioning sick and hospital, but he could not really understand my English. In the meantime Sin had called the Thai nationwide emergency number, 1669, which we had seen on a roadside sign while on the way cycling here. Through several attempts, he managed to get through to someone who spoke English but they could not really identify our location.
In the meantime, Kit ran to the dining hall and saw Choo running in. He HAD heard me! We called the emergency line again and had Choo explain to them in Thai our predicament and location, and they said they will send an ambulance in. To cut the story short, we lifted Yong Sin onto a bed sheet to Choo's truck and started driving to the hospital where halfway we met the ambulance and transferred our friend over. 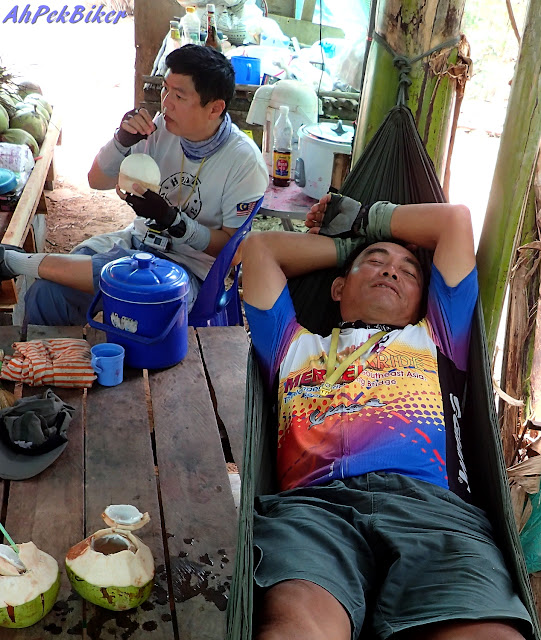 Yong Sin had already a few hours earlier complained about diarrhoea and had gone to the toilet several times. The cause of his problem was the coconut water that we had at the road-side stall on the way in to Wareerak. We already had one round of the coconut, the fully un-husked one where they cut the top open. It was good as they had chilled it in an ice-box and we went for seconds. Unfortunately, they were short of the un-husked ones and offered Yong Sin & me the husked ones where the top had been cut to expose the flesh. While drinking these, we felt that they were a bit fermented and has some gas, somewhat tasting like Sprite. We though nothing of it and finished them... but we were wrong!
While we were waiting for Choo, I myself had to run to the toilet twice.
While Yong Sin was admitted, I sought outpatient treatment and was given a jab together with some medication. The hospital required someone to stay overnight with Yong Sin and Roger volunteered as he knew a smattering of Thai. Fortunately, Yong Sin was warded at a single-bedded VIP room (i.e. upon request & of course have to pay more) and there was a sofa for Roger. The rest of us went back to Wareerak. 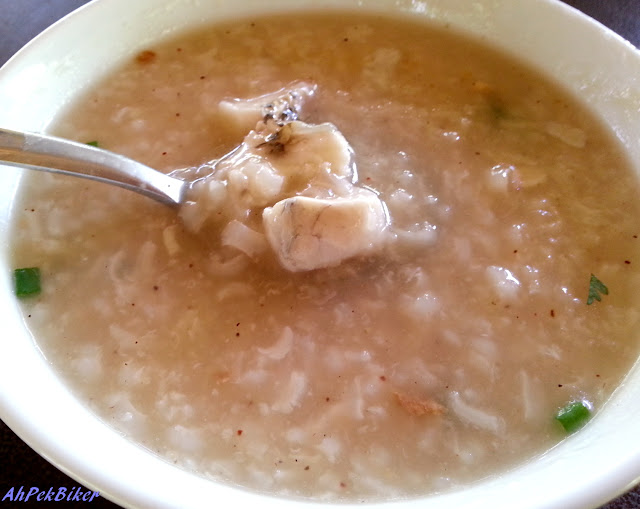 My lunch & breakfast at Wareerak - fish poriddge, I dared not risk taking anything spicy.
For the next three days after this my diet was mainly buns (from 7-11) with Ovaltine. 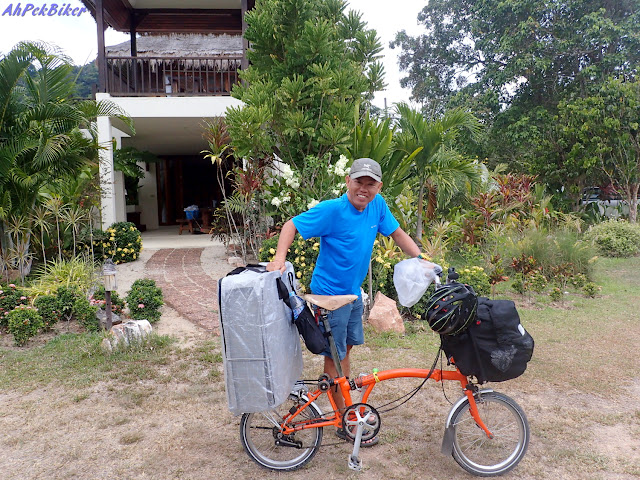 In the morning, Kit borrowed a motorcycle and together with Roger went hunting for accommodations closer to the Khlong Thom Hospital. See, Wareerak is more than ten kilometres away and we wanted to be closer to our buddy to visit him. I had packed Roger's stuff, while Sin packed Yong Sin's. Here he is with his Brompton ferrying Yong Sin's Brompton (packed in a Dimpa bag).


Time to check-out and go to our new place. Wareerak's supervisor, Wanpen, was most helpful and arranged for transport to ferry us out... 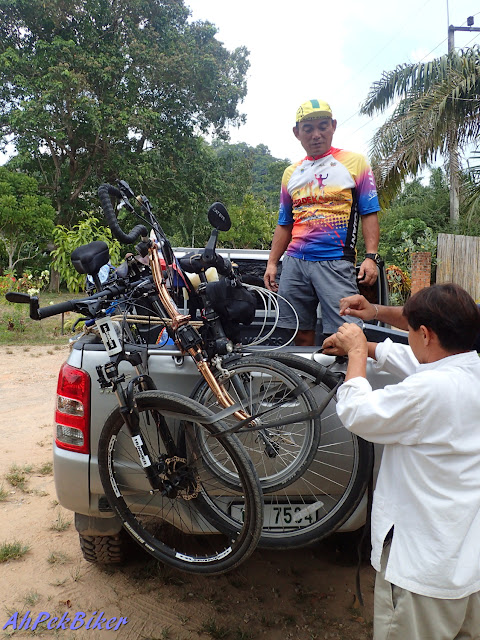 ... a truck for our bikes (at right is Mr. Choo who had helped us during the night of our emergency) ... 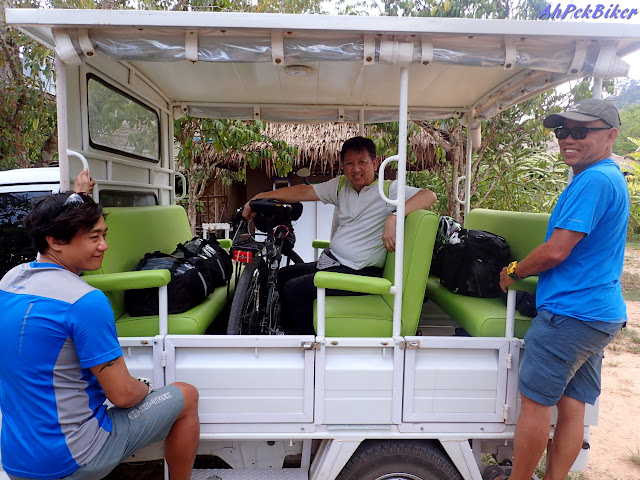 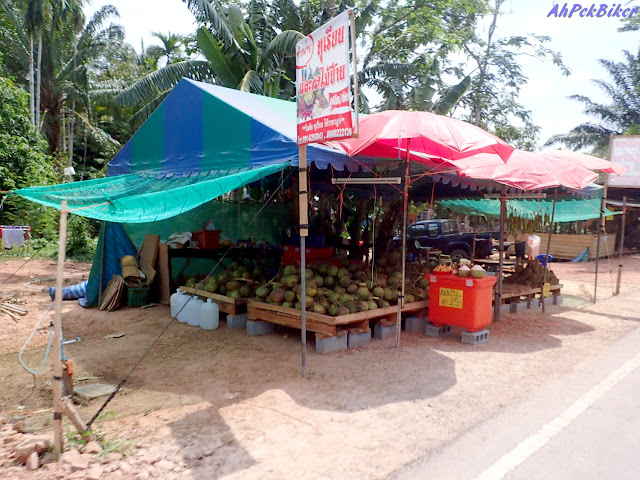 On the way out, we passed by the ill-fated stall that we took the coconut water. I felt like wanting to tell them off for putting us in this predicament; but we are in Thailand now and have learnt the Thai way of patience and put it to just our karma. Perhaps our this incident did help us avoid a more serious mishap, who knows? 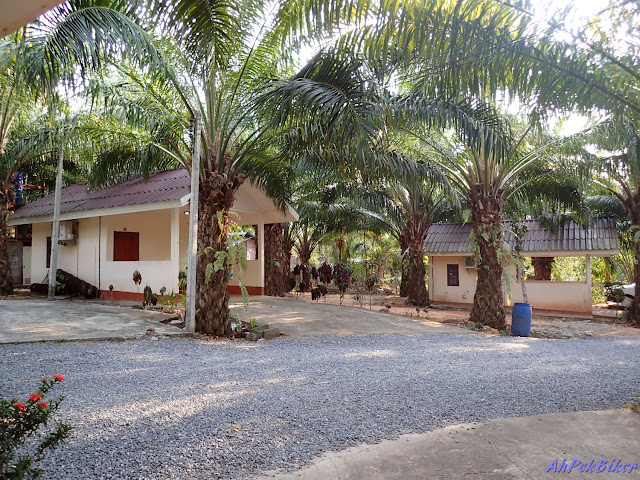 Our new home for the next two nights, while waiting for Yong Sin to recover - the Sweet Dream Resort (GPS: 7.94067, 99.15031). It's a nice place set at the edge of an oil palm plantation with individual chalets. We took one each at a price of 395 Bahts each per night. The resort owner, Mr. Somneuk, was most helpful coming to our aid to help ferry a weak Yong Sin back from the hospital when he was discharged.
As for me, these three days were the most unpleasant days of my trip here. The resort was nice but the hot weather was a deterrent to come out and enjoy the greenery. I stayed cooped in the room, dutifully taking my medications. The room had cable TV but the only shows that came through clearly were the shopping channels which I watched to kill the boredom .... and every once in a while made a run for the toilet. 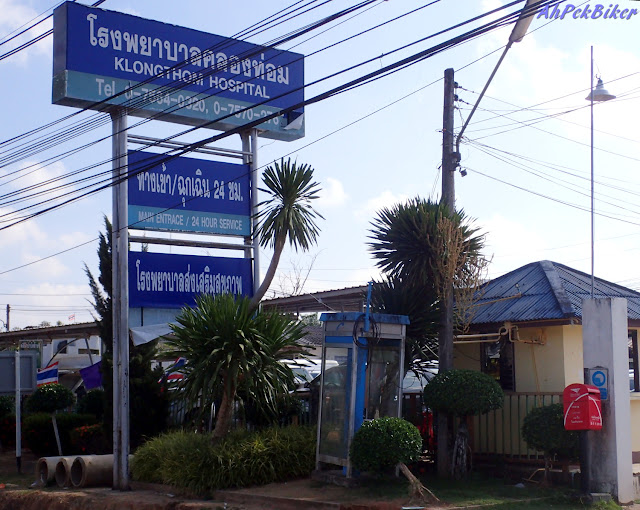 Day 9 - I had sufficiently recovered (or so I thought) and joined my friends on a cycling visit to the hospital to visit Yong Sin. In the day time it had looked less ominous then the nigh of our emergency. We were there for three hours in the air-conditioned room, after a while I felt cold and started shivering. So I went out to the corridor to sleep it off on a concrete bench. I had come down with a fever. 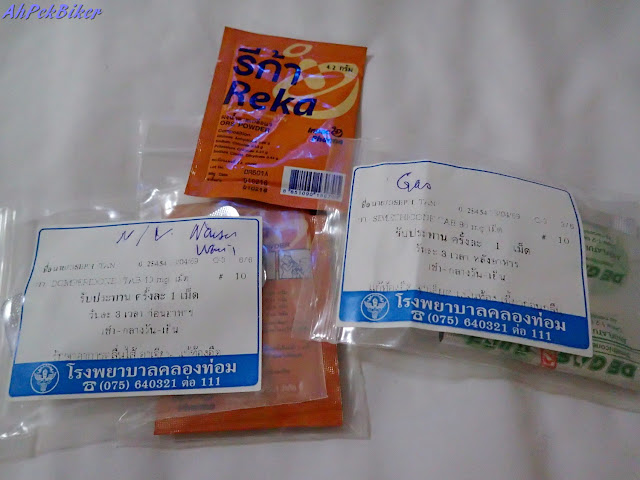 Back at the motel, my fever had not abated. Again Mr. Somneuk came to the rescue and took me out to a clinic in town, the Supaluck Clinic - sound like a lucky name, hope it will give me super luck and recover fast. The clinic was packed with locals and we had a long wait. Somneuk said that there was another clinic in town, but this one is best and that's why there is a long queue.
He was right. The clinic's doctor, Dr. Thirapan, who spoke very good English, was very understanding and prescribe additional medication for me together with a three-day course of antibiotics. After taking his medication, I started sweating and the fever came down. 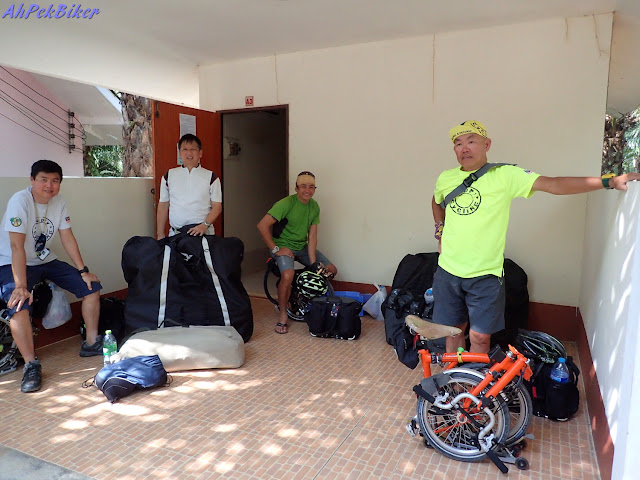 Day 10 - The previous afternoon Yong Sin had been discharged and here we are waiting for our transport to take us to Phuket. We had spent three nights in Khlong Thom instead of one and now, short of time, we had to change our plans and take a van to Phuket.
We had to forgo cycling to Krabi, staying a night there and then taking a ferry (at Chao Fah Park Pier) over to the Ko Yao Noi (Manoh Pier) for a night there. We were then suppose to do a bit of cycling and take another ferry from Ko Yao Yai (Loh Jark Pier) to Phuket (Chianwanich Pier) and then cycle onwards to Phuket. See above maps for the aborted routes, the ones in orange and green. 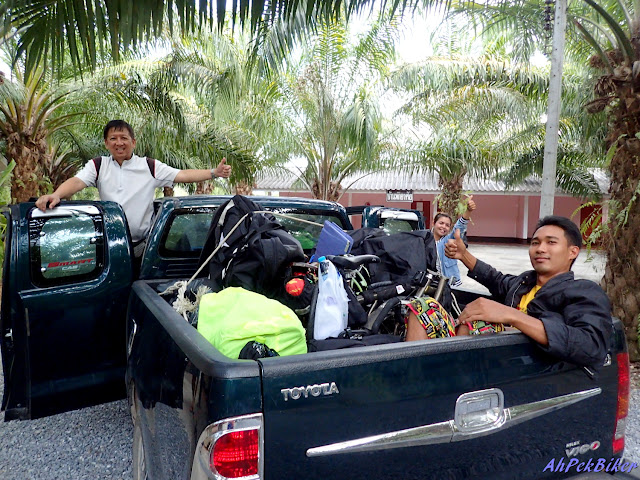 We had requested Wanpen's help to hire a 12-seater van to come at 9:00am and take us to Phuket. She failed to get a van and instead came at 3:00pm with a pick-up truck to send us herself (Hired vans are not easy to get at Khlong Thom, and any would have to come from Krabi). 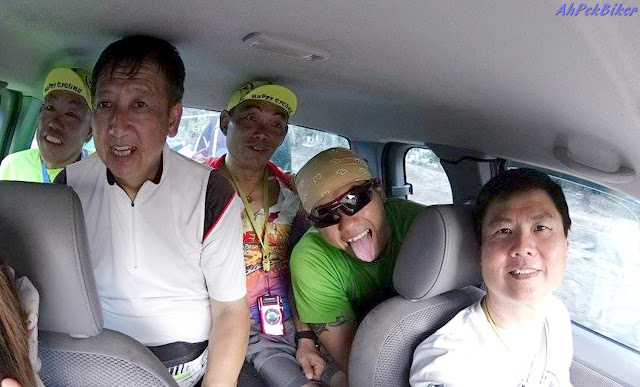 With six of us in the truck, which only has a small cab section, four of us squeezed like sardines at the back. 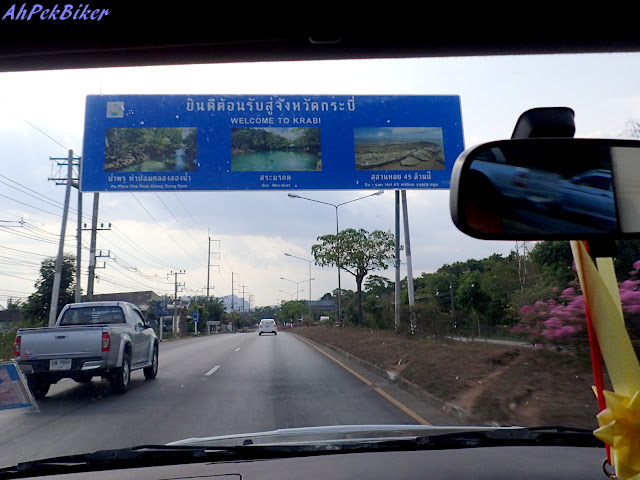 4:10pm - We drove by Krabi but did not enter the town. It did evoke some regrets on not being able to cycle here ...

... and visit the Ko Yao islands which, although not a popular destination with tourists, are very beautiful. 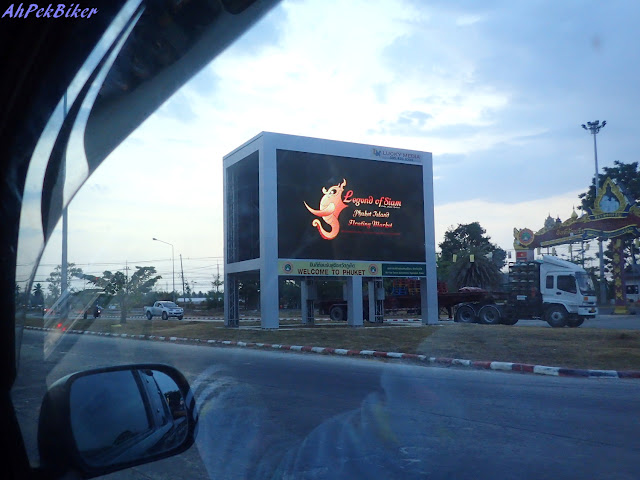 Wanpen had taken a short-cut via route 1002 and our journey went smoothly until we hit the outskirts of Phuket City at around 6:00pm. 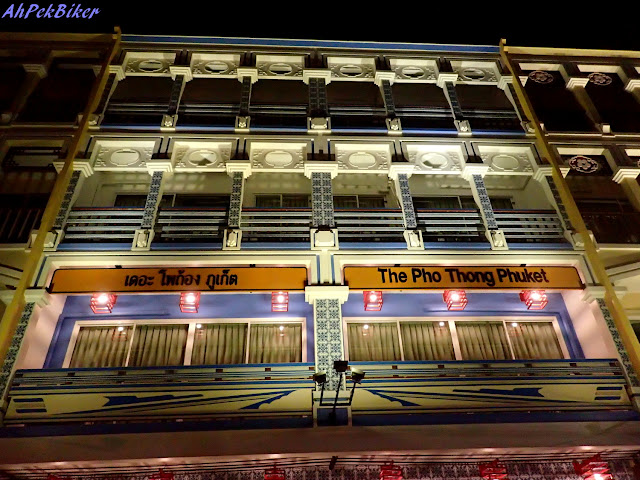 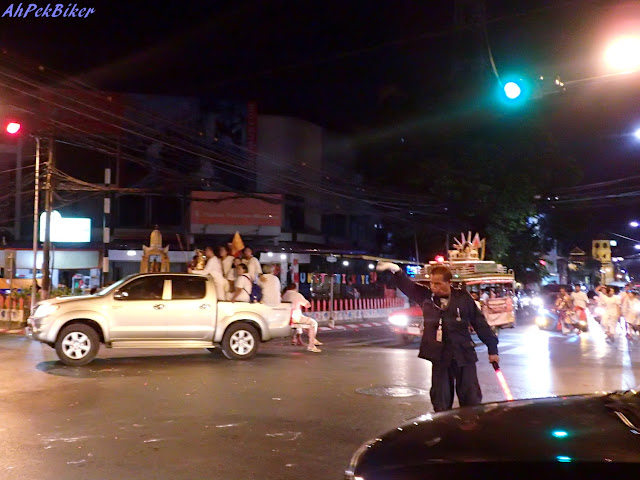 Refreshed, we took a short walk out to Phuket Old Town find a suitable place for dinner. Along the way a procession was going on, it looked Chinese and was somewhat similar to the Nine Emperor Gods festival procession (click here to see Sin's video on this procession). 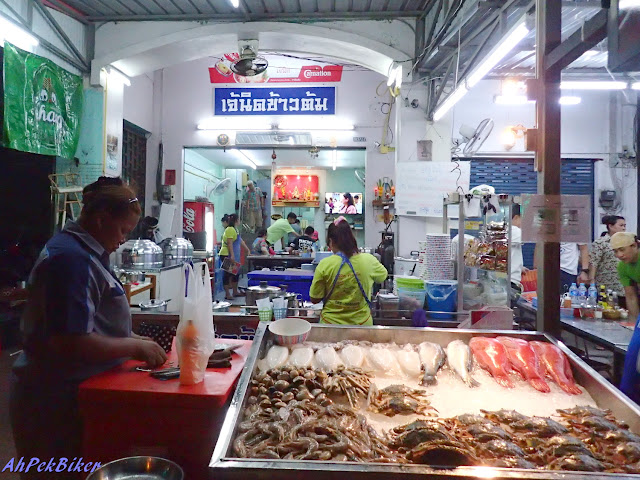 Found this shop (situated opposite the Royal Phuket City mall) which served a good range of seafood. 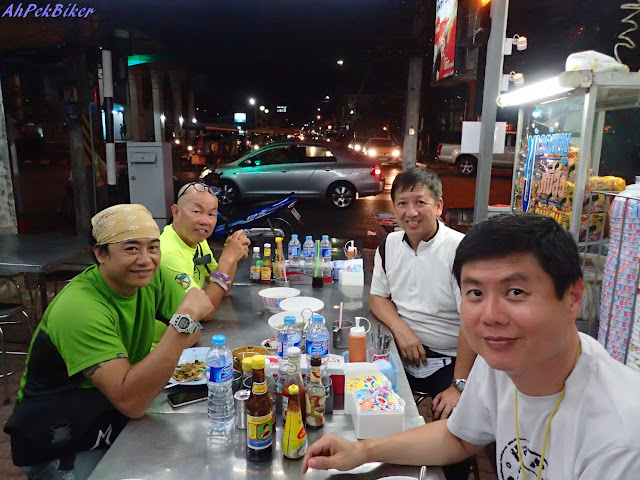 Unfortunately for me & Yong Sin (who looked well recovered now), we had to restrict our diet to porridge and could just look in envy at our other buddies food. 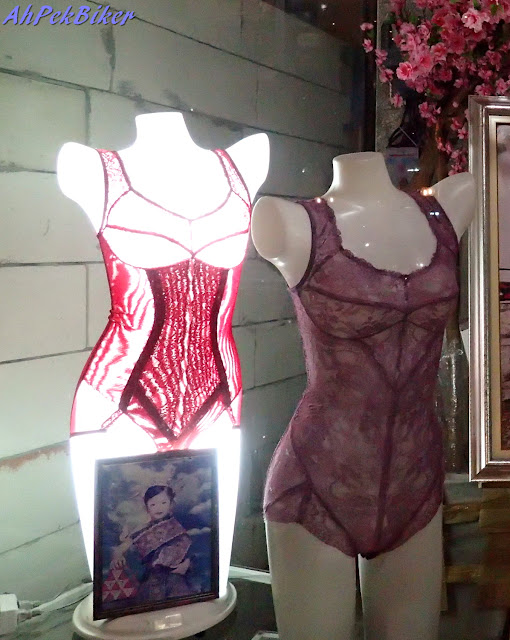 Phuket is renown for it's bright and lively night life.... for me though there were no glitzy lights, no go-go bars. The lights that came closest were just these mannequins. 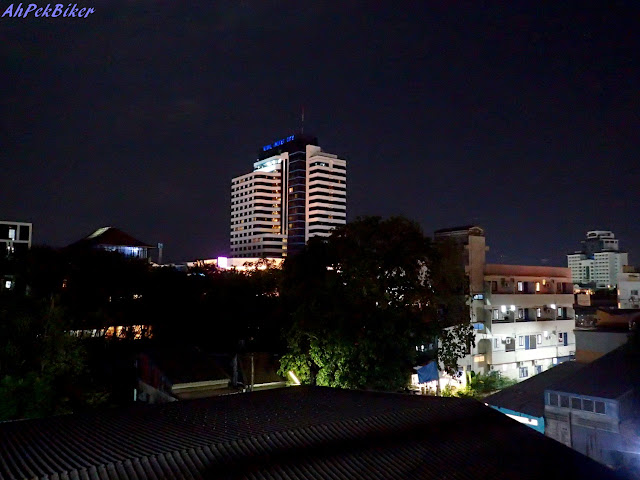 It's back to the hotel to dutifully take my meds and rest. And enjoy this view from my room.
One thing is for sure, the name Khlong Thom will forever etched in my memory

GOOD NIGHT, LET'S HOPE TOMORROW WILL BE A BETTER DAY.