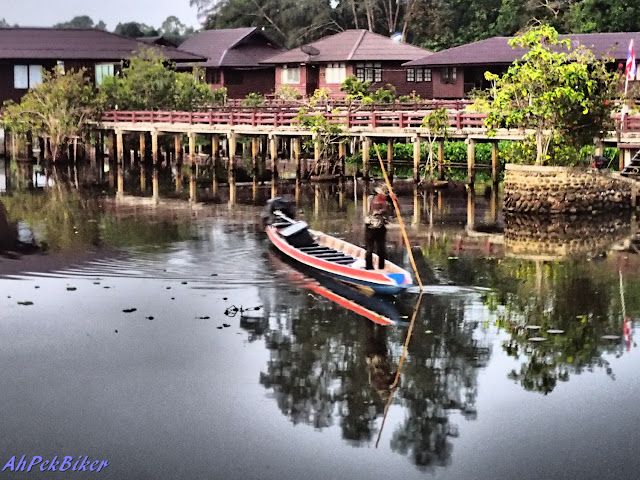 Route Recommendations :
1. The route is relatively flat with spots of shade here and there.
2. March to June is the hot season in Thailand, it does get extremely hot. With the El Nino effect this year's day temperature shot up to almost forty degrees. Most of the main roads are unshaded, so do cover up and rehydrate frequently.
We rode this stretch during the morning, it was a short ride and we were not much affected by the heat.
3. There are cycling lanes along the way from Thale Noi to Phatthalung, but do not be surprised if part of these are used to dry anchovies by the locals.
4. Places & Scenery
- Staying a night at Thale Noi is a must; this is so that one can go on an early sunrise boat ride to view the birds and other animals at the Thale Noi Waterfowl Reserve bird sanctuary. While on the boat ride, request the boatman to approach the Thanon Chaloem Phra Kiat 80 Phansa elevated highway to get a view of it from water level.
- Boats can be rented at the jetty (GPS: 7.77729, 100.12253) at 450 Bahts each. Don't worry it comes together with a boatman, do give him a handsome tip though.
- From the bridge at Pak Pra River (GPS: 7.72755, 100.14486) there are surrealistic view of the many Chinese fishing nets.
- The Saen Suk Lampam Beach (GPS: 7.62784, 100.15479) is a nice place to stop as it has a nice beach and nearby is a nice park too.
5. Food
- A good place for breakfast/lunch is at the coffee shop in Thale Noi that serves excellent noodles and chicken rice (GPS: 7.77662, 100.11772).
- At Phatthalung, good pork trotter rice is served at a shop (GPS: 7.61595, 100.08109) near our hotel.
- Pop Eye Grille (GPS: 7.61188, 100.07134) serves pretty good Thai style barbecue-steamboat dinner.
- The night market at Phatthalung (GPS: 7.77838, 100.12303), near the railway station, has a good range of food and other stuff.
6. Accommodations
We stayed the Grand PL Hotel (GPS: 7.61673, 100.08171), rates was at 500 Bahts per room per night. They do have a small storeroom at the ground floor for keeping bicycles. 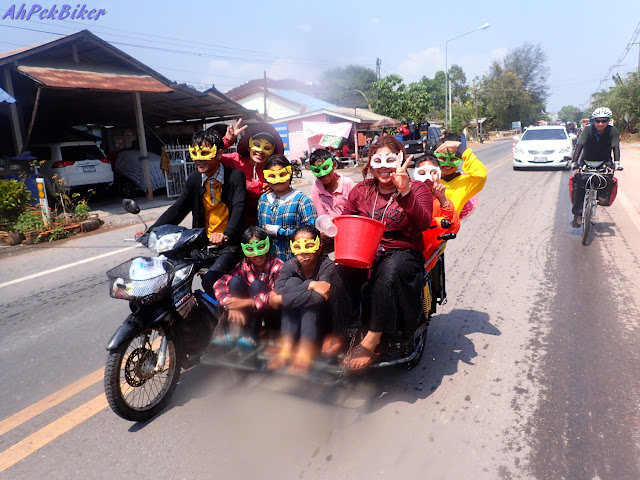 The previous day was a wild, wet and colourful one as we joined the locals in celebrating Songkran. We were fortunate to be able to find a hotel in Thale Noi so that today we could go on a wonderful bird-watching boat ride at the Thale Noi Waterfowl Reserve, it's one that should not be missed! 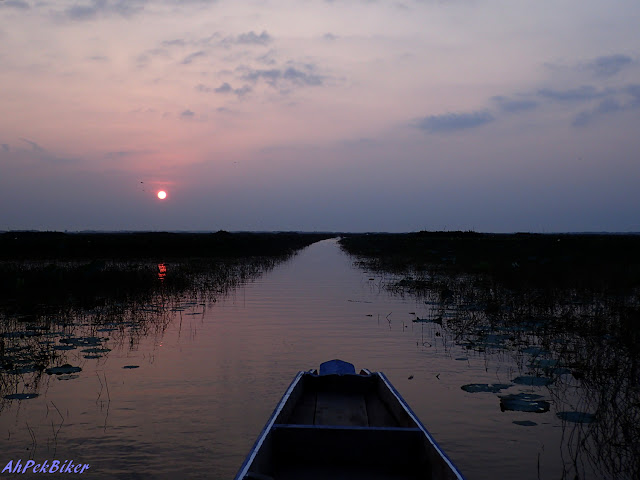 We were up early and by 6:00 am were on a boat heading out into Lake Thale Noi; and were hoping to catch views of the many birds here as the sun rises, it would be a beautiful sight. 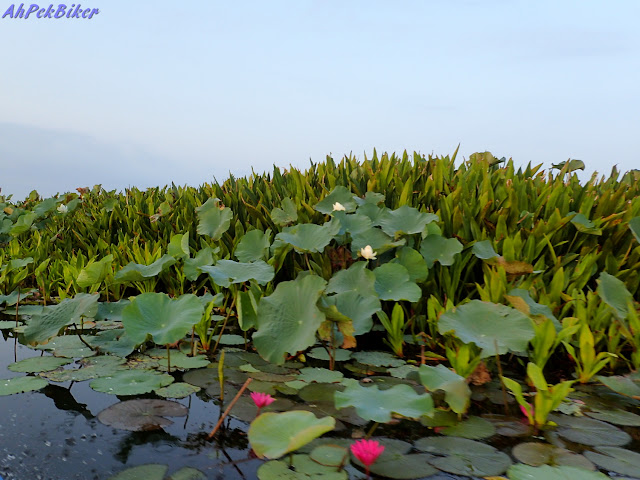 This portion of the lake is shallow and full of life, water lilies and lotus with their colourful blooms float on the surface and behind them tall reed plants shoot up. Their roots below water are ideal for fishes to breed and these fishes attract the birds. 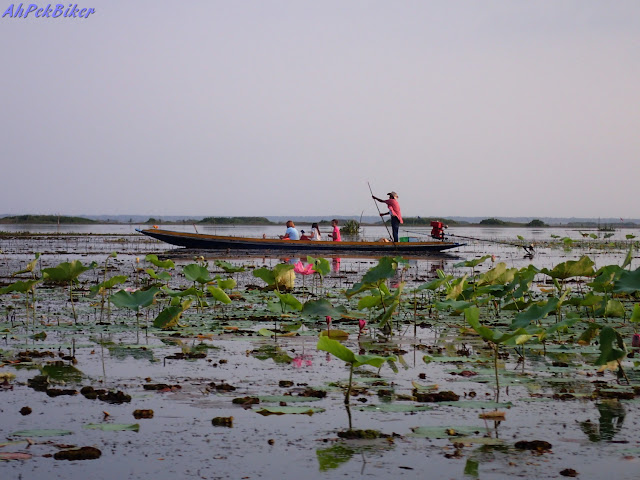 The boat putted along and then suddenly the boatman turns off the engine and starts rowing, we glided along stealthily not wanting to interrupt the quietness of the place. 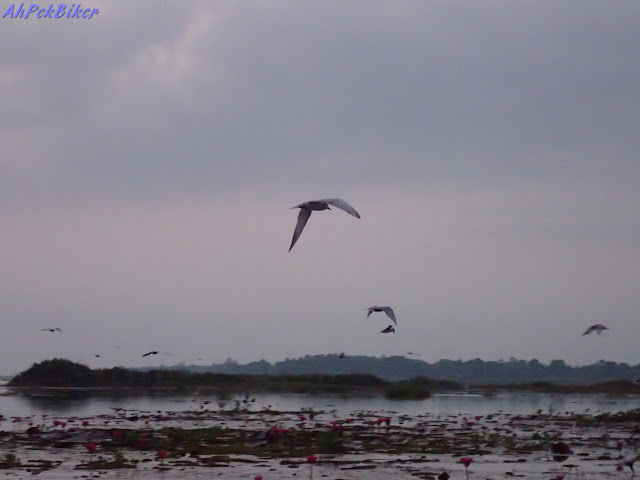 Then.... we see them.... birds flying in the air, skimming the surface of the lake and every once in a while dipping below the surface and coming up with a successful catch between their beaks. 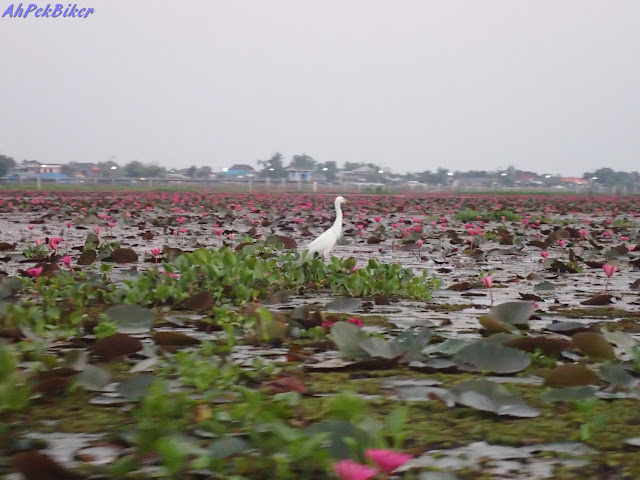 Next, a single white egret standing out conspicuously among the green and red... 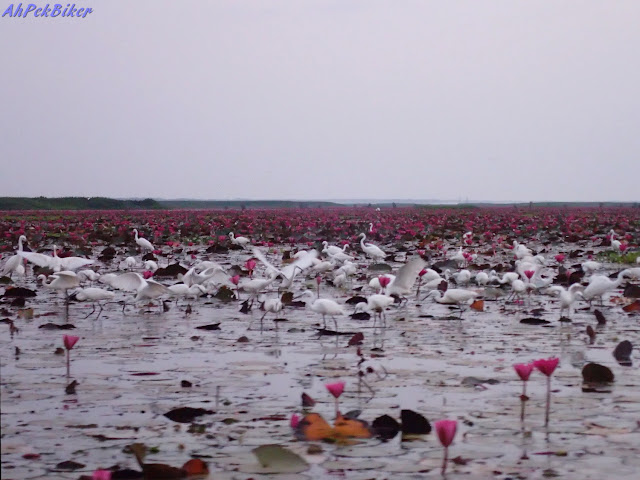 ... And then whole flocks of them, slowly walking in the shallow waters, nibbling into the water and feeding. Birds are all around us, wading in the water, soaring high above in the skies; the views are majestic, colourful and so alive! This is nature at one of its best. We headed further outwards, towards the Thanon Chaloem Phra Kiat 80 Phansa elevated highway, now looking different when viewed from bellow. It's tall piers silhouette against the sunrise, looking like the stilty legs of egrets and cranes. The total boat ride, up to the bridge and back, is about twenty kilometres. 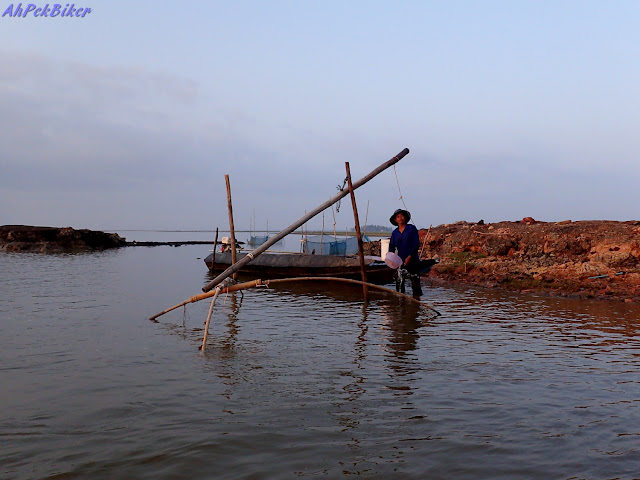 The bridge marks the end of Lake Thale Noi which is a protected reserve where no hunting and fishing is allowed. We rode along the Ban Klang Canal before turning back. The canal leads out to a large lake that goes further south to Songkhla Lake before exiting to the Gulf of Thailand.
Just after the bridge we saw fishermen with their nets out ready for a good catch (see above map). 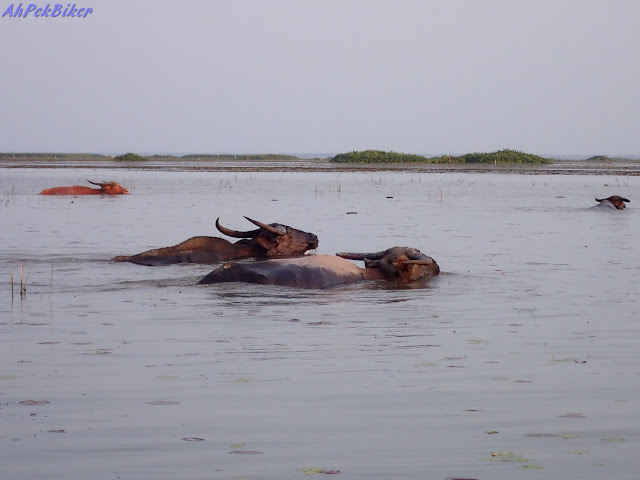 As we headed back, a family of water buffaloes calmly swam pass us, there's even an albino one that looked a bright dark pink in the rising sunlight. 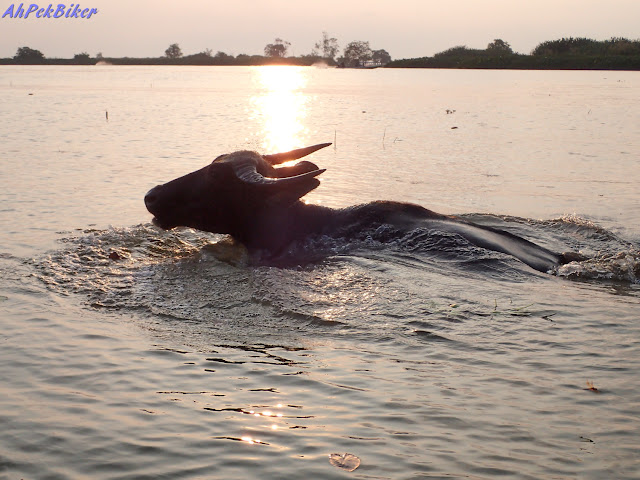 Against the sunrise, the buffaloes swam, their movements mightily swirling the calmness of the water. 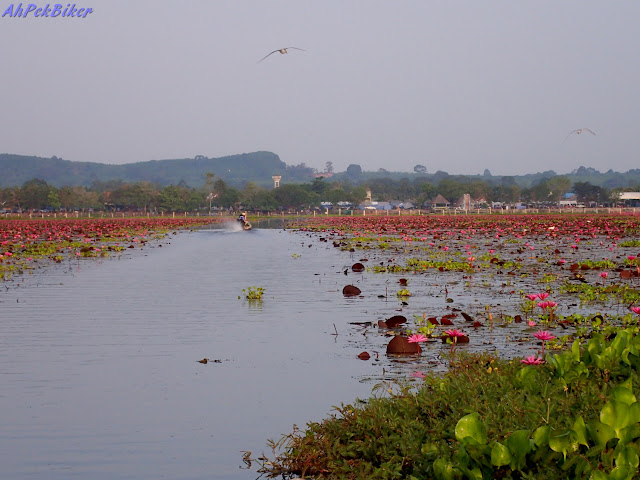 As we approached the jetty, a bird swooped passed us. Our eyesight followed it to a glorious sight - in the brighter morning the water lilies painted the lake a sea of pink. 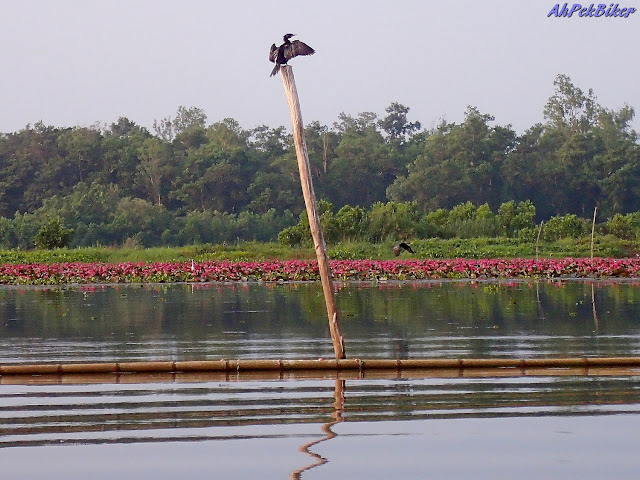 To another side, a cormorant went squawking while eyeing the waters below for a fish to catch.
(Click here to read more of Thale Noi Waterfowl Reserve) 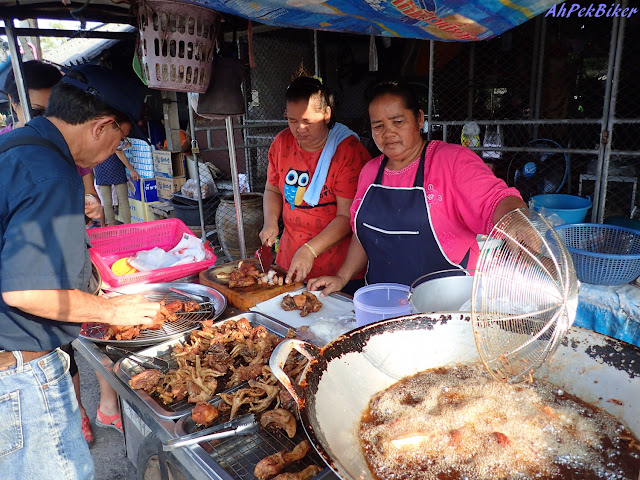 It was a two hour boat ride; the beauty of the place had made us forget about our stomachs. Now back on land, our hunger pangs called out ferociously and we went a food hunting.
Many stalls line the main street, one was this stall selling fried pork and chicken. It was a favourite among locals and the moment the fired meat were scooped out from the wok, they were snapped up. We waited our turn, got some pork and chicken and went to another stall to buy some local cakes before adjourning to a coffee-shop for some noodles breakfast with these. 9:30am - After a quick rest, we checked out from the motel and started our ride towards Phatthalung. It was an easy ride along the flat roads and the morning was not that hot. Along the way there were cycling lanes but at several stretches anchovies were laid out to dry in the sun. 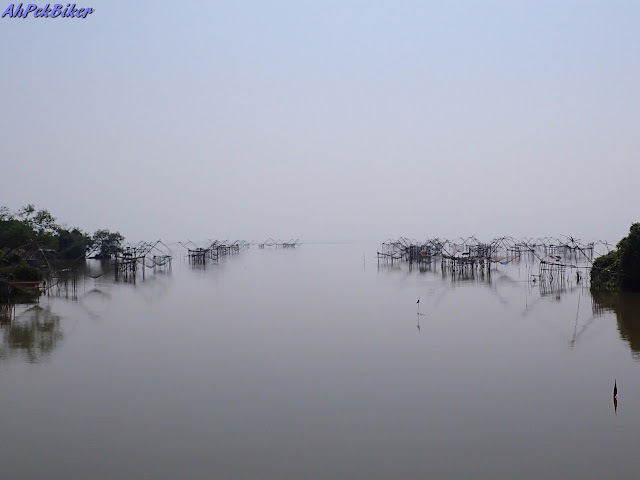 We were happily cycling along up the the bridge over the Pak Pra River (GPS: 7.72755, 100.14486) when Keat suddenly swerved around and stopped. I was wondering why and stopped to.
From the bridge was a surrealistic view; Chinese fishing nets sat on stilts over the water stretching out towards the horizon. Far away, the whitish sky blended smoothly with the lake's water. The scenery looked like it had jumped out from an old Chinese painting. 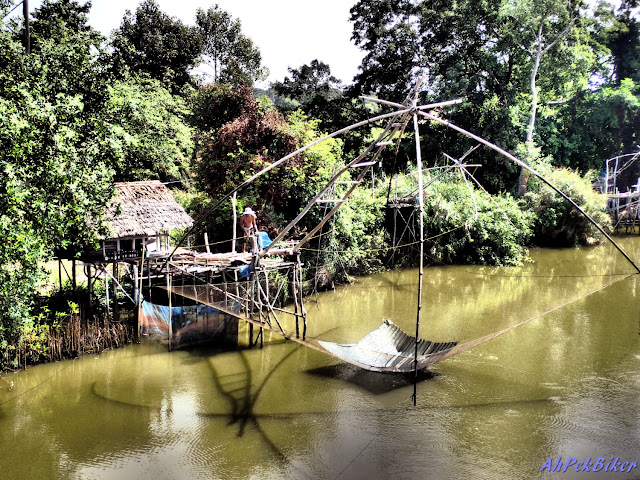 On the other side, a man was hauling in his net. It came up with his catch... just one paltry fish! The man shook his head and lowered the net again. 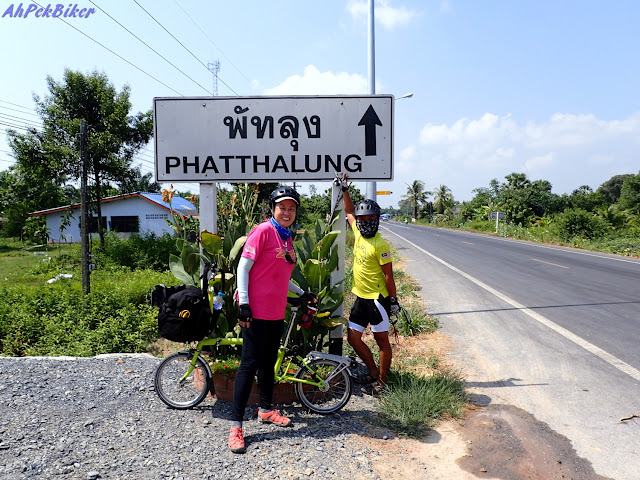 10:15am - A quick stop for some drinks and a sign shouts out Phatthalung ahead! 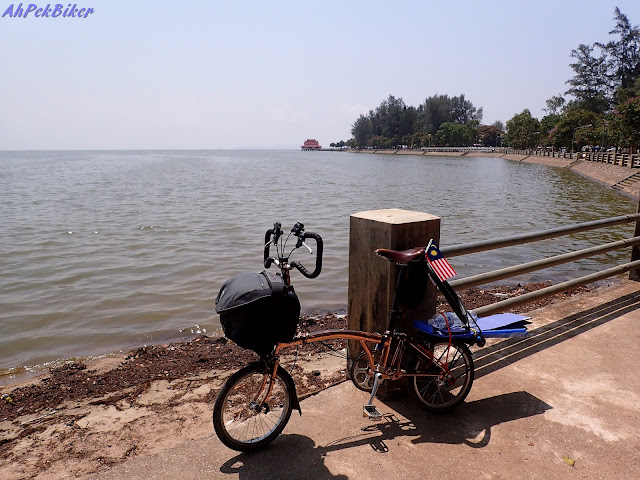 At Ban Lam Pam, we made a left detour and headed for Saen Suk Lampam Beach. It was high tide then and the beach could hardly be seen. 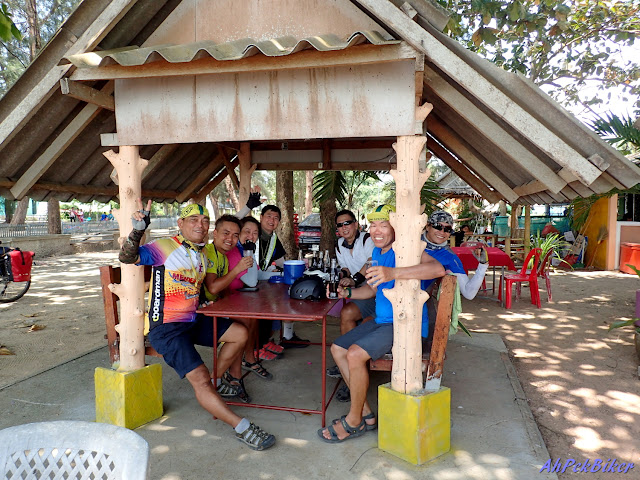 Sin was feeling a bit under the weather; so we stayed on here for more than hour drinking some beer as we took in the cooling sea breeze and the calmness of the place. 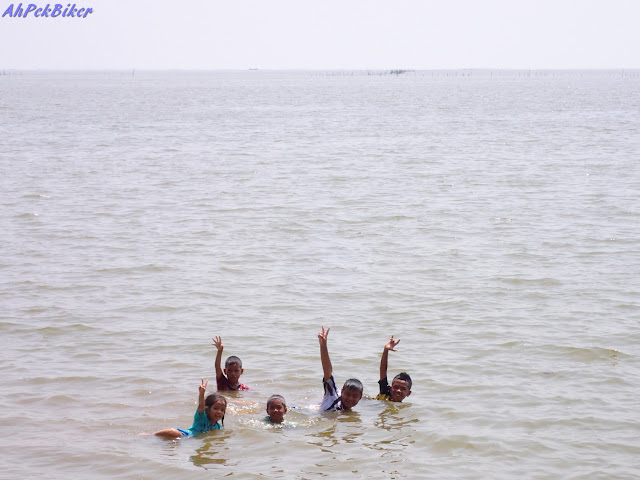 In the sea, children were happily swimming. Noticing me they waved merrily and shouted at me. 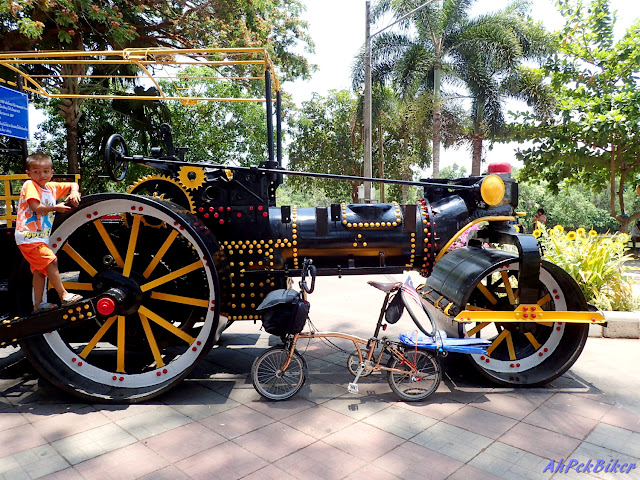 Nearby is a park with artifacts from Thailand's past like this Henschel steam-powered road roller. 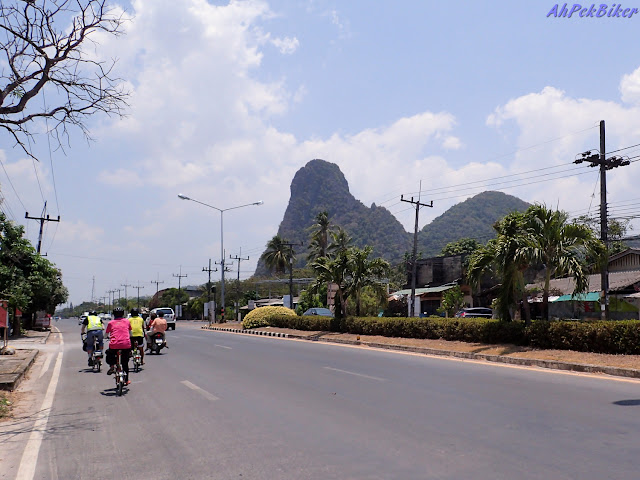 Well rested, we continued our journey, riding pass this odd looking hill. It's the Khao OK Thalu Mountain after which Phatthalung is named after. 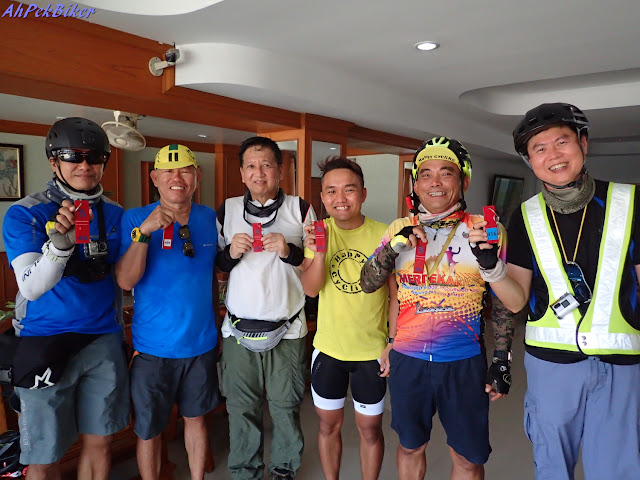 12:45pm - This is a funny photograph at our hotel, the Grand PL Hotel. No we were not numbered slaves up for sale OR masseurs waiting our turn. Those red tags are room keys with their numbers, the photo made it easier for us to note each other's room numbers. 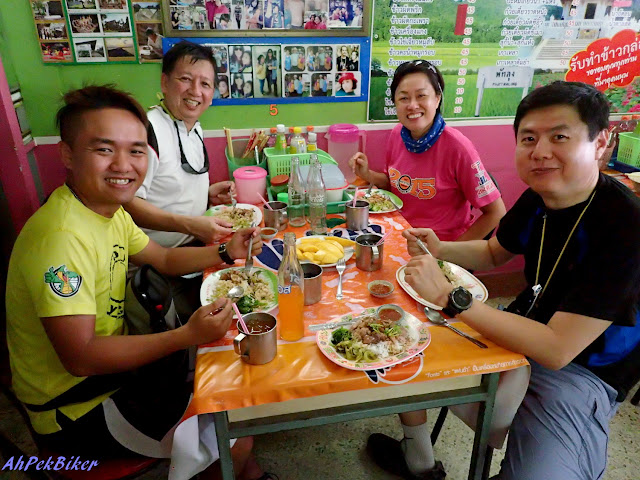 Lunch was stewed pig trotter's rice together with some fresh, sweet mangoes at a nearby shop (GPS: 7.615948, 100.081090).
With a free afternoon, we just relaxed and had a good Thai massage. A tip here, go for the older masseurs they give a stronger and better massage. 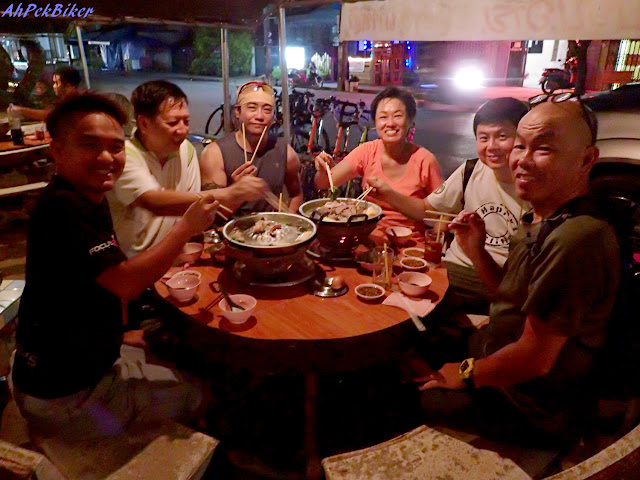 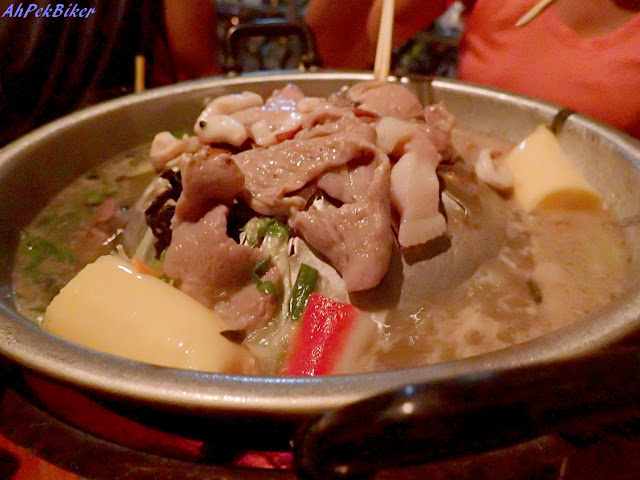 It had been a long but enjoyable day; one of a beautiful bird sanctuary, a bridge with a fantastic view, a nice beach, good massages and delicious food.
Good night!

Tomorrow we head for Trang, we planned to start earlier to avoid the heat. It should be an easy 60 km. ride, but then we were in for some surprises!