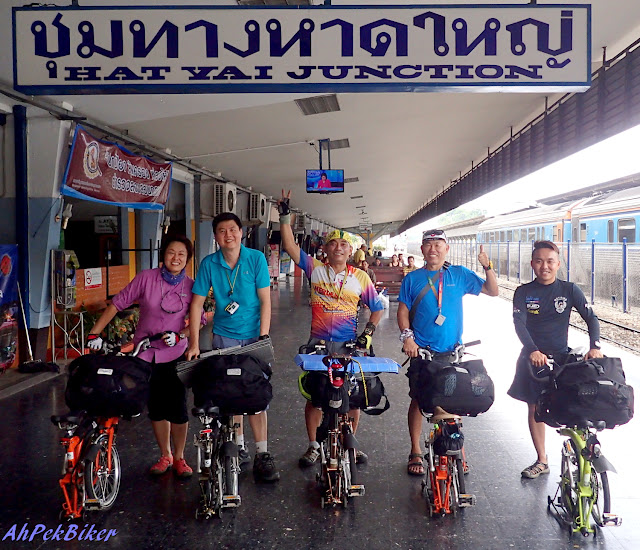 Route Recommendations :
1. The route is relatively flat. The main roads have wide shoulders suitable to cycle on.
2. March to June is the hot season in Thailand, it does get extremely hot. With the El Nino effect this year's day temperature shot up to almost forty degrees. Most of the main roads are unshaded, so do cover up and rehydrate frequently.
3. The main city roads in Hat Yai & Songkhla can get quite congested with heavy traffic, try to avoid them. There are some shared cycling lanes in both cities.
4. Places & Scenery
- we did pass by a couple of nice Thai temples but did not have time to stop and visit.
- the scenery along the route is cityscape and sub-urban.
- the Songkhla night market (GPS: 7.186342, 100.593359) is a good place to mingle and observe local life.
5. Food
- Ah Keat Boat Noodle shop (GPS: 7.00203, 100.47082) serves one awesome Thai noodles.
- There are many seafood shops in Songkhla, we ate at Restaurant 2528 (GPS: 7.195165, 100.593726).
- the night markets has a good range of street food including crunchy insect treats.
6. Accommodations
There are many motels in which to stay in at Songkhla, we stayed at TJ Motel located at Saiburi Soi 29 (GPS: 7.181592, 100.606018) at 450 Bahts per room per night. 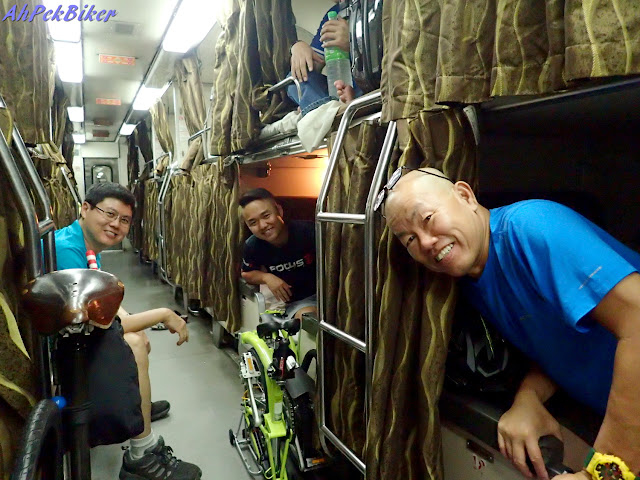 10:00pm of the 10th: The five of us (Andrew, Hui Min, Keat, Sin & me) met at KL Sentral Station a couple of hours before our early morning KTM sleeper train. Our destination -  Hat Yai in Thailand!
At that point of time, most of the shops were already getting ready to close, and there were really not much to eat. We ate some end-of-day stock of KFC just to fill our tummy knowing that food from the train cafeteria was nothing much to shout about.
The train arrived and we boarded searching for our sleeping berths (which we had booked a month earlier as these get sold out fast). We were fortunate that most of our berths were on the lower deck and we could comfortably park our Brompton bicycles just next to our bed (Locked to our beds of course! Don't want our darlings to be stolen while we were asleep, would we?)
As the train headed off, we chatted a bit, went to check out the cafetaria (nothing much there) then came back and retired to our individual berths. I always have difficulties sleeping on trains, but laid there on the bed and with the motion of the train rocking like a cradle, I was soon asleep. Woke up at around 5:00am and noticed that the train had stopped at Chemor; there was some problems with the locomotive and they had to change another one! This caused a delay of a precious two hours. Well, nothing much we can do about it so I just went back to sleep. 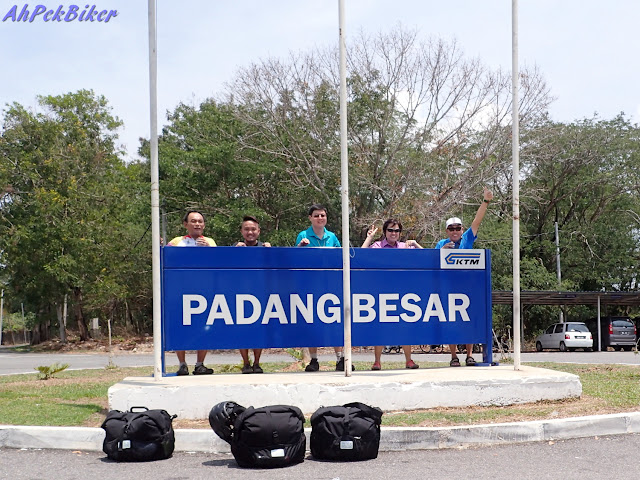 11:50am - We are at Padang Besar, the border town between Peninsular Malaysia and Thailand. Here we had to disembark to go through the immigrations checks of both countries. We took our luggage bags (Brompton C and T bags) down with us and were allowed to leave our bicycles on board. The train stops here for almost an hour, an most take the opportunity to stretch their legs... 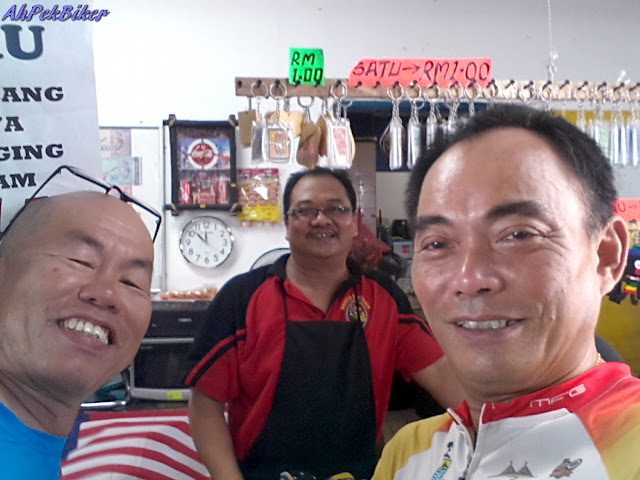 ... and have brunch at the cafeteria located at the first floor of the immigration complex. By coincidence, a mutual friend En. Mohd. Nasser was operating the cafeteria and we popped by to say hello. He can also help arrange for van services to take passengers from Padang Besar to Hat Yai (contact him on his mobiles: +6012-5326522 & +6012-4625787)
We took some nasi lemak and Malay rice which were relatively good and after a while re-boarded the train. 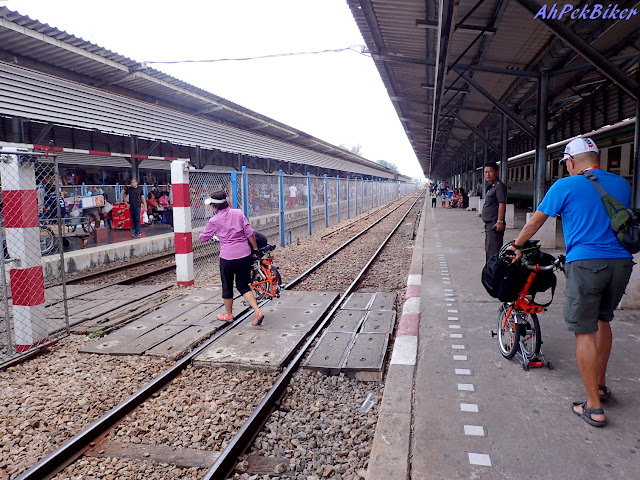 12:30pm (Thai time): The train arrived at Hat Yai station, two hours late. Our landing platform was a few tracks away from the station proper and we had to carry our bikes across several railway tracks. I was carrying mine when passengers on the other platform shouted at me to hurry.... there was a train arriving. Fortunately, it chugged slowly in and I was able to get out of it's way with ample time to spare.... Phew! 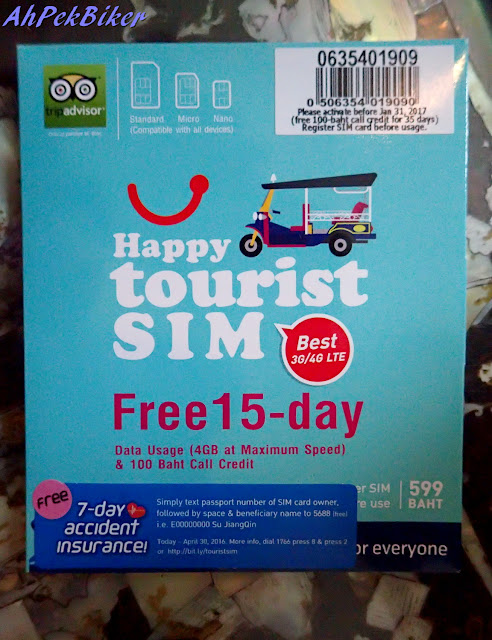 First thing first was to get local pre-paid sim cards for our mobile phones. Fortunately at the railway station sales people from the Happy mobile network were promoting theirs and we were able to get all our within an hour. Min & Keat (who will be with us part of the tour only) went for a 7-day package that costed 299 Baht while the rest of us went for a 1-month package that costed 599 Baht. This was suppose to include a 7-day accident insurance, but try as I may I was never able to send a successful sms to register (Pffffft!) 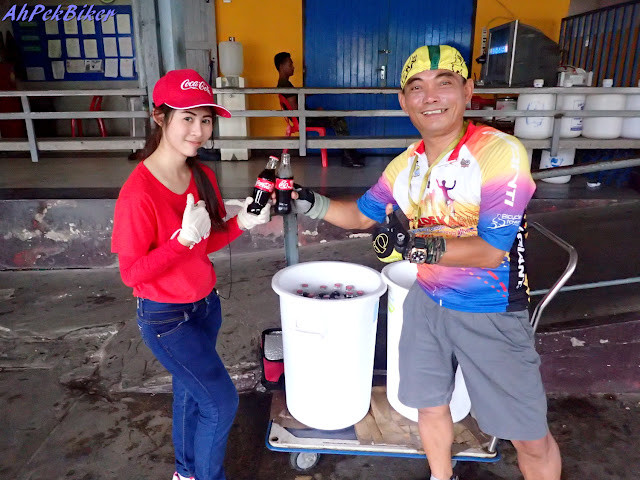 It was very hot when we arrived, and we were lucky - Coca Cola sent some angels to distribute iced cold drinks free to all arriving at the station... I gulped down three. No, it was not because the promoters were pretty... I was really thirsty!

Ride Route - Hat Yai>Songkhla.
The route take us out from Hat Yai onto the relatively flat Highway #407 towards Songkhla. En route we stopped for lunch, another stop for drinks and also popped into a bicycle shop. 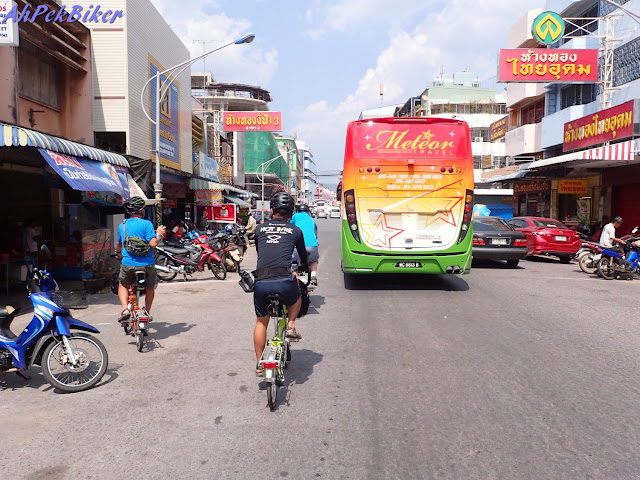 Yahooooooo! Yipeeeeeee!
We are riding on Hat Yai's roads! You must excuse my exuberance, this is the first time I am cycling in Thailand.... hot as it may, I was filled with excitement.
Yeeeee Yah..... Ariba ariba! 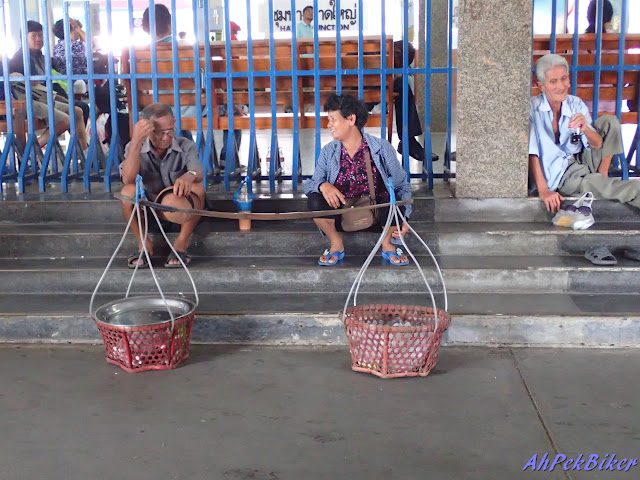 And I took in my initial views as I cycled along, like these pedlar resting in the shade of the railway station... 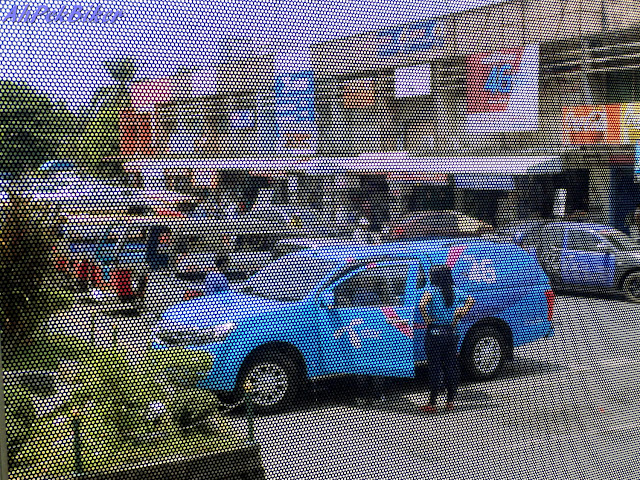 ... a psychedelic view of trucks seen through a mesh window... 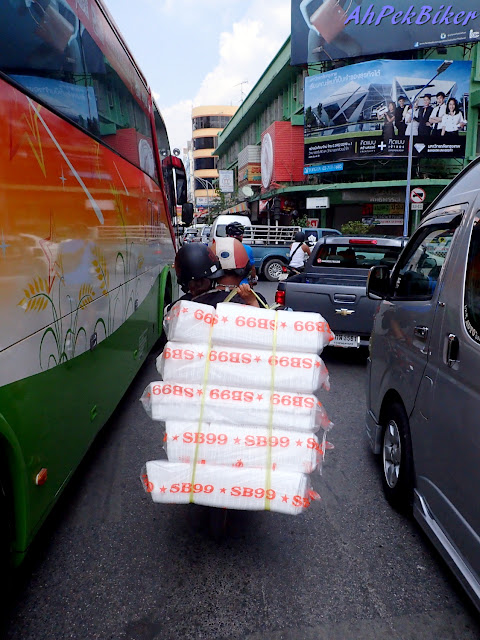 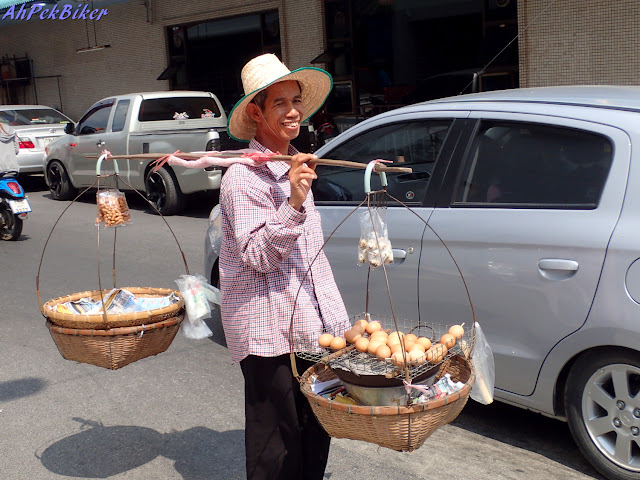 ... another pedlar happily carrying his wares, smiling widely despite the heat.
Yes, Thailand is indeed the Land of Smiles, it's gentle people always seemingly happy. 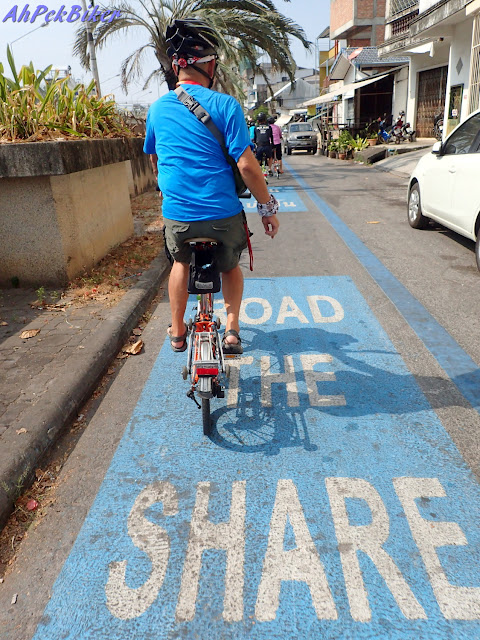 As we rode on, we noticed cycling lanes, shared lanes on many of the roads, side-lanes and alleys of Hat Yai. We were to notice similar lanes in many of the towns we visited later, Thailand seems to be more cycling-friendly than Malaysia. 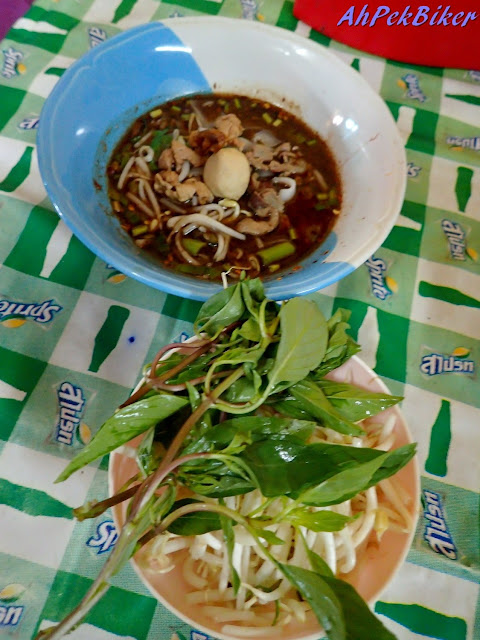 With just a quick stint (about 600m from the station) we were Ah Keat's shop that sells on of the best boat noodles in Hat Yai. Normally, these are sold from boats plying the river and because of that they are sold in small bowls. Ah Keat's however have these small bowls, and also medium and large sized ones too. The noodles typically comes with a small bowl of bean sprouts and "kensom leaves" (Vietnamese mint leaves). Min went for the medium-sized one which is shown above, while us guys went for the large ones (seen below). 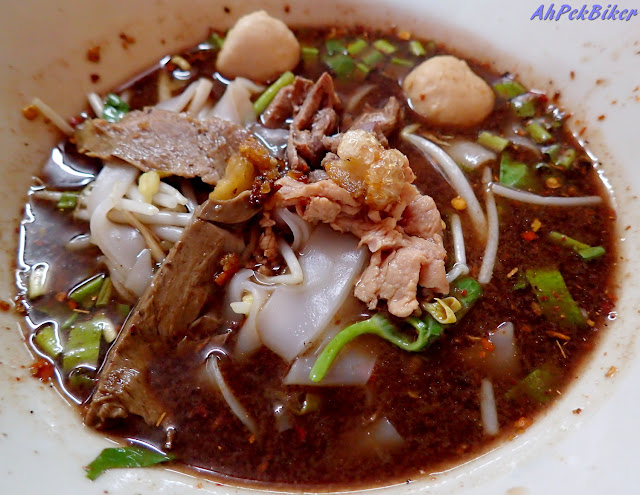 Keat's noodles came with keow teow (flat rice noodles) immersed in a slightly sticky, spicy gravy. Ingredients includes slices of pork, pork liver, fish balls. I like their keow teow which was very smooth had a slightly bouncy bite. The gravy was not very spicy (although one can add chilli to suit). Overall it was very good, one of the best that I have tasted and I would recommend not to miss this if in Hat Yai. 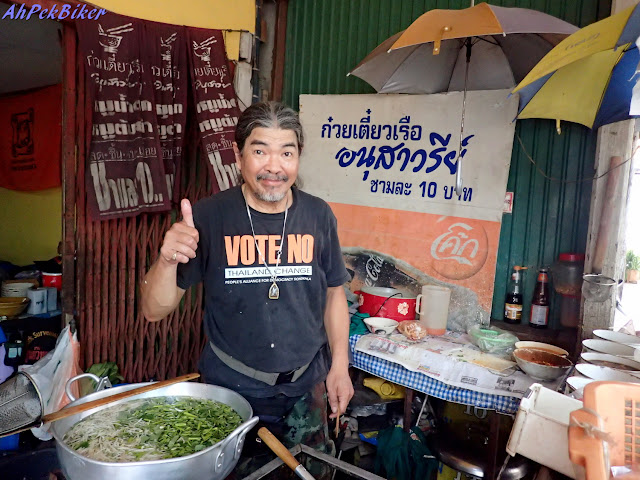 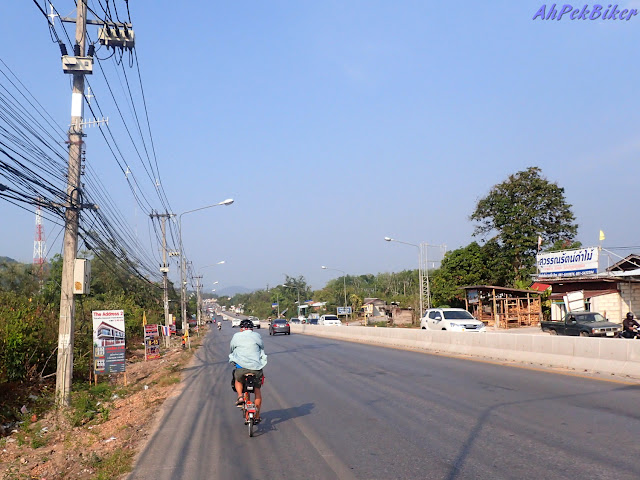 Due to the delayed train, we were running late and the afternoon was beginning to get hot. So we had to abandon plans to explore Hat Yai and started riding for Songkhla. The roads had wide emergency lanes for us to cycle on but were almost devoid of any shade. Here's Sin putting a long-sleeved thin shirt to cover up from the sun. 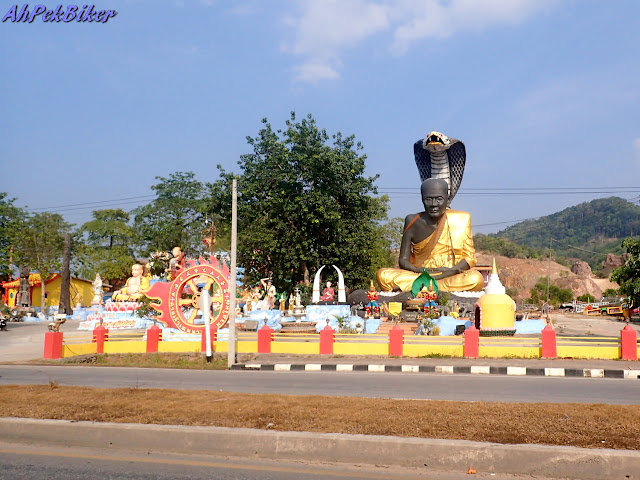 We passed several small towns and also this interesting temple with a large statue of a monk sitting legs folded with a large cobra behind him.
Along the way, we popped into the JP Bike shop just to see whether there was any accessories worthwhile grabbing (GPS: 7.033420, 100.502069) 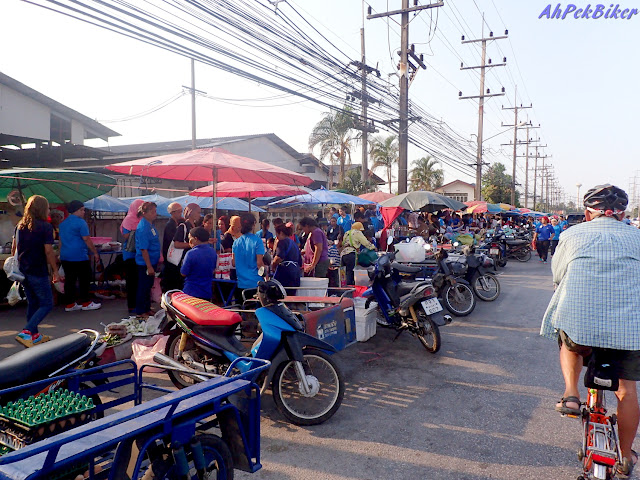 As we approached Songkhla, evening was setting in and the evening markets were already doing brisk business. 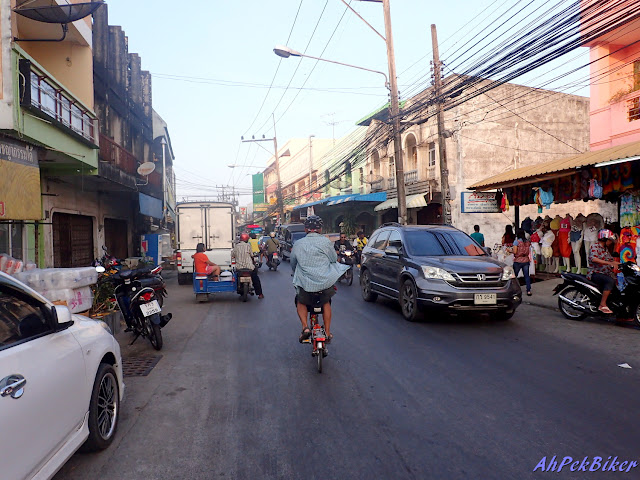 We did not go into Songkhla's main town centre but instead rode to one of the suburbs where we will be staying. Eventhough it's the suburbs, traffic was rather heavy here. 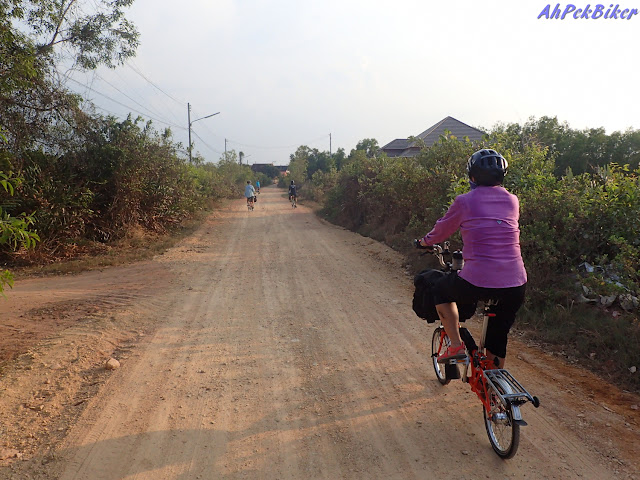 But soon, Andrew's GPS unit led us off the main road and onto quieter roads and even onto laterite roads. That's what GPS units will do, it will try to avoid main busy roads as far as possible, and that's a good thing too as we can ride safer then. 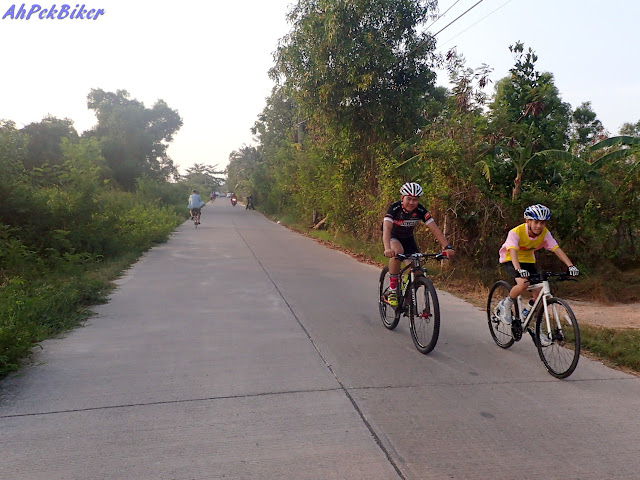 Evening was beginning to set in and the roads were filled with local cyclists who rang their bells and waved at us shouting "Khap!" (short for Sawasdee-khap). And we shouted back with our best smiles. 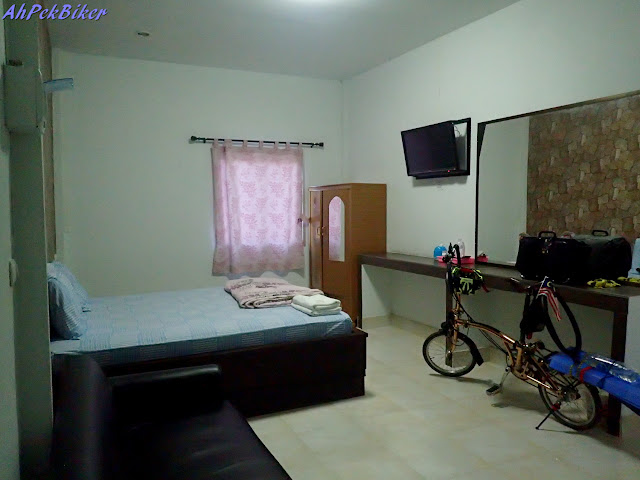 6:00pm - We reached our stay for the night, the TJ Motel. This is my room, these motels in Thailand are relatively cheap with TJ's costing 450 Bahts per night per room. The rooms are fairly large and most are single-storey (we could easily push our bicycles in!) . 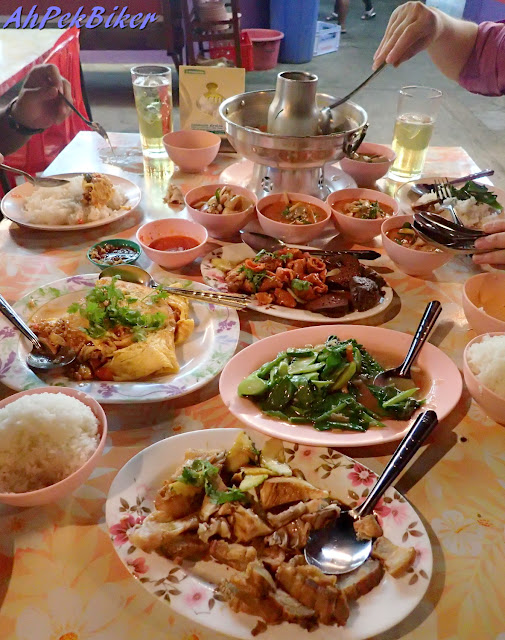 After a quick freshening up, we were off again, heading for Ramvithi Road where there are rows and rows of food shops. We had our first proper taste of Thai food at Restaurant 2528, a dinner which included their renown tomyam (very good), Thai omelet (okay), mixed platter of roast chicken and roast pork (below average), etc.
(GPS for Restaurant 2528: 7.195165, 100.593726) 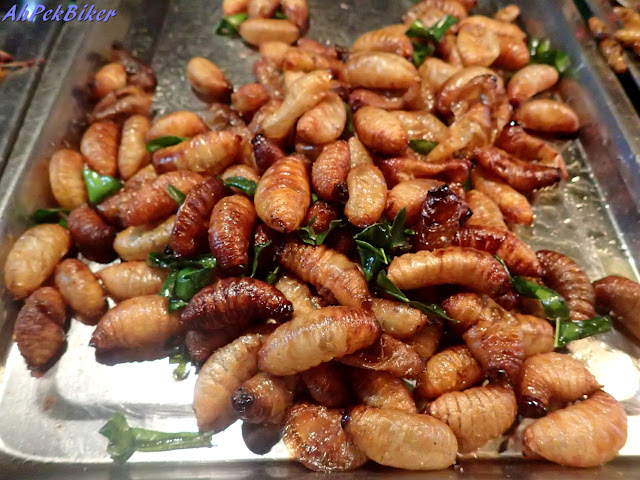 But we were not done for the day yet, and cycled over to a nearby market to walk-off our meal. These night markets are a good place to observe local life with stalls selling all sorts of stuff including this deep-fried silkworm, to the Thais a crunchy treats but to the uninitiated (like yours truly)..... Ughs.... 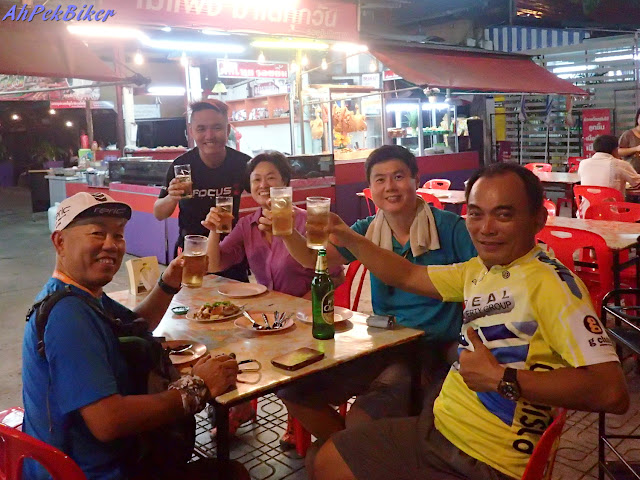 Cheers!
And Good Night.... we have another exciting day tomorrow as we head for Ranot!