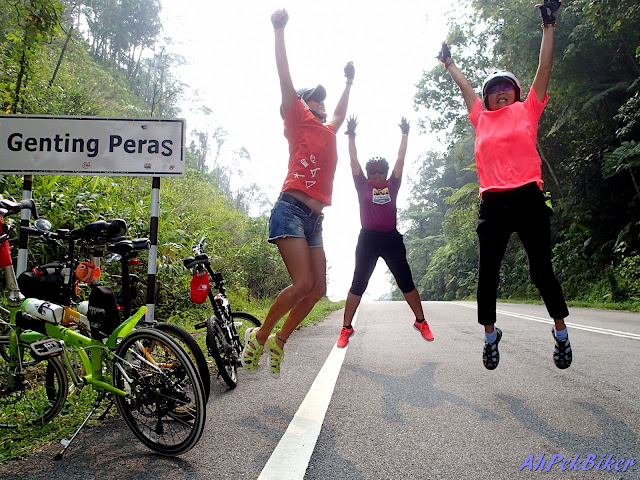 Route Recommendations :
1. This is a hilly route with some nice hill sceneries along the way.
2. Most of the route is not shady, so do cover up OR start early.
3. This a favourite route for many cyclists, who come regularly as the route provides a good work out. Some even start from Kuala Lumpur, and some go onwards to Titi.
4. As many come here to cycle, parking could be a bit of a problem. We parked at Bahalu Classic which is about one kilometre from Batu 18 town. Other then ample car-parking, it has good eats too; especially their bahalu (mini egg sponge cake).
5. Other good places to park is near the Batu 18 Ulu Langat Police Station (GPS: 3.163852, 101.847328) and Chung Hwa Chinese School (i.e. on Sundays when school is off / GPS: 3.164033, 101.847771). See map above for locations.

My cycling has taken me far and wide. I have done many tours out of town and a few out of the country. But what is odd is that a few local routes seems to elude me, they are close by but somehow through the years I have not been able to ride there. Two notable route that I have missed out is Genting Peras and Frasers Hill. There were many opportunities to ride as these places, but perhaps it's fate that I had not been able to cycle there yet. Sometimes the events just clashed with other things, and a couple of times I woke up late.... "grins sheepishly*
The closest I have been to Ulu Langat (in cycling terms) was during a ride to eat Yong Tau Foo where we made a stop at Ulu Langat town and then turned back to Kuala Lumpur. So when the chance to go riding to Genting Peras (many call it Peras for short or Genting Perez) cropped up, I just jumped at it. It was not going to be a long ride, just about forty kilometres but it will do just fine to work up a sweat in the morning without getting sun-burnt.
So here we go!

Ride route - Pekan Batu 18 Ulu Langat>Simpang Peras>Genting Peras & Back
The ride route is quite straight forward, one that start from Pekan Batu 18 Ulu Langat and just pedal on to Simpang Peras and make a left turn to Genting Peras. One can take a right turn to go to Sungai Tekala;forest reserve AND a more interesting (meaning tougher) cycling route to Bukit Hantu. OR some make their ride more challenging and continue on to Titi, which is about 35km from Simpang Peras. For details on distances and destinations click on the top left-hand box of the map above.

The  section slopes gently from Pekan Batu 18 Ulu Langat to Simpang Peras, but be prepared for much steeper slopes after that until Genting Peras (see elevation section above). 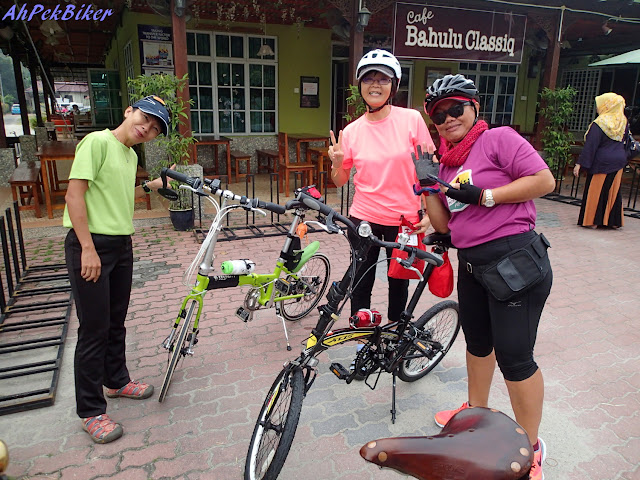 By Ulu Langat cycling standards, we arrive late. We dropped by at the flats behind the police station to have so roti canai breakfast before driving over to Bahalu Classiq where we parked, unloaded our bikes and we ready to roll off. 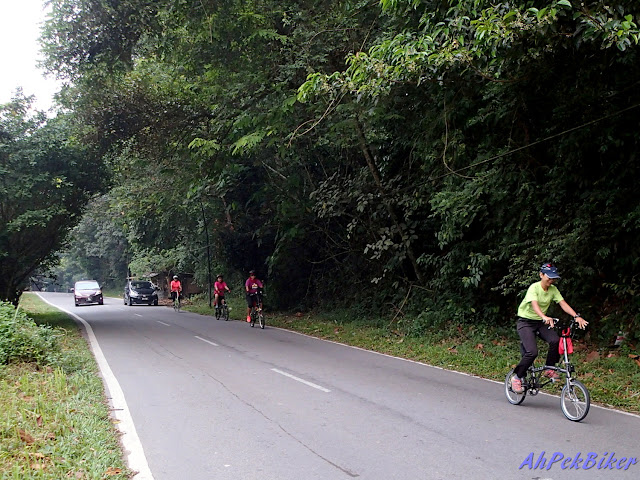 8:30am - We rode off along Jalan Sungai Lui, this initial part ot the stretch that runs for about 11 kilometres up to Simpang Peras was nice to cycle along; shady and with a gentle slope it was a good warm up. Surprisingly, this area is lightly inhabited, we did pass by some small kampungs on and off but for the most part it was secondary jungle on both sides of the road. Passed by this large sign with a fish, there must be some fishing grounds nearby. 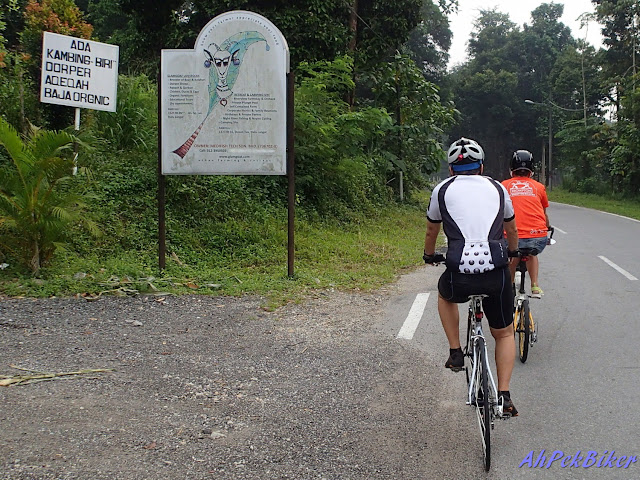 And further along, a goat farm with a unique name of Glamgoat that seems to be breeding breeds from overseas such as Dorpers. They also provide sheep/goats for the Aqiqah ceremony and the Quarban sacrifice. Other than goats, the place also rears chicken and duck, and sells eggs and fertilisers too (which were probably a by-product from the animals). They also run educational tours, corporate functions, and a homestay. For those interested, their address is No.1524, 20th Mile Jalan Sungai Liu, Hulu Langat, Selangor and telephone contact is +6012-3950503 (Ris). 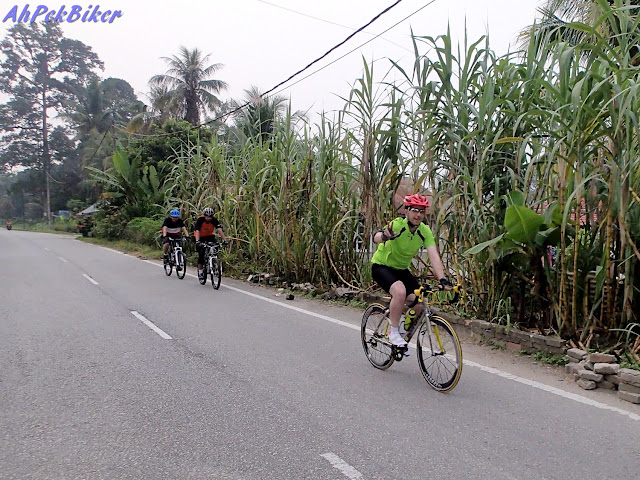 Because of the light traffic and the sweating out that it provides, this route is a favourite with many cyclists. On our way up we say many others, most were already on their journey back... Well, I did mentioned that we started out late. 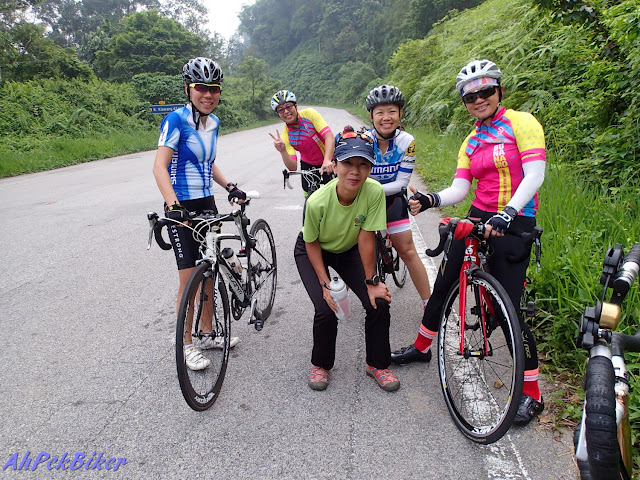 With many cycling here, it was inadvertent that we run into some familiar faces like Jun (seen here with some friends). She's now more into road bikes, no wonder I seldom bump into her during our regular rides. 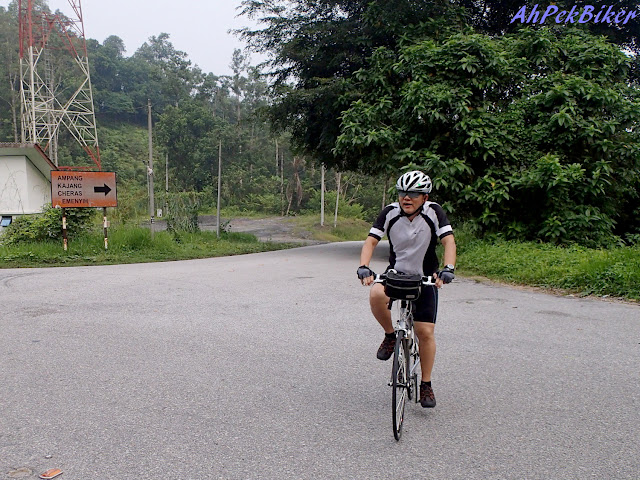 10:10am - We reached Simpang Peras junction. JK here catching a quick breather before we continue on. 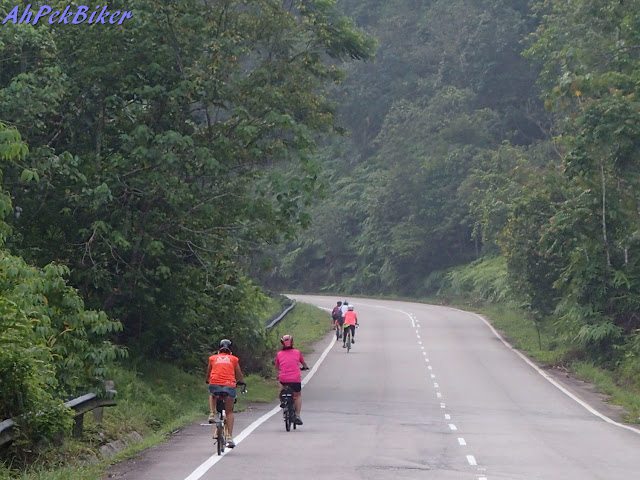 He was right to catch that quick rest for the road in front got steeper with more bends, some of which were quite sharp. 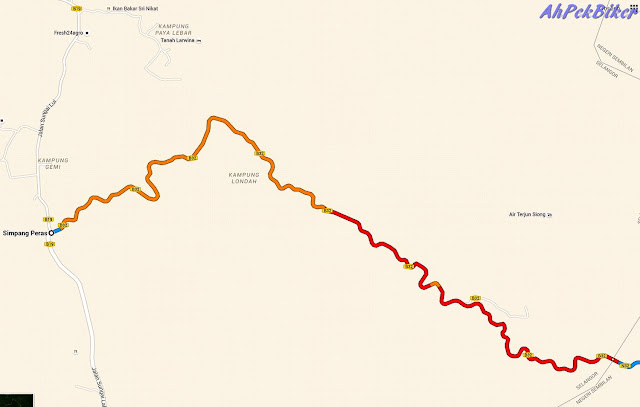 In fact it was to get much steeper as the above driving route map from Google shows, starting with orange (indicating steep slopes) at Simpang Peras it turns into a nasty red (meaning very steep) until it hits Peras. 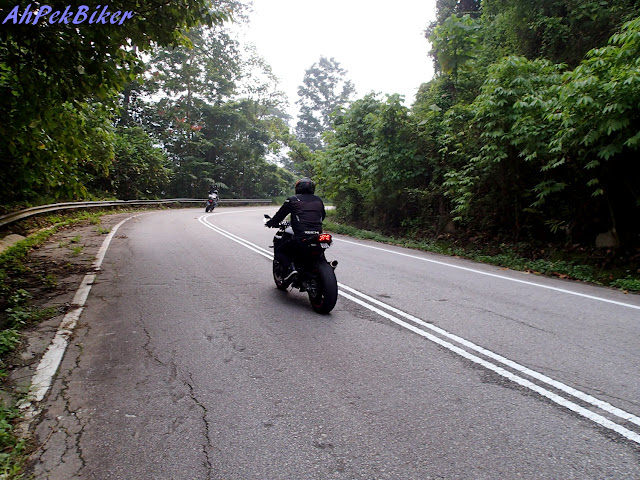 Because of it's steep climb and many sharp bends, this place is also a favourite playground for super-bikers. 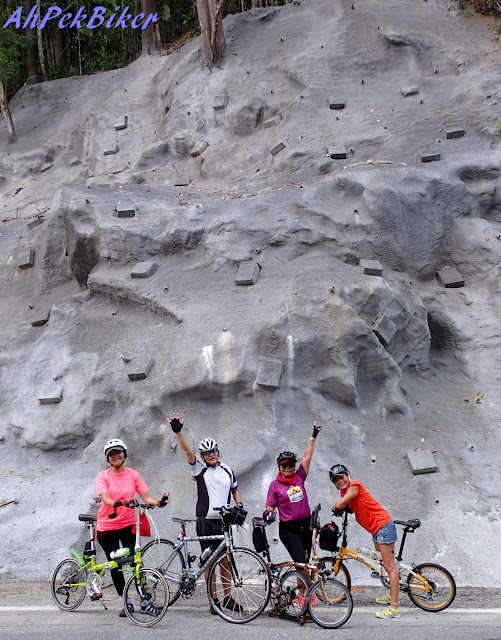 Somewhere along the route is this gunited slope, it's light grey cement colour making it seemed like were were somewhere in a cold temperate land. 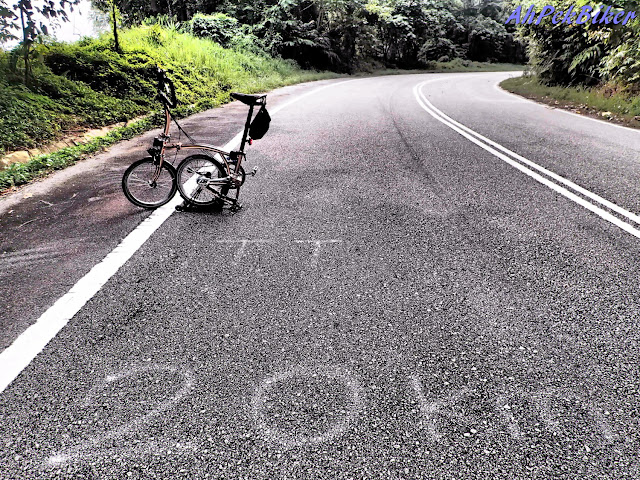 Slightly ahead a sign on the road says 20 km. to Titi; I don't think that's the correct distance as from Peras to Titi the distance is already about 24km. Perhaps someone posted this as an "incentive" for riders to continue on to Titi! 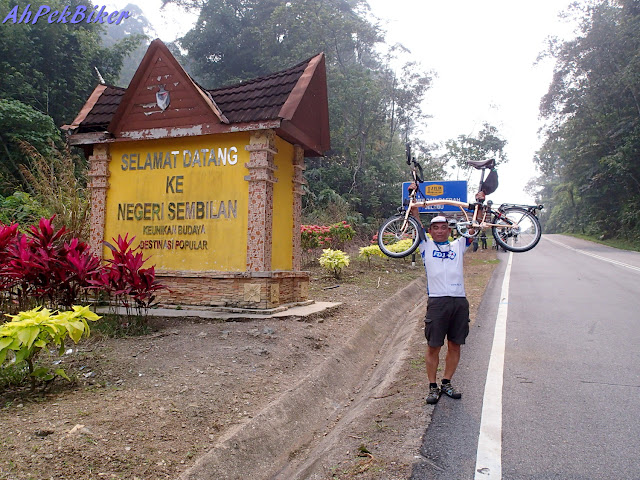 We hit the Selangor-Negeri Sembilan state border; Genting Peras is just within Negeri Sembilan, about a couple of hundred meters from this border marker. 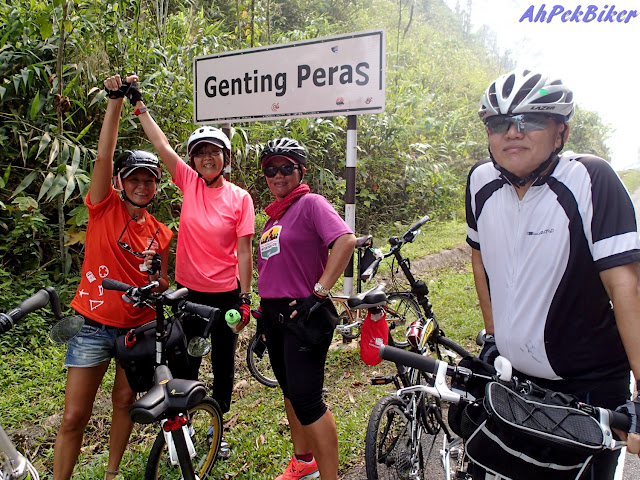 10:20am - Woooooohooooooo! We reached Genting Peras! Well done everyone. 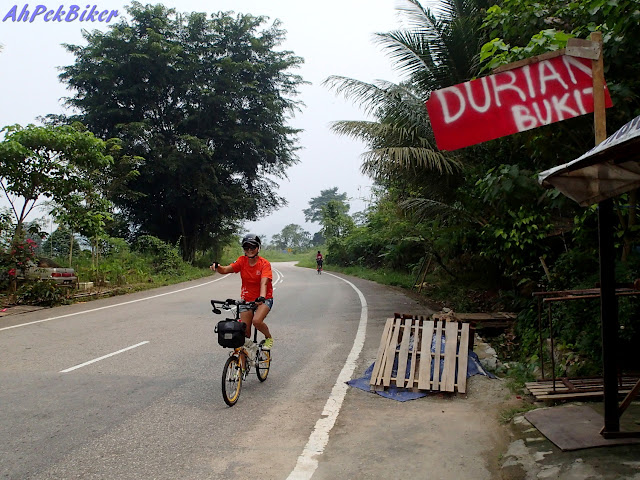 Satisfied with our achievement we rolled down the slope to Simpang Peras. If going up was a task, coming down was a breeze. Passed by this stall that sells "Durian Bukit"; I wonder how these durians from the hills taste like, are they better than the lowland durians. Anyway, I don't eat durians and will have to leave it to my friends to judge. 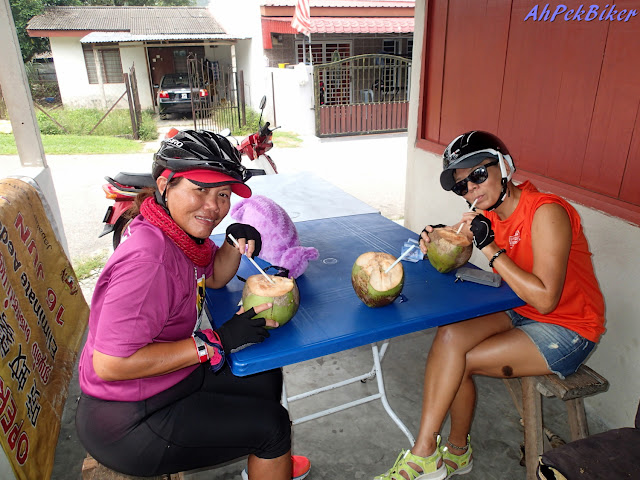 Back along Jalan Sungai Lui, a quick stop at one of the few road side stalls for some refreshing coconut water. 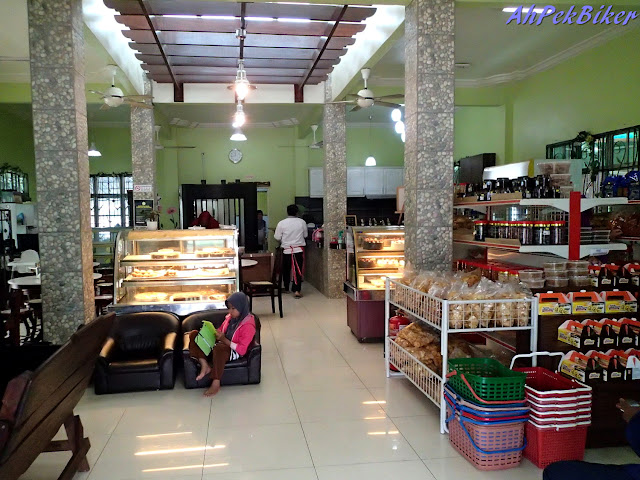 11:40am - We are back at Bahalu Classiq, this place is really bicycle friendly with bicycle racks in front of their shops. We popped in to have a look at the place and to buy some of the bahalu too.

You are at - Jotaro's Blog / AhPek Biker / Cycling Malaysia / Selangor / Ulu Langat to Genting Peras Cycling
If you like this, view my other blogs at Jotaro's Blog
(comments most welcomed below. if you like this pls share via facebook or twitter)
Posted by Jotaro Zen at 10:10 PM