Route Recommendations :
1. Scenic Marina Bay is always a pleasure to cycle on, it's good to take your time there and pedal at a casual pace.
2. For those interested in taking on slopes, Mt. Faber is the place to go to in Singapore. But do watch out for cars as the roads there are narrow. A tip here: do visit the toilets at Faber Peak, you will see why later.
3. If cycling on busy main roads with fast traffic, do be careful. It's better to cross these roads at the pedestrian crossings.
4. Cycling along the Singapore River can also be interesting, at night the place become quite vibrant.
5. The Buddha Tooth Relic Temple may not be one of the most beautiful temple, but it does hold Buddha's tooth. 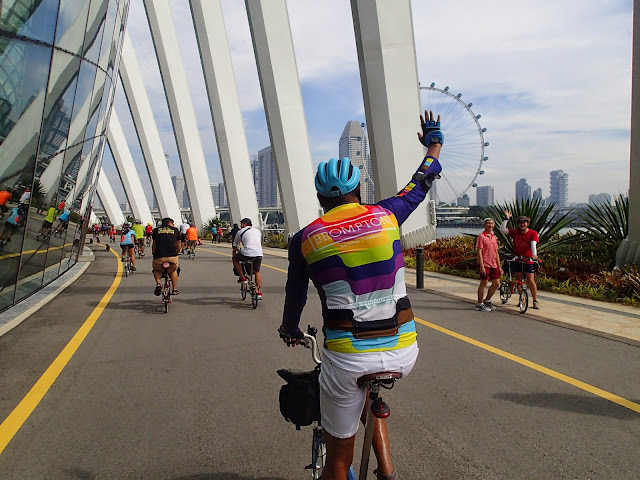 In the morning we had attended the 3rd Annual Singapore Brompton Day held at Gardens @ The Bay East. It was a fun event where Brompton owners got to get to know each other, trade tips on the bike and it's accessories, and also trade cycling tales. Finished with the event, some of us Malaysians led by a couple of Singaporeans friends thought that since we are in the Lion City, why not go cycle and explore somemore. It was some exploration as by the time we finished it was late in the evening.


Ride Route - Gardens By The Bay East>Maxwell Food Centre>Buddha Tooth Relic Temple>Mt. Faber>The Beacon>Red House>Five Stones Hostel
The route took us to lunch at a nearby food court and then upwards to Mt. Faber and down to the Singapore River. We had a few long stops for lunch, beery tea and dinner. 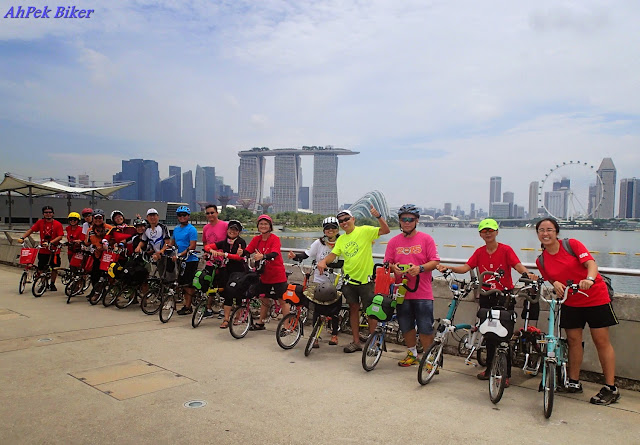 12:45pm - After a jovial gathering, we left the rest of our bikers friends and a few of us led by LK rode off to explore Singapore somemore. A quick group photo at the Marina Barrage, it had to be quick one as our tummies were calling out... almost shouting out, in fact! 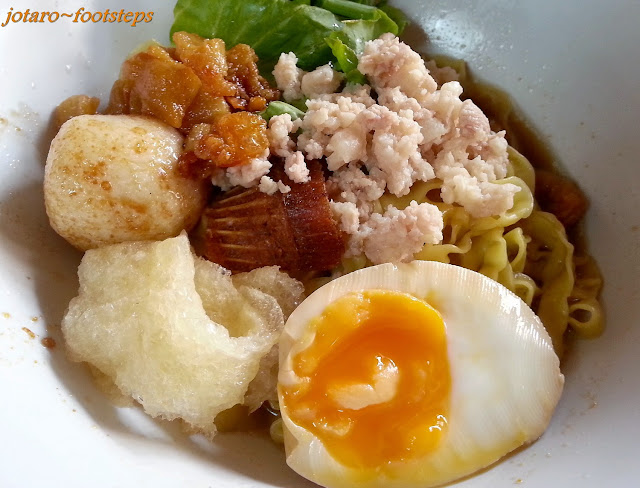 We cycled over to the nearby Maxwell Food Centre (the one renown for the chicken rice patronized by Anthony Bodain). A couple of us queued up to get the chicken rice but most of us could not afford the wait; we had many other interesting things to do and good as the chicken rice may be, we had to schedule our time for later things.
So a few of us opted for Guan's Mee Pok; I had the basic version at S$3-50 it may not be cheap by Malaysian standards, but by Singapore standards it was very affordable. It was good and came with Japanese Tamago eggs. 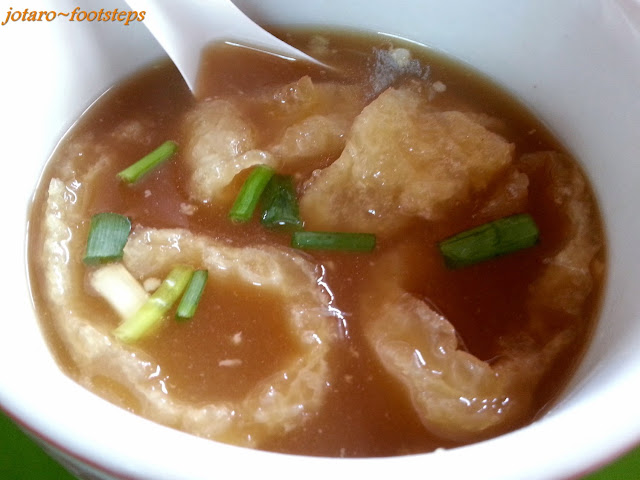 But this Fish Maw Soup at S$5-00 was definitely cheap by any standards. It was a very worthwhile treat, with dried scallops making the soup sweet, and the maw soaking up that tastiness like sponges. An A+ for this. 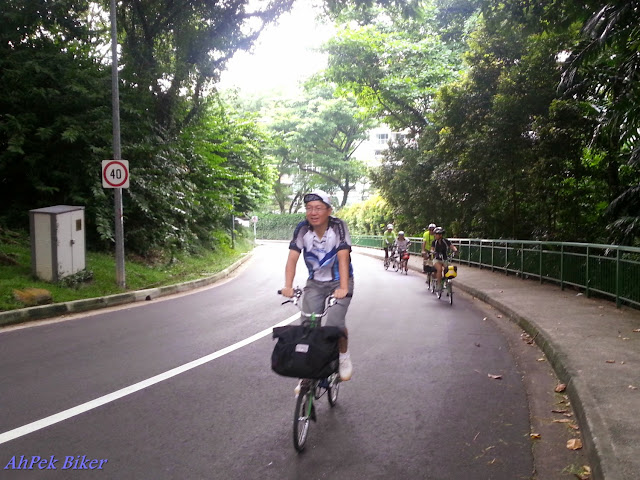 Carbo loaded by the Mee Pok and muscles energized by the fish maw, we were ready to take on something more taxing - Mt. Faber!
The initial part was quite okay, with gentle slopes and shady roads with was rather nice to ride on..... for about ten minutes... 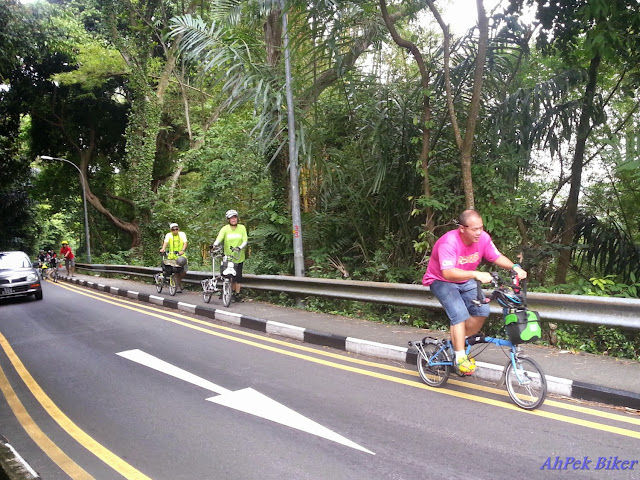 ... and then the road got narrower and steeper. The stronger ones (or perhaps those who took the fish maw like yours truly *grins*) cycled on, while some came down to push.
As a guide for Malaysians, the steepness of the roads here are somewhat similar to Bukit Kiara. The distance is half that of Bukit Kiara, so it's very doable. But do watch out for the cars. 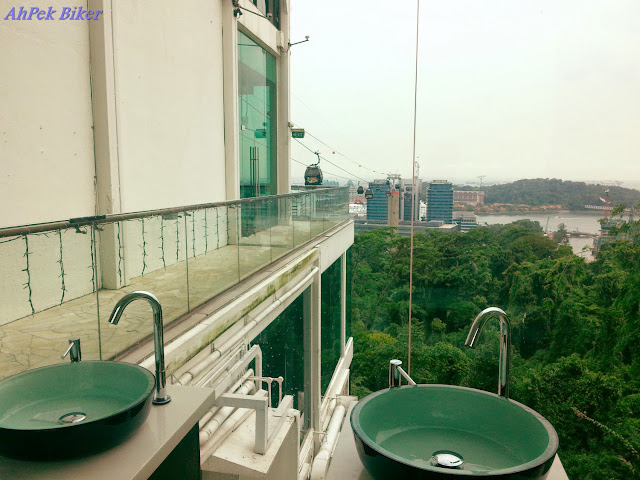 Interestingly, one of the best views of Sentosa Island are from the toilets at Faber Peak. The toilets have fixed glass walls on the seaward side, giving an unobstructed view. Do pop in even if you have no toilet duties to do. 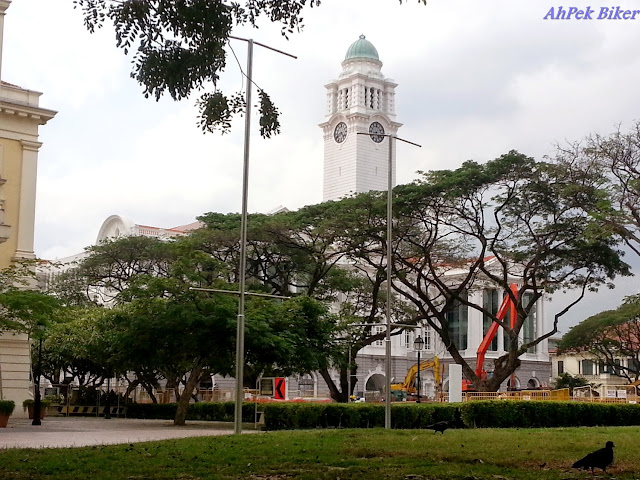 After that taxing climb, we were rewarded by a nice coasting down of the slopes, rode through the Cavenagh Bridge, and headed for a nice little park in front of the Asian Civilisation Museum. Here at the shady, relatively quiet park, we lolled around and chilled off by having ice-cream too.
This is a nice place, it's like a small preserved shady enclave of old buildings right smack in a busy commercial area. To one side is the white Victoria Theatre building... 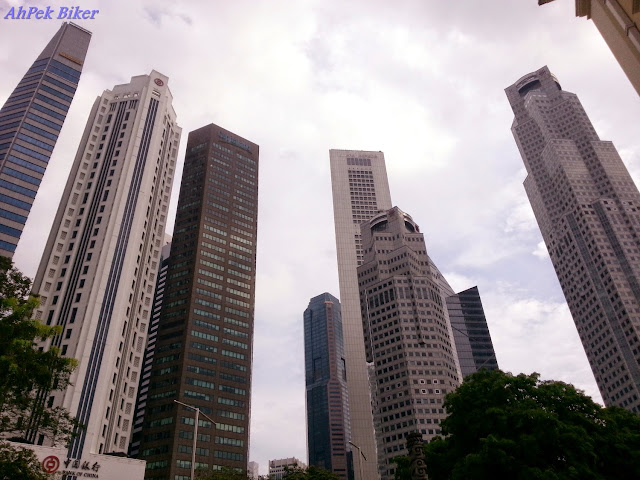 ... and on the other side, the soaring skyscrapers of Singapore's CBD. Sitting there in the shade, slurping my ice-cream, I took in this interesting mix of old world charm amidst the modern day vibrancy. 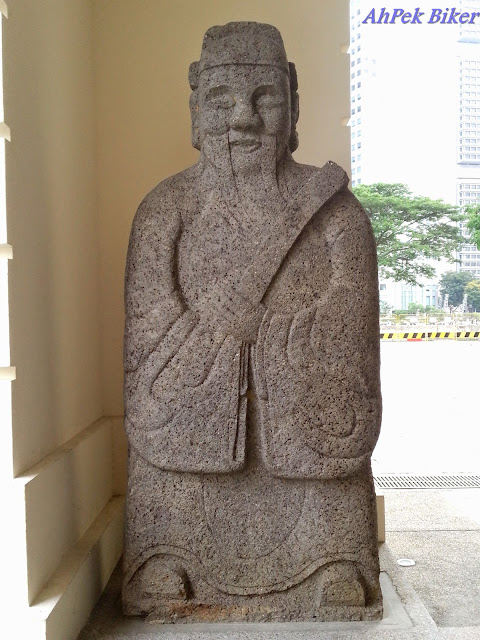 I was most tempted to go into the museum; knowing my weakness for the arts and that I will be stuck there for hours, I refrained. I did the next best thing though, browse around the outside and said hello to this sandstone statue of a Chinese official from the Ming era. 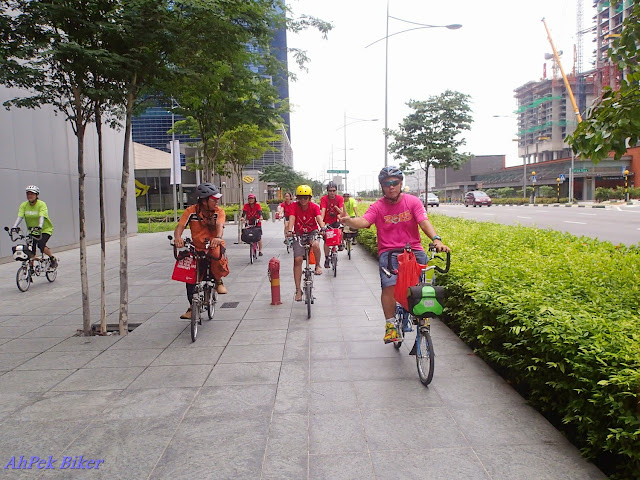 After this some left for other matters (visiting Singapore friends & relatives, etc) and a smaller group of us continued on.
Singapore roads can be busy with fast traffic, but fortunately at many areas there are wide pavements for us to cycle on. 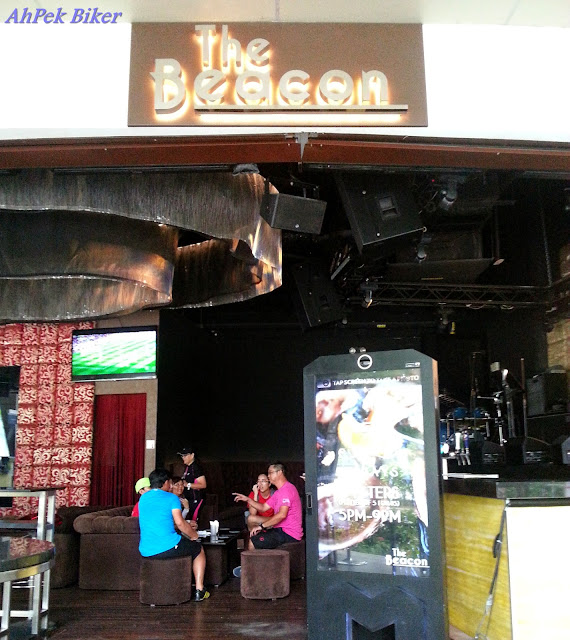 It was a hot and humid day, so we rode to The Beacon Bar & Restaurant to cool off a bit.... 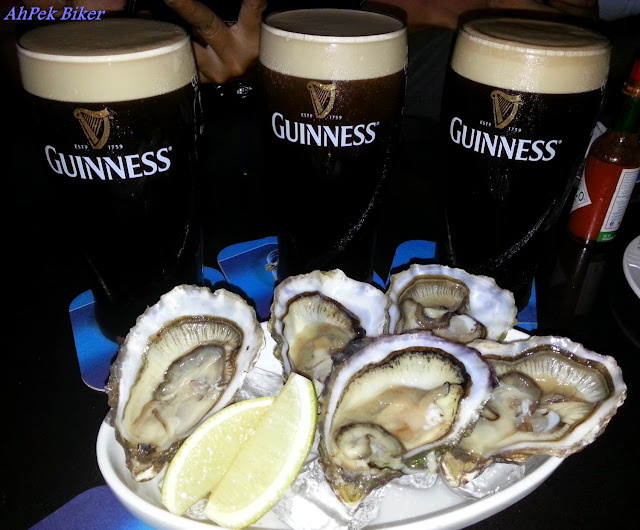 ... with some stout, beer and oysters! It was Happy Hours and the oysters were on an offer; buy some beer and the oysters are at S$1-00 each. But the management limited us to only two plates of these, stating that they had limited stock. Pity.

And then suddenly.... IT'S DINNER TIME!
How time flies when one is having fun. 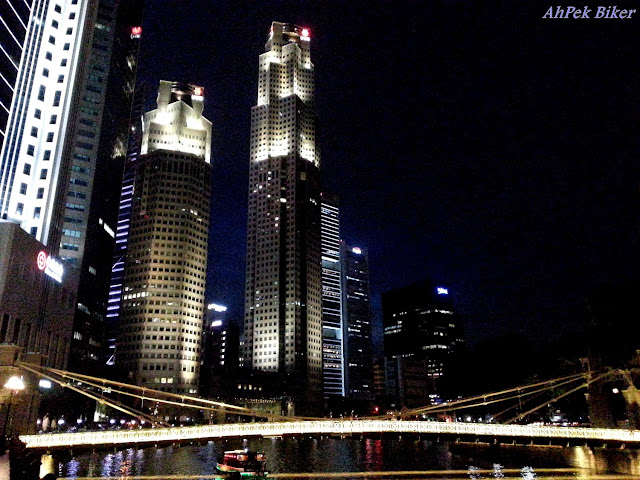 By now it's evening and what better place to go to than the Singapore River to see the night lights and the night life. 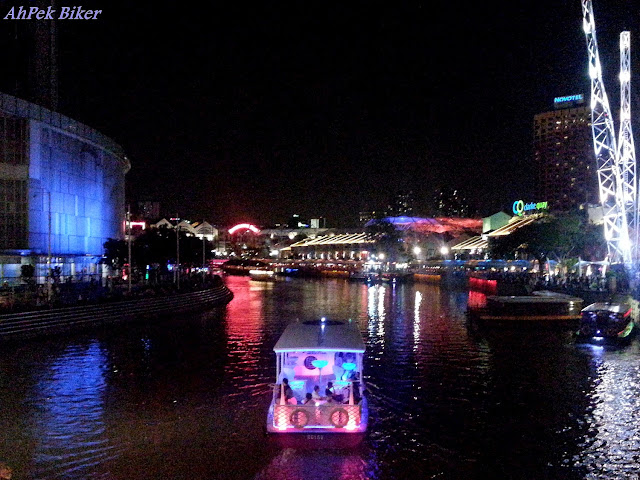 The river and the riverside was now teeming with life, all colourful and active. 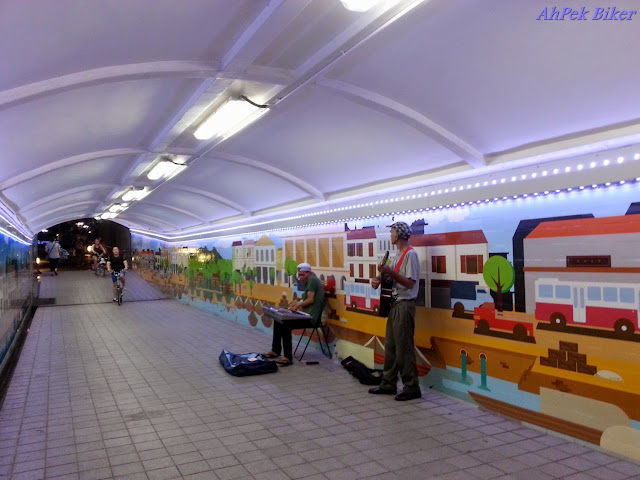 We rode along the riverside and through tunnels with musicians singing inside. 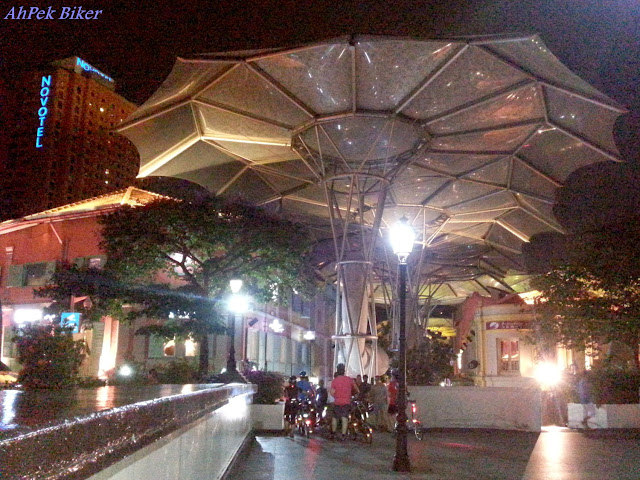 The riverside at night does become quite crowded with locals and tourist; at busier stretches it was more prudent for us to come down and push our bikes. 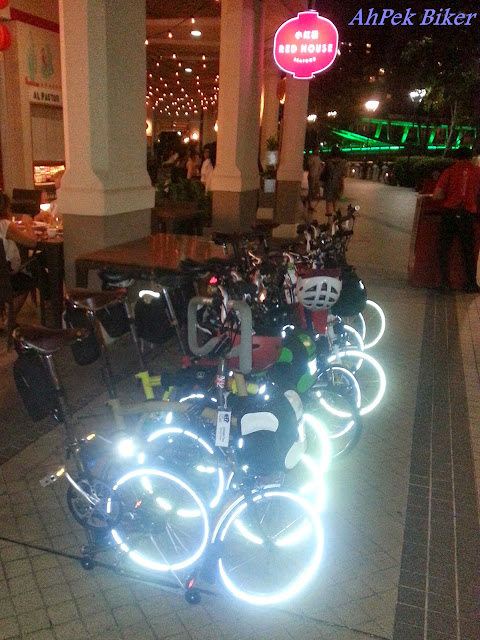 Dinner was at the Red House at Roberson Quay.
We parked our bicycles in a row, their sparkling rims adding to the colour of life here. 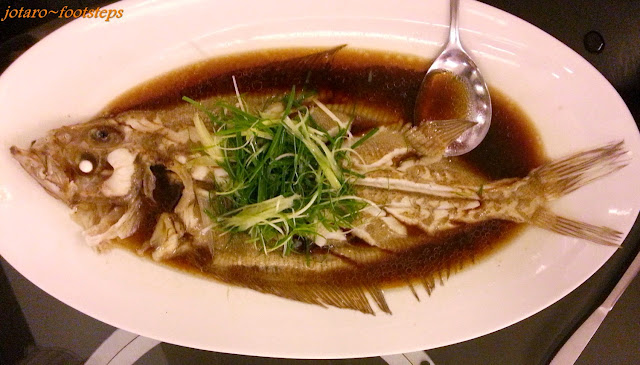 The good thing about eating in Singapore is that as it is a free port, one can expect to find food from all over the world here.
For instance we had this steamed Megrim Sole which came from France... 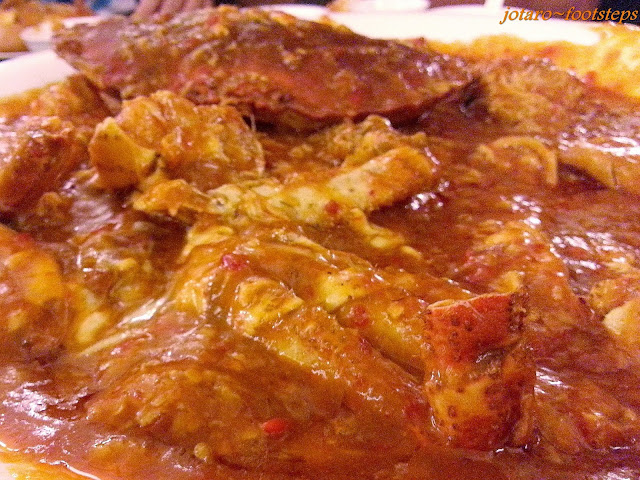 ... and not to forget the renown Chilli Crabs with crabs from Scotland. 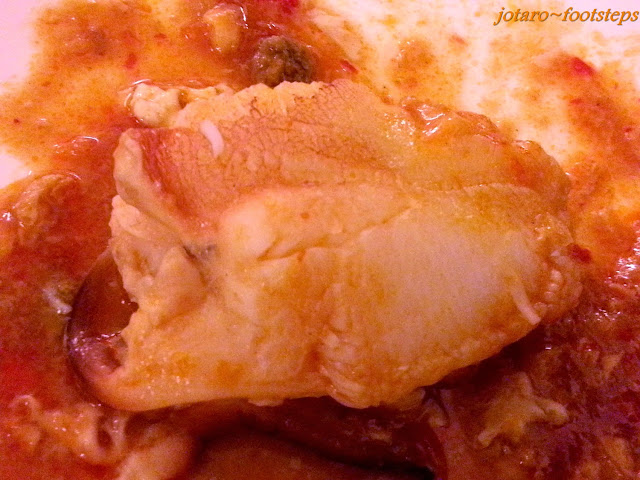 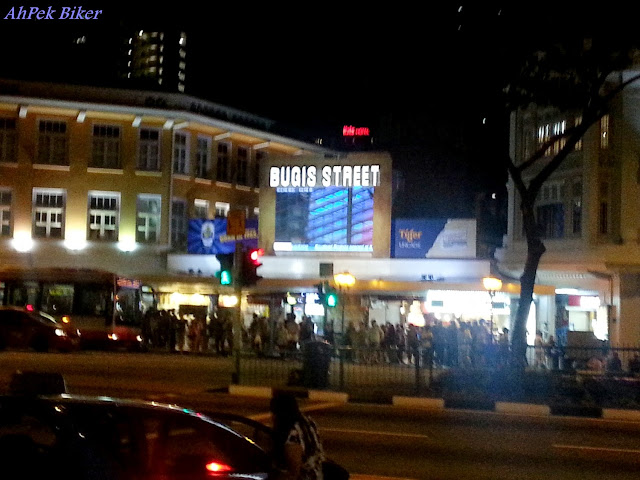 It had been a long and interesting day, now it's time to ride back. Passing by Bugis Street, some of us were tempted to go in and see four ourselves the interesting night life there, but then our comfy beds at Five Stone Hostel were calling out to us. 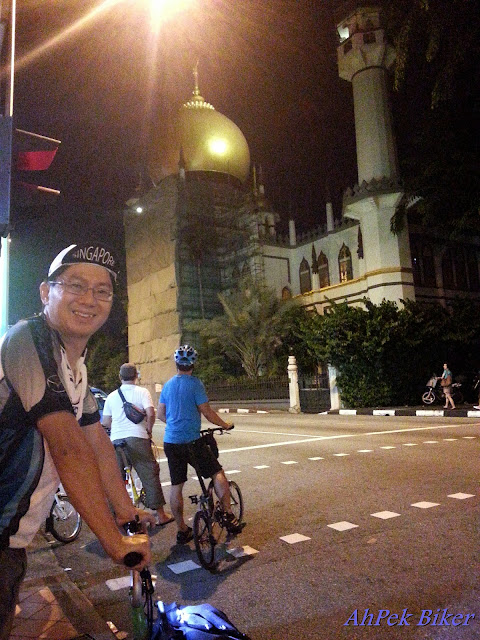 Many thanks LK for showing us round your city.