Today is the DAY!
Today is the day that members of the FOLD (an allusion to the Brommie's easy foldablility) will meet at the 3rd Annual Brompton Day event organized by the Brompton Singapore Group (BR@SG). Most were from Singapore while others came from Malaysia, Thailand, Philippines, France, Switzerland, Hong Kong and even Belgium. We will be eager to meet each other; to trade stories of rides around Singapore and the world, to exchange notes on the Brompton bicycle and it's accessories.
Let's see how the event turned out. 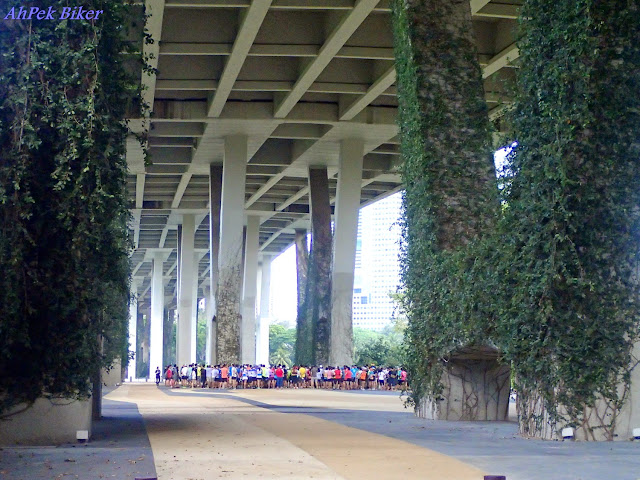 So how did the event turned out?
Well..... the turn out of more than 300 Bromptoneers (330 by the organizers count, including the toddlers that came with their parents) was a pointer of the success of the event. But the size of the crowd was just the tip of the iceberg in measuring how well the event went. There were sponsored goodies and prizes, free drinks, face tattoos, key rings and more.... Age was no barrier, neither was sex. And participation was free.
The only licence required was to come with a Brompton!

The location at Gardens At The Bay East was just perfect too, there under the shady canopy formed by the East Coast Parkway, we looked like tiny ants... tiny mingling ants who were having the fun of a lifetime. We had privacy too, we could laugh, cheer; all without interfering with others. 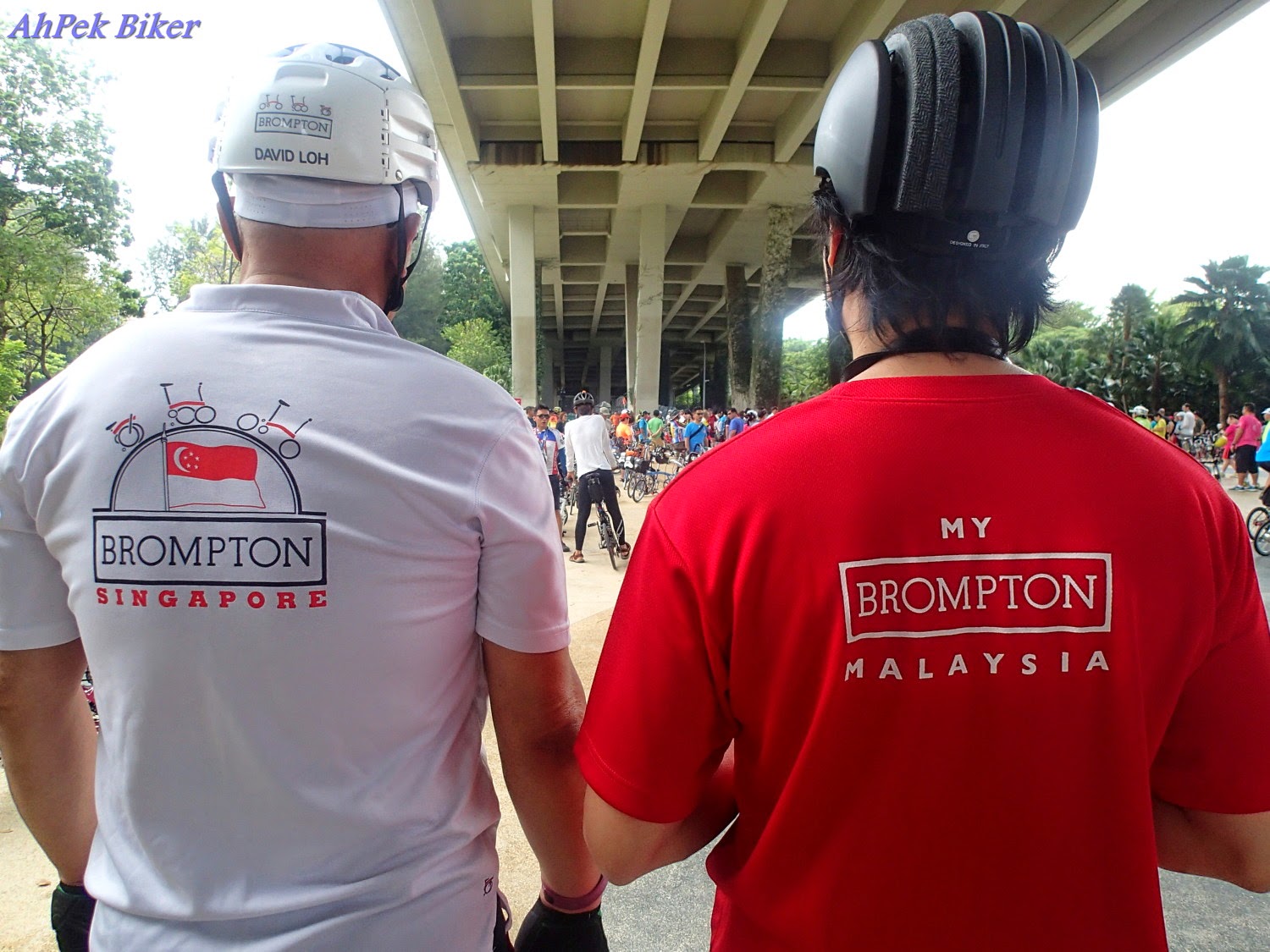 It was an event that crossed borders, bringing together people in camaraderie bonded together by their love of the Brompton bicycle. 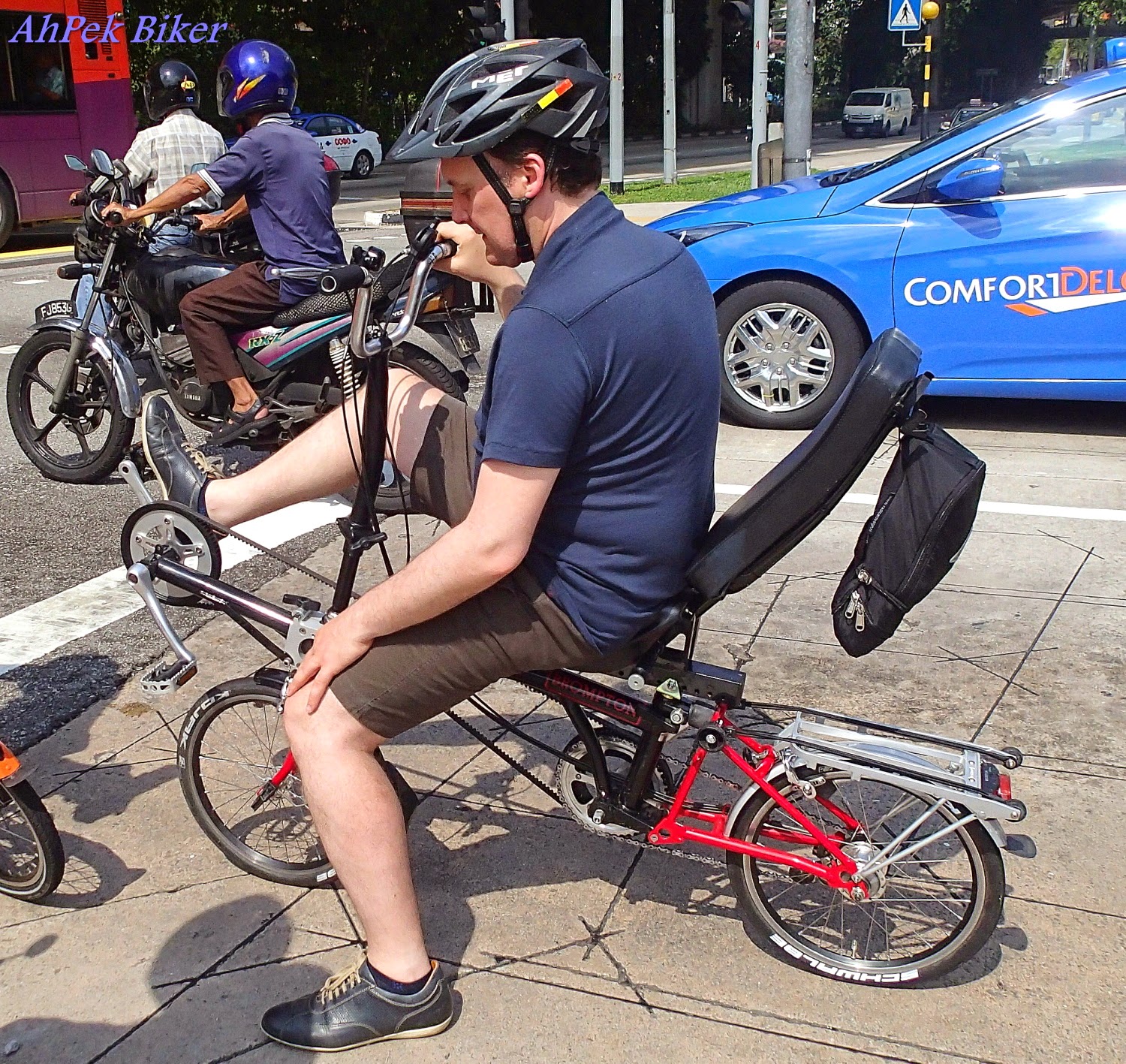 Riders came from many countries; here's Olivier from Belgium on his unique Brompton recumbent bicycle, one of a few that were made and it folds neatly compact too! (click here for more on recumbent Bromptons).

The following photos show some of the people who came to "represent" their countries: 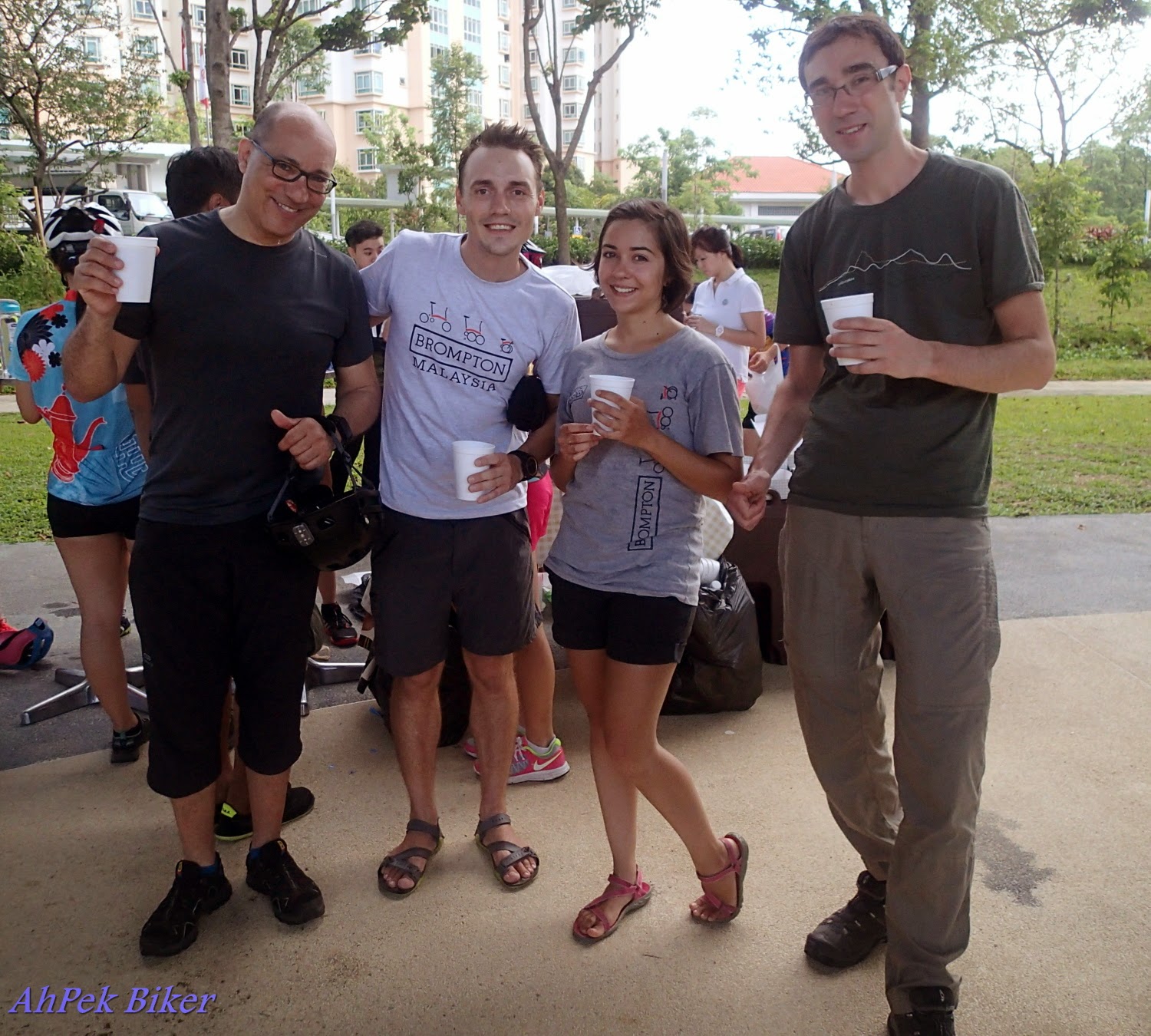 Team France. At the center is Anthony and Caroline, the couple who is doing a world tour on their Brompton bicycles and hope to complete it in 400 days, hence the title of Caroline's Facebook page on their journey 400 jours and her blog http://400jours.com/. 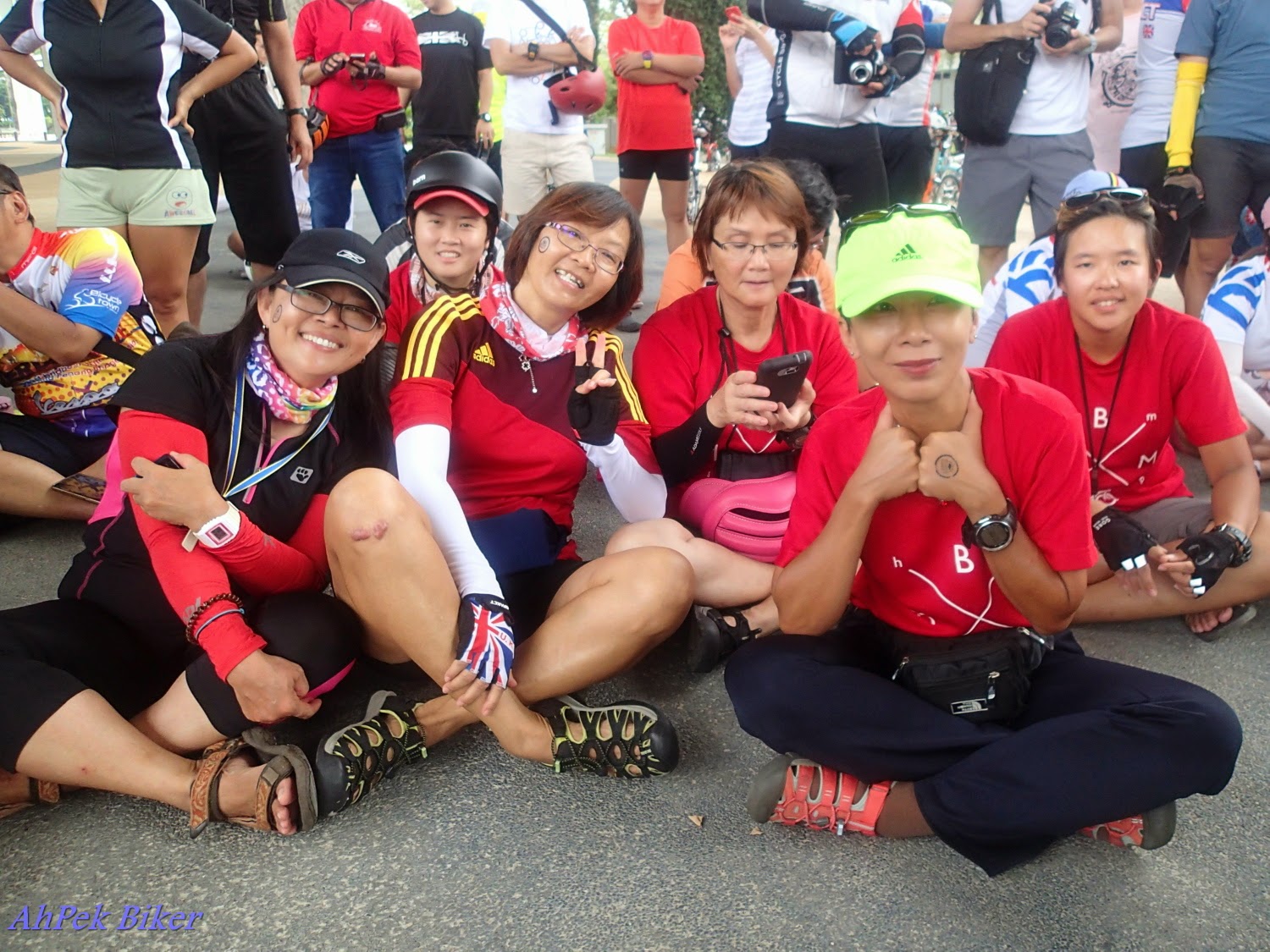 Team Malaysia. Okay.... these are only some of the girls; they are cool looking ladies in red. 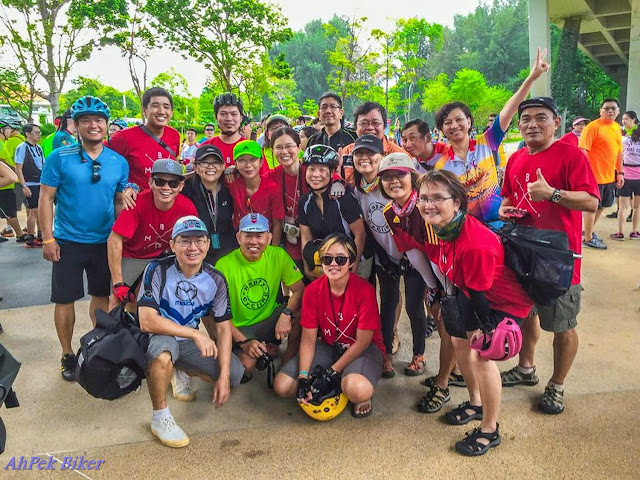 And this is the full Team Malaysia. 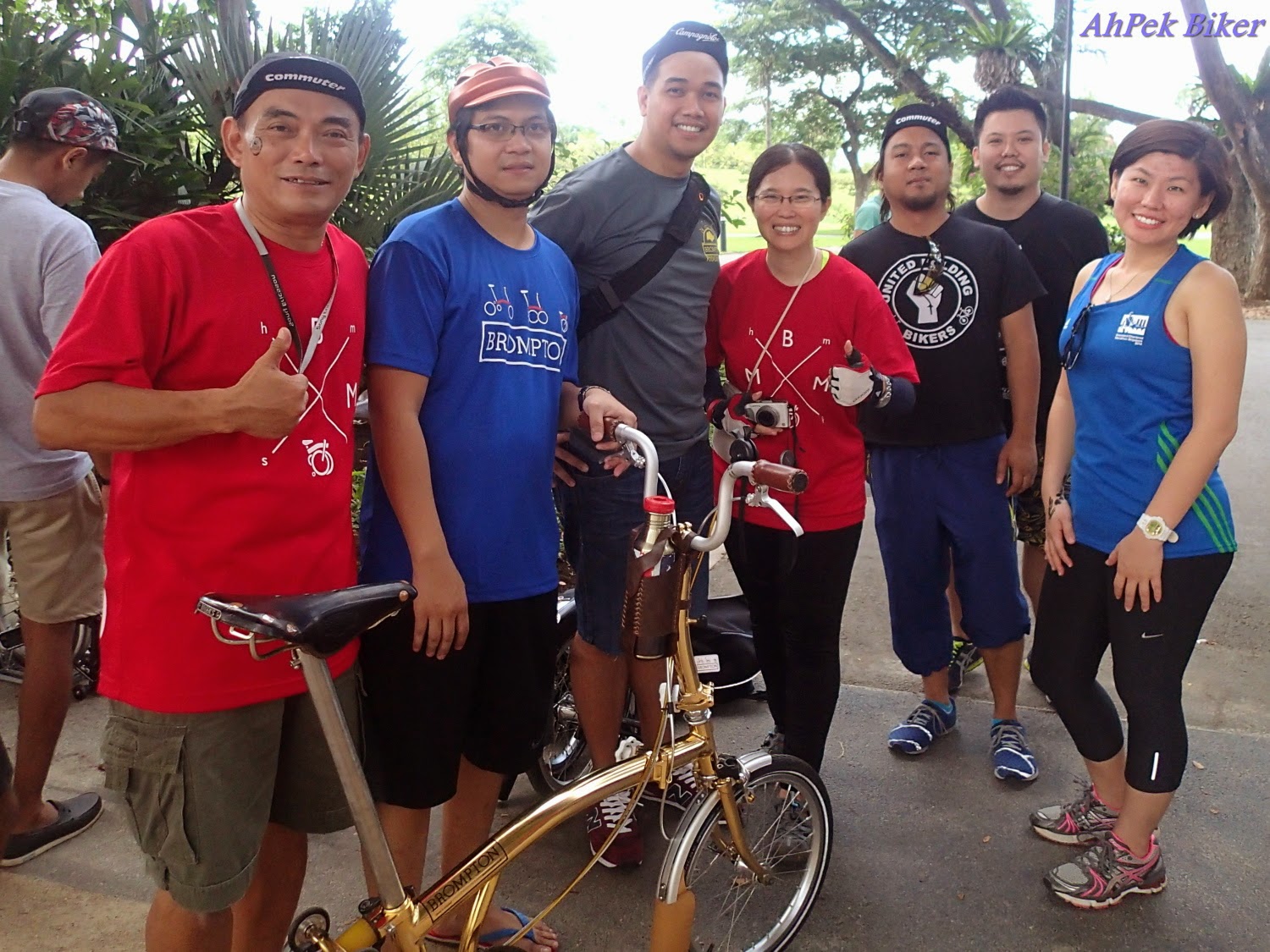 Team Philippines (Ooops, a couple of friendly mingling Malaysian got into the picture too). 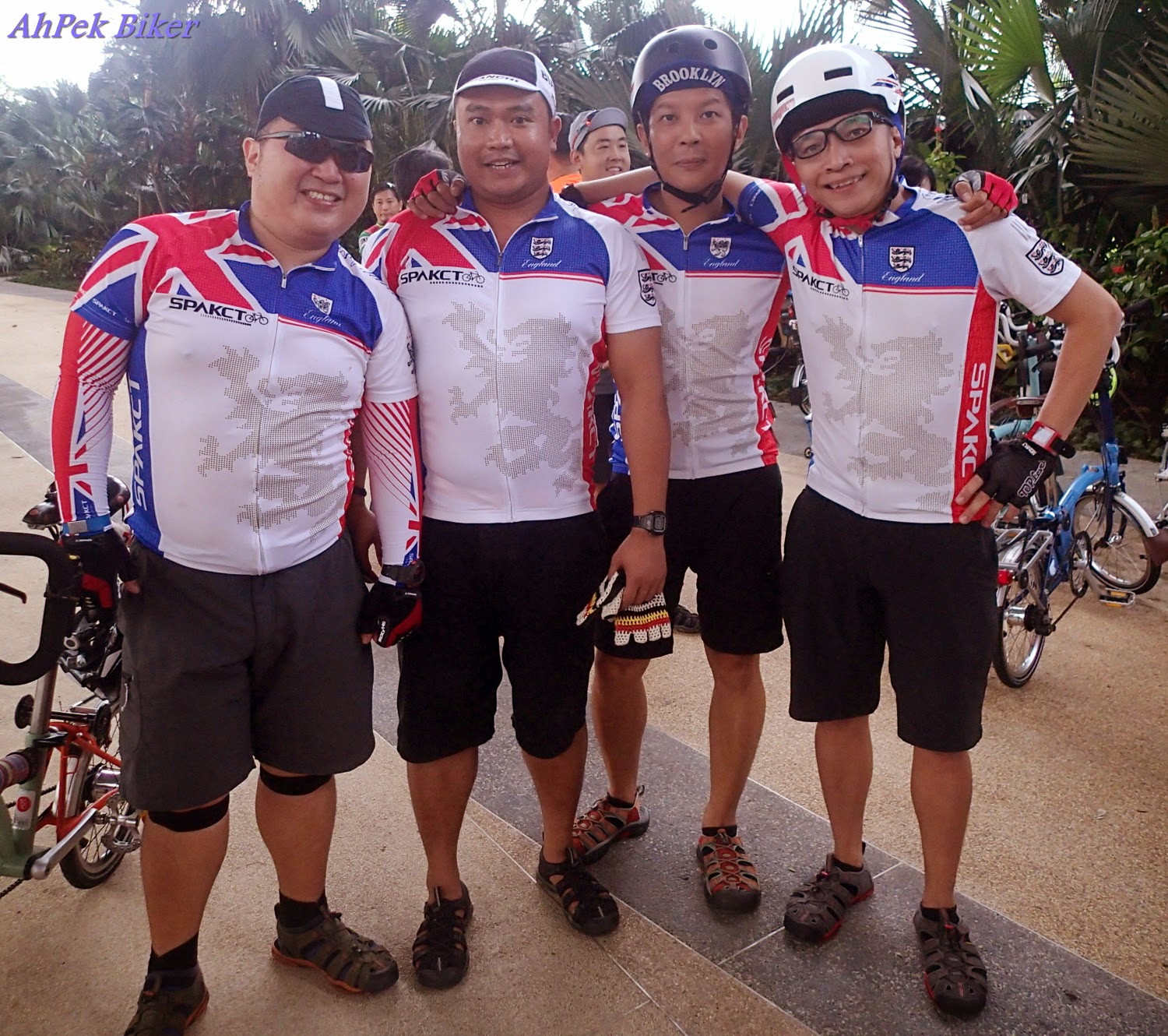 Team United Kingdom? Hmmm.... I don't think so but their jerseys do look good. 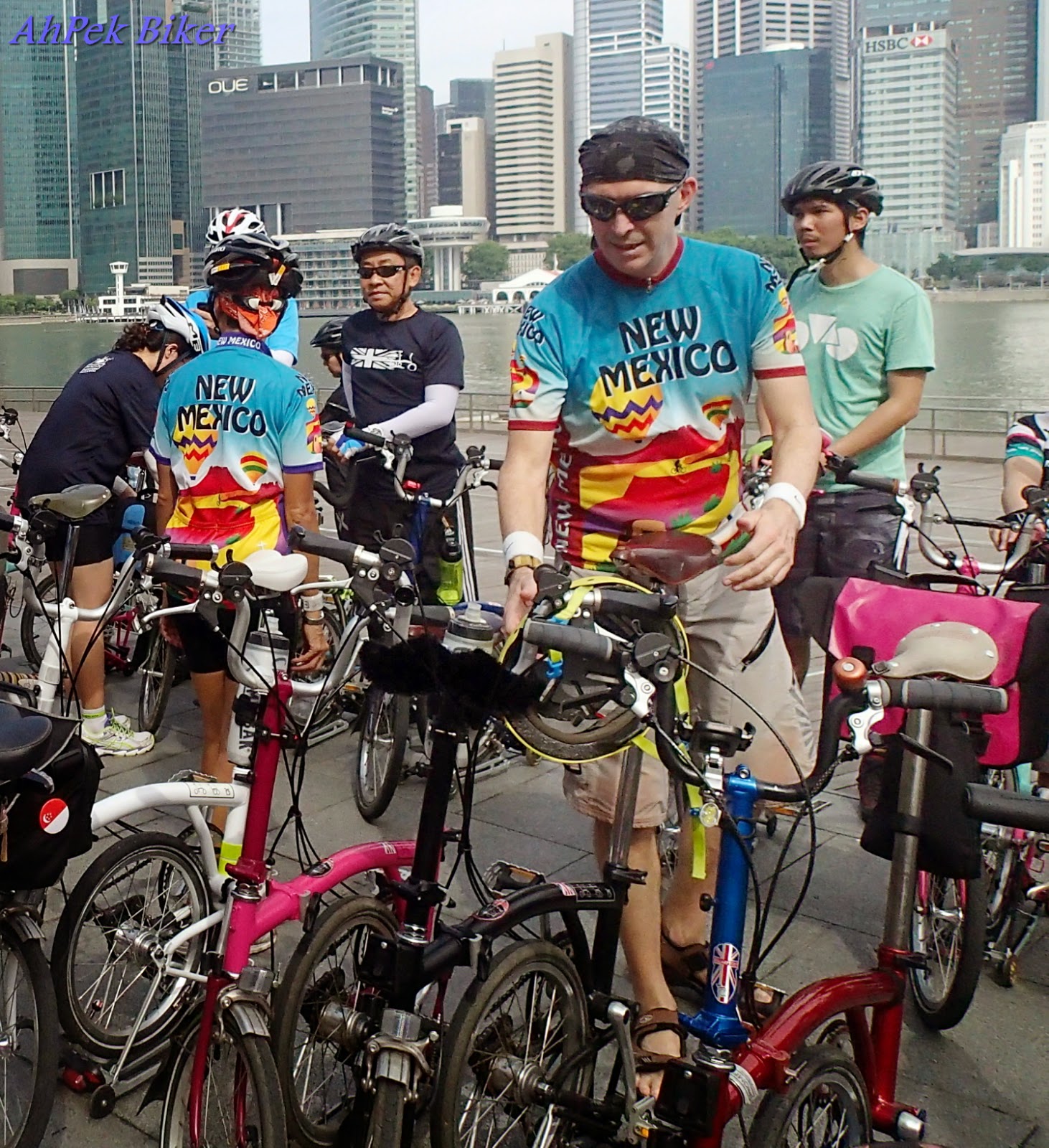 ... and are these guys from the USA? It's possible as Singapore does have a large group of active expatriates.
Somewhere there was a Swiss touring couple and a few from Hong Kong ... the crowd was so big that I just did not manage to meet them.

And then there were the bikes, many done up very well (in fact too many to be shown here): 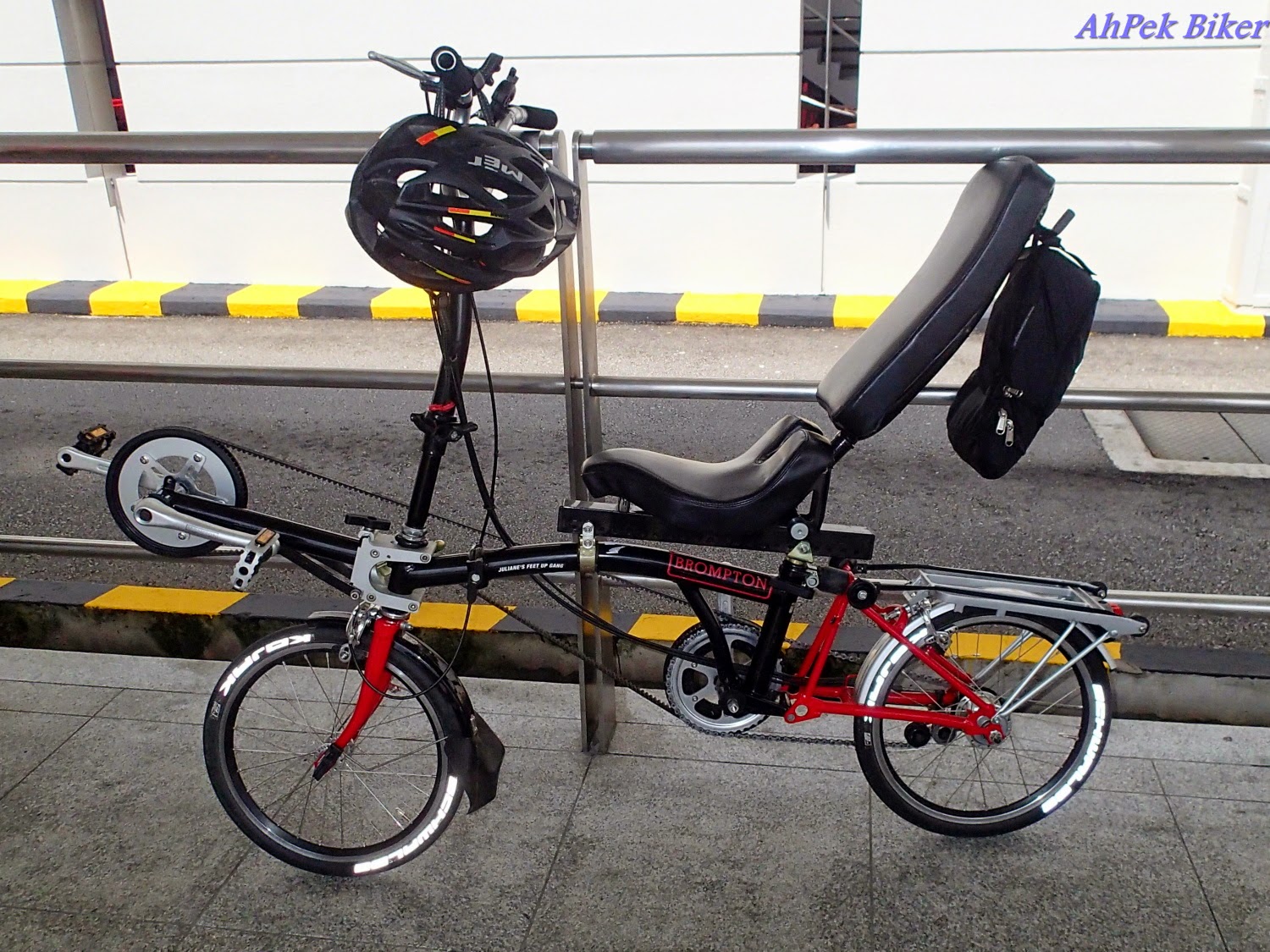 A closer look at Olivier's recumbent Brompton; comfy riding for long tours and it's belt driven. 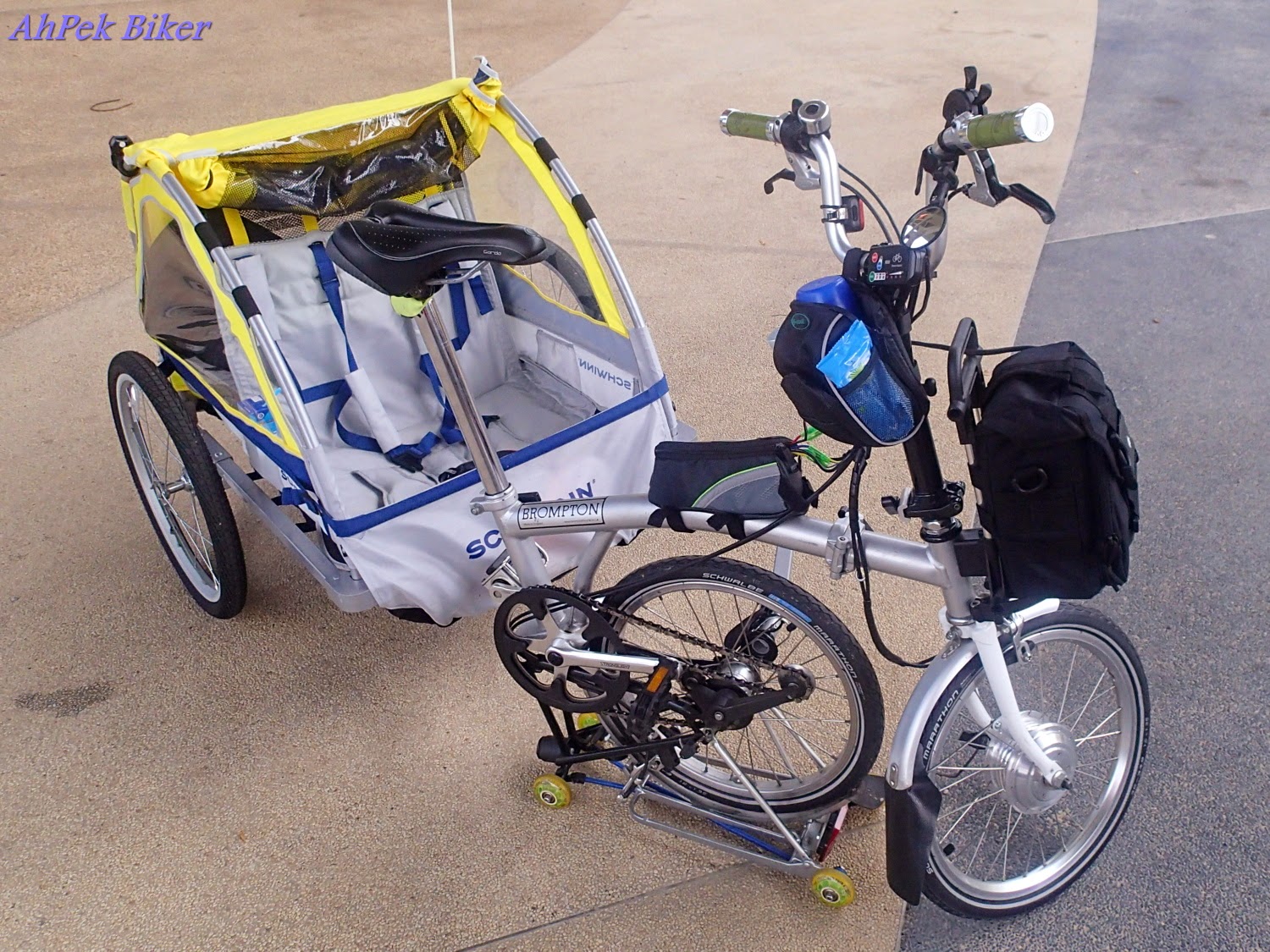 A Brompton with a pram trailer hooked on. The kids can really say that they were hooked to the Brompton from an early age *smiles*. 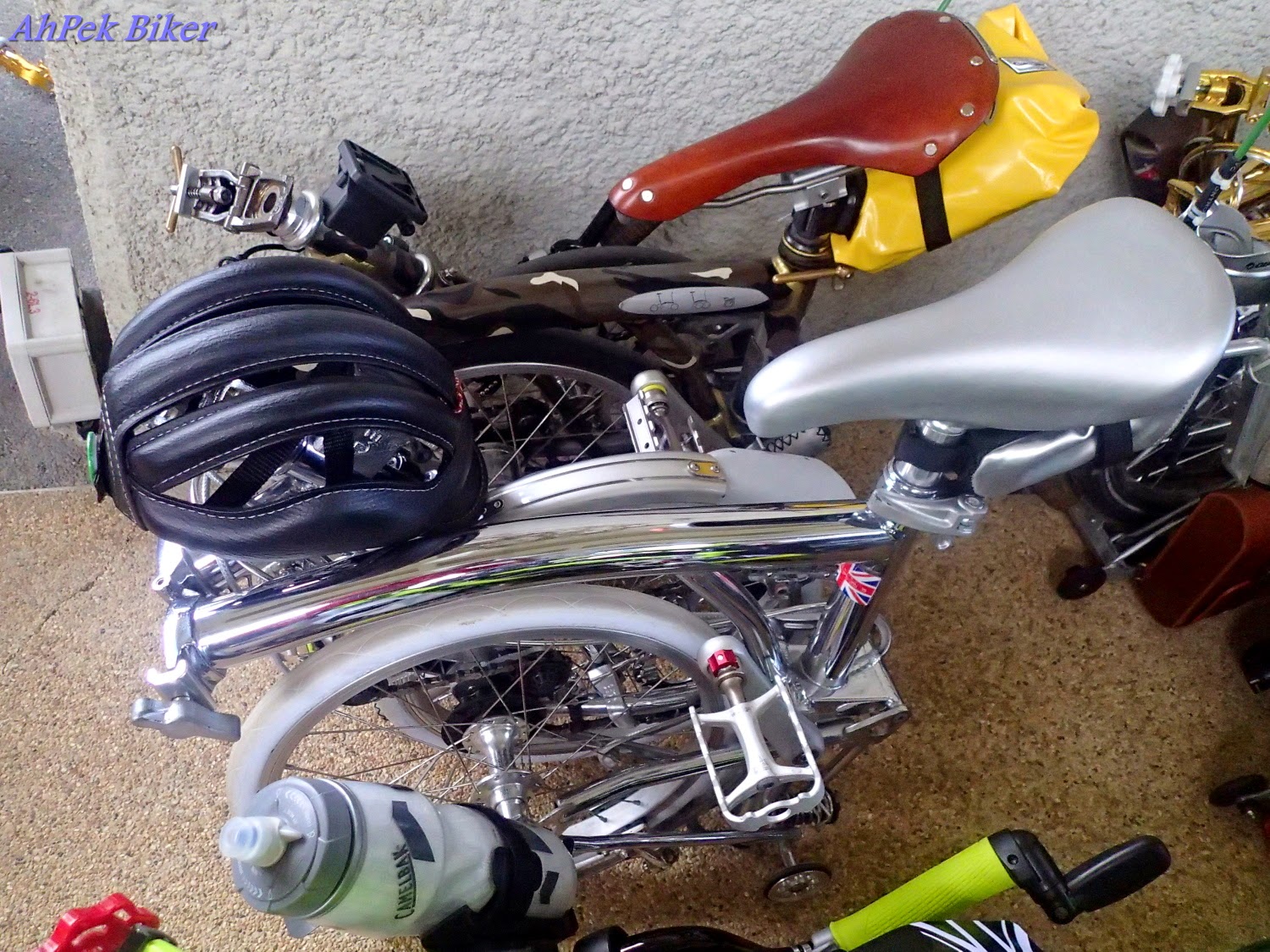 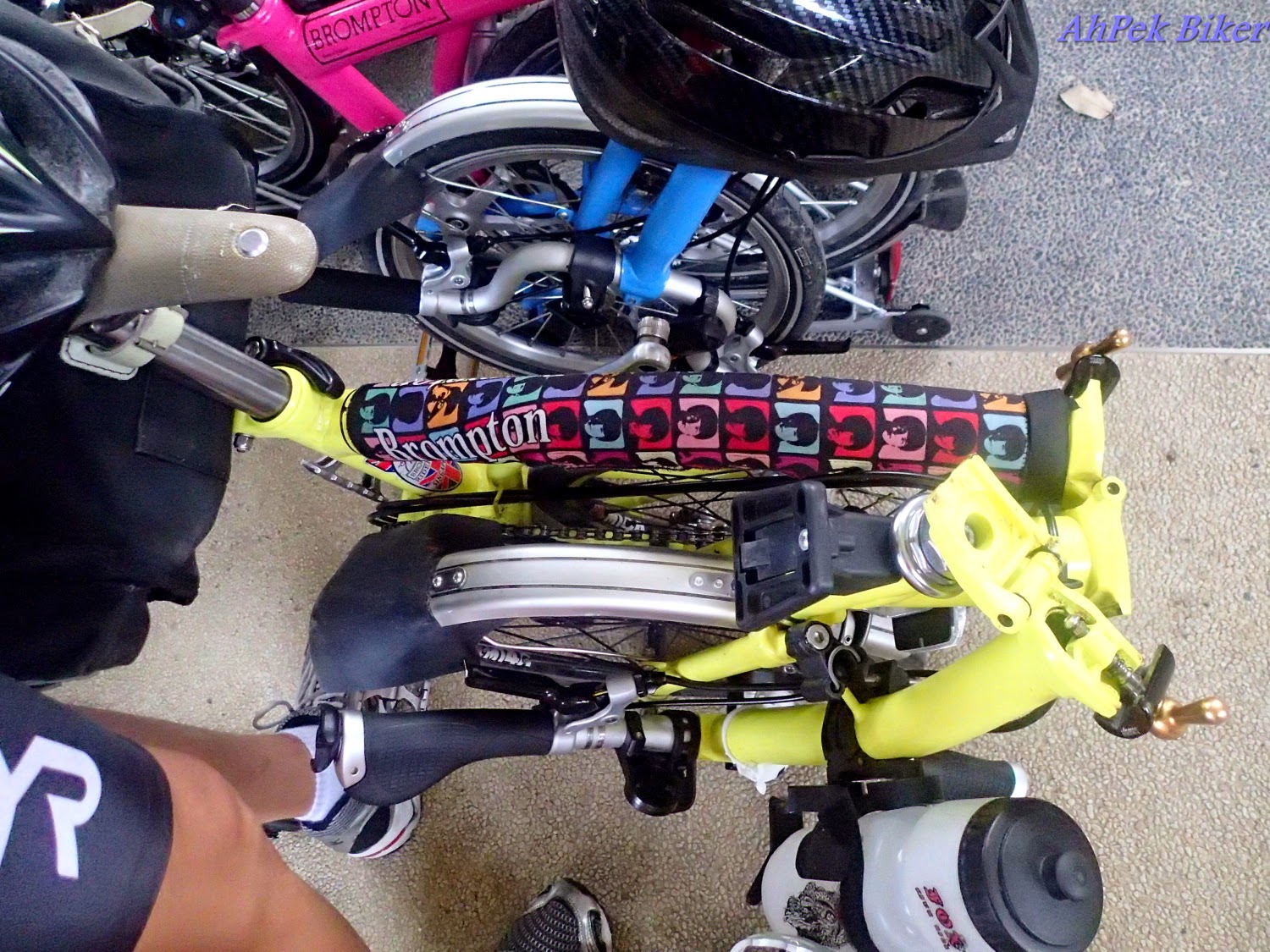 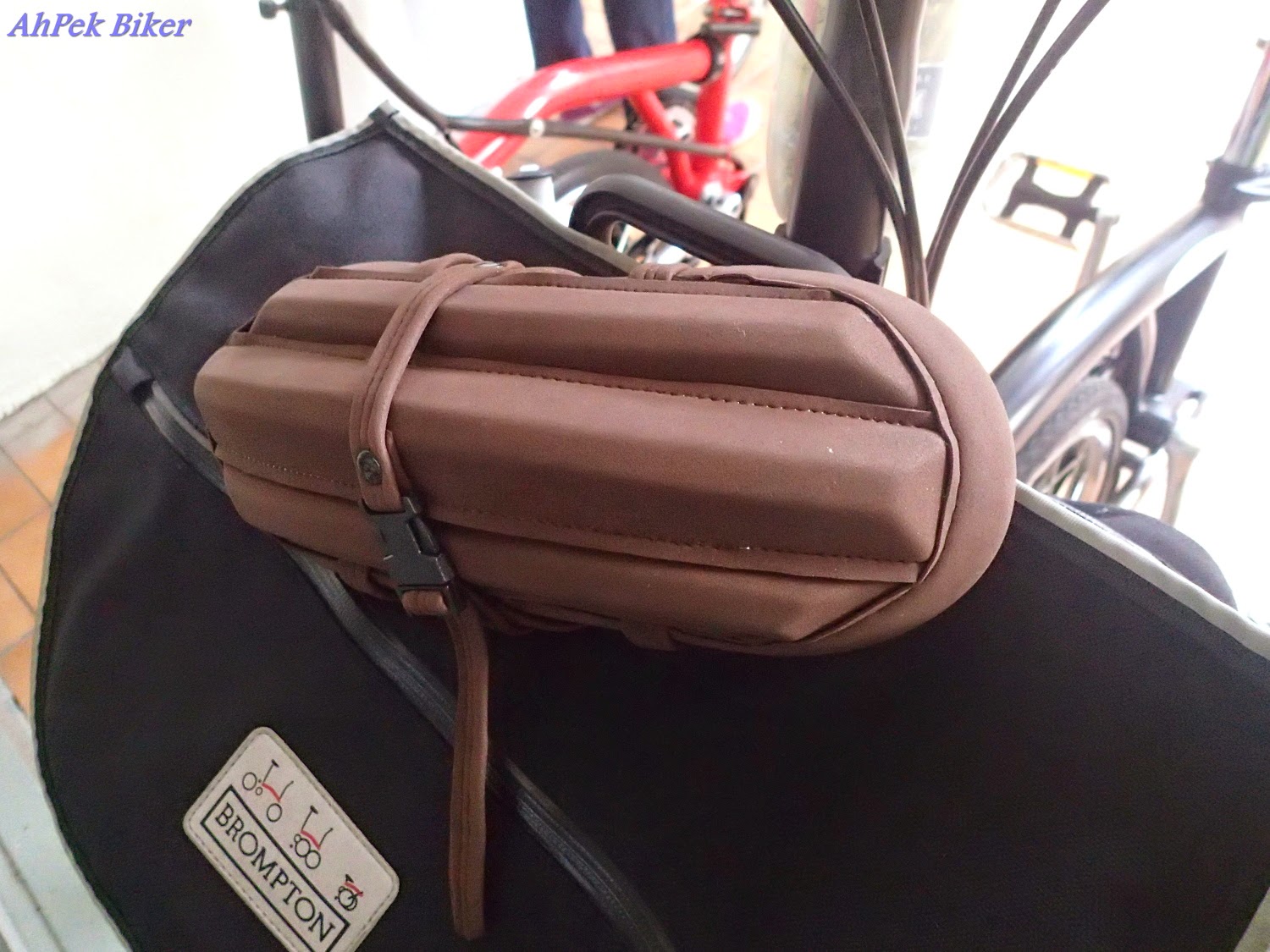 A very compact fold-able helmet, this was worn by Milk the Thai lady Bromptoneer.
What catches the eye also is that red Brompton at the back; it's a classic Mk.I - the original Brompton, a collectors items with only thirty available in the world. I saw a couple of this plus a Mk.II.

Other than the French touring couple, we also got to meet a few other legends of the cycling world: 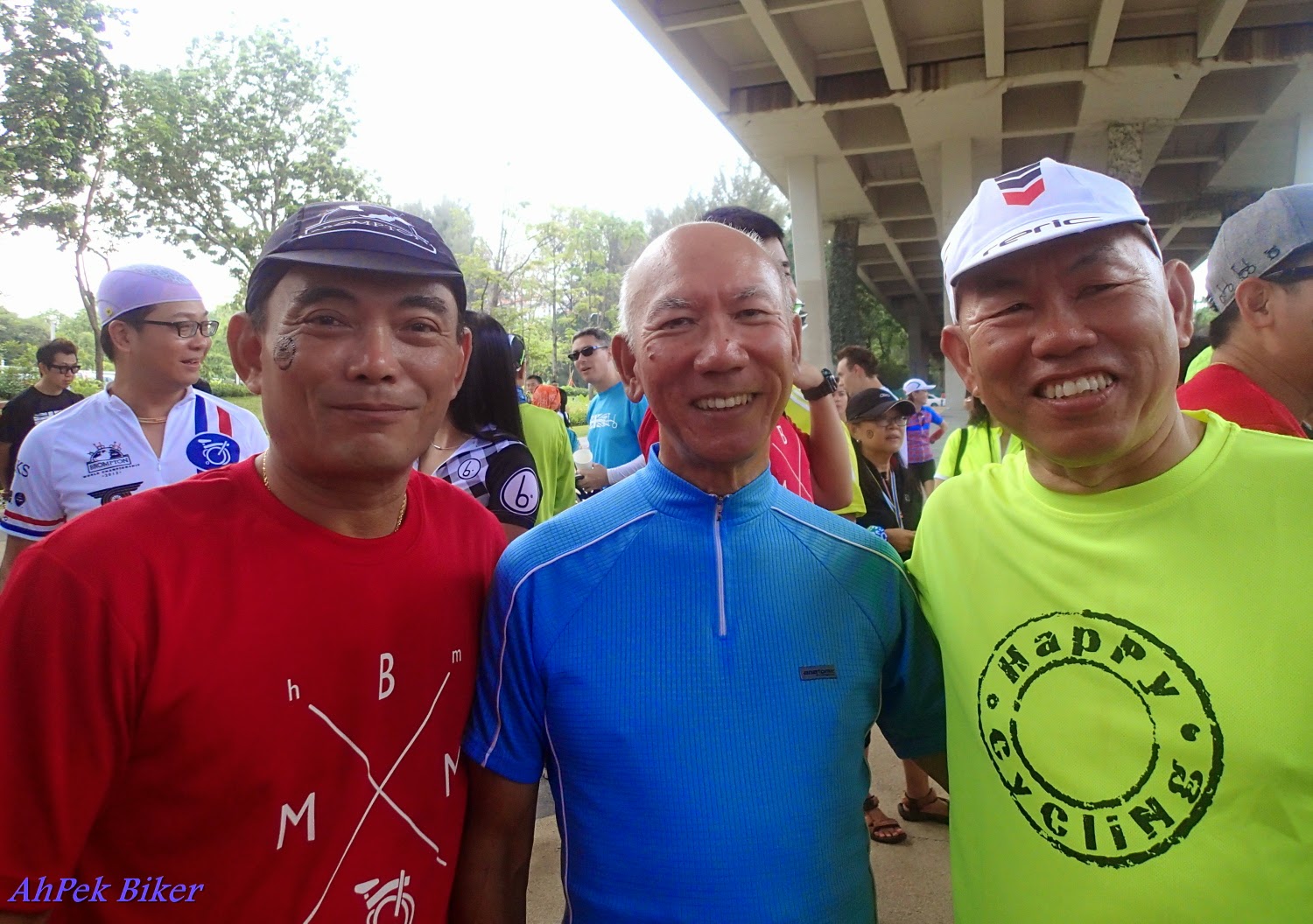 With Chan Mun Thong (in blue), he and his group of fifty sprightly senior cyclists will be riding up from Singapore to Penang soon - the youngest of their group is fifty-nine years old. We do wish them the best and do hope to meet them in Kuala Lumpur.
In green is Sin, another avid blogger (... see his blogs at hApPy HaPpY).

A sight to behold, our bikes parked within four giant legs of the ECP (East Coast Parkway); all nicely folded and sitting comfortably.

While on the other side we sat comfortably too, in a semi-circle around Emcee MC Chris. The games were about to start! 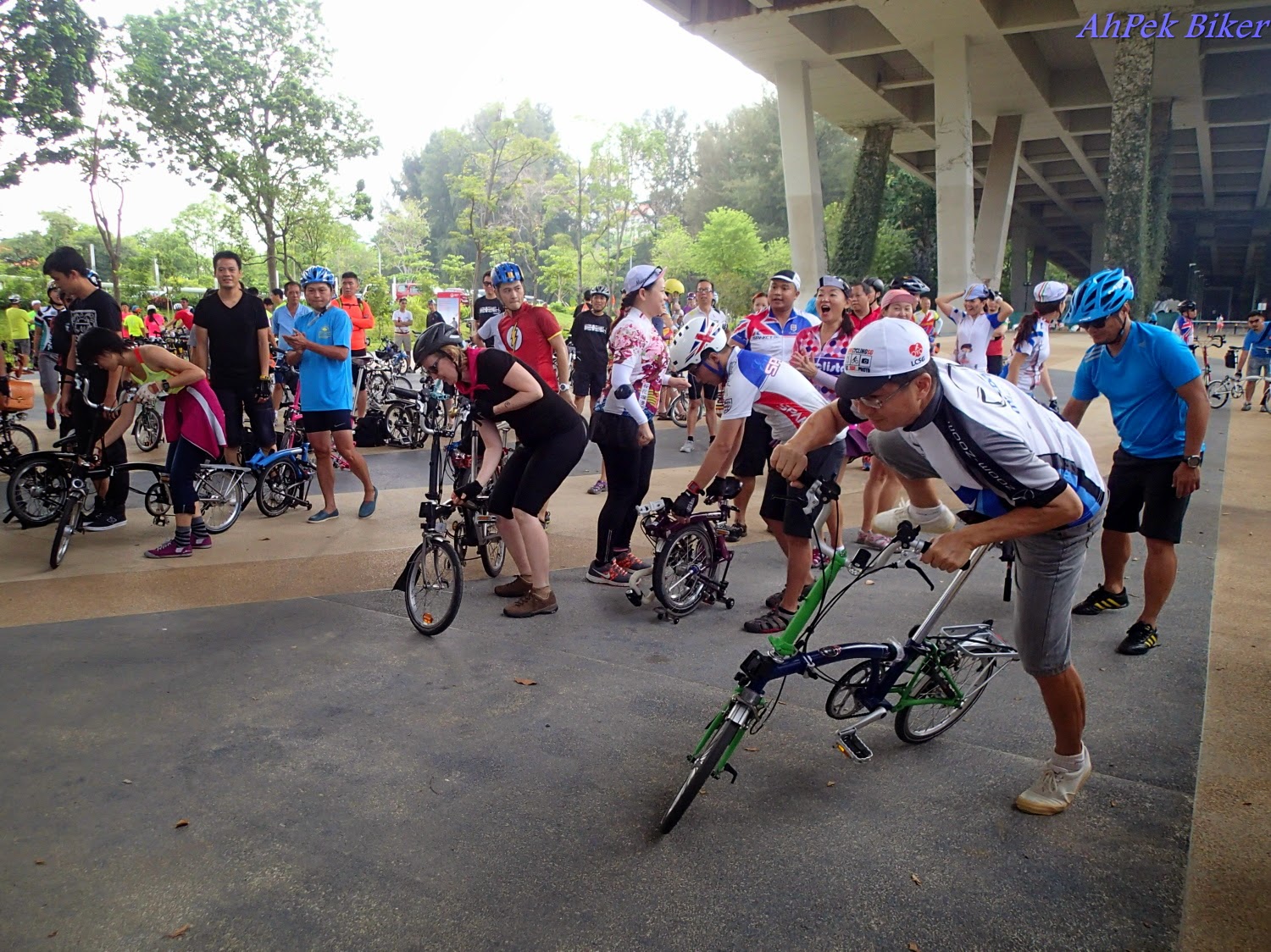 The fastest bikers race; the were two of this one an individual event the other a team event with cyclists representing their countries. Win or lose it didn't matter, there we were cheering our mates on.... of course there were prizes for the first three winners! 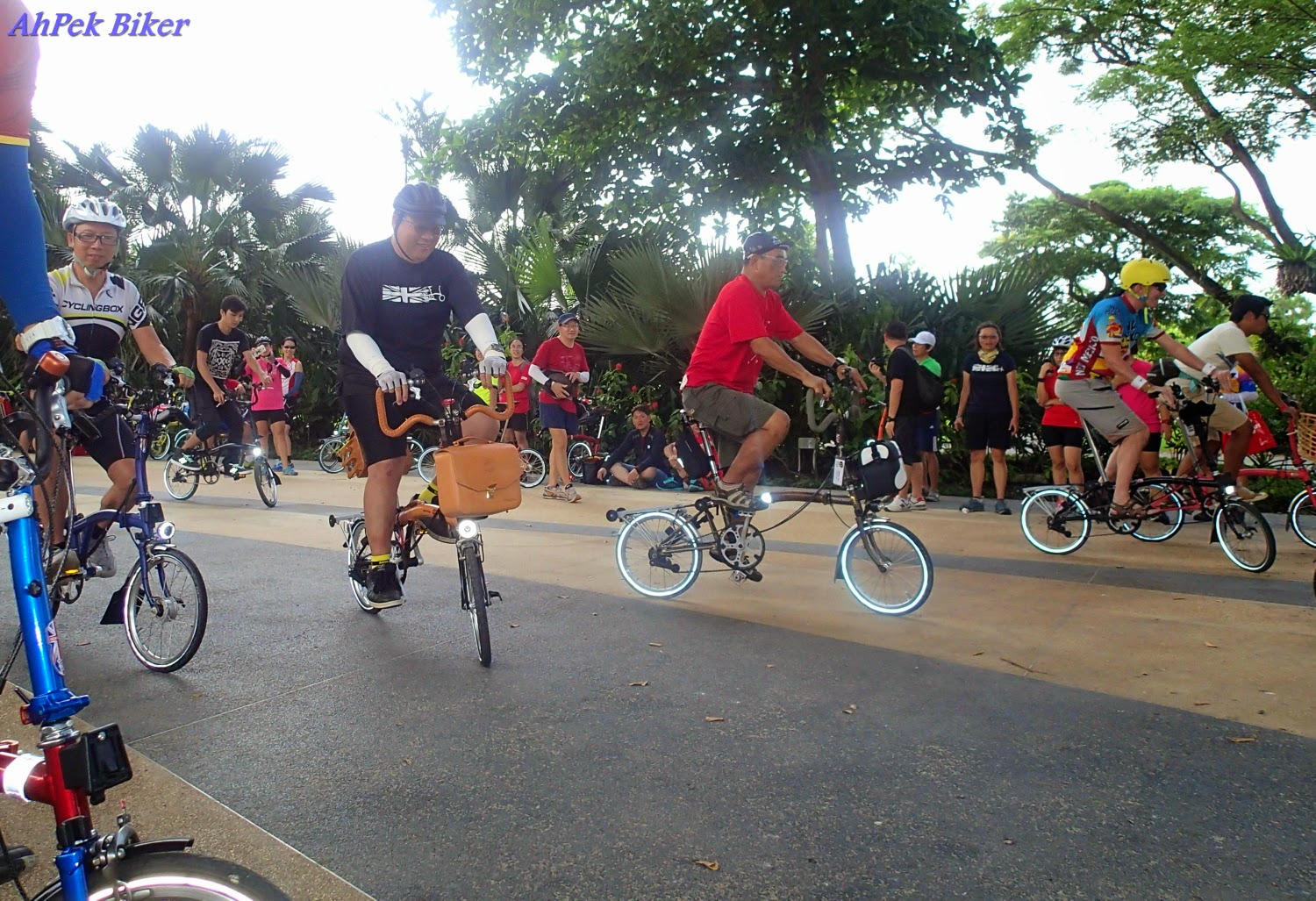 And the slowest rider race; the last one over the finishing line without his feet touching the ground in the winner. I tried my hand (or rather my feet) at this; although I am a slow rider, it was no easy feat keeping one's balance while trying to move as slow as a snail.

THE RIDE
No point having a bike and not riding it, yah? That's what the organizers had in mind and they took us on a casual ride around the Marina Bay area and slightly beyond. 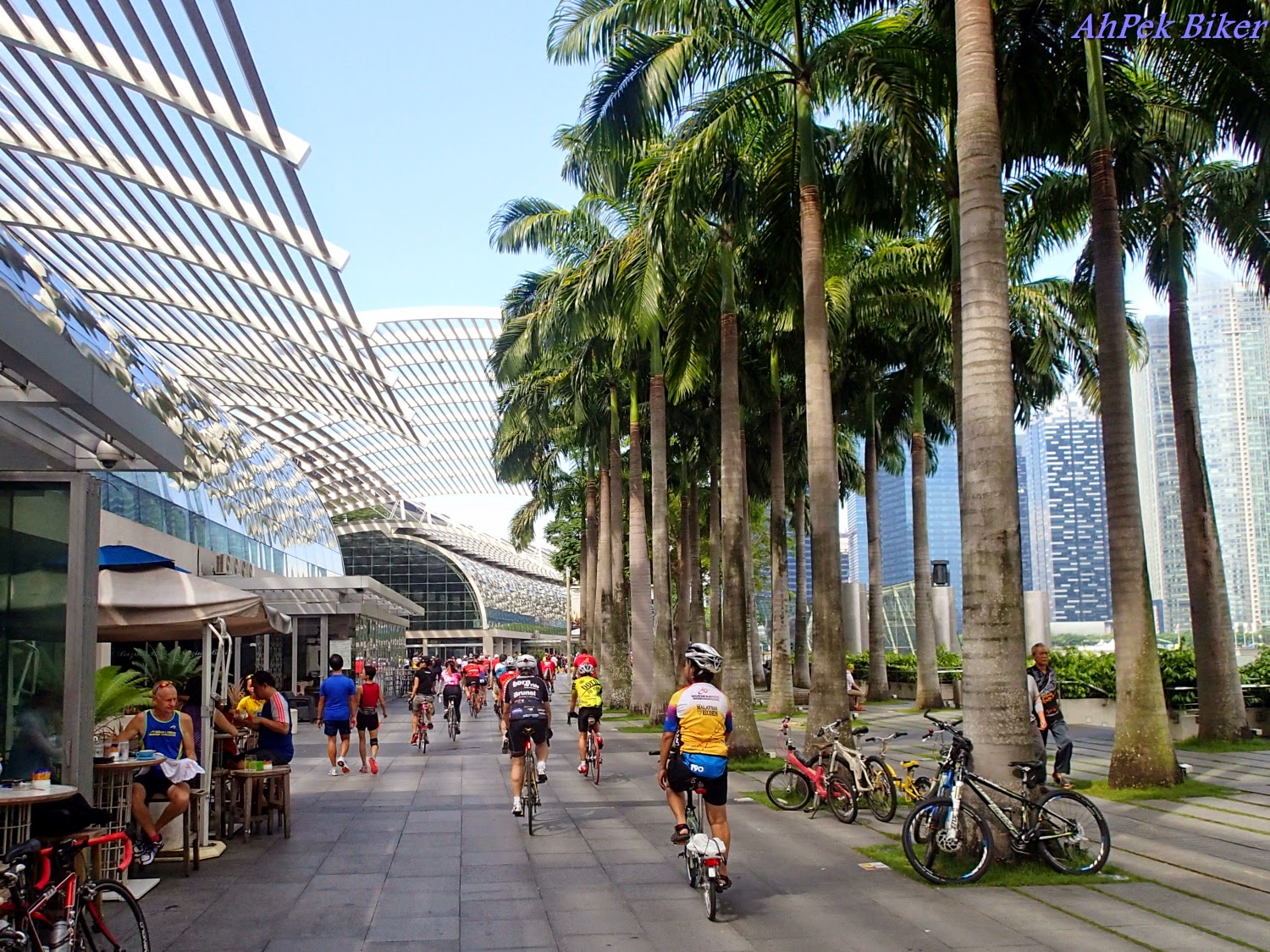 The Marina Bay area is always a pleasure to ride along (both day & night), it has wide paths and beautiful scenery along the way.

Somewhere there, a group photo for keepsake. Nice yah? 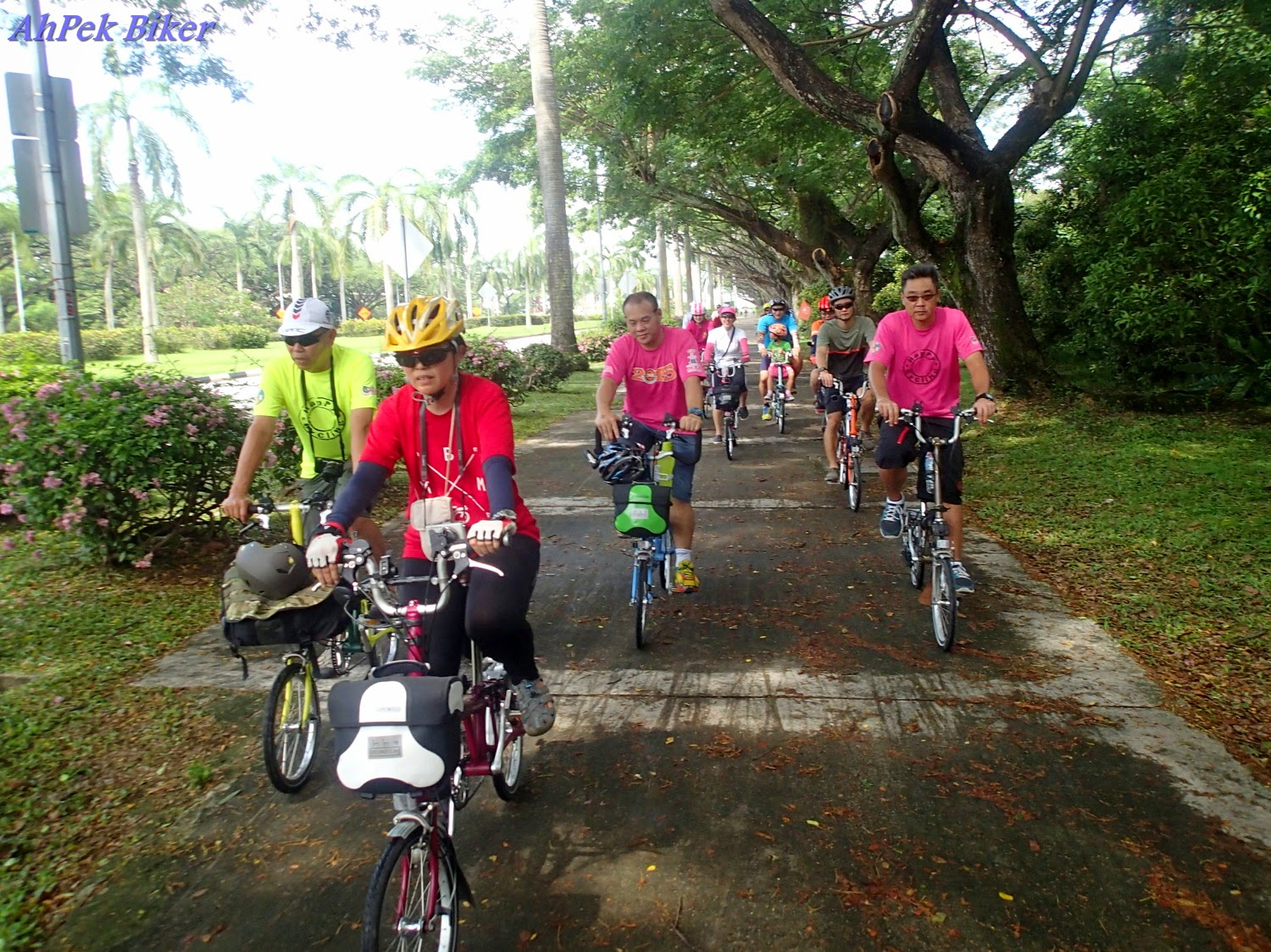 Out of the Marina Bay and along shady tracks next to the highway. 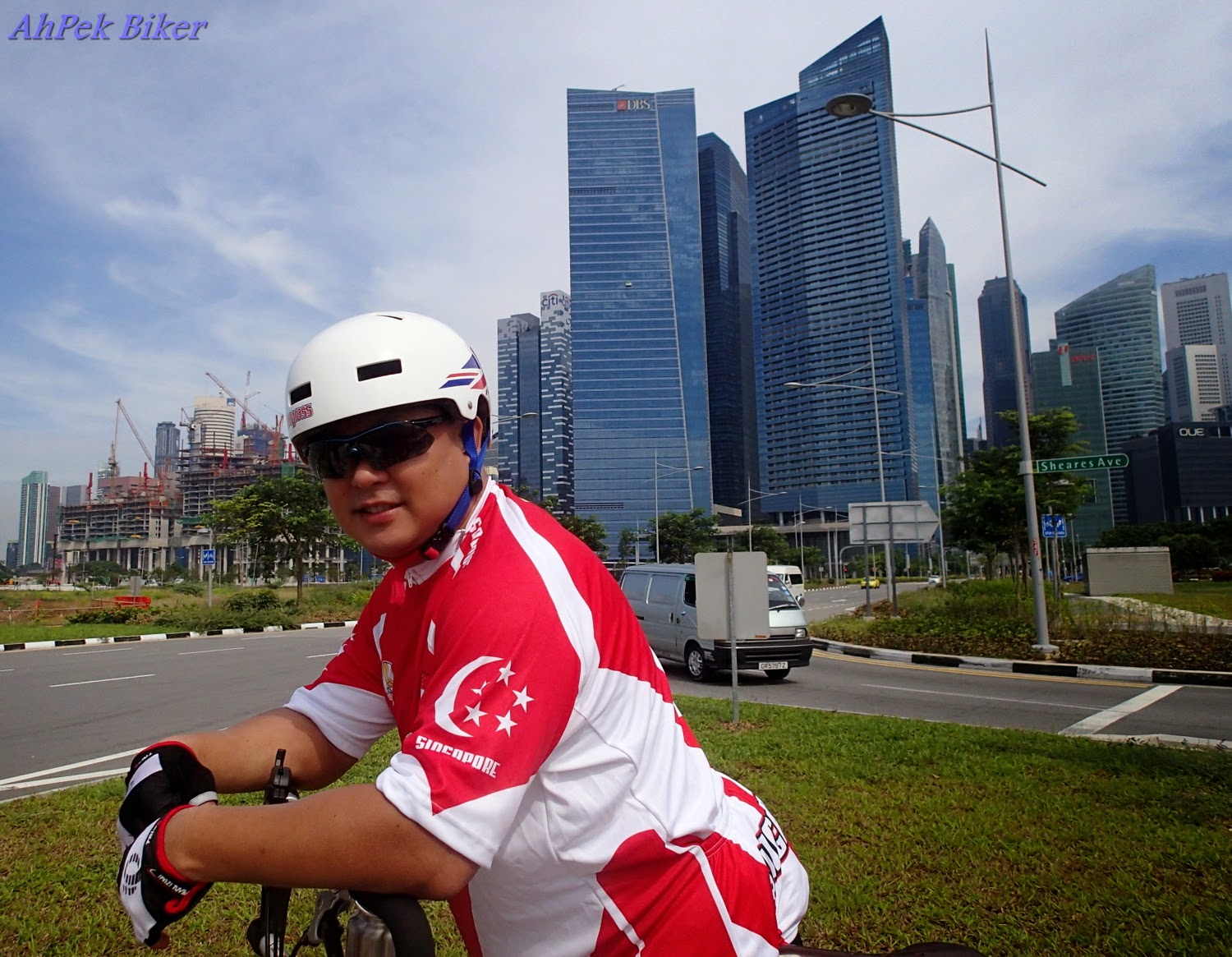 At the newer area it was open and slightly hot but still scenic.
I like this fellow, his jersey shouts out "Proud to be a Singaporean!". 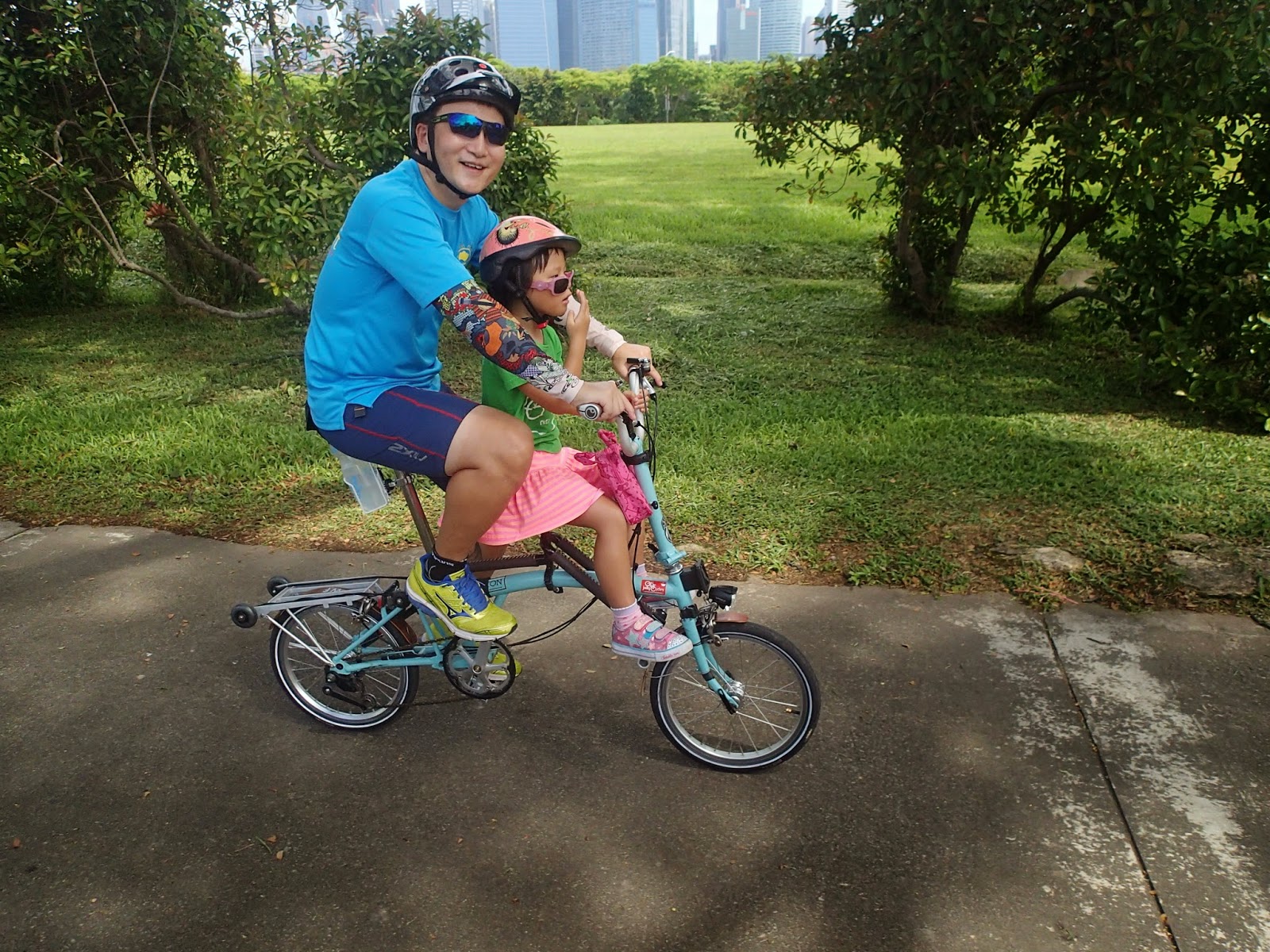 It was a easy, casual ride; a family ride of sorts - our Brompton family.
Some really brought their family along like this father and daughter, and also a couple with their toddlers in a pram trailer. 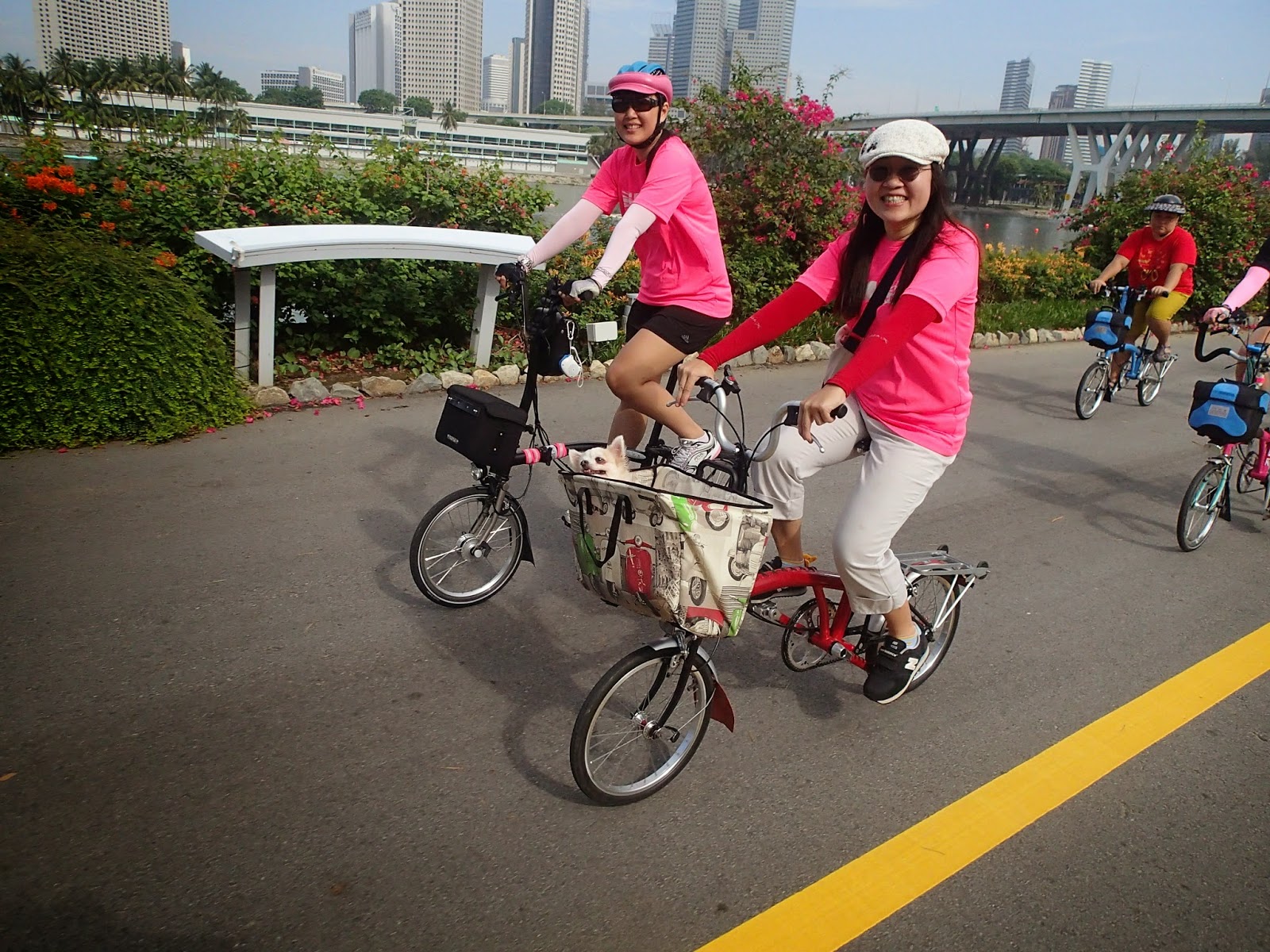 Others even brought their pet dogs along. 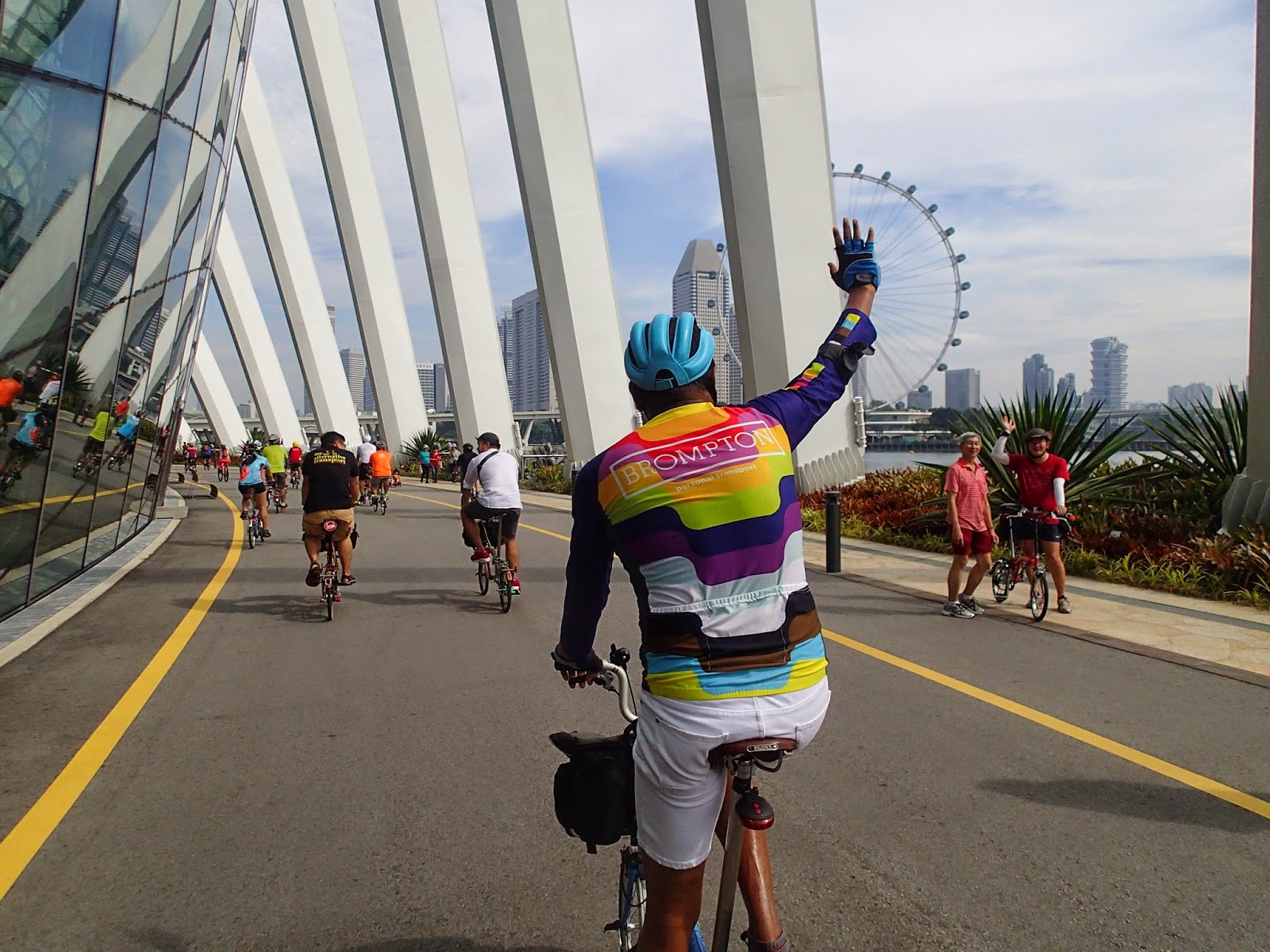 ... and along the way a friendly Hi! from friends.
The only set back were others on racing bikes, speeding along; shouting out for others to keep out of their way. Don't they realize that there is a speed limit here. Damn!

Back at the event point, it was an atmosphere of festivities and gaiety. 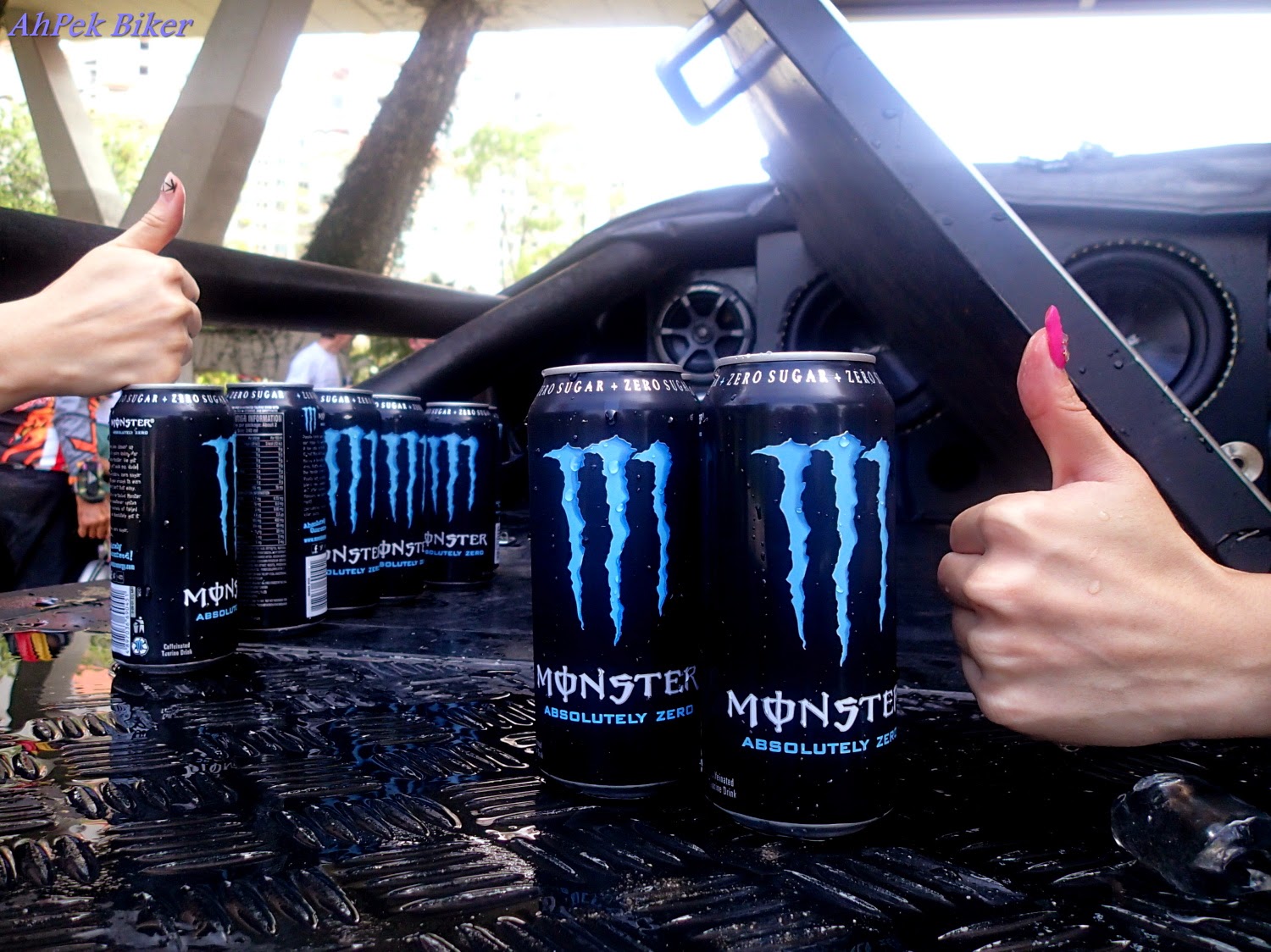 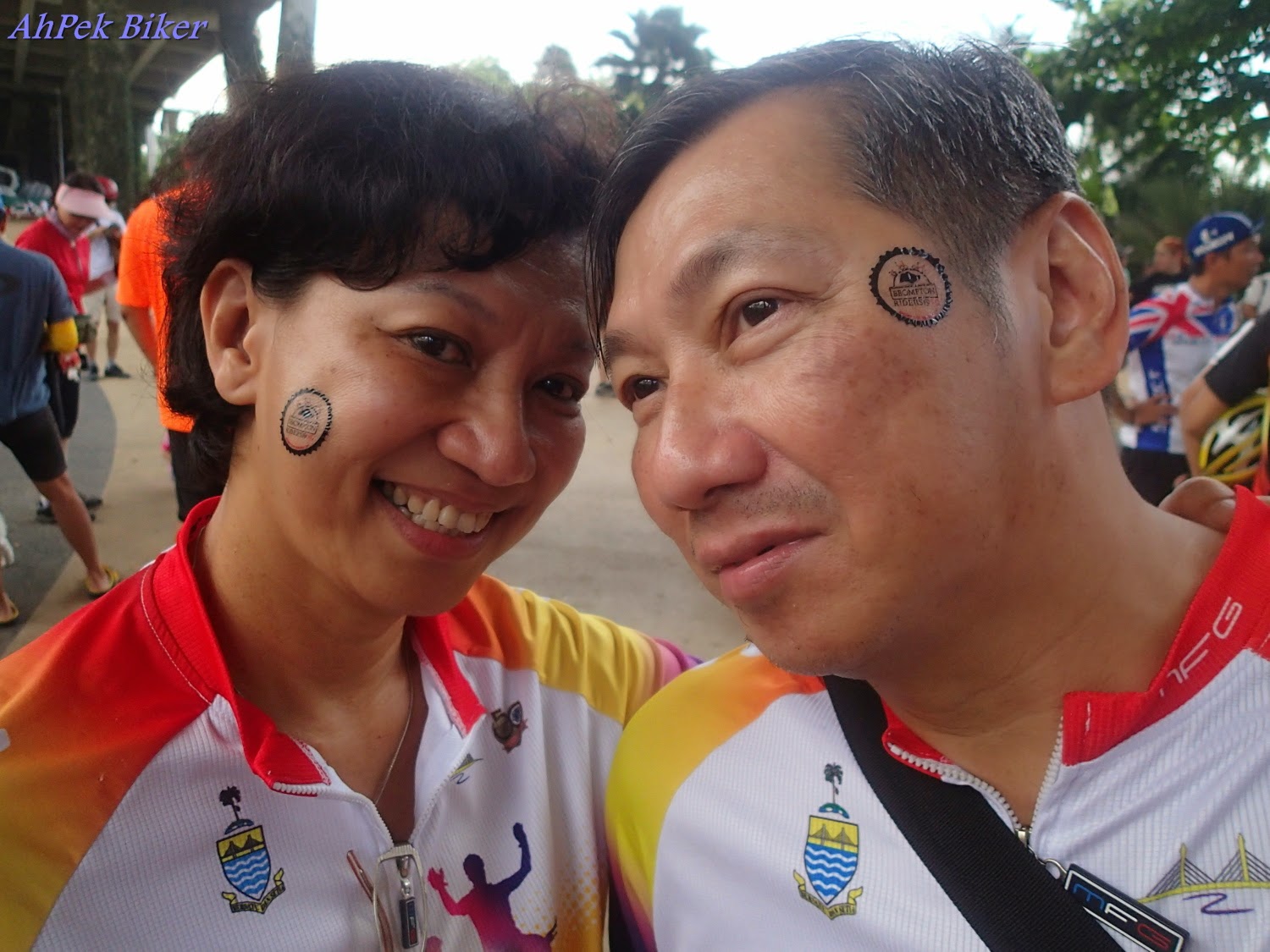 Participants mixed around casually with stick-on tattoos emblazoned onto their faces, hands, etc. Commemorative key chains were also handed out.

Then there were prizes galore.
Prizes were given for the racers, best dressed cyclist, best-coordinated cyclist and even a lucky draw with many prizes. The event was well sponsored by bike and accessories shops like Recycle, Bike48, etc. Oddly a major bike distributor was absent. 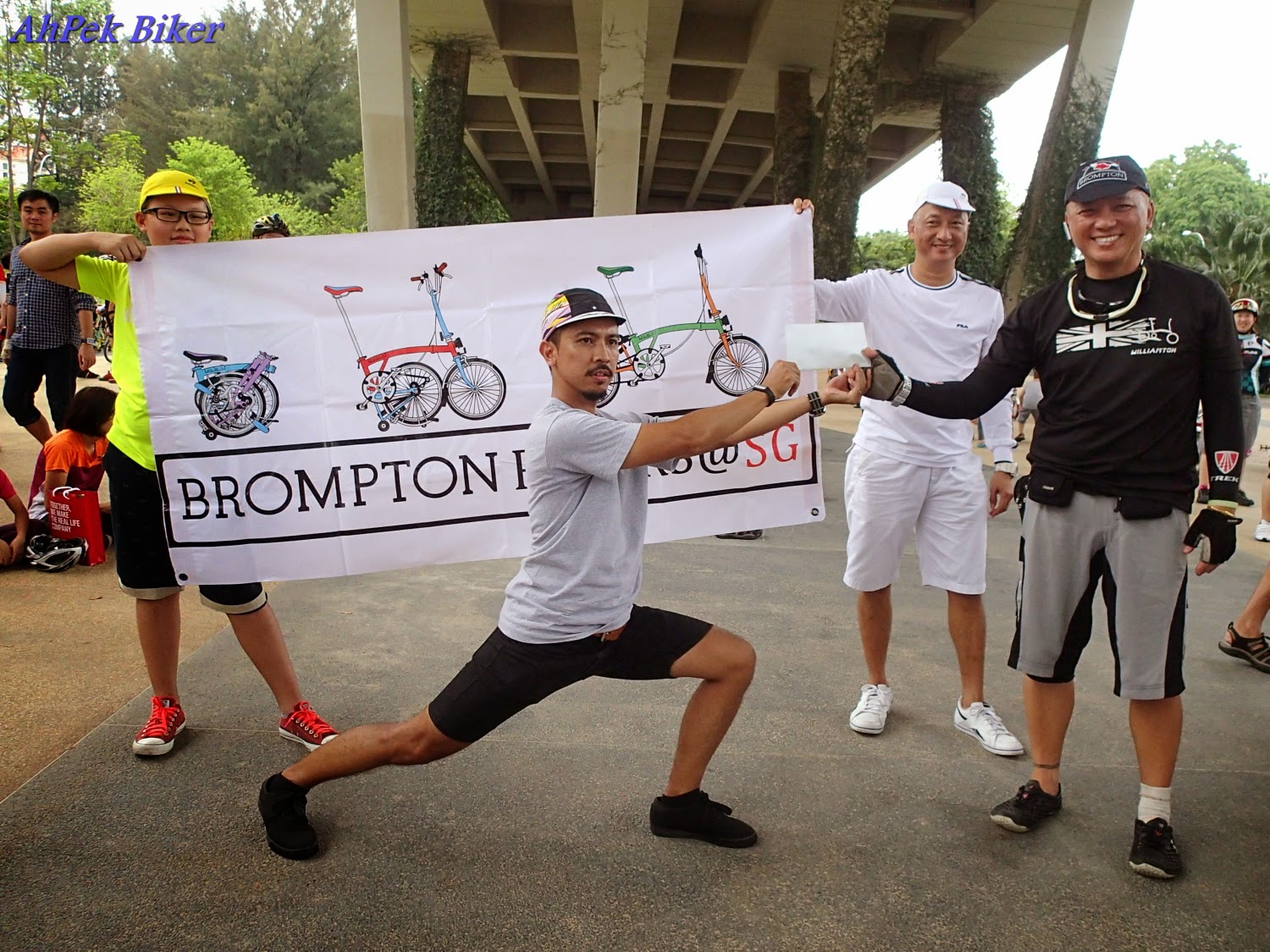 Perhaps this prize-winner's pose best signify the effort by the organizing committee to make the event a success. They really stretched it all out to get sponsors, set up the communication logistics, plan out locations, ride routes, provided ride marshals, etc. to make us all feel at home. They even came to meet out-of-town participants and ride-guided them to their hotels/hostels.

Many thanks to the organizing committee.
Well done! The event was a major success...
... perhaps 500 next year?