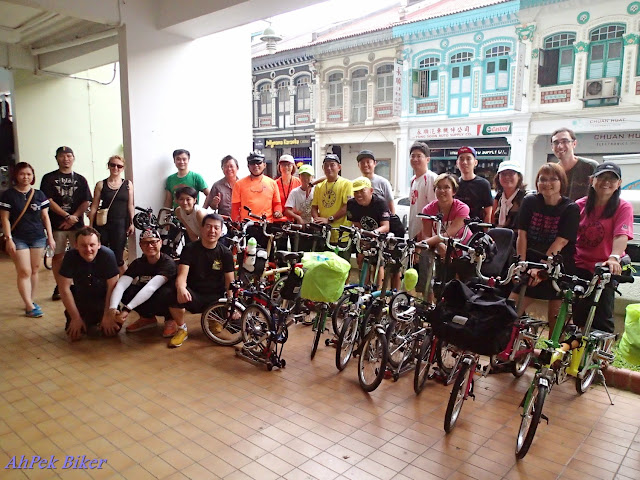 Singapore : 30th April 2015
Medium-size Group Event - Petaling Jaya to Singapore by coach and then a cycling mini-adventure around down-town Singapore City.
The bugle has sounded! A couple of months before a call has been made by Finty (of My Brompton Malaysia FB group) for us to go "Rolling Down South"; to bring our Bromptons down and join our Singapore compatriots for their 3rd Annual Singapore Brompton Day (... see blog).
I could only observe in envy as my friends prepared themselves to go on this unique trip down south. See, I was going overseas too but in the other direction - north to Taiwan. Then, just a few days before the Singapore event something cropped up and Taiwan was cancelled.
Hooray! It's down south for me too!
And a pleasant surprised awaited in Singapore, members of the Brompton Riders @ Singapore Group (BR@SG) met us at the bus station when we arrived, cycle-guided us to our hostel; and took us on a short tour of down-town Singapore after that. 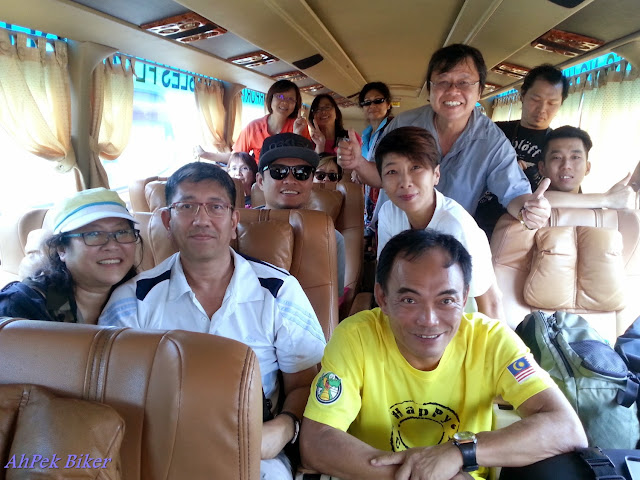 7:30am - Thirteen of met at 1-Utama's Transportation Hub to take the 8:00am Aeroline coach heading for Singapore. Others will be going down by train, some will drive and another couple will be flying down from Penang.
We all had different ways to pack and protect our bikes for this bus journey. Some had used the Ikea Dimpa bags, some just the Brompton Cover Bag and a few used hard cases. Aeroline has a policy of not allowing folding bikes as part of luggage; fortunately our group leader, Finty had called them up and had got the green light from them. Still, as the coach was a double decker and had a smaller cargo hold (when compared to single-decked buses) loading our bikes on board was a tight fit. Thankfully, we did not had to leave any of our bikes behind.... phew....

1:15pm - We were fortunate that the bus crossed into Singapore via the Second Link into Tuas. On a trip down to attend OCBC Cycle Singapore in 2013, the bus went via Johore Bahru into Woodlands. At the customs station in JB, we had to temporary disembark from the bus, carry our luggage and bikes up a flight of stairs, cross customs at the first floor and then down another flight of steps to get back to our bus on the other end.
Via the Second Link, at both the Malaysian customs in Gelang Patah and the Singapore one in Tuas, we still did have to unload our bikes and go through both customs, but it was all level through the ground floors. With my bike in the Brompton Cover Bag, it was easy wheeling through. 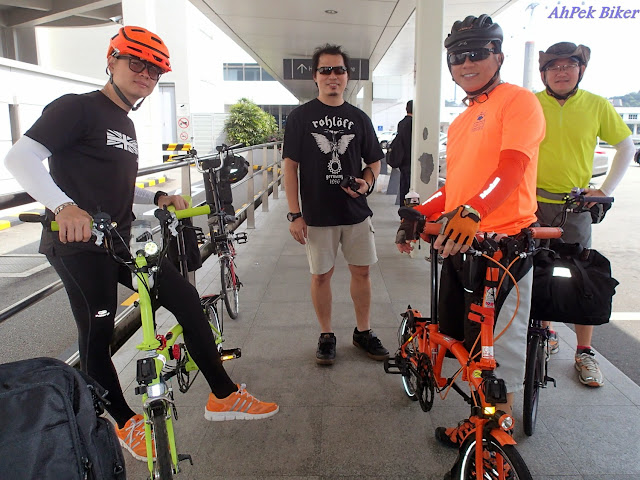 2:45pm - We arrived at the Harbour Front Centre bus terminal and were met by BR@SG's William, Greg and Des. They had cycled to meet us; and YES being avid cyclists we are going to ride the moment we landed (*smiles broadly*). 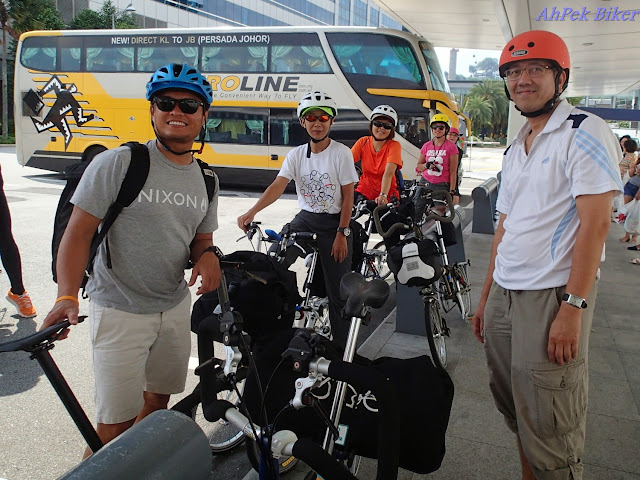 After that comfortable bus journey, it's time to wake up our itchy riding legs. We quickly unloaded and unfolded our bike:
LET'S RIDE!!

THE RIDE
Ride Route: Harbour Front Centre>Fivestones Hostel>Recycle Bicycle Shop>Rochor Canal>Marina Bay>Fivestones Hostel.
Route Recommendations:
1. If riding along the main roads, do be careful as traffic moves fast and may not give way. When crossing main roads, it's better to use the pedestrian crossing should traffic be too heavy.
2. Try to use the bike paths or pavements, many a times these are more interesting than riding along the main roads.
3. The following should not be missed:
-  "colonial" part of down-town Singapore. This area has many old colonieal pre-war houses that has bee restored or refurbished.
- Rochor Canal, it's a fairly new park connector route.
- the Marina Bay area, it's beautiful both day and night. 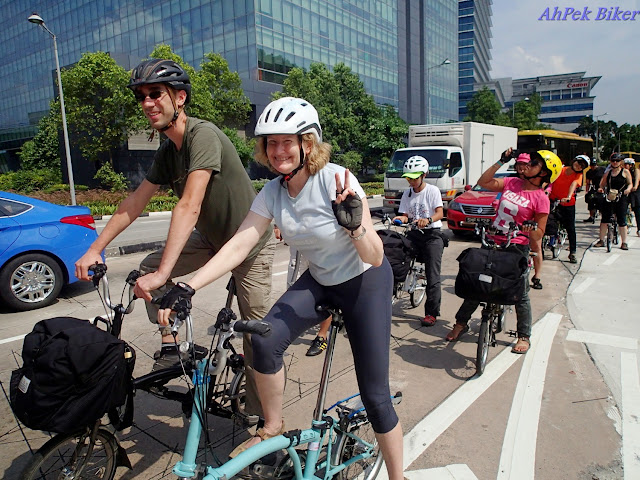 Joining us were some French and a Belgian, they were in Singapore to kick off their cycling adventure up to Malaysia and beyond. A couple of Australians and Thais also joined us; so it was in fact sort of an international ride. 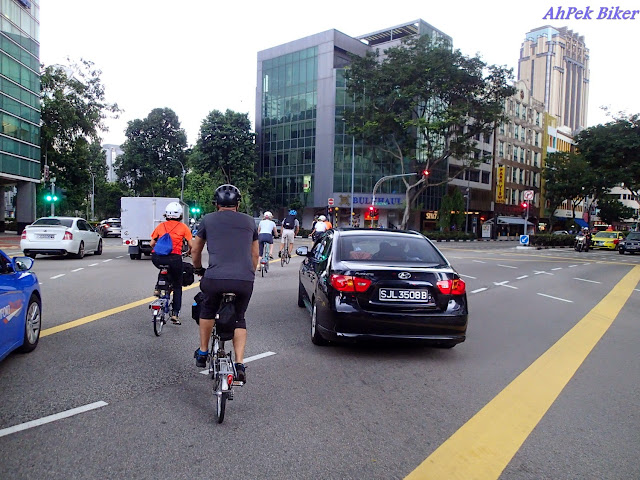 I hate to say this, but most Singapore drivers can be an impatient lot when it comes to giving way to cyclists. Often we were honked at (especially by the taxis) as we tried to swing right to cross busy roads to get to the other side.
We were glad that our BR@SG friends were at hand to cycle-guide us through these roads of down-town Singapore. They took us on a route that was like a maze - cutting through side & back lanes, up and down stairs, along pavements and through park connector paths - to avoid using busy roads as much as possible. 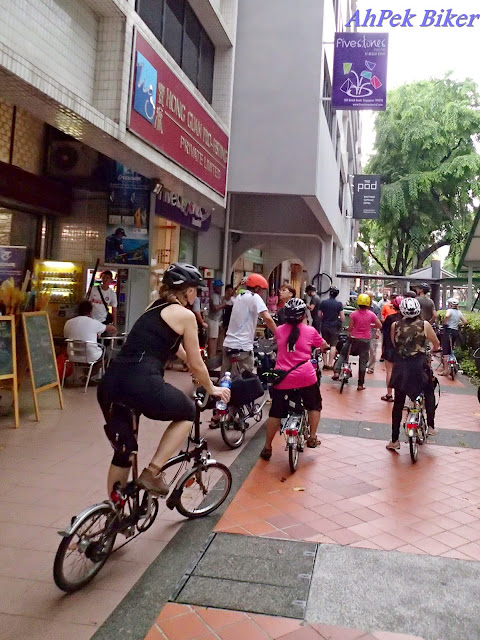 It was a mini-adventure and we all arrived safely at our destinations; the first one being the Fivestones Hostel at Beach Road where most of us will be staying.
Our BR@SG friends went to have coffee nearby while we checked in, changed and were ready to continue our cyclo-tour. Here we were joined by LK, another BR@SG member who is also a close friend. 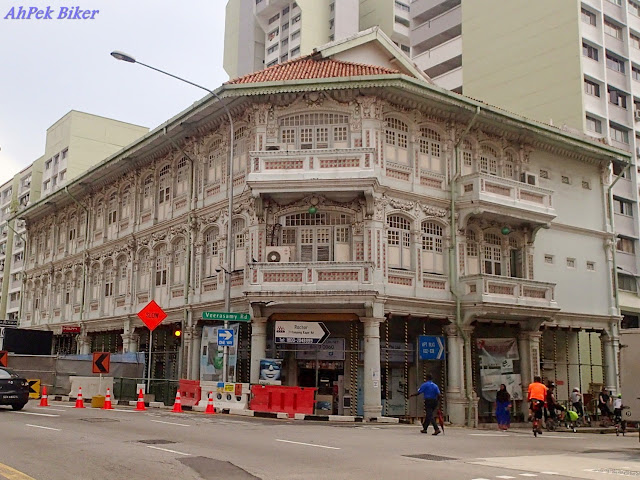 Heading off again, we were now riding along the narrower "colonial" streets. Like other cities, Singapore has recognised it's past and many of the pre-war buildings like the one above has been restored to their pristine condition. 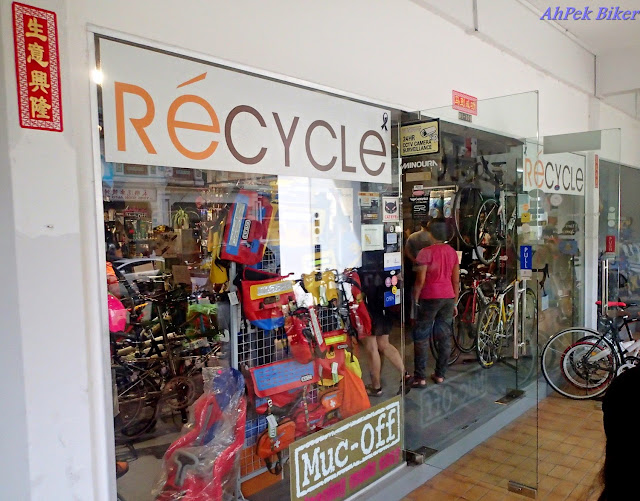 The next destination was the Recycle bicycle shop nearby. Here the sell bicycles and more importantly accessories for the Brompton. We shopped around, they do have many interesting accessories not available in Malaysia.
Recycle was also one of the sponsors for Singapore Brompton Day.

After that we continued our ride, some highlights along the route: 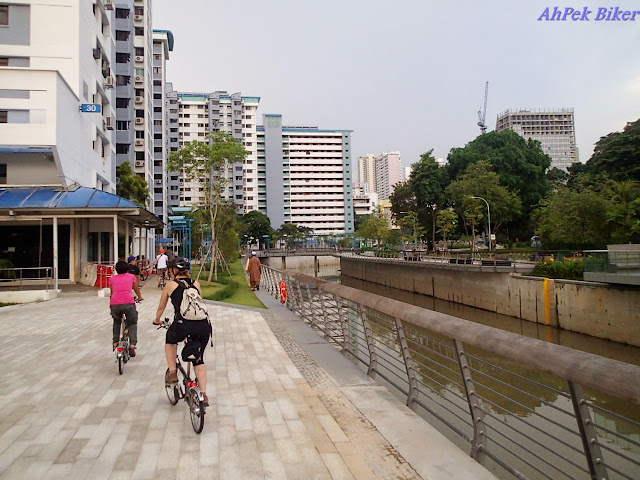 Along the new park connector running beside the Rochor Canal. 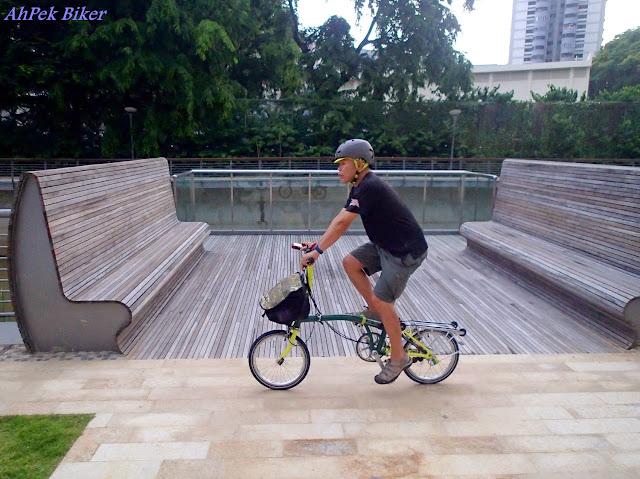 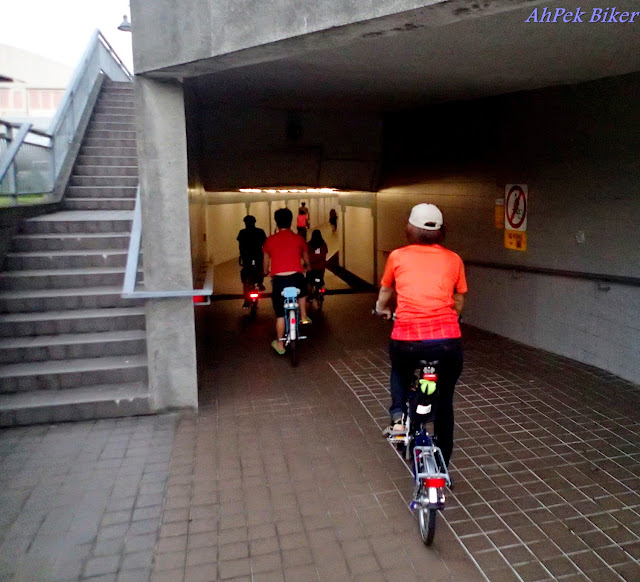 Then it was into tunnels... and when we exited a grand sight awaited us ... 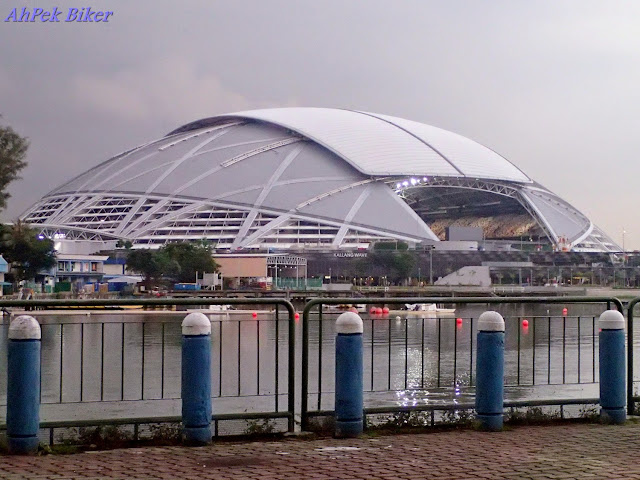 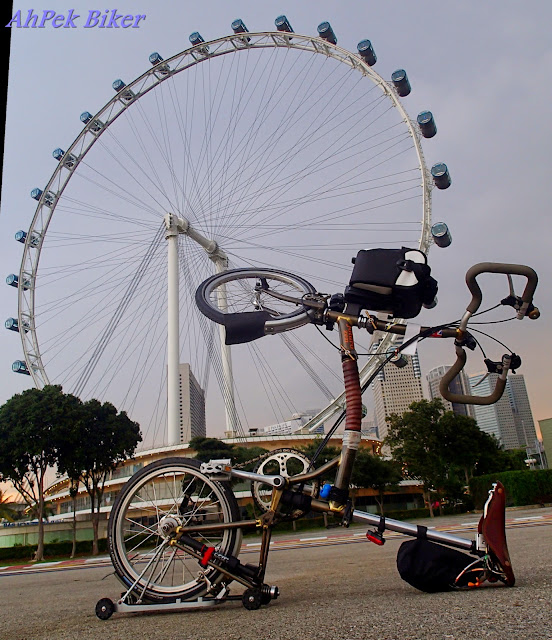 Goofy, my Brompton goofing at the Singapore Flyer. 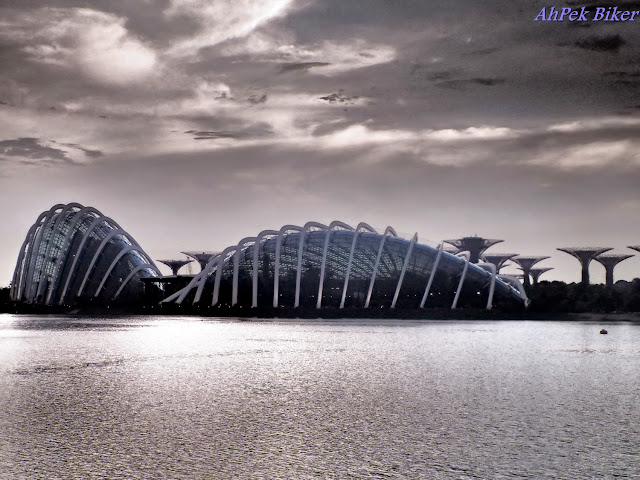 Across the bay, the Flower Dome looked like the humps of an ultra-modern sea serpent moving lithely over the water. 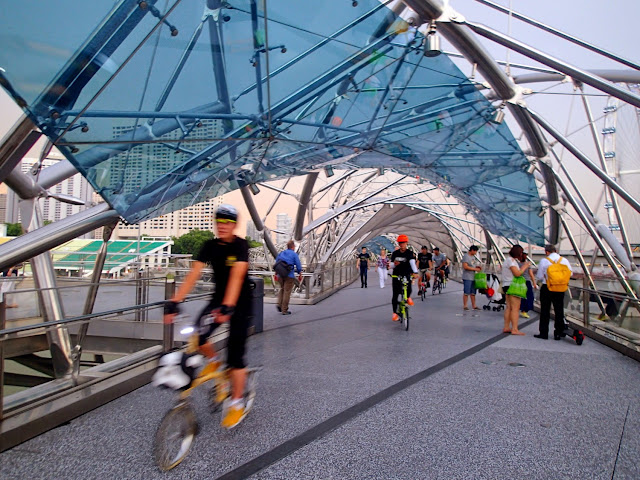 Crossing over the Singapore River to get over to the other side was via the Helix Bridge; another dynamic architectural structure. 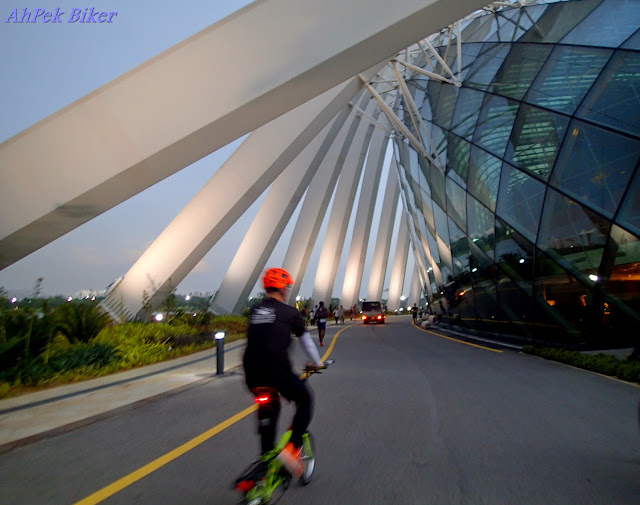 Cycling below the ramping columns of the Flower Dome. I never tire of cycling here at Marina Bay; the place is so beautiful. The buildings although static evoke a sense of dynamism. 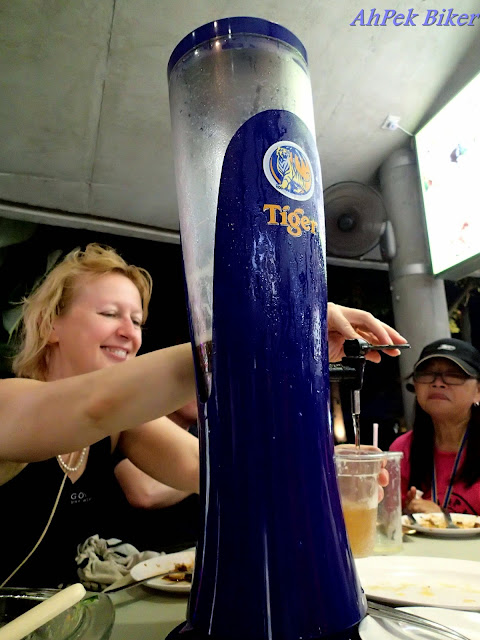 6:30pm - Dinner at Satay at the Bay was finished off with some beer. A thought did occur to me; here we are drinking Tiger Beer in Singapore the Lion City; two awesome cats! 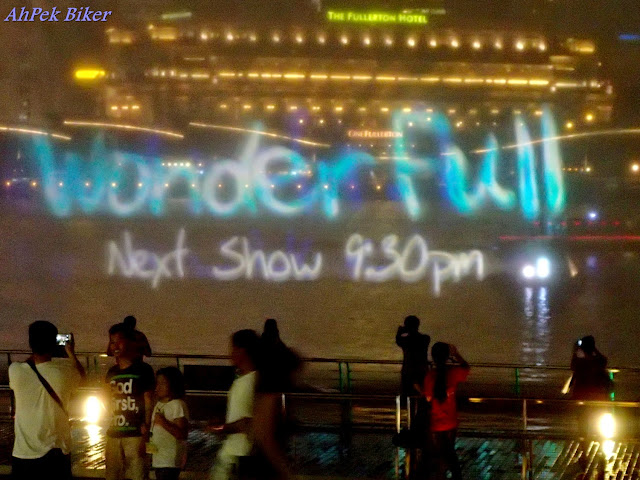 After dinner we rode passed the Shoppes @ Marina Bay Sands; in front of this promenade every night the Wonder Full show awes audience. It was 8:15pm and the next show was more than an hour's wait, we had had a long day and decided not to wait (for show times clicked here, admission is free). 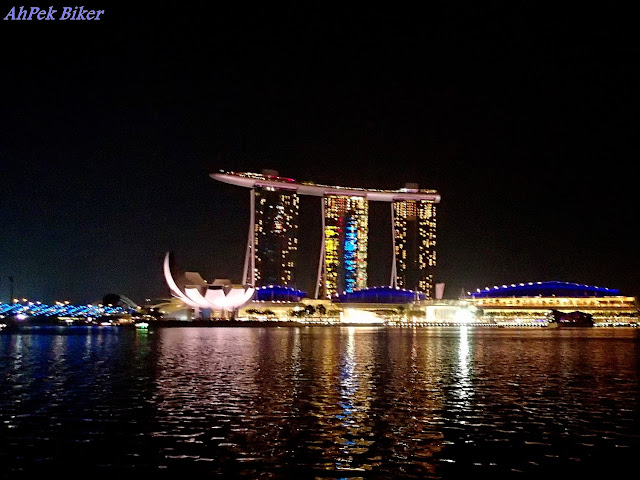 From Fullerton Road, the Skypark looked like a space-ship hovering and approaching to land. The blue spiral lights on the left is the Helix Bridge. 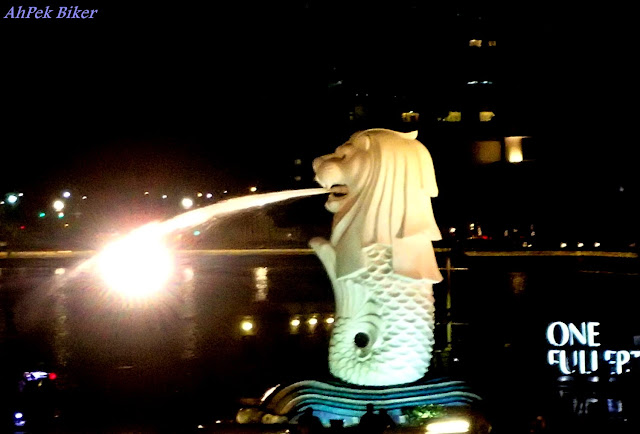 A quick look at the famed Merlion before we head back. 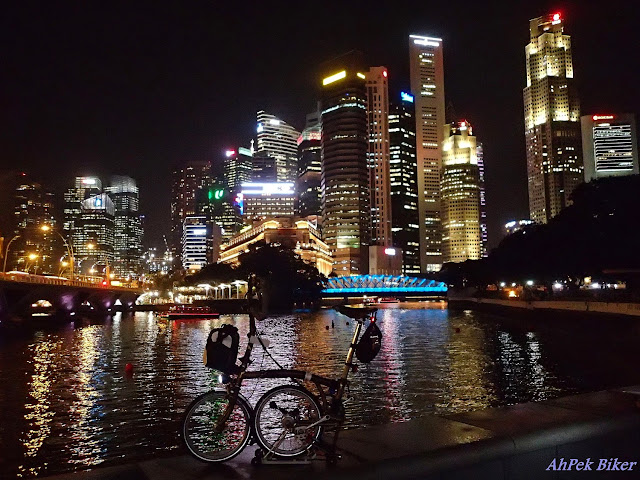 Many thanks to William Greg, Des & LK for a good guided tour of your city.
Goodnight from me & Goofy; it's going to be an exciting day tomorrow.