Penang : A Ride To Sea's End

Route Recommendations :
1. The seaside route along the Tun Dr. Lim Chong Expressway is scenic and it offers a view of both the Penang Bridges.
2. If Penang food is cheap, Gertak Sanggul food is even cheaper.
3. The road from Teluk Kumbar to Sea's End is shady and cooling.
4. Do not miss the jetty at Sea's End, it provides a good view of the sampans of the nearby fishing village and also a peek of Pulau Kendi. 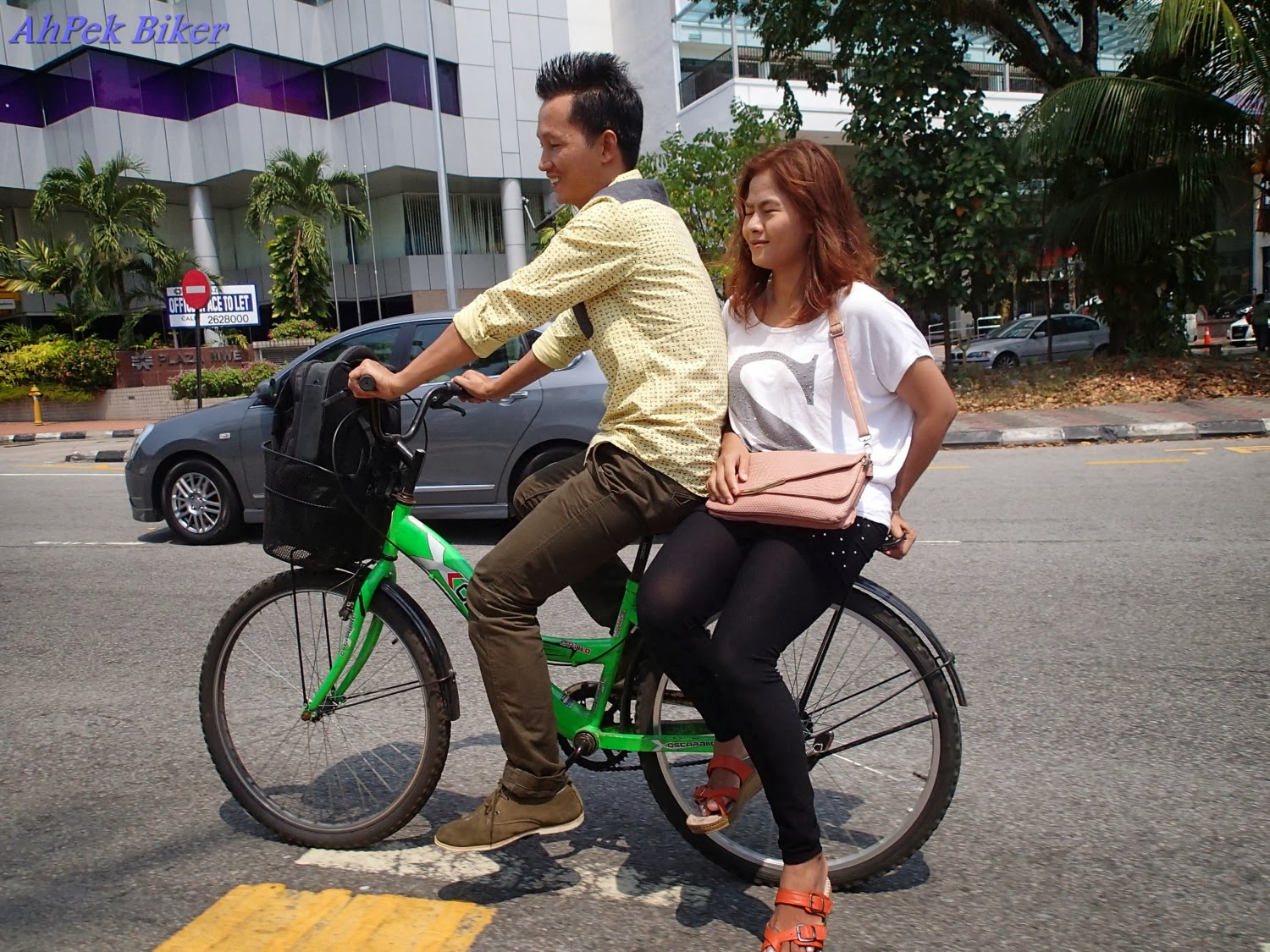 I am on my regular trip up to Penang Island, where I ride frequently with my friends there. However, this time I am even more eager to ride with them; as this time we will be riding to another part of the island - the rustic village of Gertak Sanggul an out of the way place which is hardly touched by tourists. I again contacted my friend Winson (... of the Turn The Wheels blogs) to help organize a ride to this rustic place.
On reaching Penang, I rode over to Penang Road to a coffee-shop called Kek Seng Cafe. En-route I saw a couple of bicycles with pillion riders on their cushioned back carriers. This set me wondering whether these are bicycle taxis as nearby is main bus terminal which is adjacent to the ferry terminal. Perhaps, I should check this out the next time I am up here. 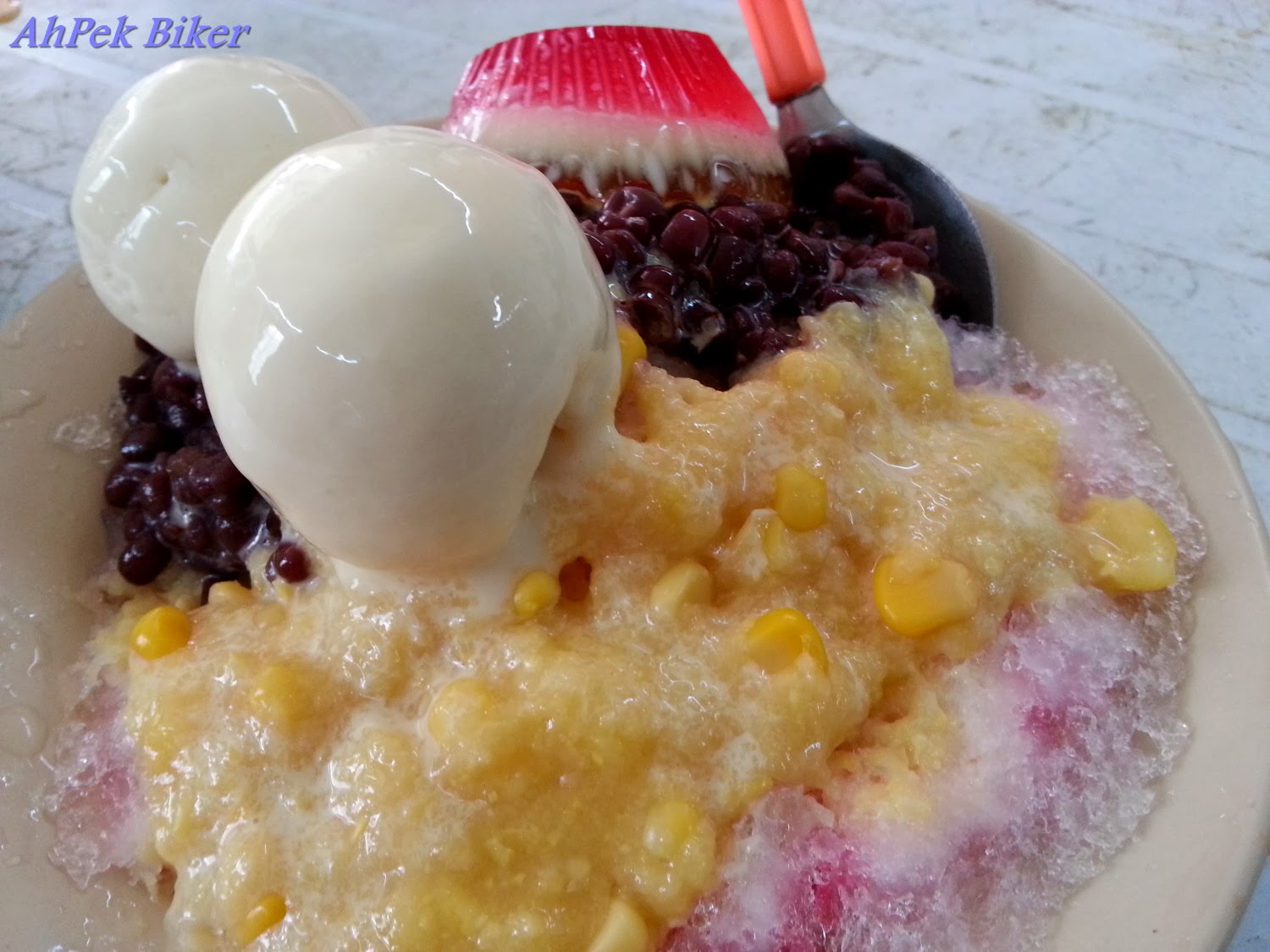 Kek Seng is well known for their ice-kacang, which they have been selling for decades. When I was a young little puppy, I have had heard my grand-father and father sing praises of this ice-kacang. And in my many years in Penang, I had never tried it before; so here I am now, ready to dig in and see how good it is.
It came with plenty of red beans, creamy corn and was topped with a red jelly and two scoops of durian ice-cream. It was fairly good but frankly I have tasted much better. At RM4-80 it did not give me value for my money. Sorry, Grand-pop and Dad; many new stalls have come up with better ones than Kek Seng's since your time. 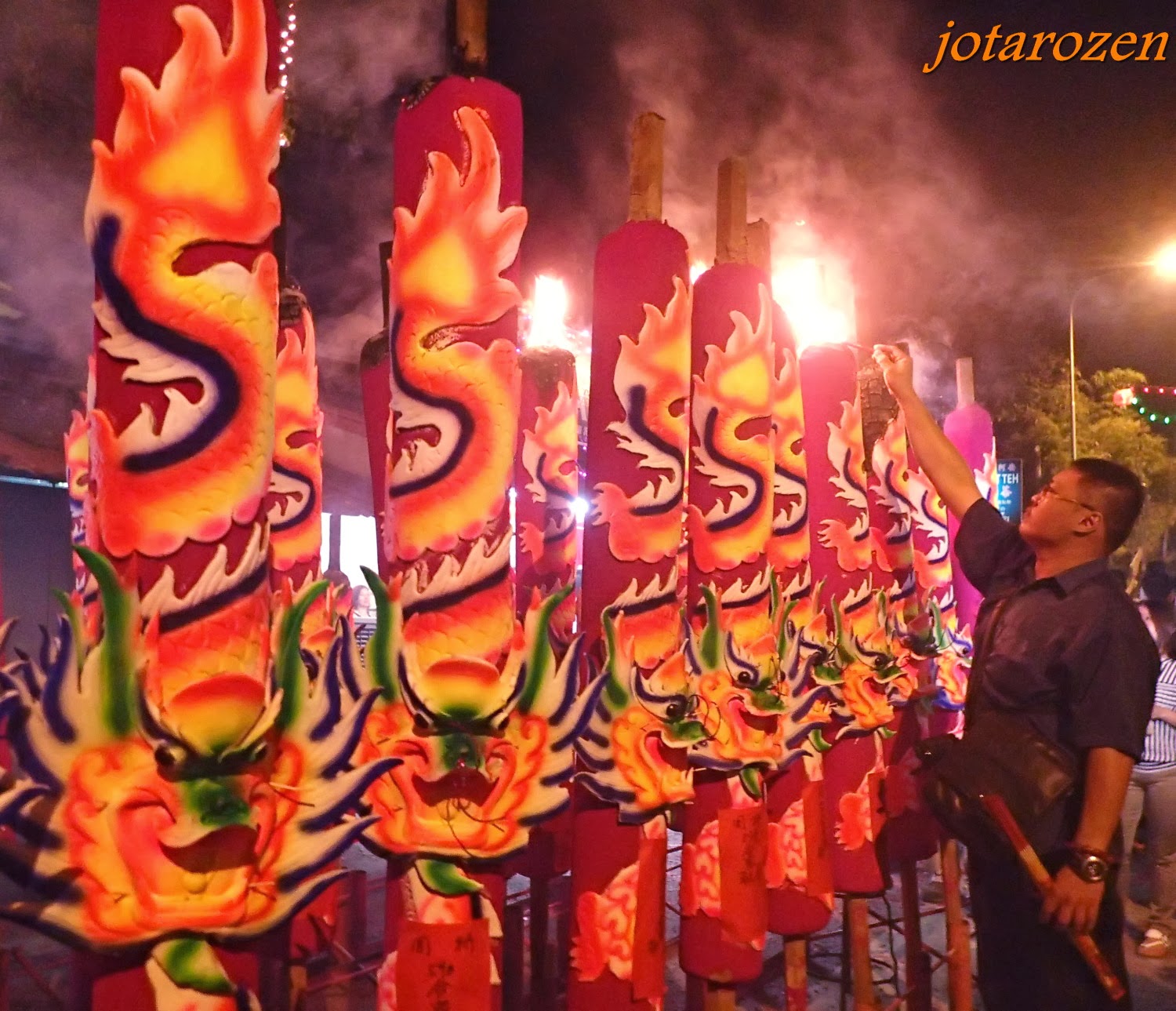 Winson had planned the ride for a Saturday morning. But then the night before was the ninth day of the Chinese New Year, a big day for the Hokkeins of Penang who will be celebrating the eve of the birthday of the Jade Emperor God in a very major way. Celebrations go on into the wee hours of the morning. So the ride was post-phoned to Sunday.
I took this opportunity to go down to Weld Quay to celebrate this colourful and boisterous feast with my friends (... see Jade Emperor God Festival blog). 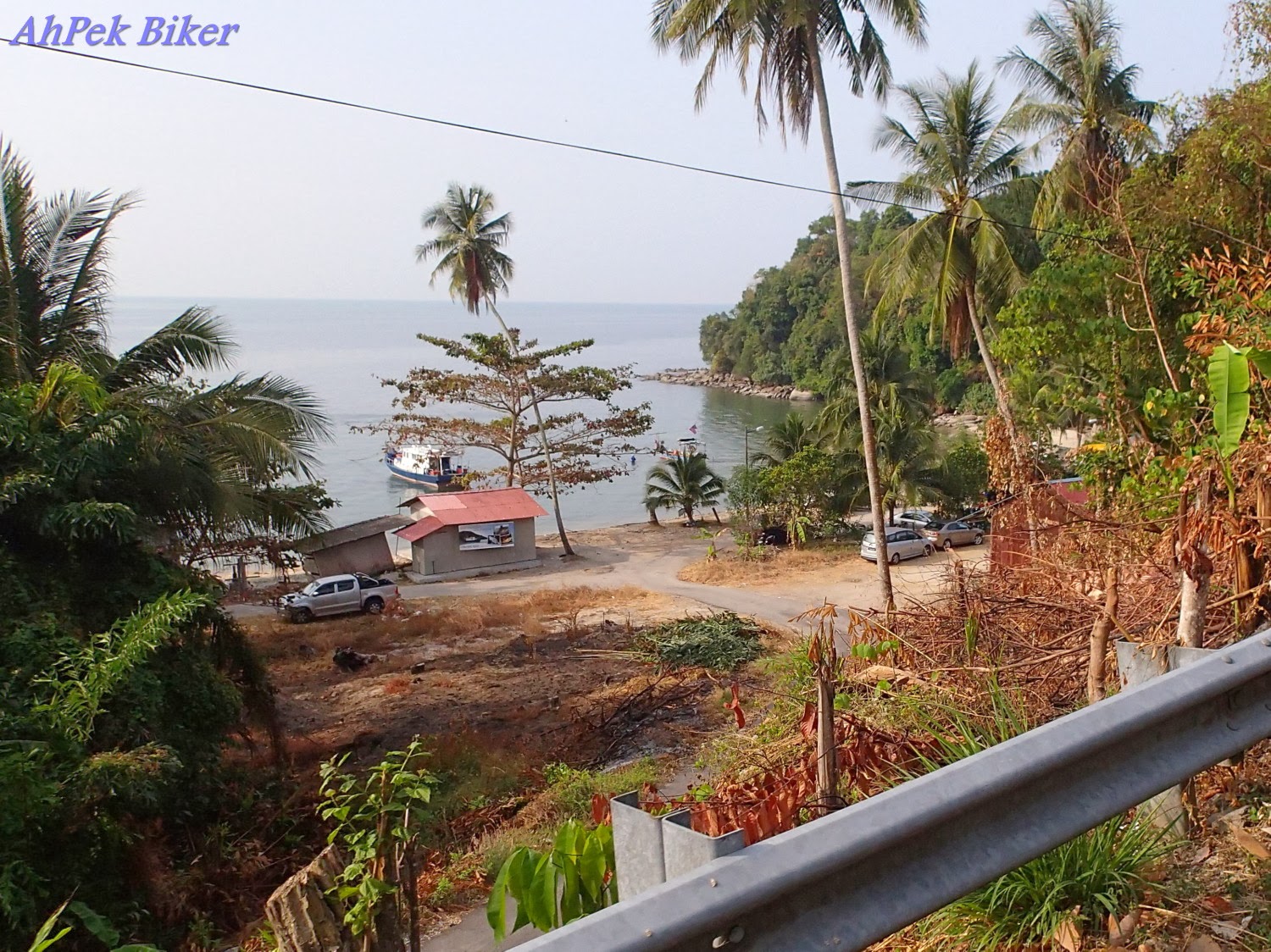 Why call this "A Ride To Sea's End"? The small town Gertak Sanggul in the local Penang Hokkein dialect is called "Boey Orh". We will ride further beyond the village, almost to the south-western tip of Penang Island. Over there is a seafood restaurant called "Hai Boey" which translated means Sea's End.

Ride route - Queensbay>Bayan Lepas>Gertak Sanggul>Sea's End>Bayan Lepas>Ideal Bicycle Park>Queensbay.
Starting from Gold Coast Condominium we will head towards Sea's End via Bayan Lepas, Batu Maung & Teluk Kumbar. Our return trip will have us pass by the Ideal Bicycle Park, a place that should be interesting for cyclists! 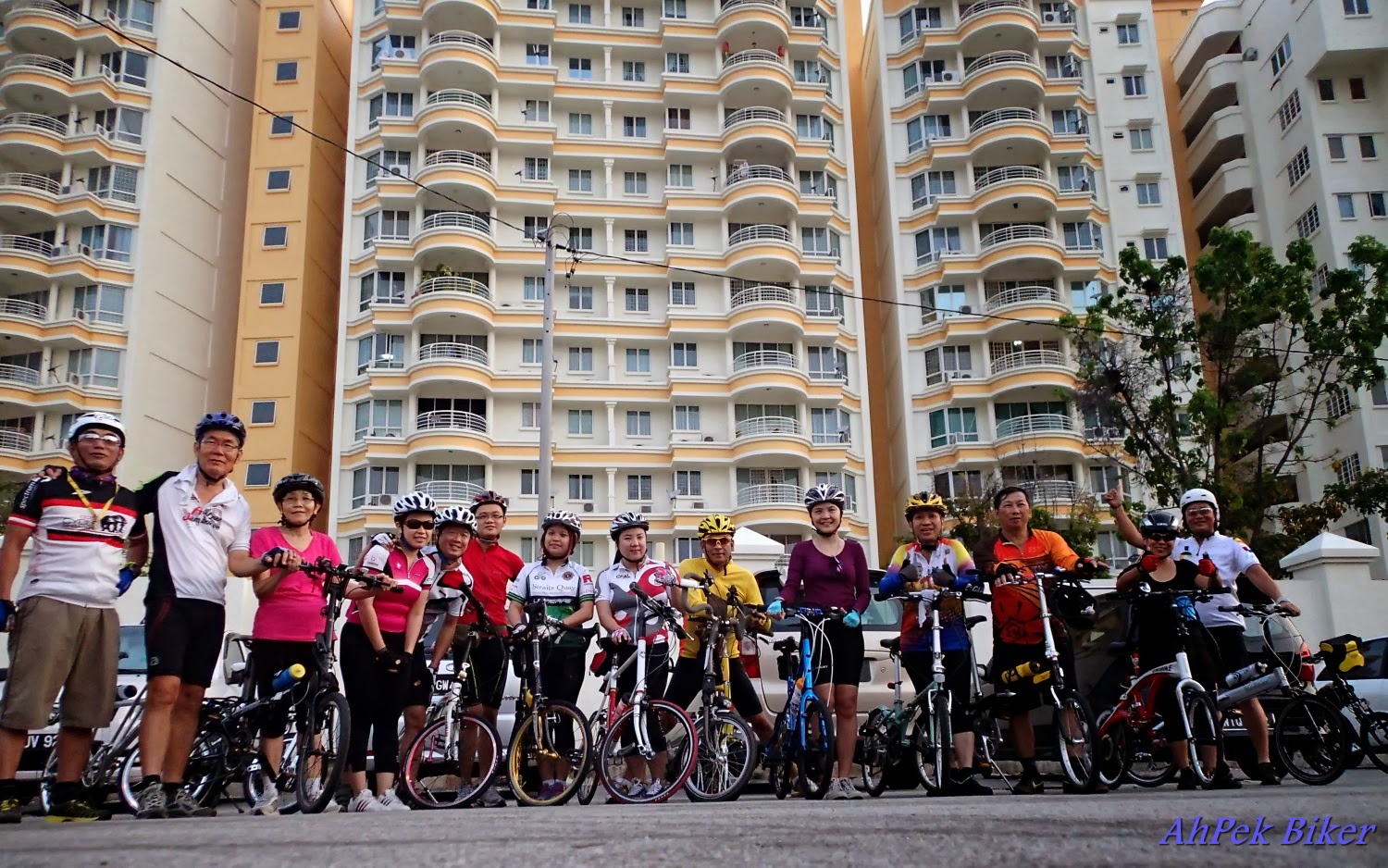 The turn out was quite impressive. All in there were thirteen of us, including the three of us up from Kuala Lumpur (Norman, Carina & me). Guan Hin and his wife joined us just for this group photo in front of Gold Coast Condominium, our start point. The two of them had just completed a very early morning cycling loop. 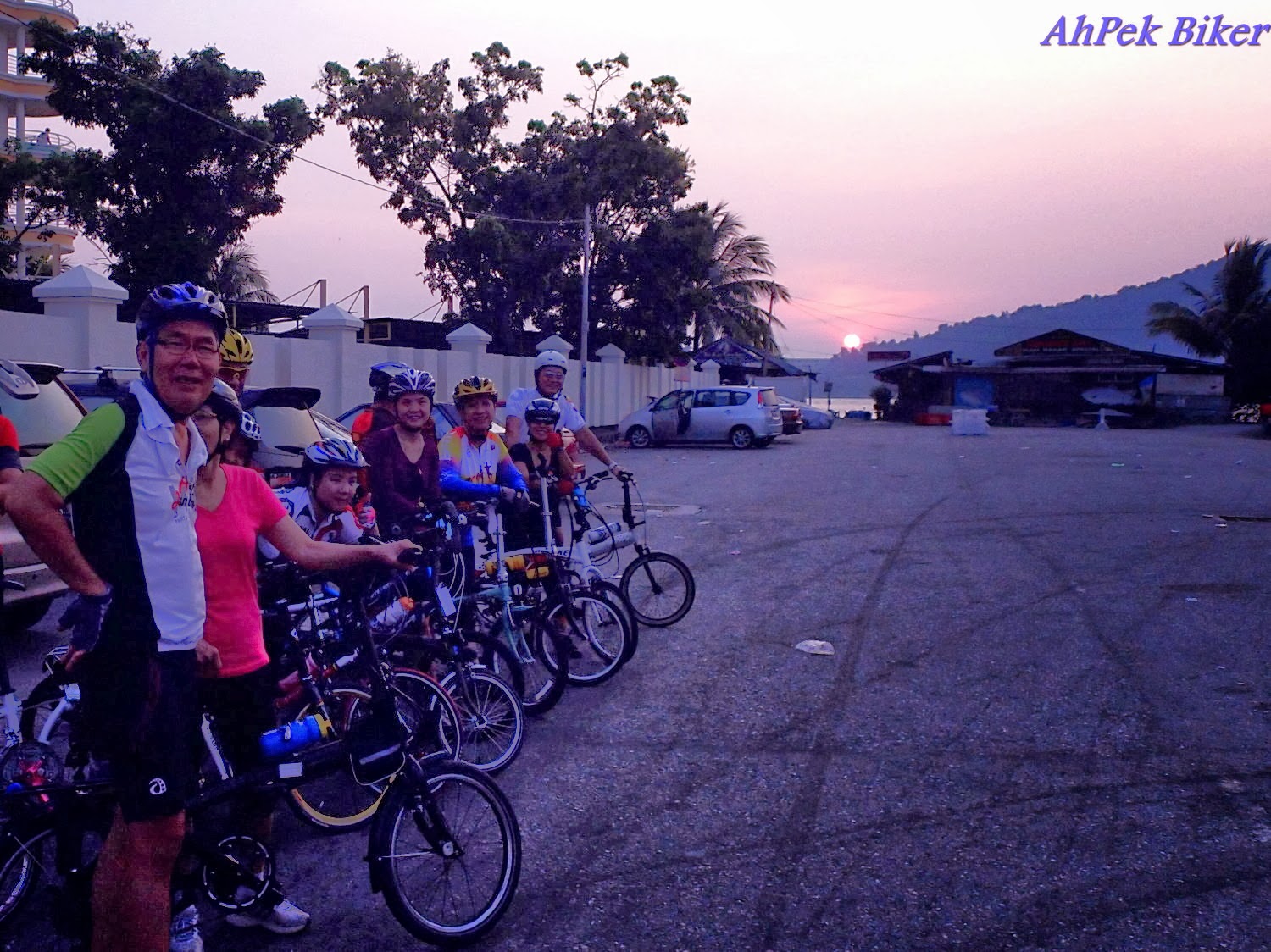 In the reddish glow of a early morning sunrise, we rode off. It will be a beautiful day to ride! 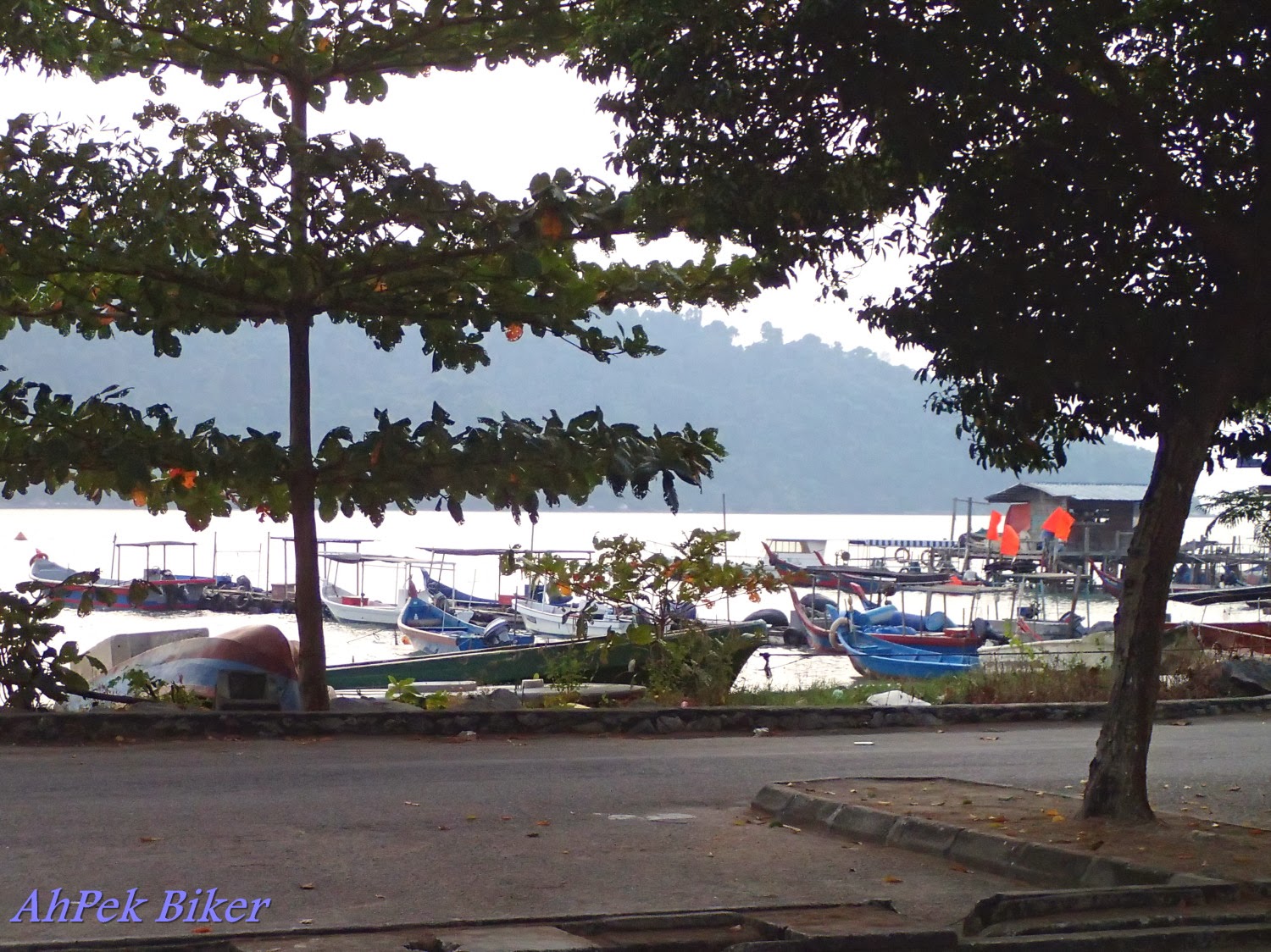 The stretch along the Tun Dr. Lim Chong Expressway leading up to Bayan Lepas was beautiful indeed. At certain stretches sampans fishing boats were seen idly rocking in the sea.

We reached the intersection leading up to the 2nd Penang Bridge. The 24 km. bridge was still not opened to the public, but we took a short one kilometre ride in and Norman took this photo of us with a beautiful sunrise in the background. 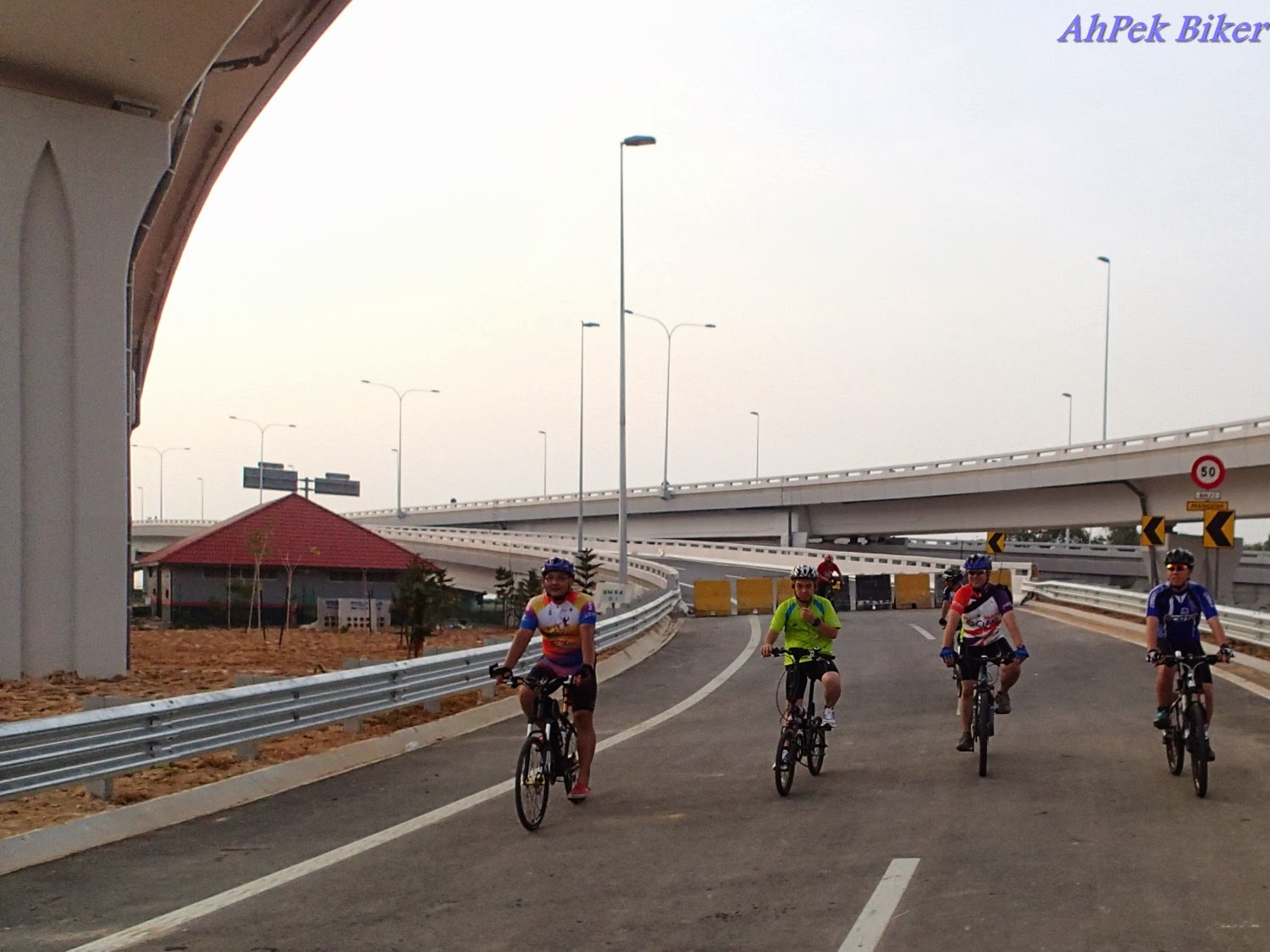 As we left the bridge, we met this "four musketeers" cycling down. It's Kai Cheong and his friends; a friendly bunch whom we will meet later again at Gertak Sanggul while having breakfast. 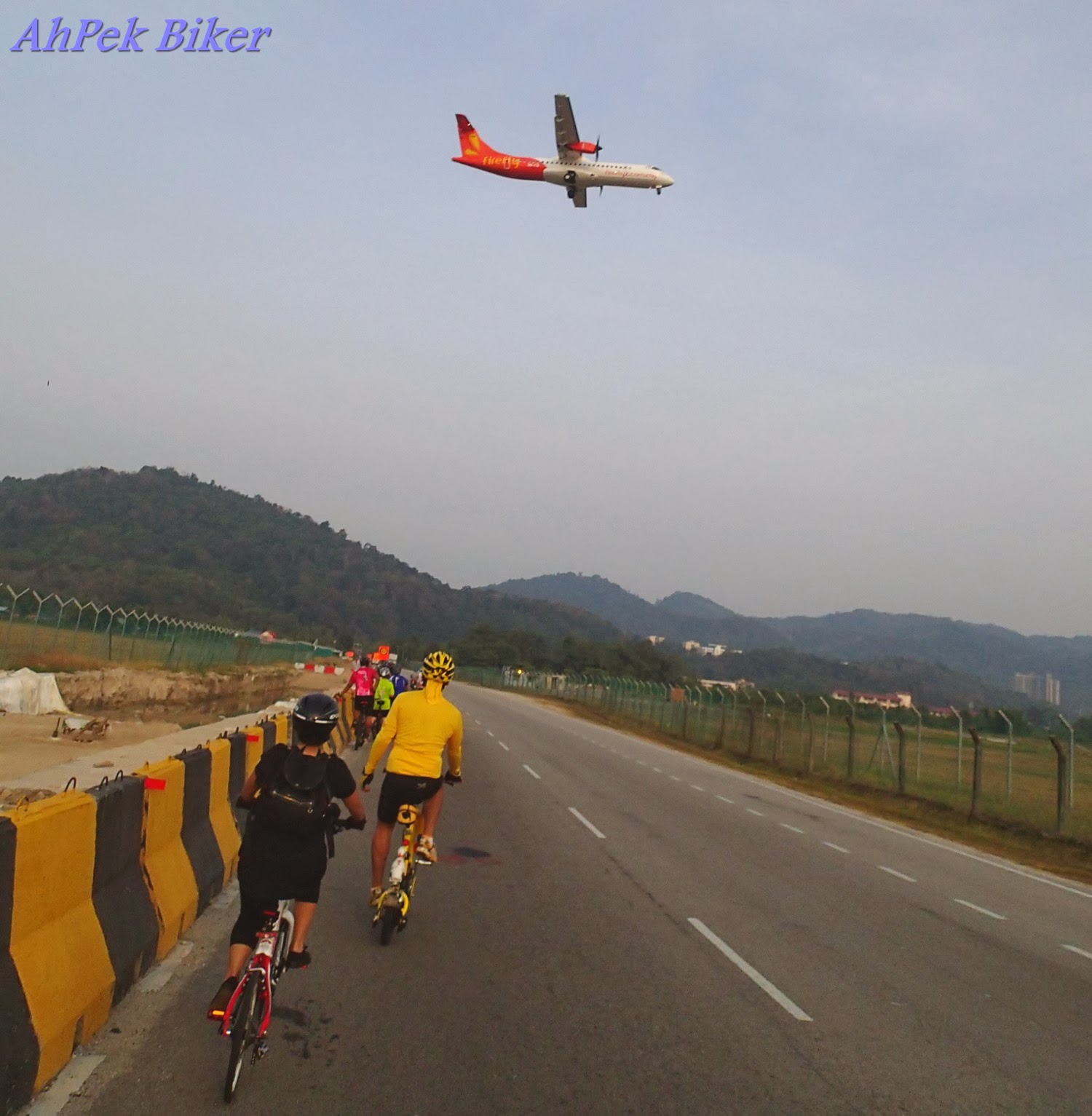 Riding by the front end of the Bayan Lepas Airport runway, I managed to grab this photo of a Firefly plane flying over us as it made its landing. 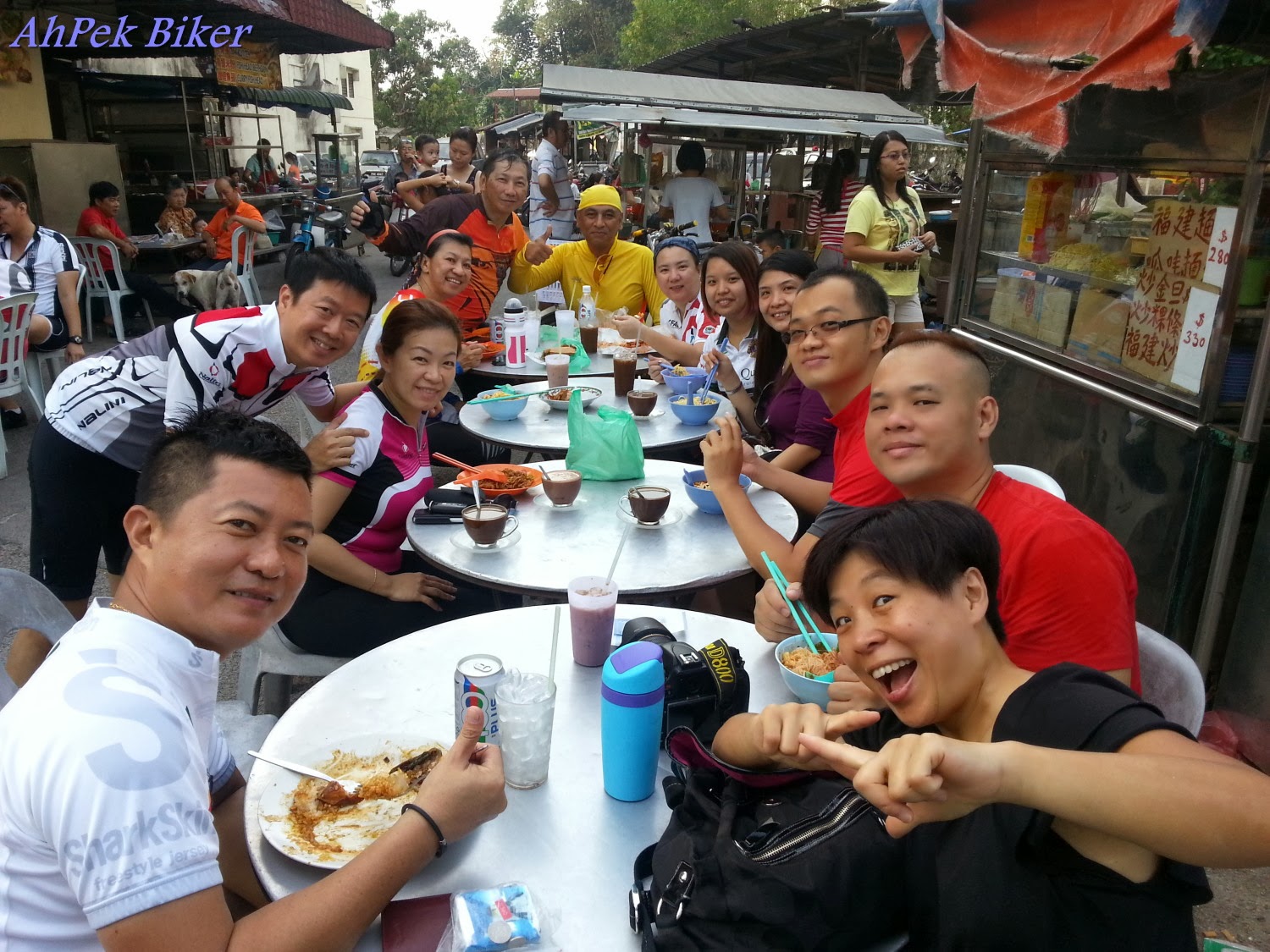 After one and a half hours of cycling, here we are, happily having our breakfast at Chin Teik Hin Coffee-shop in Gertak Sanggul. 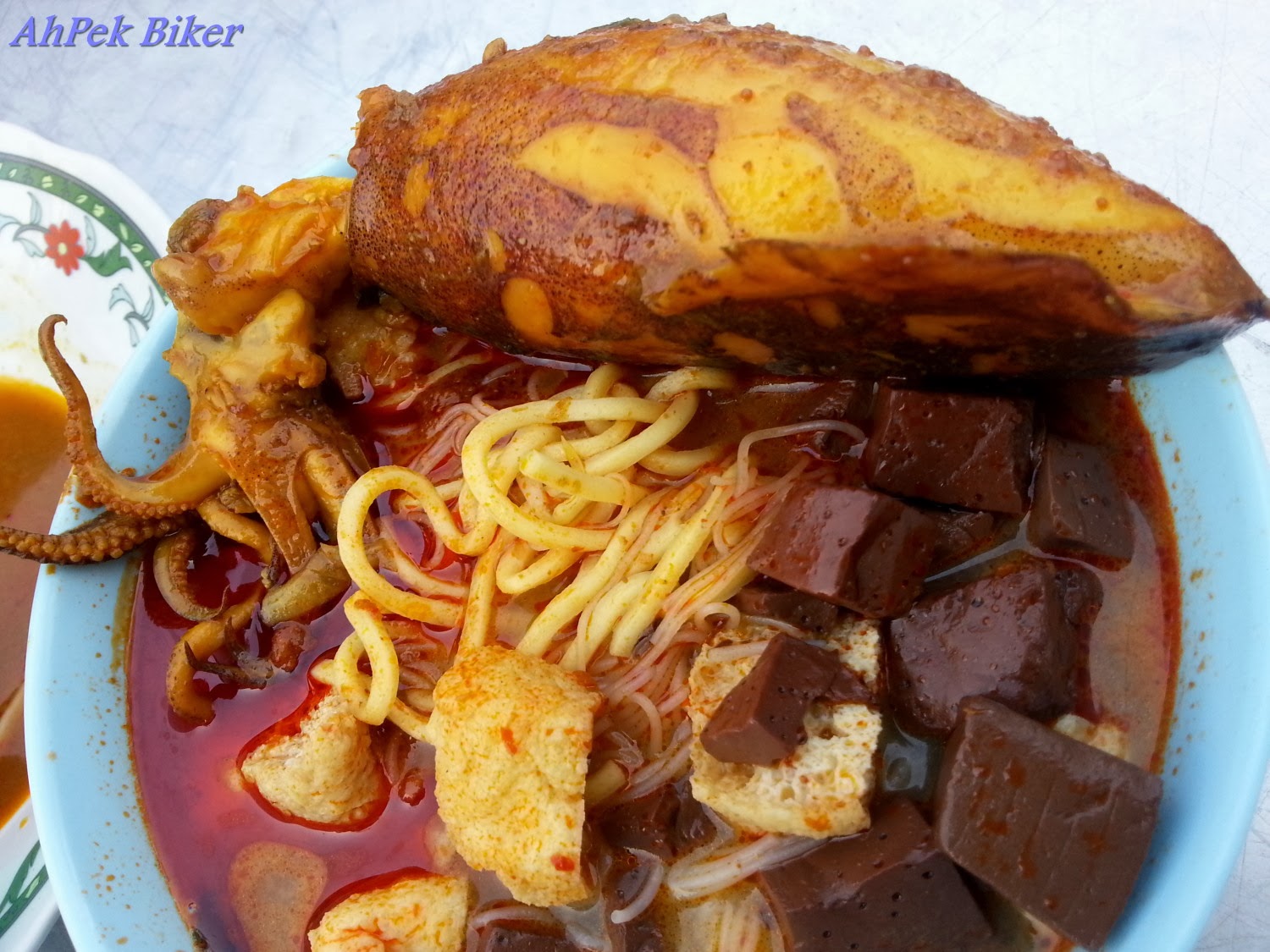 I had this curry noodles with coagulated pig's blood and an extra large curried squid.
Penang is a food haven, food in the city is good and cheap. Up here at an extreme corner of the island, it is even cheaper. The bowl of noodles cost me RM2-50 and the super large squid an additional RM4-00 only! 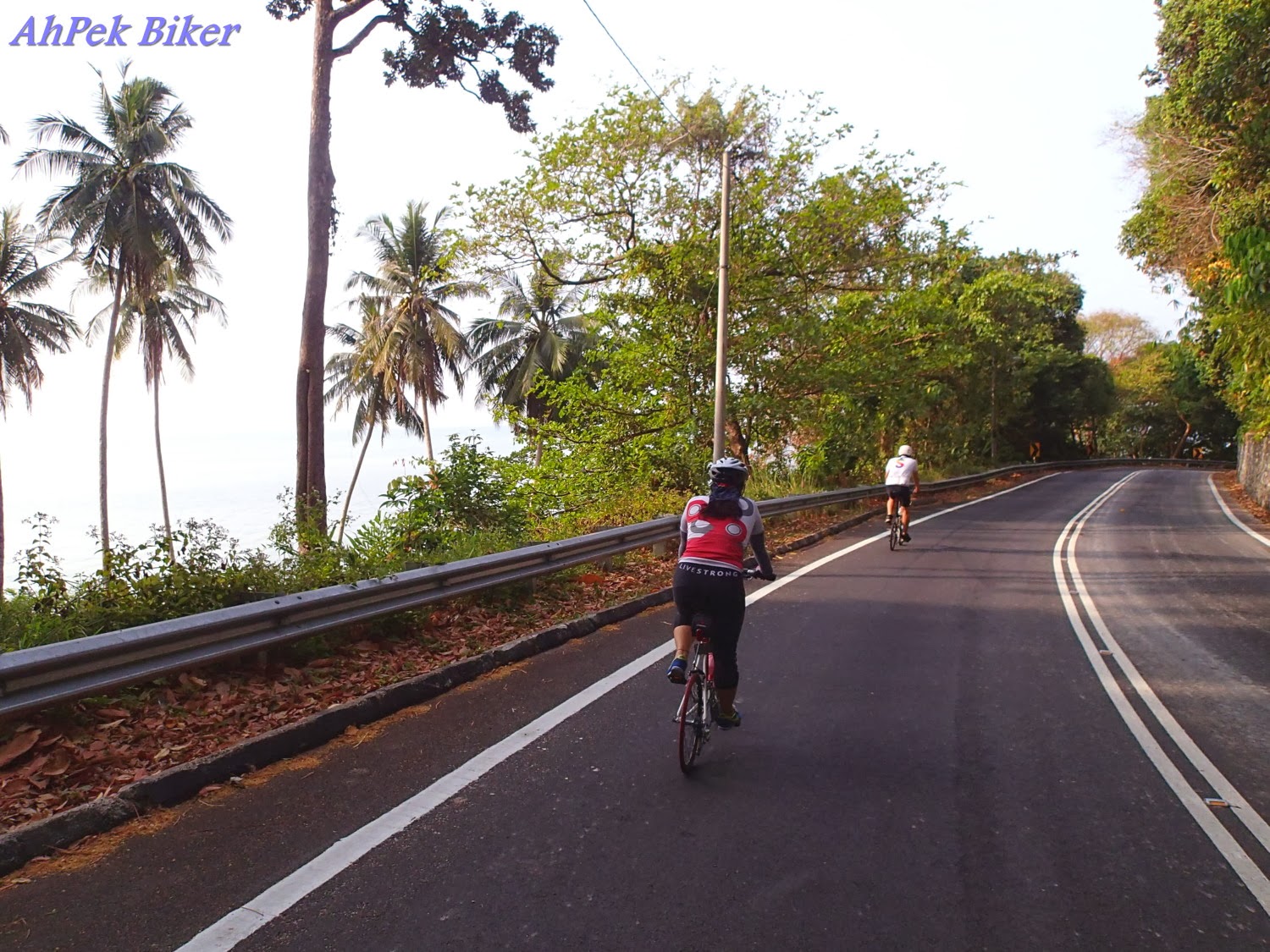 Beyond this point, the roads are enjoyable to ride on. It's shady with gentle slopes and almost devoid of traffic. To top it all, a gentle sea breeze was blowing onto our faces as we rode on. Nice! 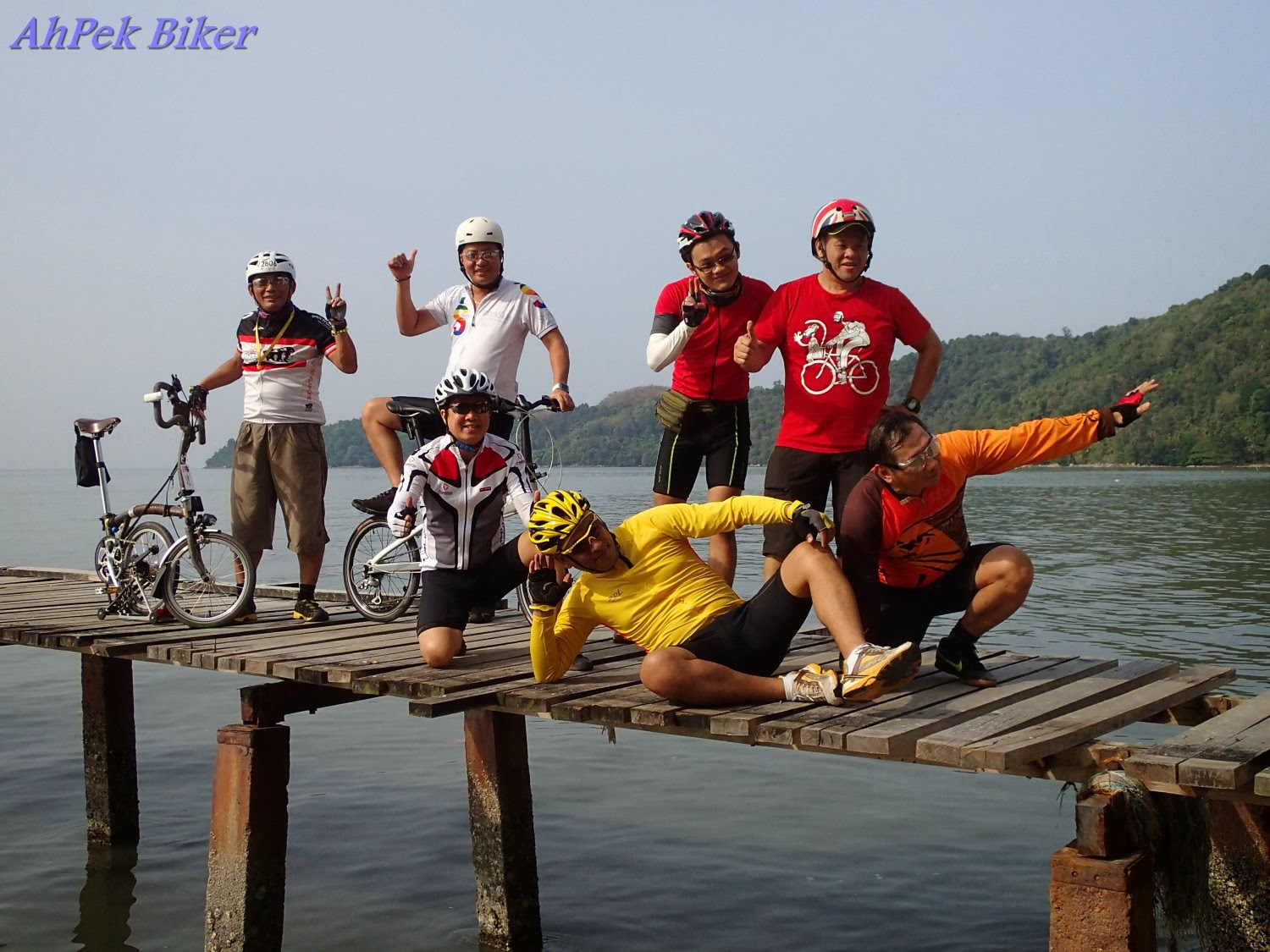 The road from Gertak Sanggul is a dead end. Almost at the end of the road (beyond the Hai Boey Restaurant) is a narrow jetty that sticks out into the sea. This is a good place for some photos, one of us guys relaxing in the pix above..... 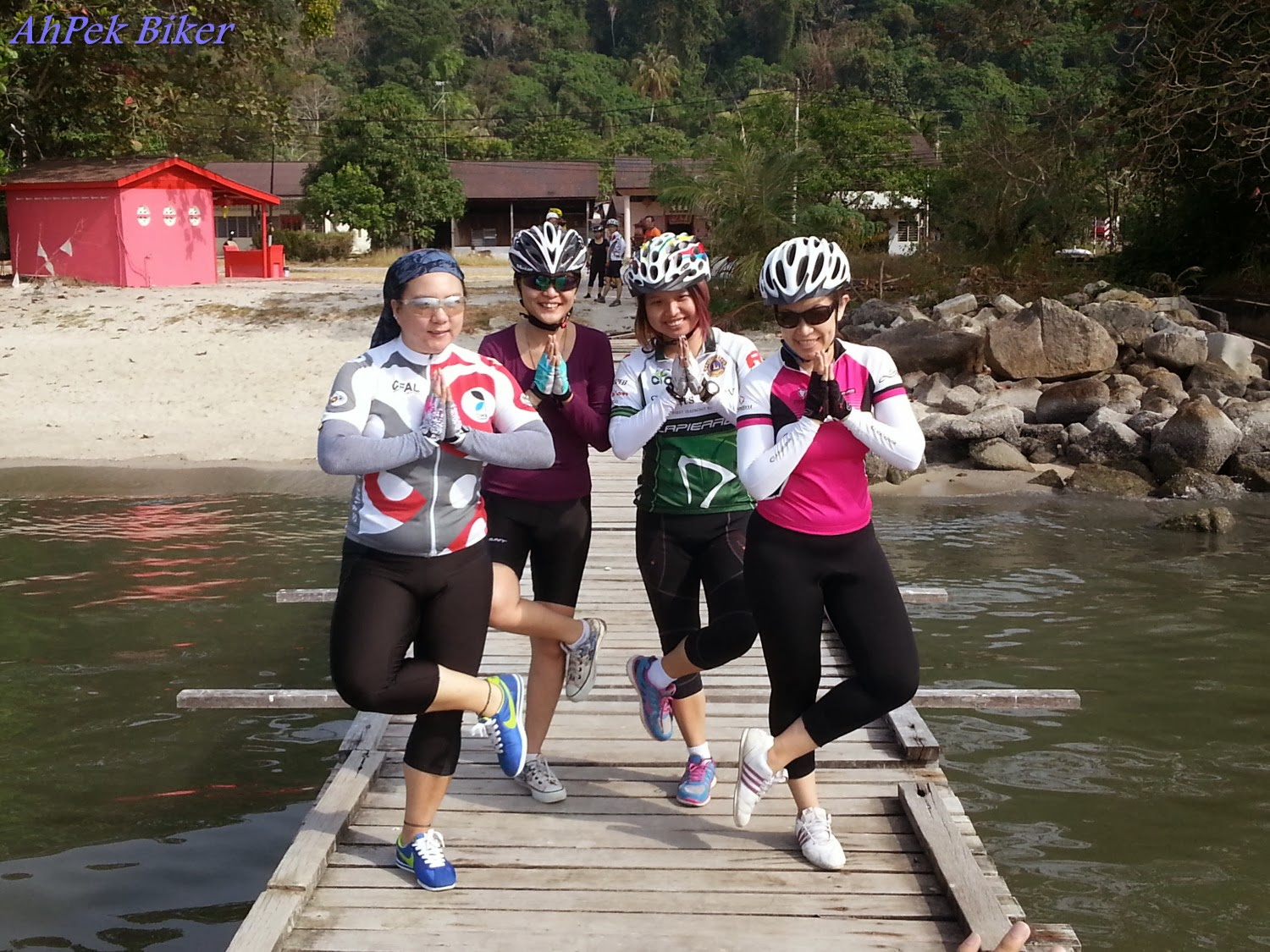 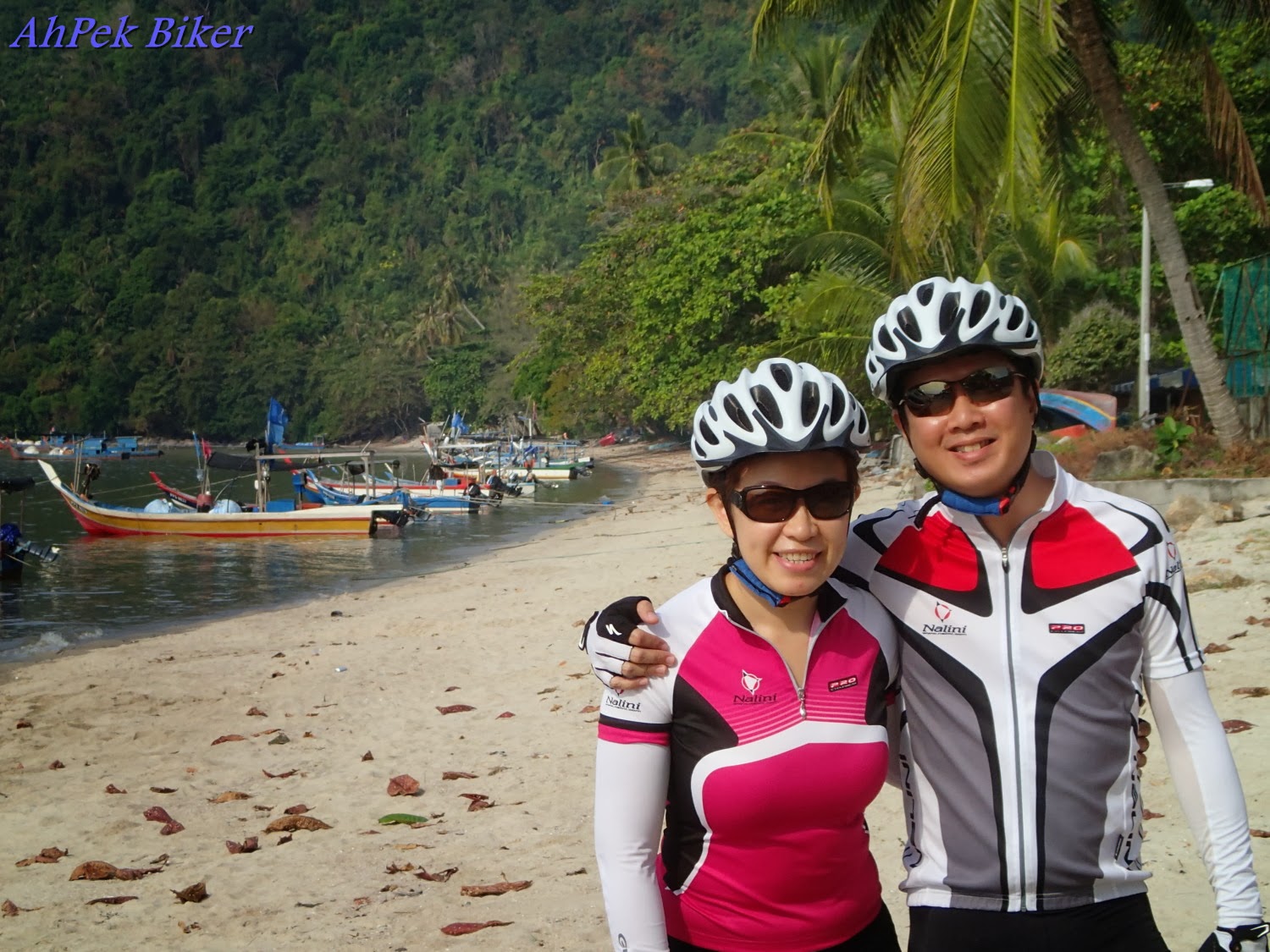 The nice stretch of beach here can be quite romantic too, heh heh! 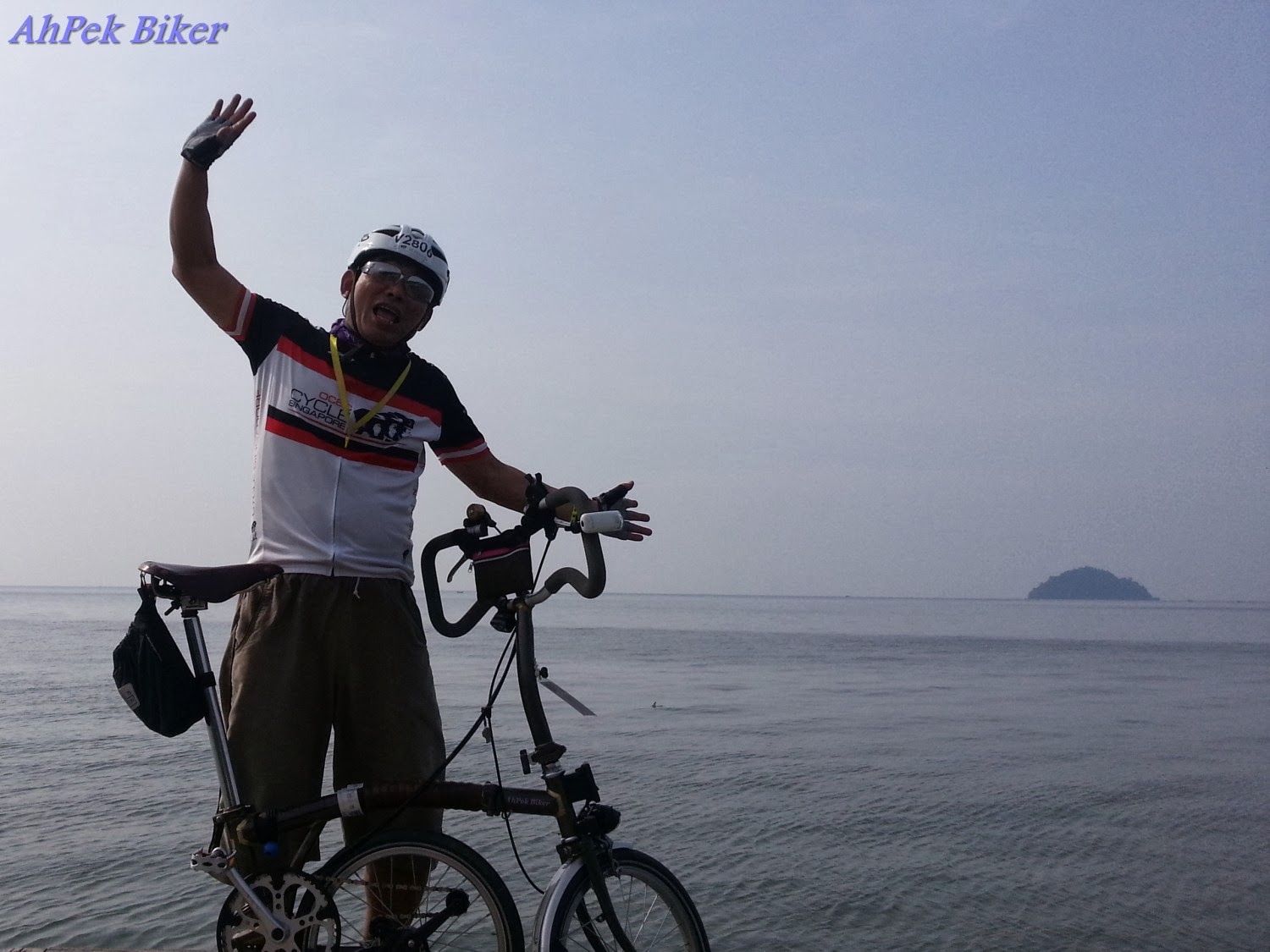 And here I am cycling in the sea! To the right is Pulau Kendi. 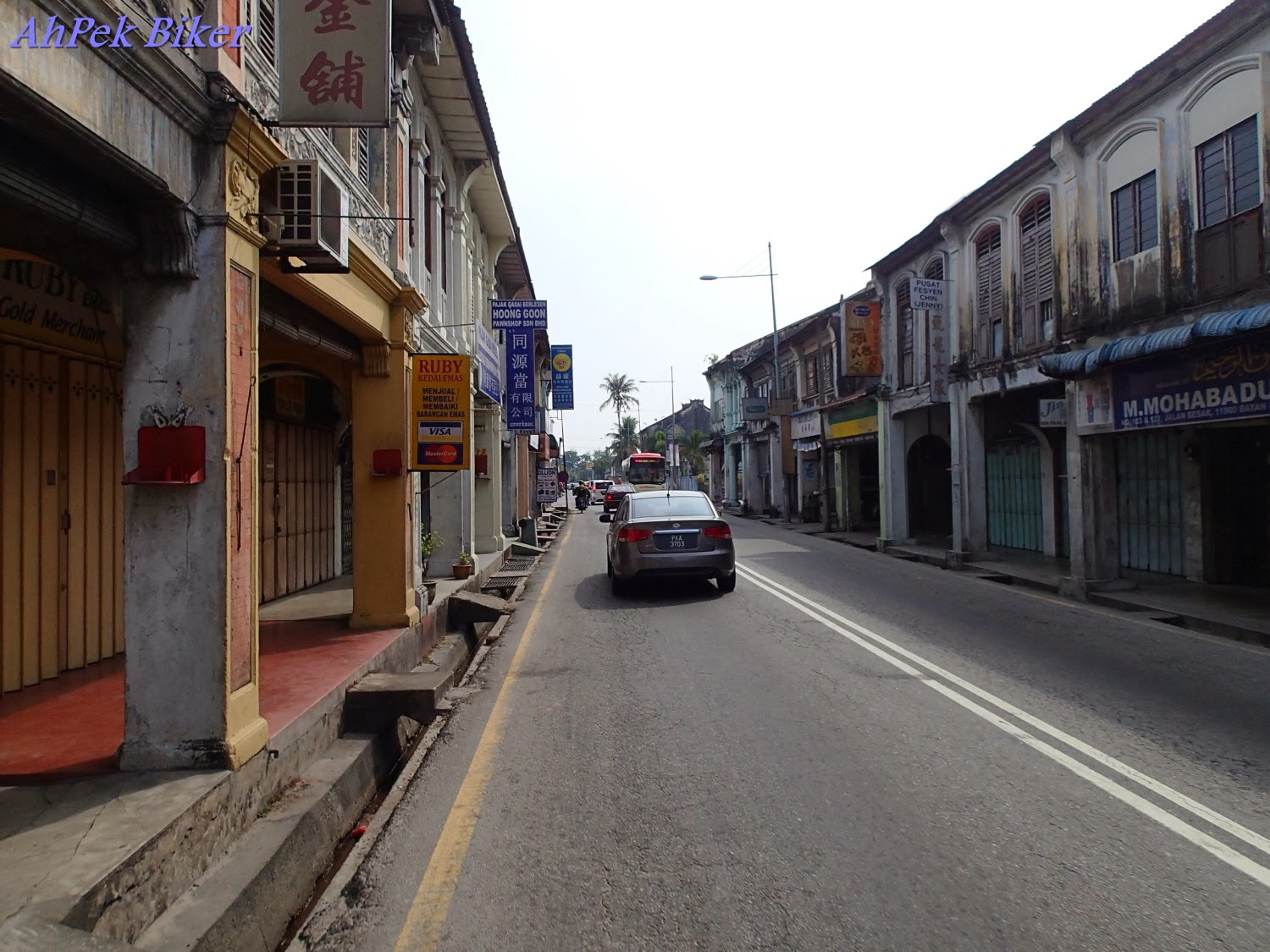 Our route back was via the old road, passing by the old town centre of Bayan Lepas. The two rows of colonial house seems unchanged from decades back. 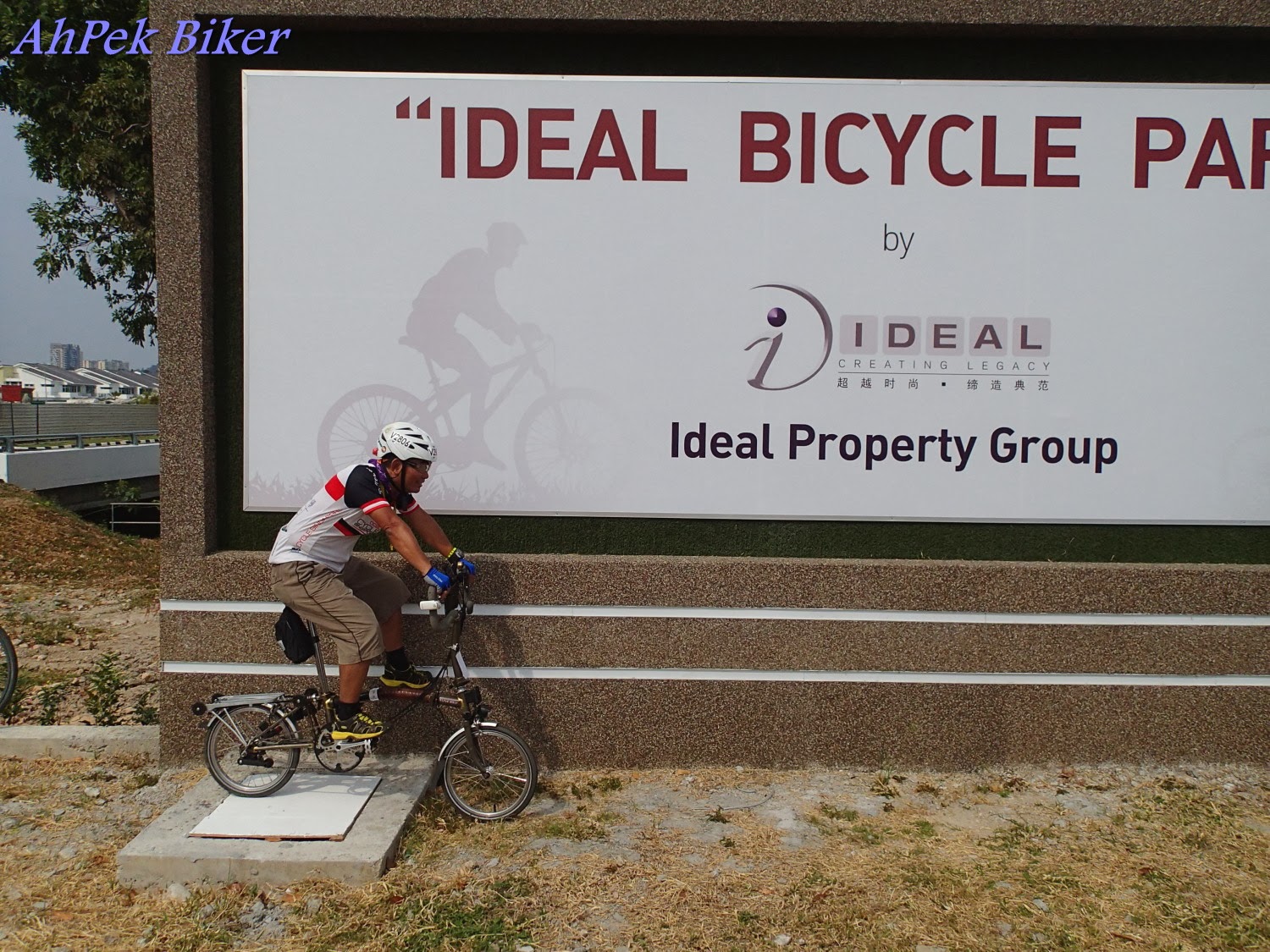 Another 1-5 kilometre away, at Jalan Tun Dr. Awang, the Ideal Bicycle Park, a new housing development that is coming up should interest cyclists. Included in the new development is a six kilometre cycling path. It may not be much, but it's a start. If every developer starts to provide cycling lanes in their development, these lanes could then be connected to form a network with connection that will allow cyclists to ride all the way through. This is something I wrote about while cycling through some lanes during the Magic Carpet Ride in Sungai Ara. 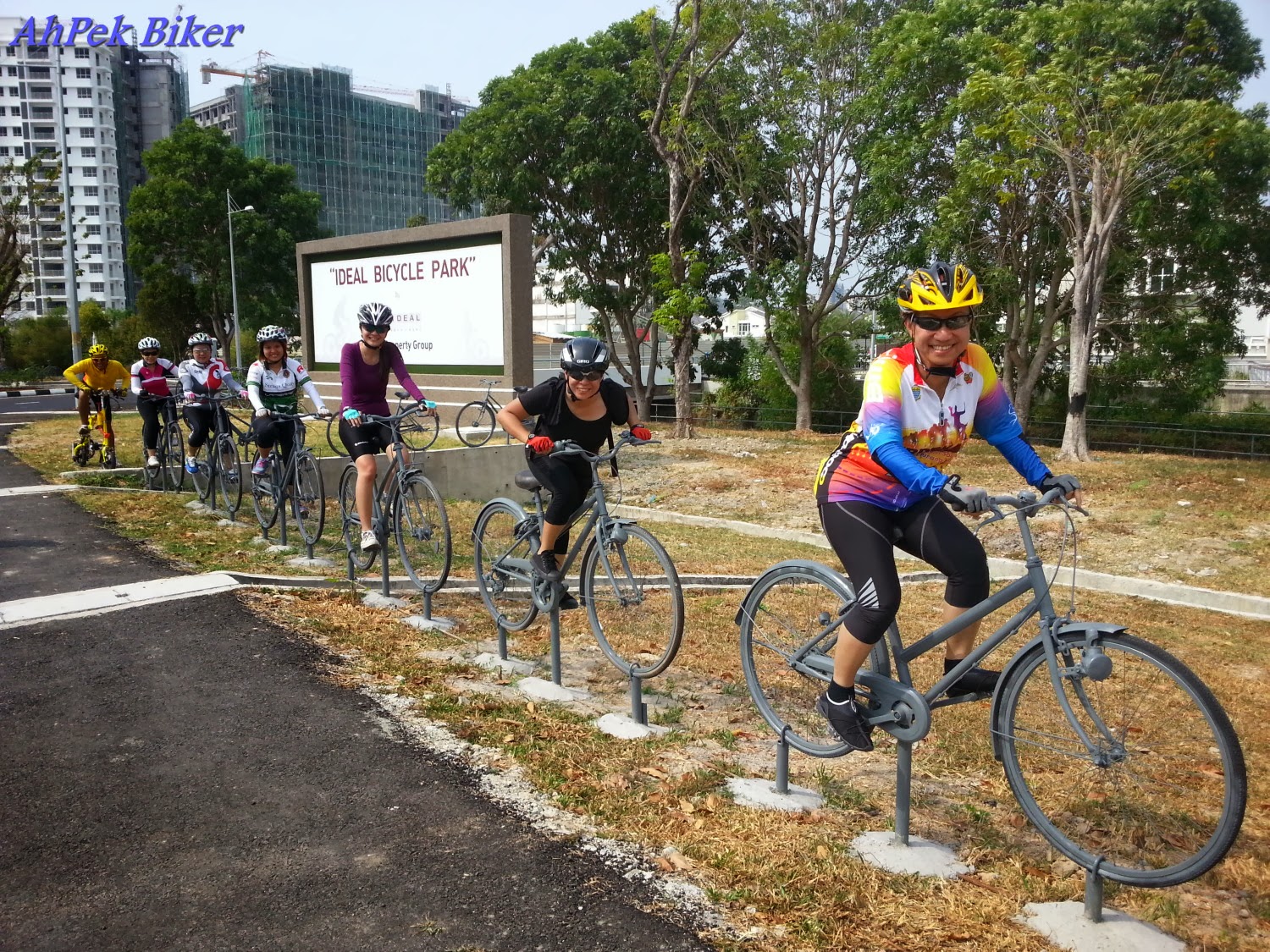 Okay, seriousness aside now, time to have some fun.
At the entrance to this new development are some fifty odd bicycles put there by the developer to promote the development as bicycle friendly. These bicycles, anchored to the ground, are nice to look at AND also nice to have fun on! The ladies taking their turn, all smiling and happy. 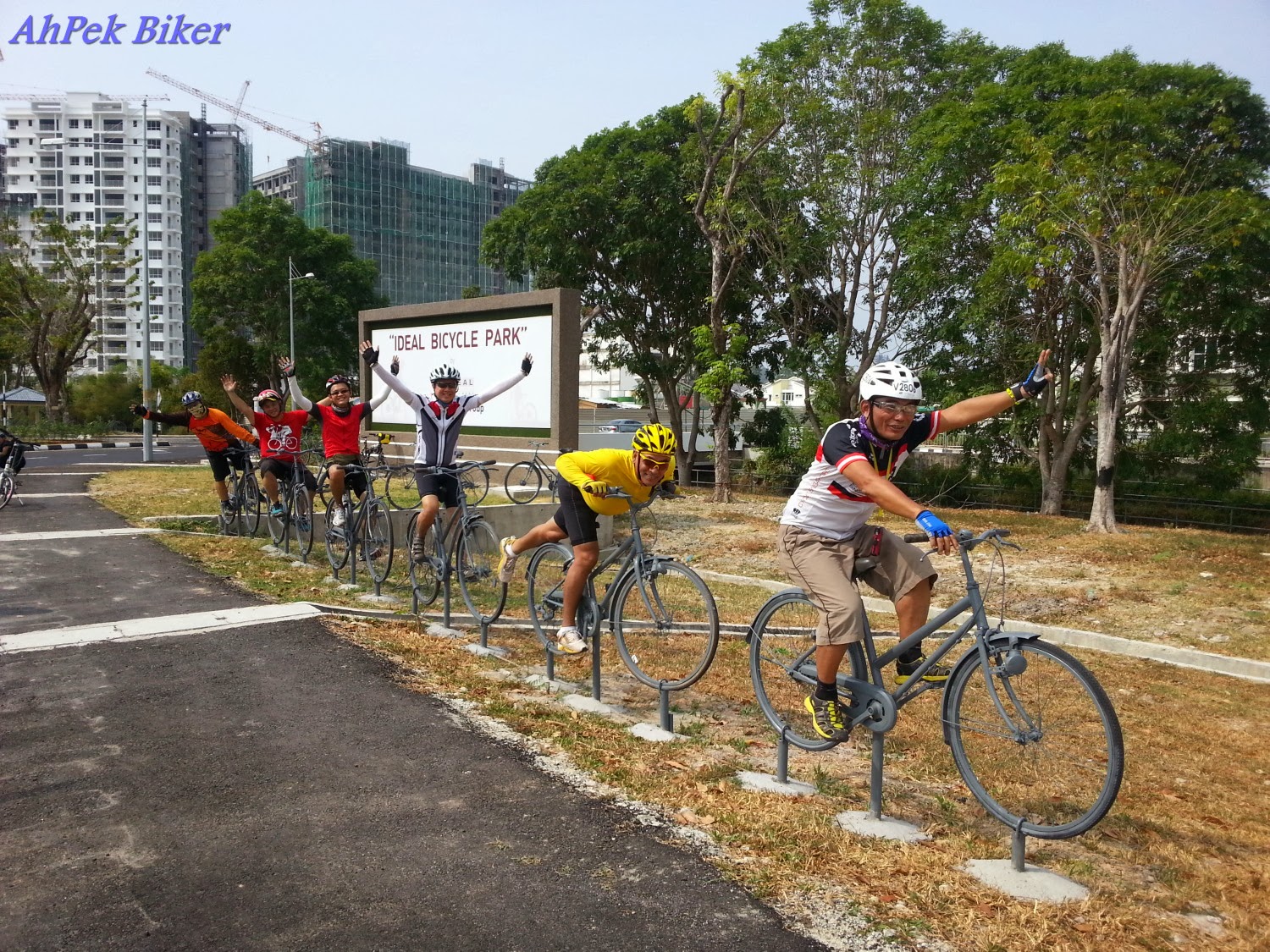 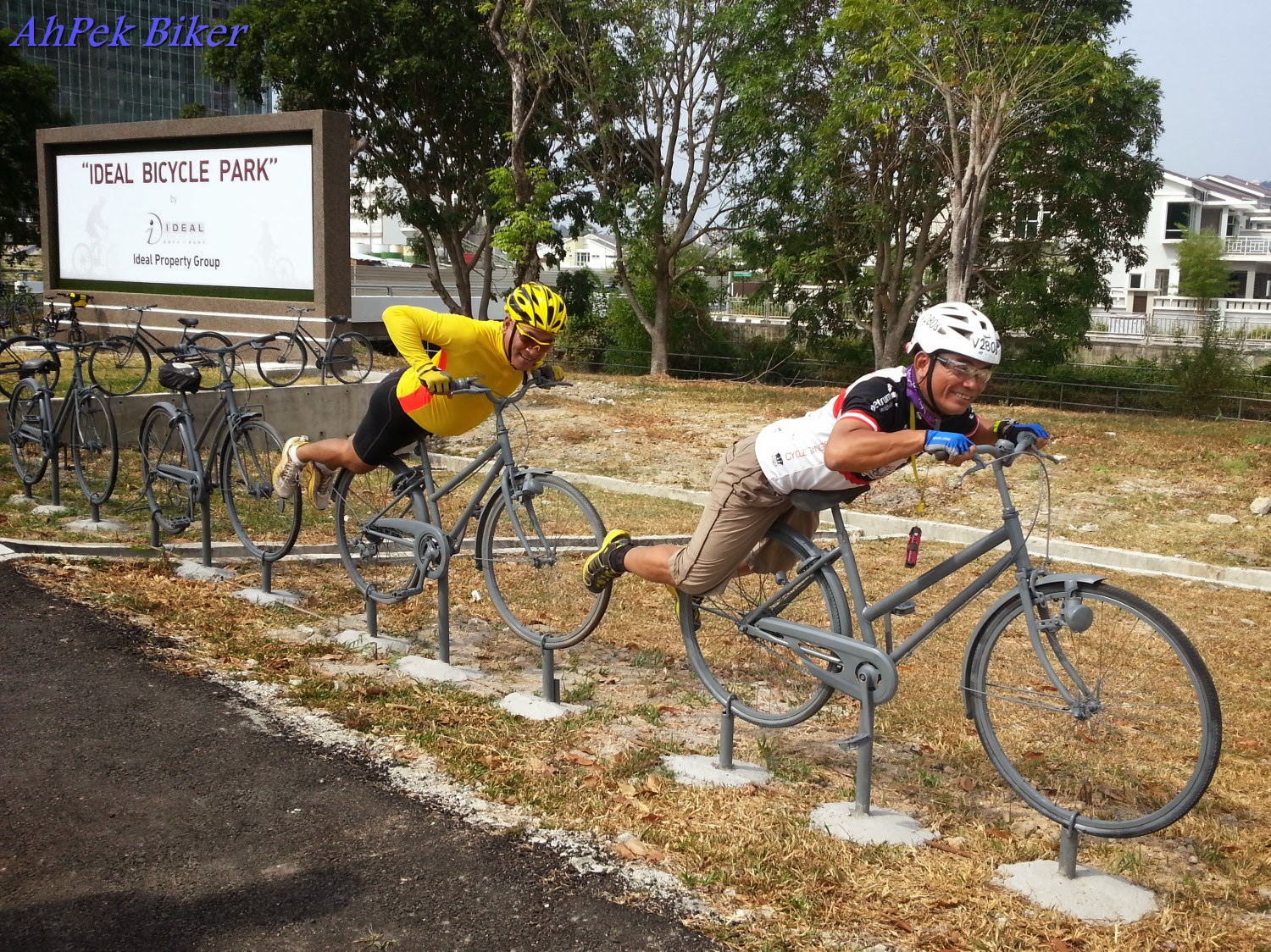 ... a bit of "Mat Rempit" style before heading back. 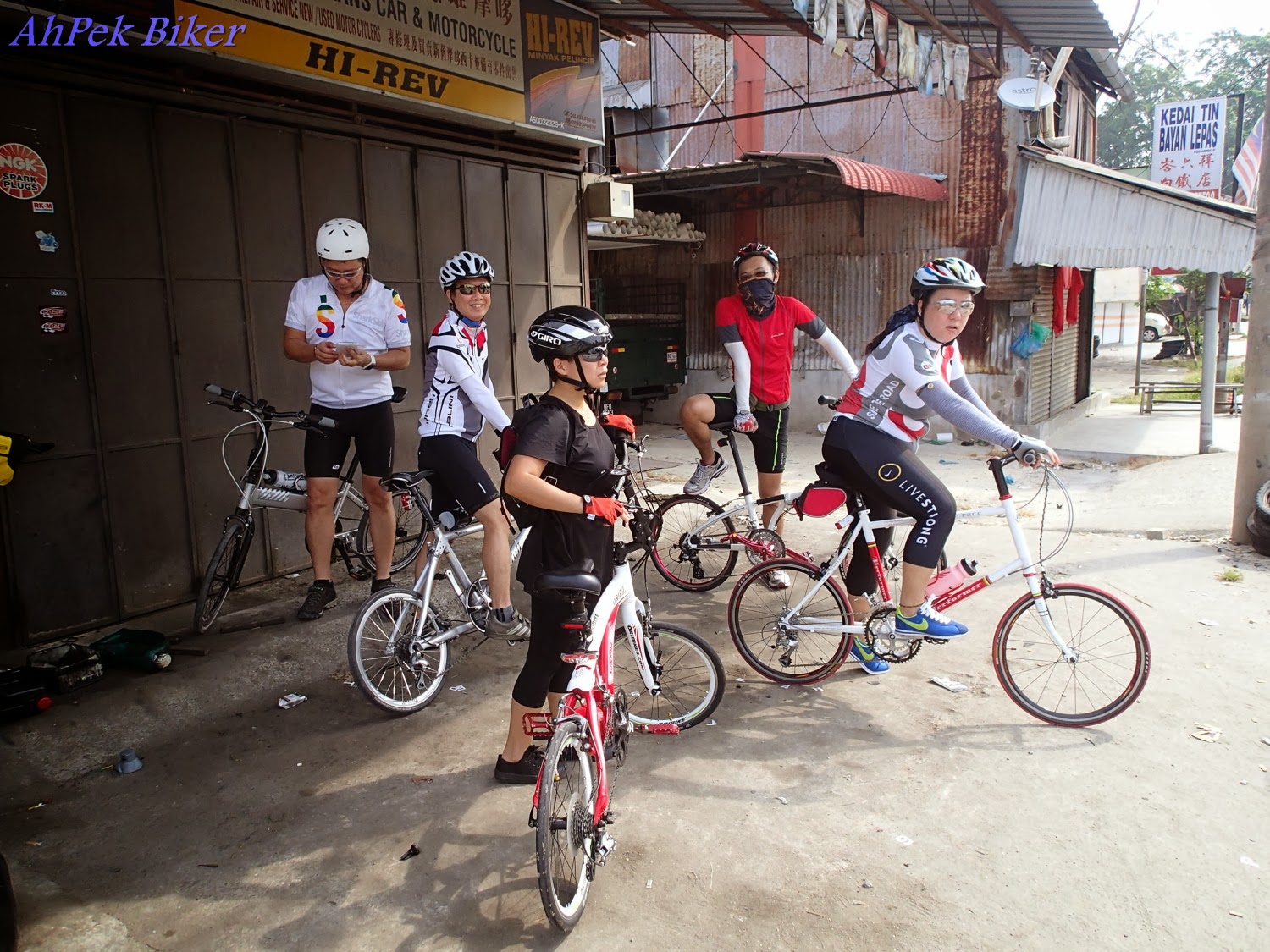 It has been a good ride; one that took us to the new 2nd Penang Bridge, up to a out-of-the-way rustic fishing village and onwards to a new development that will cater for cyclists. It's good to ride with my friends from this island again.
Many thanks to Winson, Larry and Jimmy for organizing a fun ride for this AhPek.

You are at - Jotaro's Blog / AhPek Biker / Cycling Malaysia / Penang / A Ride To Sea's End
If you like this, view my other blogs at Jotaro's Blog
(comments most welcomed below. if you like this pls share via facebook or twitter)
Posted by Jotaro Zen at 11:08 AM