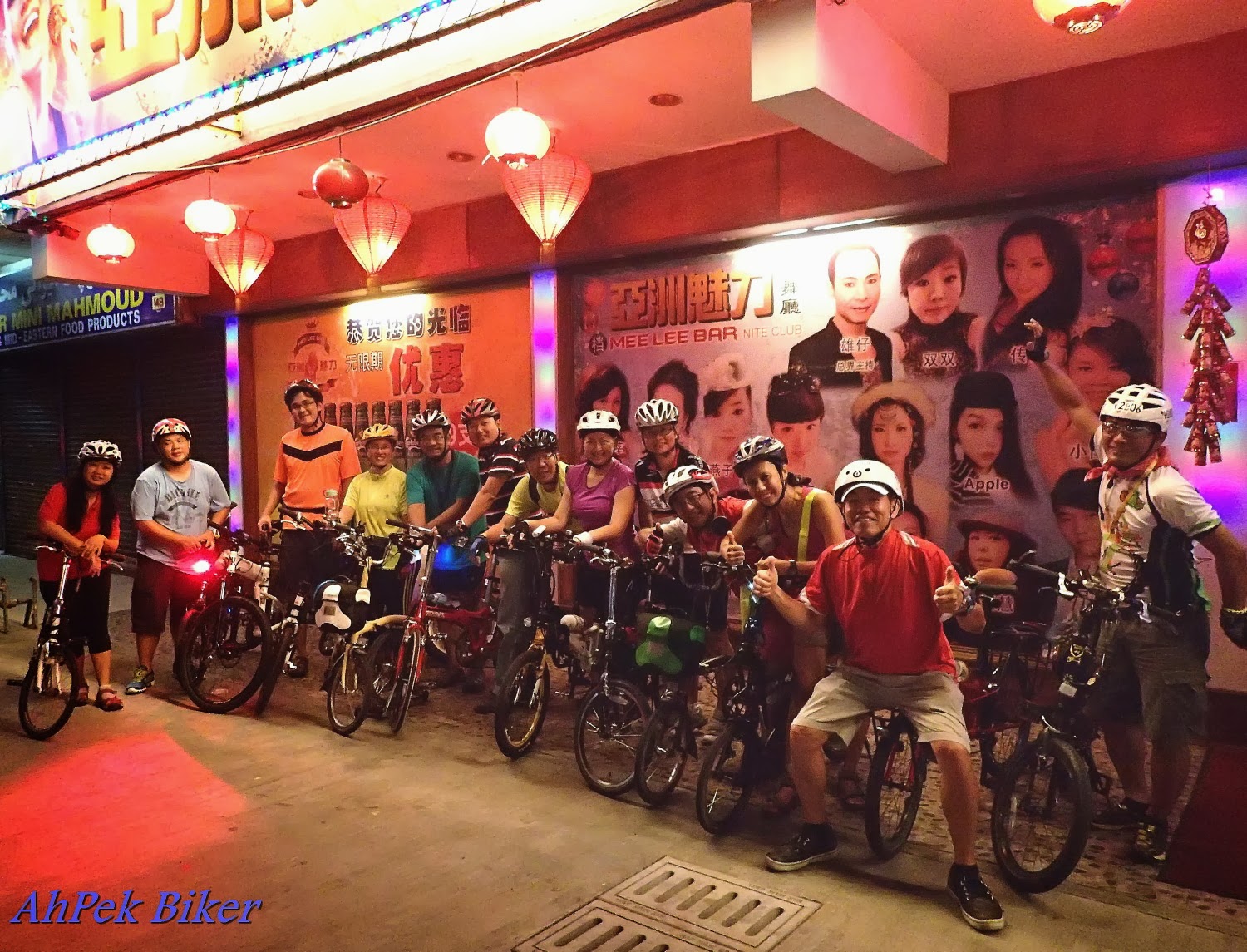 PRELUDE
We Chinese just fine many reasons to celebrate, we celebrate reunion dinners at the end of a Chinese New Year. We celebrate the ushering of the New Chinese Year, we also celebrate prayer festivities to various gods (... see Jade Emperor God Festival @ Penang Clan Jetties).
And we bikers will find any good reason to cycle. Of course we can cycle anytime, but a ride will always be more memorable if it is to celebrate something. A couple of weeks earlier we did just that, ride to celebrate the end of the previous Chinese Year.

Just a few days earlier, most of us had took part in Kuala Lumpur's own car-free day (... see blog). The Mayor has declared that every first Sunday of the month will be a car-free day and this one was the second of such.
It's been a good, busy start for 2014; and now we are going to ride our iron horses to usher in the new Chinese Year, the Year of The Horse. How appropriate as we will be riding our iron-horses!

Our aim was to ride from Dataran Merdeka to have dinner at one of our favourite restaurants, Laomazis at Jalan Ipoh. Cycling straight there would have been a cinch, but then Tailim (of the hApPy HaPpy blogs) took us on a round about way. It was a longer route that would take us on interesting paths and bridges through the Sentul and Batu Cantonment areas. 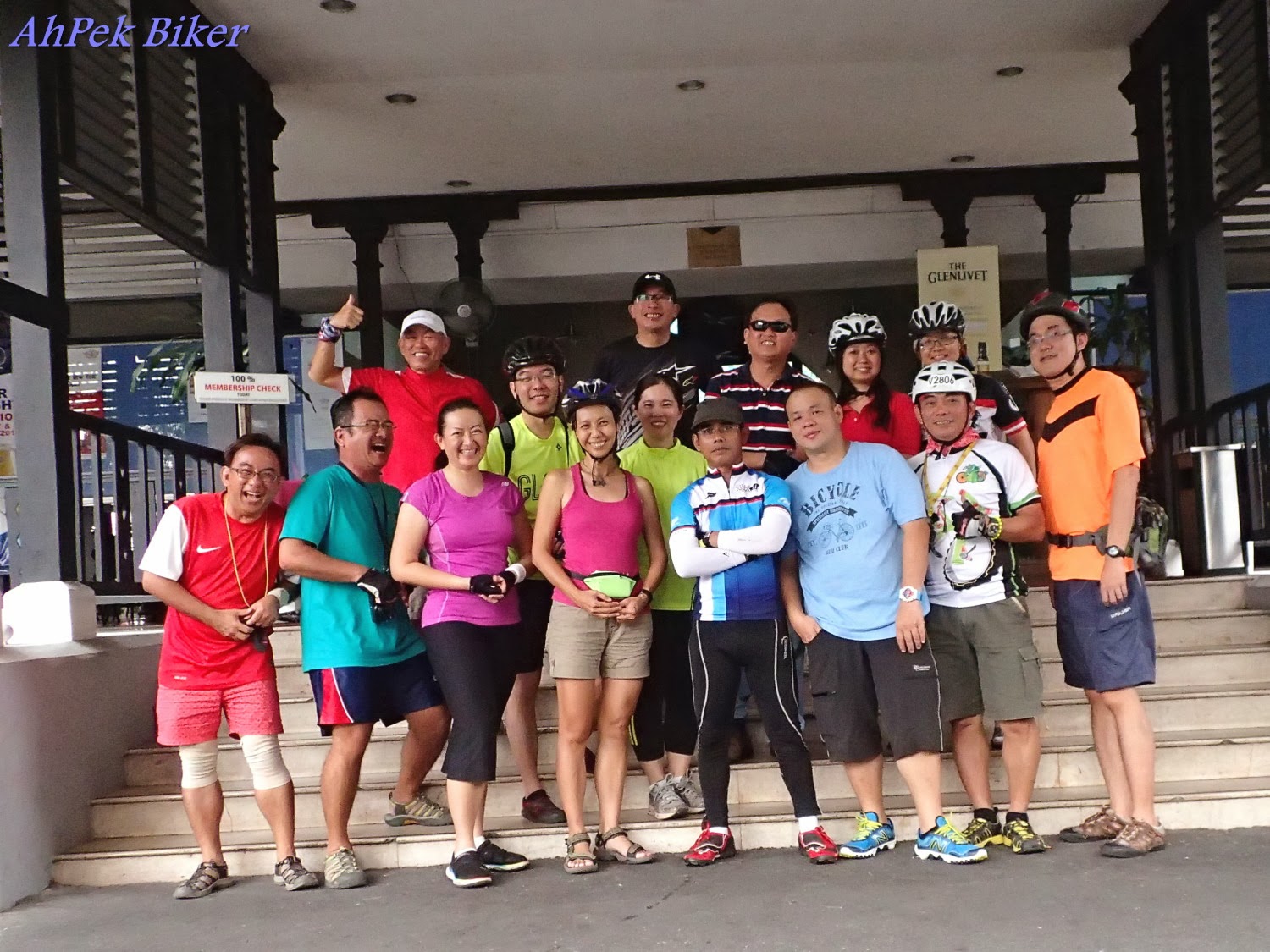 We met up at the Royal Selangor Club at Dataran Merdeka, all of us still in a happy Chinese New Year mood. 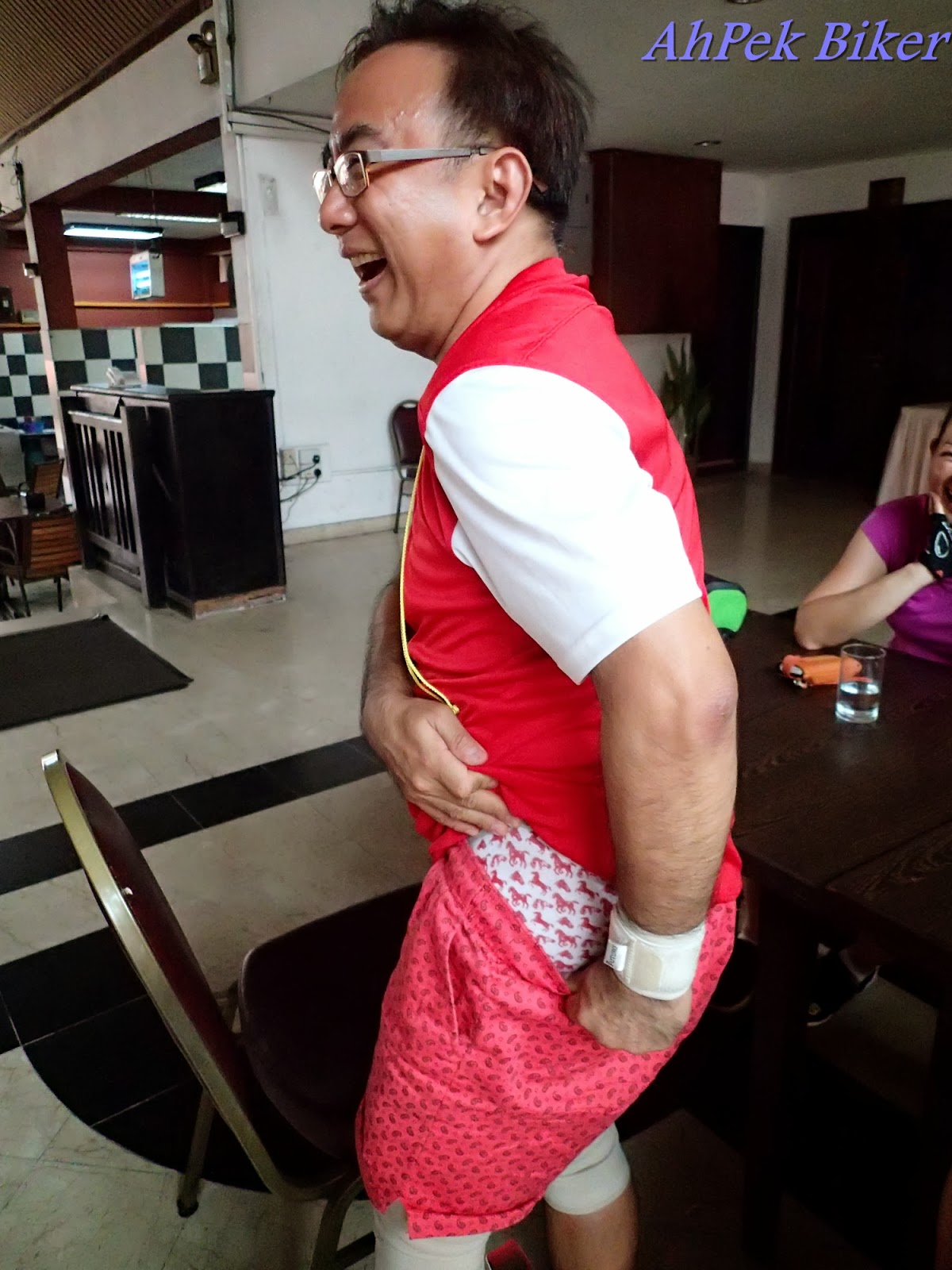 Chris was in a real Chinese New Year mood, wearing red. Even his boxers were red on white. His shorts reminded me of those patterns on red "ang pow" packets. Cool! 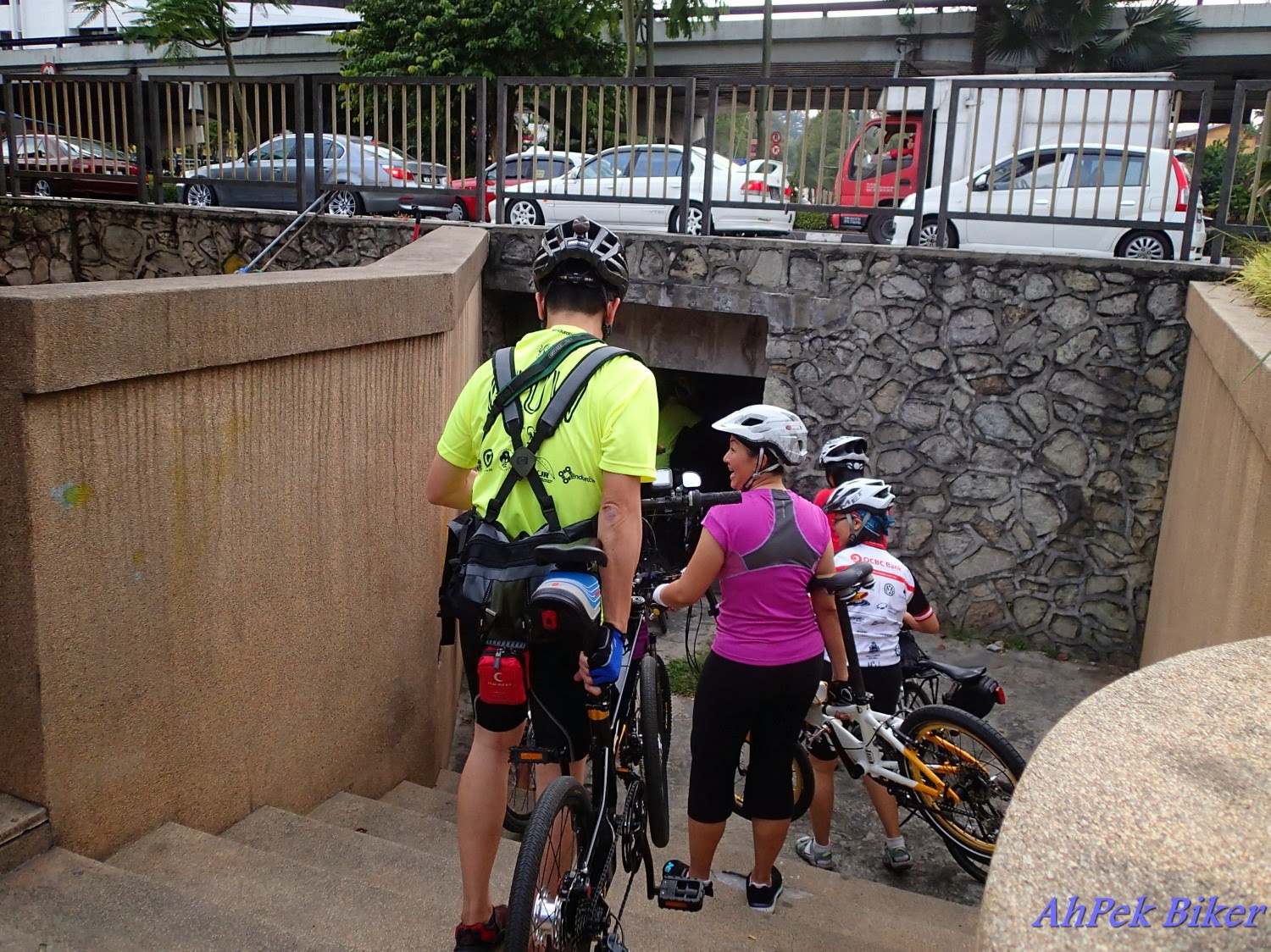 6:10 pm - Hah! We started off not by cycling, but by carrying our bicycles down some steps at the northern corner of Dataran Merdeka. 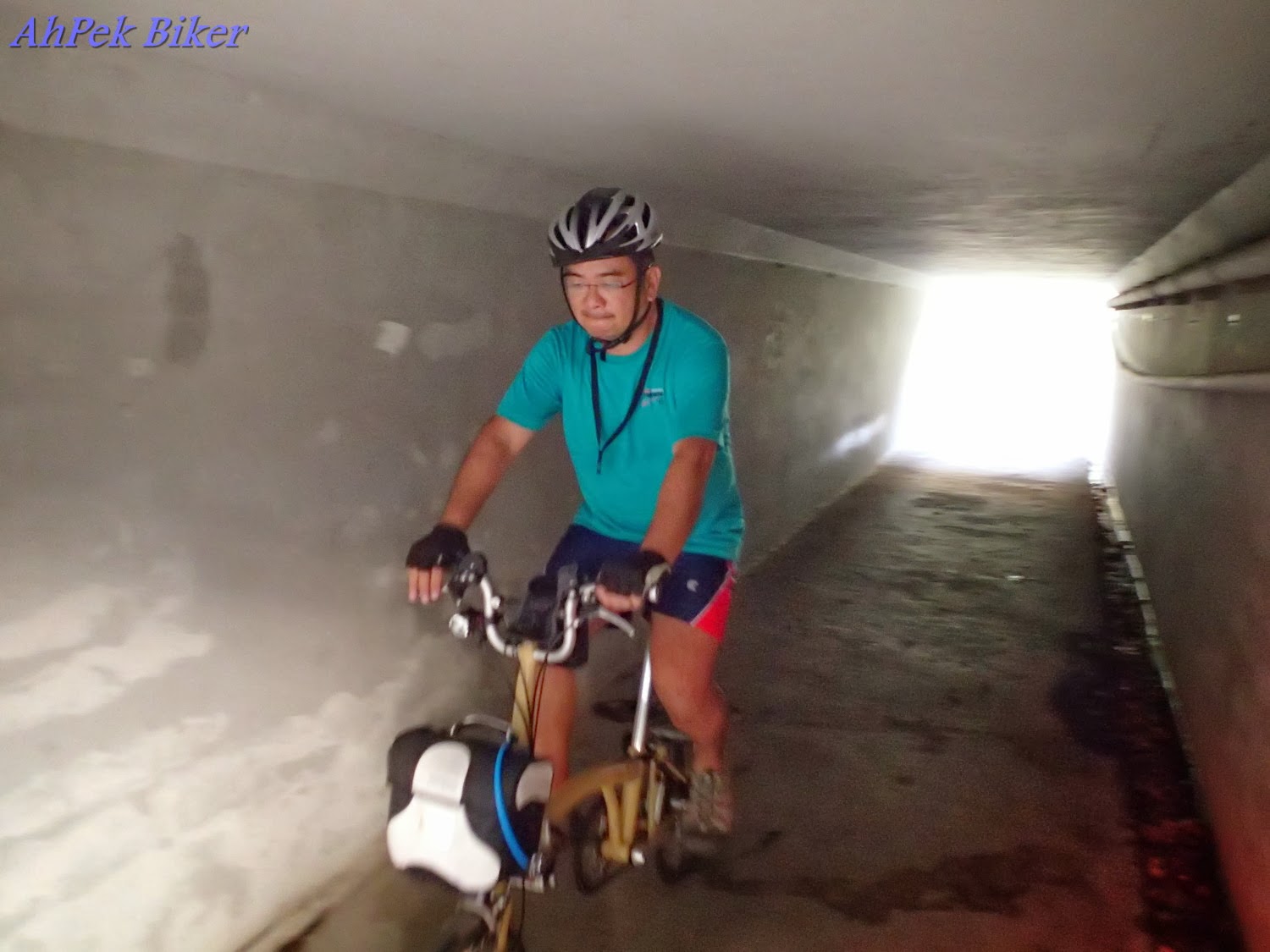 This just to get to the tunnels below the Bank Negara Round-a-bout at Jalan Parlimen. The traffic above was horrendously heavy. 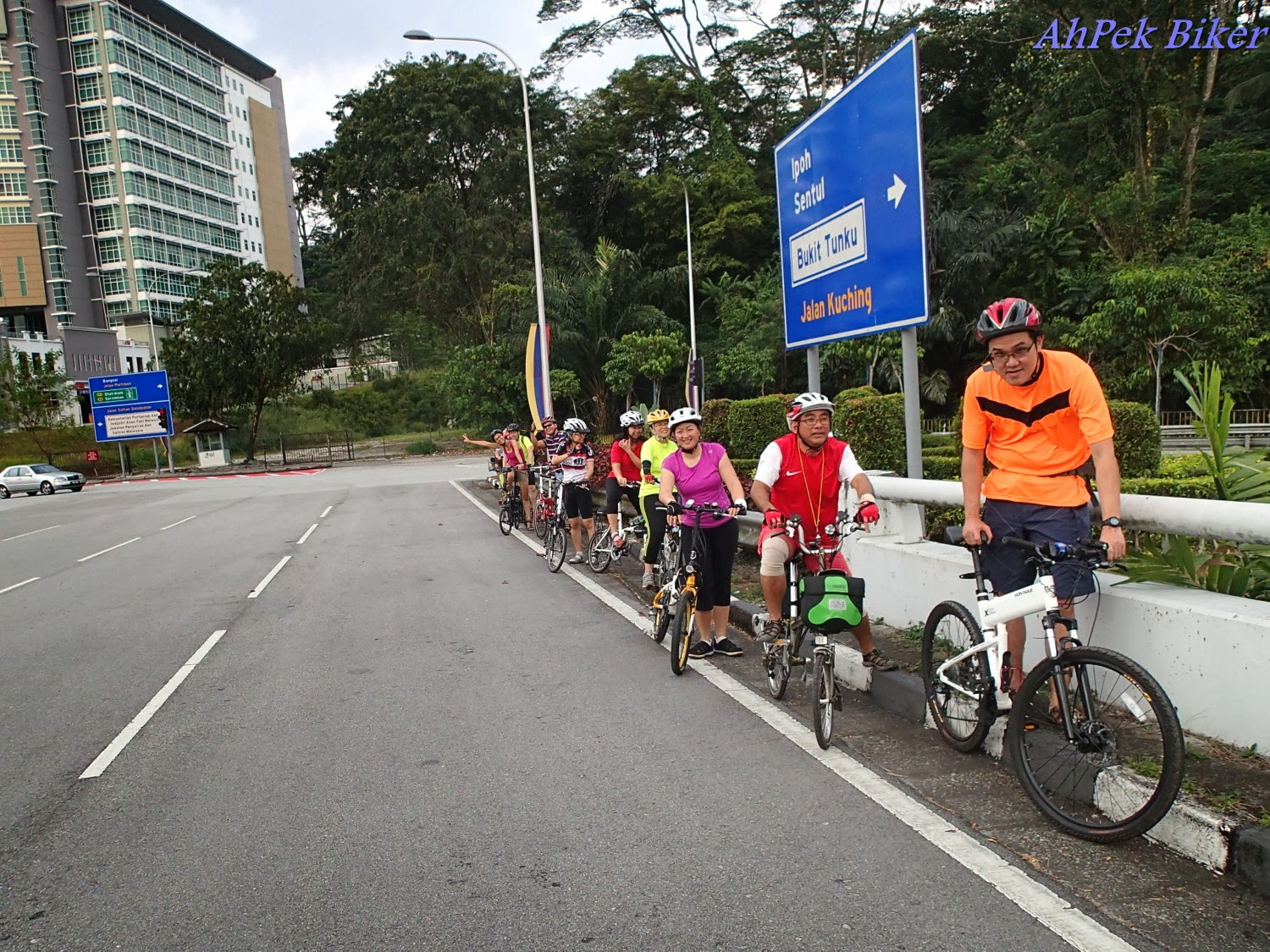 Here we are at the flyover over the Mahameru Highway after having cut through Jalan Sultan Salahhudin. We had stopped here for a short breather before taking on the slopes of Bukit Tunku. 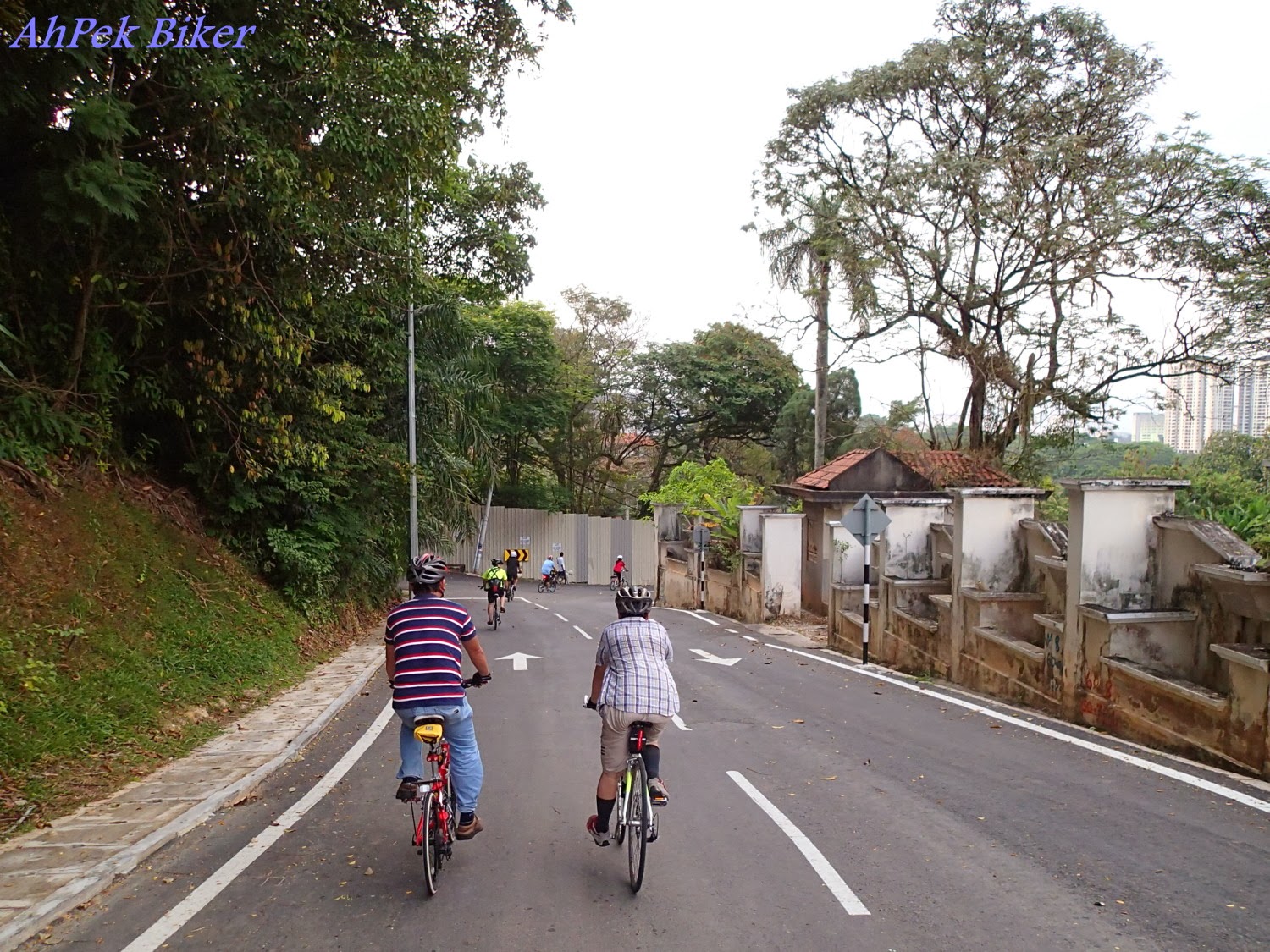 Soon we were cycling up and down (well, mostly up) the slopes of the Bukit Tunku up-market residential area. This section of our ride will definitely build up our appetites for the good food that will come later. 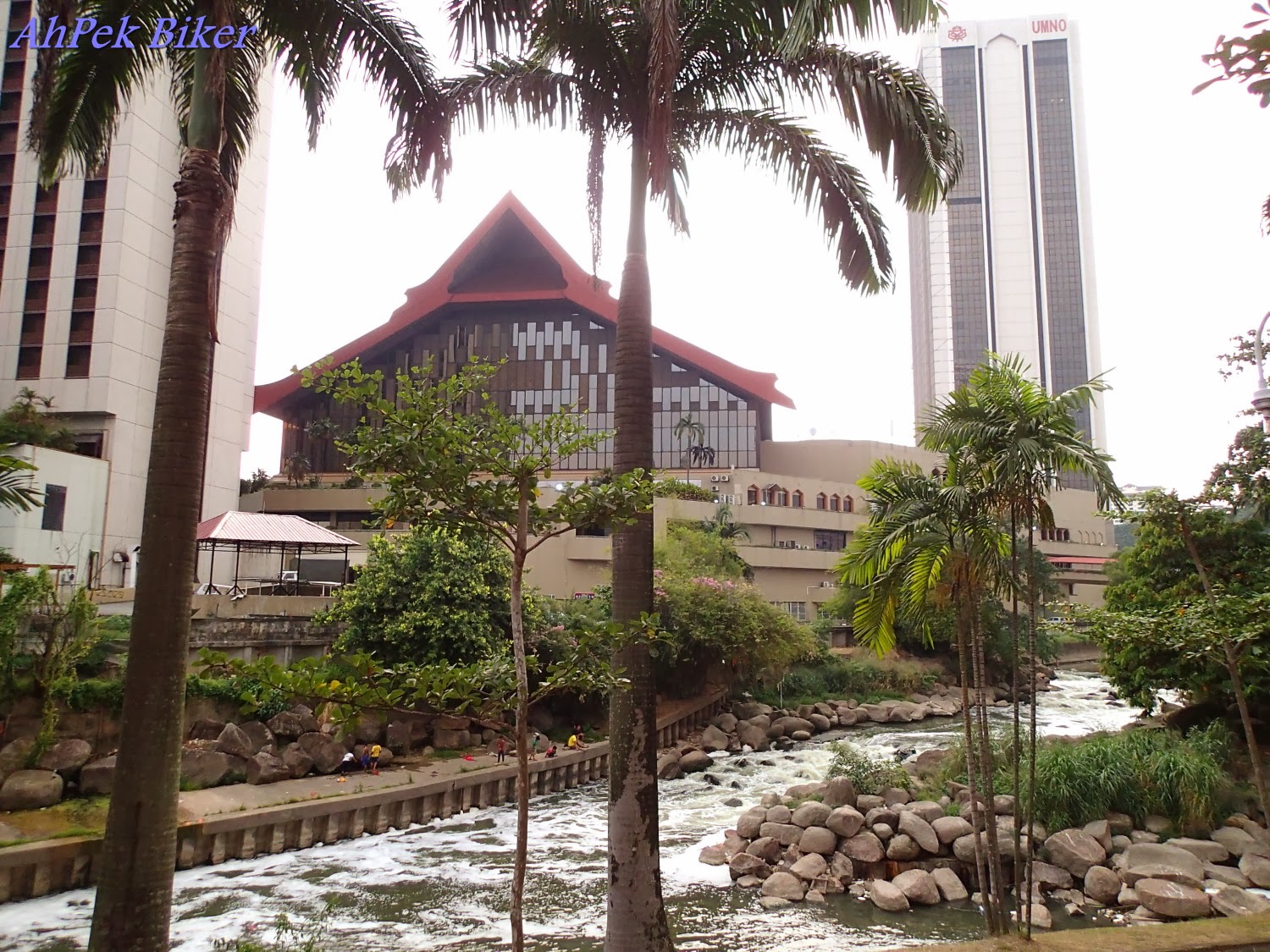 After sweating it out at the hills, at Jalan Putra we cut into some pathways behind the Putra World Trade Centre.
Hey! There's nice riverside scenery of Sungai Gombak here! This is where the interesting part of our cycling adventure of avoiding the main roads begins. 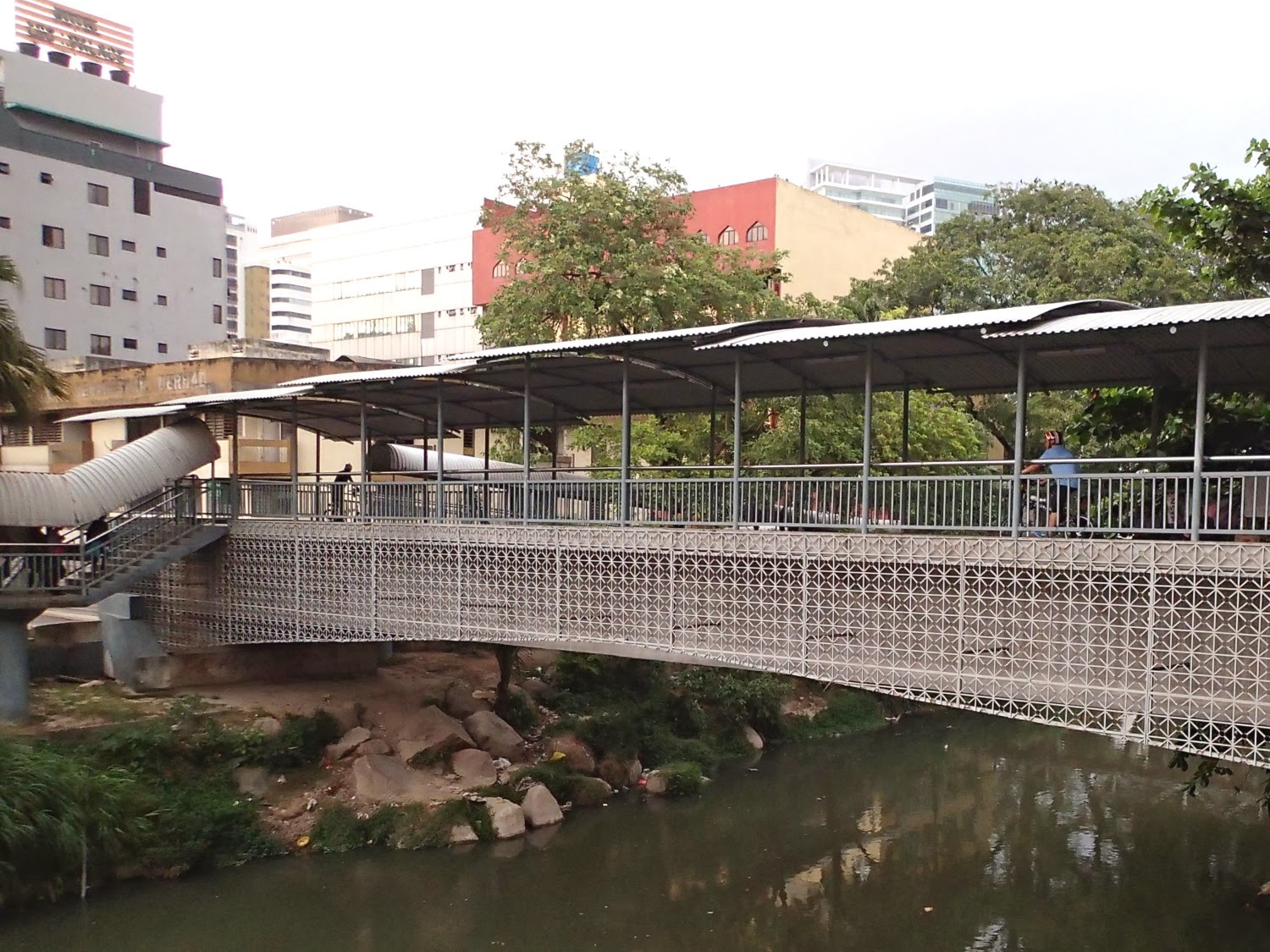 And it began with a ride on a pedestrian bridge across the river..... 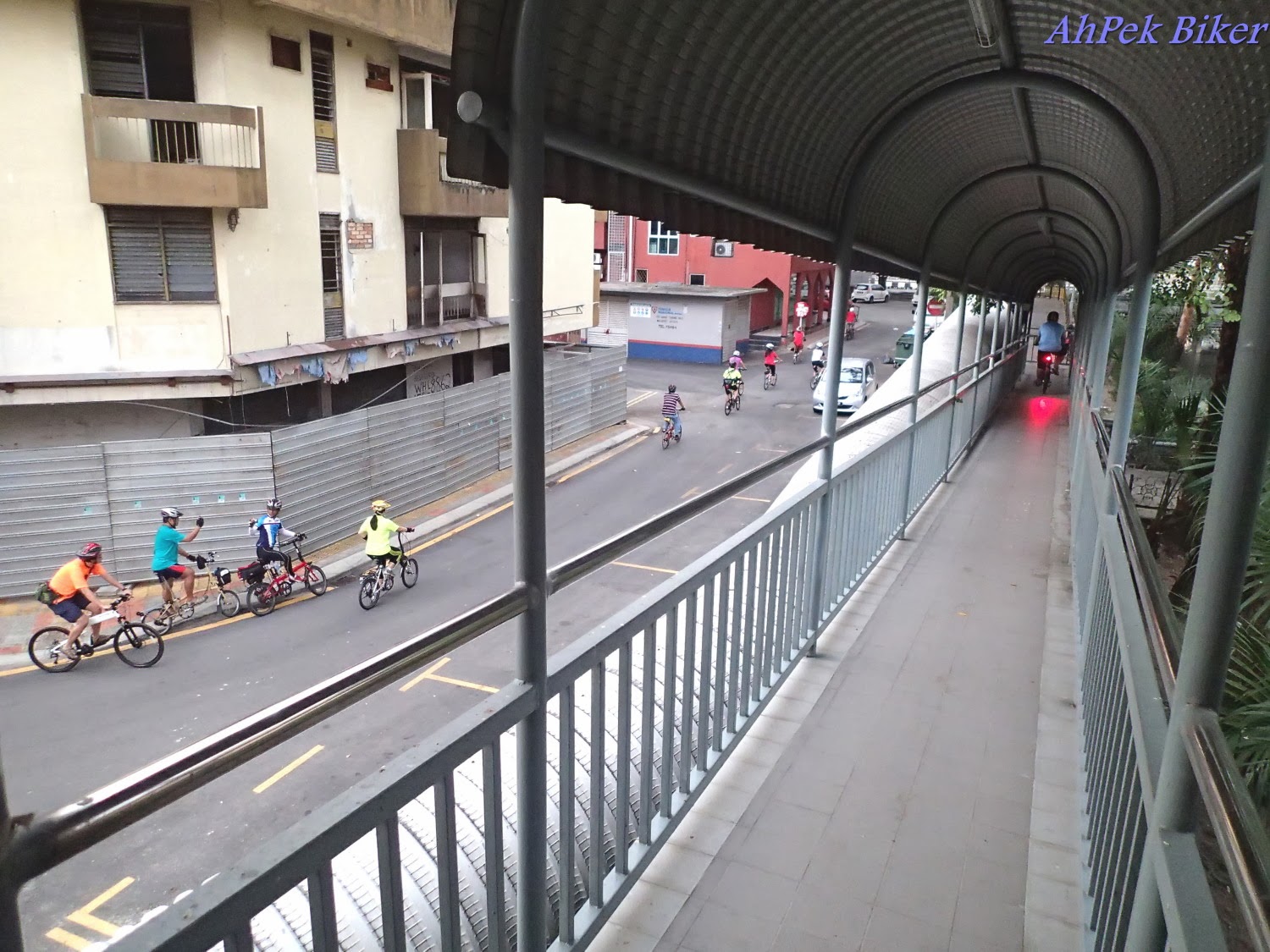 ... and down the steep ramp of the bridge and we are into the Jalan Ipoh area. Hmmm... this looks like a back-door entry to this part of town! 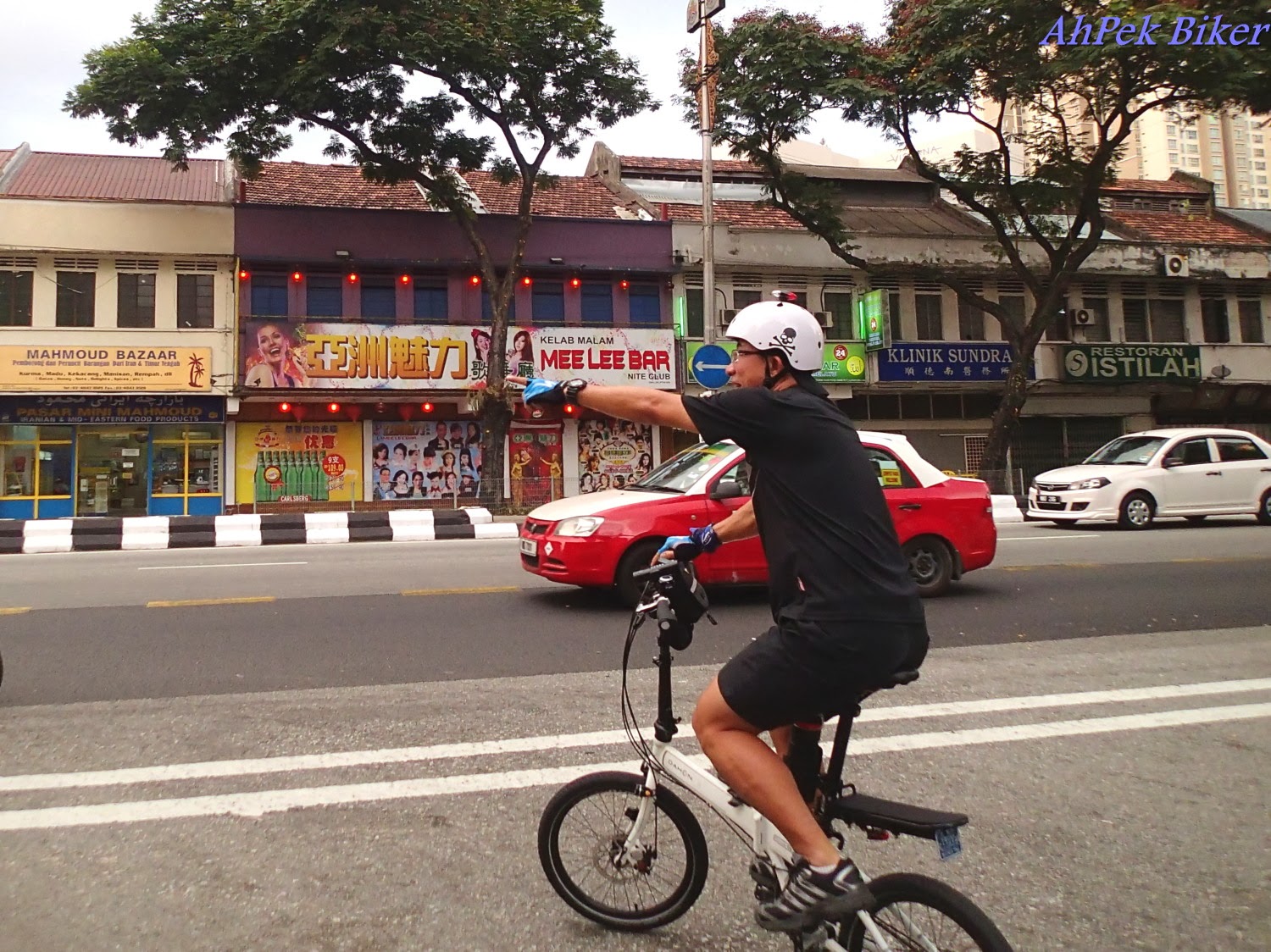 It was just a short stint at Jalan Ipoh for now. We did pass by Mee Lee Bar (on the opposite side of the road). This place would become small landmark for us to stop by whenever we are in this area; you will see why later. 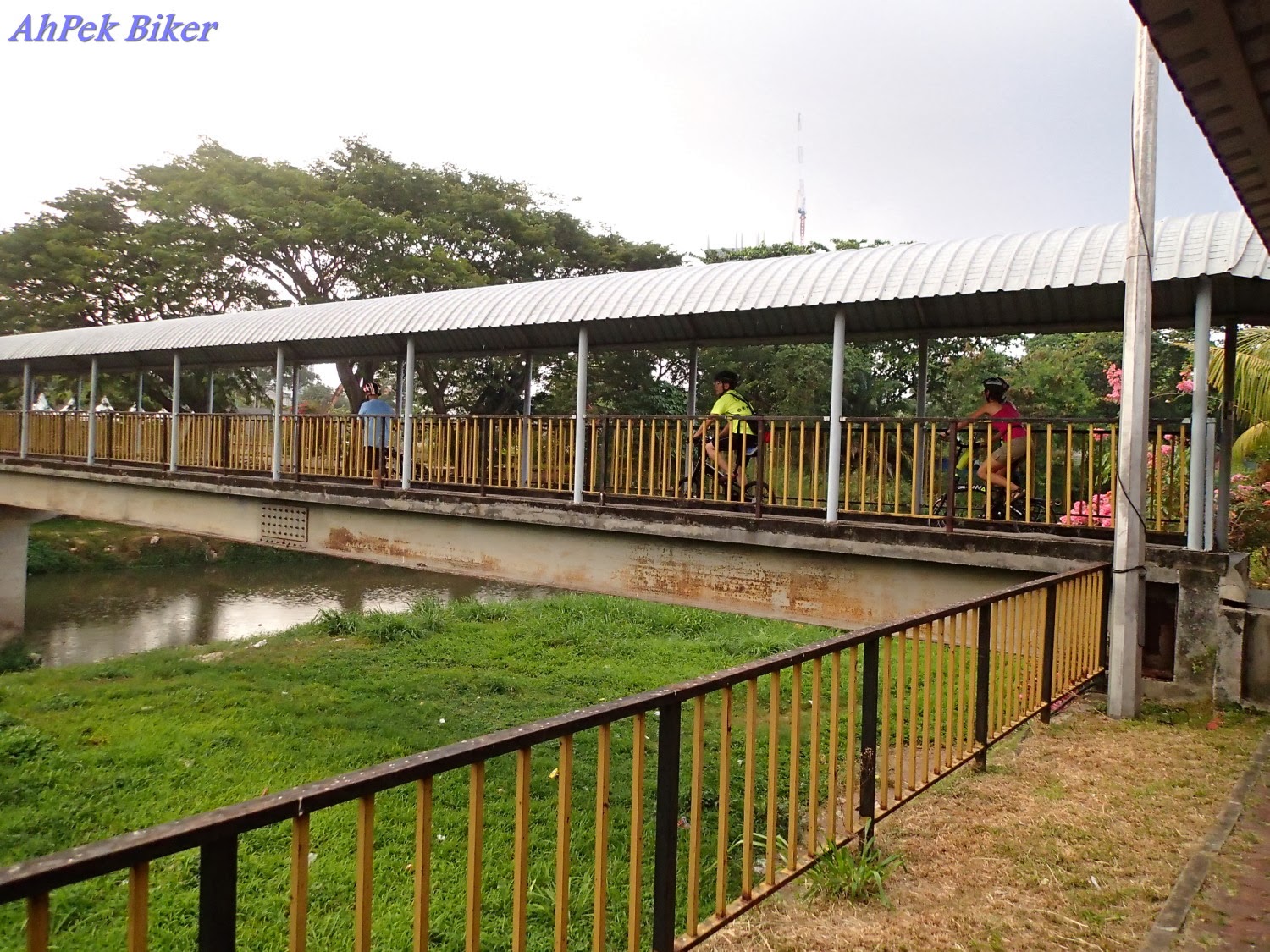 With another short ride along Jalan Pekeliling, we cut left and rode across the Sungai Gombak, this time via another bridge just after the Titiwangsa LRT station.

Down that bridge and cutting through the Sri Trengganu flats and we are on Jalan Sentul!
Hey! It's another back-door entry. Great! 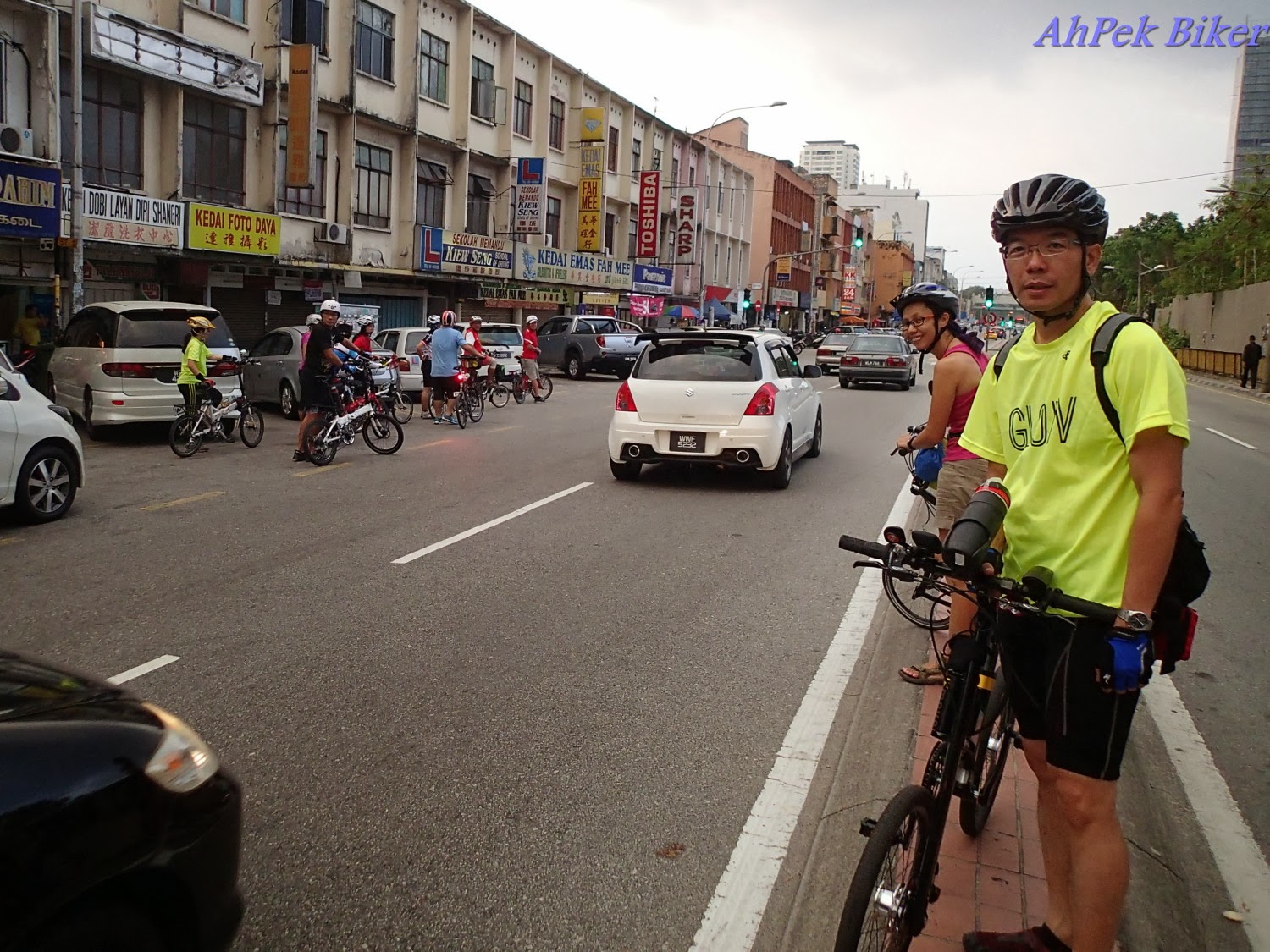 Crossing Jalan Sentul itself was rather tricky: the traffic there was moving almost non-stop. 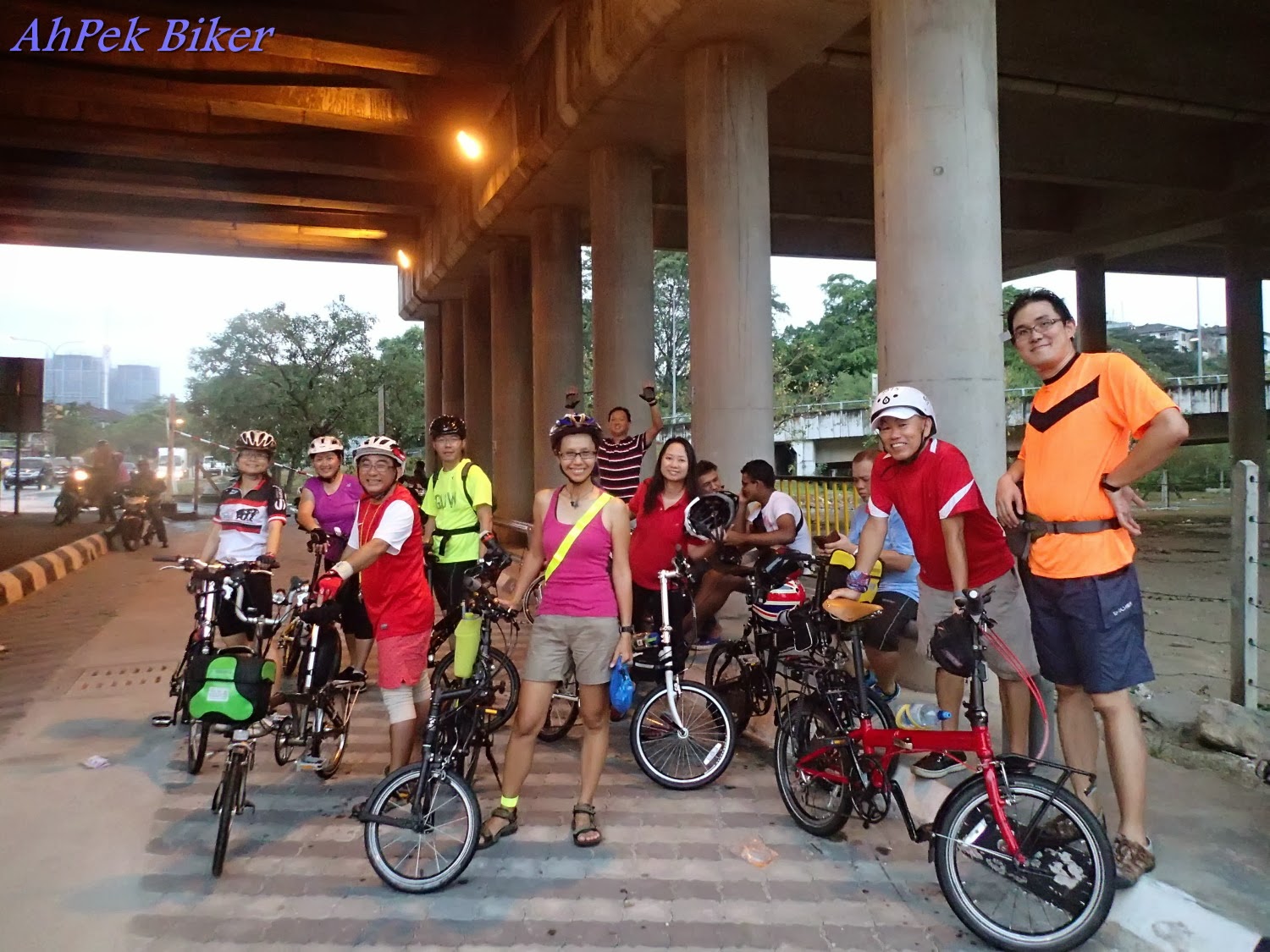 It started pouring. Here we are, patiently sheltering under an elevated part of the DUKE Highway. Slightly wet, but still smiling! 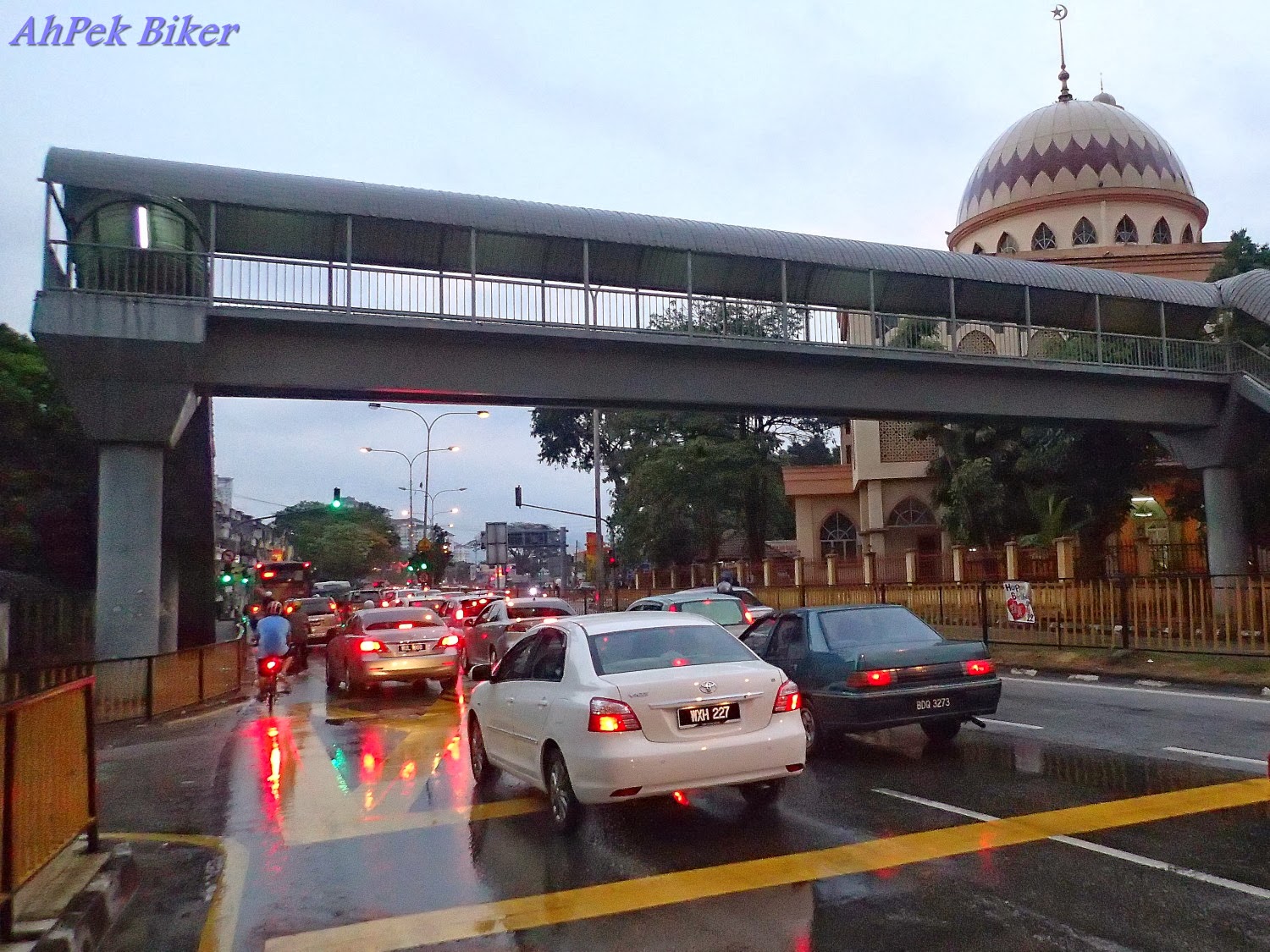 Fortunately, the rain lasted only for a short while and we continued on along Jalan Sentul. The above photo elaborates the heavy traffic I mentioned earlier. 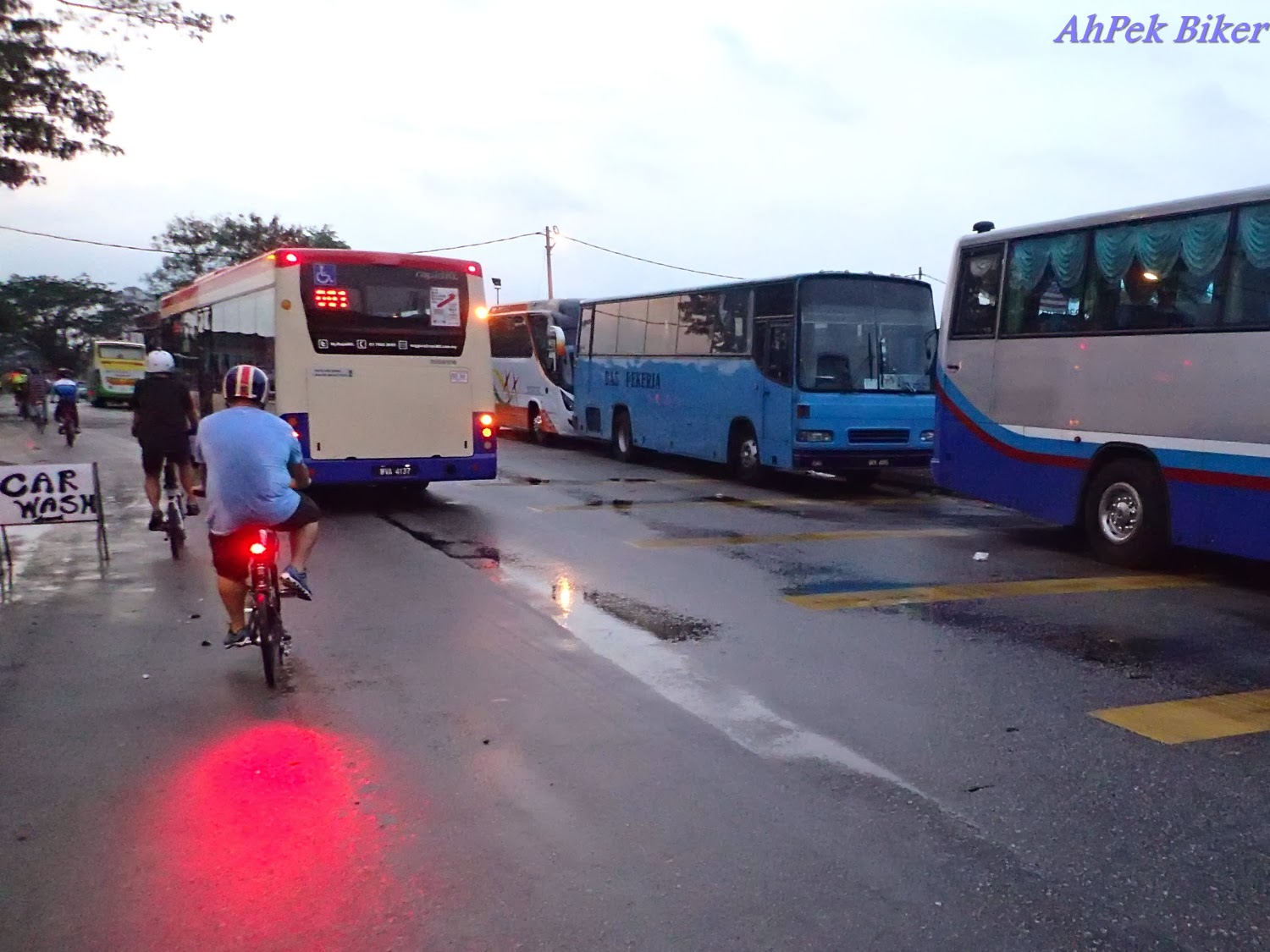 Taking a left, we left Jalan Sentul and riding through some residential area, we passed by the large Sentul Bus Depot. 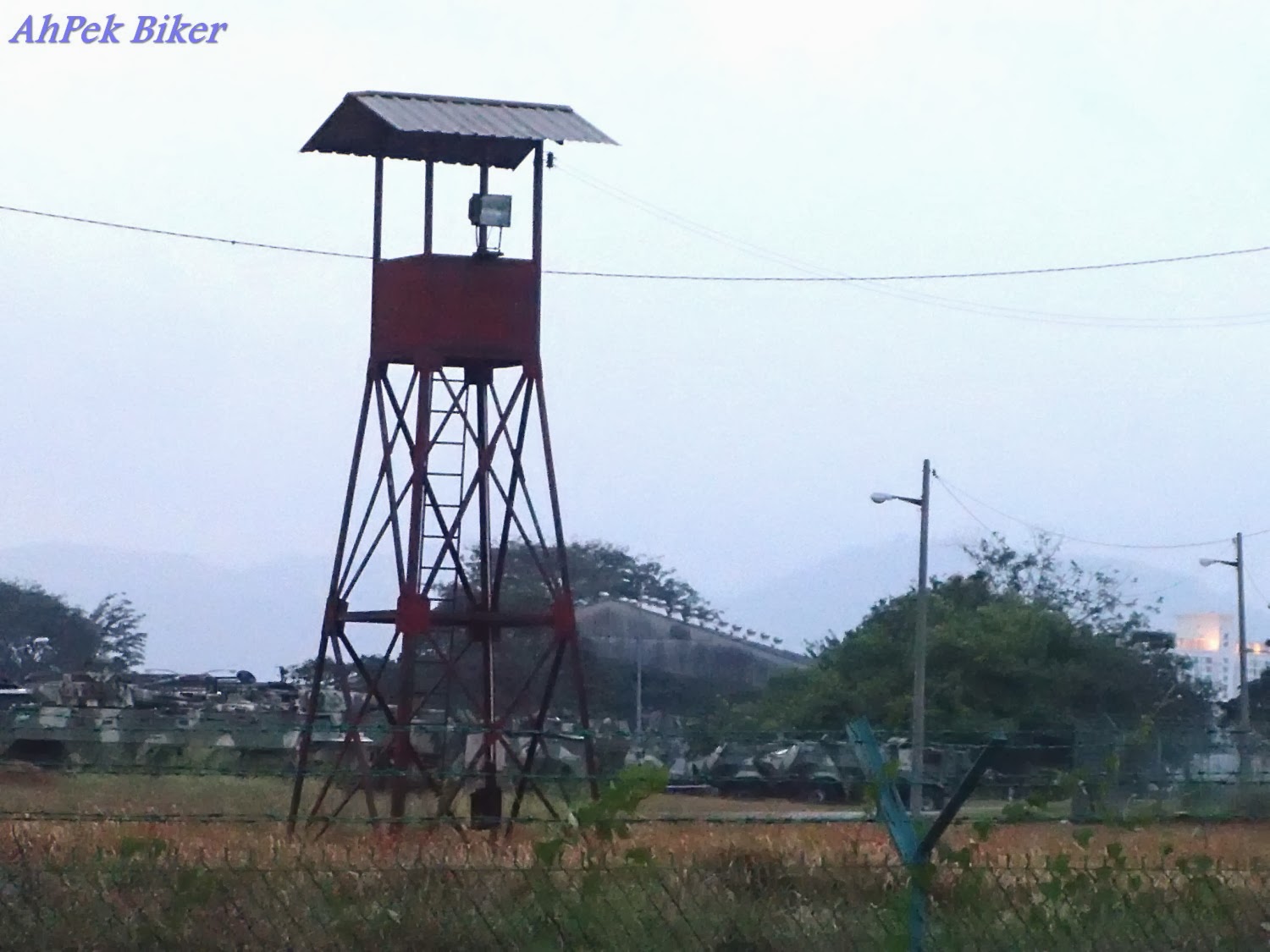 Ahead was the Batu Cantoment army depot. We stopped here for a short while to view and grab some photos of the armoured vehicles, etc. 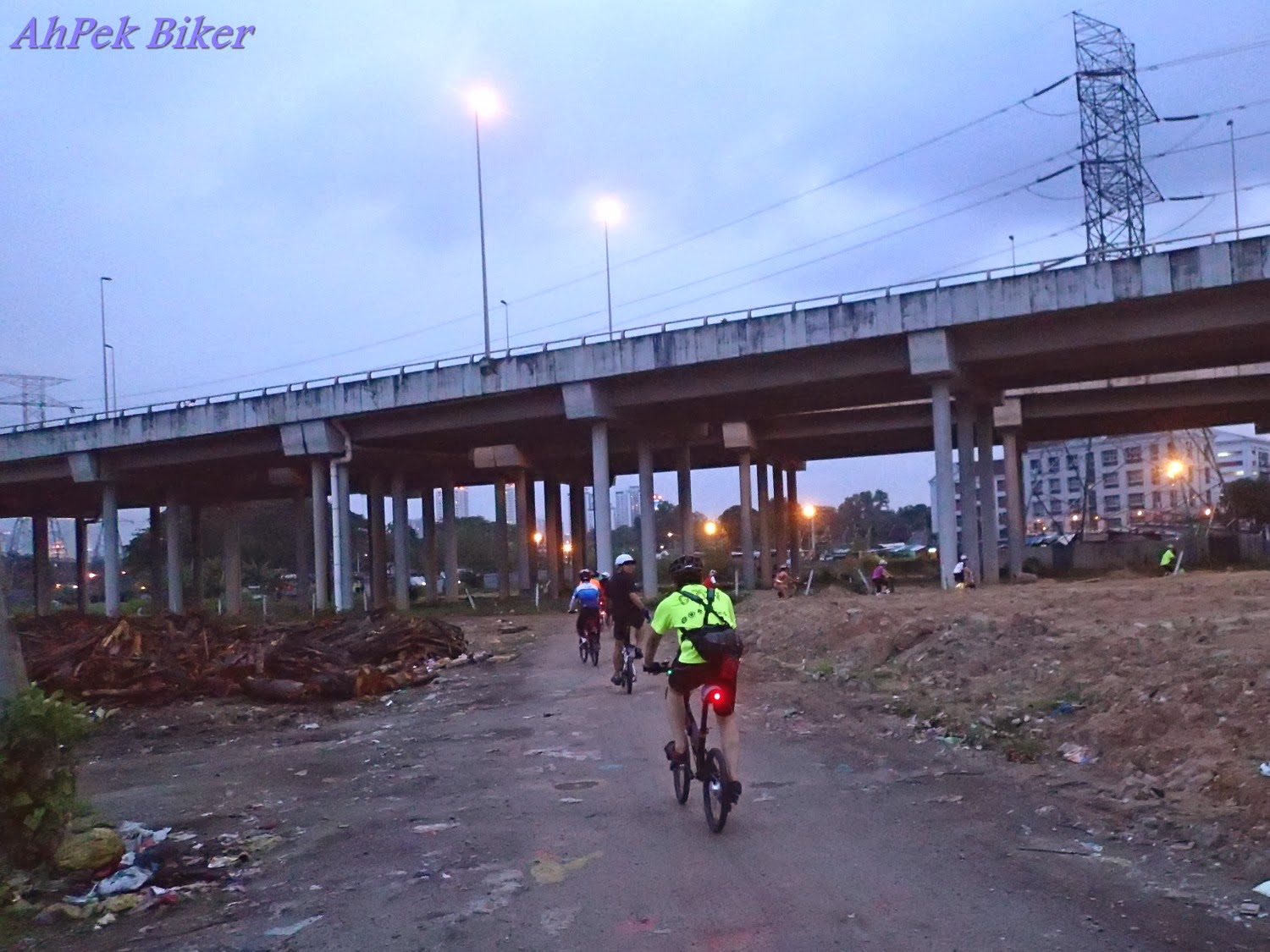 After that, our route took us across a "dirt path" that went under the DUKE Highway again... 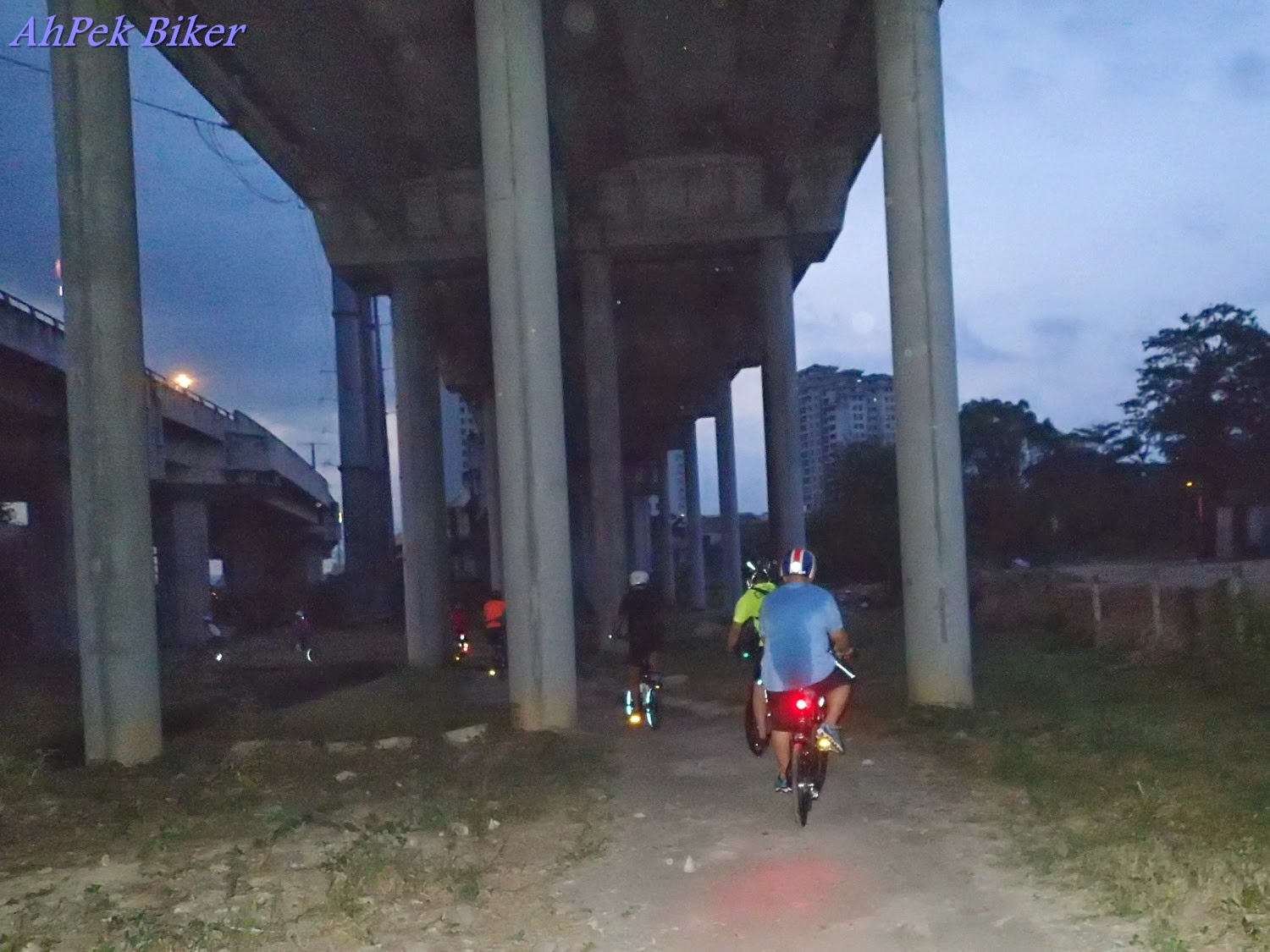 ... then riding directly along a pathway below the highway ..... 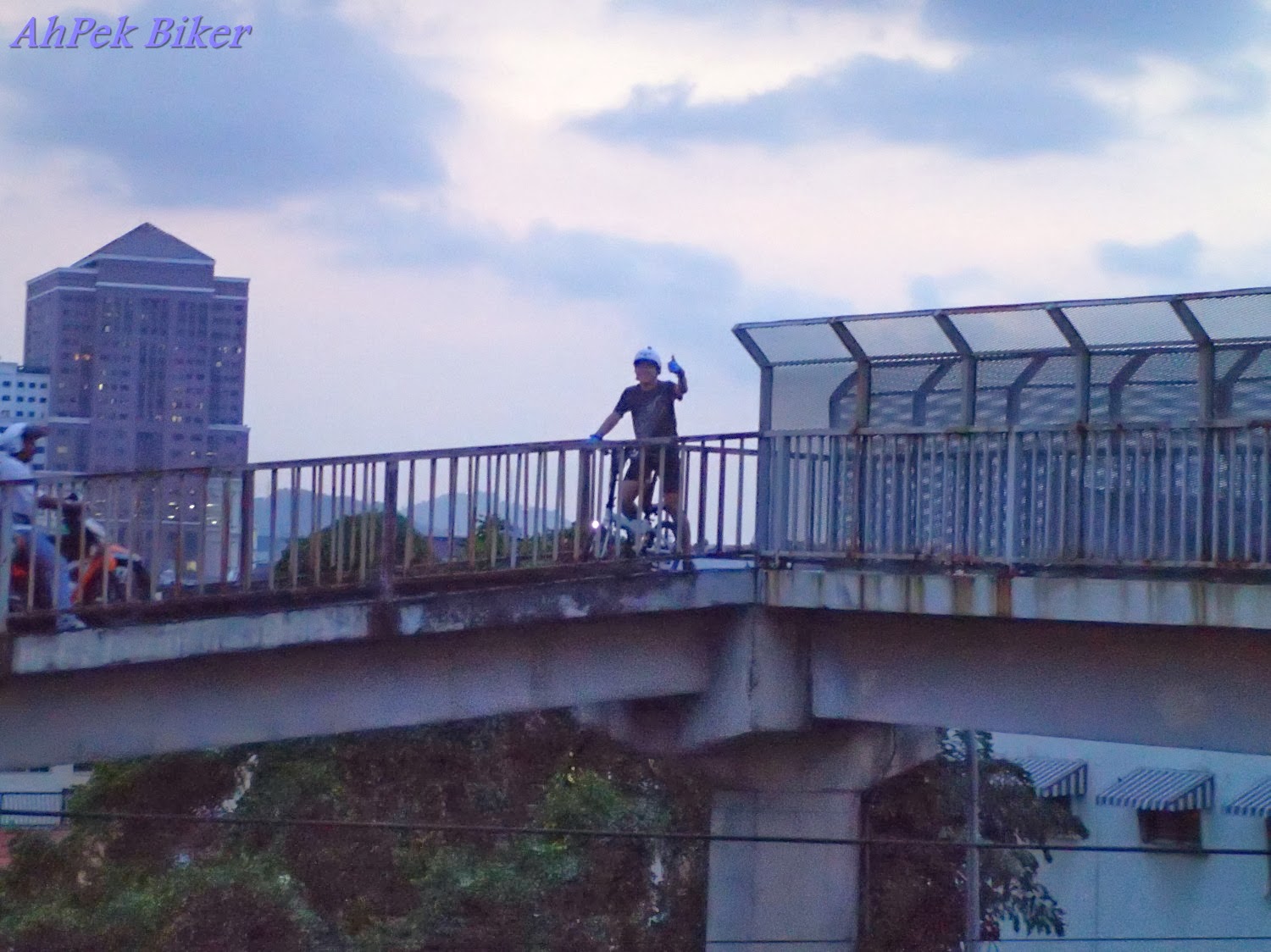 ... then up and across a very high pedestrian/motorcycle-bridge that span above the railway lines. Harry's at the top of this bridge, looking great silhouetted against the evening sun. 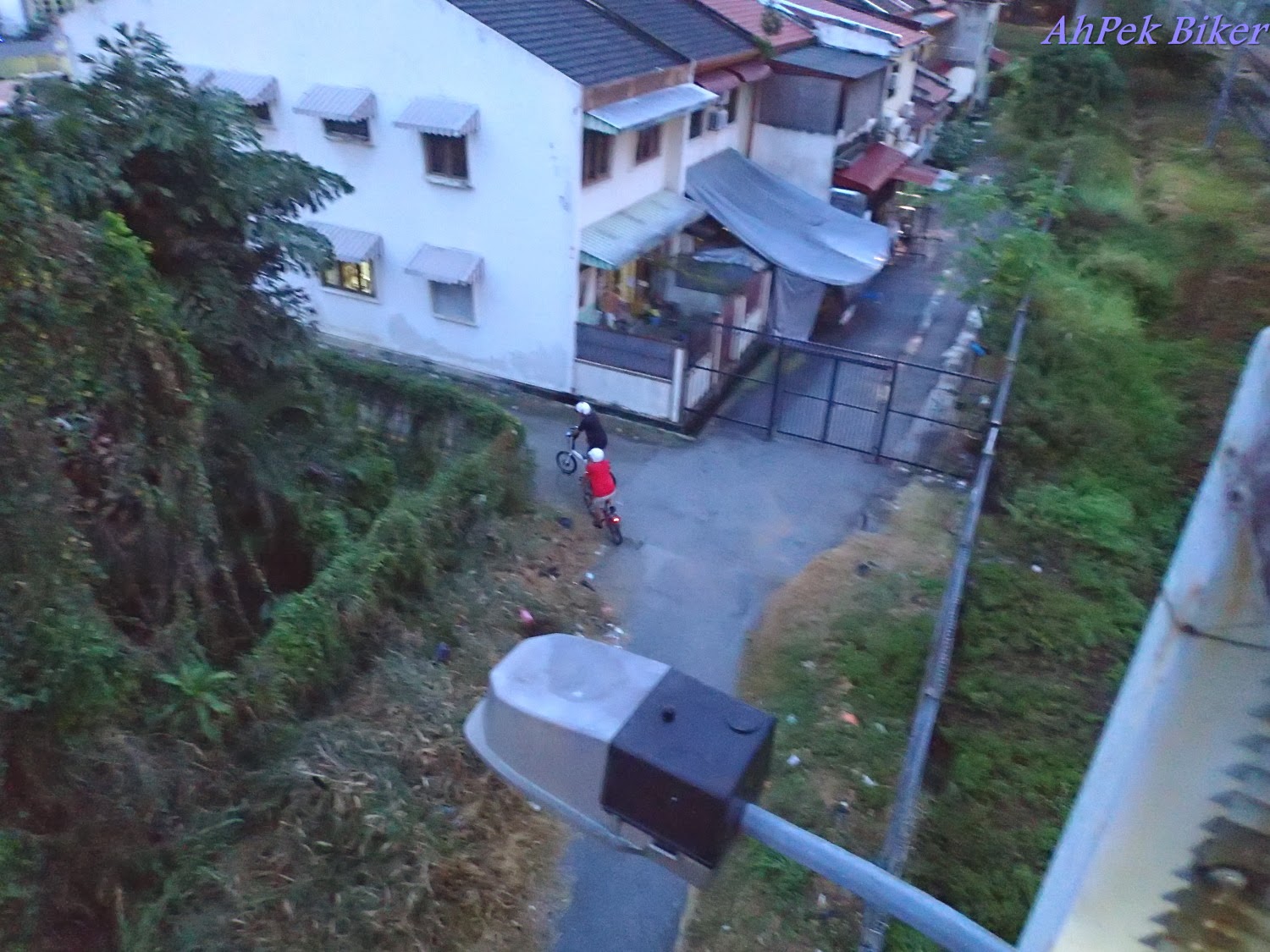 Spanning across the railway lines, this bridge is pretty high. From here, my cycling buddies who have reached below looked so small. 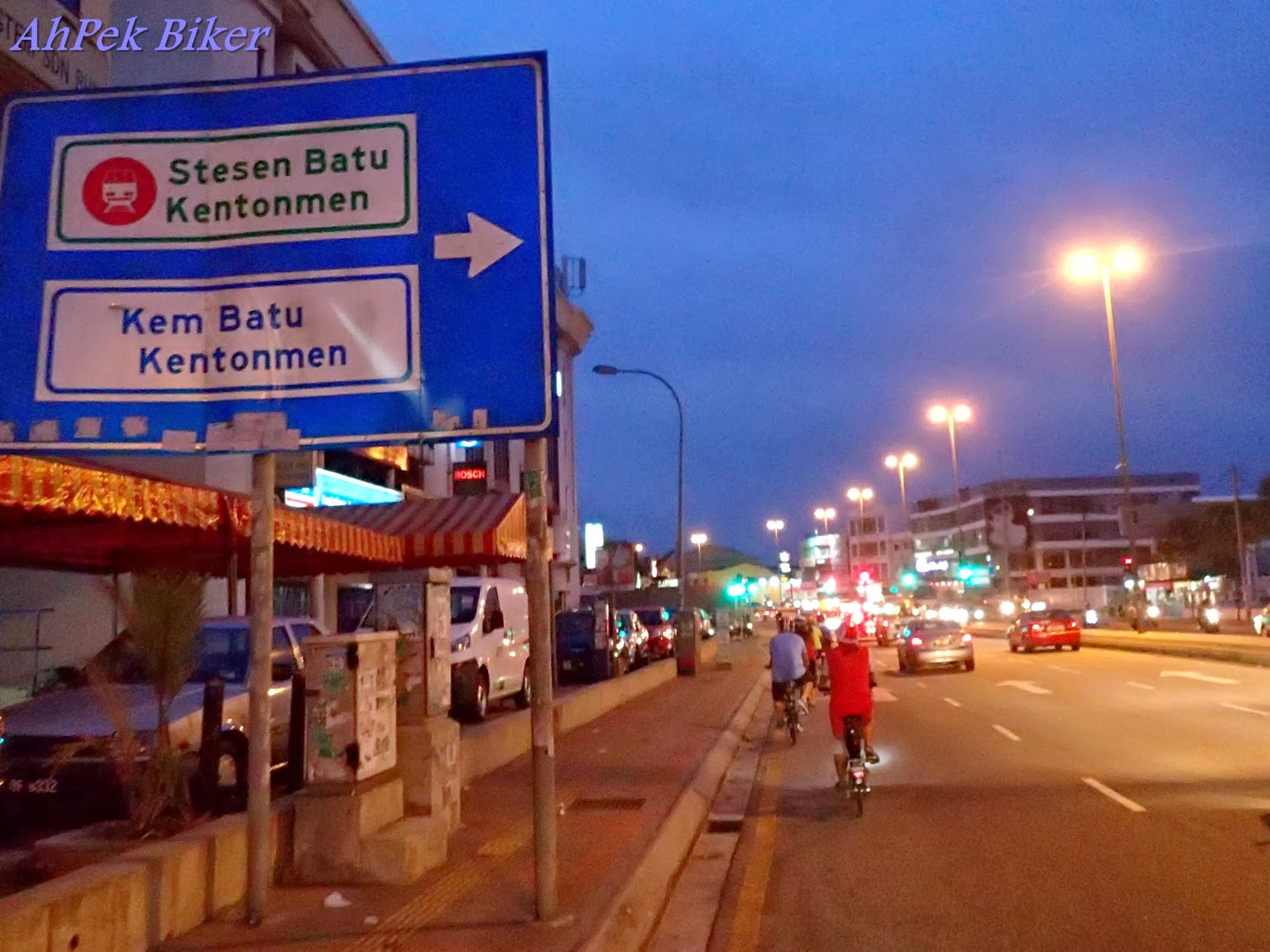 Just like that (like magic), we are back at Jalan Ipoh, but now almost at it's tail end, at the Batu Cantoment area. 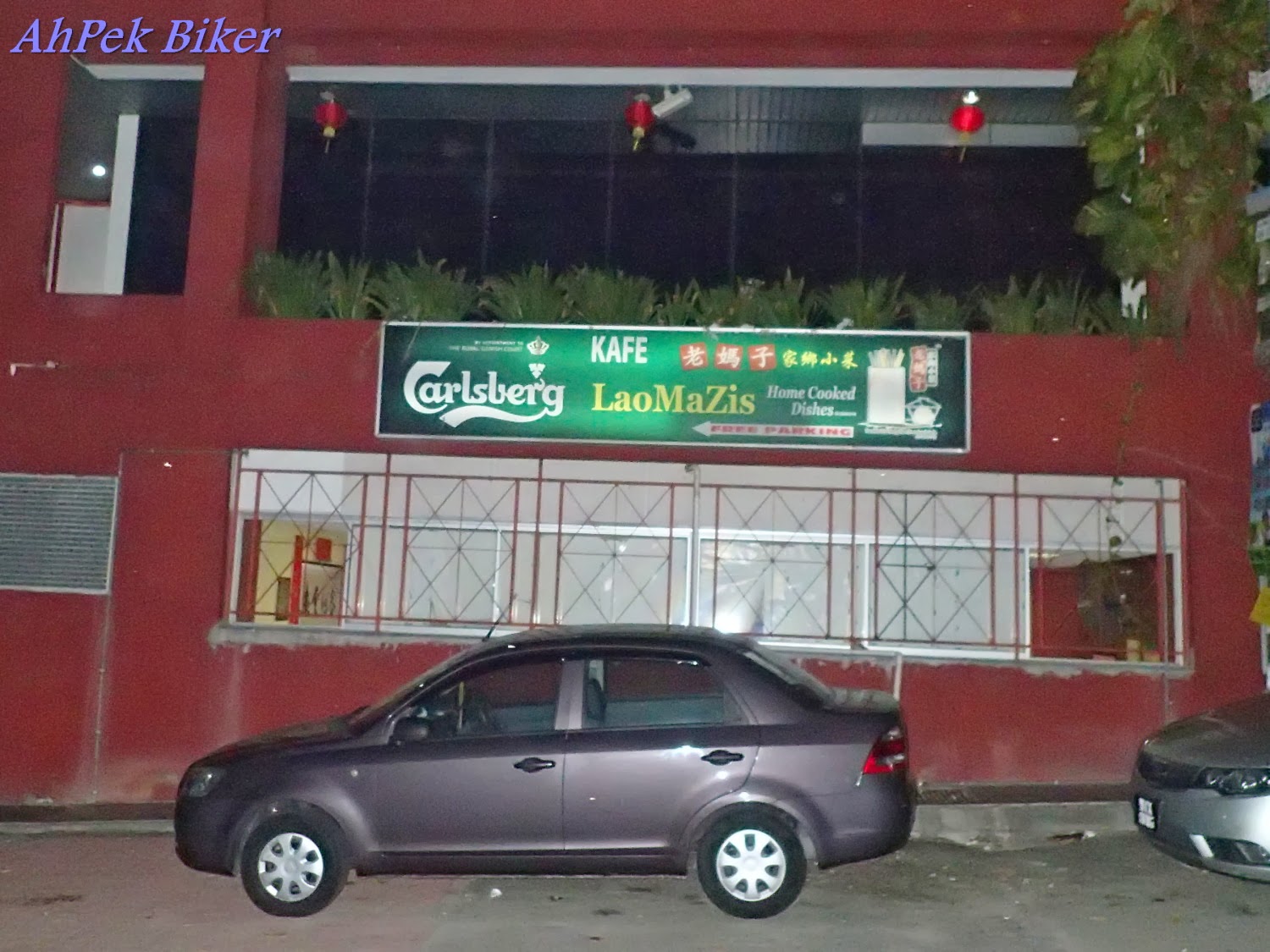 7:46 pm - After more than an hour and a half of cycling a round about route of more than 15 km., we reached our dinner destination - the LaoMaZis Cafe. We were all definitely having hearty appetites for the delicious food served here. 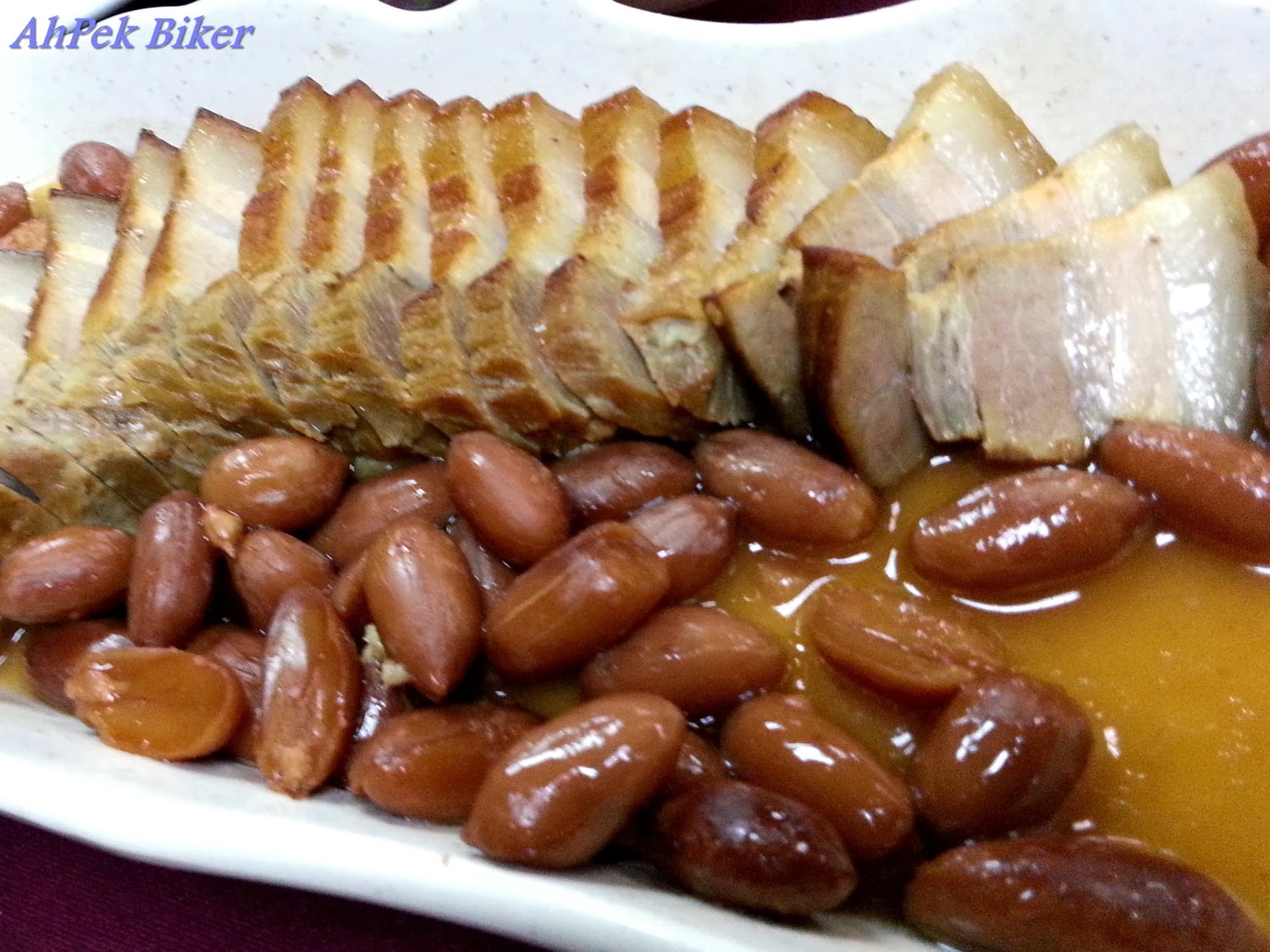 This is the second time we are eating here. Among the dishes we ordered was our favourite, the Smoked Pork Belly With Boiled Ground-nuts. 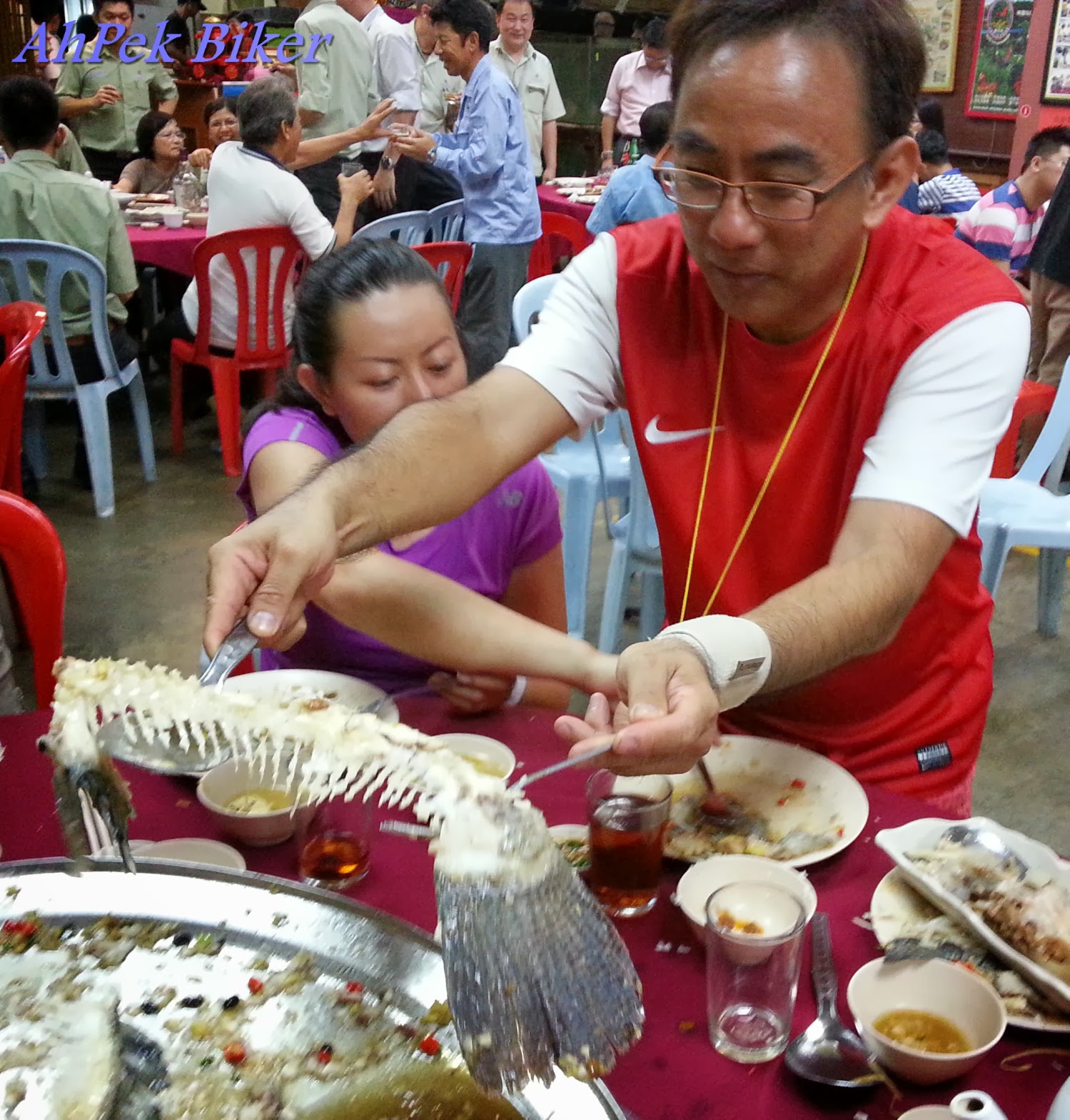 And a huge 3 kg. Tilapia fish which Chris helped decimated down to the bones. Even nothing of the fish's head is left!
(... see more at LaoMaZis blog). 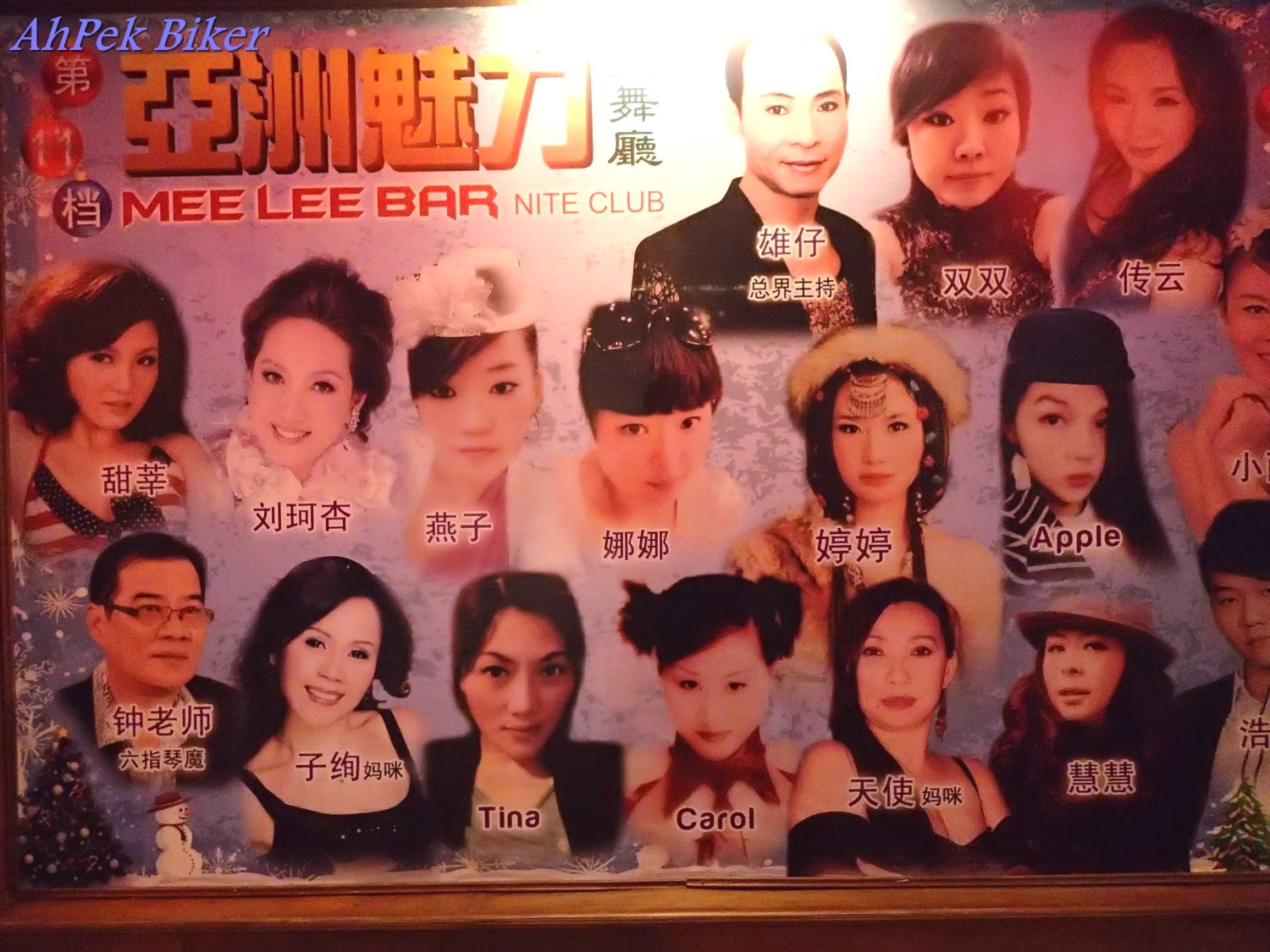 Our route back will be a direct one, a much shorter one of only 8 km. Remember Mee Lee Bar that we passed by earlier? It is also where we took the group photo that appears right at the top of this blog.
Mee Lee Bar is a night club. Nope! We cyclists were not attracted to the night club scene; we were more attracted to the classic Shanghainese style poster showing their performers at the front of the club! 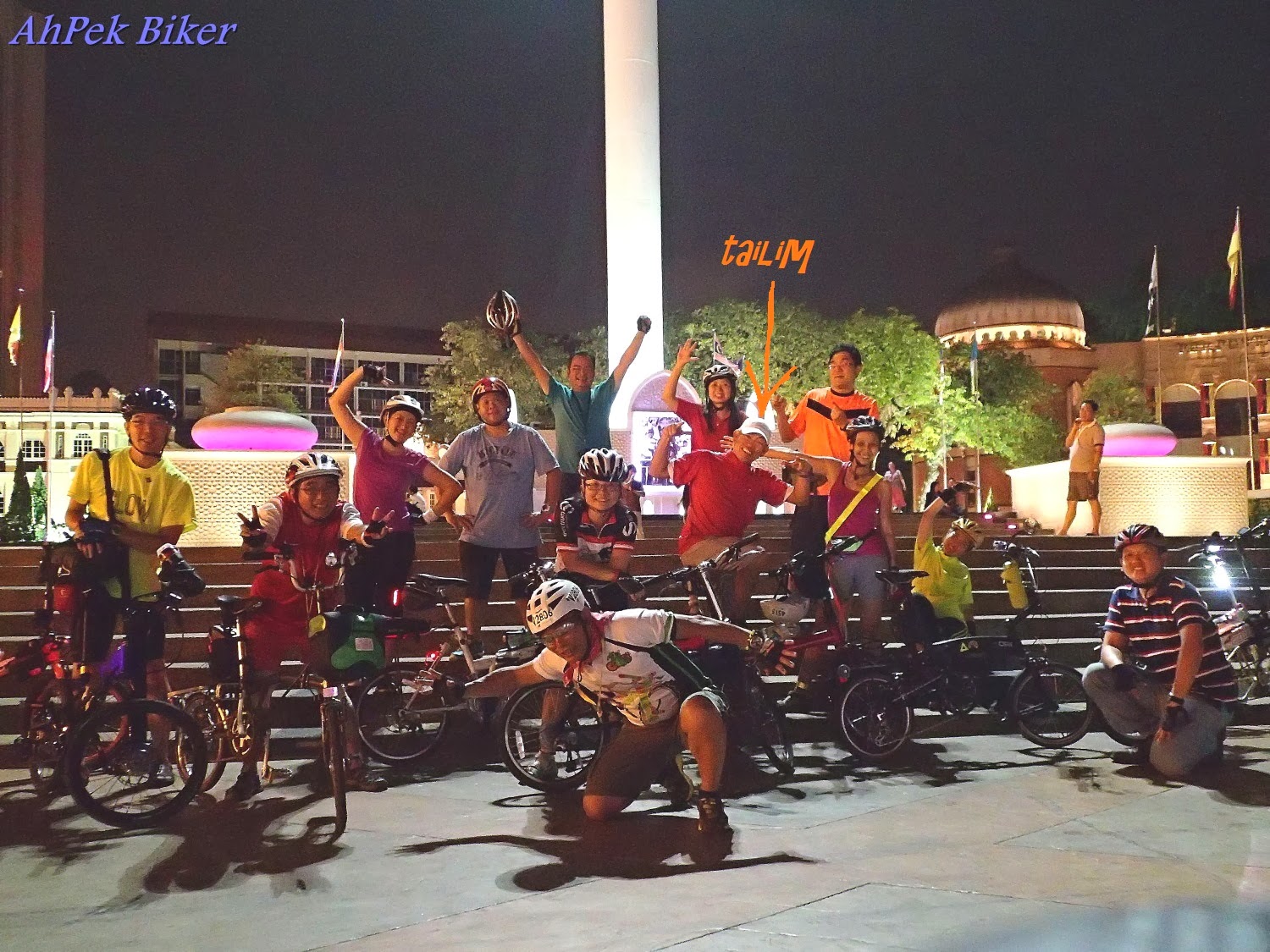 Tailim has taken up to the hills of Bukit Tunku, across rivers, under and over highways, through bus depots and over railway tracks. Along the way avoiding the highways and busy main roads as much as possible. It is a route that not many will know how to traverse by themselves, where a seasoned rider as a guide will become handy. He truly deserves the title of the Master Urban Cyclist given to him (... see Old Is Gold article by BaikBike.Com).


You are at - Jotaro's Blog / AhPek Biker / Cycling Malaysia / Kuala Lumpur / Ushering In Chinese New Year 2014 Ride
(comments most welcomed below. if you like this pls share via facebook or twitter)
Posted by Jotaro Zen at 7:50 AM