Pahang: The Raub Diaries Pt. 2 - Cycling Cheroh To & Around Raub 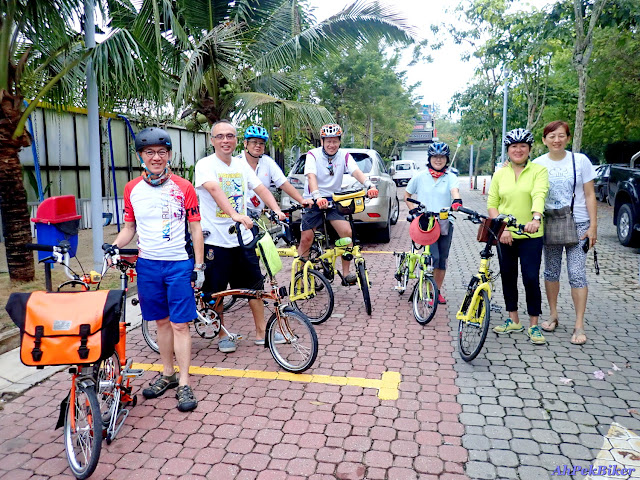 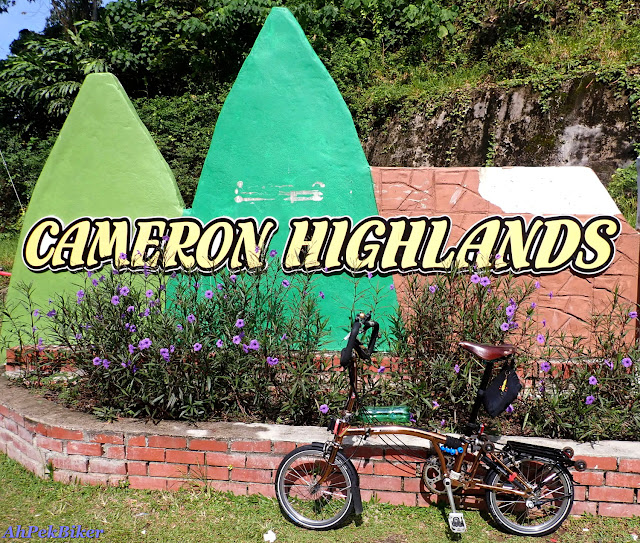 The previous day we had cycled 129 km., coasting down from Tanah Rata to Cameron Dam via Ringlet before taking on the challenge of the many dragon-backs leading to Cheroh on the outskirts of Raub. Most of us did not complete the ride, only Richard (our hero, whom we now call Mr. 129) persisted to complete the difficult route under a hot glaring sun.
Today will be an much easier route to explore the surrounding villages.

Cycling Distance: 27.39 km.          |          Level: Medium
The route goes through gentle undulating slopes leading to the villages of Sungai Lui, Bukit Koman, Sempalit to visit some cottage industries before heading back.
(Zoom out to see our dinner place, etc.) 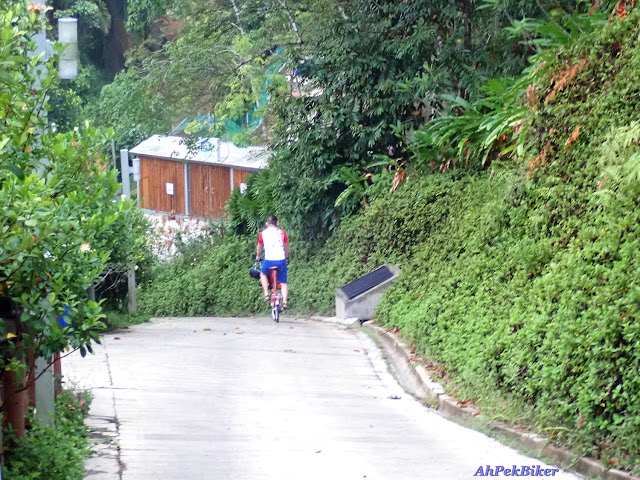 7:30am - We rode down the very steep slopes from our chalets at Laman Pesonaa to their restaurant to have the inclusive breakfast. It was a simple breakfast, and nothing to shout about. But that's good as it means leaving our stomachs ready for better food in town. 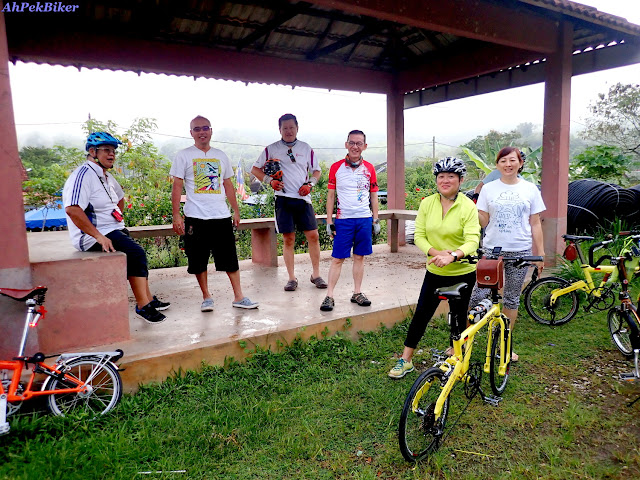 Six of us rode out heading for Sungai Lui; Richard (Mr. 129) had had enough cycling for the trip after his yesterday's arduous trial. You must be wondering why I am posting a photo of us at this bus stop Taman Amalina Perdana (GPS: 3.83602, 101.83130). This bus stop is of not much consequence, but a dirt track lane opposite it led to a durian collection centre, and Richard hastily drove in to satisfy his craving for this King of Fruits! 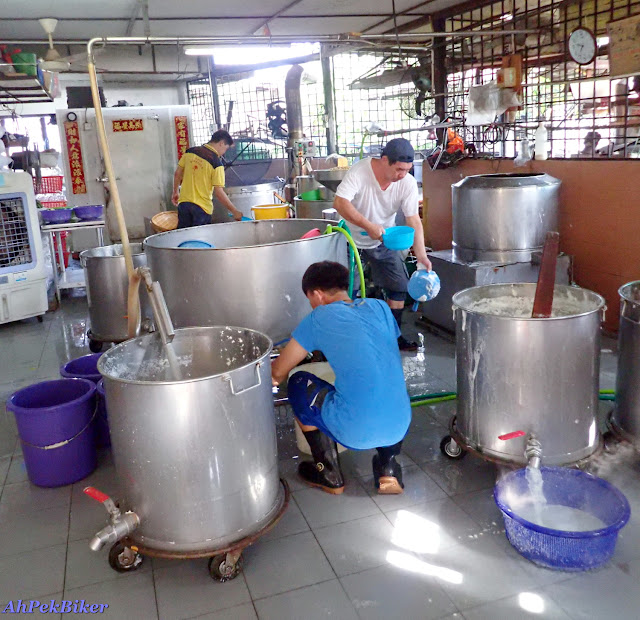 Our first destination: the Chai Tofu Factory. This place makes soft tofu and tau pok and which are well know in the Raub district. This cottage factory is located at an end lot single-storey terrace house, and they maintain good cleanliness in their production. Most of their preparation and cooking equipment are stainless steel, at the far end right corner is a commercial fryer for deep frying tau pok ( we will come to more of the tau pok later).
They are quite used to tourists visiting them and continue on with their labour without blinking an eye. In fact they take advantage of the many visitors and have bottles of cold soy milk to be sold. 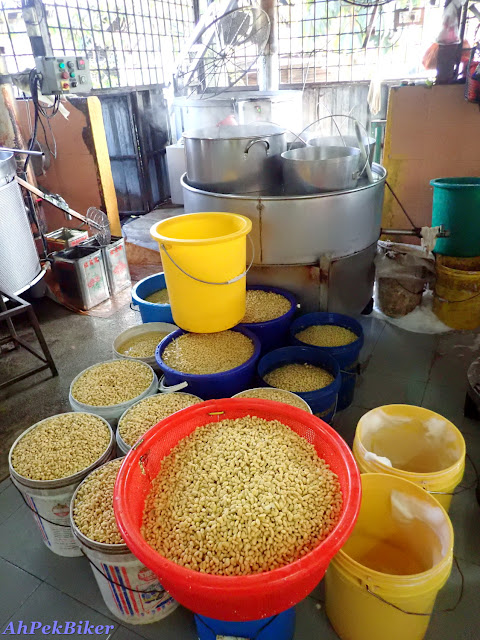 Let's look at their production line; first soy beans are cleaned and soaked in water overnight. These are then put into a large grinder to be ground with water; the milk that comes out is collected and then cooked in a huge steamer. Some of the cooked soy milk is sold as drinks; some of it has calcium carbonate powder added as a emulsifier to curdle them up into a curd. This curd is used to make tau kuah (soy bean curd) by putting them into a tray and the water pressed out. 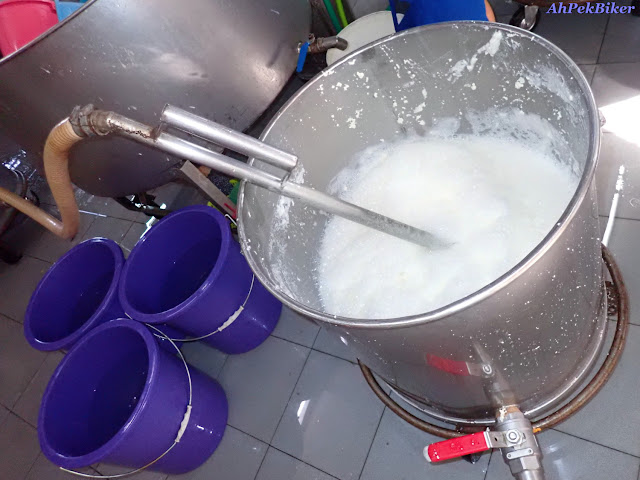 Others had less emulsifier added so that they are less solid. These are put into another large bucket where air is blown into them so that the result is an aerated curd. 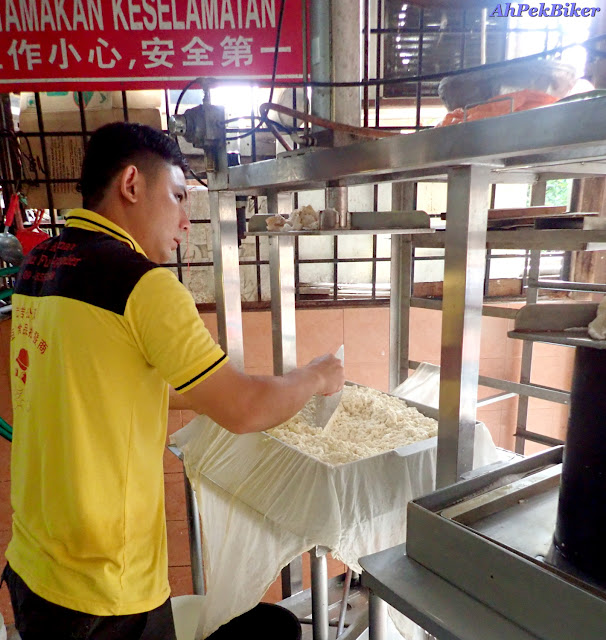 They aerated curd is put into another deep tray lined with cloth (this is the same process for tau kuah, except the tau kuah curd is not aerated). The mix is then covered with a clothe and a flat tray put on top, and is transferred to the next table (part of it can be seen on the right of the above photo) where a press is screwed down to squeeze out the water. 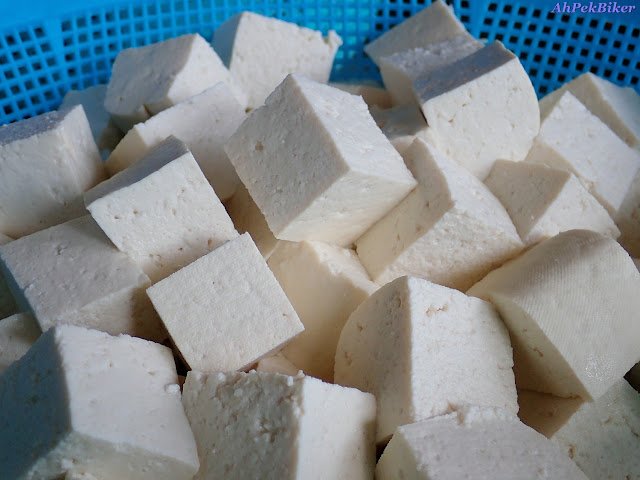 The solidified curd is then cut into cubes. As can be seen above, these have small pocket of air in them; they are then deep fried in the large fryers. 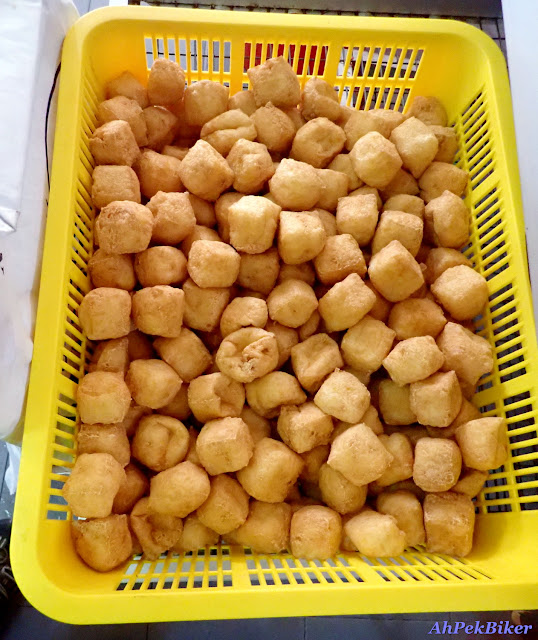 The "finished" tau pok; note the deep frying is a light one, just long enough to brown the skin and cook the inside fluffy without making outside crispy or crunchy. Tau pok with it's spongy absorption is used in many dishes - soups, curry and even filled with fish paste or minced meat for Yong Tau Foo. 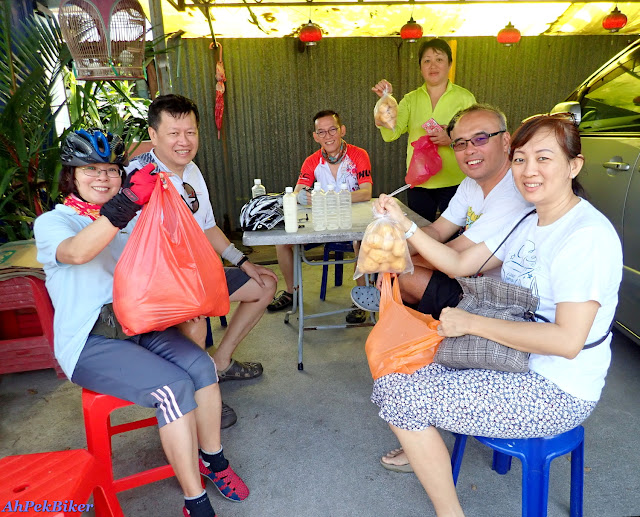 Here we are at a visitors' shed opposite the factory, having our drinks of soy juice and showing off the packets of goodies we bought. 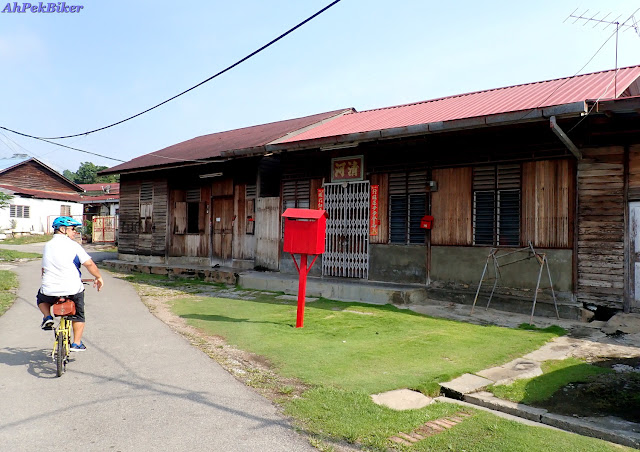 Our ride in this area took us around the narrow roads passed many wooden houses. The community here is of Hakka descent and their houses reminds me of another Hakka village that we visited during our ride to Mantin in Negeri Sembilan. Unfortunately that one was being torn down for modern development; I hope that this one will be preserved for a long, long time. 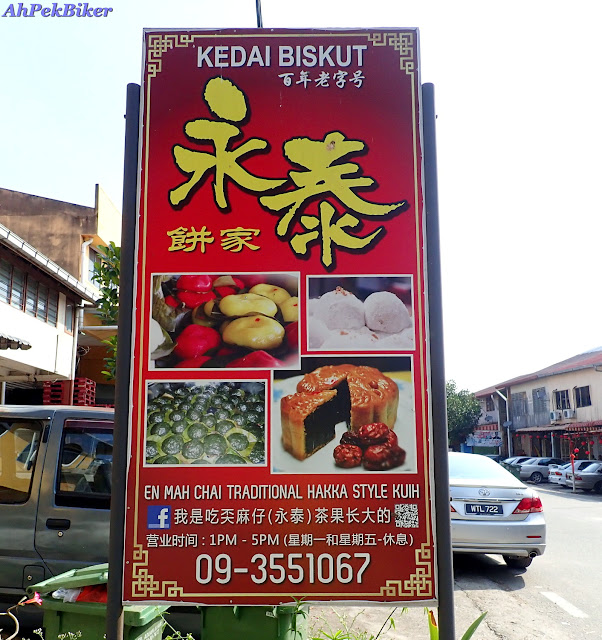 10:00 am - We rode over to Jalan Bukit Koman, the small commercial centre of the village, hoping to visit the Hakka Kueh Factory and see how they make these delicacies and perhaps buy some. Unfortunately, they are only opened at 1:00 pm, so we had to be satisfied with just looking at some of the photos they posted up on their signboard and then head for our next destination ..... 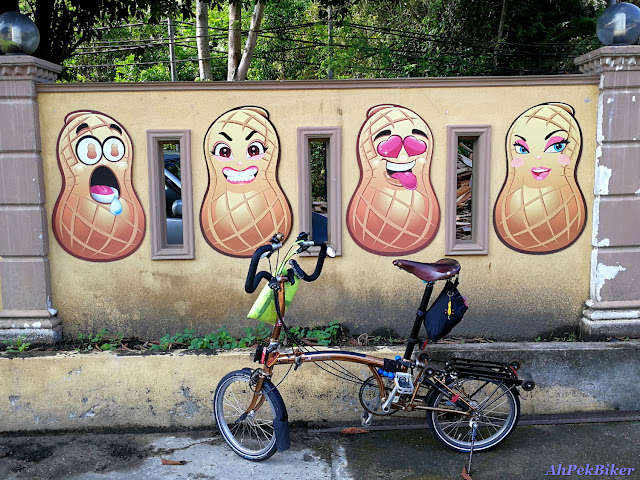 ..... in Sempalit, the Sinn Loong Ground Nut Factory. Goofy's very comfortable here parked at the large compound where the perimeter walls were painted with cute cartoon groundnuts characters. At the foot of the wall was a planter box planted with groundnut shrubs. 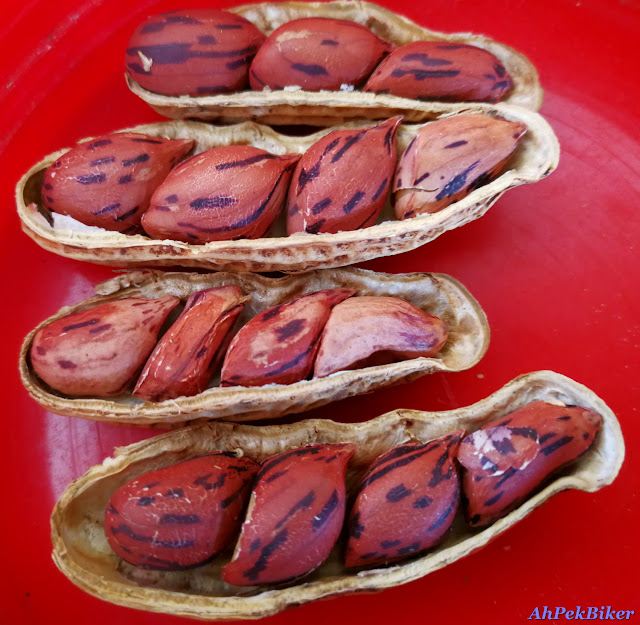 They manufacture ground nuts here, they are several types and the renown one is the Tiger-striped which is distinct as it has stripes on the skin. In Malay they call it Kacang Batik Lemak Manis as the stripes form some sort of batik pattern and taste-wise, it is creamily sweet. 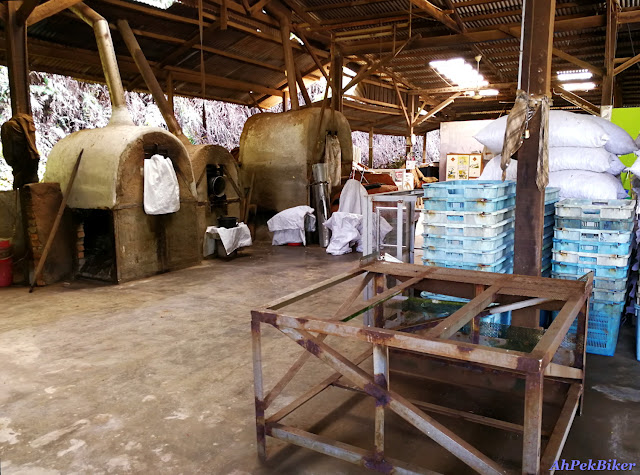 The family has been producing groundnuts for three generations, starting with the grandmother making the groundnuts for their own family consumption, then just for neighbors before blooming into a full fledged cottage industry. Initially they planted their own groundnuts at farms nearby, but these days it's more lucrative to plant oil palms. So there goes the groundnut farms, and nowadays the nuts are imported from China, Vietnam and Cambodia. Back in grannie's days, she used to fry the groundnuts in sand after they have been sun-dried for several days. These days the frying has been mechanized, but the old wood-fired brick ovens are still in used. 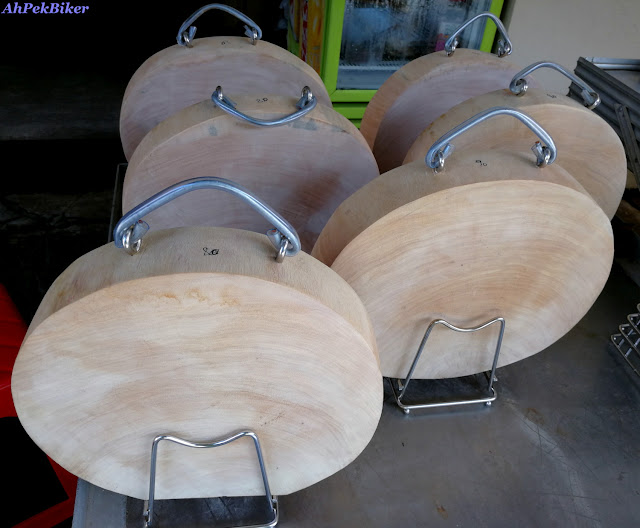 Other than the groundnuts, they also sell other snacks (from other manufacturers), some local knick-knacks. What drew my attention were these wooden chopping blocks made from Tembusu wood. Tembusu is a fine grained and very resilient and the trees are not attacked by termites or weevils. But loggers and saw-millers deign to handle this wood as the sawdust can cause itchiness or rashes. That's why these chopping blocks are not cheap, selling here for RM80 to RM90; at the wet markets in the city they would probably be even more costly. 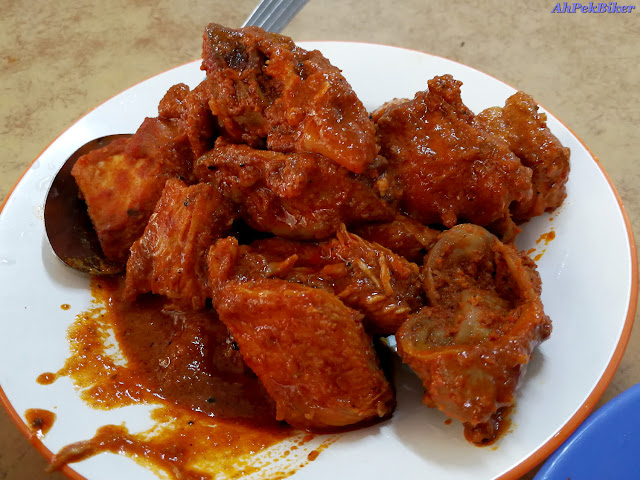 We rode back to the hotel, checked out and loaded our bikes up the support cars. The light breakfast and missing the Hakka kueh had made us hungry fast and we were looking much forward to renown Raub Chicken Curry at our next destination, Restoran Damodaran Nair. Unfortunately, some other hungry soul had bought all the curry chicken for a function and we had to make do with this chicken rendang which tasted quite good too, with adequate spices and moderately chilly hot.
The operators of this restaurant originated from Kerala, so their curries were towards the Keralan style instead of the normal Tamil Nadu style found in most other Indian restaurants in Malaysia. 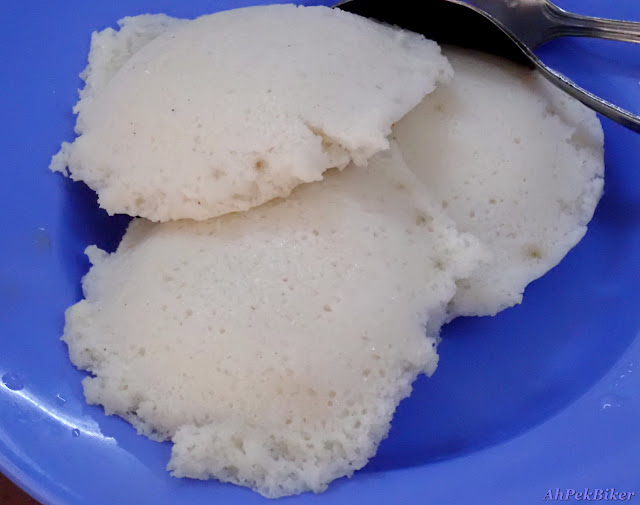 Other than the chicken, we had several other curries to go with white rice and also the above Indian pastry called Idli. It's a type of savoury rice cake, popular as breakfast foods throughout India and northern Sri Lanka. The cakes are made by steaming a batter consisting of fermented de0husked black lentils and rice. The fermentation process breaks down the starches so that they are more readily metabolized by the body. 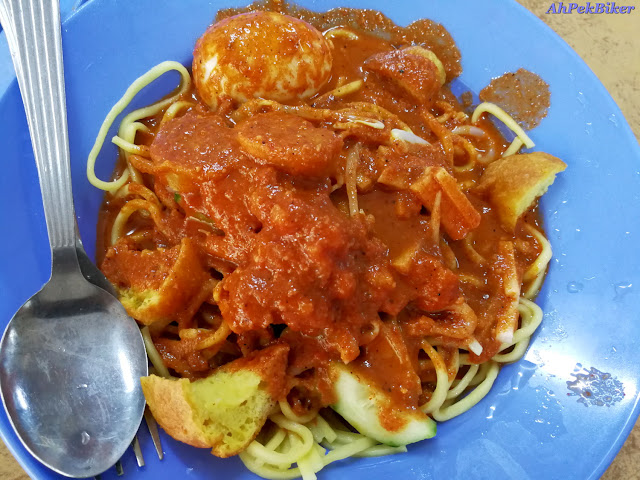 We also had some pasembur and pasembur noodles. Pasembur is a Malaysian Indian salad usually consisting of a combination of some or all of the following: shredded cucumber & turnip, sliced potatoes, beancurd, bean sprouts. Sometimes prawn fritters, spicy fried crab, fried octopus or other seafoods are added too. It's served with a sweet and spicy nut sauce. It is also called Indian rojak.
It was a simple yet good meal and we left with me wishing them "Naning". It means thank you in Keralan, I had remembered this from a trip we made to Kerala a few years back. Heh heh.... 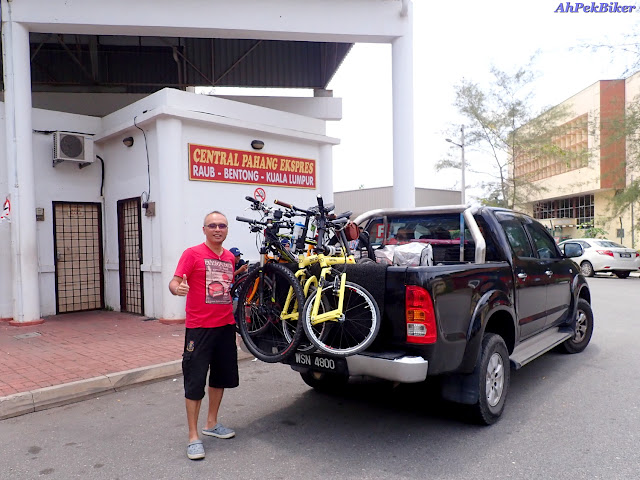 Richard and Thomas dropped us at the Raub Express Bus Terminal, wishing us goodbyes before heading back to their hometowns.
We took the 3:00pm Lin Siong bus to Tanah Rata to collect our cars which we had parked overnight there. The two-hour bus route trace back the exact same roads that we had cycled the previous day. Riding the bus the roads seem to be gently sloping upwards. Haha... you are right Wong; when driving the topography perspective can be misleading. 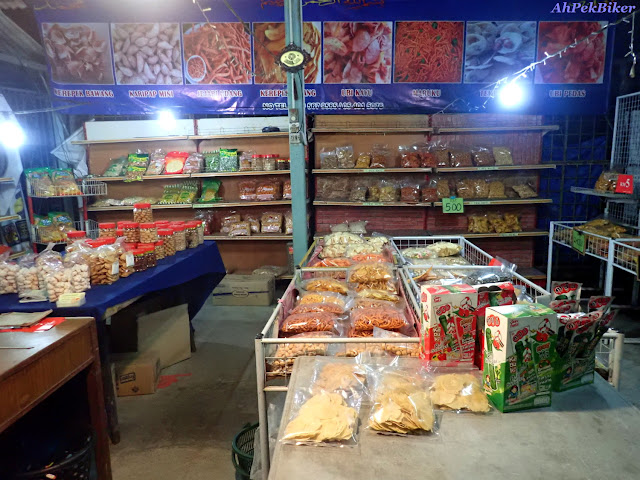 We collected our cars and said more goodbyes, this time to Wong and Lilian who will be heading north via Simpang Pulai, while Tan and me headed south via Tapah.
At Route 59, near the Tapah toll plaza, we passed by a brightly lit bungalow with large banners advertising "Keropok" in huge letters which prompted us to make a hasty U-turn to see what they have. It was the KZ Aneka Kerepek Shop AND they did have a very wide range of keropok (deep fried fritters) of different types from both Malaysian and Indonesia. Their keropok includes those made from bananas, tapioca, mung dhal, peas, etc. 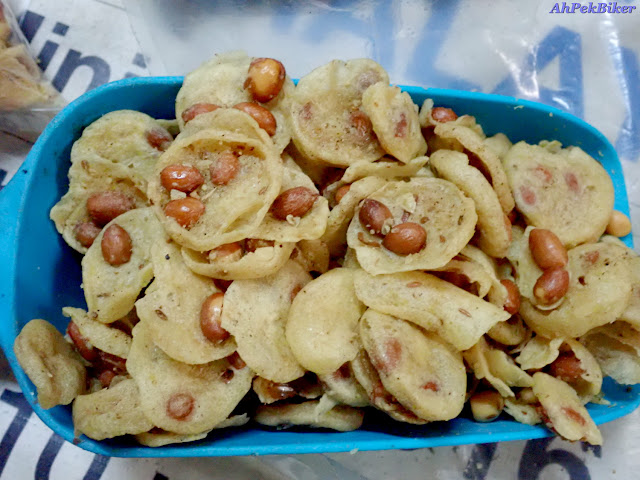 We got this groundnut-anchovy keropok. They are smaller than the usual version with just a little dried anchovies so that they are not that salty. The best part is that the pastry was crunchily munchy. 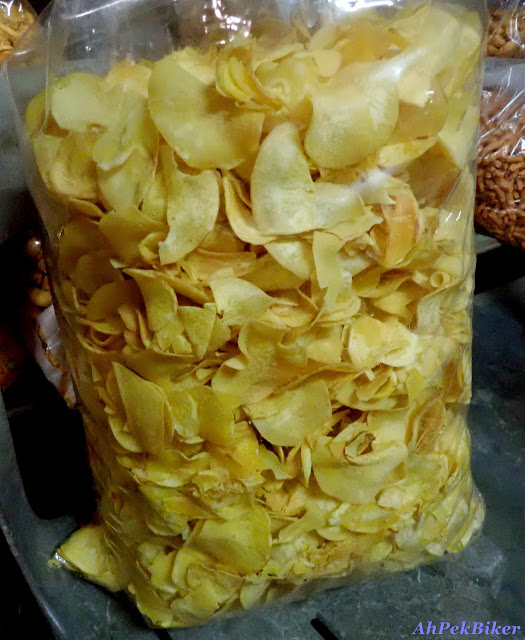 This one made from Pisang Tanduk (Horn Banana) which are huge sized up to a foot long and curved so that they looked like horns, hence the name. We found this to have a better taste and an easier bite than those keropok made from smaller bananas. 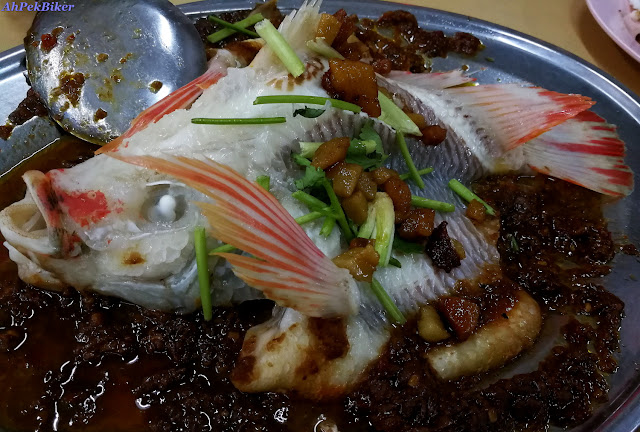 9:15 - The highways were jammed with tail to tail traffic. It's the Qingming Festival (Chinese All Souls Festival) and many had gone back to their hometowns pray to their ancestors.
We decided to have dinner at Restoran Sing Seng Kee at the southern end of Tapah town and hope that after that traffic would have abated. It was not to be, our drive from Tanah Rata to Kuala Lumpur would take us four and a half hours (excluding the time for dinner) instead of the usual hour and a half.

Long jam or not, tough ride and all, it was a very good weekend that stretched our cycling limits, and took us to some interesting places too.
Many thanks Wong for another good ride, tough but memorable.

You are at - Jotaro's Blog / AhPek Biker / Cycling Malaysia / Pahang / The Raub Diaries Pt. 2 - Cheroh To & Around Raub     |     Go to Pt. 1
If you like this, view my other blogs at Jotaro's Blog
(comments most welcomed below. if you like this pls share via facebook or twitter)
Posted by Jotaro Zen at 2:07 PM