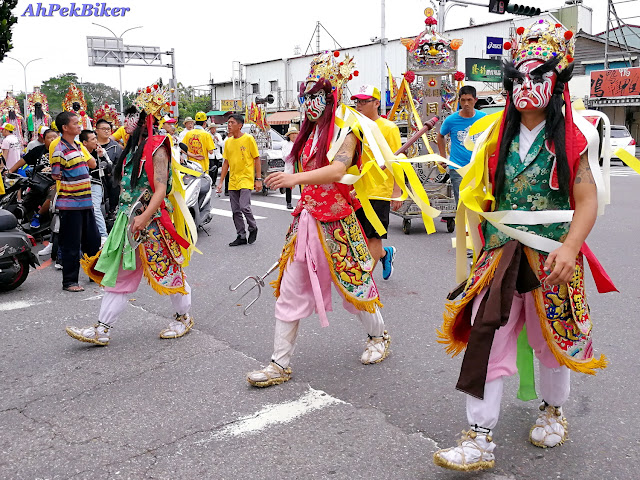 Route Recommendations :
1. Traffic Directions!
The Taiwan (台湾) is left-hand drive, so cycle on the right. Same thing applies when crossing the road, take note of the direction in which traffic is approaching from!

2. Route & Traffic Conditions
The route flat and mainly on Freeway 1 of Taiwan's National Highway. Click here to download a PDF guide on Cycling Around Taiwan. Although a busy highway, there were dedicated or shared cycling lanes to ride on.

3. Weather
The weather was hot, averaging at 29°C during the day (with not much cloud cover) and 24°C at night. Wind speed was fair, averaging 16kph with gusts up to 23kph.
It is always prudent to check the weather for the next day so as to know what to expect and be prepared for it. Useful weather forecast sites for the Taiwan are the Taiwan Central Weather Bureau and AccuWeather. For more detailed weather, including cloud cover and wind speed, use Weatherspark and Ventusky.

7. Travelling By Trains And Bringing Bikes Onto Trains
Folding bicycle are allowed onto most trains (express, local and metro trains) but must be bagged before entering the platform, and only unbagged after leaving the platform. Unbagged folding bikes (and full-sized bikes) will usually face a charge equivalent to 50% of the fare. Do note that at smaller stations there are not lifts or escalators for getting to the platforms, so do expect some carrying across bridges or underpasses. A few stations do provide bike-way for pushing across the tracks, do look for signages indicating these; but use of them is subject to the station master's discretion on safety.
For more details on charges on bringing bikes onto the different trains (local or express trains) click here for the Taiwan Railway Administration (TRA) Guide On Carriage of Bicycles.
Click here for a link to the Taiwan Railways Administration (TRA) website for booking train routes and fares; and also to see which railway line totally does not allow bicycles on board.
Click here for guidelines on bring folidng bikes onto the Taipei Metro.
Train services are quite regular between larger towns, but at smaller towns services may not be that regular (perhaps like every two or three hours). Do check at the respective stations for the train schedules or at this TRA booking site link.
Fares for our van and train rides per pax:
- Van from Sun Moon Lake to Shuili = NTD54.
- Shuili to Ershui = NTD77.
- Shuishang to Tainan = NTD 80.

8. Communicating with Each Other
When travelling in a group it's important to be able to communicate with each other, especially if one got lost from the rest.
At Taipei Taoyuan Airport Terminal One, just after exiting the into the arrival hall, there are several booths on the left selling pre-paid phone SIM cards. We got pre-paid 4G prepaid SIM cards from Chung Hwa as they had good coverage even in remote areas. These cost NTD1,000 for a 30-day plan that includes unlimited data and NTD$430 credit for texts or calls. These can also be booked on line.
Those without sim card could try using free Wifi that are sometimes available at the airport, some bigger train stations or hotels; do note that these free wifi may not be stable and registration could be required.

9. Communicating with Locals
Most Taiwanese (台湾人) speaks Mandarin (官话) and Hokkien (福建話), and very few speak English. So it would be good to have a person in the team who can converse in Mandarin or Hokkien.
When communicating with locals is a problem, this could be partly overcome by using translation apps like Google Translate. Do install this app into your phone and before you leave on your tour do some basic translation as it will be saved onto a list of recent translations.
Look out for the tourist information booths at airports, railway stations or bus stations, the guides manning the booths speak good English and do give good tips on where to visit, directions, train and bus schedules.

Our two nights stay at Sun Moon Lake (日月潭) had been fruitful; we managed to ride round the lake and the following day visited the Formosan Aboriginal Culture Village to see native dance performances.
Today we are having an adventure of a different type; one mainly on trains as our journey from Sun Moon Lake to Tainan would entail a van ride, three train rides and somewhere in between a short cycling to visit a monument.
Little did we know that at Minxiong a surprised awaited us. 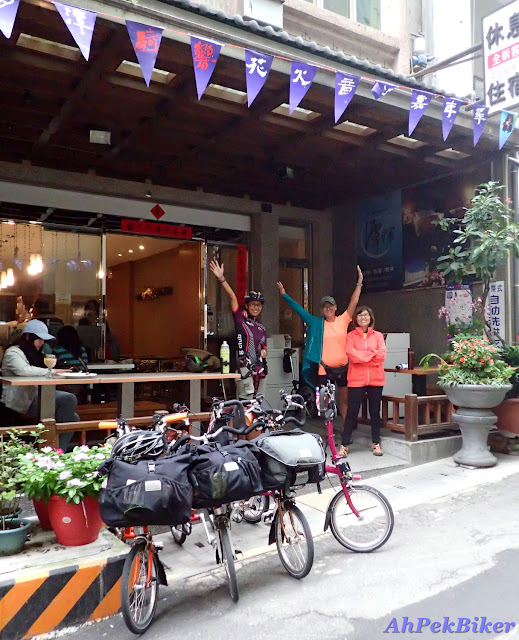 It's time to say good by to the scenic Sun Moon Lake after a hotel breakfast. It was a Western breakfast of eggs, toasts, ham and salad; our first western meal while in Taiwan, a good change after a week of local food.
We cycled over to the Shueishe Visitors Center... it's just a short distance not long enough to burn of our breakfast... Haha! We were hoping to catch a bus to Shuili, instead we got talked into taking a van by one of the glib operators. 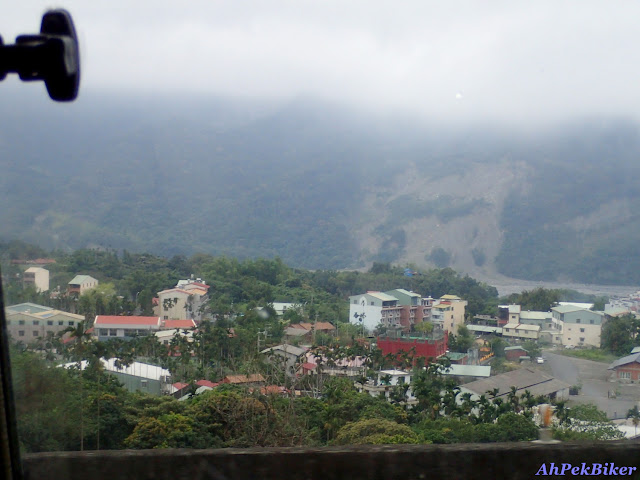 Thank goodness we took the van instead of cycling, the route down hill was with multiple sharp and steep bends. From the van we did get a good view of the valleys though. 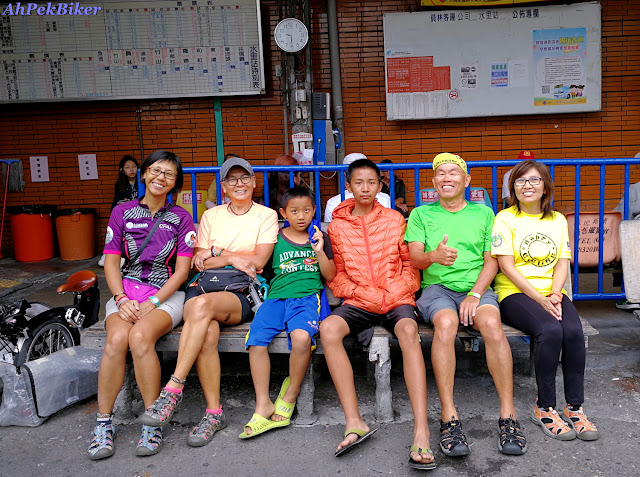 At Shuili, mingling with some local boys while waiting for the train. 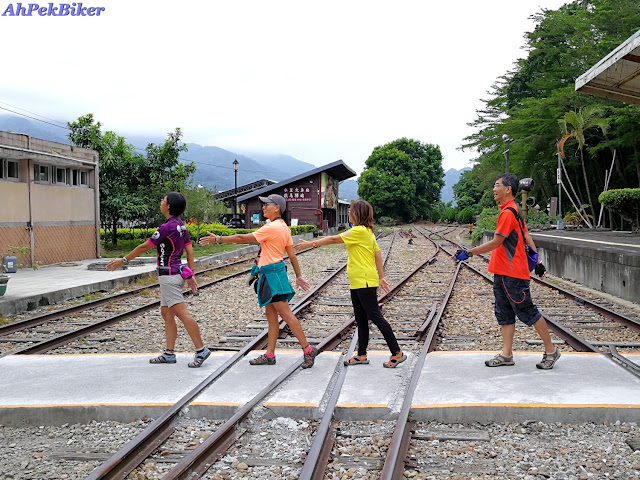 Shuili Station is one of those smaller stations that have a bike crossing over the railways tracks. Some other stations have such crossings too, just look out for a bicycle icon sign. The use of such crossing is up to the discretion of the station master though.
Here we are strolling across the tracks ala Beatles Abbey Road style 😍. 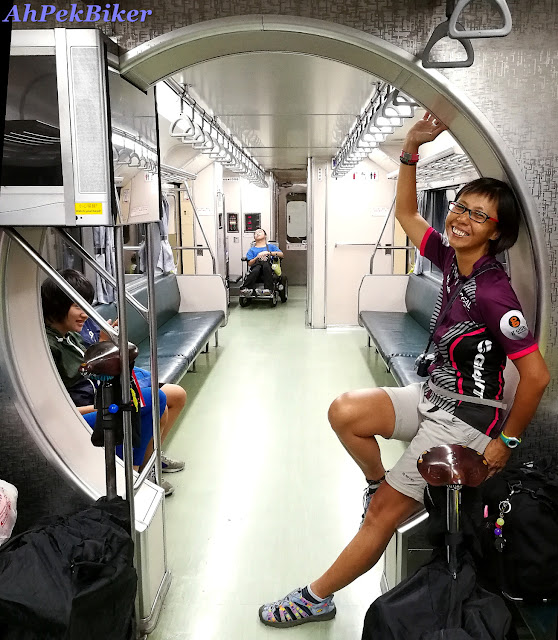 On board the train, Anne doing a cabaret dancing girl pose... Hah! No cycling so she's getting a bit bored! 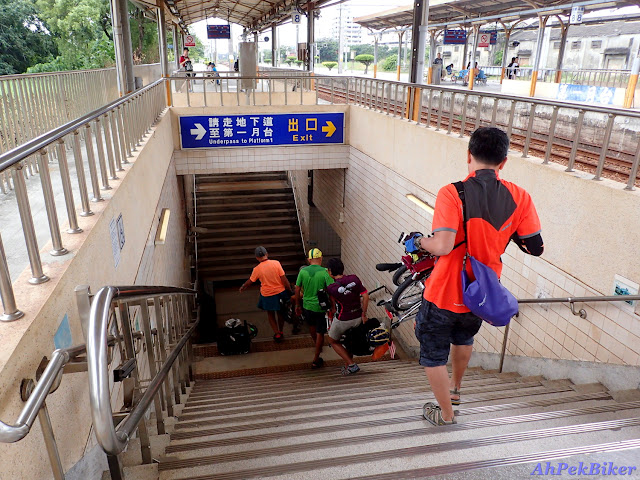 At Ershui Station we stopped to get a connecting train. Here comes the tricky part... at most small stations there are no lifts; and this one here don't have a bike crossing. So it's carrying our bikes and luggage down two flights of stairs and then up another two on the other side.... Puff! PUFF! 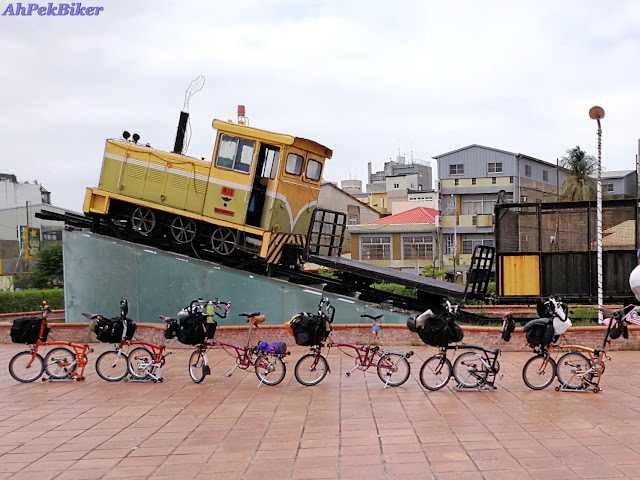 12:00 noon - Happiness! At Dounan we unpacked our bikes and got ready to ride! But first a shot of our bikes with a yellow locomotive in front of the station.... Sorry, no Yellow Submarine for more Beatles mania. 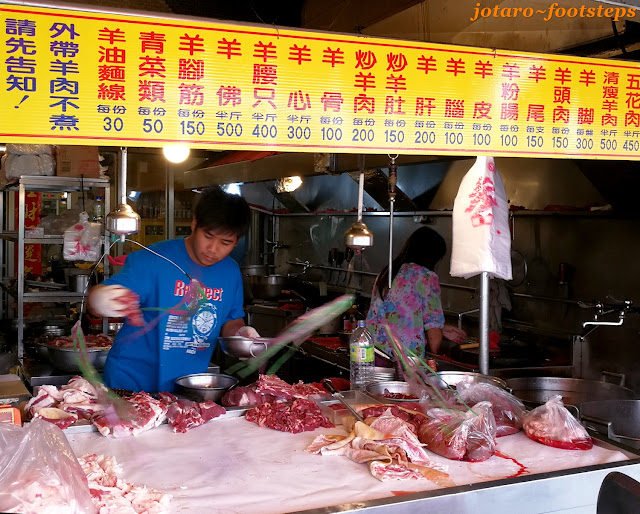 It was good to be cycling again... but then our stomachs were calling out "Heh-ku Pai-yoh!" That's a phrase we picked up from our Korean tours. Yup! You guessed it right, it means "I am hungry."
Not too far away we rode pass a lamb butcher shop thinking that it was odd that they were still opened at noon, way past marketing time. Hey! They are not selling to the housewives, they are selling fresh lamb for patrons of their adjacent restaurant. One can go to this stall and select preferred cuts for eating next door!


The restaurant is called 日日興現宰羊肉爐; which Google translate to "Lamb meat stove is emerging day by day" whatever that means. It's cuts of lamb from the stall cooked in a hot pot, slowly simmering it until the strong lamb flavor permeates into the soup. It's eaten with misua; pour the soup into a bowl of the misua and it tastes like heaven! 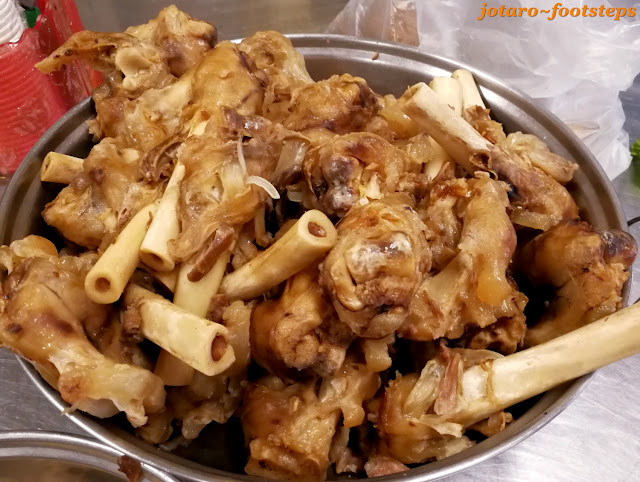 One of the side dishes served here were these lamb shanks. It's not to be put into the soup but rather eaten for the marrow inside. The restaurant provides straws for patrons to suck out the marrow... sounds a bit vampire-ish 😈. 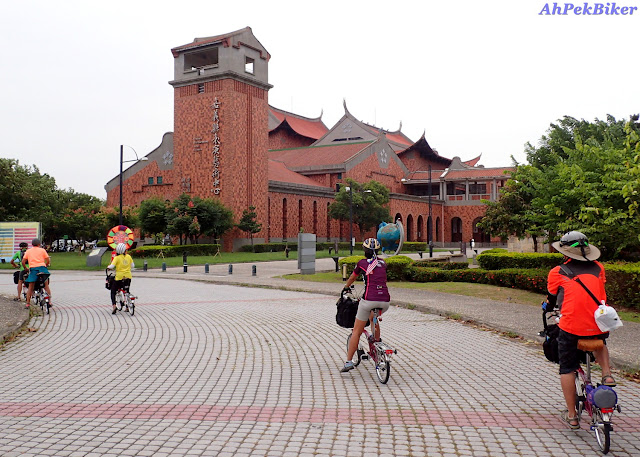 Up ahead is the Chiayi Performing Arts Center, It's a hybrid building with red western arches and Chinese roofs.
(Okay.. okay... we did not stop here, just rode by. I am just putting this photo in to show that we did do some cycling!) 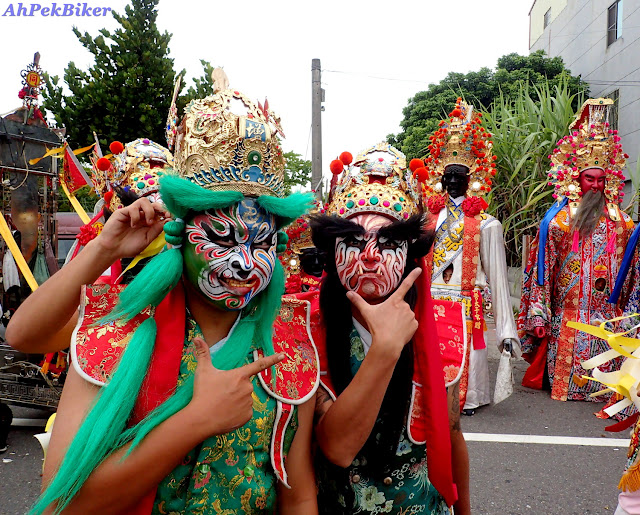 As we neared Minxiong, we saw a large crowd gathered in front. We thought an accident had happened; but the people were waiting for their turn to move in a procession. They were all dressed up in elaborate period Chinese costumes. Lucky us, we had caught the local version of a Nine-Emperor Gods Festival parade! These young guys even had colorful masks on. 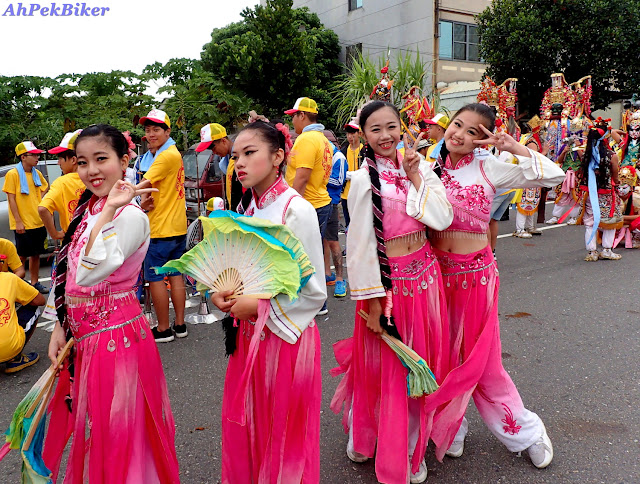 Next to them were these young girls dressed like ladies-in-waiting ready to perform in front of the emperor. 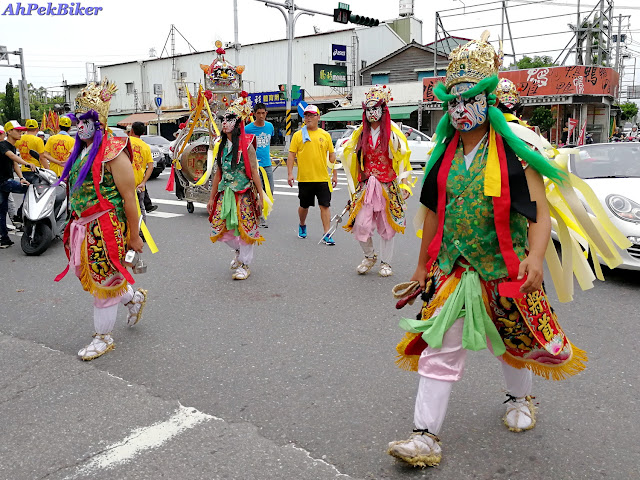 We were lucky that we were on bicycles and could follow the procession as it moved on; if we were driving then we would have been stuck as the parade occupied almost the whole width of the street. The masked guys are now looking more serious as they took part in the parade, no more smiles, no more happy finger greetings. 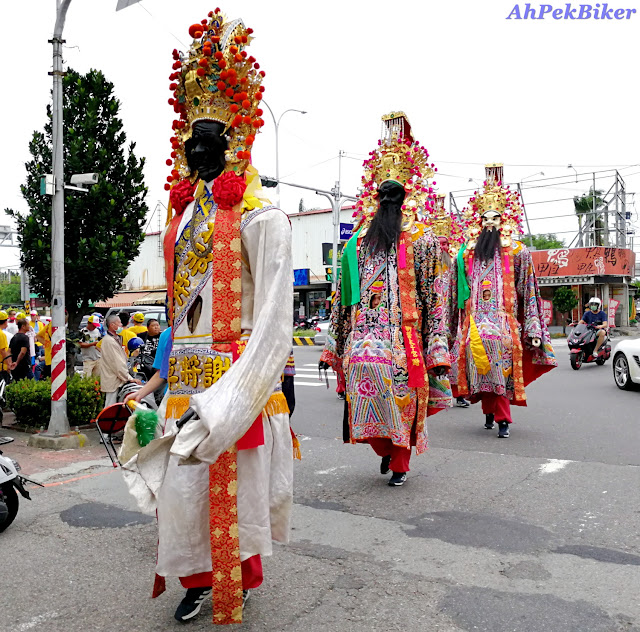 And these guys are even more somber, all black faced representing deities from the  Diyu (地獄). Chinese Hades. 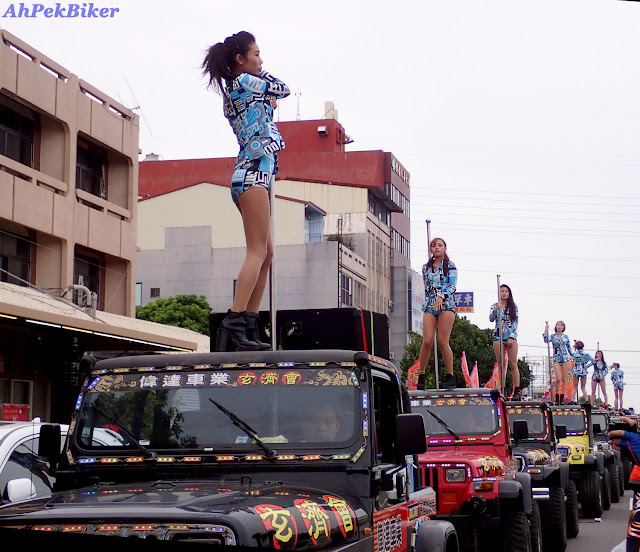 Then.... something more cheerful. Sexy girls in micro mini-skirts standing atop jeeps. Each jeep had a dancing pole attached to their roofs. Every once in a while the girls would break into a pole dance! 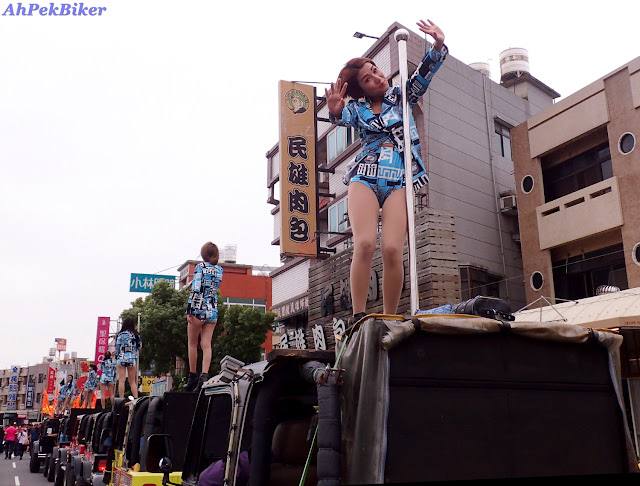 Smile and wave at them and they would gyrate even more sexily!
These contemporary days, pole dancers seems to be the in thing during parades in the country. They perform at festivals, weddings... and even funerals!


Here's a YouTube video on a procession with these pole-dancers to help you visualize better 😵. 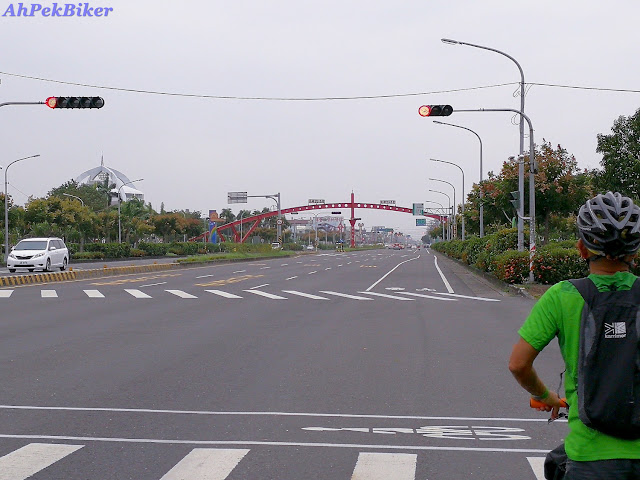 We left the costumed guys, the ladies-in-waiting and the pole-dancers behind. It's onwards to more serious things. Time to visit the the Tropic of Cancer Monument!
As we rode on along Freeway 1 of Taiwan's National Highway, a long red gentry beam arches over the road, it's our destination. This marks the latitude of the Tropic of Cancer at 23°26′13.0″ (or 23.43695°) north of the Equator. It's the northernmost point where the sun can be directly overhead. The monument and its park lies across the road. 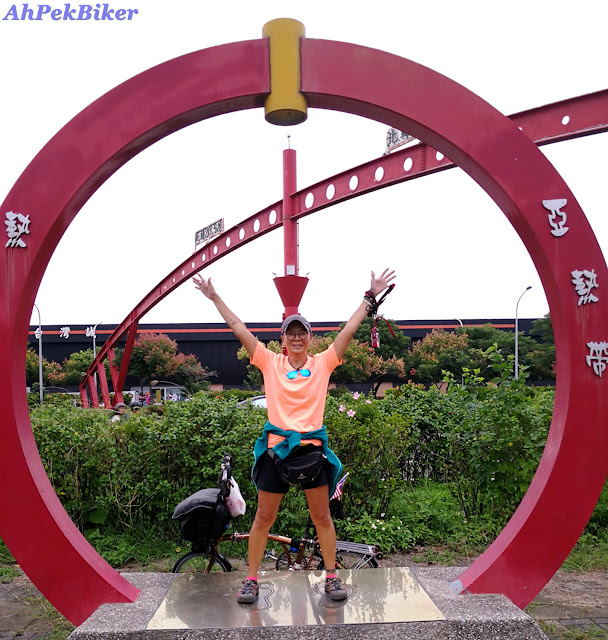 On that side of the road is another marker, a round, red vertical circle. At the base are two brass plates with two footprints, one on each side of the latitude. One can stand with a foot each on these footprints straddling the land of the tropics on one side and the temperates on the other. I was joking with Siah that on the Northern side of this circle, the trees would be pine trees and on the Southern side would be bushy deciduous trees. She just looked at me and swallowed like she had a lump of salt in her throat. 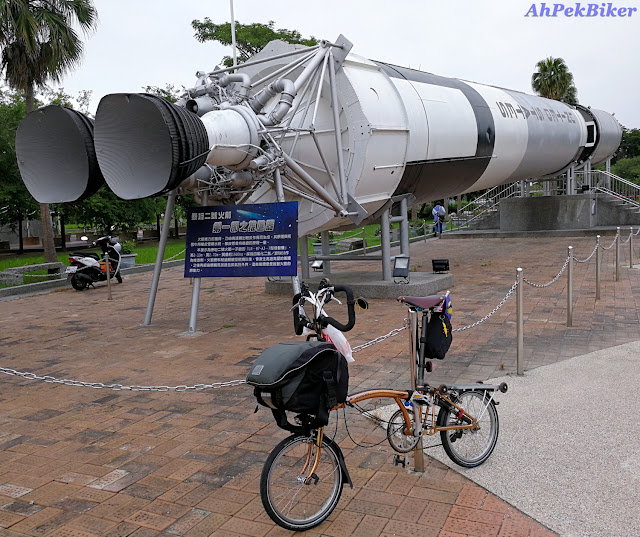 In front of the monument is a park with space-related sculpture and art work. Most interesting was this Titan II rocket that was used to launch the Gemini capsules of the Gemini space program. 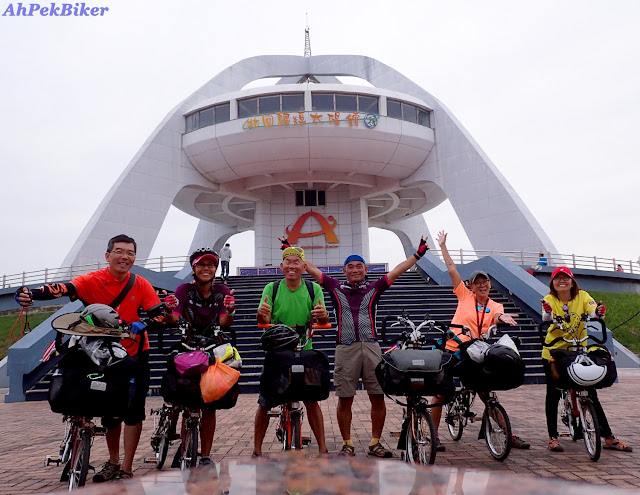 And here we are in front of the monument building which houses the Solar Exploration Center. 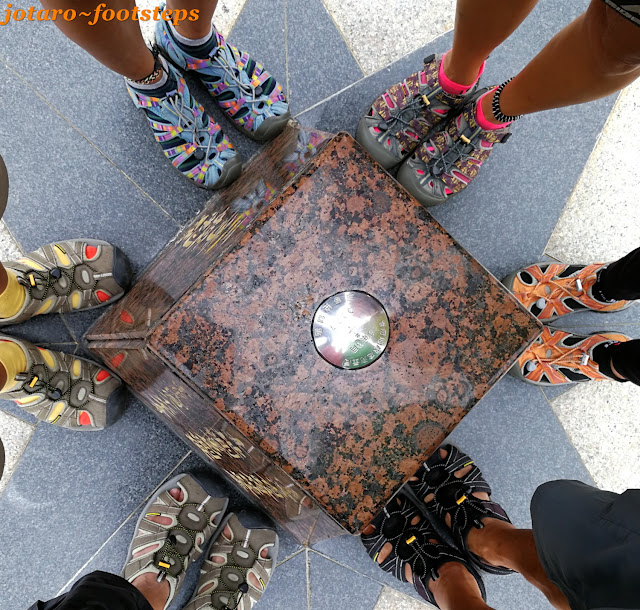 Before leaving the park, time to leave our footprints behind..... this is getting to be a habit, a good habit.
(..... read more of the Tropic of Cancer Monument) It's just a short ride from the monument to the Shuishang Station. The stationmaster here was a friendly person, he allowed us to carry our bikes into the platform without bagging them. This way it was much easier on our backs as there were two flights of steps each to handle. We only bagged our bikes at our embarking platform. Many thanks to the kindly stationmaster... Phew! 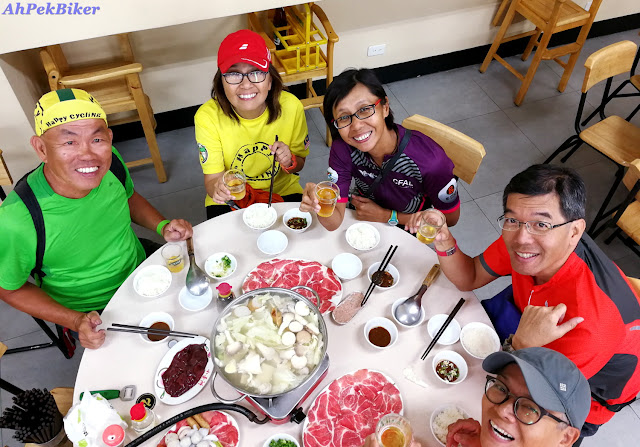 Upon arrival, we managed to promptly locate and check into a motel. This was the Fuh Dih Hotel , a love motel too and at a very reasonable room rate of NTD1.200 per room per night for two persons.
Dinner was good steam boat at Hot Pot Restaurant (小豪洲沙茶炉本店). Steamboat again? Didn't we have hot-pot in the afternoon? This one was the contemporary Taiwanese steamboat that comes with thin slices of pork, beef and lamb and a whole lot of different types of fish and meat balls. I love those fish balls in-filled with cheese.