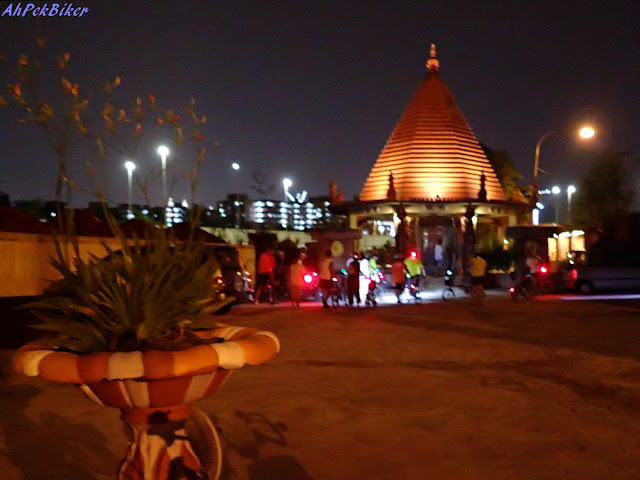 Route Recommendations :
1. This route (scouted ahead by Tai Lim of the hApPy HaPpY blogs). It takes us to Cheras via Ampang, Kampung Pandan and returning via Pudu, Bukit Bintang & Kampong Bharu. The route avoids busy main road as much as possible, cuts through pedestrian bridges, and even undegroung round-about.
2. As we were cycing at night, traffic was generally light even at the usually busy industrial area of Sungai Besi. There were several hard climbs at the Ampang & Pandan Perdana vincinities, but these were short and manageable. Some short stretches of off-road riding included.
3. Points of Interest:
- the pedestrian bridges running below the AKLEH Highway, with the huge overhead beams almost touching our heads.
- the Bodhi Homecare Centre in Cheras.
4. Food
- Dinner was at Chuan Kee Hakka Restarant (泉記客家釀豆腐) which serves pretty good Hakka dishes.
- an alternative dinner place is Tin Mei in Bandar Baru Ampang. It serves good Penang street food and desserts.

Our Happy Cycling Group holds regular Wednesday evening rides. Sin (of the hApPy HaPpY blogs), our group leader will takes us on interesting routes either around the Kuala Lumpur or Petaling Jaya locality. We had rode to interesting places and at times even to join cultural processions, like the ride above celebrating the Nine Emperor Gods Festival.
Of late the Chief (as he is affectionately called) has been doing cycle scouting for more routes. This ride here is a result of one of his scouting missions. 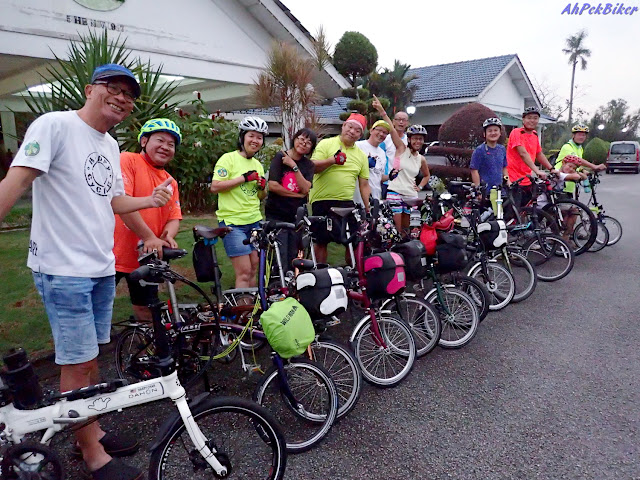 7:00pm - Eager faces, all smiles as we get ready to set off.
To avoid the busier main roads, we rode out through Titiwangsa and cut through Jalan Fletcher exiting to Jalan Tun Razak via the Petronas petrol station. 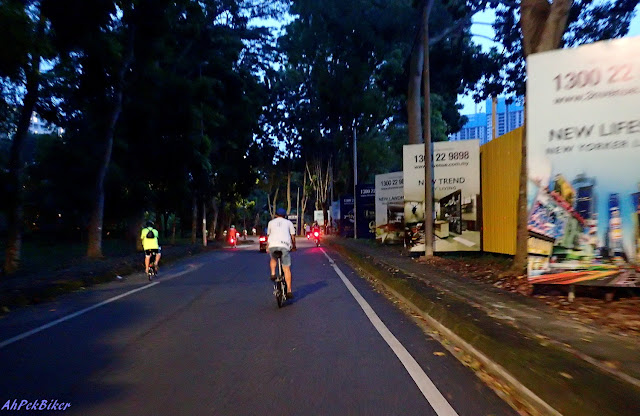 After a short stint at Jalan Tun Razak, we turned left into Jalan Sultan Yahya Petra (formely Jalan Gurney) and then into Jalan Maktab.
Yes! We are away from the maddening evening traffic rush, and onto quieter roads, lined with tall shady trees; dusk is already setting in. 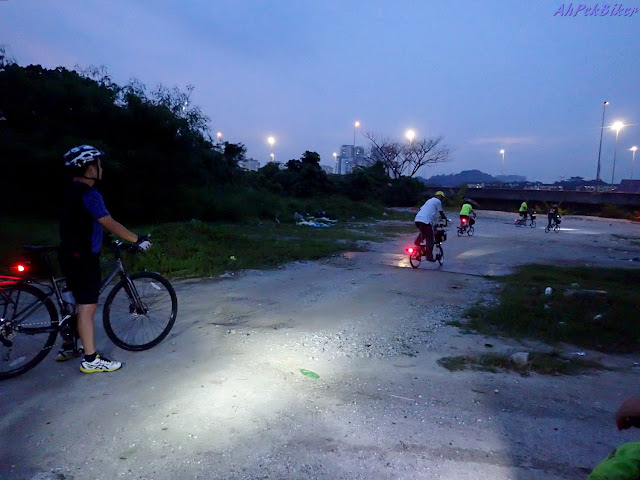 Somewhere near the South Korean Embassy, we were suddenly onto off-tack gravel roads that led to a sandy patch. There was supposed to be a road here, but ongoing development had filled up the land and covered up the road.
AND this is way our real adventure began... 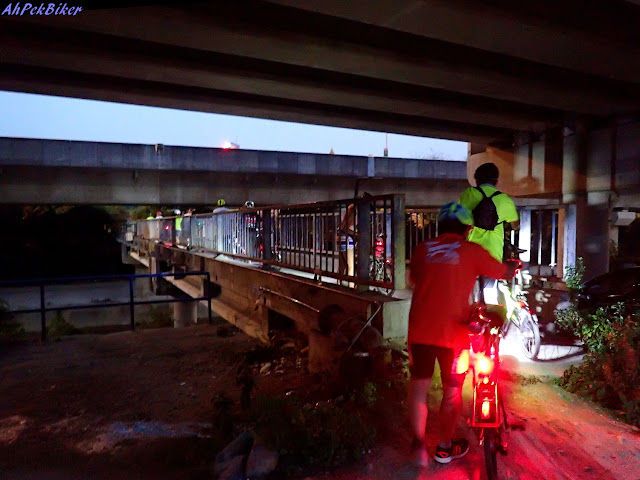 Beyond the sandy stretch, we had to push our bikes down some slopes and then onto a pedestrian bridge which ran below the AKLEH Highway. The huge beams of the higway ran so low that we could almost touch them. 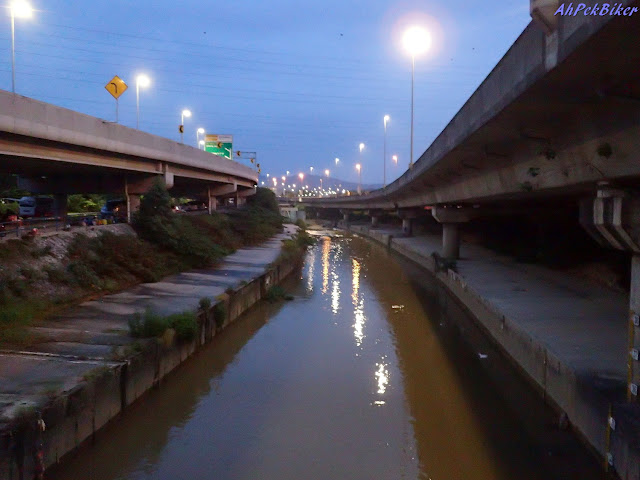 I was admiring this view of the Klang River from the bridge with the highway running above both sides of its banks when a shout rang out "turn back, U-turn... wrong way".... ..... and it was back across the sandy patch and carrying our bikes back up the slippy laterite slope.
But I think we did not make a wrong turn, I think Sin just wanted to show us that interesting bridge, it was interesting indeed. By the way, the bridge does lead to somewhere; it leads across to the Wangsa Maju & Setiawangsa locality. 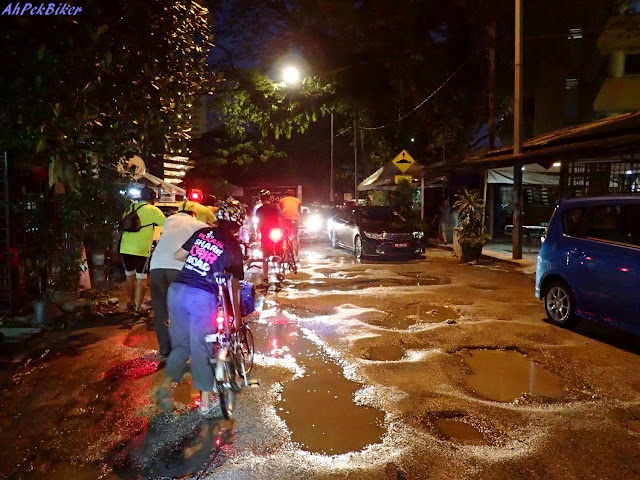 Ahead more pushing of our bikes across muddy stretches of roads; a late afternoon shower had made our ride cooler BUT had also made it a little bit muddier 😆.
Riding through some beautiful roads at the Taman TAR area and across some hard slopes, we reached Tin Mei in Bandar Baru Ampang, where we were suppose to have dinner... Hah! It was closed!
Sin asked whether we would like to try some Hakka food in Cheras about another ten kilometres away. Although it was slightly passed eight, all just answered a hearty YES; we trust his tastes. 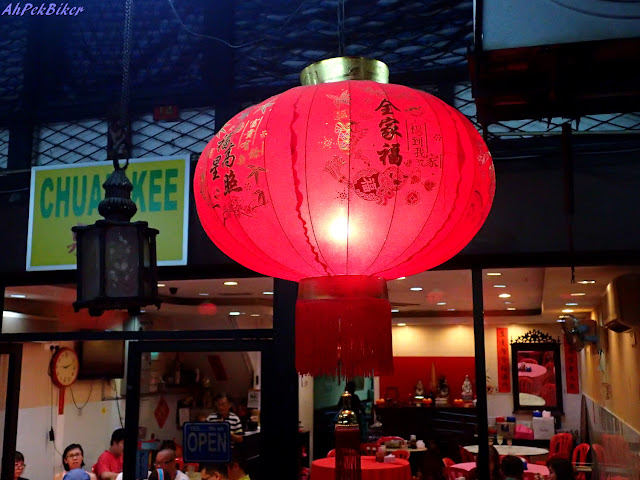 9:00pm - After taking on some hard climbs at the Taman Bukit Teratai area we arrived at Chuan Kee Hakka Restarant, famished we are eager to savour their Hakka dishes. 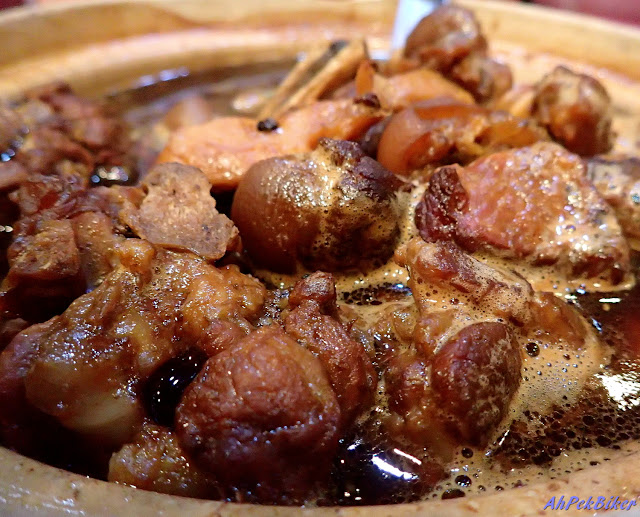 Our favourite dish was this Claypot Vinegar Pork Trotters. It's a stew of pork trotters cooked with Chinese black vinegar and old ginger; a strong tasty good dish to keep us warm during this cool evening. 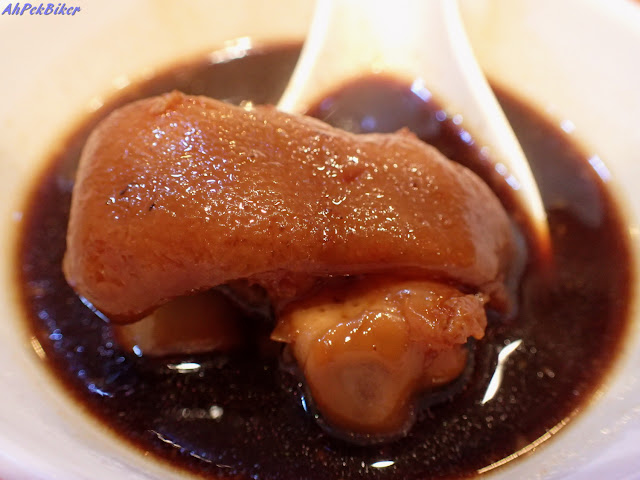 Take a close look at this pork trotter cut... !YummY! 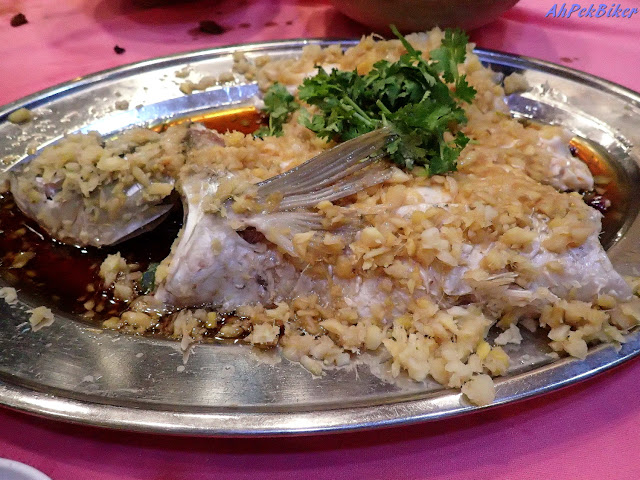 Another nice dish was this large cut of Tilapia cooked in a soy-ginger sauce.
Other nice dishes we had were: Claypot Lamb Stew, Yong Tau Foo, Broiled Free-range Chicken, Stir-fried Thick Long Beans with Eggplant. 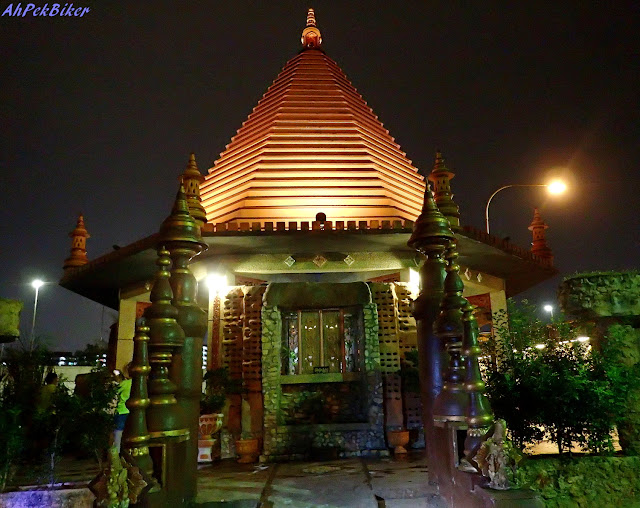 A short distance away was our next destination, an interesting place called Bodhi Homecare Centre. Within this centre is a beautiful shrine with orangish-red roof that steps up like a pyramid. 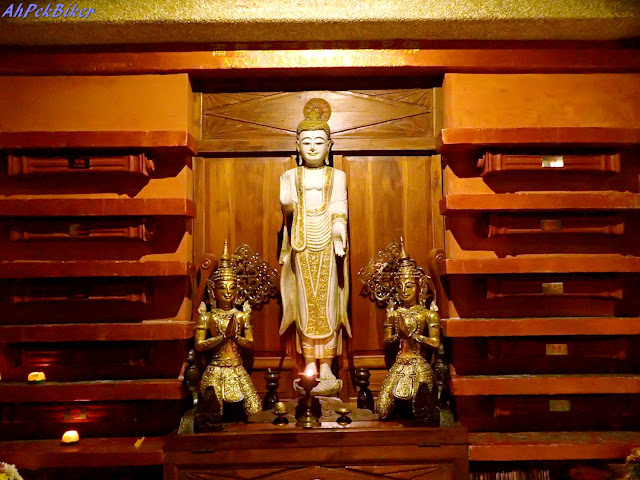 This is a Buddhist shrine and withing it is an altar for praying to Buddha. 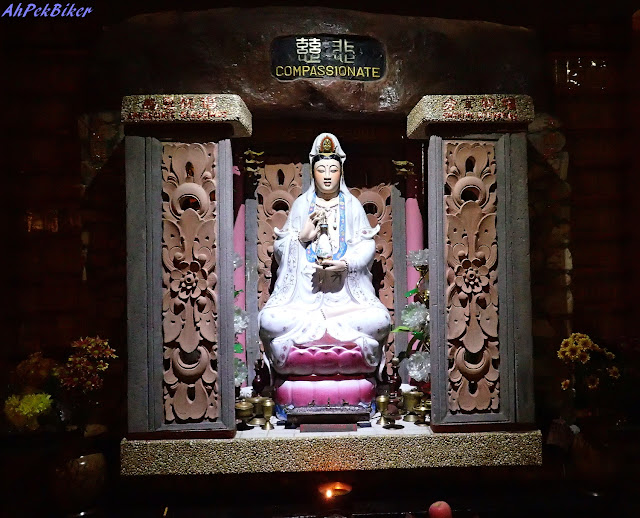 Another altar is dedicated to Kwan Yin. 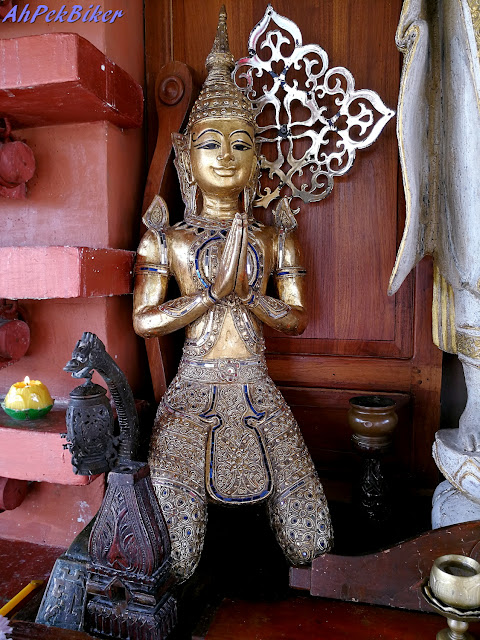 This shrine seems to have some Thai influence, a couple of Apsara guard the statue of Buddha. 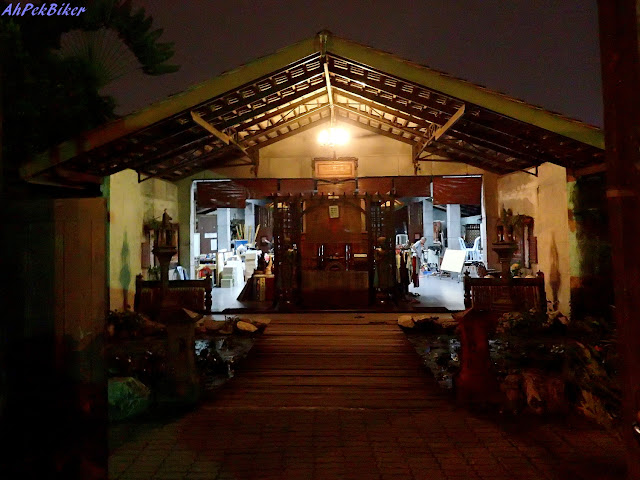 The centre provides care and education for oprhans and elderly of this locality. Adjacent to the shrine is the quarters for the orphans and displaced elderly. 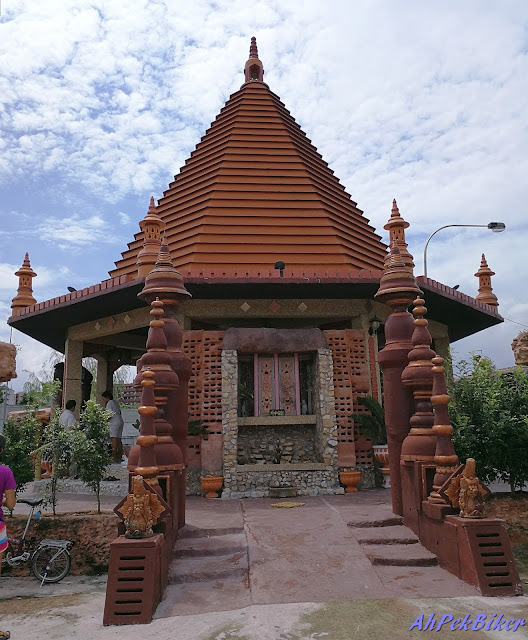 So taken in by this centre, we later rode there again on another day for a better view of it during the day time. 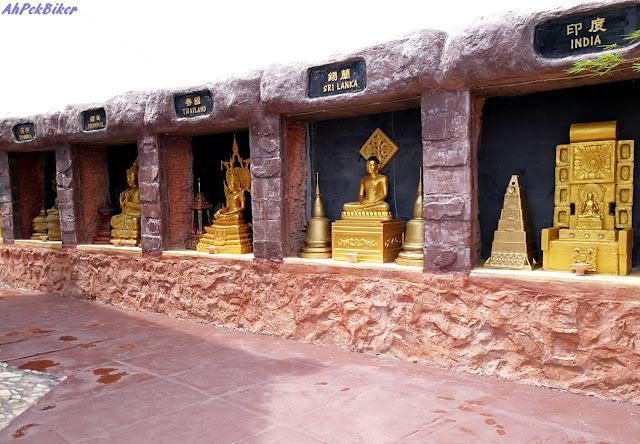 On one side are niches, within which are altars with statues of Buddha from various Asian countries. 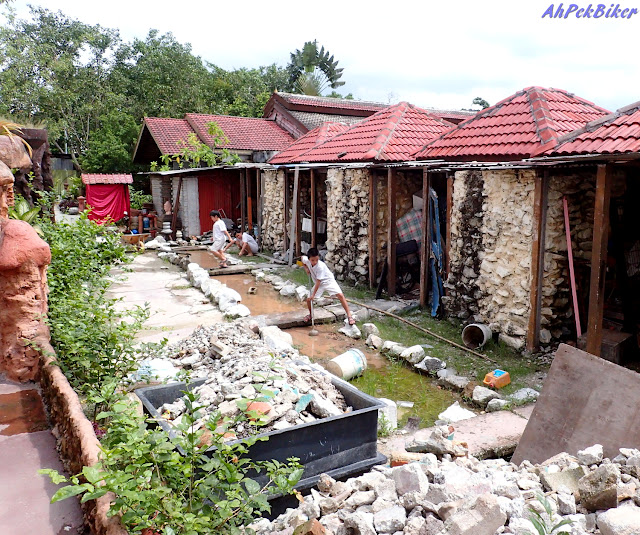 The orphans are very disciplined and often visitors are offered drinks by them. They also tend to the vegetable plots within the centre.
Those who are interested to give donations and provide voluntary support for this centre can contact Ms Ng Ching Yuet at 016-2774076.
Their website is http://bodhihomecarecheras.blogspot.my/, and Facebook page is https://www.facebook.com/pages/Bodhi-Homecare-Centre/652009134901113. 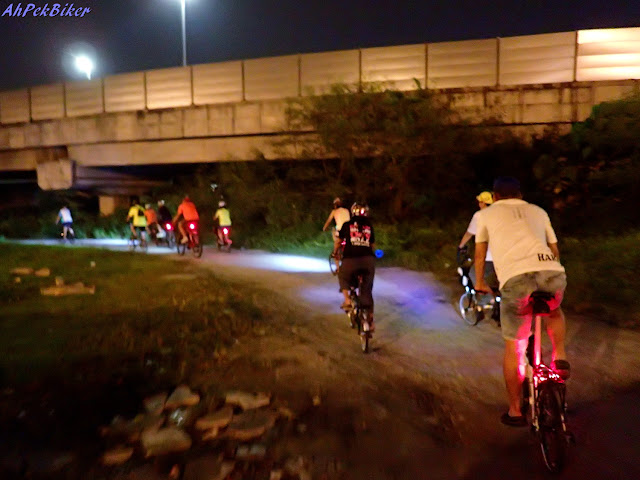 Our adventure is not at end yet; we rode out of the centre through gravel tracks... 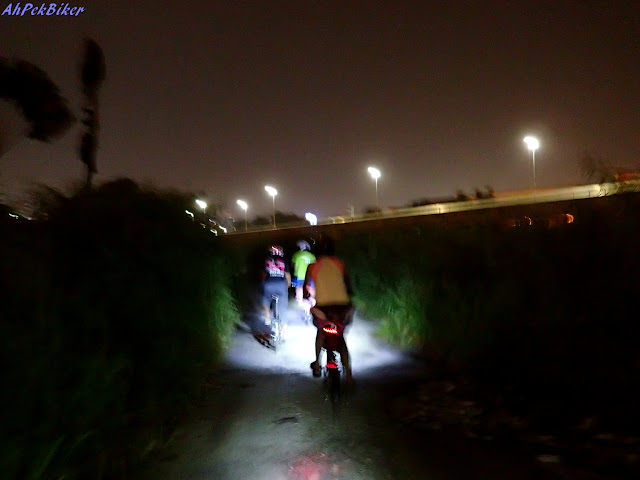 .... which got rougher, narrower and darker. No, wonder Sin reminded us to make sure we had our bicycles lights along! 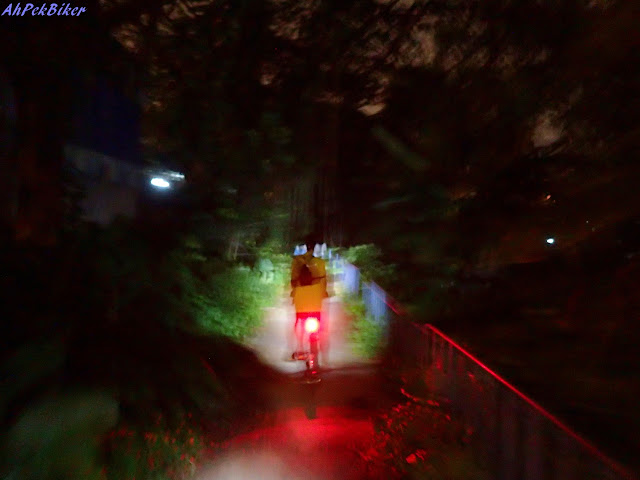 Oops.... more jerky photos, this is of us cycling along the banks of the Sungai Kerayong. 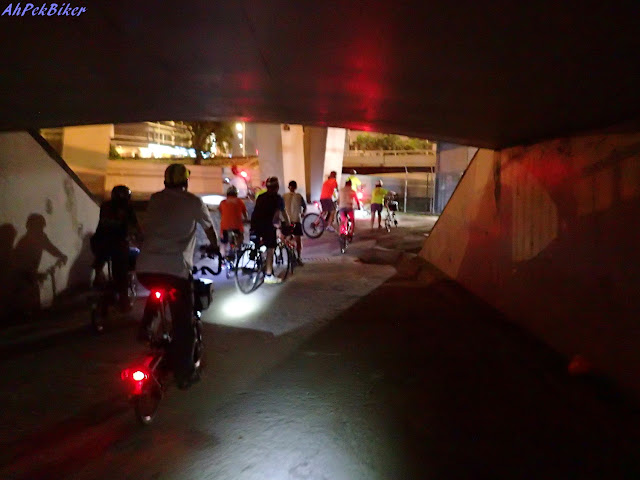 We crossed another bridge and were suddenly within the Chan Sow Lin industrial area of Sungai Besi. And further on, Sin led us into a dark tunnel... 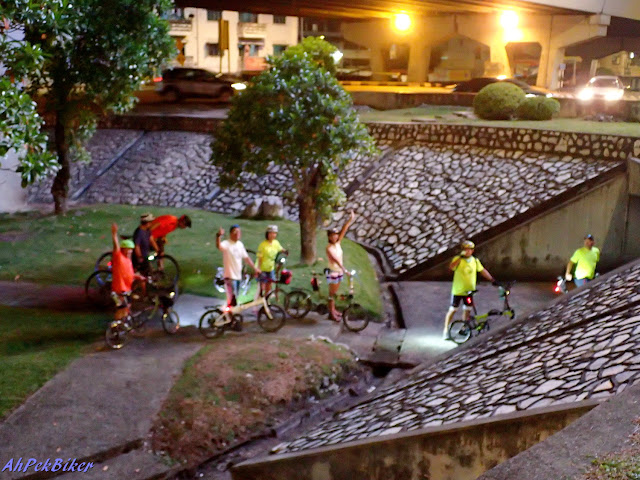 ... which opened out into a nicely landscaped area with some trees.
Hey! We are inside the Jalan Loke Yew-Jalan Sungai Besi round-a-bout! There are even trees growing here. This is a safe way to traverse this busy intersection where eight roads meet. 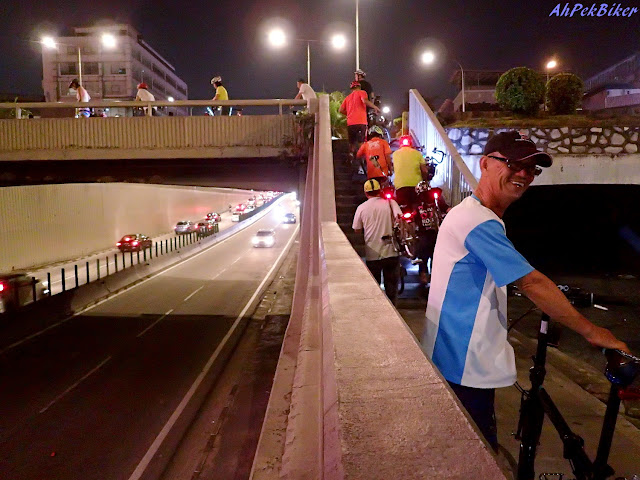 Running above this round-a-bout is the flyover of Jalan Loke Yew; and at its centre, Jalan Sungai Besi bisects and run below it. Interesting yah? 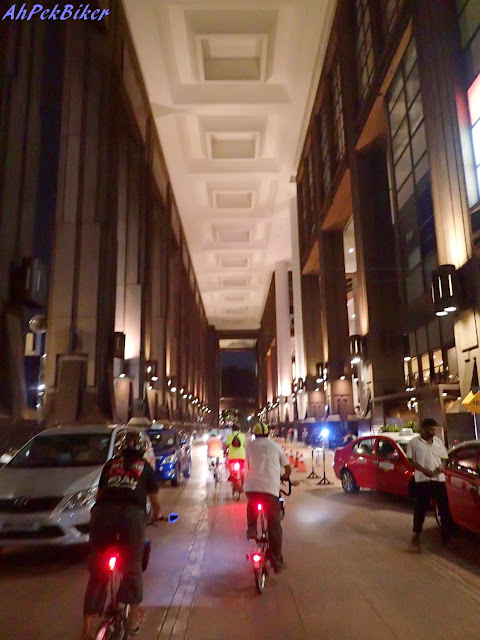 Further on, after cutting through the Kenanga Wholesale area and Jalan Pudu, we were riding below the tall ceiling at the driveway of Berjaya Times Square... 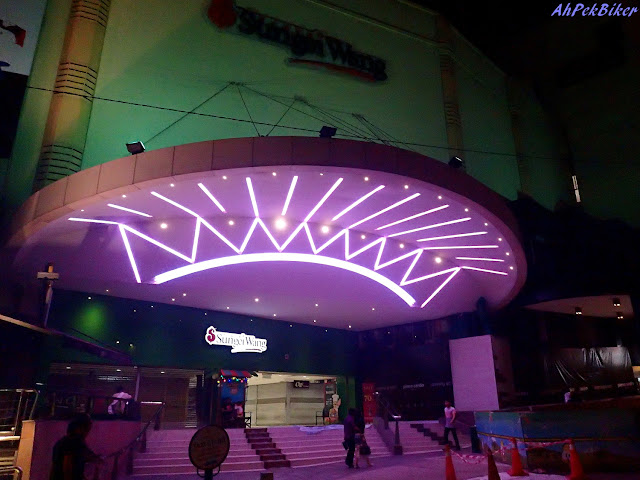 ... and the brightly lit entrance of Sungei Wang Plaza. Yes, we are back at civilisation 😏. 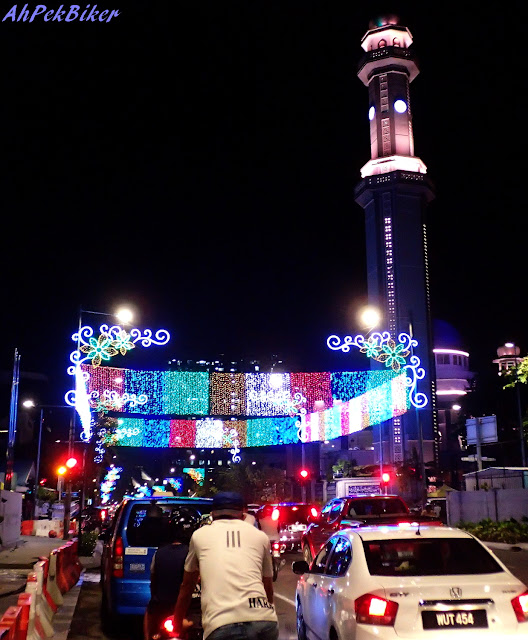 At the Kampong Bharu area, the streets were lit up with bright neon decorative lights; what a colourful way to end our ride.

You are at - Jotaro's Blog / AhPek Biker / Cycling Malaysia / Selangor / USJ19 Wawasan To Bukit Lanchong Rural Loop
(comments most welcomed below. if you like this pls share via facebook or twitter)
Posted by Jotaro Zen at 7:00 AM