Route Recommendations :
1. Right is Right!
- Korea traffic is left-hand drive. For those coming from right-hand drive countries always do remember to ride on the right-hand side... i.e. Right is right! Same thing applies when crossing the rode, take note that traffic is approaching from left! Sounds confusing, it actually isn't, just take while to get use to it.
- Do be careful at un-signalised zebra-crossing, drivers often do not stop for pedestrians to cross.

2. Ride Conditions
- Not much riding, just short distance from our hanok to dinner.

3. Bringing Bikes Onto Korean Trains & Buses
Full-sized bicycles are allowed onto the first and last coach of Korean trains on weekends or public holidays. Folding bikes are allowed onto the trains at any time.
For intercity buses, our bike were put into the luggage hold. There was no necessity to bag them. Local buses do not allow bicycles to be brought on board. 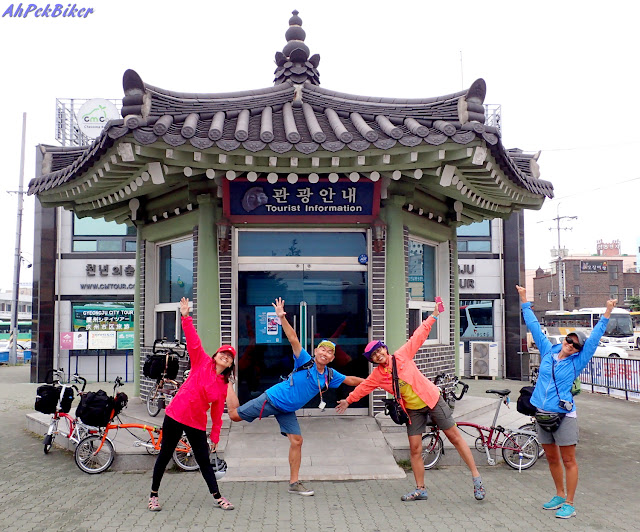 The previous day, we had arrived in Gyeongju and had had a full fun day lasting into the night with visits to its various historical sites like the Tumuli Park, the Donggung Palace, etc. Today, we head out from Gyeongju to visit another UNESCO Heritage Site. And we did get to savour food of the local rural flavours too.


Ride Route - Hanok Sadomjeong (Gyeongju)>Yangdong Folk Village>Hanok Sadomjeong.
Today we took a break from cycling and we hopped on to a bus out from Gyeongju to go visit the Yangdong Folk Village, another UNESCO Heritage Site. Okay, we did cycle a bit - just a short distance from our hanuk to a nearby restaurant for dinner; so short that it's embarrassing to mention the distance. 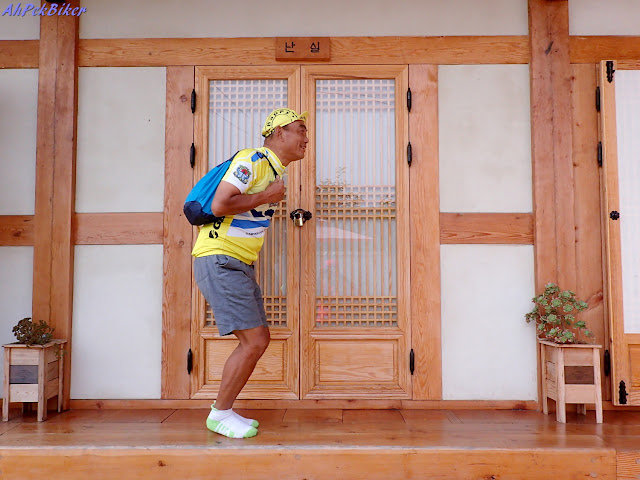 When I posted this photo earlier, a few friends joked about it "Hah! Coming back late and have to quietly sneak in!". Well, the quiet part is right, but the sneaking wasn't.
I am a loud person; I speak loudly and move around very noticeably. Staying in a hanok with paper thin walls, I had to learn to be quiet. Open the sliding doors quietly and walking on tip-toes quietly. Now I can appreciate how difficult it was for the Japanese ninjas to move silently and stealthily around. But one thing I did not learn was to sleep quietly - my loud snoring did make a strong impression on my hanok-mates! 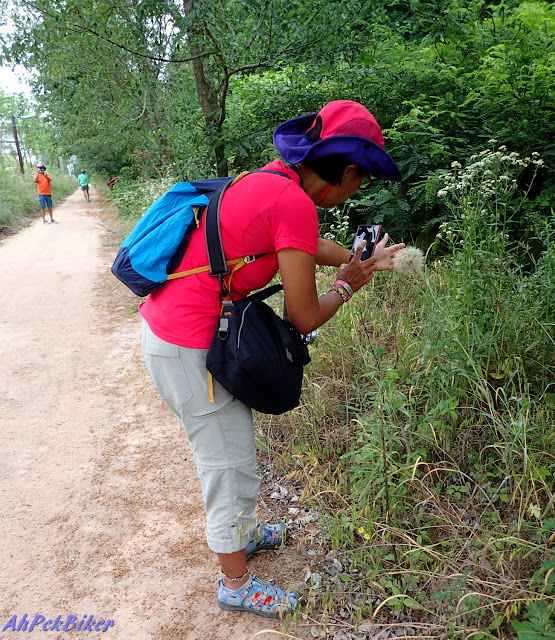 After a simple breakfast at Hanok Sadomjeong, we walked out towards the main road (Taejong-ro) to catch the #203 Bus for the Yangdon Folk Village but just missed it. Dang! the next bus would have been another 1-1/2 hours later; fortunately a kindly #200 Bus driver stopped to pick us up, mentioning "Yangdon, Yangdon". Okay, let's board then. About forty minutes later, the bus stopped at a bus-stop at the side of the Hoguk-ro highway.
Aiks! We were not at the folk village! But at that stop were signages with directions to the folk village which led to a pathway leading to the village. We walked along this 1 km. plus path, it was a nice country path, green with flowers along the way. Such a calm, beautiful walk in; we must thank the bus driver! 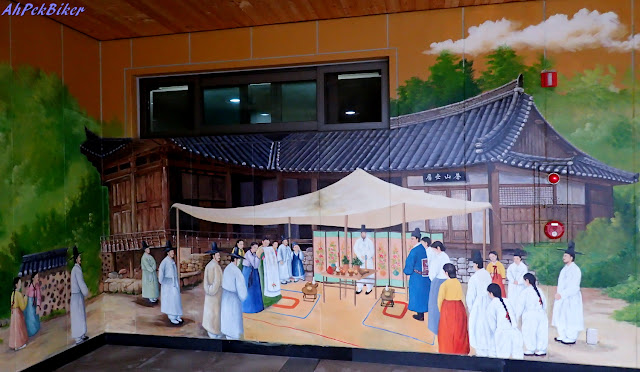 At the folk village, just before the ticketing booth is the Yangdon Relic Museum. There are relics from the old houses of the village here on display, farming equipment, etc. On the walls of the compound were large murals depicting ancient live here. 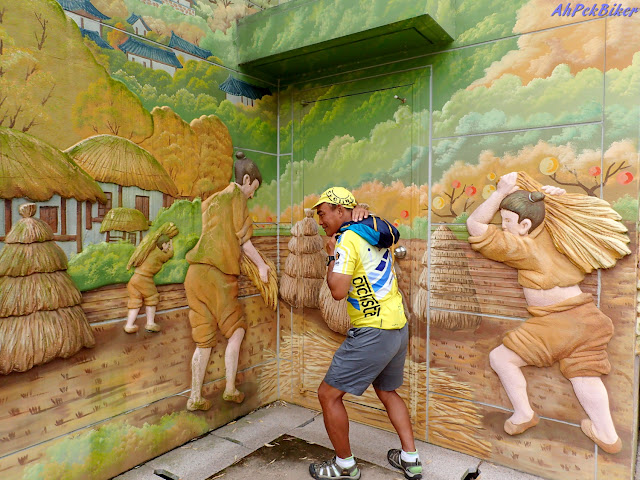 Other murals showed farm life; here I am joining the "farmers" in the harvesting; a poor copy though... my sack is so, so small. 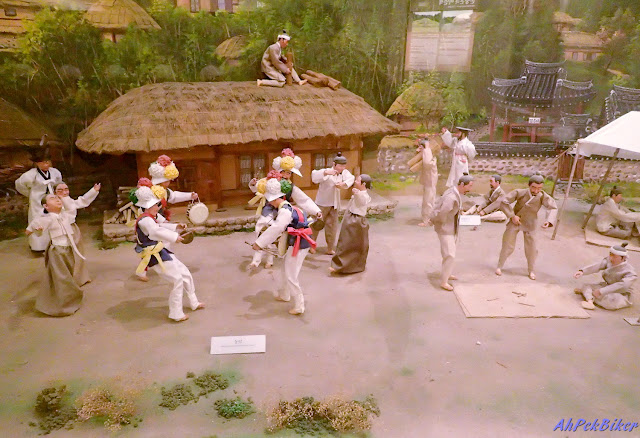 Entry to the museum is free and on display too were dioramas of day-to-day life back then, like this one of the villagers doing the Nongak (a traditional Korean rural dance). 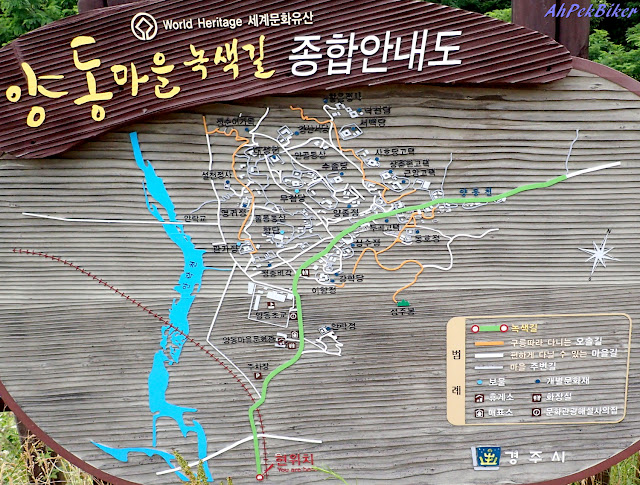 More of the museum later, let's head on to the village. At the entrance was a map showing the entire village. A road runs through the village, most of the houses are on the north-west side, with some on the south-east. At the southern edge was the Ganghakdang village school, an UNESCO Associated School; while to the west is the Hyeongsan River. Indicated in orange were the three recommended Yangdon Folk Village Walk Routes. 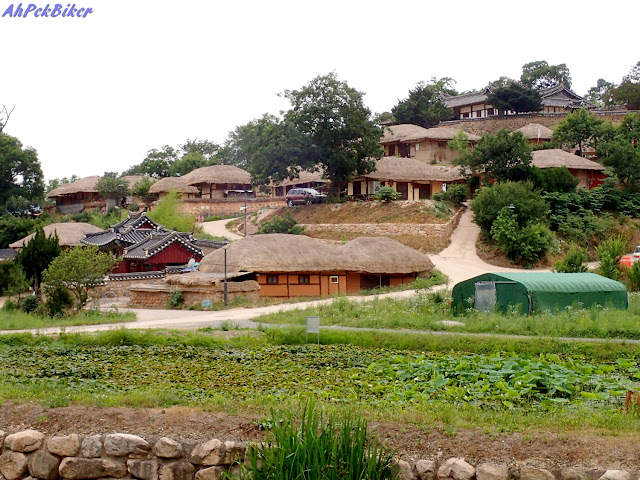 The houses sat along terraces a low hill, many of the houses are timber ones with thatched roofs. And there is still farming carried out here as seen in the foreground. The thatched houses were occupied by farmers mainly. But some poets and artists stayed in the larger of these, perhaps the warmth of the wood and hay thatch gave them inspiration. 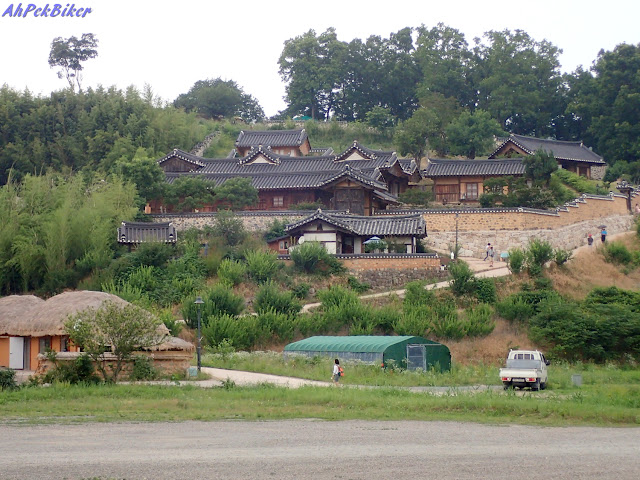 To another side were tiled roof houses, these were occupied by the upper-class or officials of the village. Altogether there were over 160 tile-roofed and thatched-roof homes built throughout the dense forest. Fifty-four historic homes over 200 years old have also been preserved. 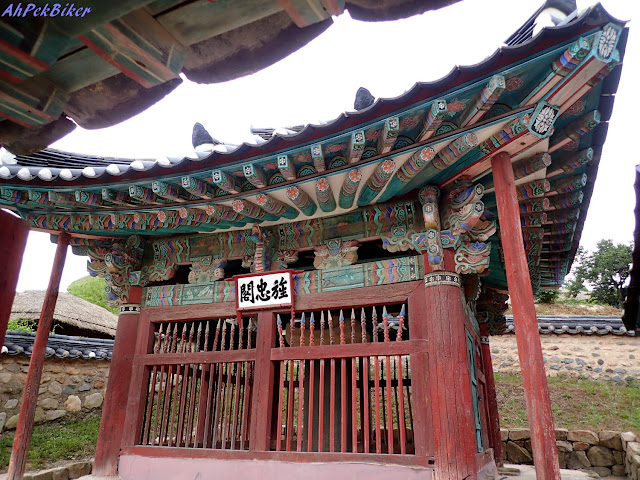 Right at the entrance to the village were a couple of small pavilions. These were shrines built on the order of King Jeonjo in memory of Son Jeong-ro and his servant Eukbo who were killed at the Battle of Ssangryeong Incheon during the Mongol Invasion of Korea in 1636. The Jeongchunggak Pavilion is dedicated to Son Jeong-ro, and the Chungnogak Pavilion to Eukbo. 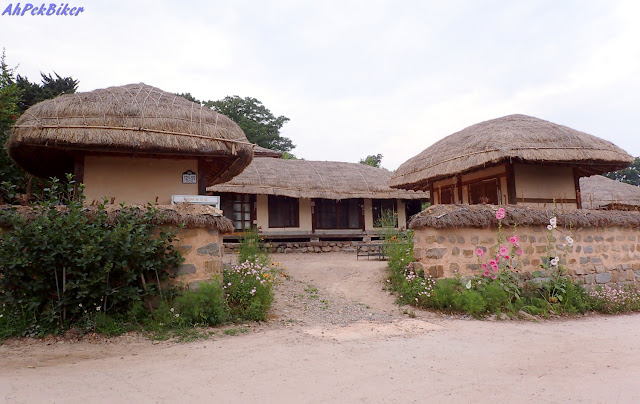 A close up look at one of the thatched house showed that they were slightly elevated above the ground and constructed of timber with hay thatched roofs. 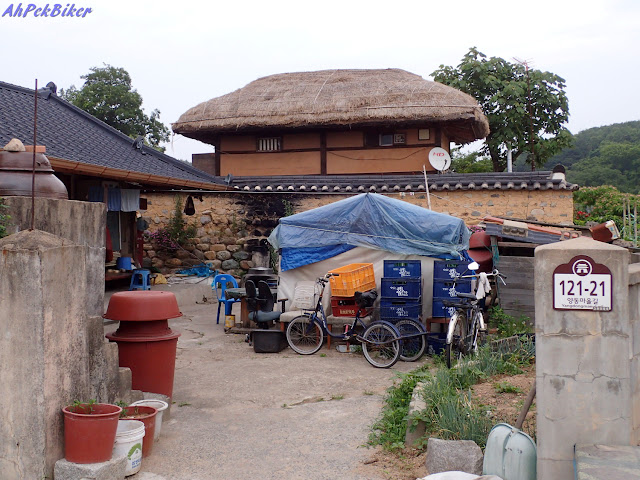 Unlike the Yongin Folk Village near Seoul which was more like a theme park (... see Cycling Korea 2016 Day 2 blog), the Yangdon Folk Village is a living village. Many of the houses are still occupied by descendants of the original villagers; still carrying out their day to day business. 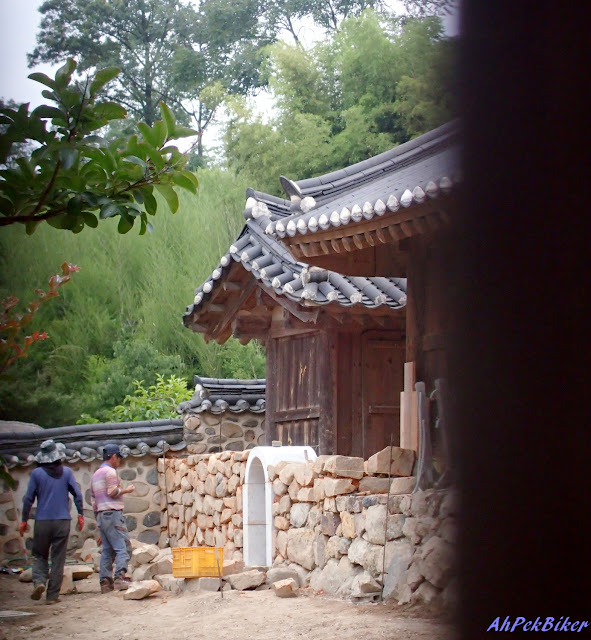 At a tiled roof house, the entrance was locked but I managed to take a photo through slits in the door which showed workmen building a low wall with a shrine inside. 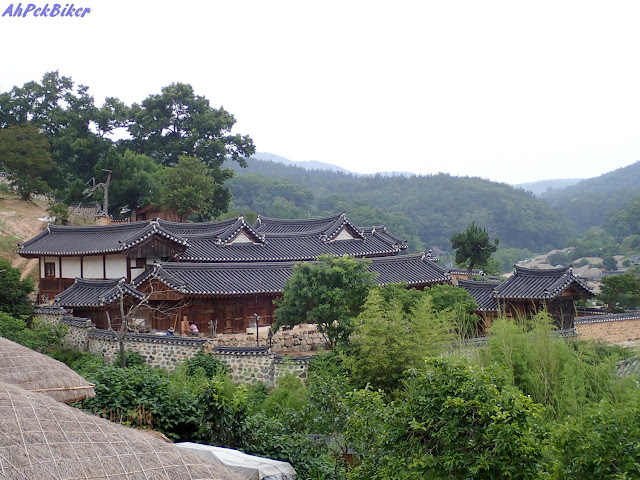 A close look at the tiled house. 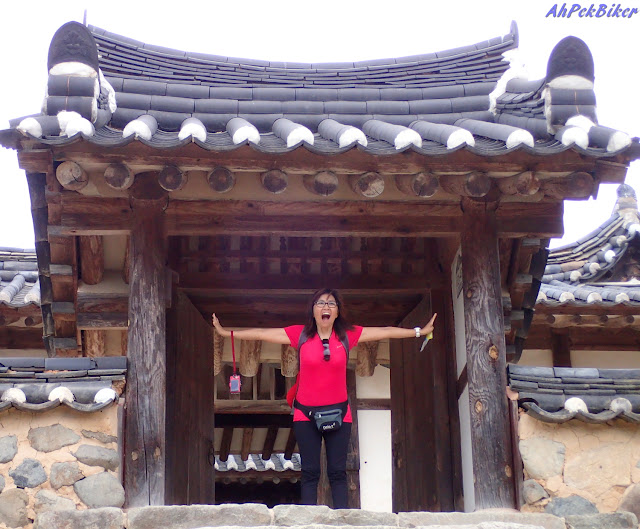 The roofed entrance gateway of another tiled house. 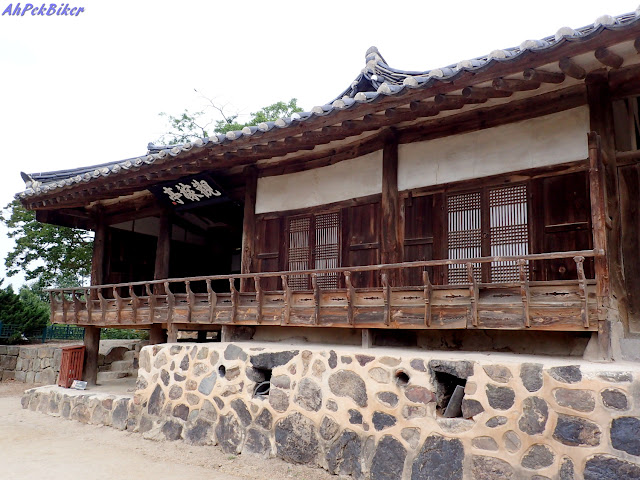 The house was also slightly elevated above the ground and there was a raised balcony in front. Most of the tiled houses used dark stained timber in their construction. 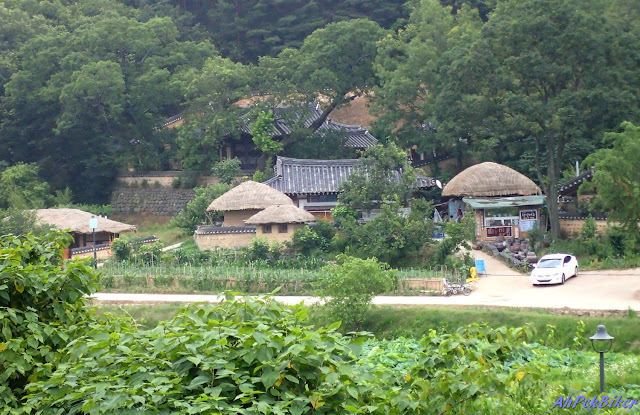 Within the village there were no real restaurant but there was a shop called "BongBong" Cafe which sold snacks, drinks and ice-cream. Ice-cream? Yay! 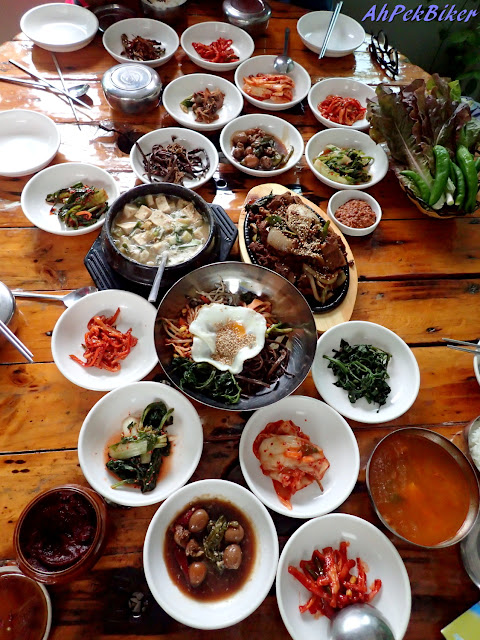 We had our lunch at a restaurant next to main road. It was rural affair with dishes that were particular to this region. Their bibimbap were made with slightly different ingredients and did not use chilli as a condiment. They also served a very good tofu soup, but most interesting were the Quail Eggs Stew & seasoned cockles. 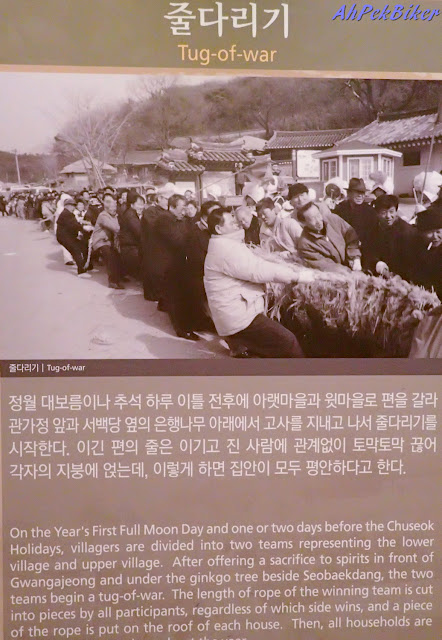 Back at the Yangdon Relic Museum, we went inside for a more proper view of their displays. On the walls were posters depicting present day life here, one which still followed centuries old cultural practices - like the above tug-of-war held during the year's first full moon (i.e. the fifteenth day of the lunar year). The villagers are divided into two team representing the lower and upper village. The length of rope of the winning team is cut into pieces and distributed to all participants, then all households are said to be in peace throughout the year. 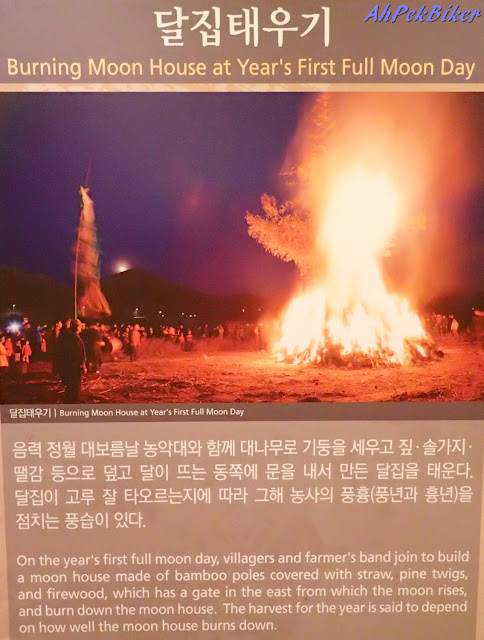 Another practice is called the "Burning The Moon House". On the year's full moon day all villagers and farmers join together to build a "Moon House" made from bamboo poles and covered with straw, pine twigs and firewood. The gate of this house is on the east side, i.e. from which the moon rises. In the evening, the moon house is lit up and burned down. The harvest for the year depends on how well the moon house burned, the better it burned, the better the harvest. 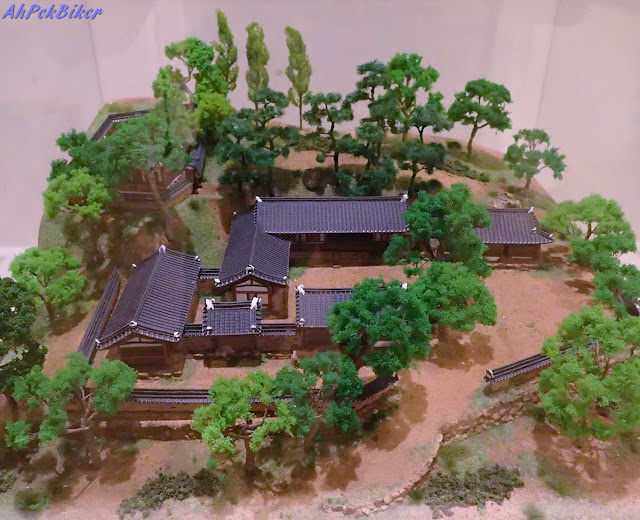 Within the museum were also several models of the more prominent houses of the folk village. Some posters next to these models tells of the history of the houses, while others showed the plan of the building. 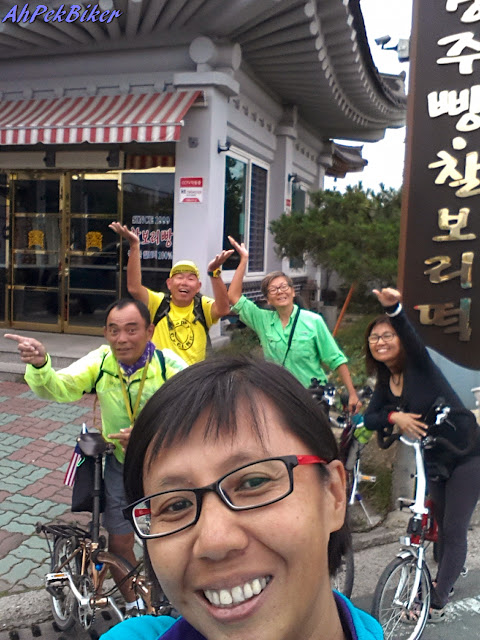 Back in Gyeongju, after a good rest we set out for dinner. But where shall we go, here or there? Fortunately Kim Eun-hee, the host of our Sadomjeong Hanokstay recommended us a good restaurant. 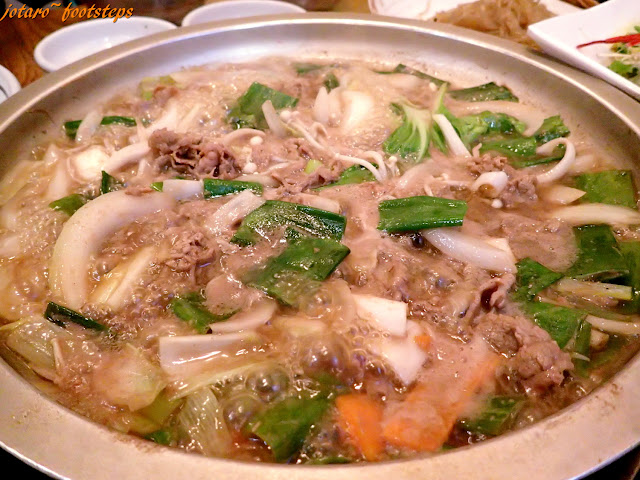 This was the Gyodong Ssambap (교동쌈밥), a nearby restaurant that served authentic Gyeongju food. We started off with the Tosok-Sshanjeongsik, yes the name is a mouthful to get out. Fortunately the menu have the written equivalent in English (and photos to show too, which was most helpful to us Korean illeterates), so there was no problem in ordering. This dish comes with raw meat that is either barbecued or dip into a hot soup. The meat available are pork, duck and beef all marinated with bulgogi sauce. Having had had barbecue meat in several of our earlier Korean meals, we decided to go for the soup version. We went for the beef and it had a very distinct name of "Gyeongju Millennium Hanwoo Bulgogi". We dipped it into the hot soup for and appropriate short while an started walloping! The meat was tender as expected of Hanwoo beef, and juicy too. The Bulgogi seasoning was very light, so light that it's flavour was just a tinge on the tips of our tongues. It was very good, as good as its distinct name. 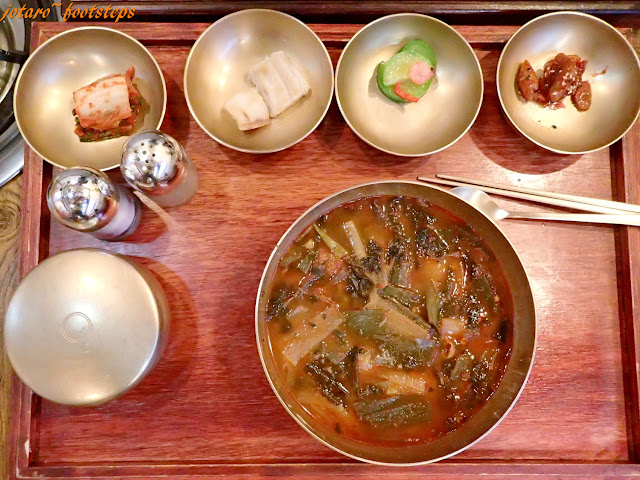 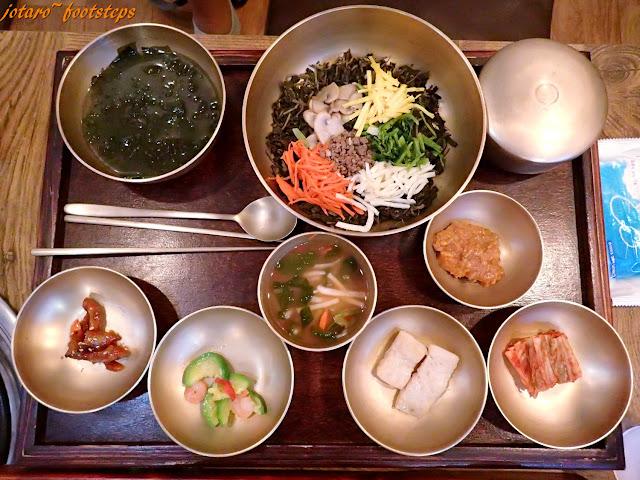 Last was a bibimbap of a different kind; it's called Gondalbi Bibimbap. This colourful dish consisted of friendly wild herbs, gondalbi leafs, button mushrooms and water parsley. Instead of Gochujang (red chilli powder), a condiment of powdered anchovies in soy-bean paste is used to flavour the dish. It's not the usual bibimbap and I liked it very much as its soft flavours contrasted the hot beef soup. The set came with light side-dishes, rice and a bowl of vegetable soup. 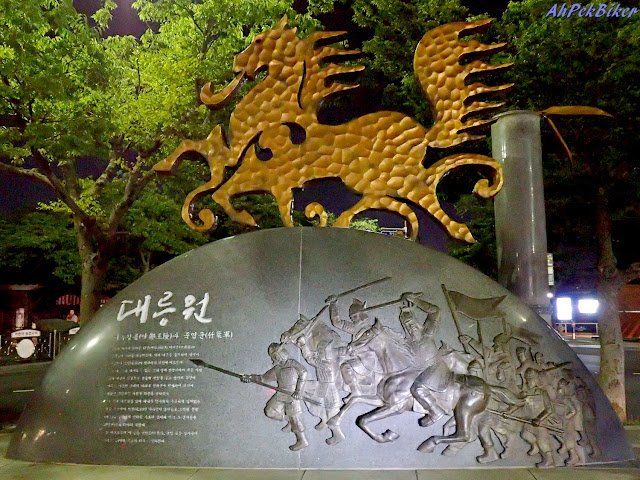 It was a very good meal indeed, another one that exposed us to the unique rural style cooking which we really relished, and had to afterwards ride off the hefty meal at the nearby Cheomseongdae Observatroy park.
This golden Cheonma (Korean Pegasus) we saw at the park was most appropriate for our last night here in Gyeongju; tomorrow we leave the town and head to Busan for more city riding adventures!

A video by Sin of Day 12 of our South Korea tour, from Gyeongju to the Yangdon Folk Village.