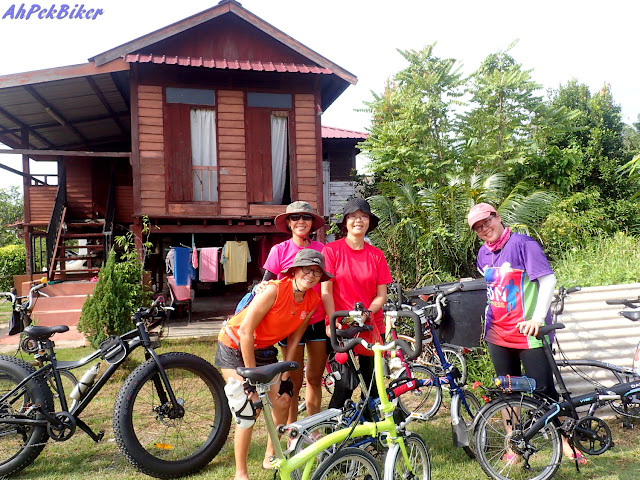 Route Recommendations :
1. The rural scene here is one of a relaxed, laid-back life with kampung houses and fishing boats. The locals here are really friendly and helpful.
2. The roads here, being near the sea, are relatively flat. Do start riding early as most of the roads are not shaded, or just cover up / apply sunblock.
3. Except for a few main roads, most of the roads here have light traffic.
4. Do get a local to guide you around if possible, they can show you the following points of interests:
- The goat farm where goat milk packed in plastic bottles are sold.
- Ride along sugar plantations and pass mangrove swamps.
- Stay at one of the boat-houses to feel the pulse of the village.
- Go out on a boat to the Straits of Malacca for a leisure trip or some serious fishing.
(Click here to send a message to Baki's FB for booking of the the house-boat and fishing boats. Guided horse tour of the mangrove swamps can also be arranged.) 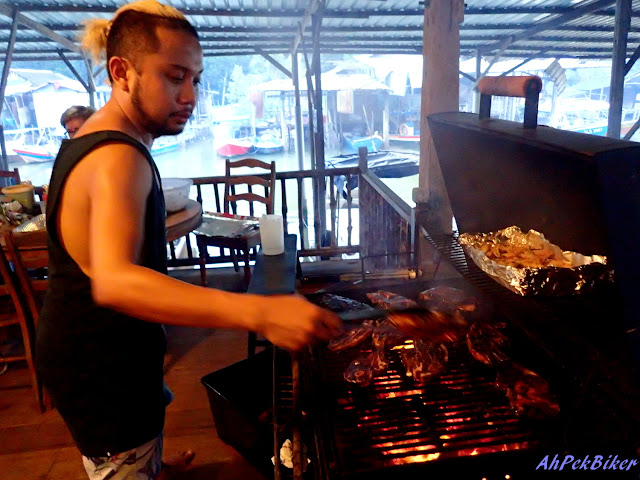 Our buddy Baki is ever humble and generous to a fault. It's the Chinese New Year period and most of us were still in a festive and holiday mood; Baki being the friendly person he is organised a get-together, an interesting one that was held at his boat house down in Kapar, Klang.
The boat house stands on stilts over a tributary of Sungai Sementa Besar. It is a large house with fishing boats parked below it. There are a a couple of bedrooms, a living hall, a fairly well equipped kitchen, and best of all a large verandah hanging over the river. AND the verandah came with a couple of barbecue grilles.
Our get-together was suppose to be a potlatch party, but Baki had prepared a big tub of lamp chops, superbly seasoned for barbecuing. Some came earlier, to cook their share for the potlatch. 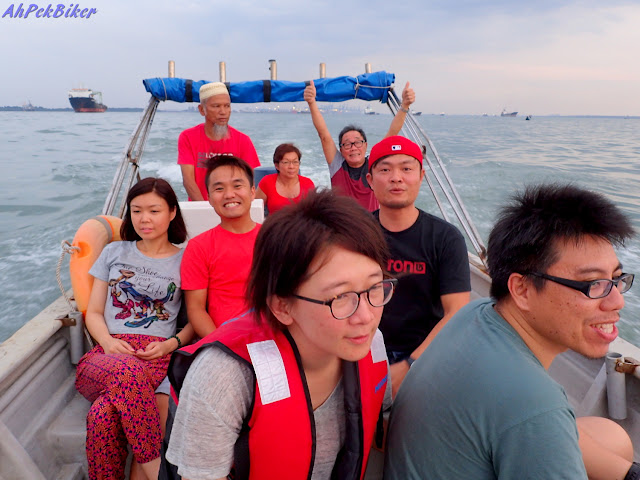 Most of us had brought pre-cooked food and while some were doing their cooking, the rest went out for a boat cruise. Down the river we went and then out to the Straits of Malacca to try to catch the sun set; unfortunately Mr. Sun was a tad shy today, hiding behind the clouds.
We were at the part of the sea near Port Klang, and many ships could be seen anchored off the port. I note that the boat had many tubes bolted to it's back, sides and front. No, these were not for firing off flares but were receptacles to slot in fishing rods. See, these boats are also hired by anglers for some serious fishing. The more hardcore ones even go close to the sea border with Indonesia hoping to get bigger catches. 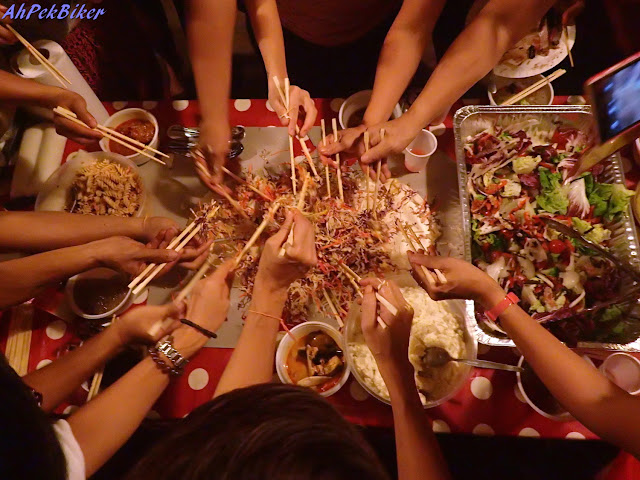 Back at the boat house, our feast began with a tossing of Loh Sang, the traditional Chinese way of bringing luck for the year. Higher and higher we tossed until some of the ingredients overflowed onto the table; but that's okay as it signified business/wealth in abundance until overflowing.
And our food was abundant too! Starters was Ox-tail soup patiently cooked by Fenn, simmered overnight till all the flavour from the tail exuded out. Then there were a couple of salads - fresh greens and potatoes. Mains were the BBQ lamb, a big pot of curry fish-head (made with the freshest of fish), fried beehon, barbecued prawns (the freshest of fresh too), satay, etc. Desserts were apple crumble (which really did crumble in our mouths), pear something (the name of which slips my mind) and egg-tarts.


The food were "not nice".... a joke started by Chew; while sampling his curry fish-head he kept on repeating, "Not nice one... not nice one". Actually it was very nice, so were the other food; but through out the evening we were offering each other "not nice" food.
There was abundant drinks too: beer, wine, whisky, soft drinks; and a cocktail prepared by Kimm, one which as the evening dragged on became a real pot-pourri as all sorts of liquor were poured in. Cheers went on the whole evening; those who could drink toasted with the liquor, while those who could not toasted with soft drinks.

(Readers who are keen to book the house-boat and fishing boats, Click here to send a message to Baki's FB for booking. Guided horse tour of the mangrove swamps can also be arranged.) 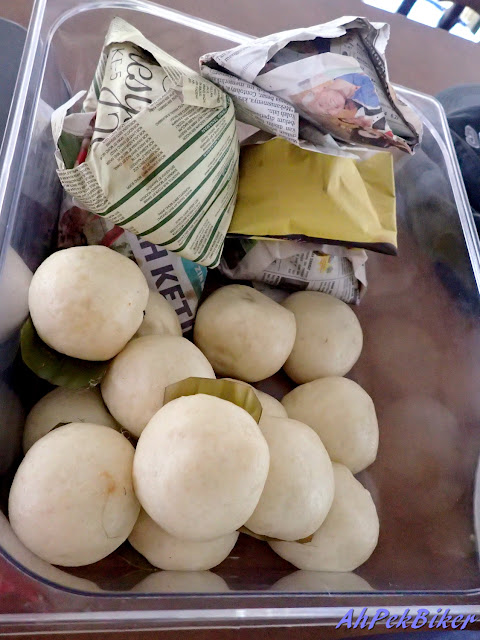 While many left for home, some of us stayed overnight at the boat house; sleeping soundly in the quietness of the kampung. In the morning we woke up to a pleasant surprise: Pak Janggut (one of Baki's close local friend) had brought over packets of delicious nasi lemak and a heap of Pau Kampung.
As we ate this simple yet delicious breakfast while trading stories about Malay ghosts. The stories did get rather scary especially as we were in rural village, and our hair stood on ends. Luckily we did not tell these stories the previous night, otherwise yours truly would have his imagination running wild and have a sleepless night.
We are now pumped up with good food and interesting stories:

Small Group Ride - Around Kampung Sementa.
The route will take us around the kampong to witness and experience life there; we would be visiting a goat farm, ride pass mangrove swamps and sugar plantations; and even did some bush whacking! 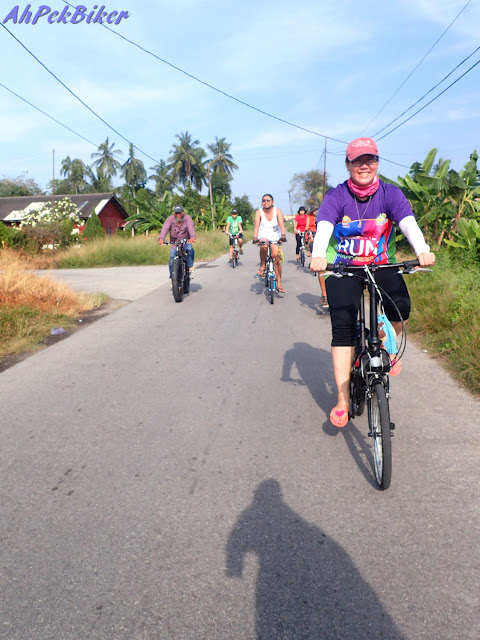 9:30am - Okay... okay... it was rather late to start off cycling... but we did have a great and late night the previous day.
With Pak Janggut  (and another friend, Hussein) leading us, we rode off from the house-boats heading down the quiet rural roads. The initial stretch had less houses and were not shady, still it was great to just get out and ride around this locality. 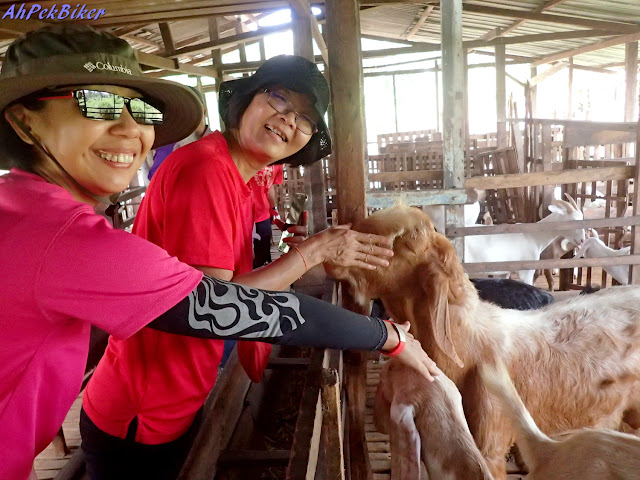 Our first port of call was a goat farm. Here there were several breeds of goats being reared. Some were for their meat, others for milk and a few others for their fur.
Most of the goats were cute and friendly, allowing our lady friends to pet them; like dogs they seem to enjoy the petting, they even liked their ears to be scratched. 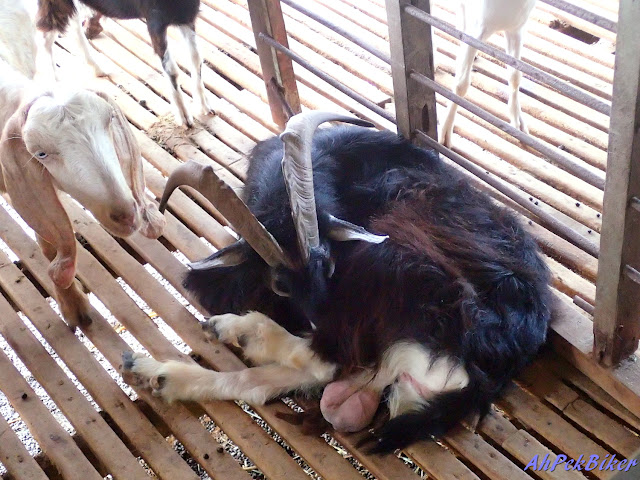 A couple of goats with angular long horns looked fierce and to an extent had a devilish look. Like this one, who coolly licked his gonads and just stared back at us. I for one wouldn't want to end up on the wrong end of this fellow. 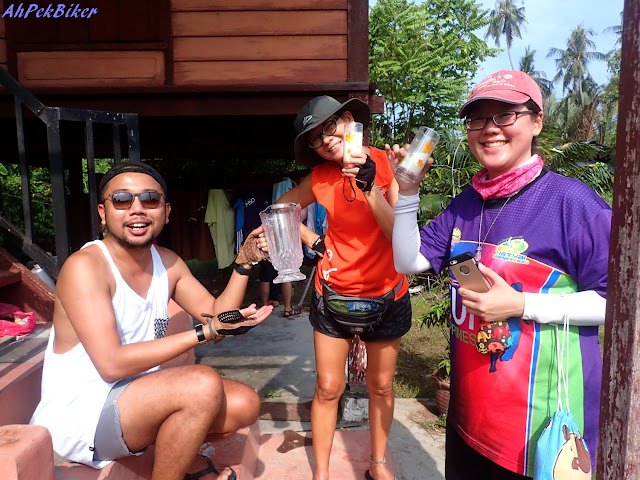 A bonus of visiting the farm: very fresh goat's milk straight from the tits.... Oops... I mean source. My friends here were enjoying the creamy drink; unfortunately I am lactose intolerant and so had to avoid trying to drink even a sip.
We had arrived late, otherwise we would had have the experience of milking the goats too! 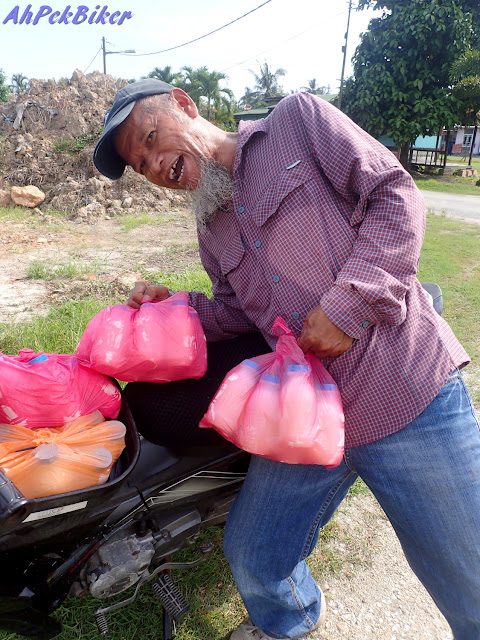 The farm also sells the milk in small bottles. Here's Pak Janggut displaying some of which my friends had bought; yup... other than leading us, he did provide courier service too. 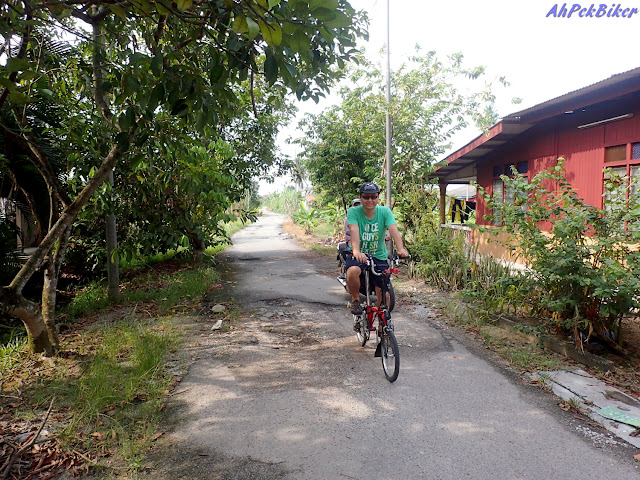 We passed the open planting areas and now approached the village area. Here the roads were more shady as the locals like to plant fruit trees nearby. 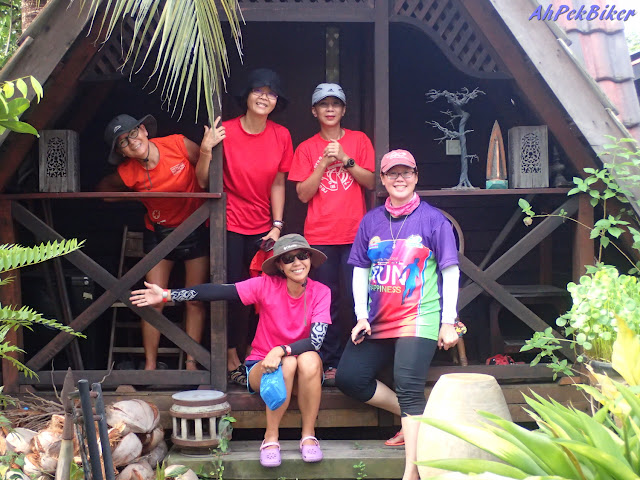 A short detour to Pak Janggut's house. It's a very nice house with lot's of planting and even some small pavilions, the girls posing in front of one. 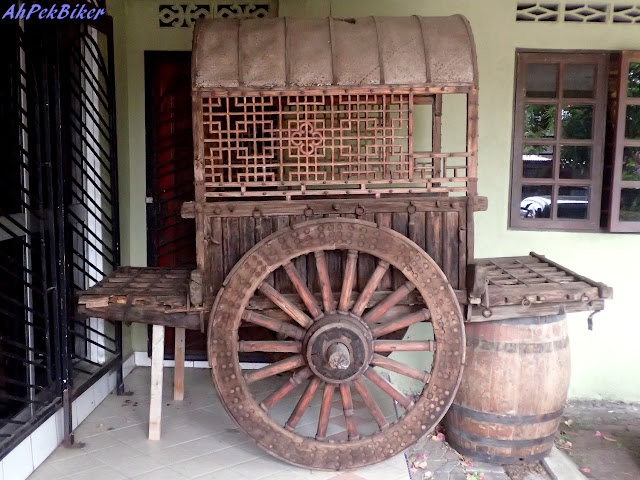 Pak Janggut was a collector of antiques of sorts. Within his compounds were pots, vases, knick-knack, an old wooden swing, and even this old antiquarian bullock cart, one that was probably used by royalty back then. 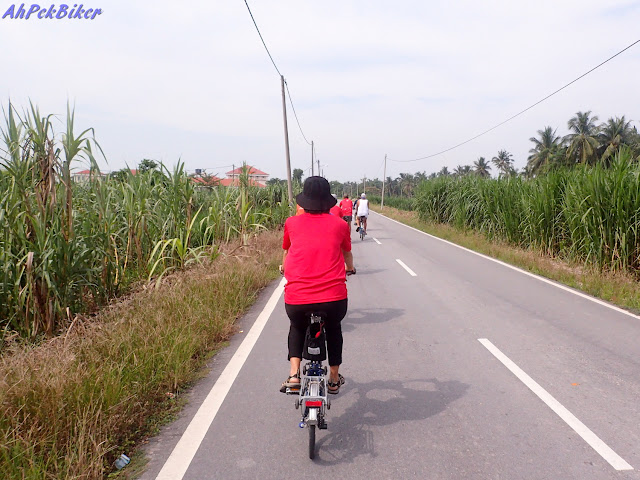 We are off again, to the fringes of the village; riding passed small sugar-cane plantations. I almost got mixed up, thinking all were sugar-canes. The ones on the left are; those on the right were tall reed grass or perhaps elephant grass. 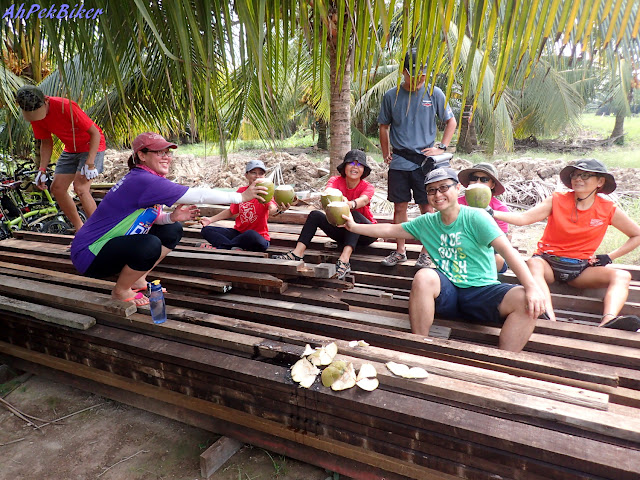 Next was a bit of off road riding into a coconut grove where Hussein plucked the coconuts and cut the top for us. Yes! Another item straight from the source, fresh and sweet. That's what we like about rural life here, all is natural, all is fresh - fresh prawns, fresh fish, fresh milk and fresh coconut. It's no wonder that the locals are so healthy. 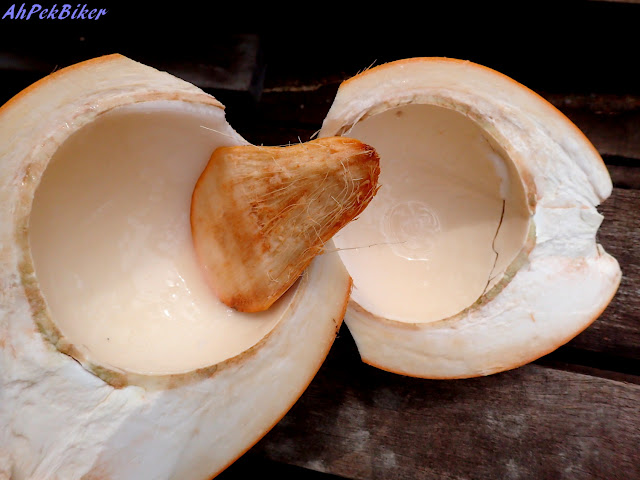 After each of us had finished with our respective coconut water (i.e. sucking it from the cut top), Hussein cut each into halves so that we could get at the succulent flesh. With a slice of his parang, he made a scoop out of the coconut husk... au naturel again! One must me wondering what's the big pile of timber that we were sitting on. It all belongs to Pak Janggut, including this other pile shown above (which included doors, window, balusters,etc). They are all part of an old house that he had bought in Perak, had it dismantled and transported down here. He owns the land where we were having the coconuts and will rebuild the house here. Perhaps we should pop by for a visit when it's completed and have another barbecue? 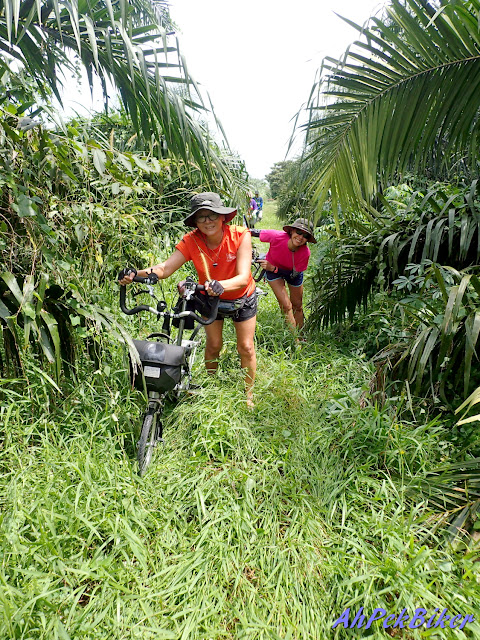 Bushwhacking time!
This was through a short cut that got us through very tall grass. "We could hardly cycled here, and later we found our gear sets full of munch grass. Grass not munched by the cows but by our gears! 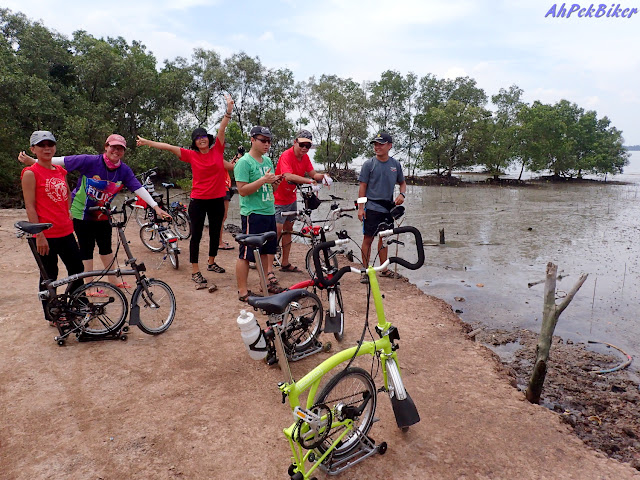 The grassy track led us to the sea-side edge of a mangrove swamp. More photo ops here! 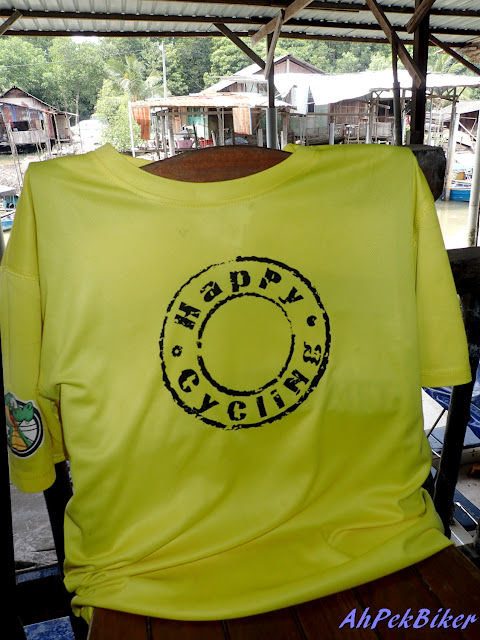 With that we rode back to the boat house had lunch (i.e. finishing off as much of the previous day's food).
It was indeed a Happy Cycling episode! 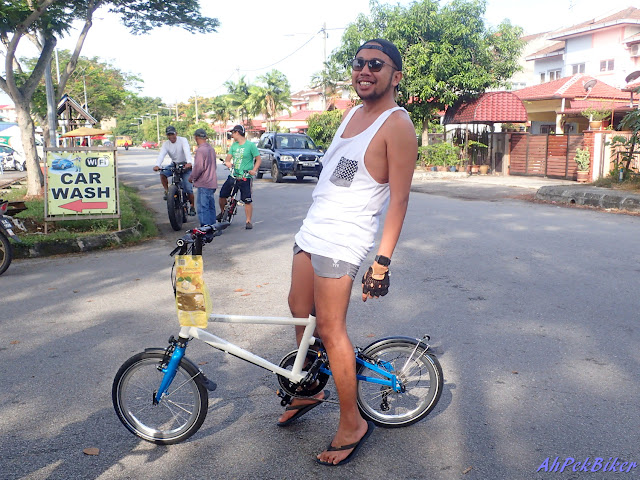 Many thanks to Baki for being a gracious host and sharing his boat house with us, and for taking time to show us around a nice kampong. 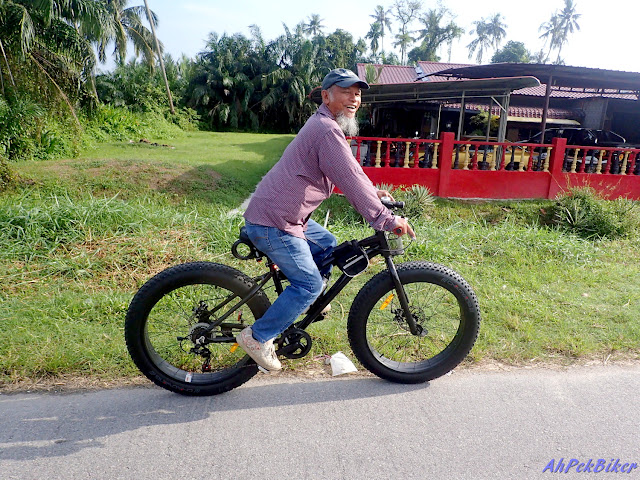 Pak Janggut for his warm welcome, the good nasi lemak and for leading us on the ride around his village. 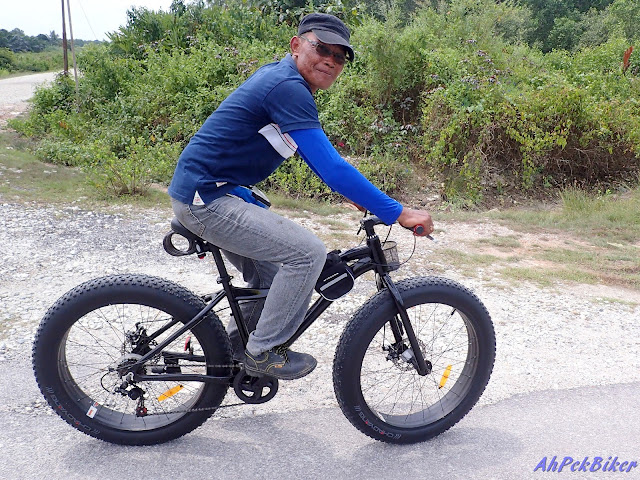 Encik Hussein for sweeping and the good coconuts.

You are at - Jotaro's Blog / AhPek Biker / Cycling Malaysia / Selangor / Kampung Sementa - A Rural Romp
If you like this, view my other blogs at Jotaro's Blog