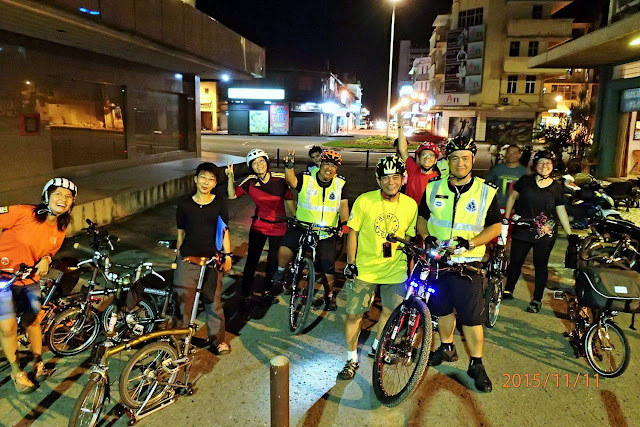 Route Recommendations :
1. This is a night ride, so there were not much we could see along the way.
2. The route we took were mostly along residential roads, only on some stretches did we use the main roads.
3. Traffic along the main roads travel fast, do ride with care and use your blinker lights.

This is page 1 of a 5-page blog, Click Here To Go To Title Page. 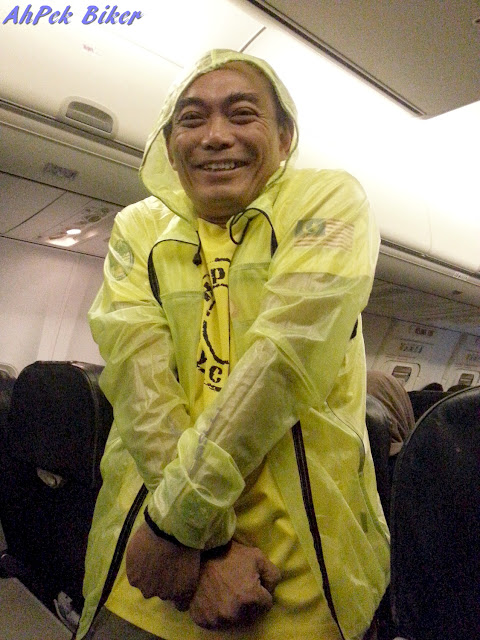 On a fine Wednesday afternoon, eight of us met up at the Kuala Lumpur International Airport all eager to start our adventure of cycling at The Land Below The Wind. Two of our friends have taken an earlier flight, and poor Albert could not make it due to some last minute work commitments. So there will be ten of us instead of eleven.
I had thought of taking Malindo Air which offers much cheaper tickets but had a restriction of 15kg free checked-in luggage. Some of our buddies were using hard cases and would need more than that; so we decided to fly via Malaysian Airlines which gave 35kg of checked in luggage with no extra charges. Together with free food, drinks, on-board entertainment, and more comfortable seating, it was worthwhile paying the slightly higher air-fare.
The only thing was, it got rather cold about an hour into the 2-1/2 hours flight. They had run out of blankets, so we improvised by wearing our cycling rain-coats to keep warm.... Brrrrrr! 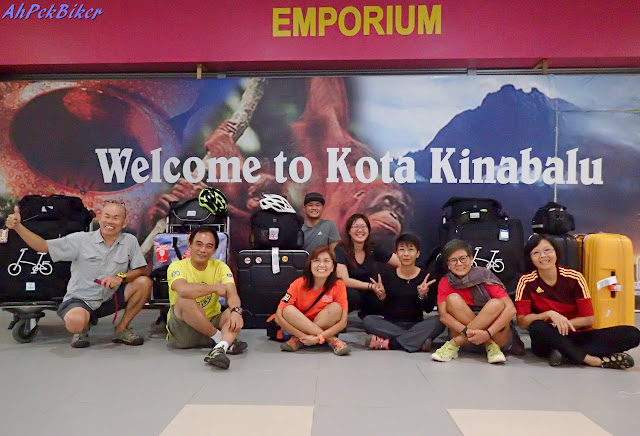 We took the 6:00pm flight and by the time we arrived at Kota Kinabalu International Airport  and cleared immigration it was close to 9:00pm. Yes, we had to clear immigration. See, Malaysians from the Peninsular have to get a visit pass by showing their identification cards, this allows them to stay in Sabah for up to ninety days. This pass should be kept properly and have to be surrendered upon exiting the state, should one lose it then a report has to be made at the police base in the airport.

Ride route - Kota Kinabalu International Airport>Queen Elizabeth Hospital>Borneo Backpackers.
We were suppose to use a shorter route that would take us along busy highways and main roads. Instead we followed Sin's (of the hApPy HaPpY blogs) GPS that took us through quieter residential roads and even passed the Queen Elizabeth Hospital. 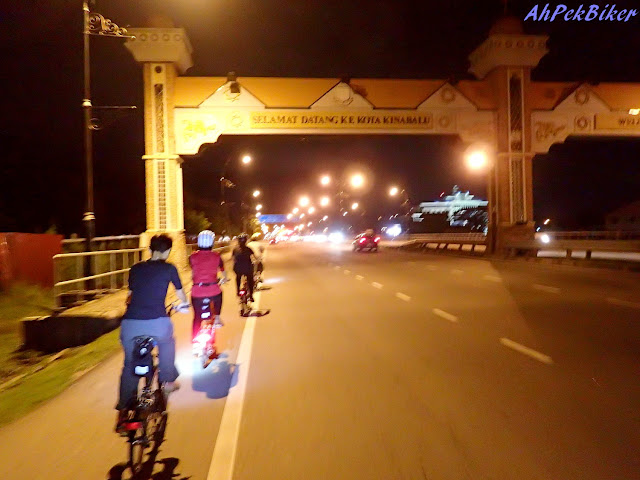 Anslem & Amy came with a pick-up truck to meet us at the airport. We quickly unpacked and unfolded our bikes; our bike bags and soft/hard cases were loaded up into the pick-up. Anslem gave us instructions on the route to ride to the city: "Exit the airport and turn left, further in front, at a fly-over, don't go up but instead at the bottom turn left. Follow the road and it should lead straight to the city". "Okay" we replied.
9:30pm: We rode off, following the instructions and headed down Jalan Kepayan. 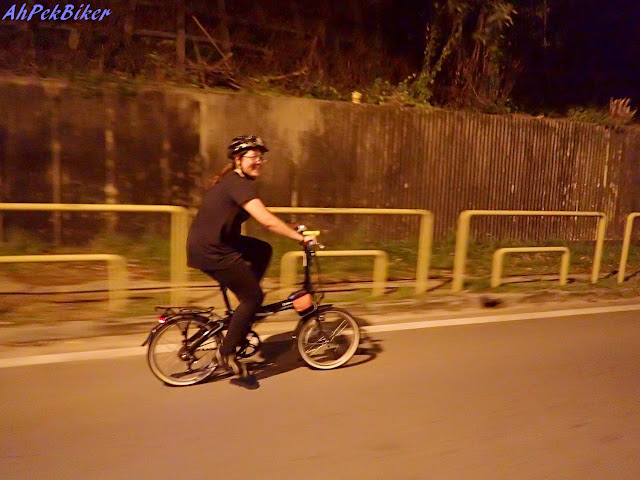 Suddenly, not too far from the airport, Sin who was leading us, made a left turn into Jalan Pahlawan..... Hmmm? There is no fly-over here! So much for following instructions.
Ok... it doesn't matter, he's leading us so we don't question, just follow and put our fates into his hands. But it was okay, his route took us through many twists and turns through residential roads which had less traffic. It even took us pass the Queen Elizabeth Hospital. Well... at least we get to see the main hospital of Sabah and we get to ride more safely. 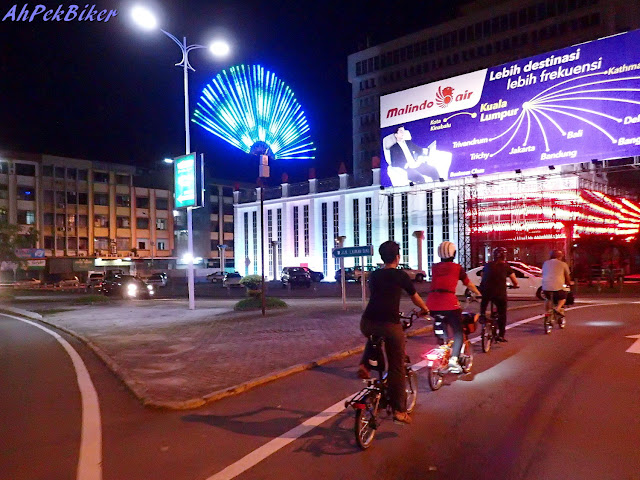 We rode through the dimly-lit residential roads... and then suddenly ahead we saw bright lights... colourful lights. Hey! We are in the city already! And it only took us thirty-five minutes to ride down. 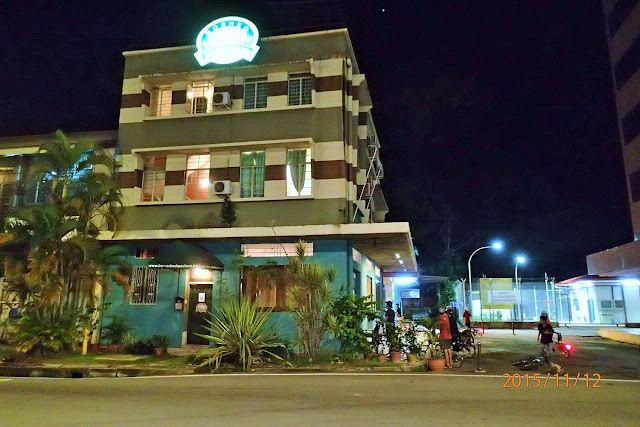 Suddenly Kimmi shouted, "Sin, stop.. stop!" We had arrived at our destination, Borneo Backpackers, coming via Jalan Padang, the road at from the back. The above photo shows the front brightly lit view, at the back there was only a small signboard; we had almost missed it!
Anslem was already there with our luggage. So was Baki and Jason. They were most glad to see us and were soon giving each of us welcoming hugs. 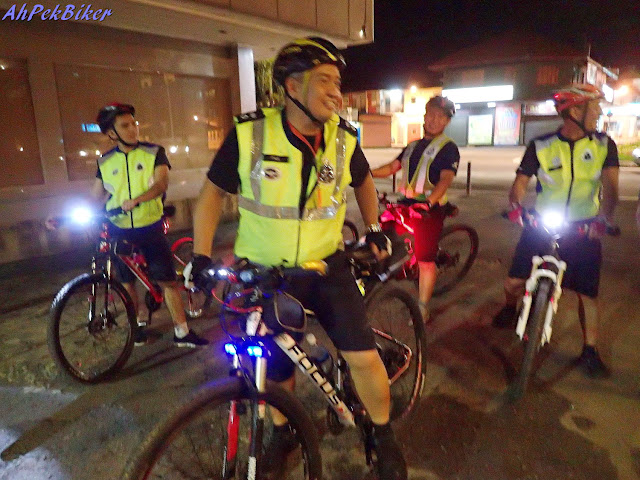 As we unloaded our bags, a group of cyclist came cycling by, they were friends of Anslem. It's great to meet local fellow cyclists, and what more they were cycling cops patrolling the streets of the city. We will definitely feel safe cycling here. 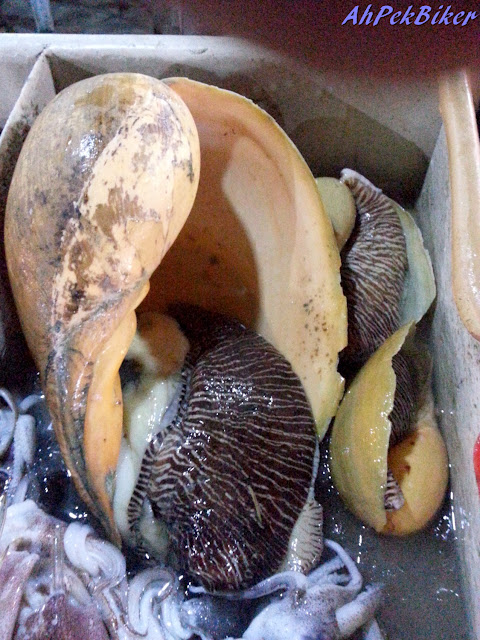 We checked into our rooms, left our luggage and soon left for a late dinner... or make that supper, as by then it was 11:00pm. It was a short ten minutes cycling to the Night Market where we will be having our eats. It's an open market where with all sorts of seafood - many varieties of fishes, huge prawns, lobsters and more! There were even exotic ones like huge cockles, slipper prawns, and giant Sea Snails like the one shown above which was easily two feet long. 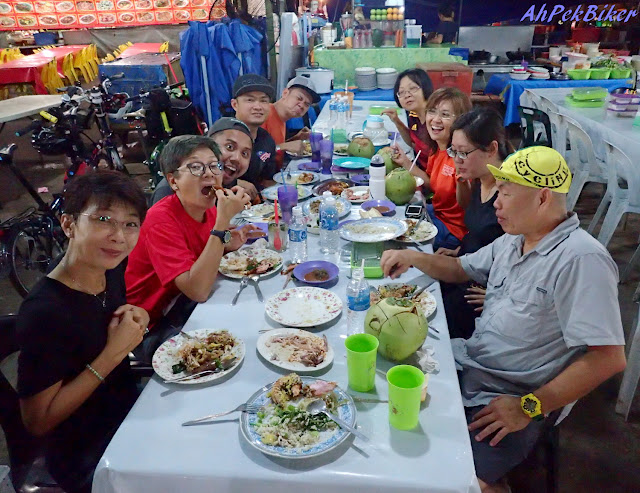 Nope, we did not have those exotic fare. We played it save and did not want to put our tummies through any misadventures as we will be having a long, hard day of cycling the next day.
Till tomorrow then, Good Night.

This is page 1 of a 5-page blog, Click Here To Go To Title Page.