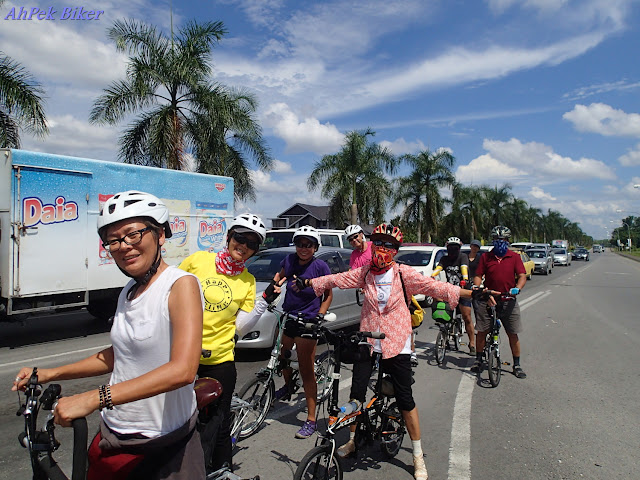 Route Recommendations :
1. During the mid-year hot season, the weather can be hot. Start off cycling early and end early to avoid the heat. or do cover up accordingly. If going on longer rides re-hydrate frequently.
2. Sarawakian drivers are generally courteous to cyclists, but do still cycle with care.
3. At some of the sub-urban areas there are cycling lanes, while at some main roads there are motorcycle lanes suitable to cycle on.
4. Interesting food that we tried:
- Sarawak Laksa (both the Chinese & Malay versions).
- the renown Sarawak Kolo Mee.
- relatively good seafood.
5. Parking at Putrajaya Sentral is much cheaper than the Kuala Lumpur International Airport. From there one can take the fast ERL Transit train to the airport terminals. 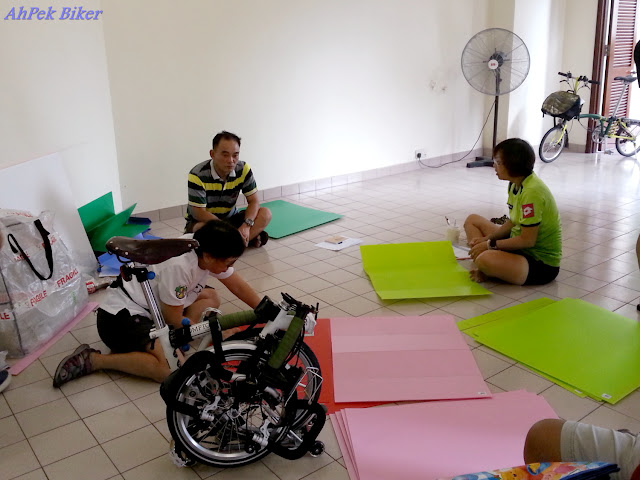 As some of our friends had never travelled by air with their bicycles, a few weeks before leaving for Sarawak, a couple of group sessions were held to acquaint them with how to pack their bikes for travelling by air. These sessions were held at Fenn's place and conducted by Nash & Jotaro. 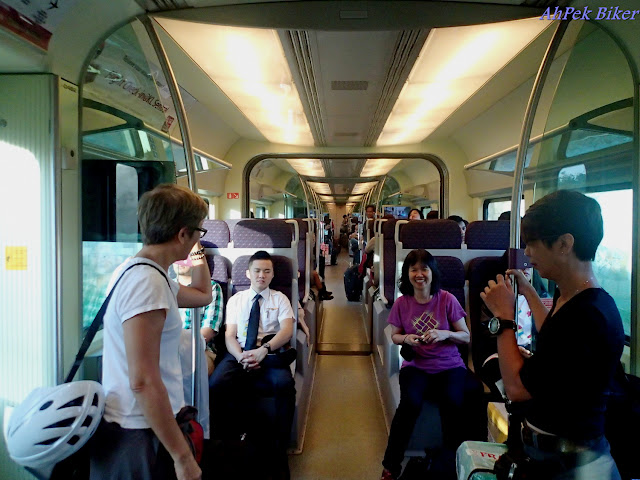 Many of us parked at Putrajaya Sentral's Park & Ride facility. Short of getting someone to drop you off at KLIA or KLIA2, this is the better alternative as parking here is much cheaper at RM4-00 per day for the first five days. The KLIA Transit train fare from here to KLIA is RM6-20 one-way. Compared to this, parking at KLIA's carpark is RM144 for the first four days.
We also flew via Malaysian Airline System (MAS), booking early we managed to get a good fare of around RM400-00 return. Compared to budget airlines, flying by MAS meant we had more comfortable seats with light meals provided. The baggage allowance of 30kg that include sports equipment also meant that we did not have to pay extras to bring our bikes along. All in it was a better deal than flying via a budget airline. 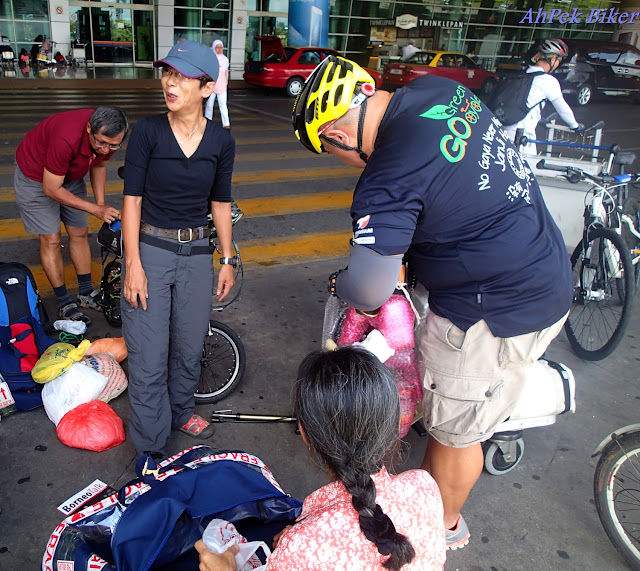 12:30pm - After an hour and a half flight time, we were unpacking and unfolding our bikes after landing in Kuching International Airport. All our bikes are in good order, none damaged by rough handling.... Phew!

Ride Route - Kuching Airport>Kampung Siol Kandis. (Note: this ride map is only from the airport to our homestay. Did not track our ride in Kuching City, apologies. 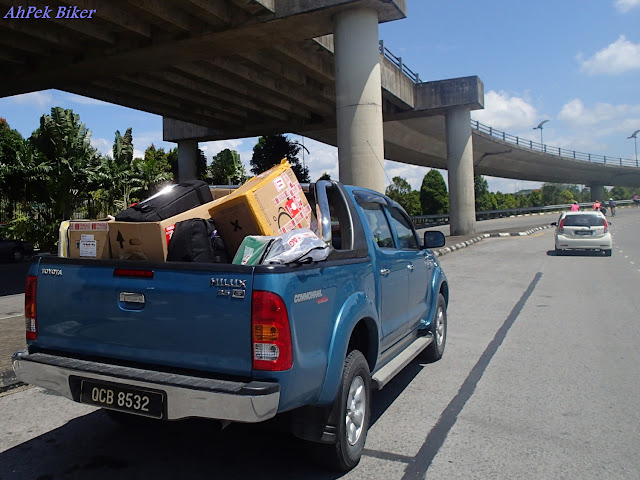 Many of us had packed our bicycles into boxes, padded bags for air transit. These boxes/bags would be to bulky to carry on our bikes. Fortunately, Freda had come with a pick-up truck, and all these items were loaded onto the truck together with some of the heavier luggage. With that we cycled off to face the baptism of our first time cycling in Sarawak. IT WAS A BAPTISM OF FIRE!
The main roads in Kuching are beautifully clean and well maintained. What was lacking was shady trees. It's the middle of the year, the hot season in Malaysia. When I say hot I meant really hot, with temperatures soaring up to forties. The mid-day sun furiously glared down on us, scorching us; but we stubbornly pedalled on.... Why? ..... because we were hungry! Hah! Time for lunch. 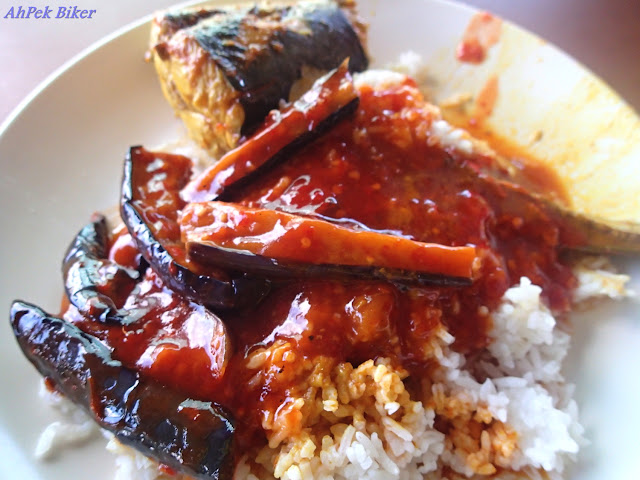 Fortunately lunch at Taman Satria was not too far away; but then a bit of a hiccup. Gawai time is a good time to visit Sarawak to see the colourful celebration by the natives; but it was a holiday of a few days and most local eateries were closed. We had to check out a few before finding a food court that was opened, still more than half the stall were closed. While most of my buddies had the famous Sarawak Kolo Mee here; I accompanied Nash, cycling further down to a shop selling Malay rice. It was not the best of meals, but my hungry stomach was not complaining. 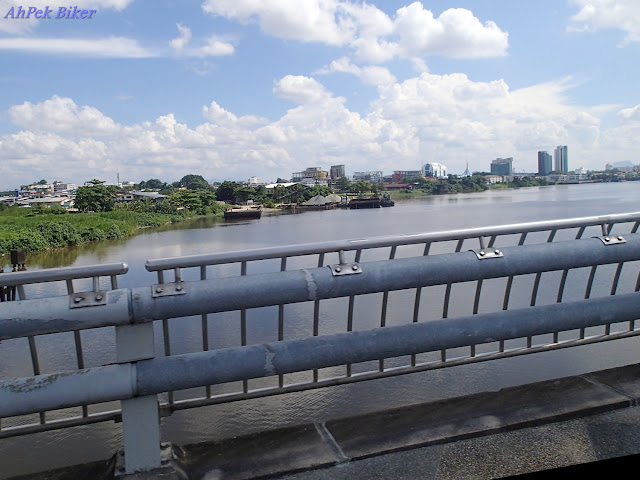 In the hot afternoon we continued on. Pedalling across the Pending-Petra Jaya Tolled Bridge, we peered at down-town Kuching with a satisfaction that our destination was getting nearer. 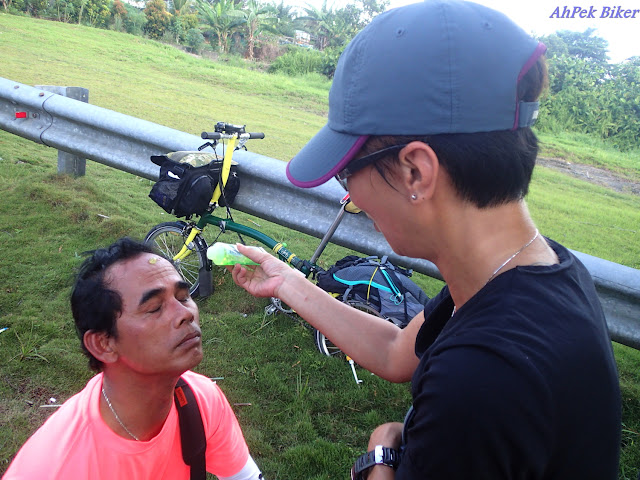 The heat was getting to most of us. Just after the toll plaza, at a shady area, we made a longer rest stop. Nash was on of those badly affected by the strong sun, fortunately Kimmi was on hand with some Aloe Vera gel to apply onto his sun-burnt face; the cooling gel was soothing and resuscitating. 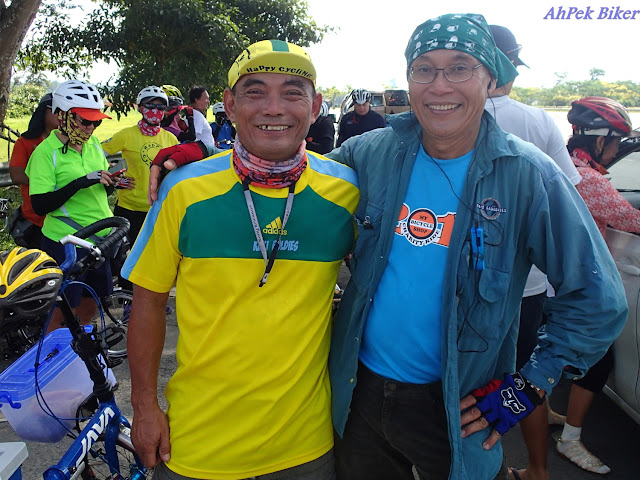 Here too I met Simon, a Sarawakian he had previously come over to Johore Bahru and cycled to and around Singapore with some of our Malaysian friends. I did not had the opportunity to join them then and was glad to meet up with Simon now. 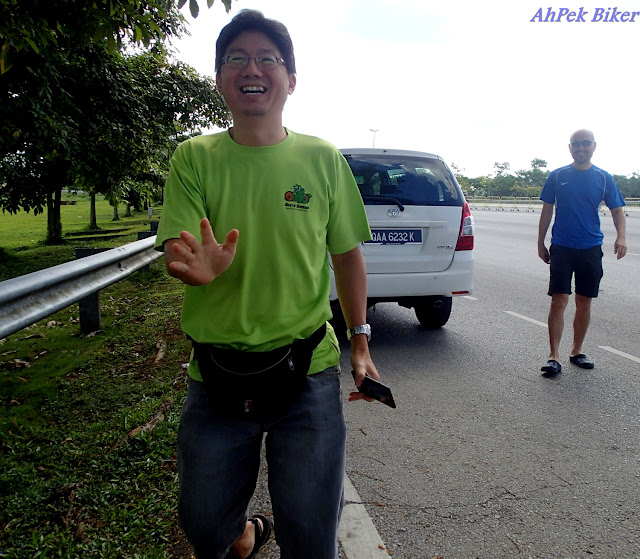 Met Allan here too, he reads my blogs regularly. Both he and Simon had gone up to fetch LK who had flown in from Singapore on a slightly later flight. 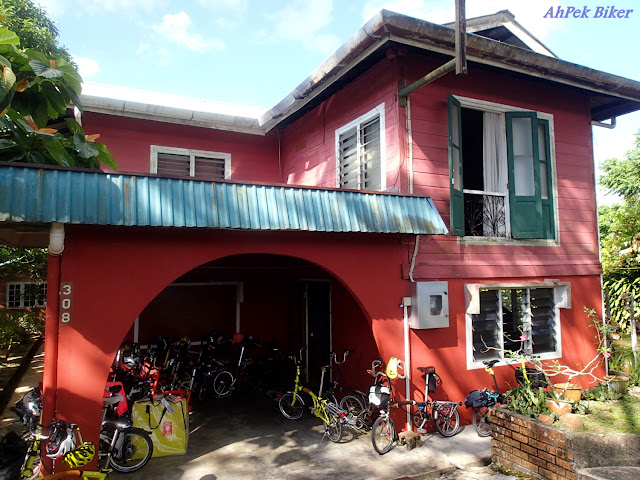 3:30pm - After cycling in the hot weather for close to twenty kilometers we reached our homestay at Kampung Siol Kandis. It was a short ride and a good introduction to cycling in Sarawak. 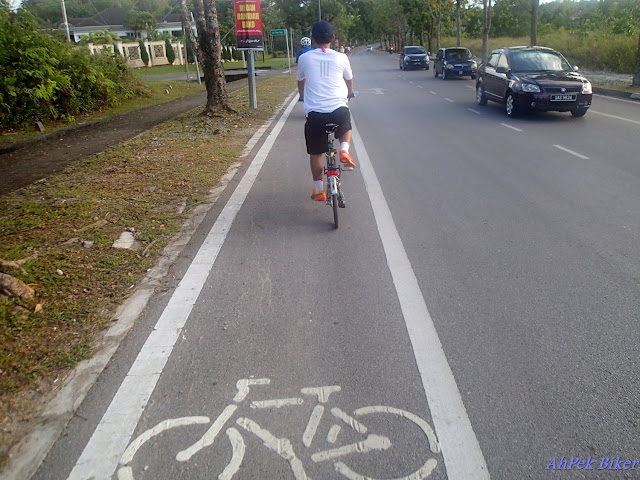 After unloading our luggage and unpacking our bikes, we were eager to explore the neighbourhood, and what better way to do it than cycle. We rode down towards the Demak Commercial Centre. To our delight there were cycling lanes at the main roads here. 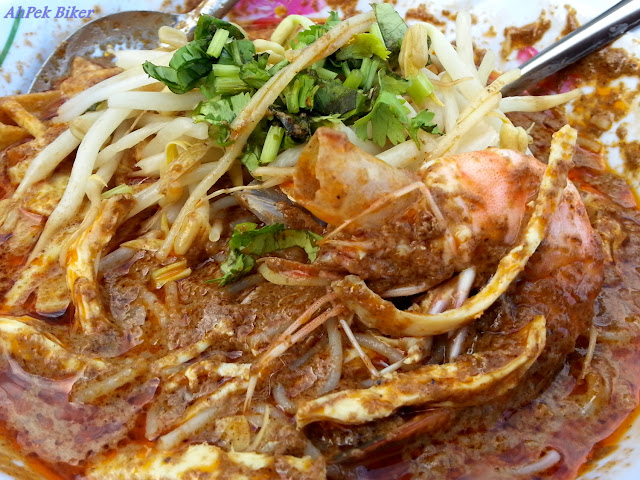 That ride was an excuse to go savour some more good Sarawakian food.
At the Demak Commercial Centre, we were fortunate that a food court was opened and finally I did manage to try a good Sarawak Laksa. This was the Malay version, with soup of thick santan, it was so good that I slurpily finished the soup. 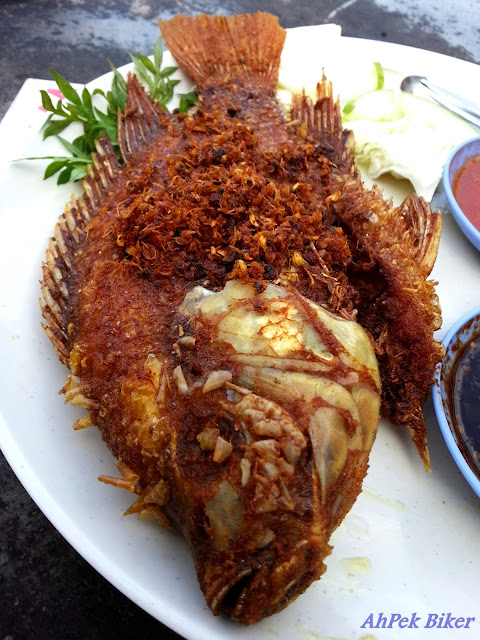 We also had this deep-fried Tilapia which had been seasoned with yellow ginger and garlic. Normally I don't like tilapias fishes finding their meat soft and lacking in taste. This one here was different - with firm and sweet meat. It makes me wonder whether wild tilapias here in Sarawak are better. 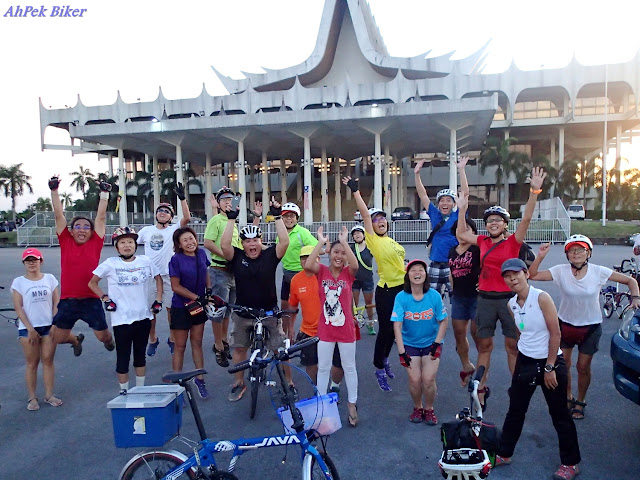 Back at the homestay; we rested, freshened up and were ready to go again. Riding out to the new State Assembly Building, we took some photos there, including this jump shot... well an almost-jumping shot anyway. 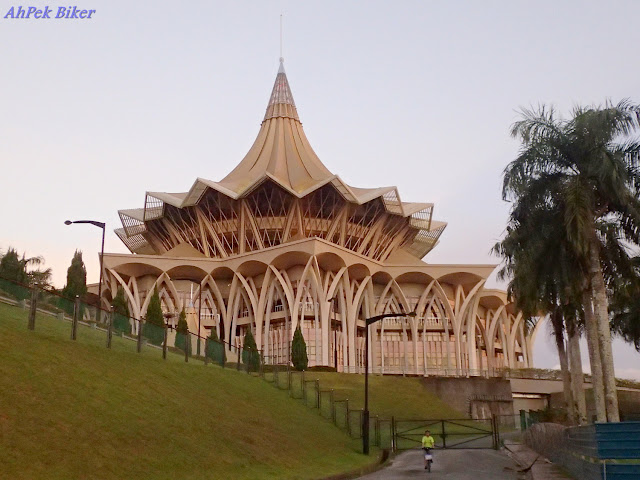 The State Assembly Building, with a golden shimmer in dusk's setting sun. An interesting piece of architecture blending arches with a dome that takes after a native hat. 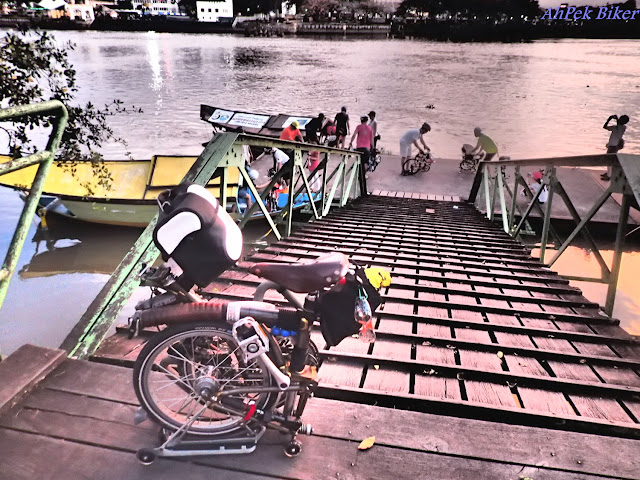 At the nearby Istana Jetty, we folded and loaded our bikes onto river-boats that will take us over the Sarawak River to the Batu Jetty. 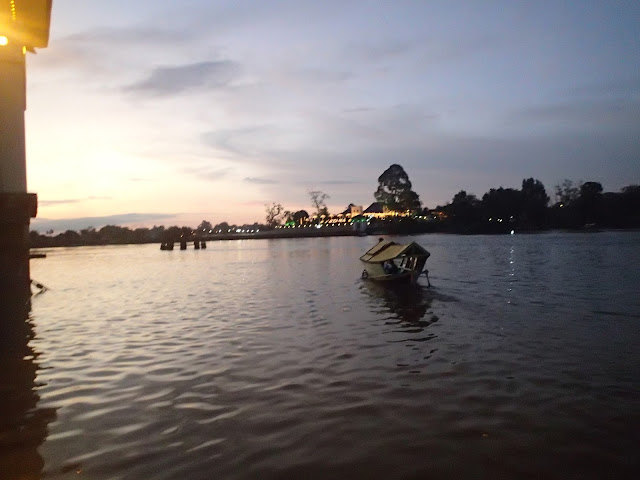 And just like that we were in Kuching town centre. This is a faster and shorter way, the alternative is to ride a longer loop and enter via the Tun Haji Pattingi Bridge. Cars will have to do that, but we on bicycles can take the passenger-boat short cut! 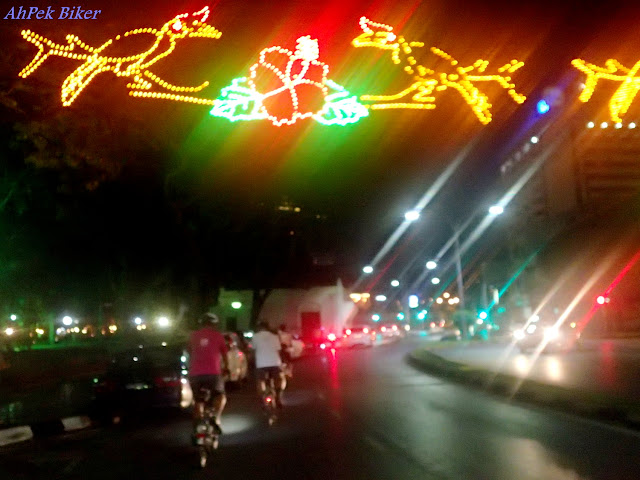 Cycling on the roads of Kuching is not too bad, the drivers are courteous to cyclists on the road and often we see them giving way to let us pass. 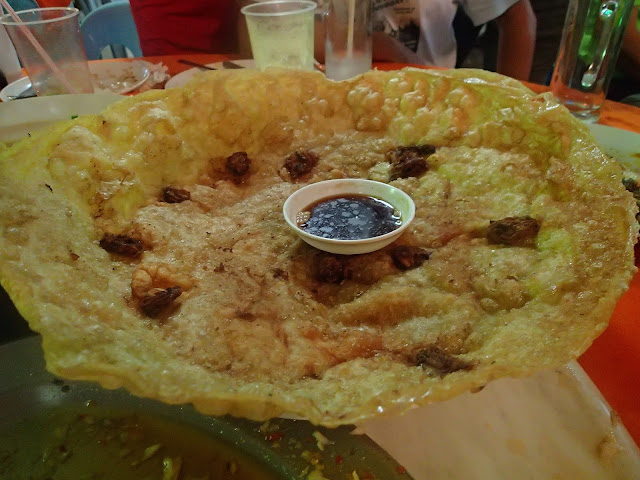 Dinner was at the Bukit Mata Seafood within the Top Spot Seafood Centre. We had good and relatively cheap seafood (crabs, prawns, fish, etc); the highlight for me was this unique oyster pancake that I had never tried elsewhere. The flavour of the oysters had infused into the pancake making it very tasteful indeed.

With dinner over, instead of crossing by boat, we took a longer ride back.... have to burn off that heavy hearty meal *smiles*.
It was a good introduction to Sarawak for us: good food and also how to cope with cycling under a hot, unforgiving sun. We all looked forward to the next day as it will be GAWAI DAY!

This blog comes in a several parts. To go to other parts click on the following link to return to the summary page:
- Cycling Sarawak Gawai 2015.