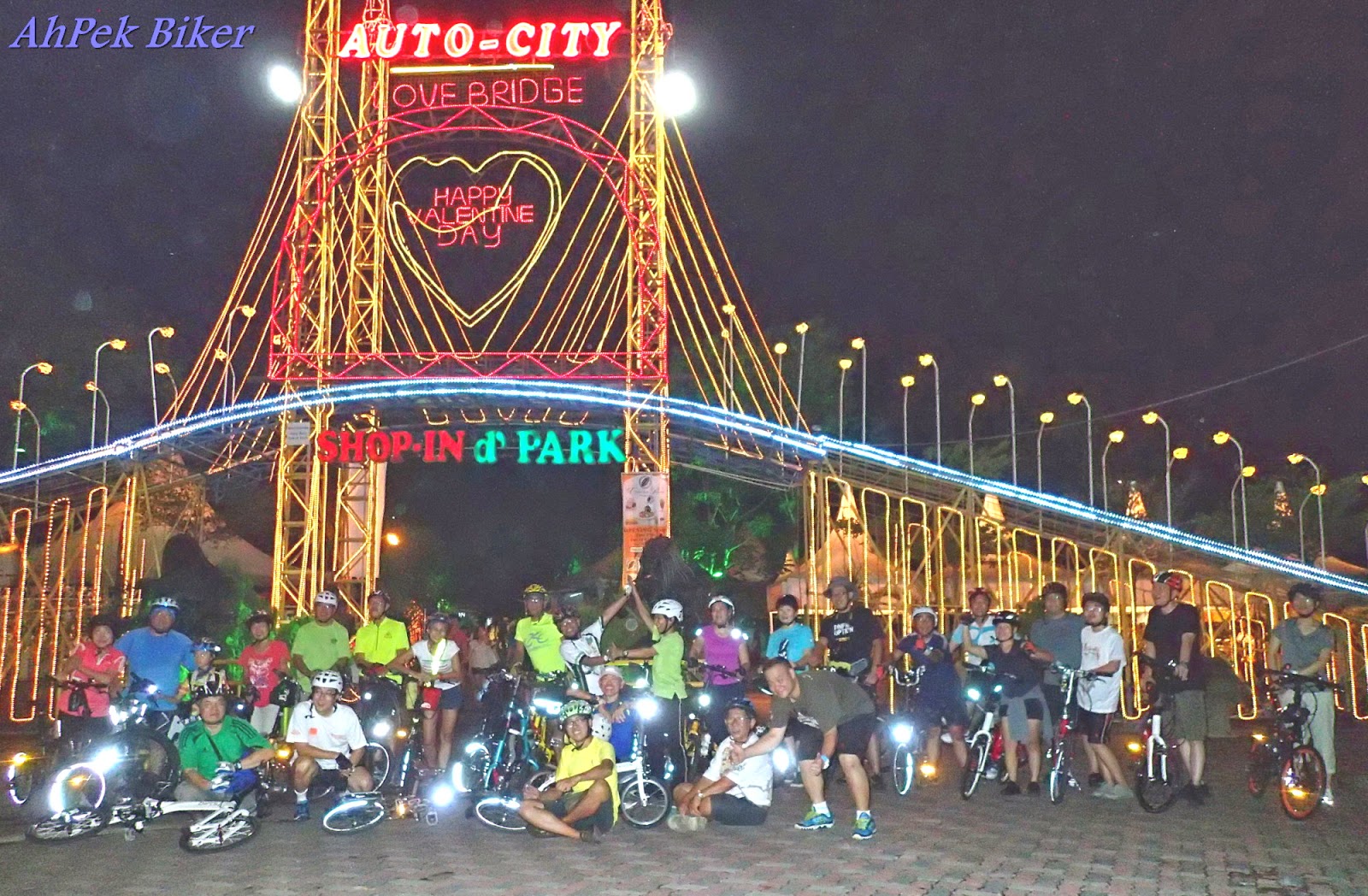 Route Recommendations :
1. There is heavy traffic along the route and many motorists are impatient, so do ride with care.
2. Bukit Mertajam has many good eats, don't miss out the Mee Kuah Ketam.
3. Auto-City is like a mini trade fair, if time permits go in and do some shopping.

We are up in Penang for the 2nd Penang Bridge Ride, a ride that will be historical for us. But that ride won't be starting from Penang Island and will instead start at Batu Kawan on the mainland. As such, most of us will be staying on the mainland. Being at a "virgin territory" (i.e. where cycling is concerned) we were keen for a pre-ride around here. We thought of riding from Batu Kawan over to the Bukit Mertajam (affectionately know as BM by the locals), but then most of us will be reaching Batu Kawan in the late afternoon and any pre-ride would be a night ride. 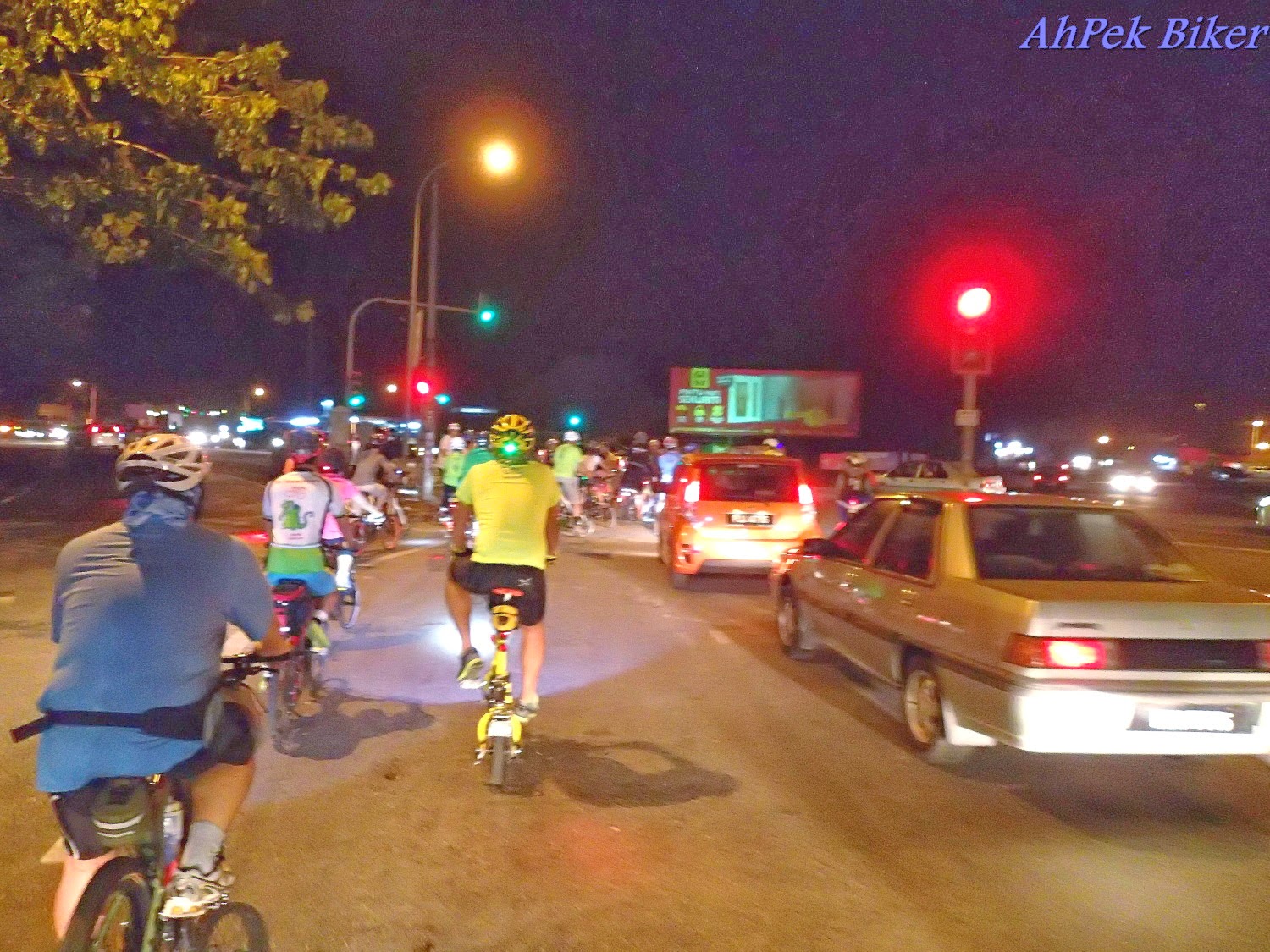 Chin did some homework with his BM friends. Riding to BM via the kampong roads in the evening light would be ok, but returning at night would be a bit hazardous as there are many pot-holes and the kampong streets are not lighted. Riding along the highway was also a no-no; traffic is just too heavy there. 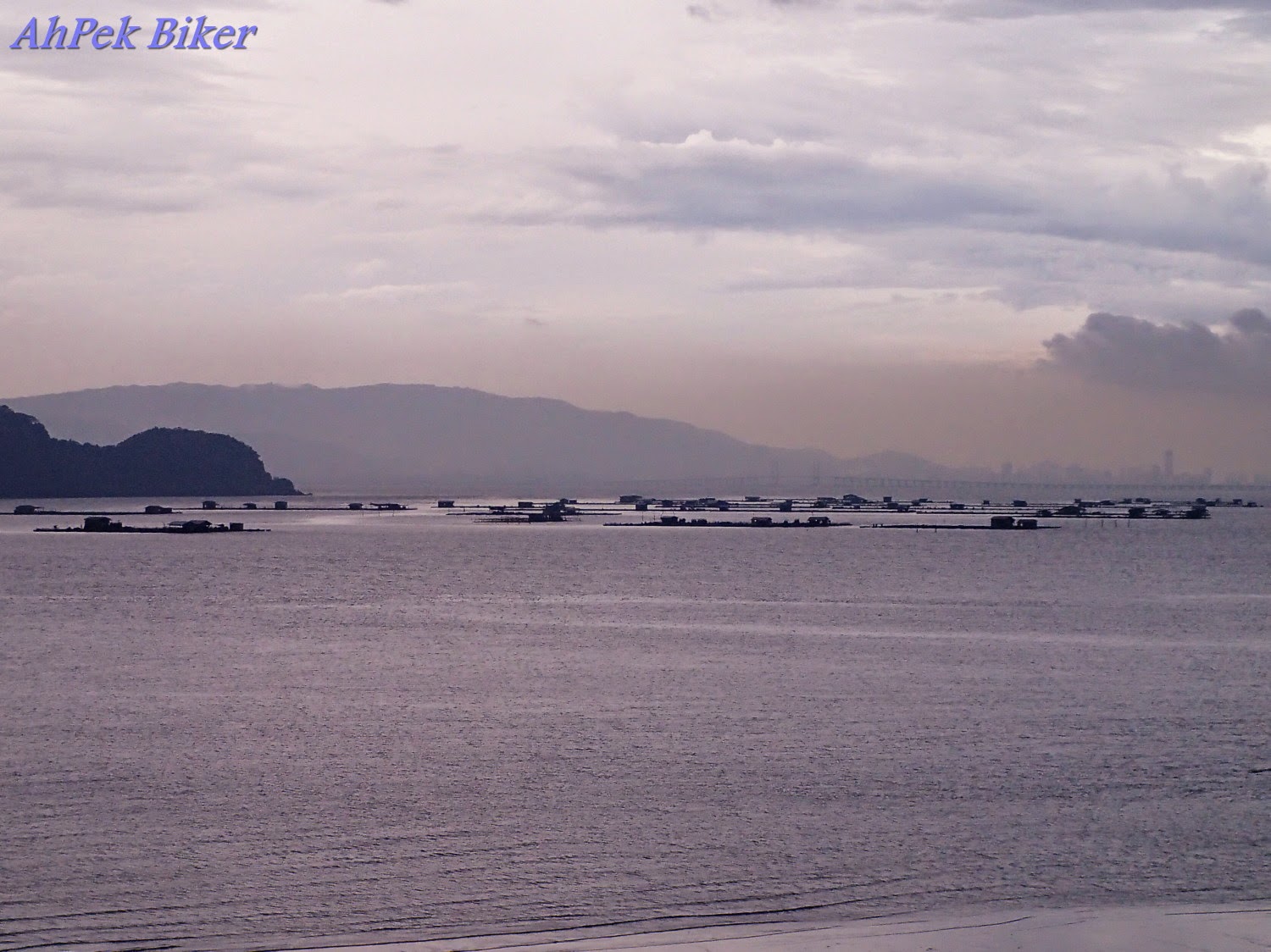 As the pre-ride will be a fairly large group of 26 of us including two children, we decided to drive over to meet BM to meet our Penang friends, have dinner there and then have a quick ride. En route we stopped at the Pulau Aman Jetty where there was a nice view of Penang Island. Many sea fish farms can be seen floating in the sea with the Komtar Tower in the background on the far right. 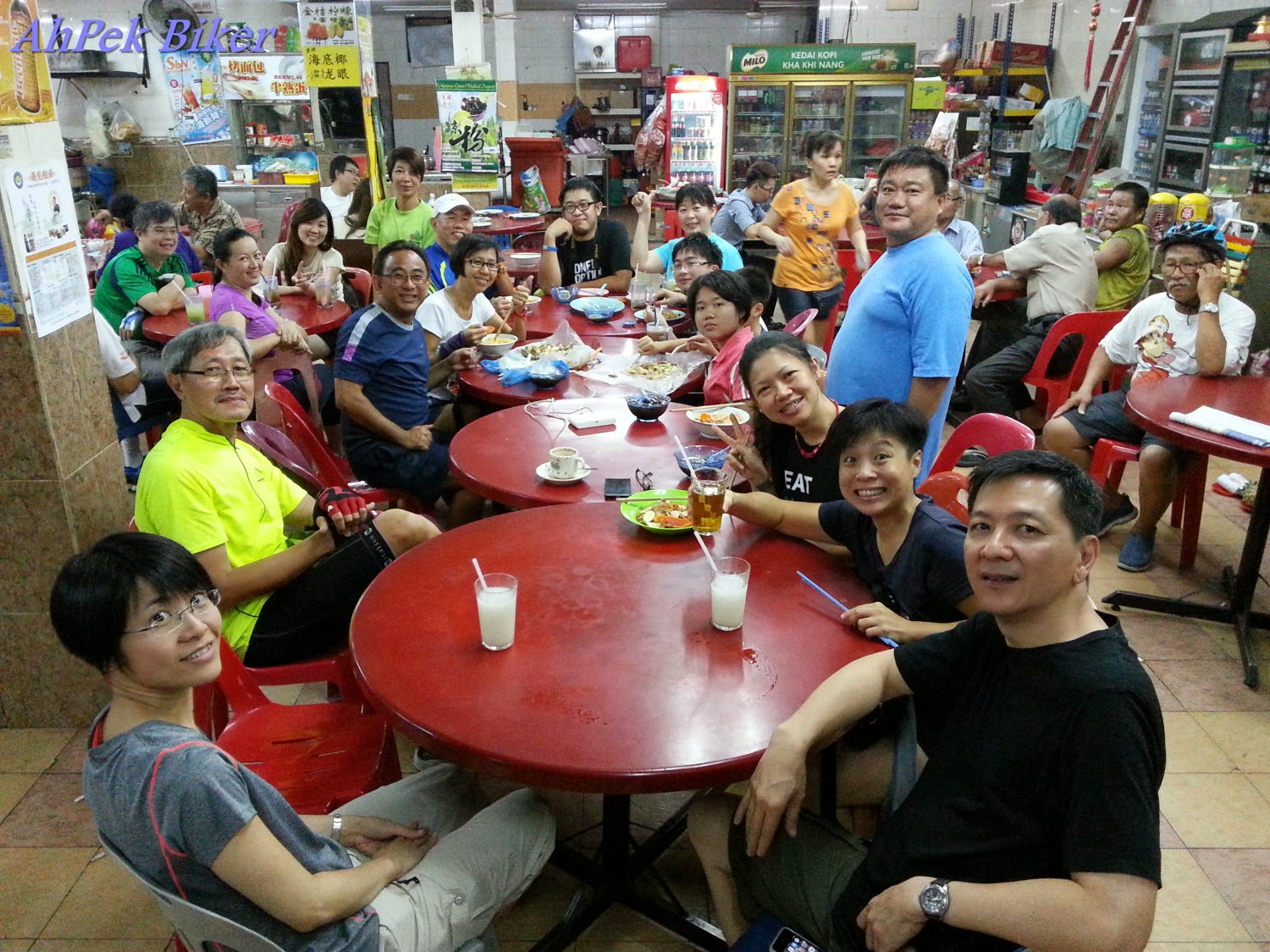 Here we are waiting for dinner to be served at the coffee-shop in BM that has the cute name of Kha Khi Nang Coffee Shop, which means "Close Relatives Coffee Shop". It can't get more friendlier than this.
You must be wondering why this blog is titled the Big Foot Mountain Ride. Okay, there are no Big Foot here. It's just a play on the Hokkien name for BM which is "Tua Sua Kah" meaning "Big Mountain Foot", you get the meaning right?

And I was in for a pleasant surprise! Here too I met Gary; it's been a while since I rode with him & his family (i.e. at the Penang Laksa Hunt Ride). If I am an AhPek, then Gary is even an older one. I salute you Gary, it's great to meet you & you family again!

View Bukit Mertajam Night Ride Route Map in a larger map
Ride route - Bukit Mertajam>Bukit Minyak>Auto-City & back.
As the following day will be the important 2nd Penang Bridge Ride, our hosts decided decided to make the ride a short one riding from BM along some of the main roads to Auto-City and then back. It's not a long ride but at least some of us can now say we have rode in BM before. 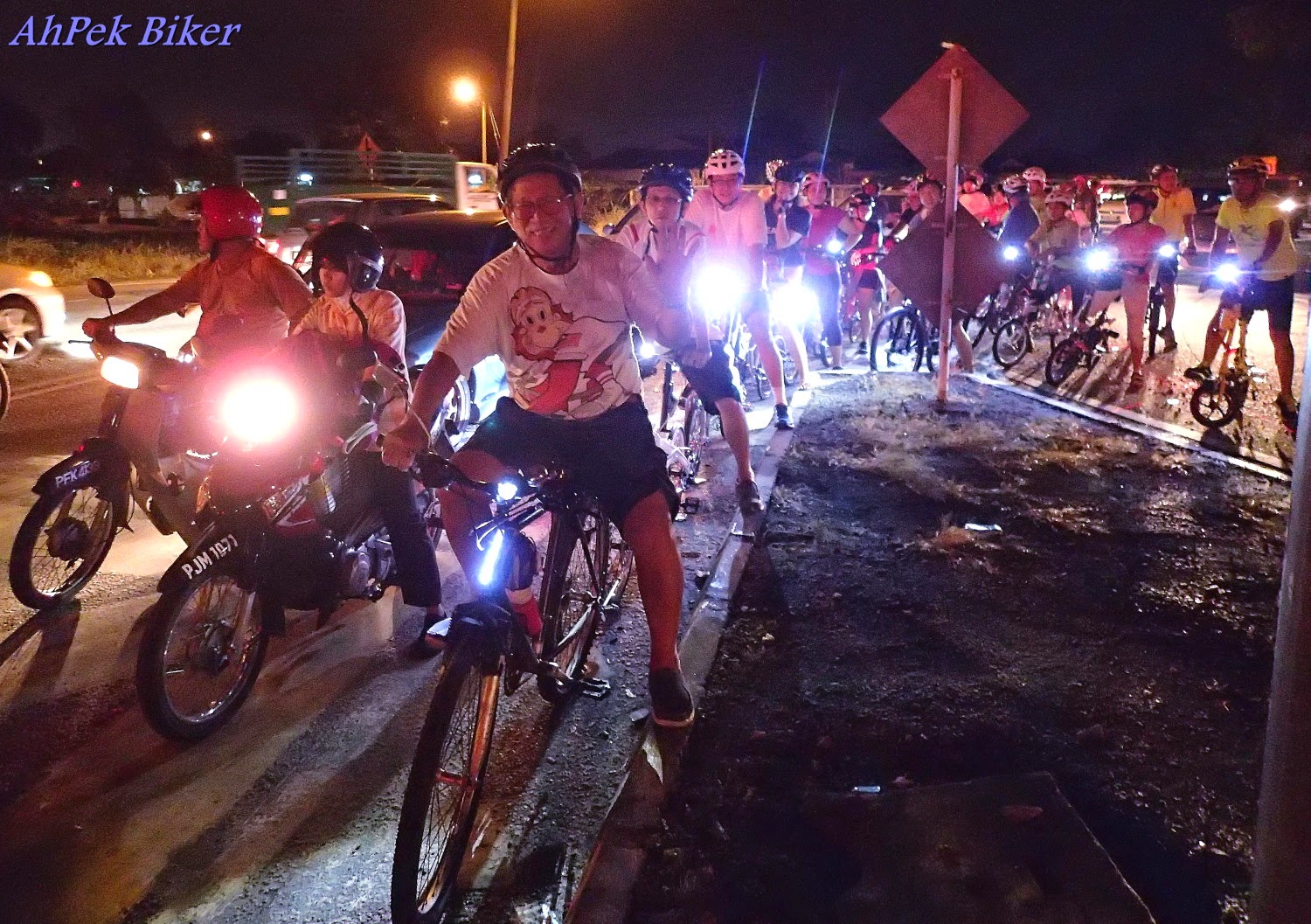 With dinner over, Gary led us of on the ride. Gary is an active member of the group called the BM Night Rider; they ride regularly every Thursday night. 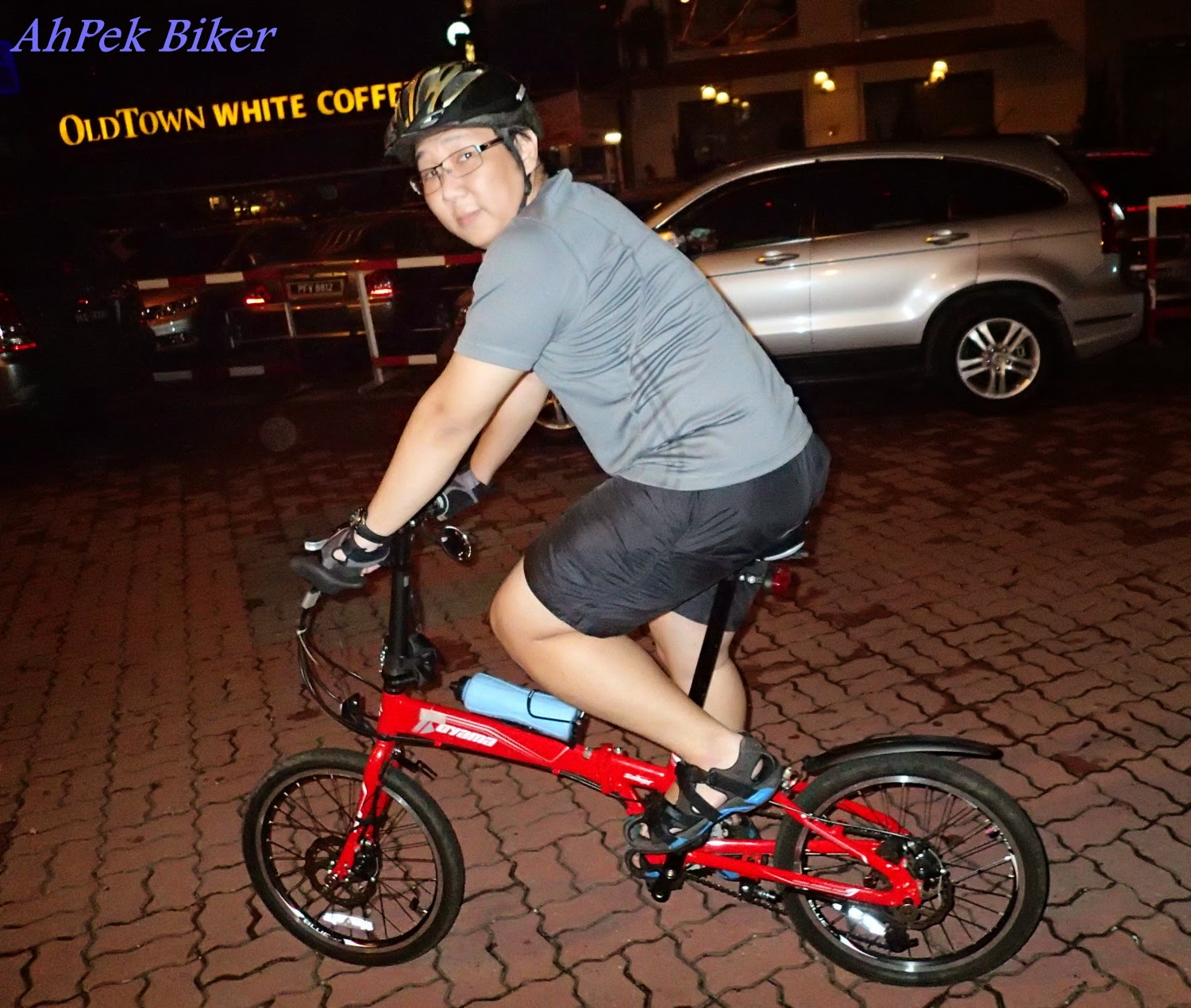 Gary's son, Timothy will be the sweeper and Larry will be marshalling. Together they will keep us safe during our ride. 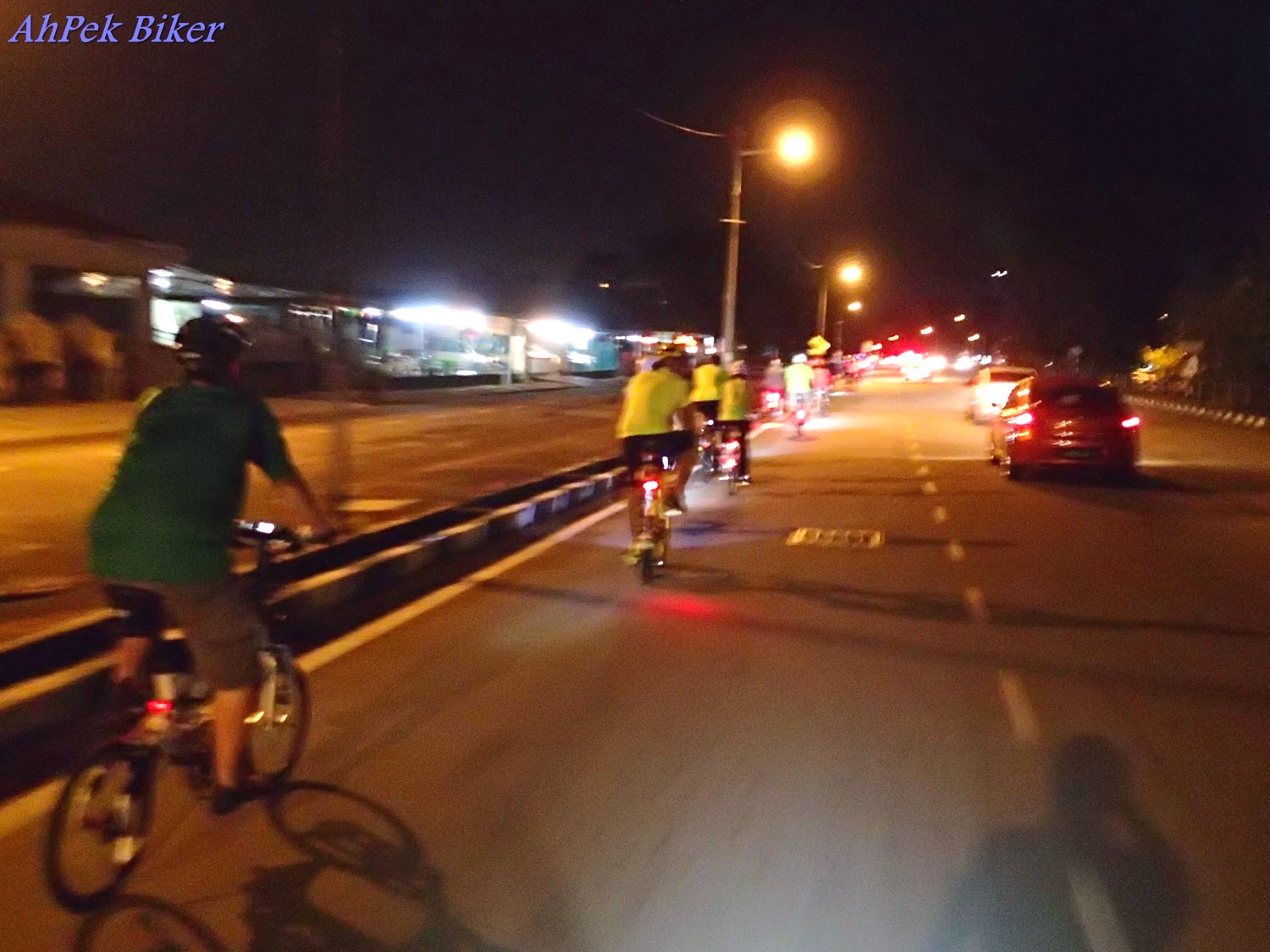 We started of at the residential roads around the Kota Permai area... 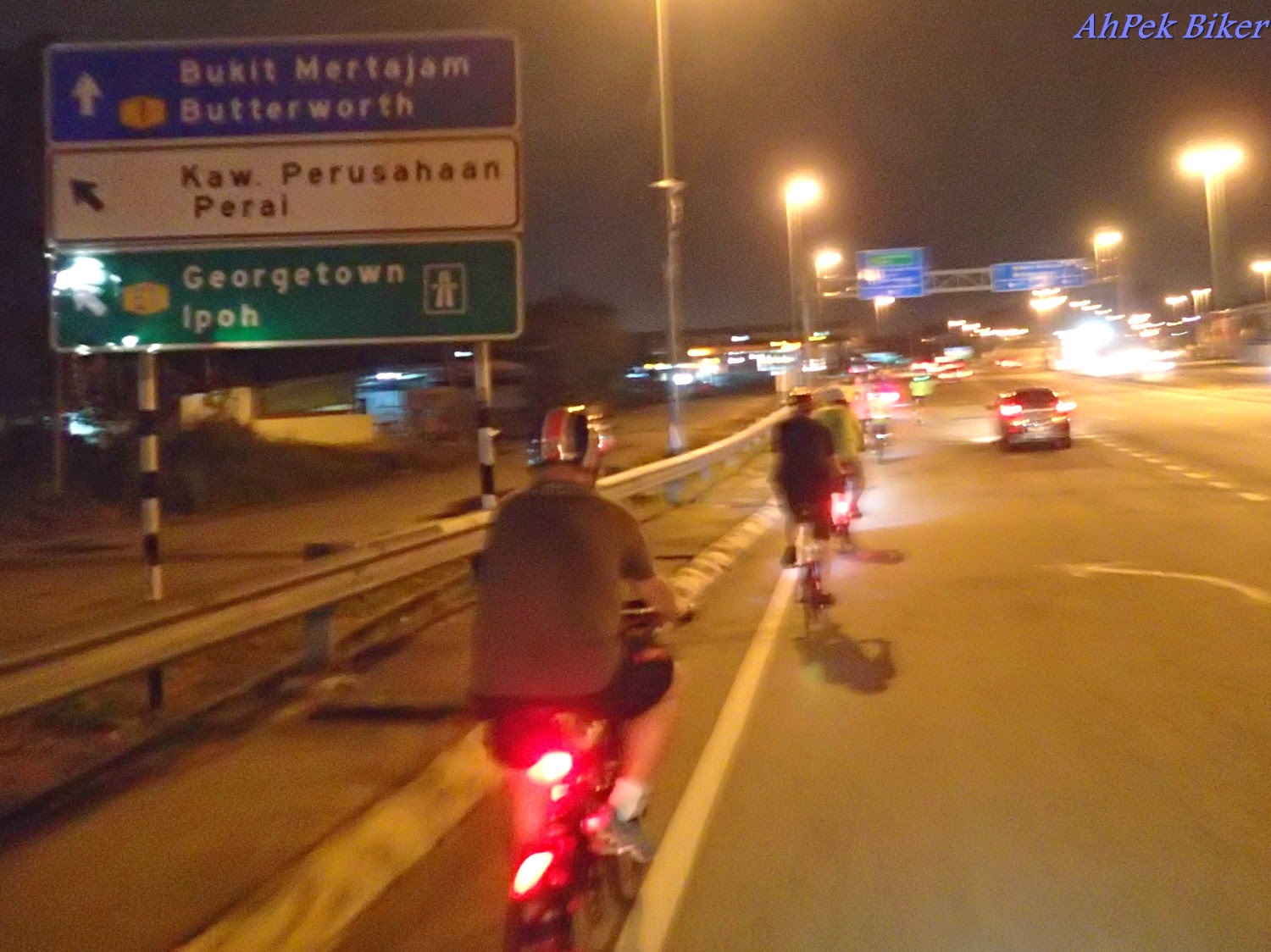 ... then ventured forth to the main trunk roads. Traffic in BM is heavy and sometimes slow, because of this drivers get very impatient so we had to ride with extra care. 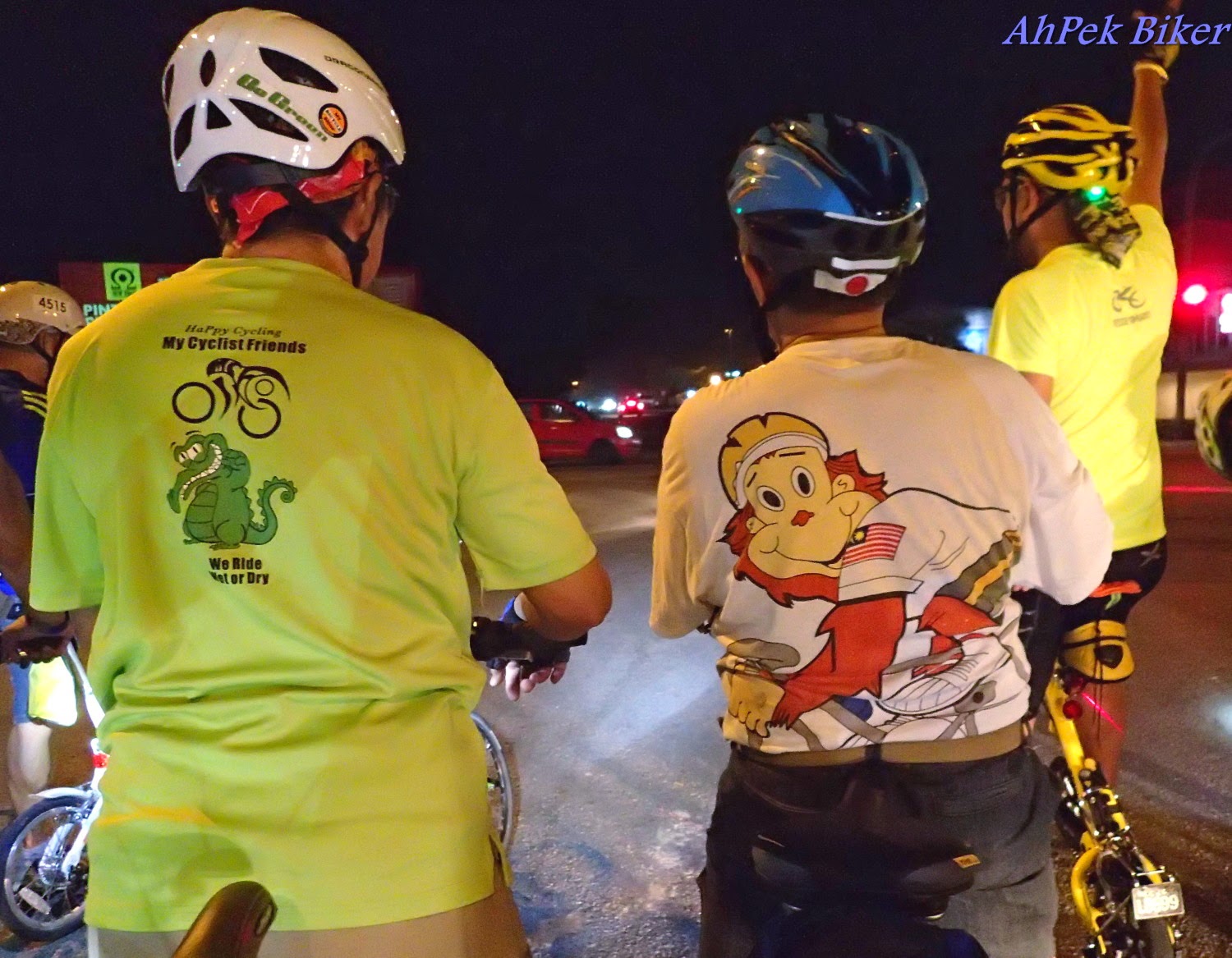 Cute T-shirts; one of a sniggling crocodile and another of an smiling orangutan. 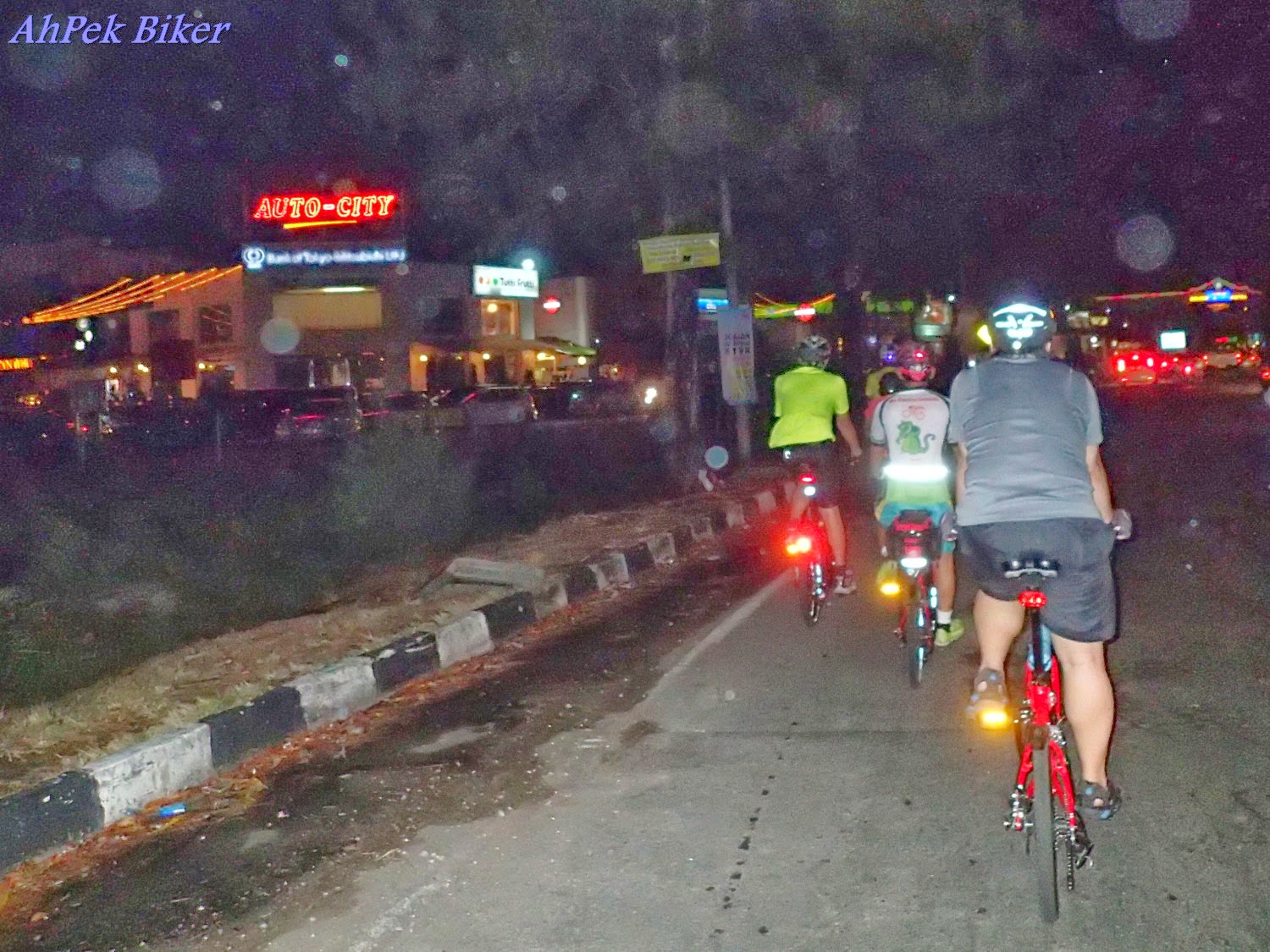 All too soon, we were at Auto-City, and fortunately too as it had started to drizzle. 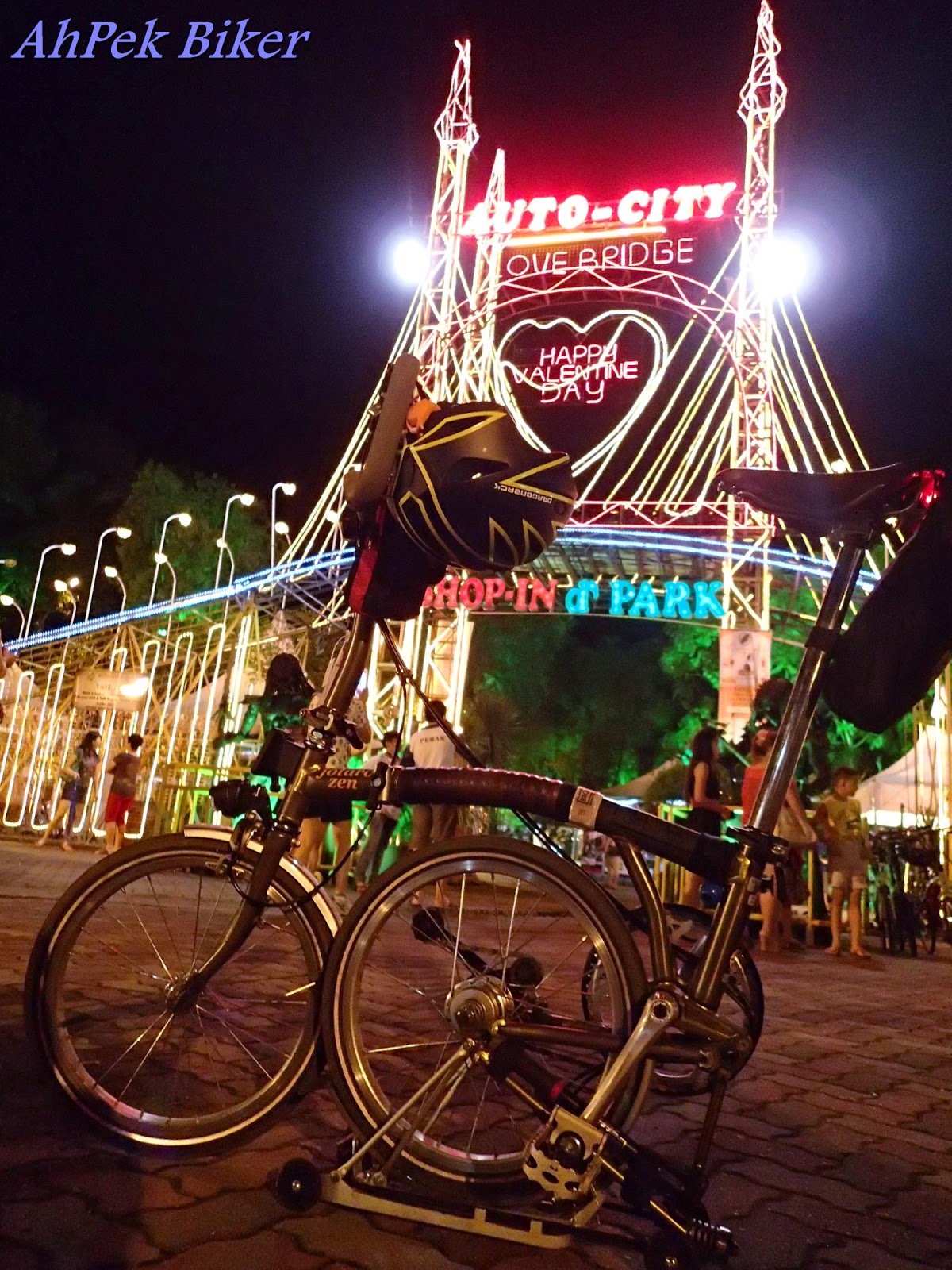 Auto-City is like a permanent mini trade fare. Inside there are stalls selling all sorts of things and outside there are large individual specialty shops. It's the happening place on the mainland of Penang. While most of us waited outside, s few of us went in to do some light shopping... 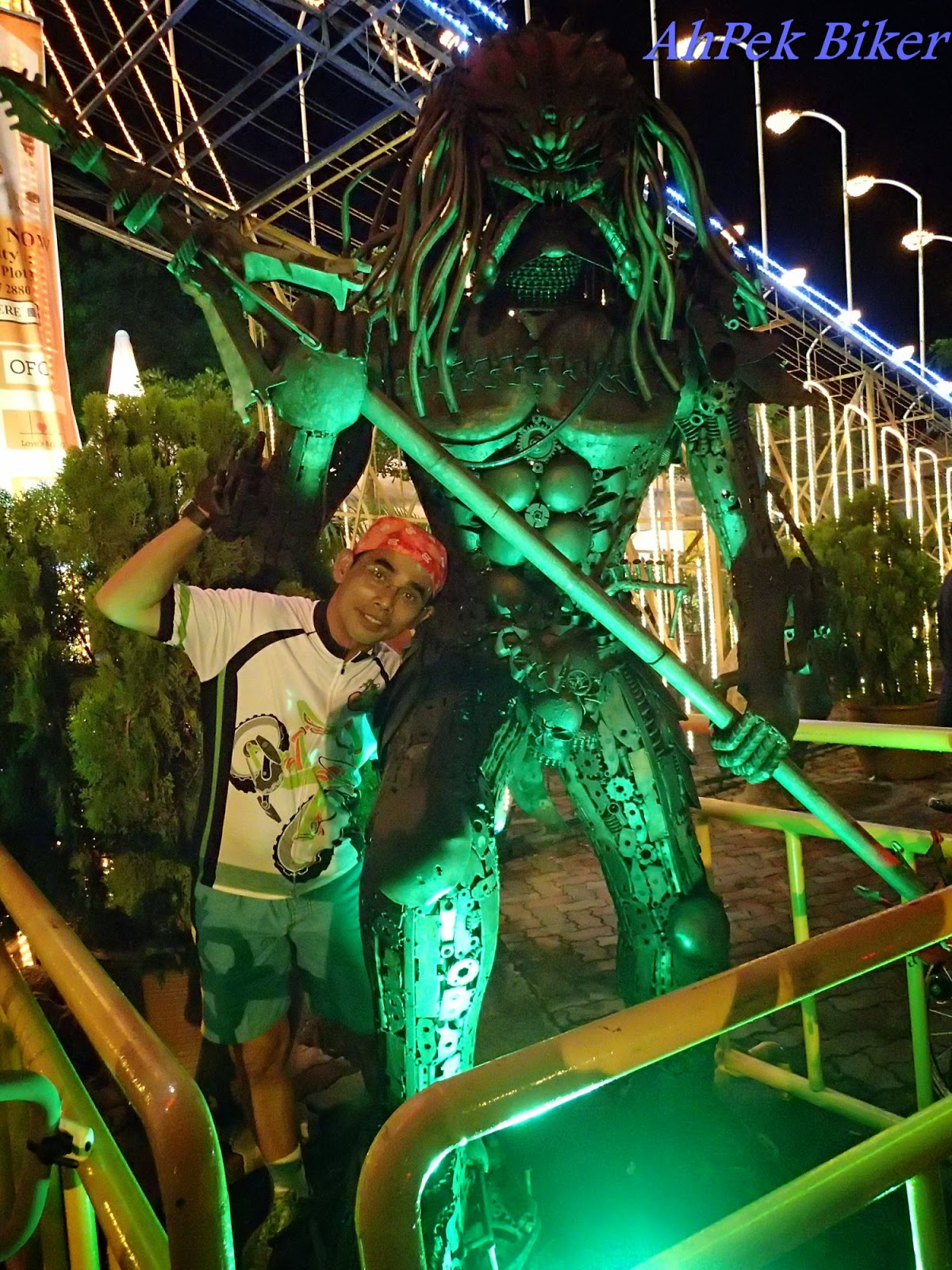 ... and some had fun with the Predator statues at the entrance. 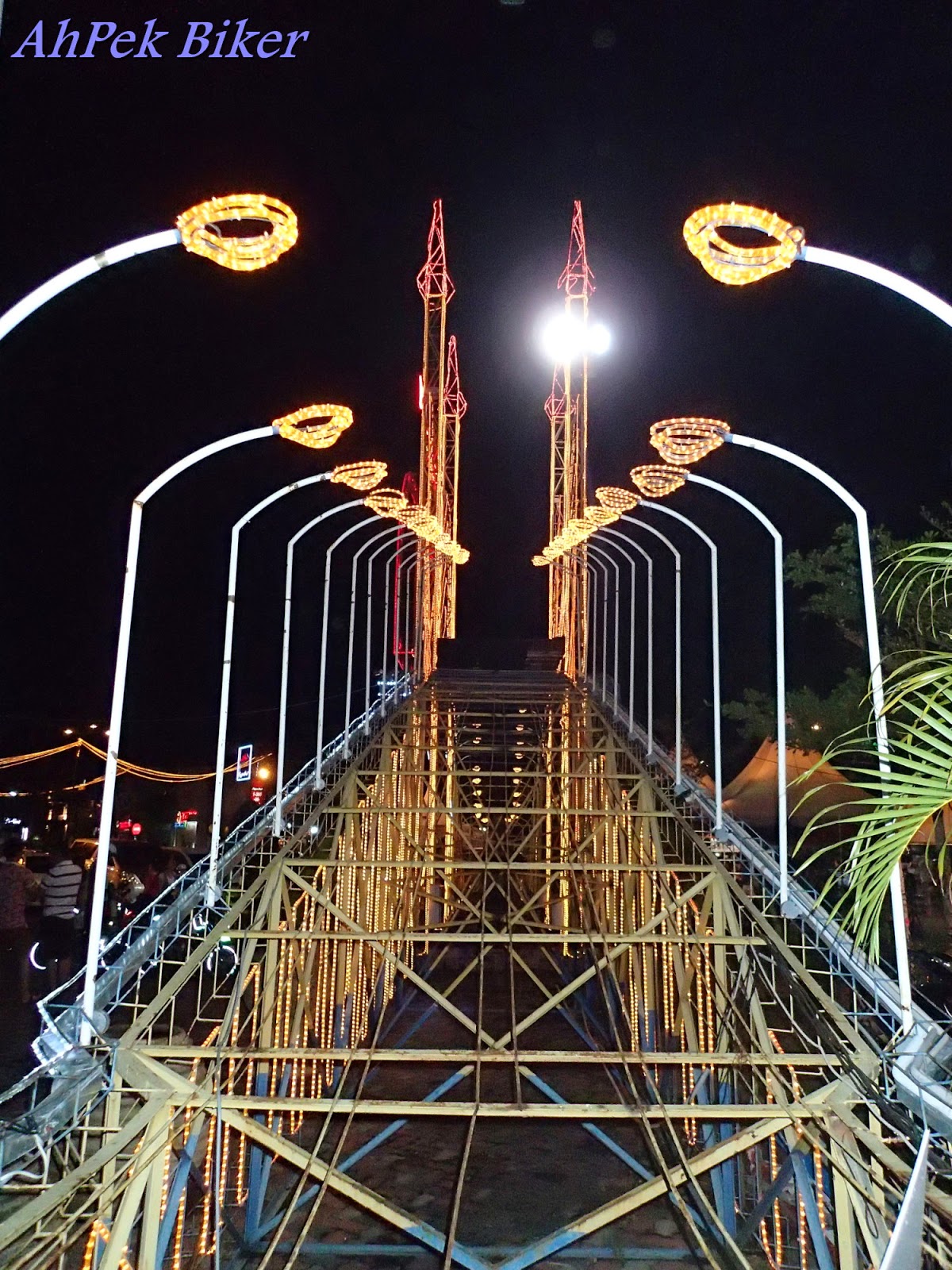 Then entrance arch into the is uniquely designed to look like the Penang Bridge; this is more apparent if one stands at the side and look upwards. 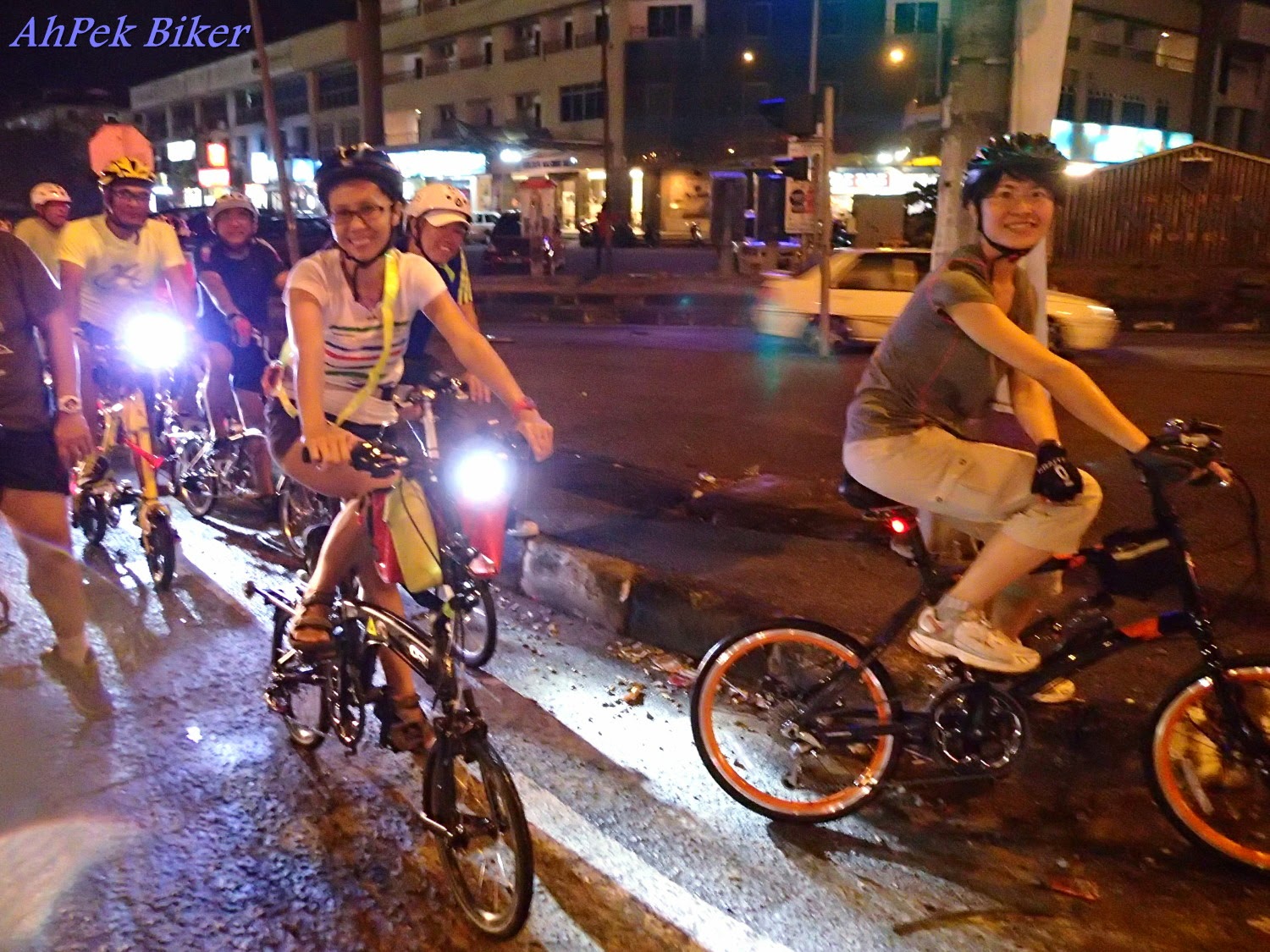 The route back was the same one that we took on the way here. 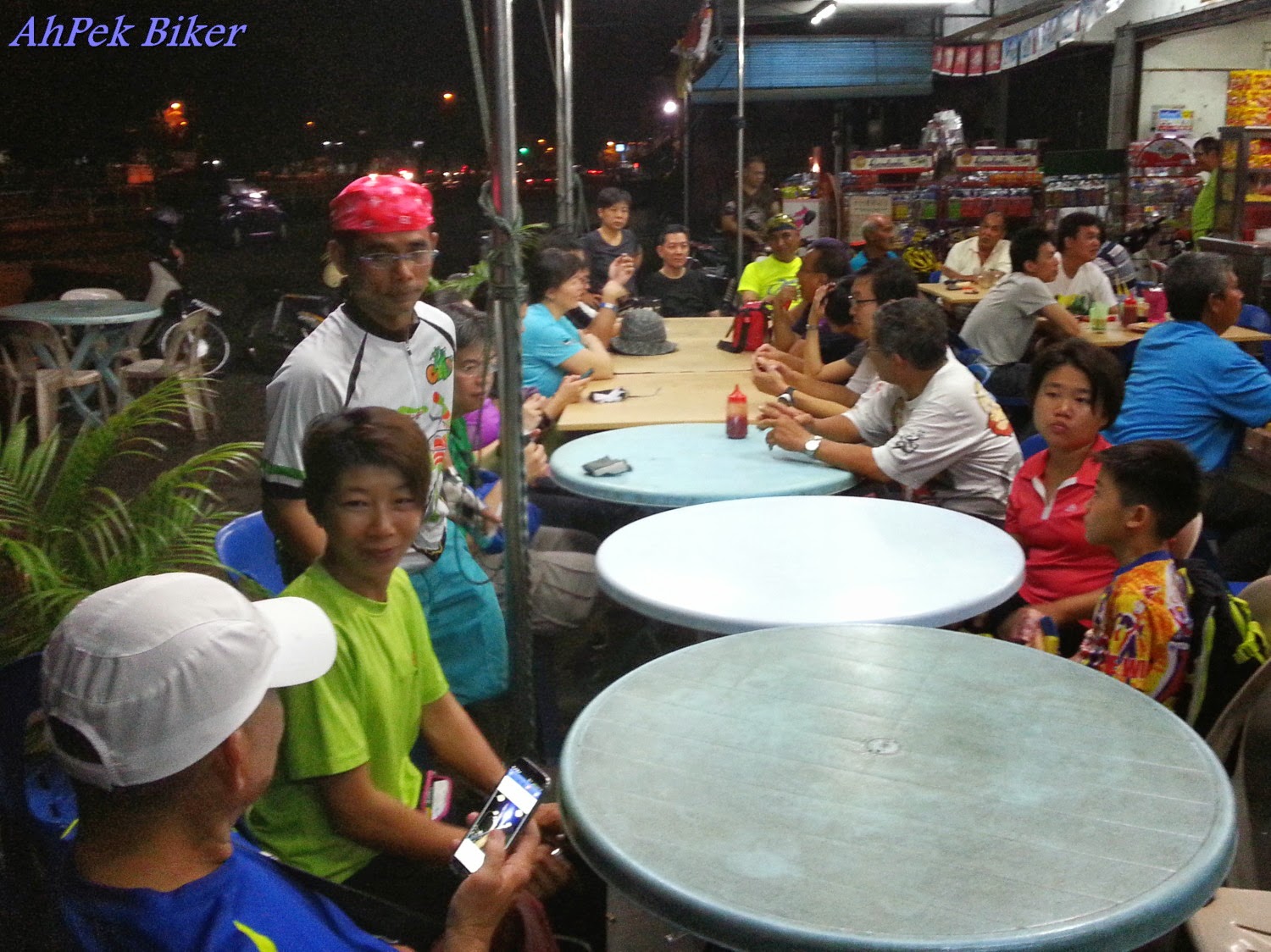 Of course like most of rides, it ended with an eats session!

You are at - Jotaro's Blog / AhPek Biker / Cycling Malaysia / Penang / Big Foot Mountain Ride
If you like this, view my other blogs at Jotaro's Blog
(comments most welcomed below. if you like this pls share via facebook or twitter)
Posted by Jotaro Zen at 5:46 AM