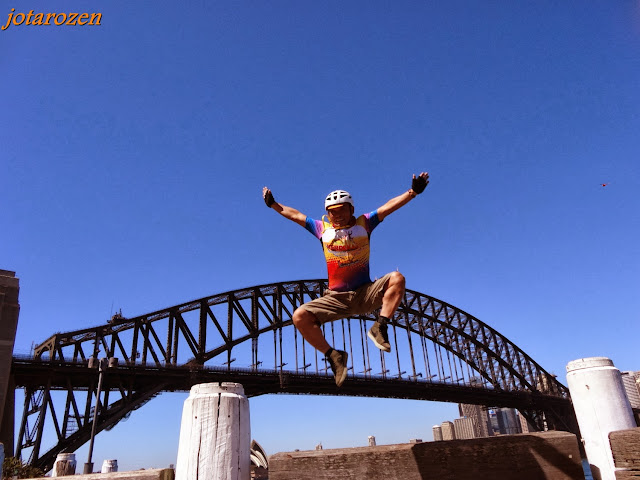 Route Recommendations :
1. Sydney is very cycle-friendly. Most kerbs are ramped and signage for biking very adequate. Along most main roads, are round & oblong brackets for locking bicycles.
2. Bicycles are allowed onto trains and ferries without folding. There are even racks for locking bicycles on the ferries.
3. There is a dedicated lane for cycling on the Harbour Bridge. But do take note that this is on one edge of the bridge, on the other edge is a lane for pedestrians; so do take the right lane.
4. There are many vantage points to view the Harbour Bridge and the Opera House.
5. Cycling is allowed into the grounds of the Opera House, so don't miss this as up close the Opera House looks even greater.
6. At the seaside edge of the Royal Botanic Gardens, the cross winds can get rather strong. 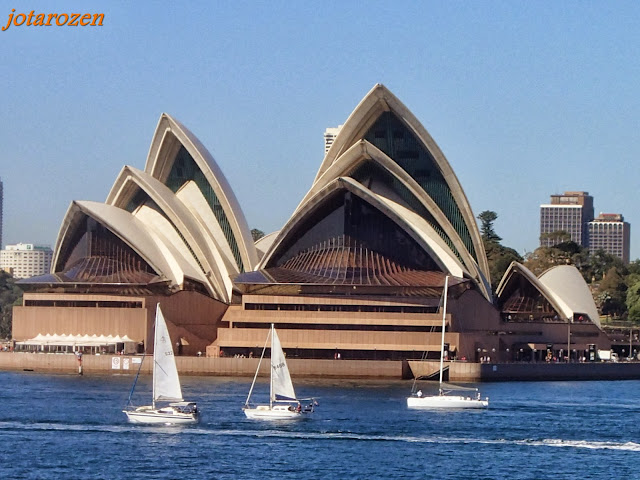 I was on a short 5-day holiday to Sydney (see Sydney 2013 blogs) and managed to squeeze in a morning to go cycling. Sydney is a wonderful place to cycle in, with many interesting places to visit and a few iconic sites to be awed by. Besides this, the city is very cycle-friendly with ramped kerbs, adequate signage, bicycle racks, etc. They encourage cycling here, but do note that certain rules have to be abide by.


I have a passion for cycling (see AhPek Biker's blogs); and of late, I have made it a point to cycle in any country that I visit. Taking a slow ride around Sydney by myself would have been lovely, but realistically I was on a short 5-day holiday with my wife. Taking some time off for cycling was already a luxury. So while Lynne was off shopping, I was a "bachelor" for half the day and joined Bike Buffs for their cyclo-tour of the city.
Graeme, the ride leader, was surprisingly sprightly for a man his age. And here I was thinking that I am old; he is proof that cycling does give good exercise and keeps one physically fit.


My new biking  friends and companions for half the day were Simon and Carolyn from another part of Australia; Bindy and Toby from southern most tip of South Island, New Zealand. 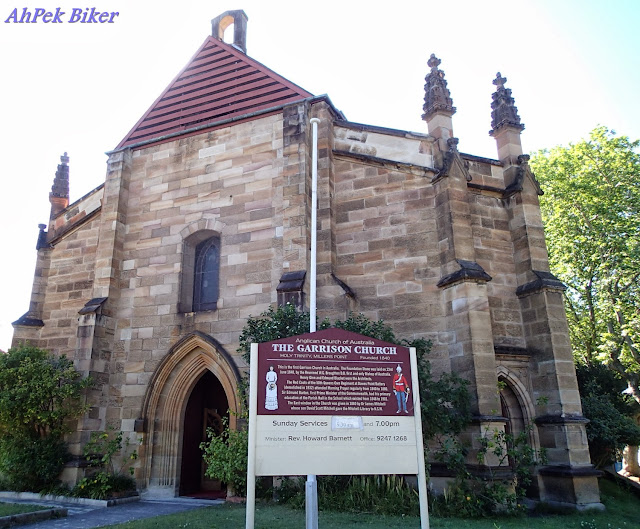 The meeting point was at the front of the Old Garrison Church at Lower Fort Street, it's a small Anglican church but its old sandstone look made it stand out. 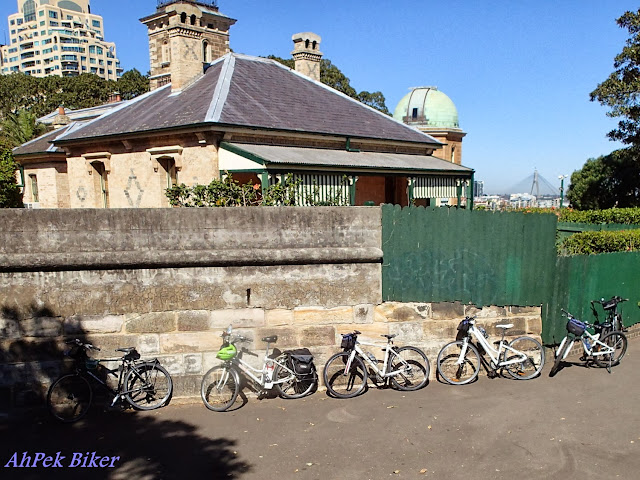 Just round the bend and within ten minutes of cycling was the Old Observatory. We made our first stop here.

Situated on one of the higher spots of Sydney, this place offers a very good panoramic view of the sea and the South Sydney's city skyline on the opposite side. 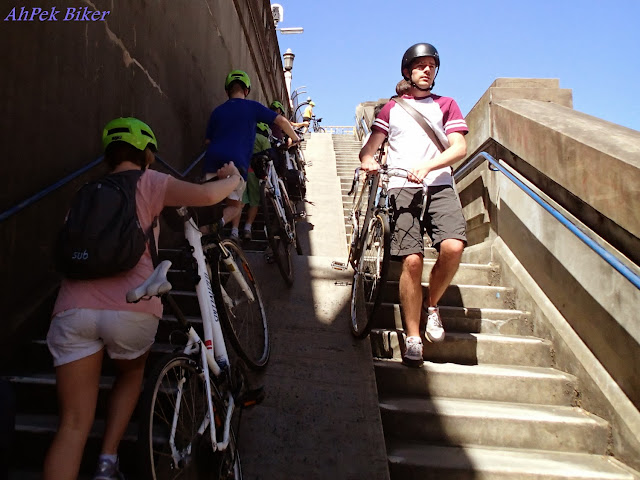 It was a short ride from there to the Harbour Bridge. To get to the deck level of the bridge, we had to climb up some stairs. With my poor back, I was a bit concerned about having to carry my bicycle up. Fortunately, Sydney is a very cycle-friendly city, at the centre of the stairs was a narrow ramp where we could push I bicycles up as we stepped up. 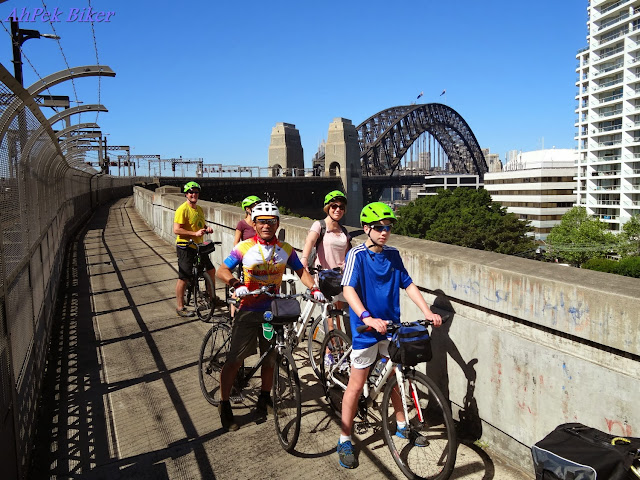 At the top of those stairs we made our first physical acquaintance with this landmark bridge and soon we were riding on the bridge itself, on the dedicated cycling lane, through the iconic mid-span and over to the other side of the Parramatta River. 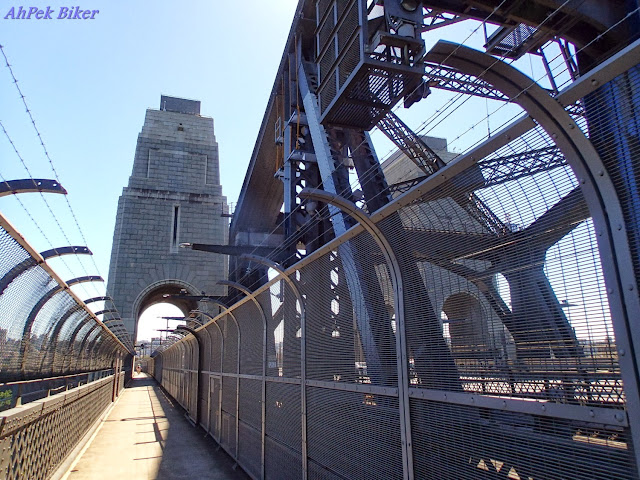 At the mid-span, the bridge looks like any other steel bridge from the early 20th Century. From close up it is no beauty, just connections of large black steel piers and beams. The Sydneysiders "lovingly" call it the Coat-hanger, it does look like one! 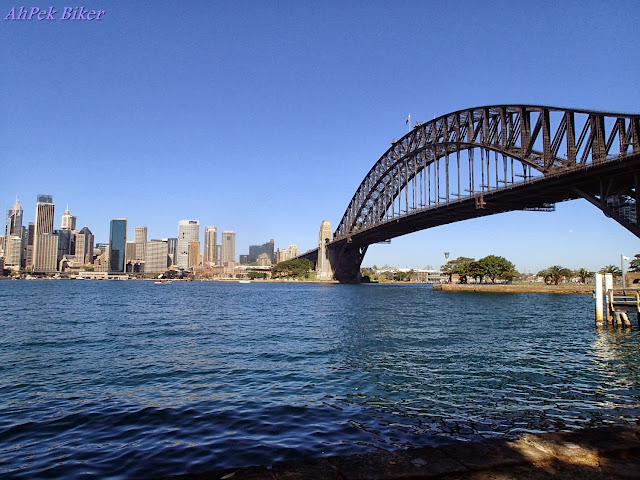 I wonder then, what makes the Sydney Harbour Bridge stands out from so many around the world? Perhaps it's very outstanding position on a wide blue river amidst beautiful surrounding that makes it easily recognizable. From most part of down-town Sydney, the bridge is very visible. 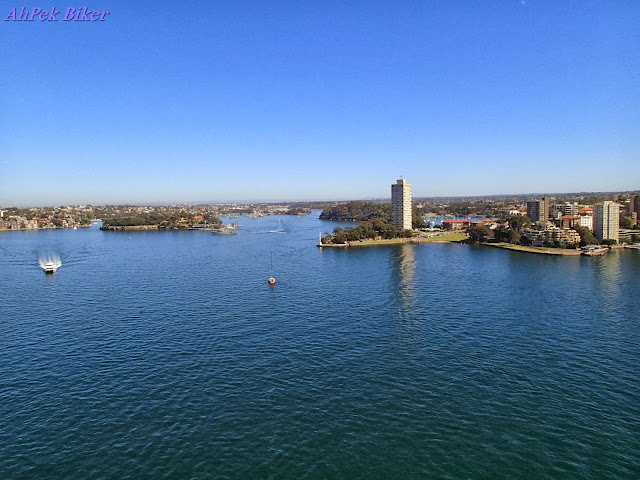 The superb location of the bridge gives us an all round bird's eye view of the the city, from the towering skyline of it's business district, to Opera House and to the quieter residential area. All is a nice balance of green and blue. 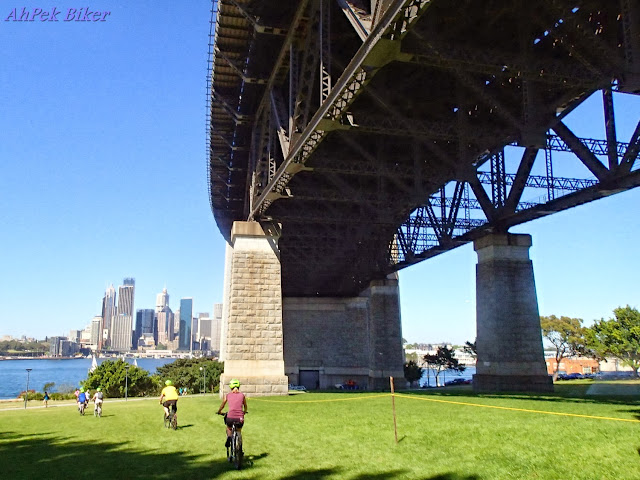 Over on the other side, it was cycling under the bridge now, on the grassy lawn of the Olympic Park to head for the riverside.

And a good panoramic view of the Opera House. 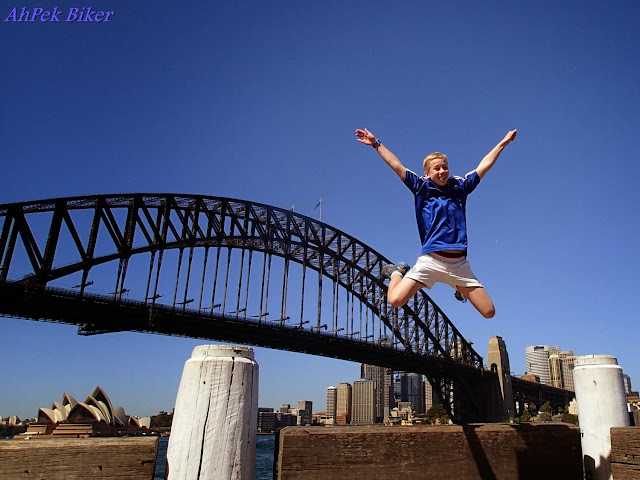 Over at Milson's point next to the Luna Park, we took turns to do the butterfly jump. Toby did a great one, with his arms well apart and legs too. It looked like he had just jumped off from the bridge.
When it came to my turn, I looked more like a clumsy frog than a dainty butterfly (see topmost photo); but still it's a photo that I will treasure dearly. 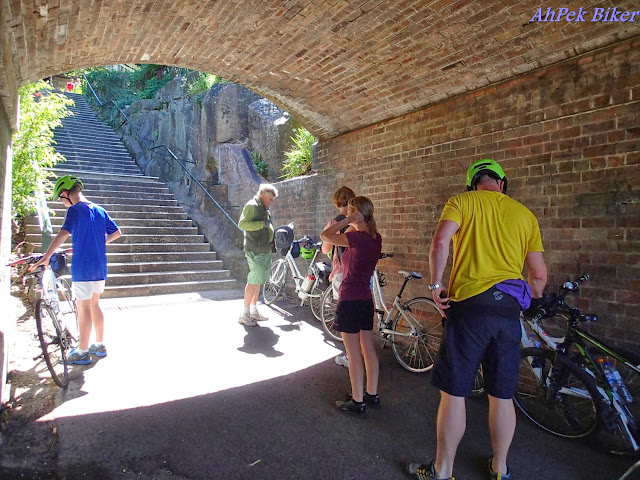 Graeme knew his route well, taking us through small coves and through a hidden tunnel that led to steps that went upwards to... 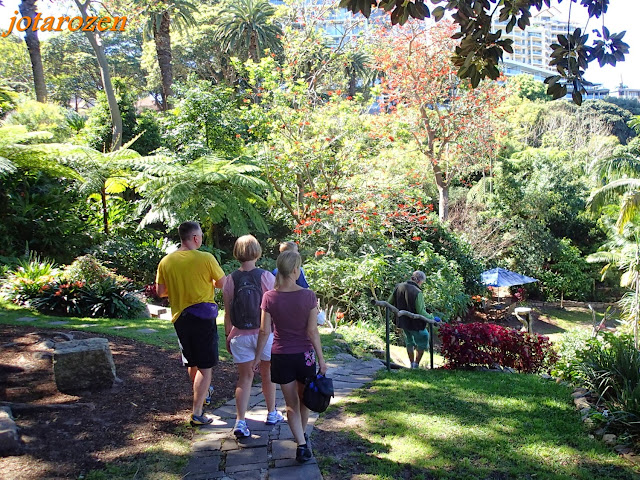 ... a secret garden! This is Wendy's Secret Garden, a fairly large garden on gentle undulating slopes planted with semi-tropical trees, bushes, ferns, etc. It's secret because many locals don't even know about it! 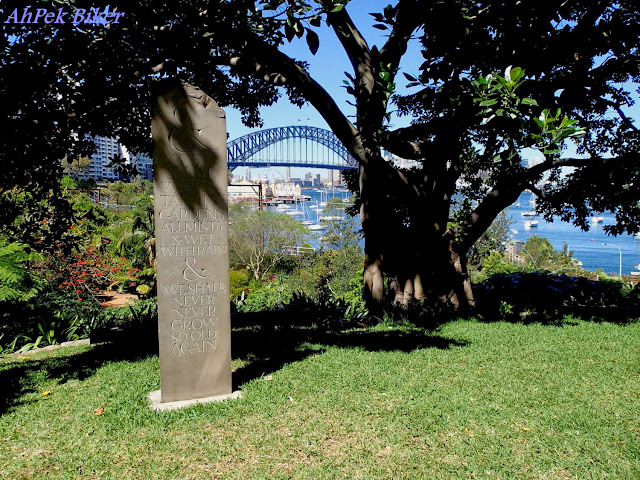 If I found this place amazing, the locals here must find it enchanting. Imagine, just a few hundred meters from the Harbour Bridge is this large garden so well planted that it resembled a forest. It's much more than a park, with many of the trees growing in a seemingly uncoordinated natural beauty. 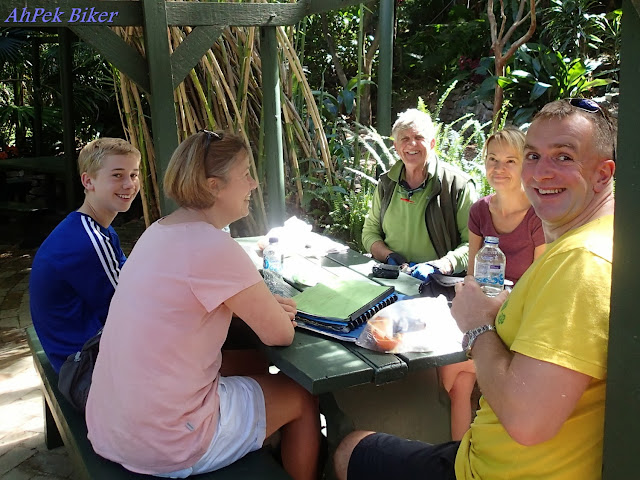 In this peaceful garden, under the shady trees, we had a simple picnic, chatting and getting to know each other better. 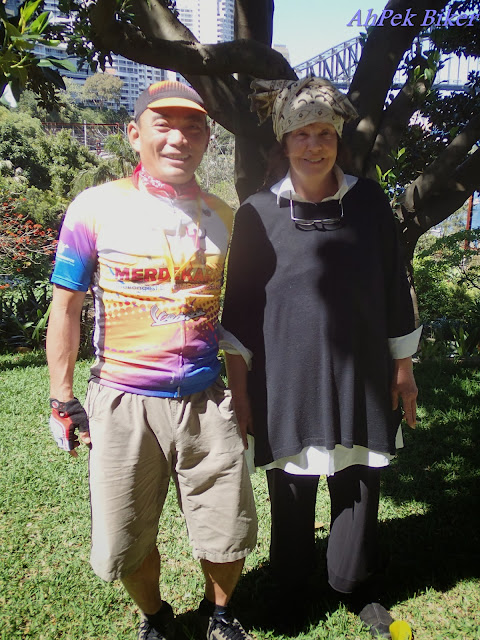 Wendy is quite sporting, even though she was in the midst of tending to her garden, she took some time to pose for a photo together with me. I must take my hat off to her, at her own expense and time, she has taken a former piece of derelict land adjacent to her own house and has transformed it into a very fine garden! 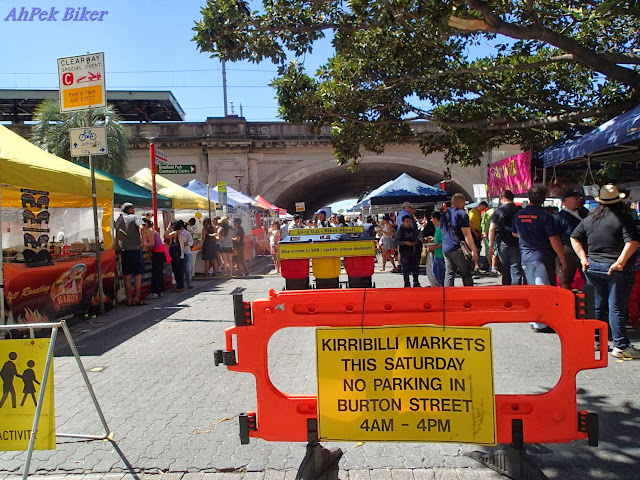 From that quiet, serene garden, we cycled around the suburbs for a while and then popped over to the Kirribilli flea market. It's a hopscotch of stalls selling food from all over the world - Russian Blynis, Dutch Poffertjes, French Macarons, etc. 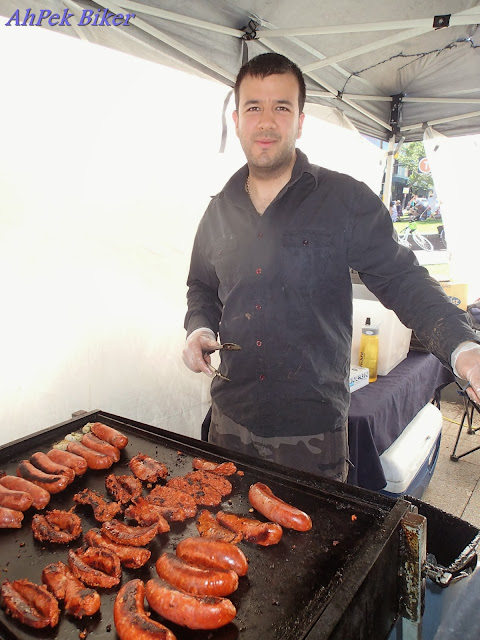 I had the Turkish Gozleme as my brunch, it's a very thick sausage in a long bun and garnished in spicy sauce. 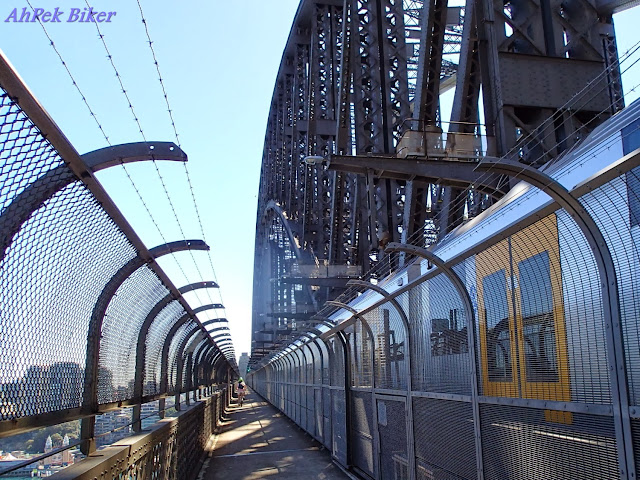 We are riding back on the Harbour Bridge again, crossing back to North Sydney. This time a train came whooshing by. The bridge has several lanes, with some for motorized vehicles, one for the train, and on one edge a lane dedicated for cyclists. On the other edge is a lane dedicated for pedestrians. It is a fine example of sharing the roads without clashing of traffic! 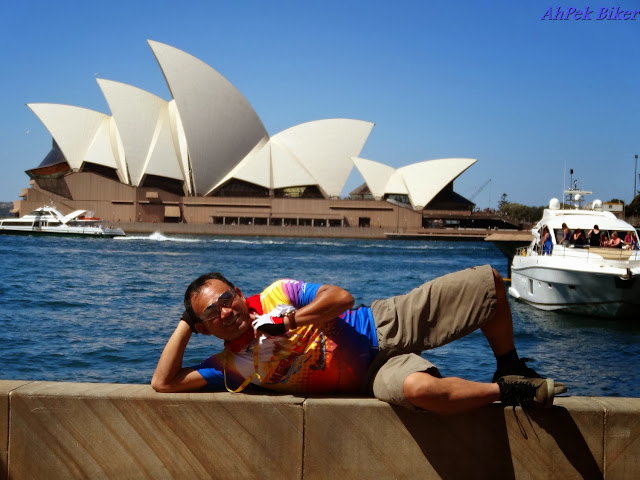 The profile view of the Opera House from Dawes Point is one of the best. Here we took turns to pose sexily with the Opera House in the background. Are my curves better than that of the curved roofs? There's no argument there, definitely mine! - *smirk embarrassingly* 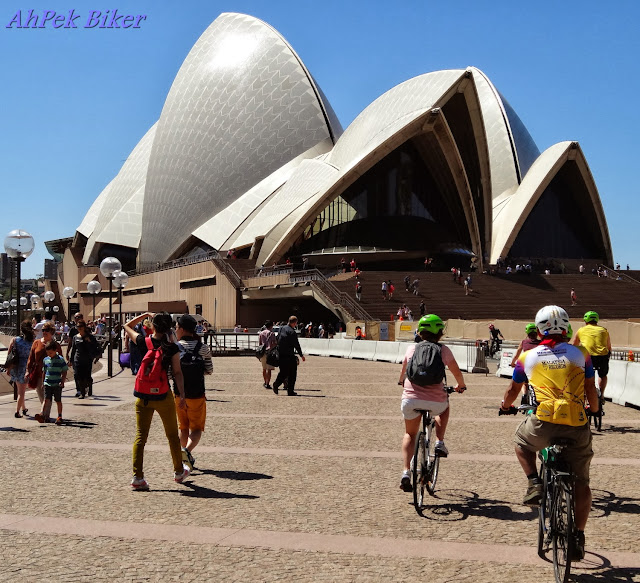 We rode right into the grounds of the Opera House. Great! Cycling is allowed here, there is no need for peeping over the shoulders guiltily to look out for those rangers. 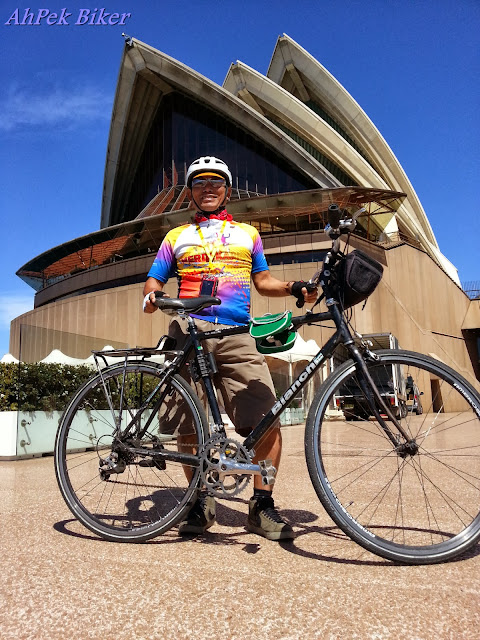 Up close the building looks even more majestic, like an eagle on its aquiline perch. Even today after decades, it is still one of the most modern looking structure in the world. 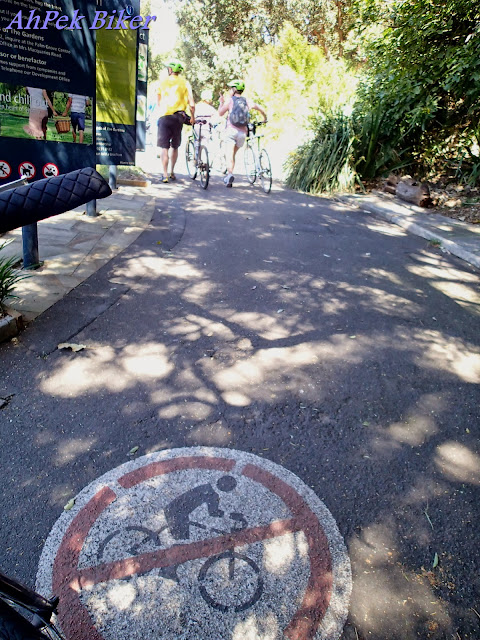 The Royal Botanic Gardens is just right at the doorsteps of the Opera House. No cycling is allowed here, and we alighted to push our bikes. 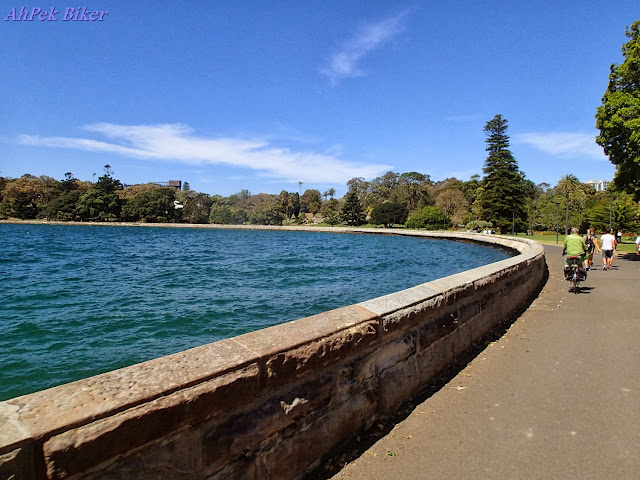 The nice, strong cooling wind blowing in from the turquoise sea was made it too tempting, we just had to cycle there.
But as we rode, our eyes were on the look out for park rangers, there is a hefty fine of AUD200 for this offence. Nevertheless the breezy ride was enjoyable and we were ready to jump off our bicycles at any instance of spotting a ranger! 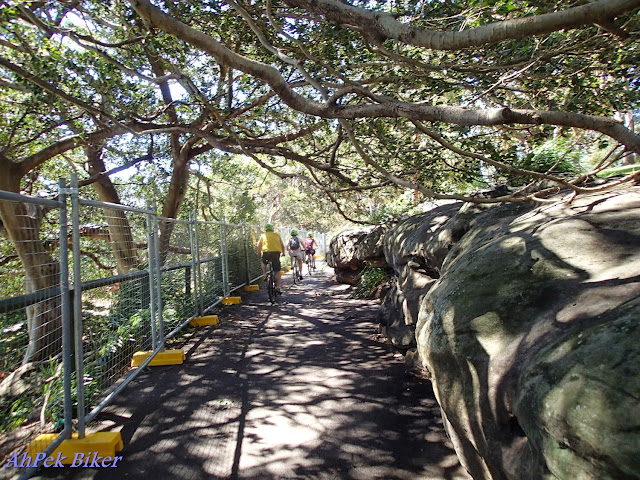 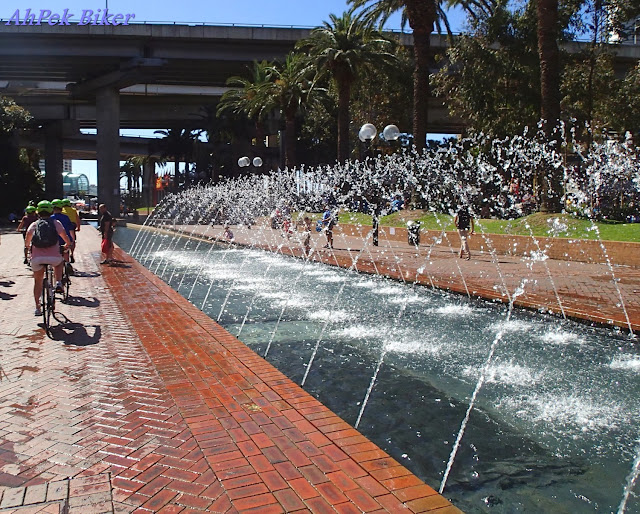 Zig-zagging across down-town Sydney, we reached the Darling Harbour. 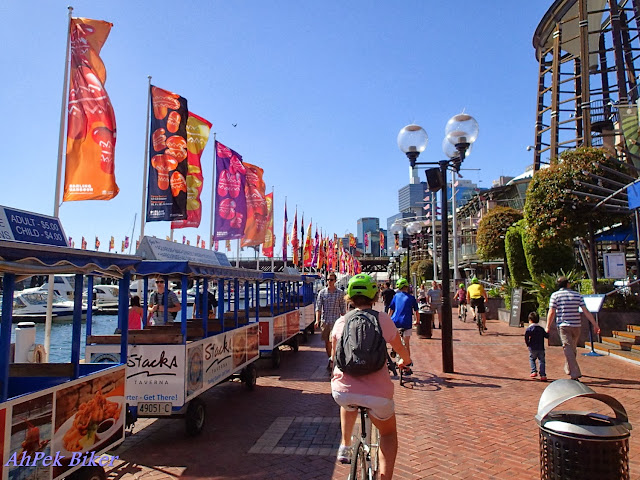 The colourful fluttering flags here greeting us and cheering us on. 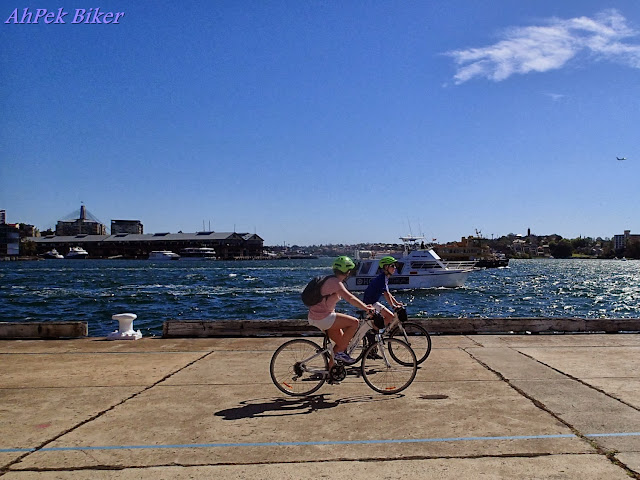 We are heading back to the end point but through an interesting short cut - right through the docks of the naval yard. On this side no warships were moored, so we are safe. 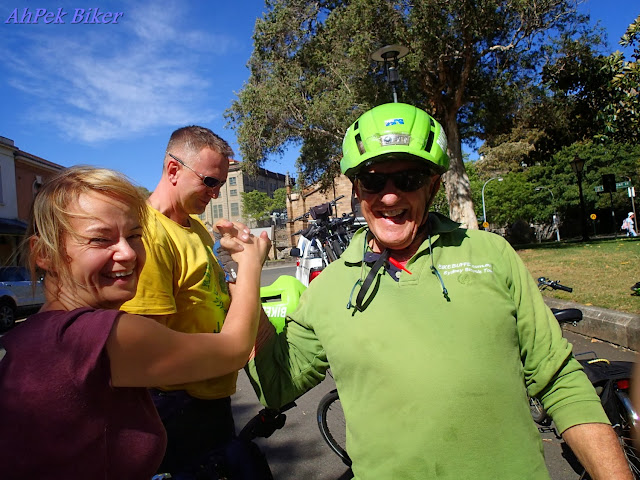 Cycling around Sydney is a great way to see the city; within one morning we had seen most of the major iconic sites, a good sampling of the places for Lynne and me to visit later on. 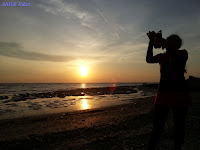 Scenic Sekinchan Day 1 (Pt.2), 20th April 2013
Part 2 of Day 1; From Kuala Selangor to Sekinchan,
a hot but wet ride made worthwhile by the scenic beach of Sekinchan.