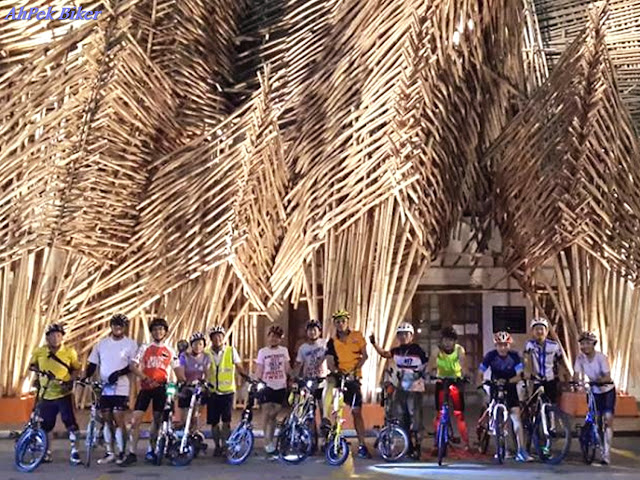 Route Recommendations :
1. Do stop by the IJM Promenade to view the giant floating Hornbill Mascot.
2. Cycling along the bicycling lanes would have been nice once they are completed.
3. If planning to eat at Cheapside, ride in from the back so as to avoid the crowded front. 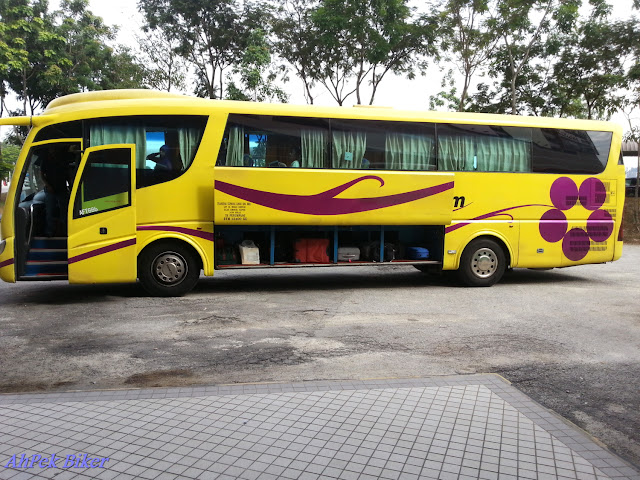 I am on my regular trip up to Penang again. This time round I took the Alisan coach from the 1-Utama Transportation Hub to Penang's Komtar. My favorite bus company the 5-Star coach had discontinued their service for this route.
The Alisan's coaches are not too bad, with individual TV in-bus entertainment (several channels but no video-on-demand) and their fares are cheaper too. 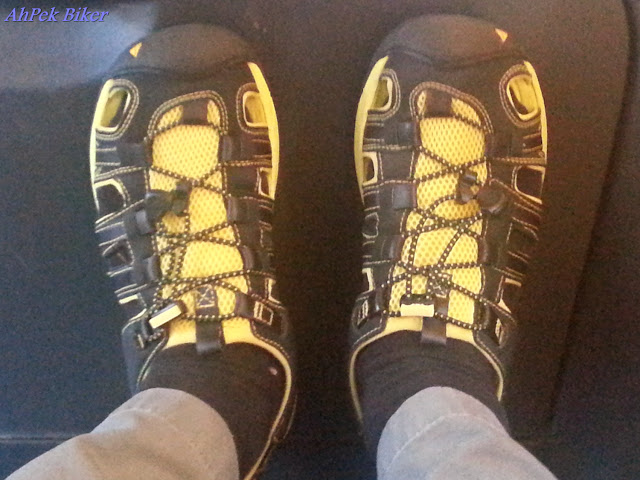 I will also be trying out my new yellow Keen adventure sandals. Hopefully, in this debut ride, they will perform as well as expected. 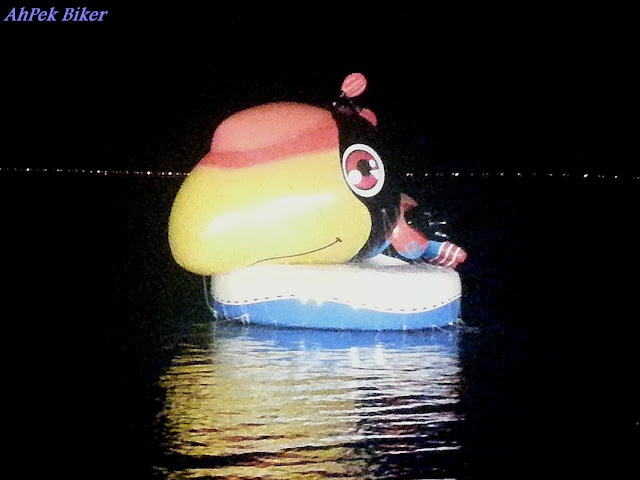 And along the ride we will get to see the large Hornbill mascot, a 20-30 feet blow-up floating in the sea off the IJM Promenade.
With so many yellows, this will definitely be a royally lucky ride. 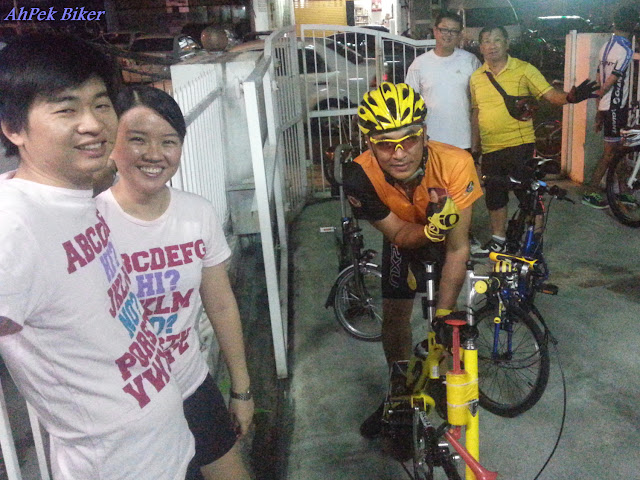 I have earlier contacted an old friend Larry and he had asked me to join his friends and him for this night ride. Yes, this will be a ride with some new friends.
That's Larry in the centre wearing an orange jersey. Here I also met a few new friends but more interestingly I met up with Winson Gan, he had contacted me through my blogs and was keen to ride with me. So I clued him in on this ride and here he is, in a yellow t-shirt - another yellow, another lucky stroke! Next to him is Lemon, contrary to his name he is not a sour fellow but a real cheerful person. 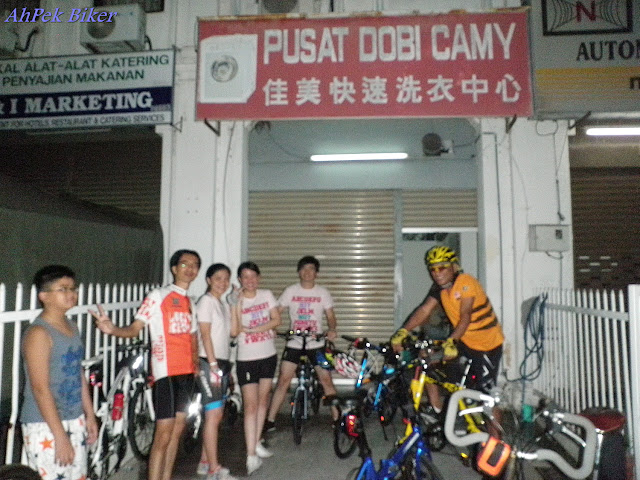 We met at Mako's place (that's on the left in a orange jersey, he operates this laundry shop he owns). Here too, I got to know Agnes (third from left) and Jimmy & his wife Aliya (they are not in this photo but are a wonderfully helpful couple as I later found out at another ride). 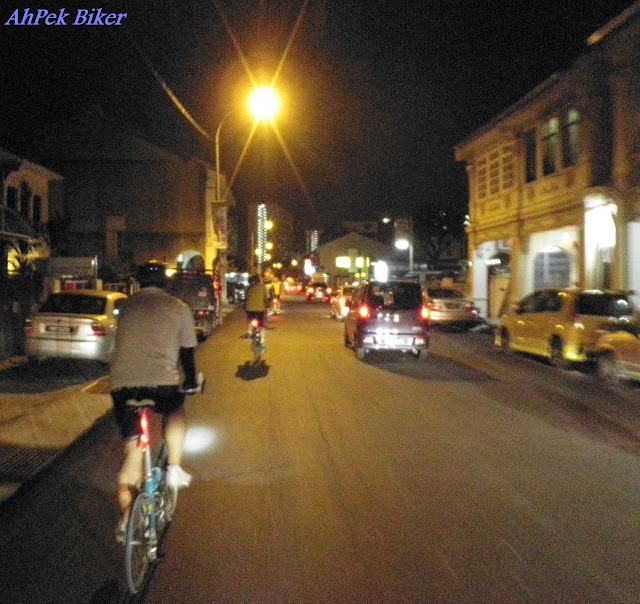 At 9:20pm, we rode off, and riding through the quieter streets we headed for the IJM Promenade for an interesting sight.

What's the interesting sight - it's a large 20-30 feet blow-up Hornbill mascot floating in the sea off the promenade. 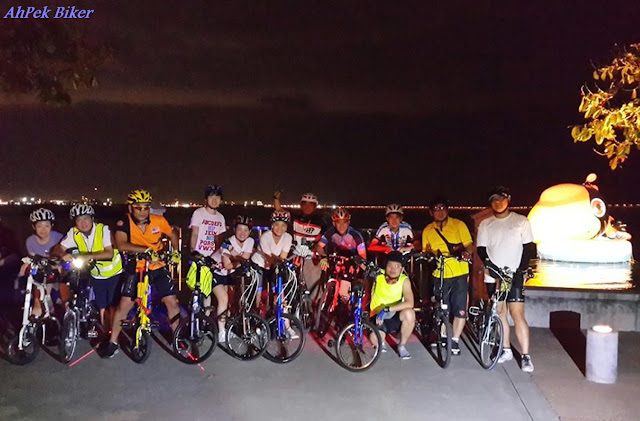 And here are my friends, new friends and me in a group photo with the floating mascot. 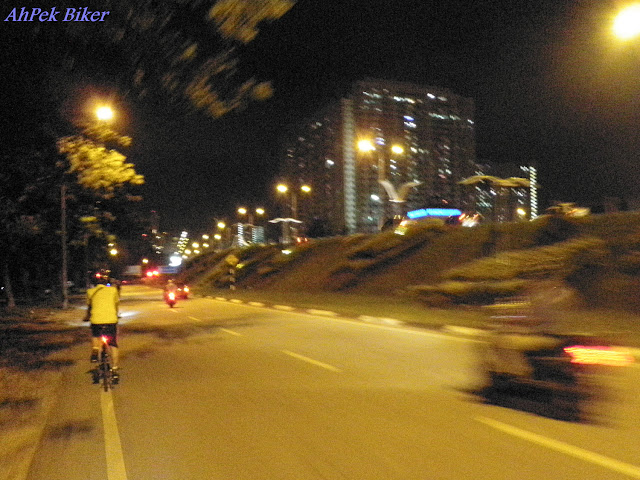 From there we took the busy Jelutong Expressway heading for our next destination, the Queensbay. 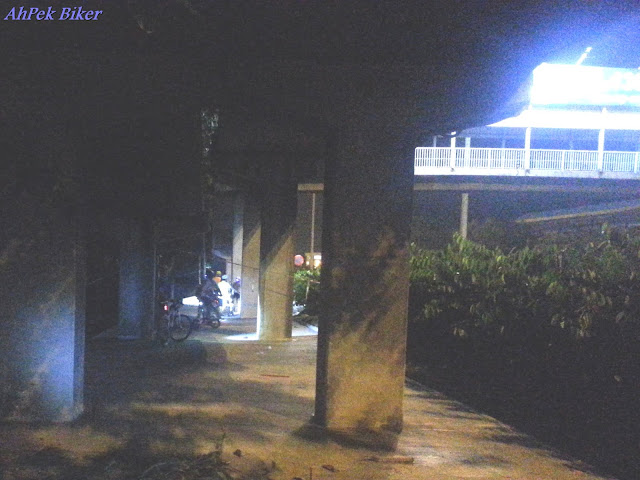 Somewhere near Udini Road, we decided to try out the cycling lanes that have been constructed. These lanes are made from concrete and are wide enough for two cyclists to ride abreast. 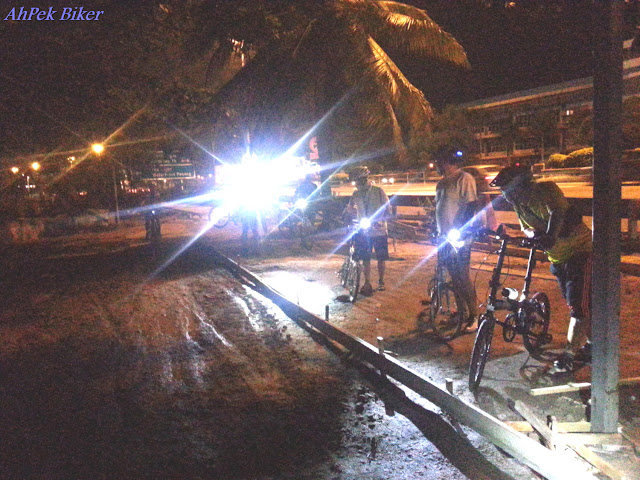 Oh-oh! Parts of the cycling lane is still under constructions. So, for fear of loose nails puncturing our tires, we abandoned our plans to ride to Queensbay. 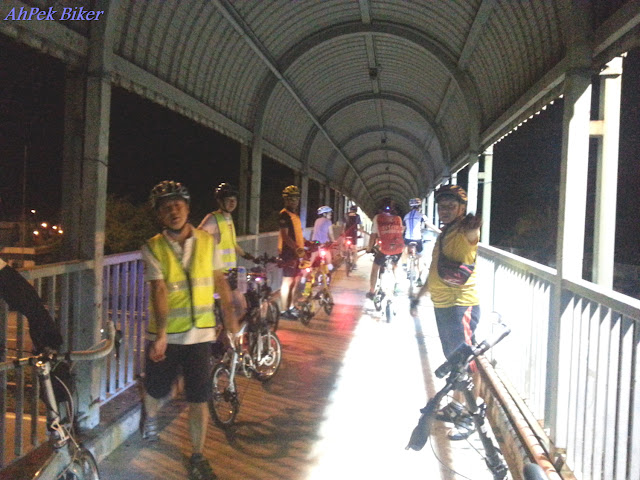 Instead, we took the next pedestrian bridge (near e-Gate) to head back to the city.

Did some barrier hopping too to get back onto the road. 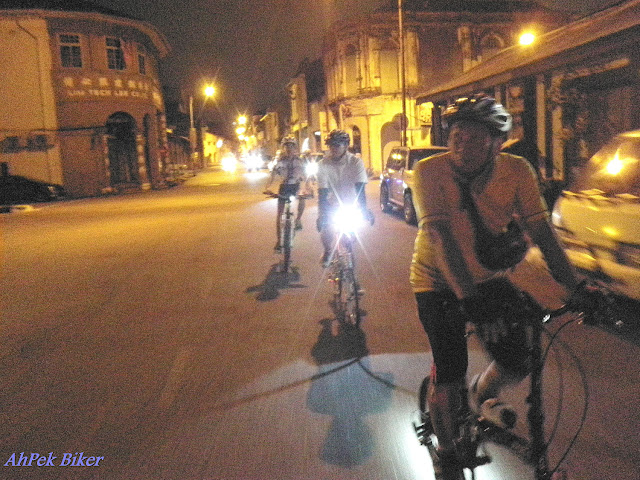 Via the Jelutong Expressway and making some turns here & there, we are soon riding on a quieter Beach Street. 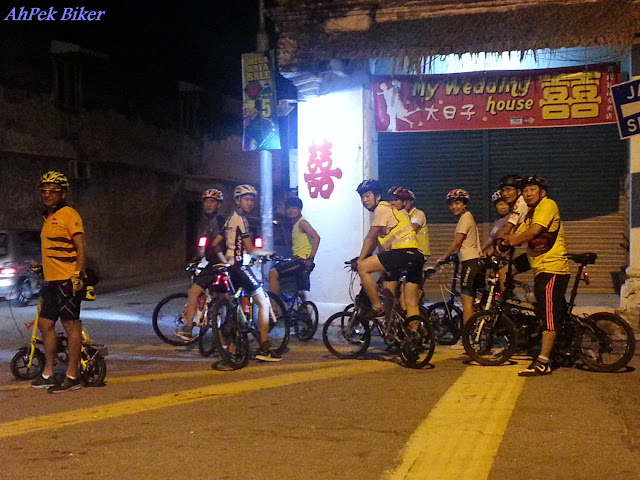 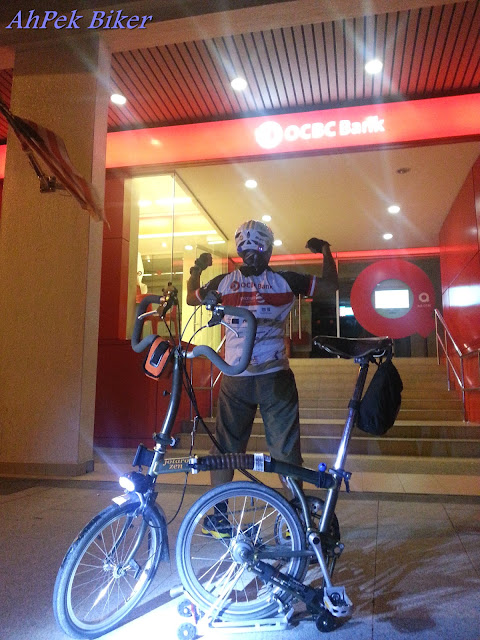 OCBC Cyclist at the OCBC Bank in Beach Street. 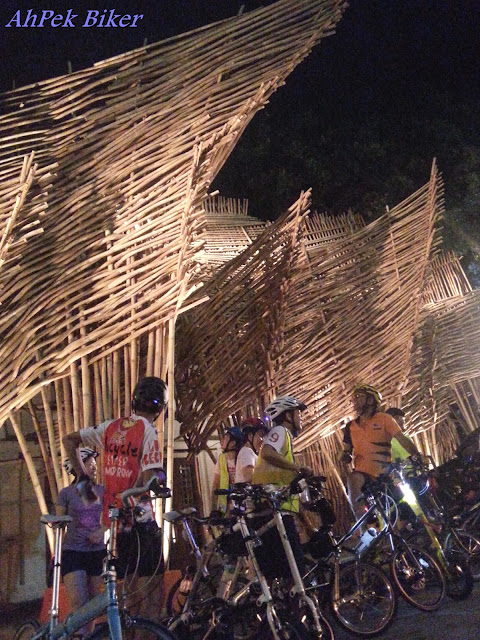 At the Esplanade, near the old Town Hall Building, we too a group photo at th"Ships" sculpture (that's the photo right at the top of this blog) and headed for .... 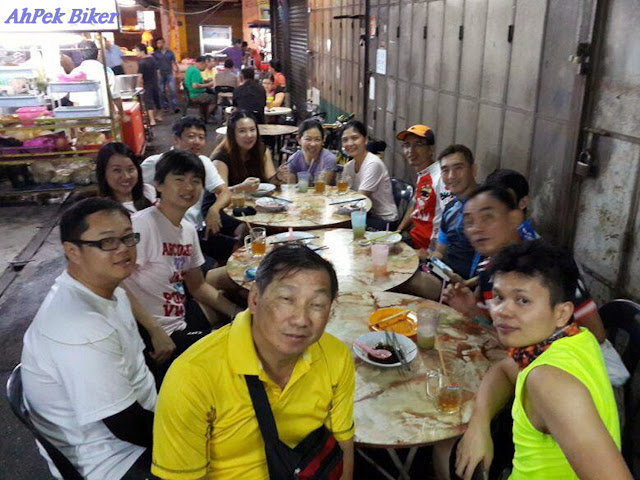 .... supper at Cheapside Alley off Chulia Street.
After which we rode back to the start point and called it a night.
It was a good ride, especially the part of meeting with new friends!

You are at - Jotaro's Blog / AhPek Biker / Cycling Malaysia / Penang / A Night Ride With New Friends
If you like this, view my other blogs at Jotaro's Blog
(comments most welcomed below. if you like this pls share via facebook or twitter)
Posted by Jotaro Zen at 9:21 AM