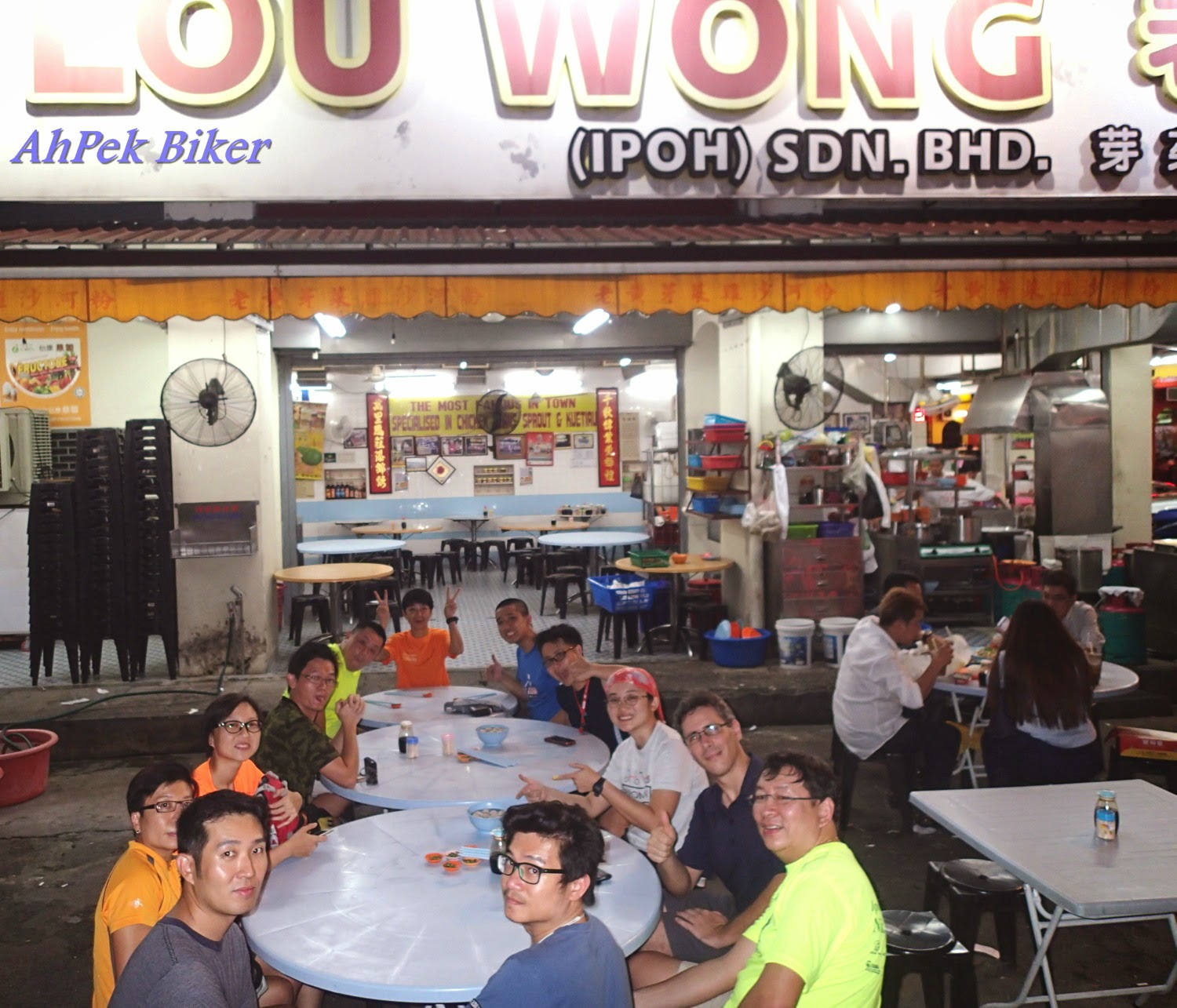 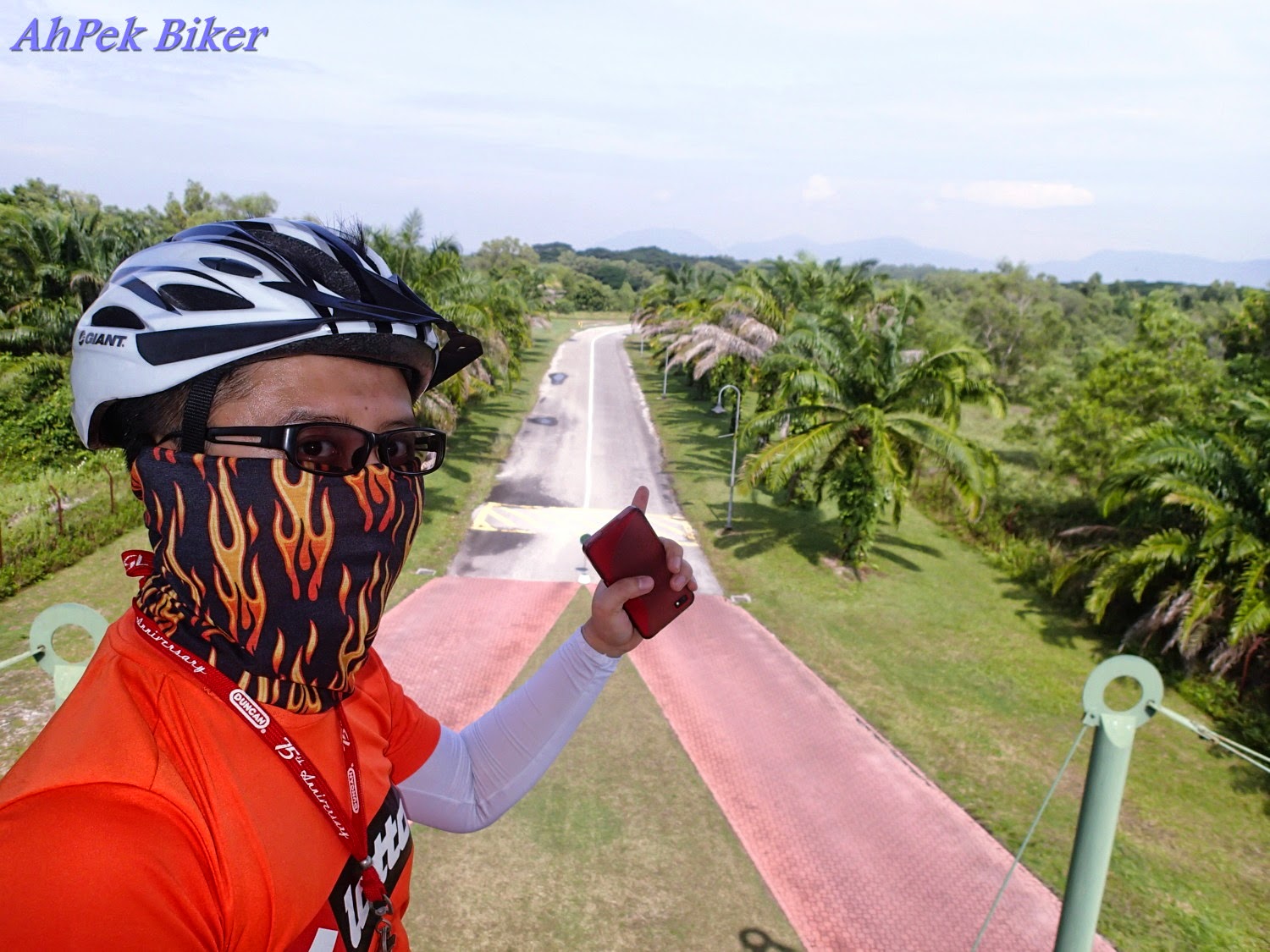 I have always admired our younger cyclist friends.
They are so exuberant about cycling; most of all I envy them for taking the effort to use there bicycles as much as often.
Kong is one of them, he cycles to work and has a FaceBook Group called the MY Brompton Commuter where cyclists chat on commuting, accessories, etc.
So when he invited us to a bike-packing trip from Ipoh to Teluk Intan and ending at Kampar, I was keen to join him and his younger friends; friends who commute daily with their trusty bikes. But I do hoped that this AhPek Biker's slower pace of cycling will not slow them down - there were no worries here as most of them rode at a casual speed to enjoy the ride and the places we passed through.
So here we GO!
___________________________________________________________________________________ 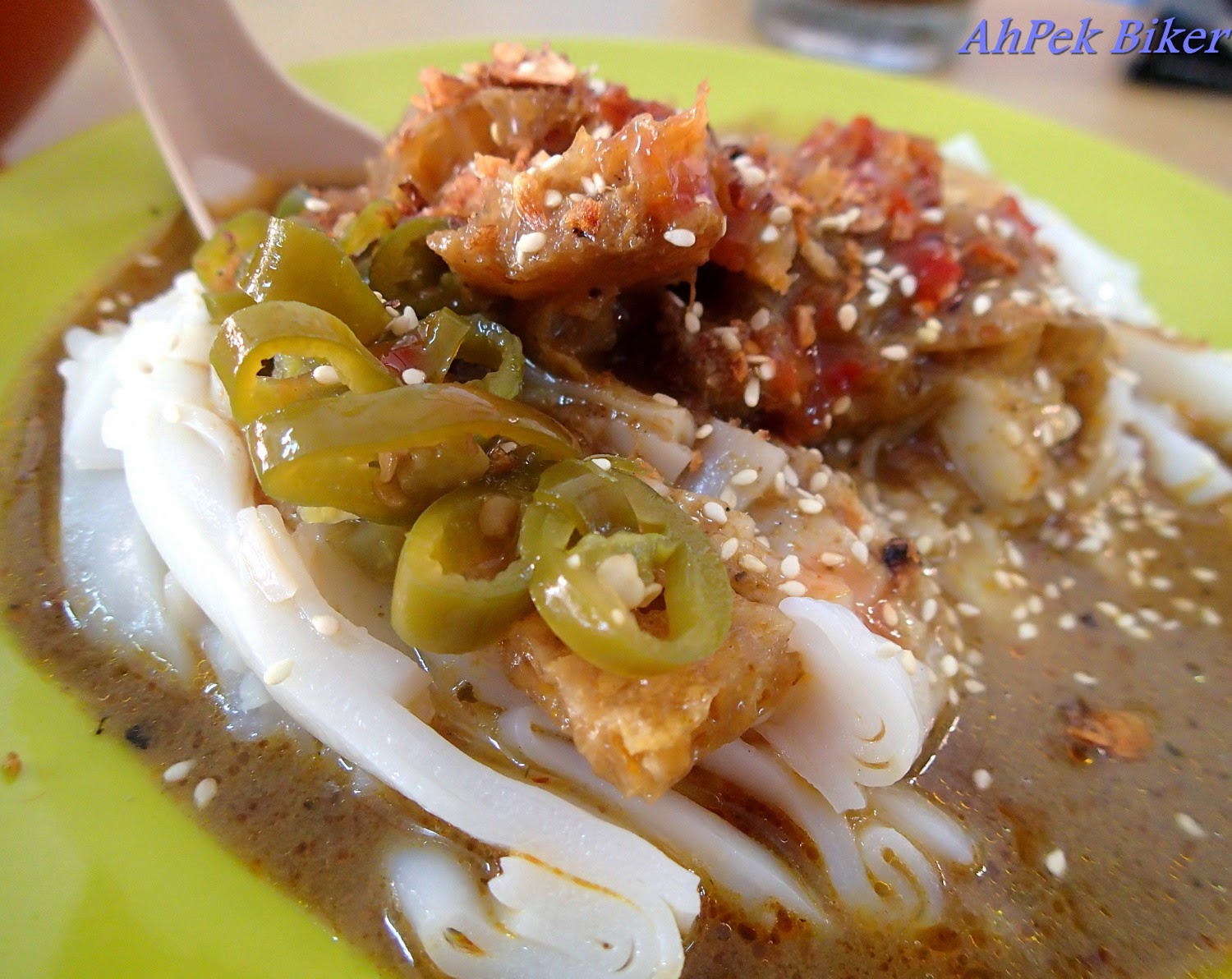 A few of us decided to surprise them. We had posted a "Maybe" in the event page, took an earlier ETS Train up to Ipoh.
Upon arriving in Ipoh, we rode towards our lodgings for the night - the Shangg Hotel. En route we stopped by for some eats, like this Curry Chee Cheong Fun that came with shredded dried prawns and slices of pickled green chillies (that's the Perak style of eating Chee Cheong Fun, with pickled chillies). 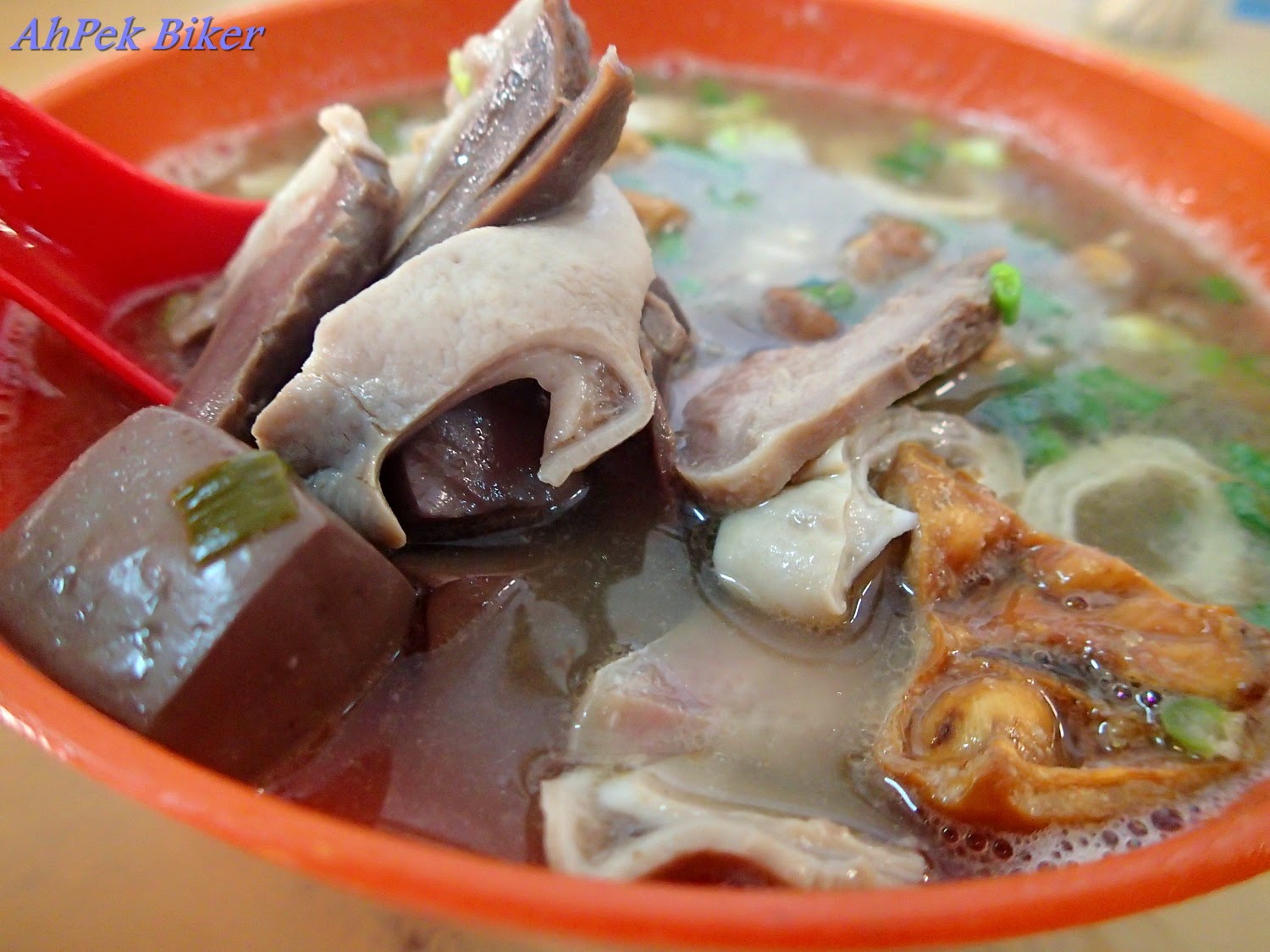 And to go with the Chee Cheong Fun, we had this Pig's Tripe Soup which had pig's tongue, intestine, stomach and even coagulated pig's blood. Some of you all may say "urghhhh!". But, really, it's a tasty soup full of flavour that has seeped out from the ingredients during the cooking. 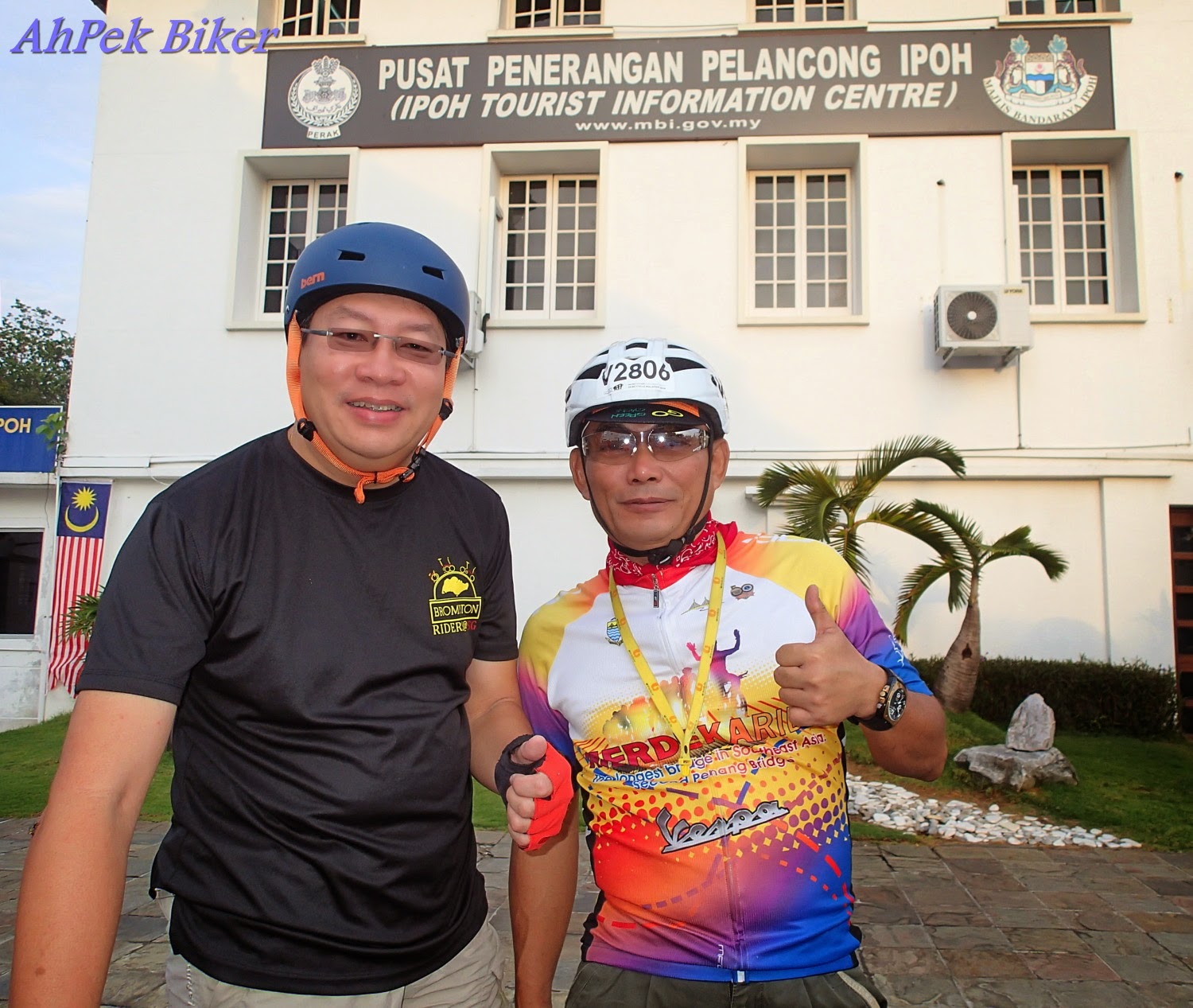 We checked into the Shangg Hotel, and refreshed ourselves. Later as we were about to leave to surprise the rest of the gang, who did we see at the lobby but Patrick, a local cyclist friend. Kong had contacted him to be our cyclist tour guide while in Ipoh. He had driven here with his bike packed in his car and would be riding from the hotel to the Ipoh Train Station; I guessed he was as surprised to meet us and was glad to have company riding to the station. 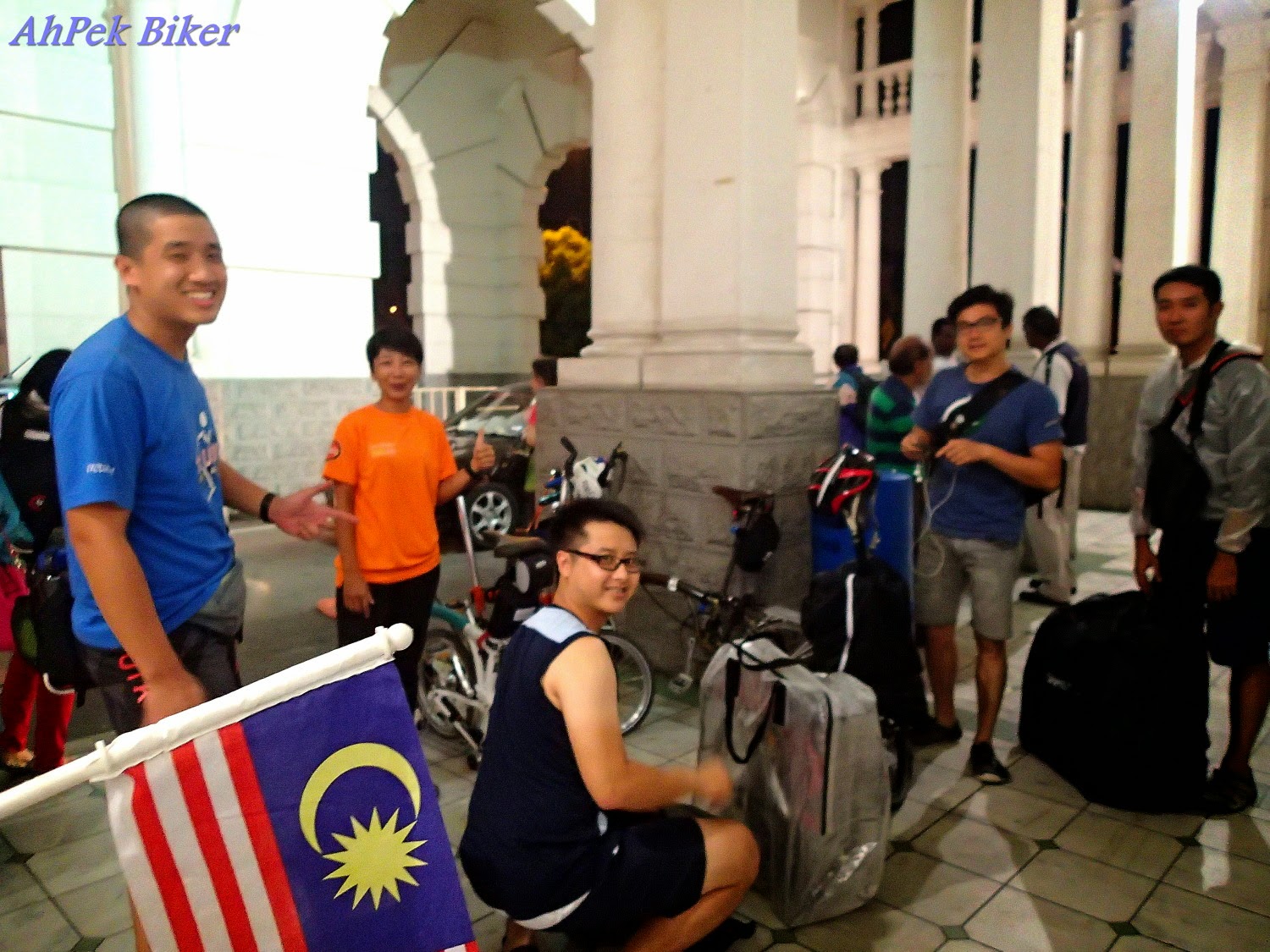 8:30 pm - The "rest" of the gang arrived, uncharacteristically the train was a bit late. Coming in was also Dominique, a French man based in Singapore, who had come up from the southern island to join us. "Surprise!" and were they happy to see us there too.
I say the "rest" of the gang as our group was not complete yet. Due to working hours constrain, another few will be arriving on a later train. 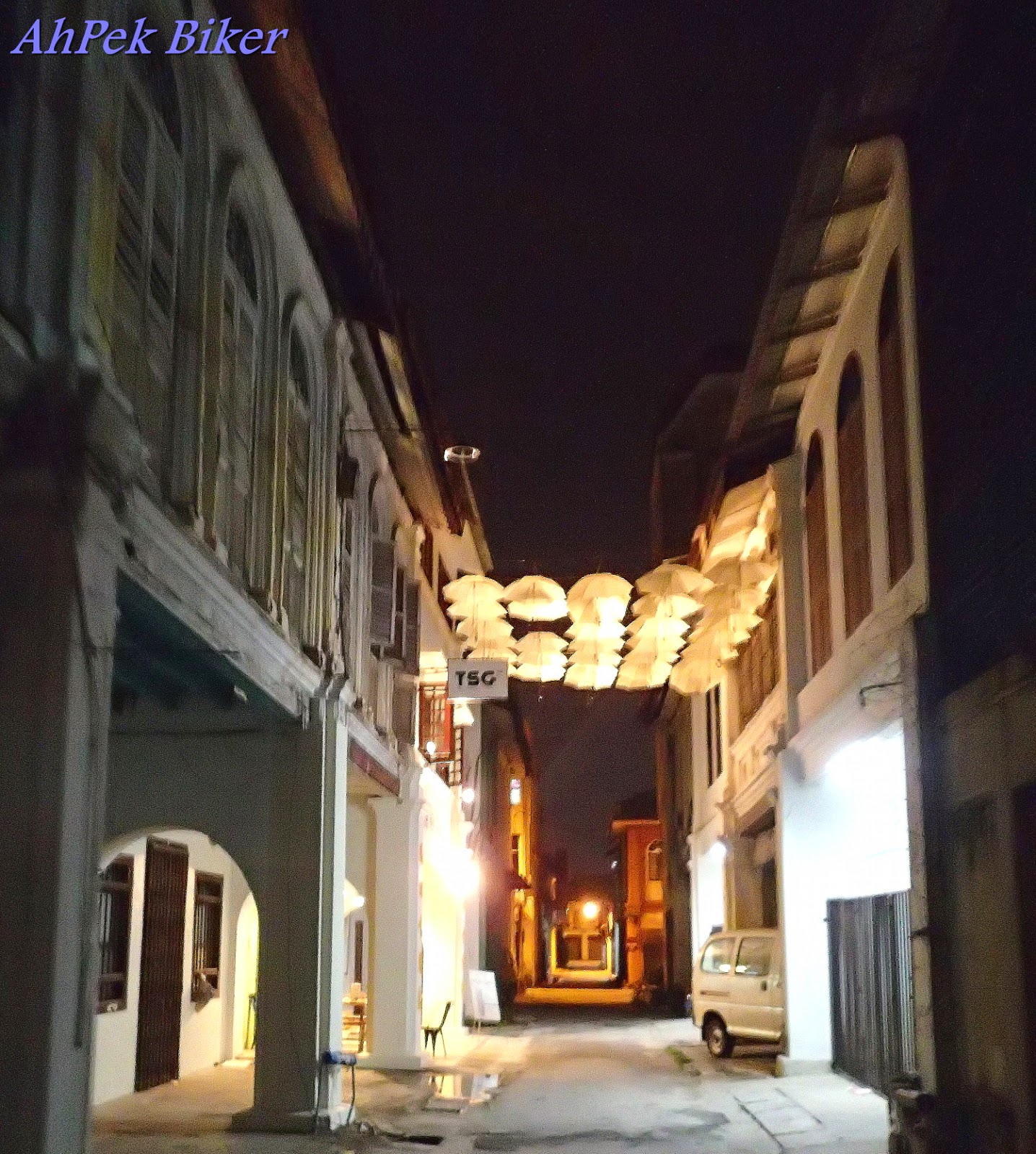 Cycling at the old town part of Ipoh is cosy, and we did just that - went for a slow and cooling bike stroll along the roads and alleys. Many of the alleys have been spruced up and some even lit up by businesses that operates from this alleys. 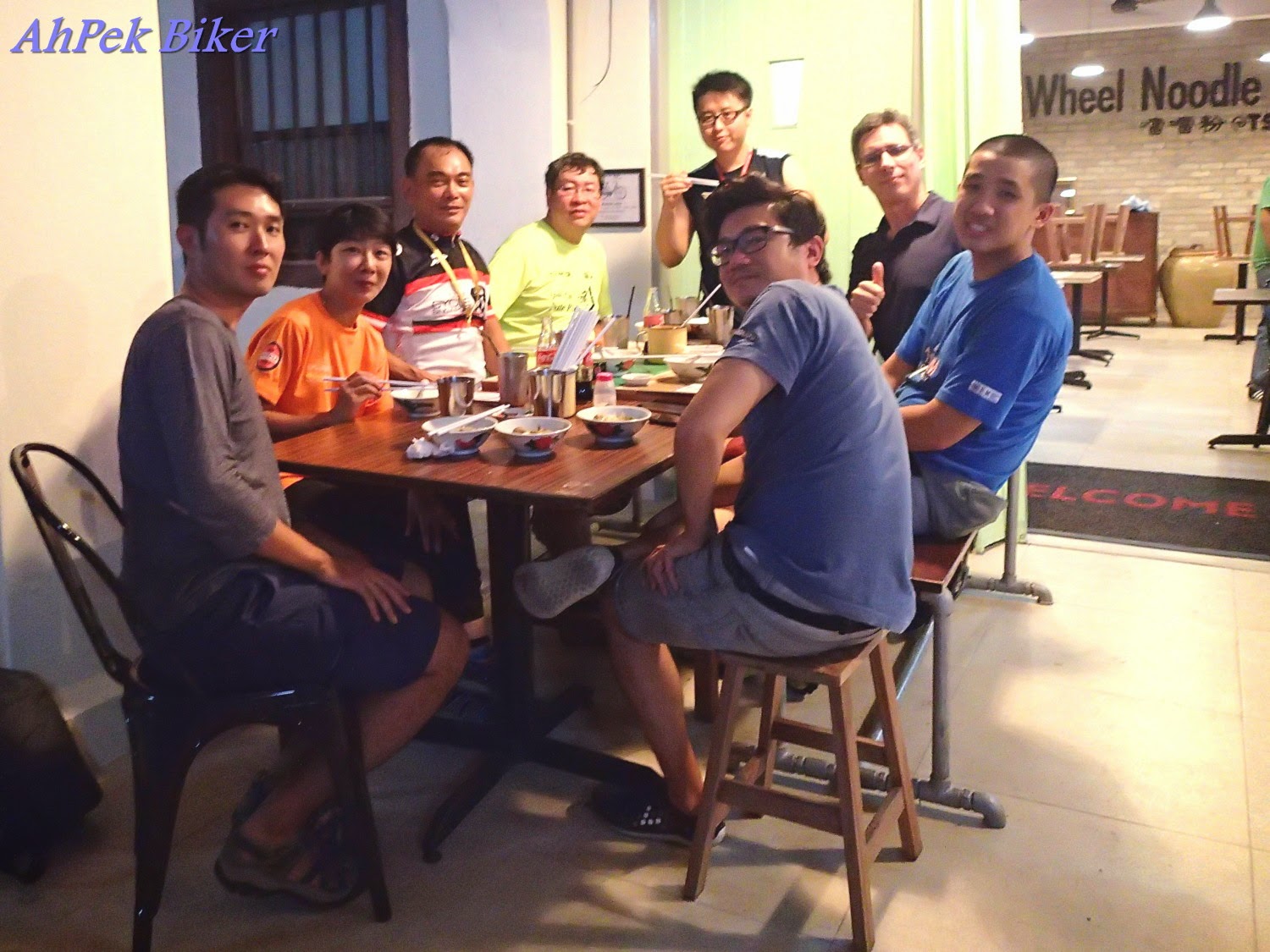 We popped into one such establishment for a quick bite - the Wheel Noodles at Jalan Market. 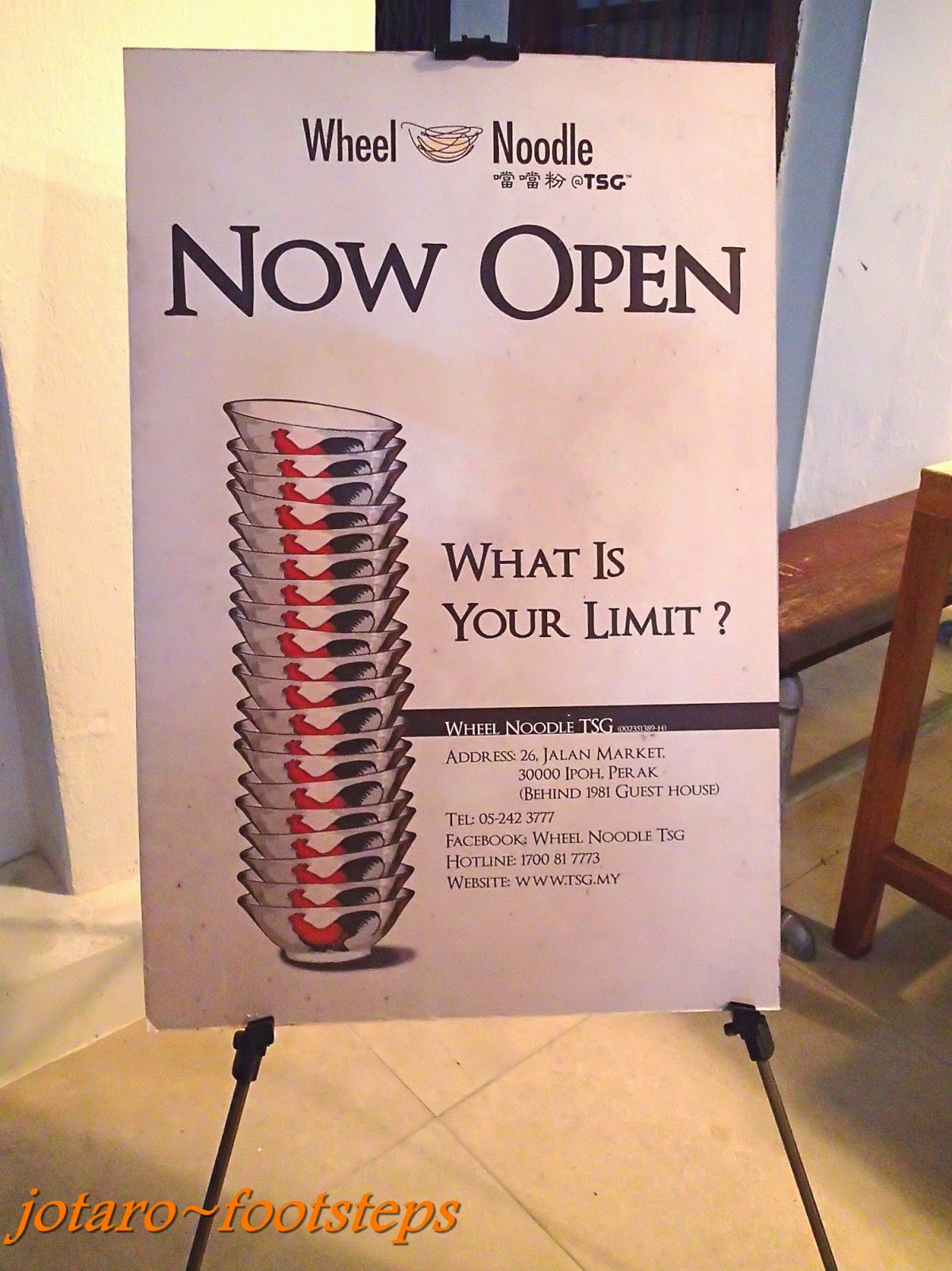 Wheel Noodles have an interesting concept. They sell their noodles in small bowls, each bowl probably having two mouthfuls of noodles. So one have to eat a fair now of bowls to be sated; their question to patrons is - "What Is Your Limit?" 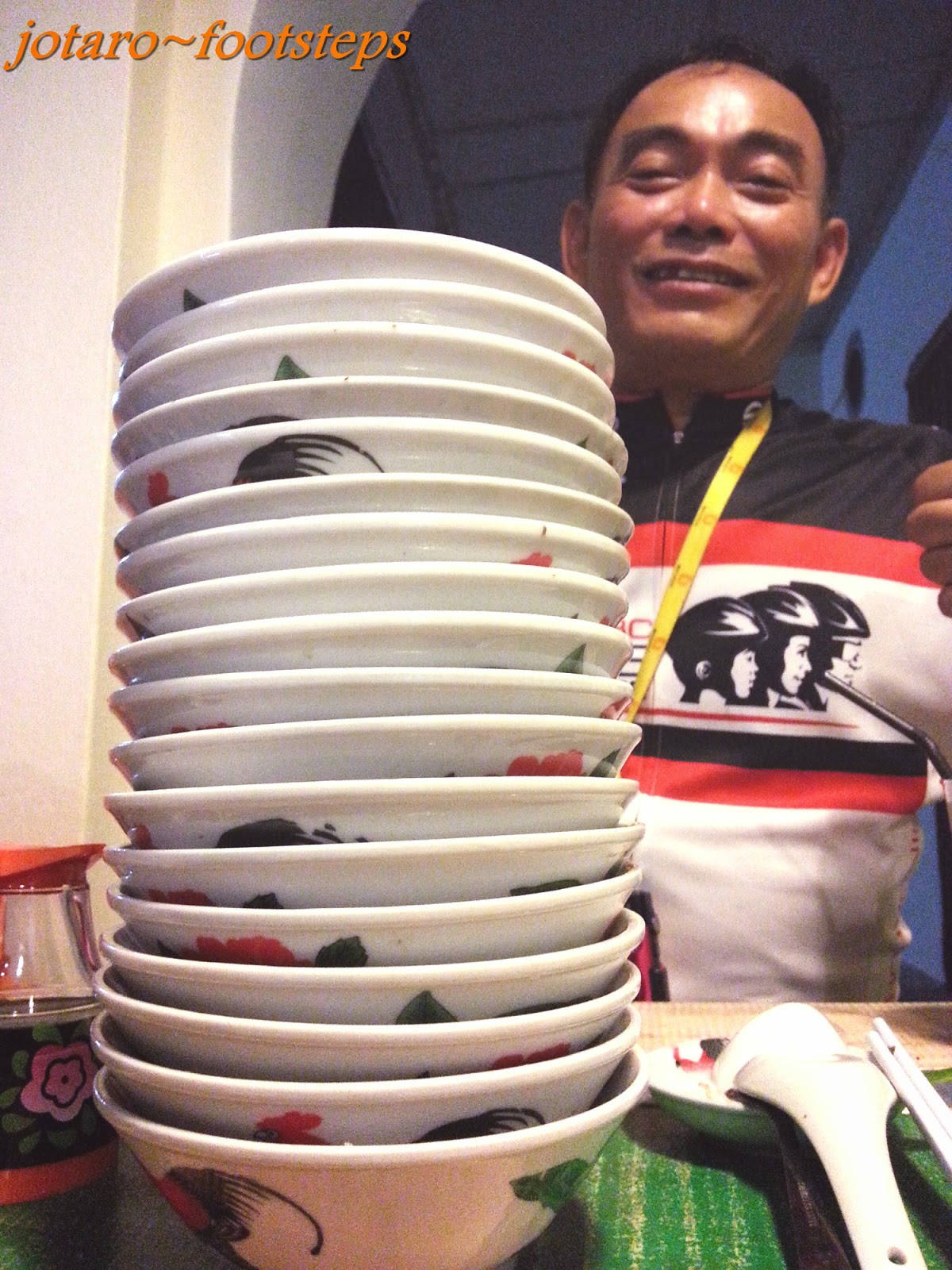 Actually we arrive there just as they were closing the shop, a polite request from us and they remained opened just to serve us.
We did not go for the limit eating challenge, just ate comfortably as this was only a teaser eats for the REAL eats later on (... read more of Wheel Noodle). 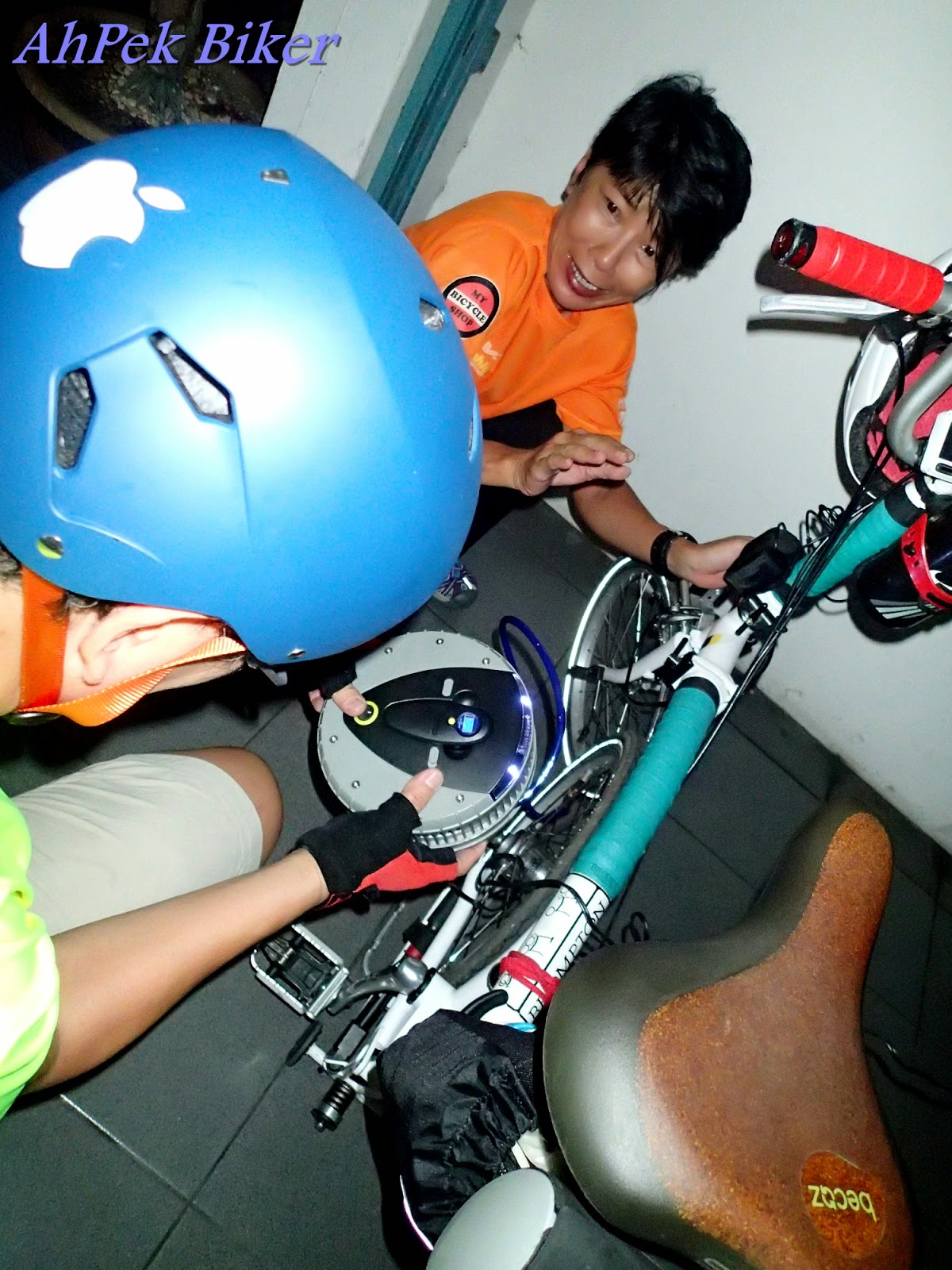 Back at the hotel, while the rest were checking in, Patrick helped pump up Kim's tire which was a bit low on pressure. He used a nifty gadget which he carries around in his car - it's an electric pump that can be powered by the car's cigarette lighter. 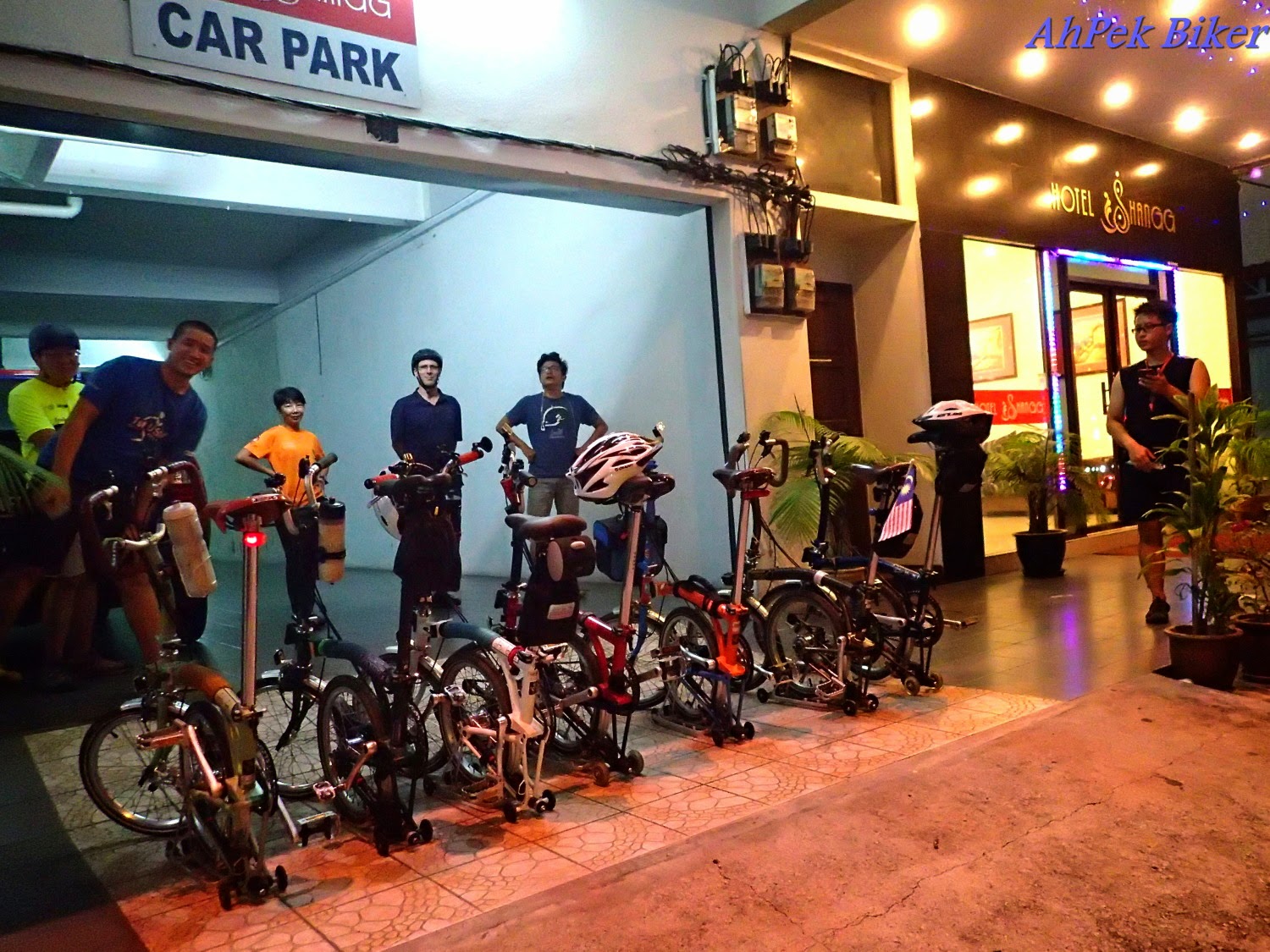 Our bikes lined up in front of Shangg Hotel, eager to go.
The good thing about Shangg is that, although rooms are on the upper floors, it has a large store room at the ground floor rear to put our bikes. And the rates are reasonable too - at RM70/- per room per night. 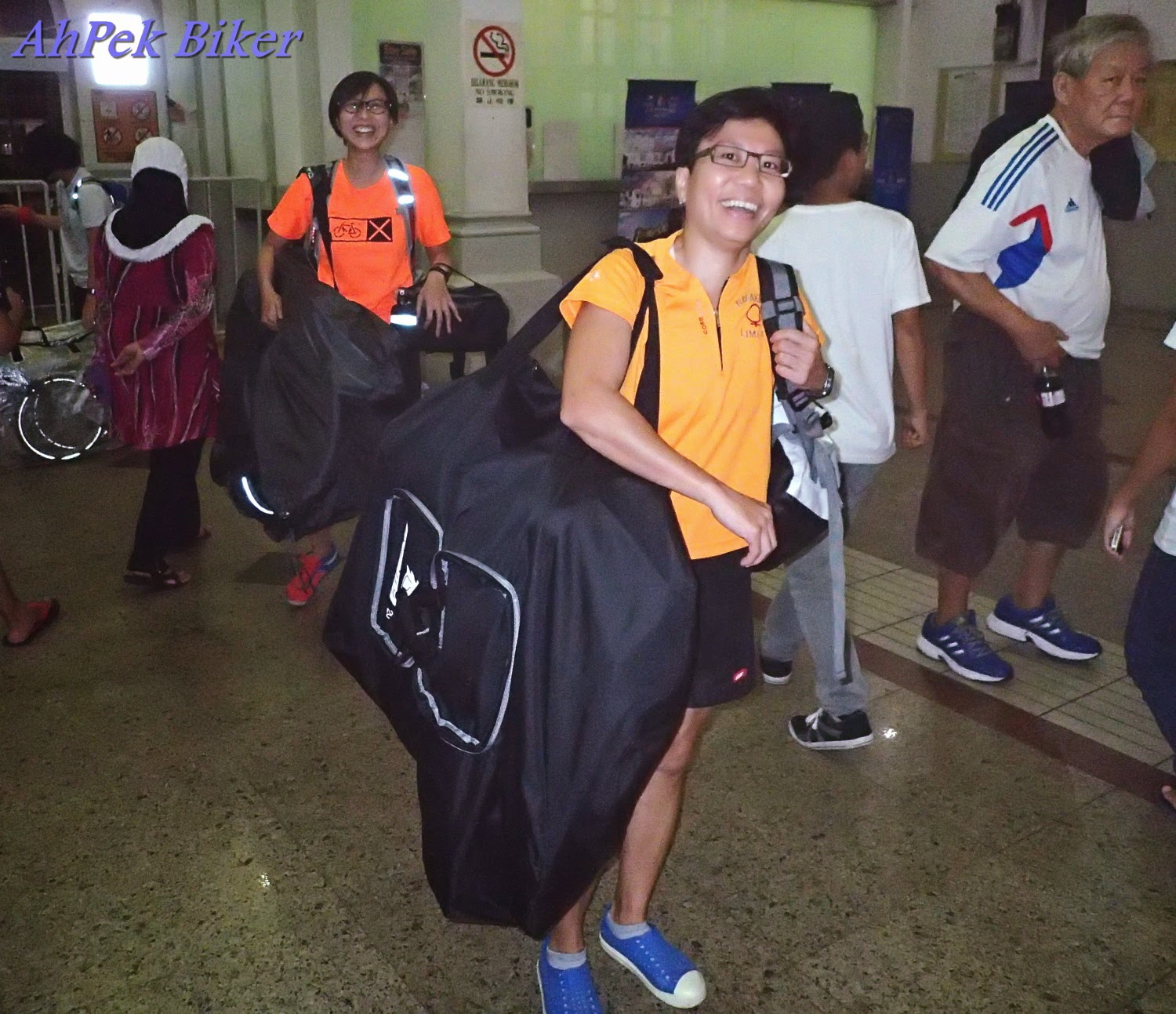 10:20pm - We are back at the Ipoh Railway Station to meet our other friends who took the later train. Our group is almost complete now, a few more will be meeting us tomorrow en route. 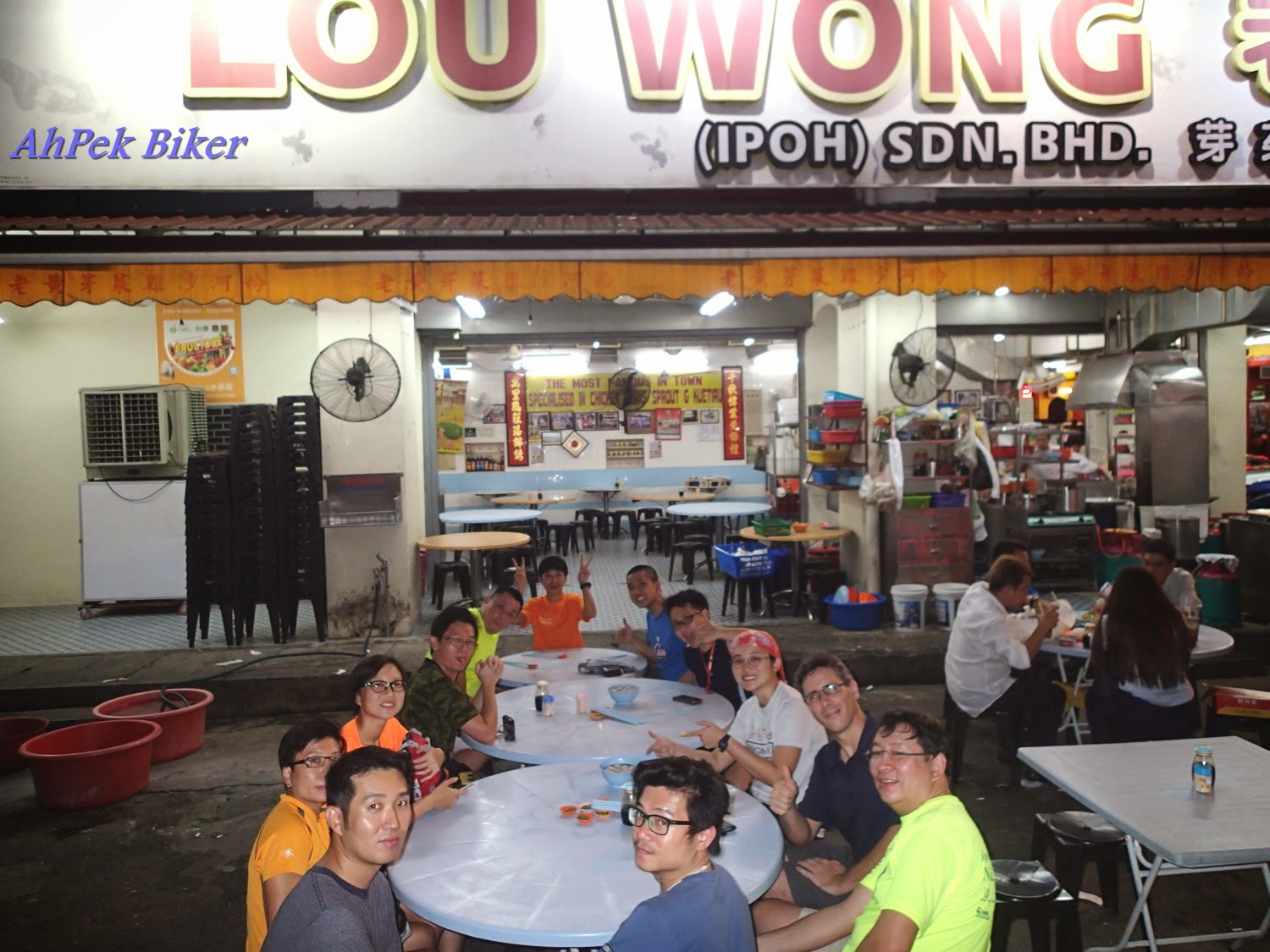 A quick ride and we are at the renown Lou Wong Nga Choy Kai Restaurant at the new town section of Ipoh City.
Now, you must be wondering what's this about old town and new town of the city. It's the way the locals refer to the centre of the city, the spot where the city started. Divided by the Kinta River, both parts are actually quite old. Old town on the west side of the river is probably where people settled in first. 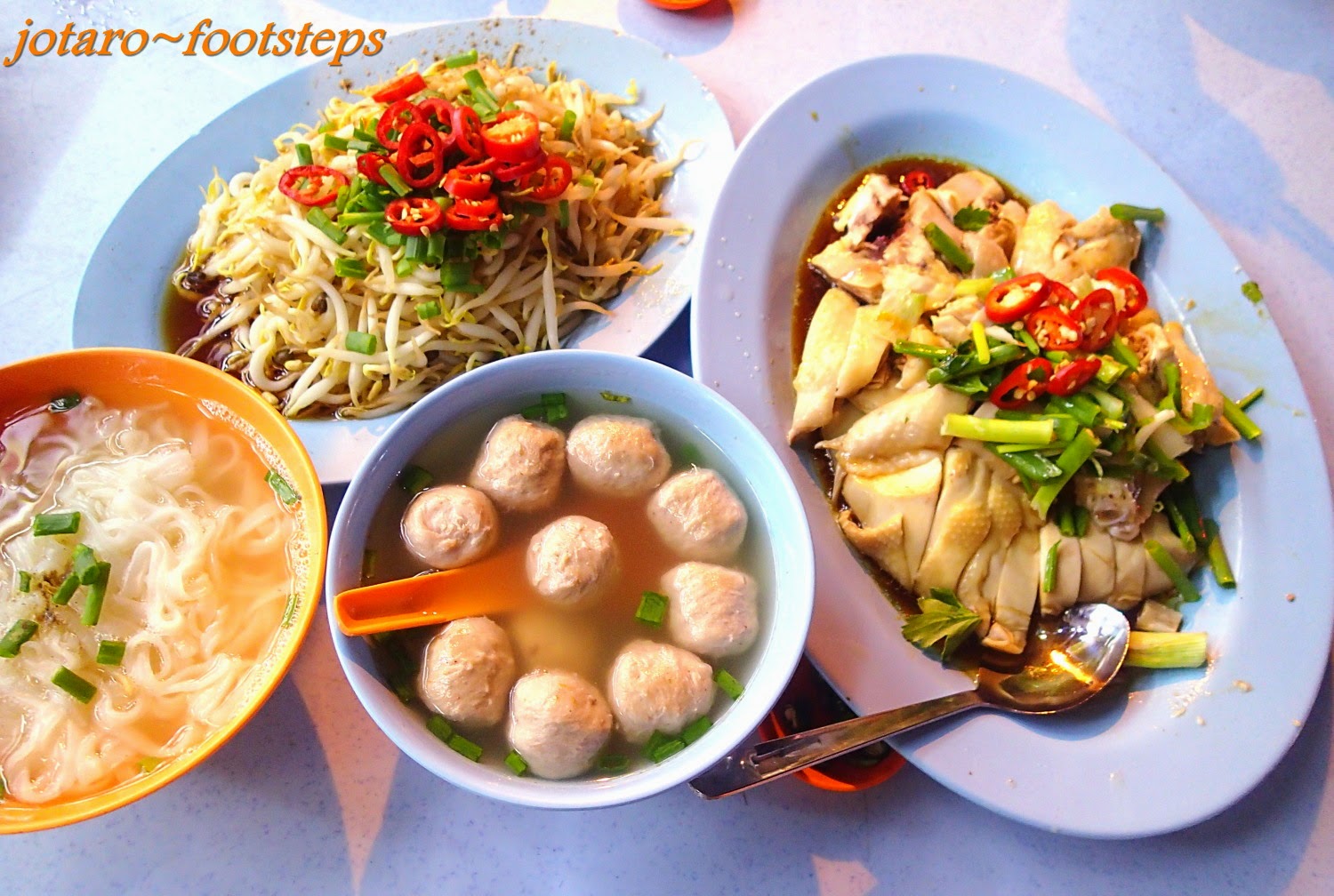 This will be our main meal, a bit late no doubt but we had bites earlier; it's more for our later group of friends to fill up for the following day's ride to Teluk Intan.
And it was a good meal of Keow Teow soup, Pork Balls soup, Pak Cham Kai (Steamed white chicken) and of course Ipoh's renown crunchy Nga Choy (bean sprouts). 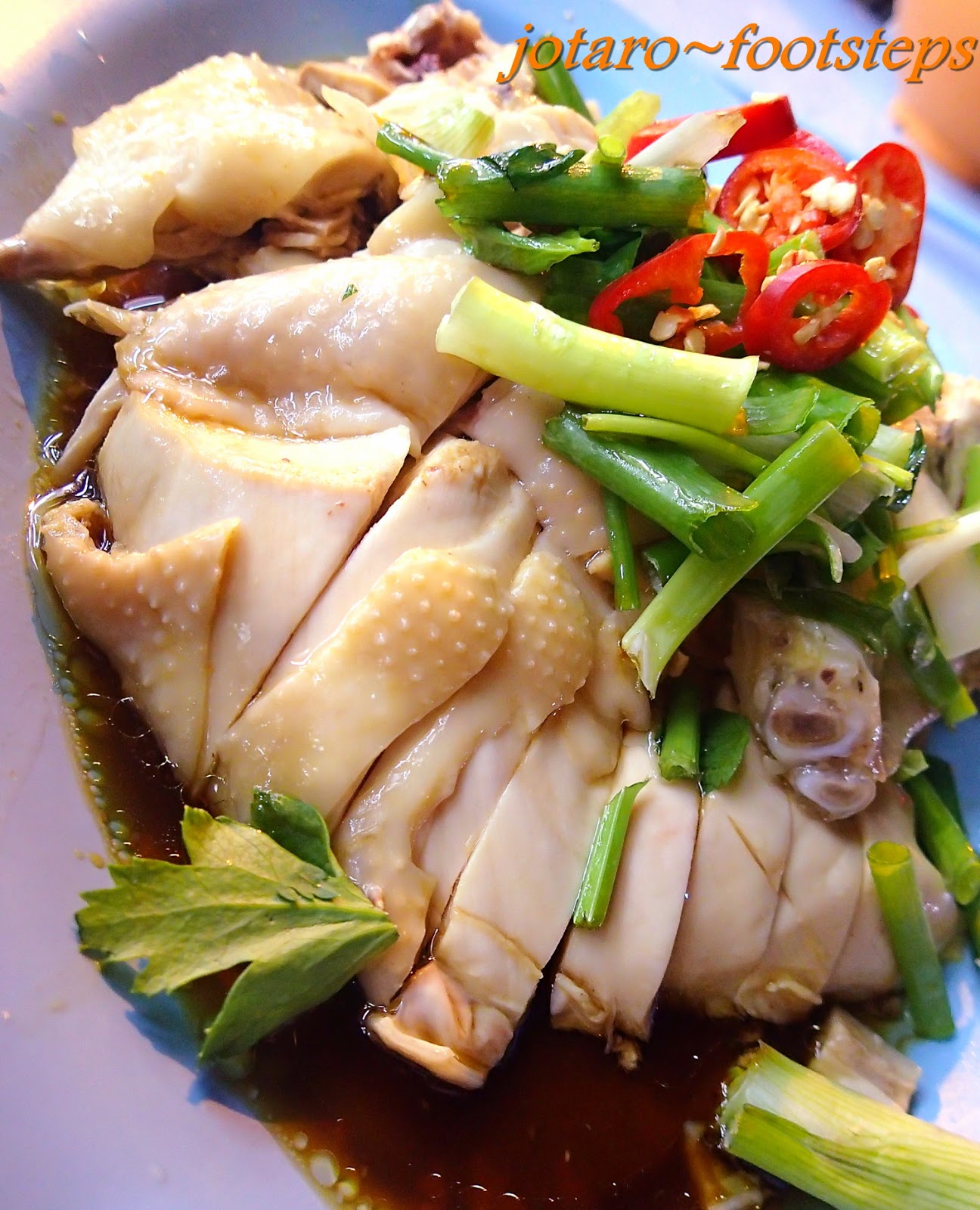 Wow! This plate of chicken does look good; and we whacked two plates of these!
What can I say, cycling does work up one's appetite - we will sure be ready for tomorrow's ride (... read more of Lou Wong's Nga Chow Kai).